The top ﬂoor of a historical building, an old storeroom with e recent wooden ceiling. A free rectangular space at  ﬂoor level and ﬁve arched window overlooking the square. The client was to create an open space bright and  light, loft style / New York. A totally white surface, a tray where the client can place their loved belongings. Photos by by Fabio Gianoli 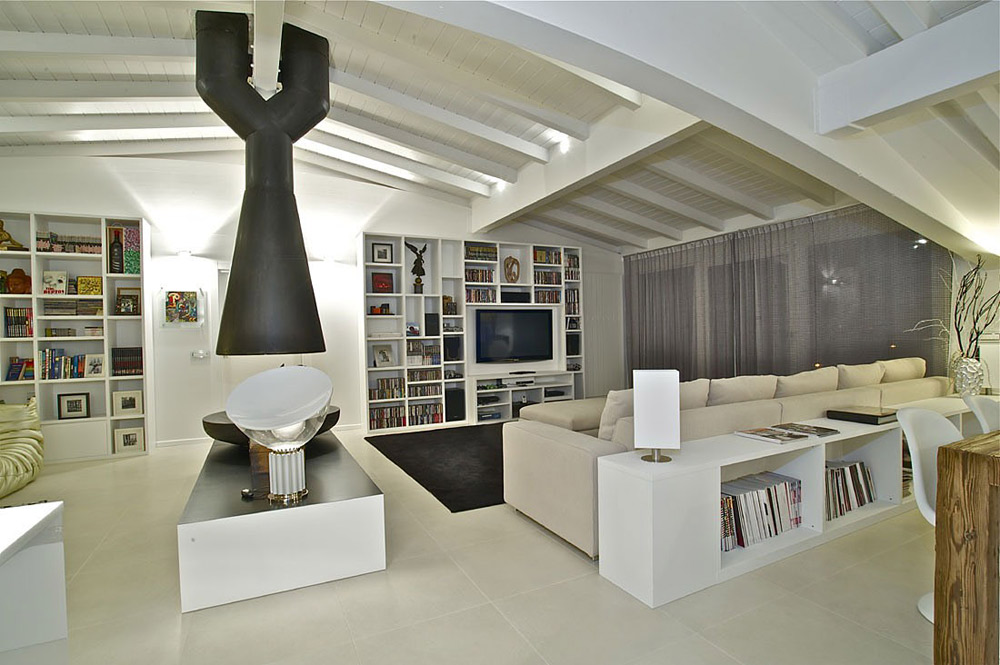 The ﬂoor plan was divided into symmetrical zones using both partitioning walls and furniture. All was planned around a suspender ﬁre place made of natural metal sheet. This ﬁre place unites the kitchen area with the central isle – the dining area with a high quality wooden table – the tv zone – the reading and relax area wich is characterized by a small coffe table made out of an old car engine that belonged to the client. The day zone enjoys two fantastics views both from the ﬁve arched windows and also the the large sliding window on the sofa side wich leads to a balcony that accomodates a winter garden. There has been furnished with both objects of modern design and vintage pieces, such as an old Mac to an old phone, restored cast iron radiators, collection of movies and comics, in addition to numerous souvenirs from various trips. On the opposite side over the living area is the sleeping zone characterized by a wooden ﬂoor. Two symmetrical bedrooms are onnected by a central corridor with mirror closet for shoes and the master bathroom. This too has been symmetrically divided in two zone with washbasins and a central mosaic wall with a ‘Marilyn’ up on divides the toilet area from the big shower zone with double free access. The two bedroom follow the the format of the rest of the house ; characterized by three ﬂoor level little windows in the main bedroom an illuminated wall brings light to the room and moved from the far end of the room the king size bed.