Westcliff Pavilion project was designed by GASS Architecture and is located on the Westcliff Ridge in Johannesburg, South Africa. 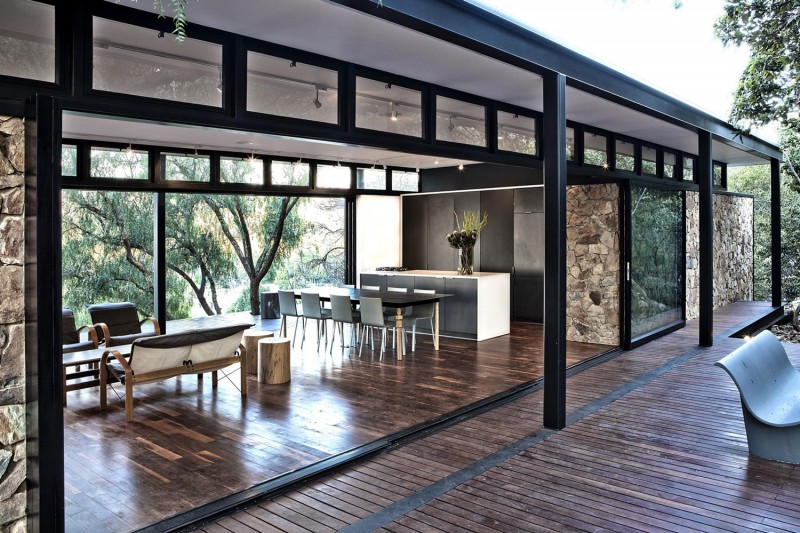 The cottage at 28A Pallinghurst is a steel-framed pavilion structure located on the Westcliff Ridge in Johannesburg, South Africa. This 2 bedroom dwelling, nestled away in its wooded surroundings, is positioned just before the inception of a major sheer face of the Westcliff Ridge. This affords the building a private, tranquil hiding place in the trees juxtaposed with a feeling of floating above the ridge combined with magnificent views of Johannesburg. 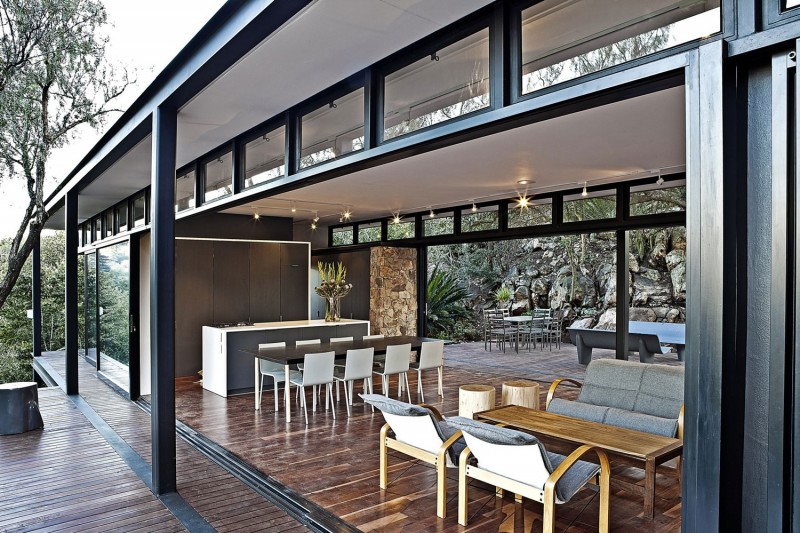 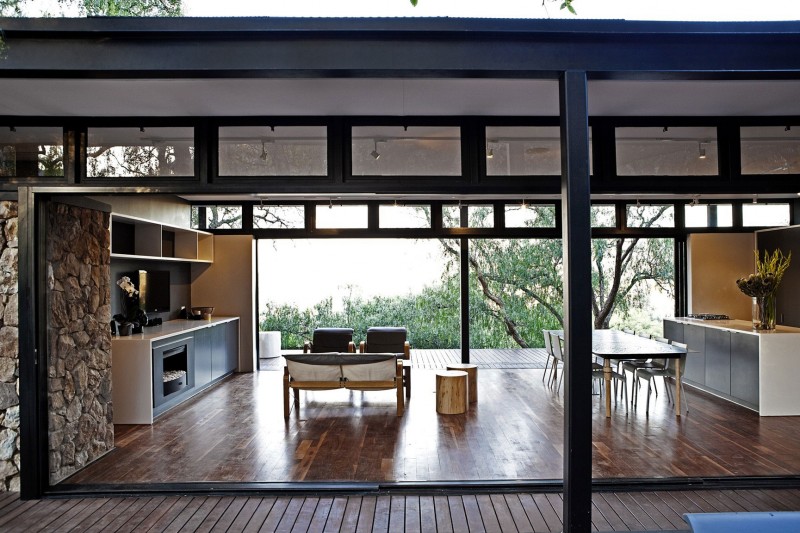 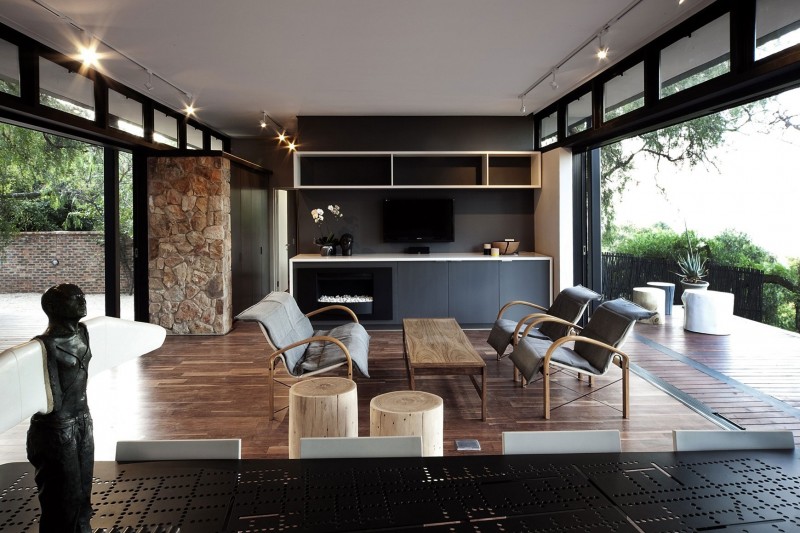 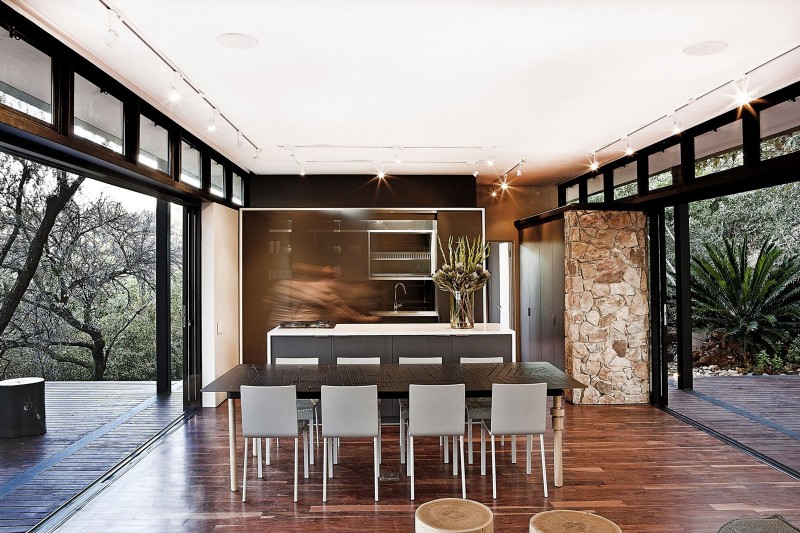 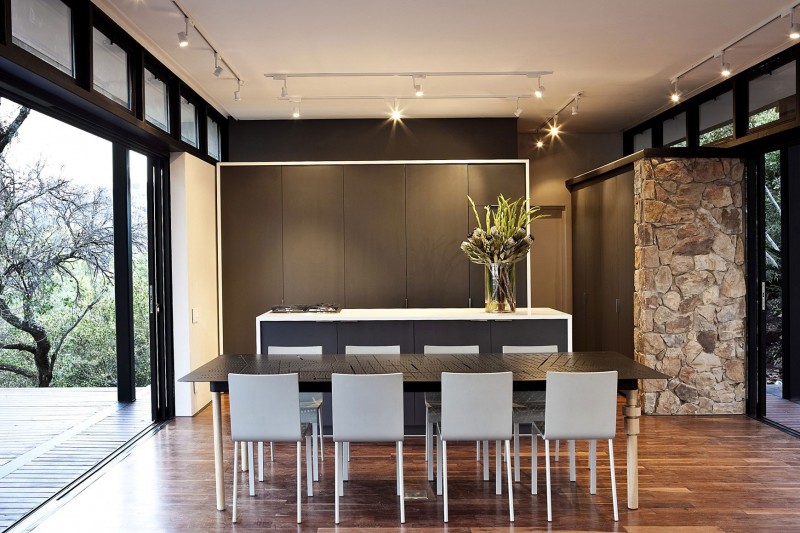 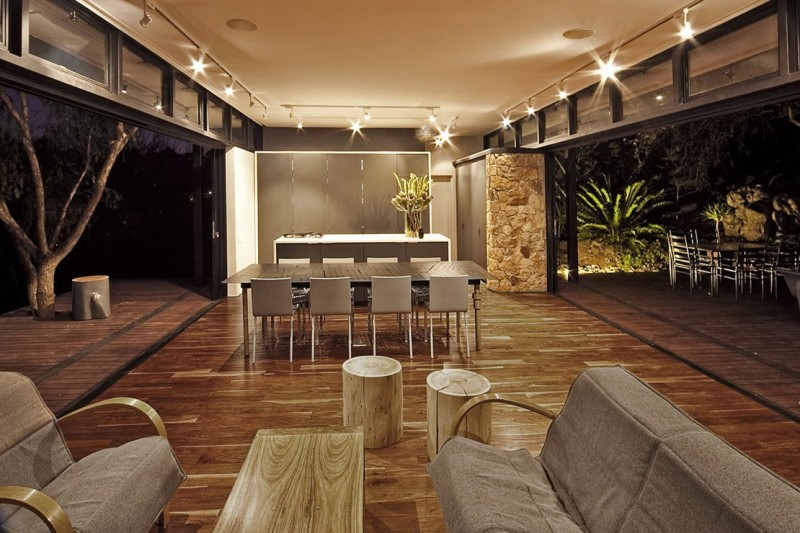 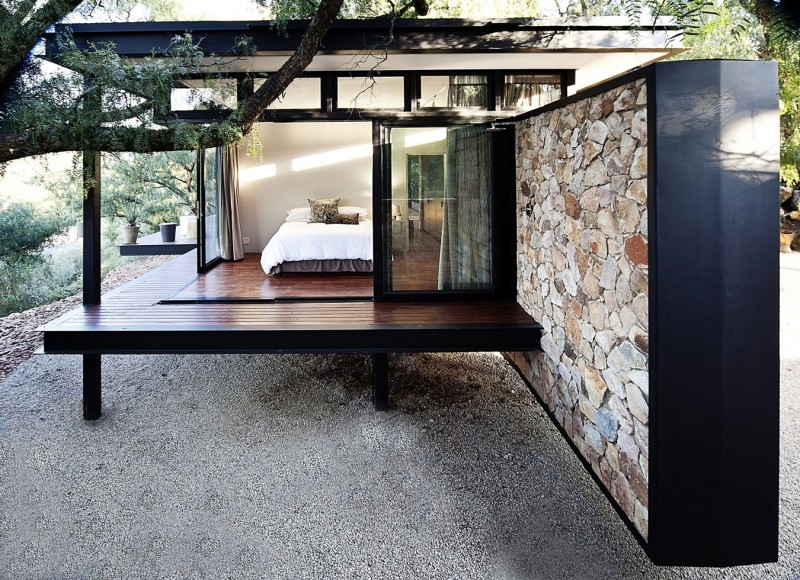 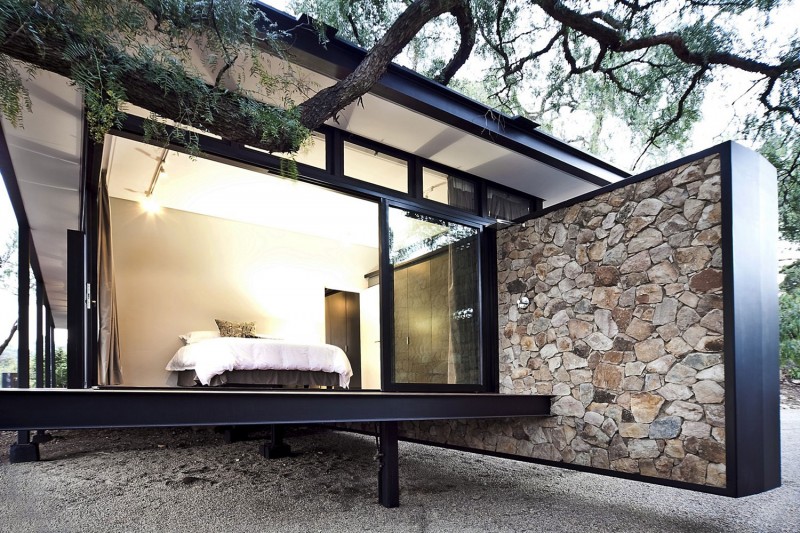 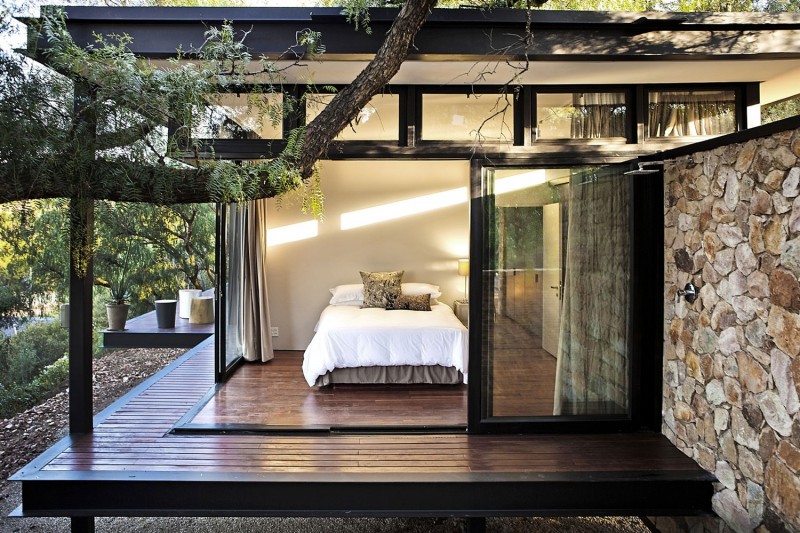 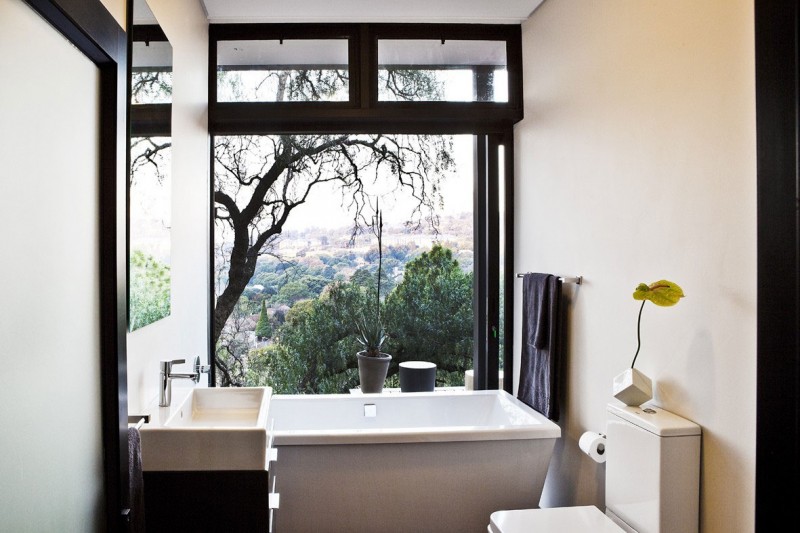 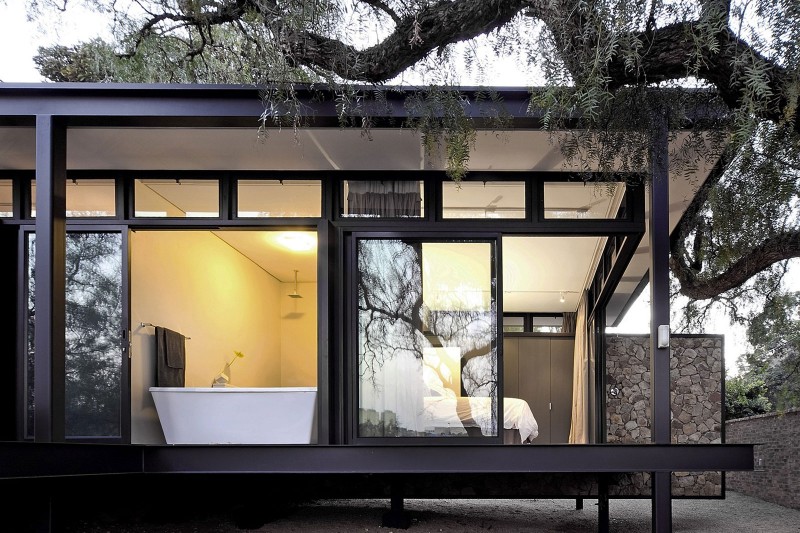 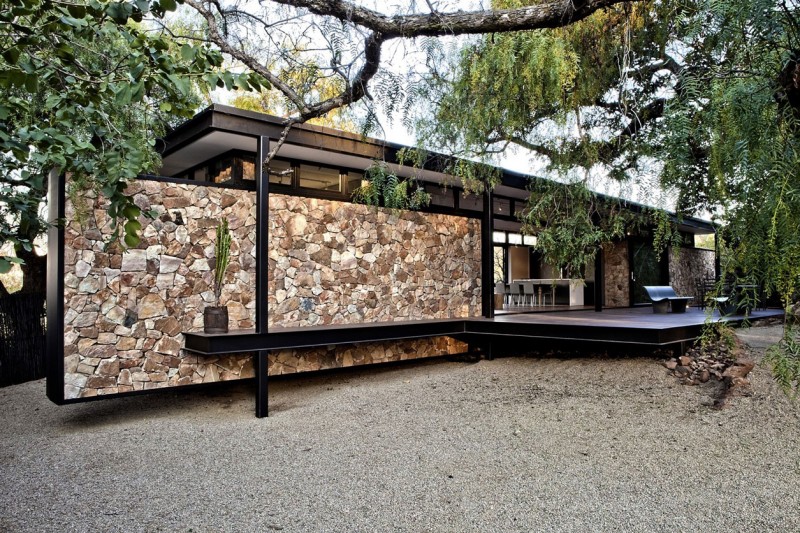 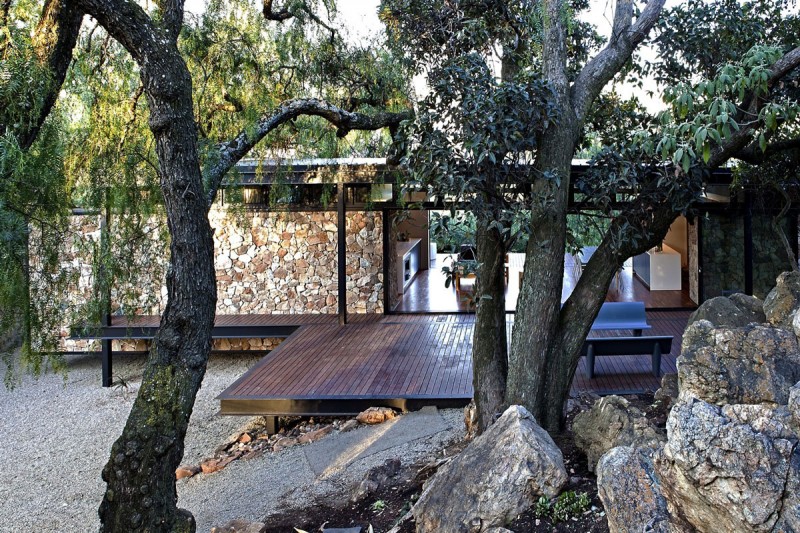 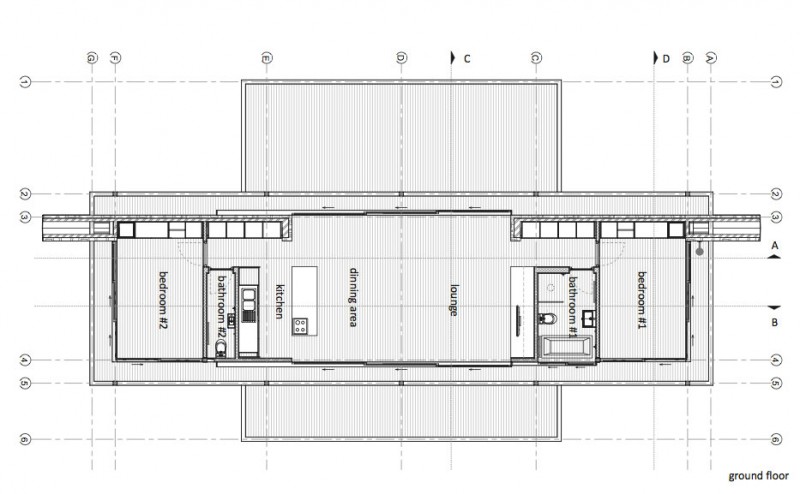 Steel framing was a natural choice of construction method, as it married the environmental and access requirements to the desired architectural aesthetic. Simply put, we wanted a structure that would touch the Ridge as lightly as possible combined with an elegant, timeless aesthetic that would allow us to use the steel elements not only as primary structural elements, but also as the primary architectural motif. From an environmental perspective, access to the site is quite complex, having to traverse down a very long, narrow driveway through several people’s private properties, and half way down to the ridge to the site itself over an existing garden. Because of this, we wanted to bring in as few construction vehicles as possible, especially large concrete trucks. Thus a steel framed structure seemed logistically the far easier method.

This also allowed the subcontractor to essentially build the structure off-site, and bring in a steel “kit of parts” and simply assemble them on the site itself. Also, the steel members could be hand carried down to the site from smaller trucks parked further up the ridge, impacting the site significantly less than either masonry or concrete would have. By using steel, the only disruption to the ground and the Ridge was for the footings of the main structural steel columns, leaving the majority of the environment untouched.

One of the main identifying features that advances this work beyond the scope of a simple modernist box is the floating stone wall. Many of the houses on the Westcliff Ridge and vicinity are famous for their use of native stone work in their facades, including works by architectural greats like Sir Herbert Baker. We wanted to continue in this tradition of using indigenous stone in our design and as such, we wanted included a wall made from stone harvested on the site itself. However, we wanted to give this wall a twist; something that would differentiate this wall from all other enclosures in Westcliff.

Thus we chose to turn the understanding of a solid wall on its head, to theoretically re-conceive what a wall actually is. Thus, we chose to dispose of this concept of sturdiness and solidity that is inherent in the historical understanding of a wall, and do the exact opposite: create something that does not rely on the ground at all for its founding. Thus we created a floating stone wall.