Apartment 11C is a project designed by Rado Rick Designers, the look of this flat in one of Bratislava’s trendy new residential projects was clearly predefined when first meeting the clients. 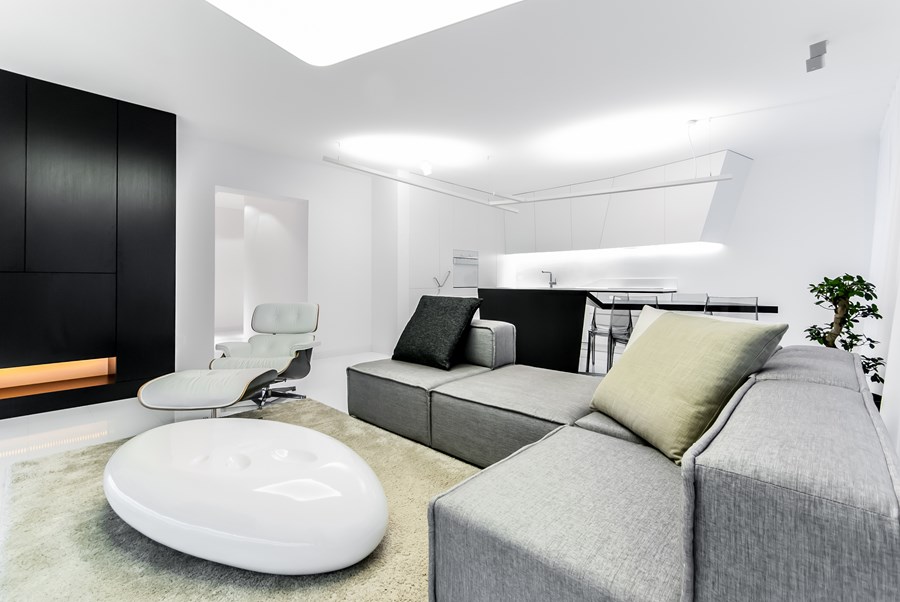 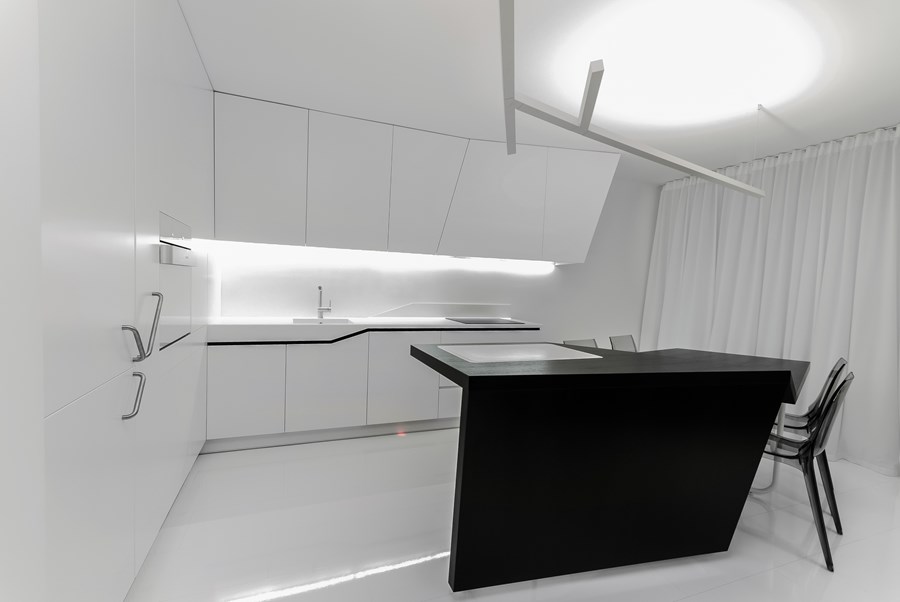 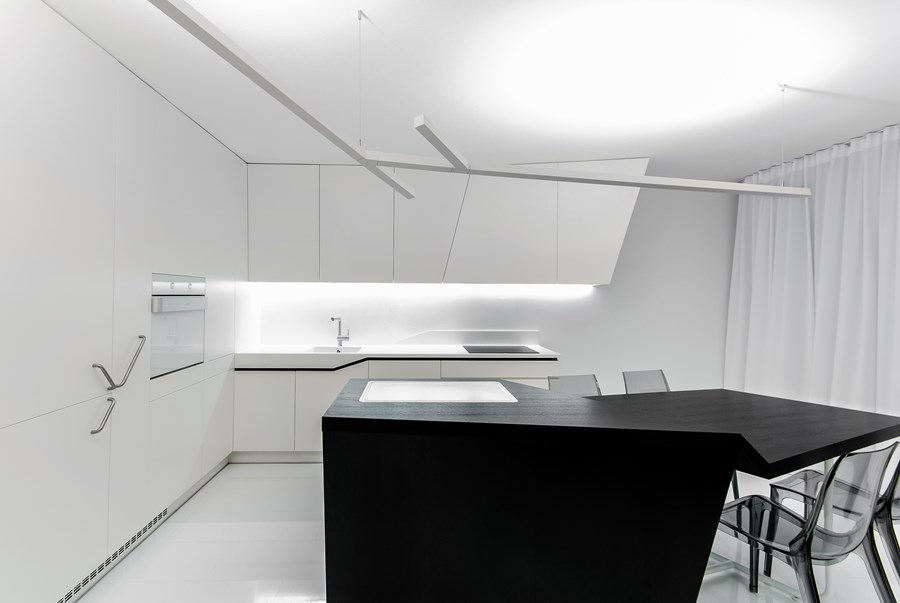 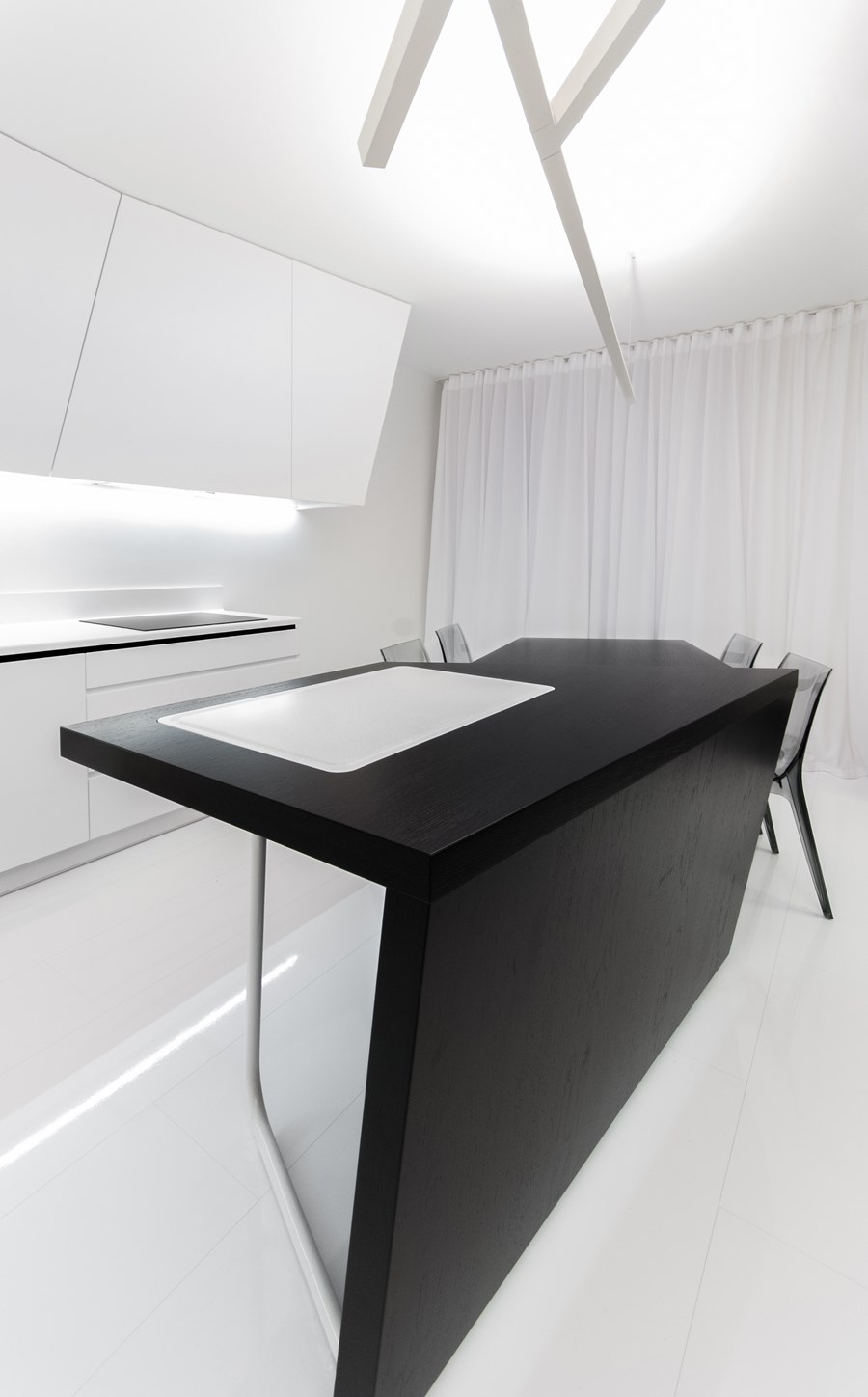 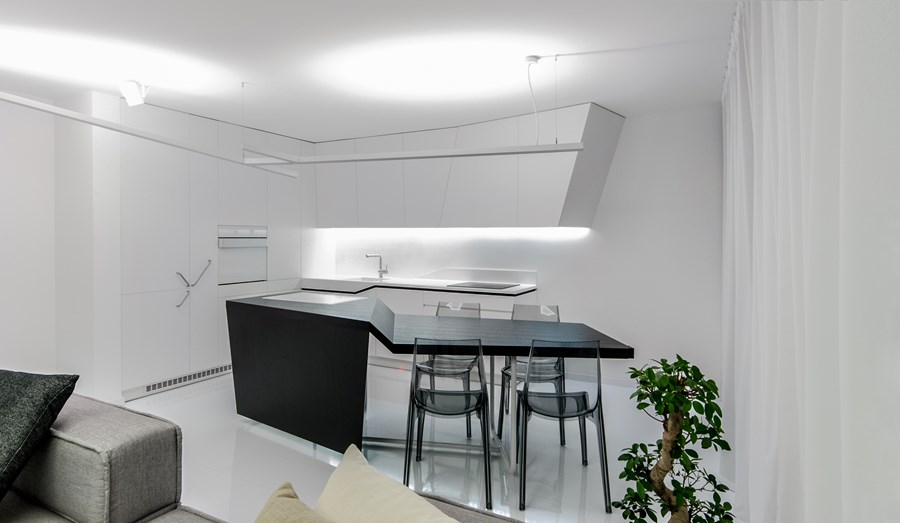 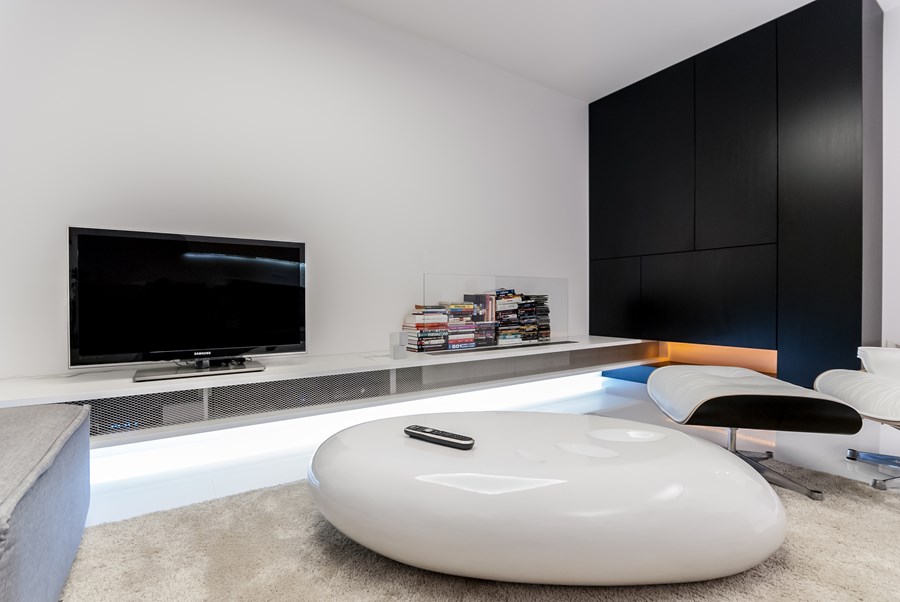 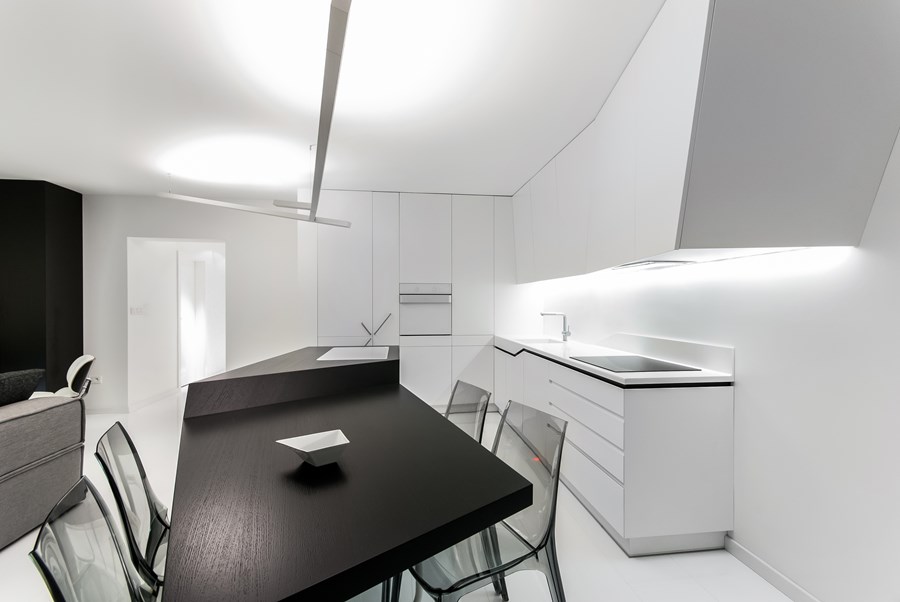 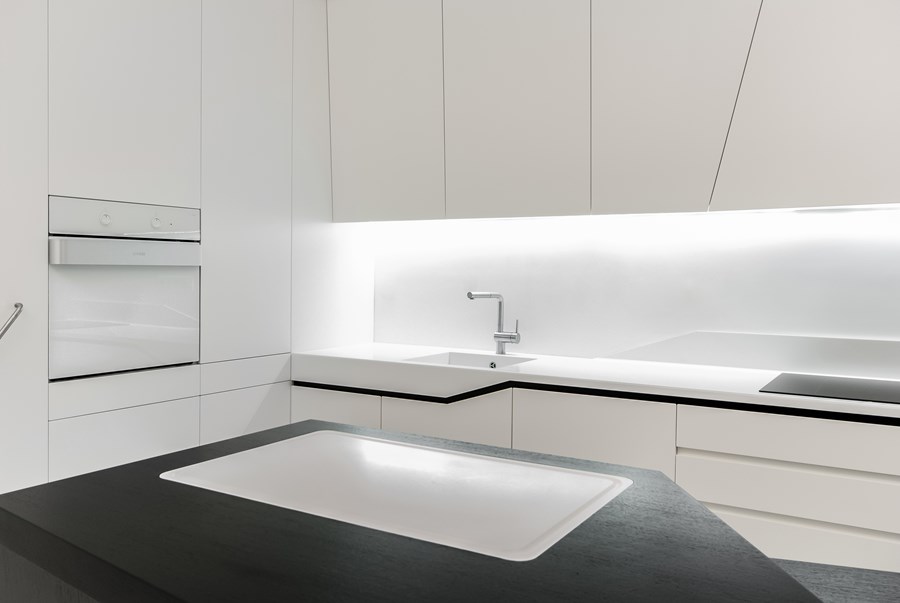 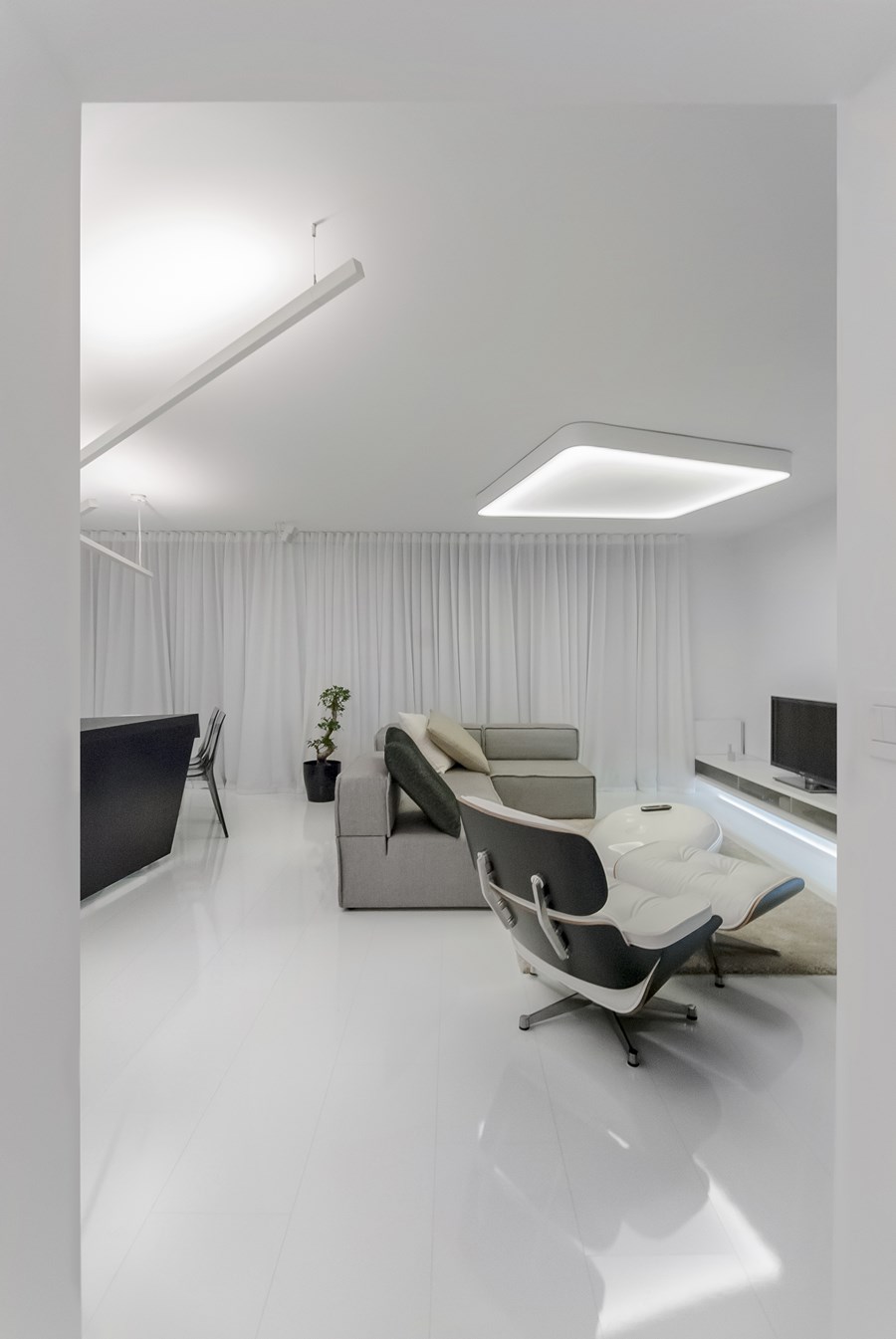 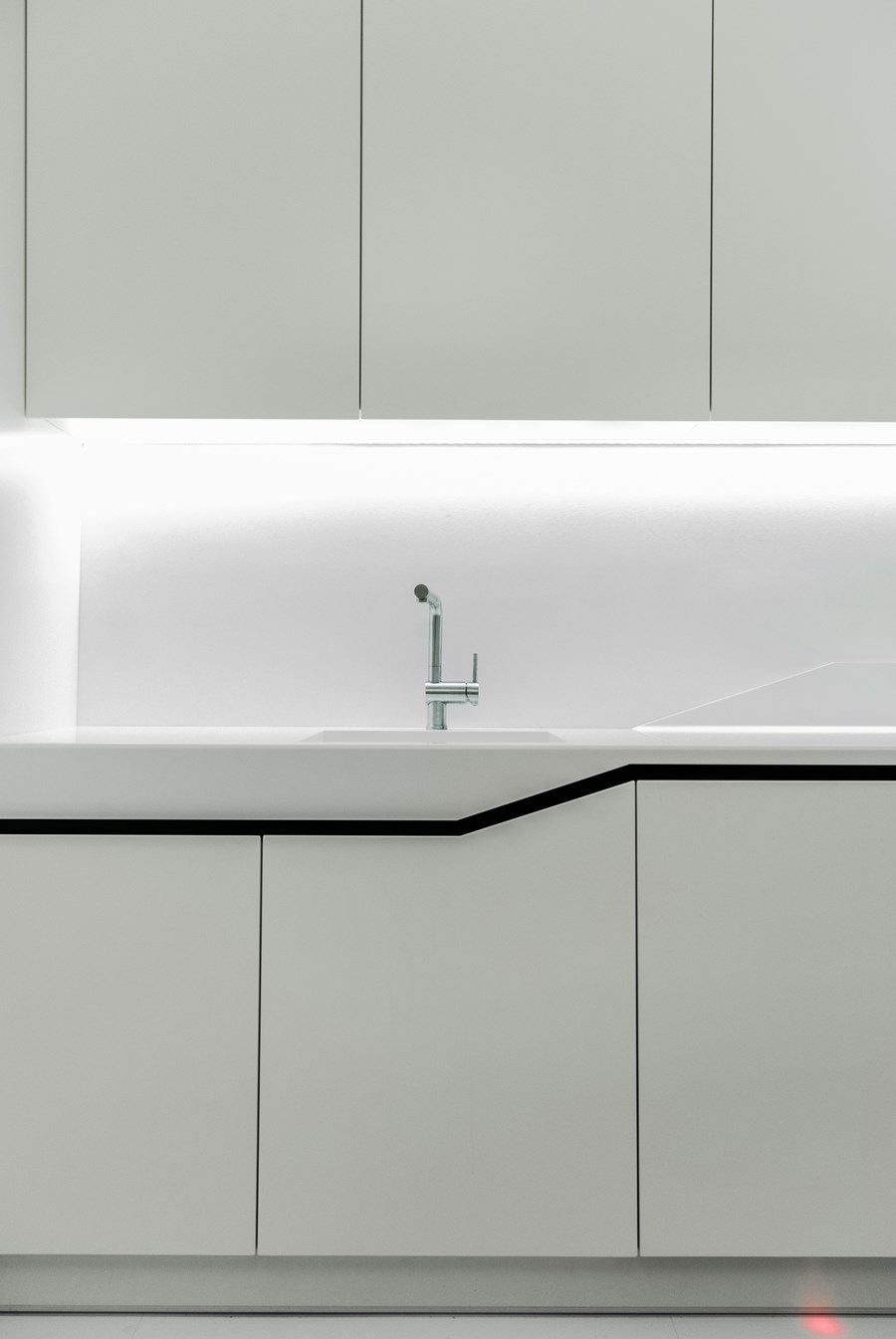 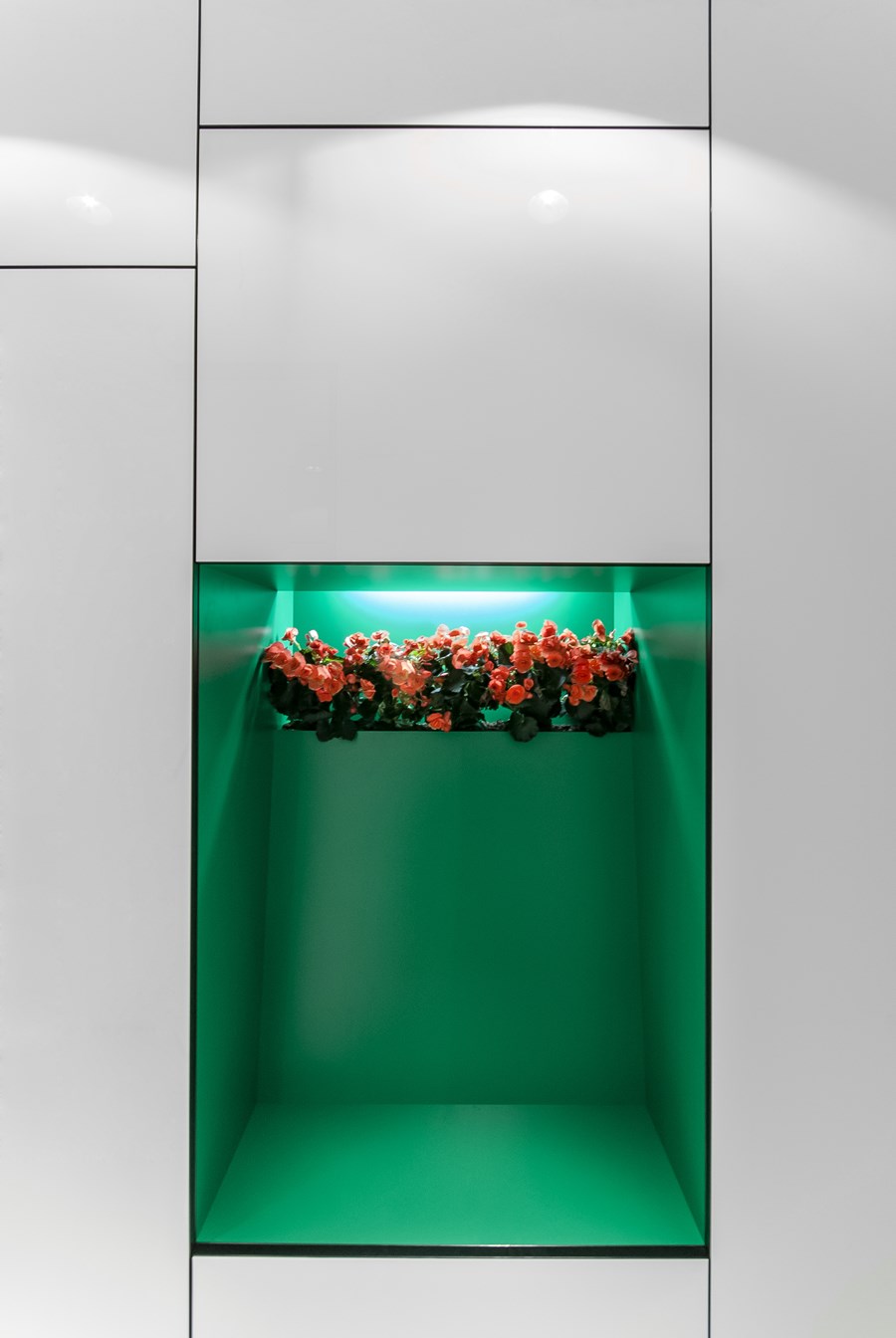 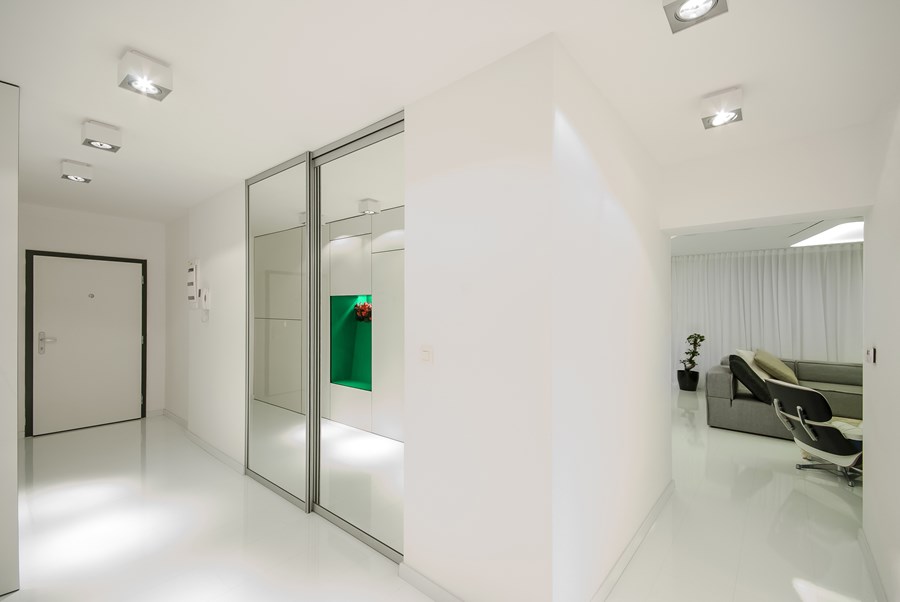 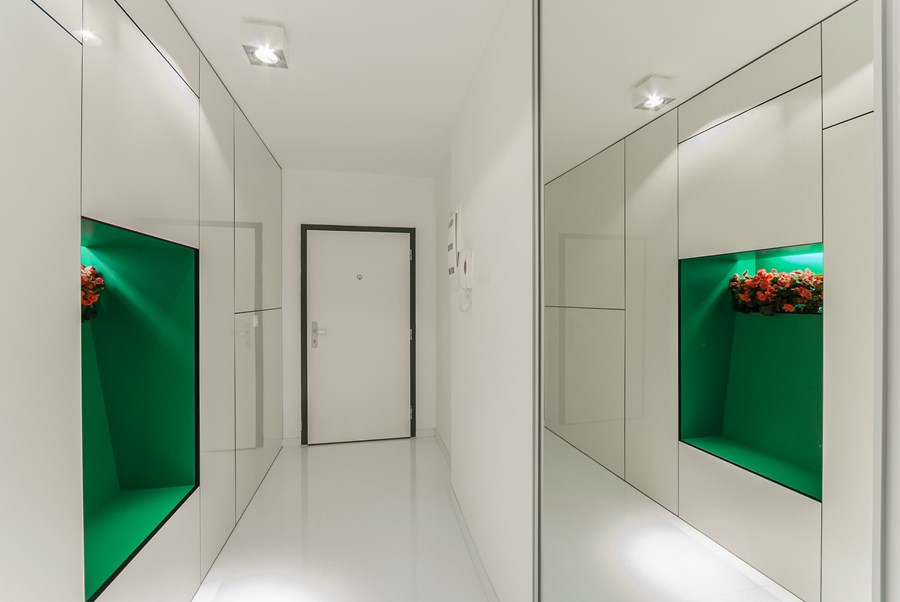 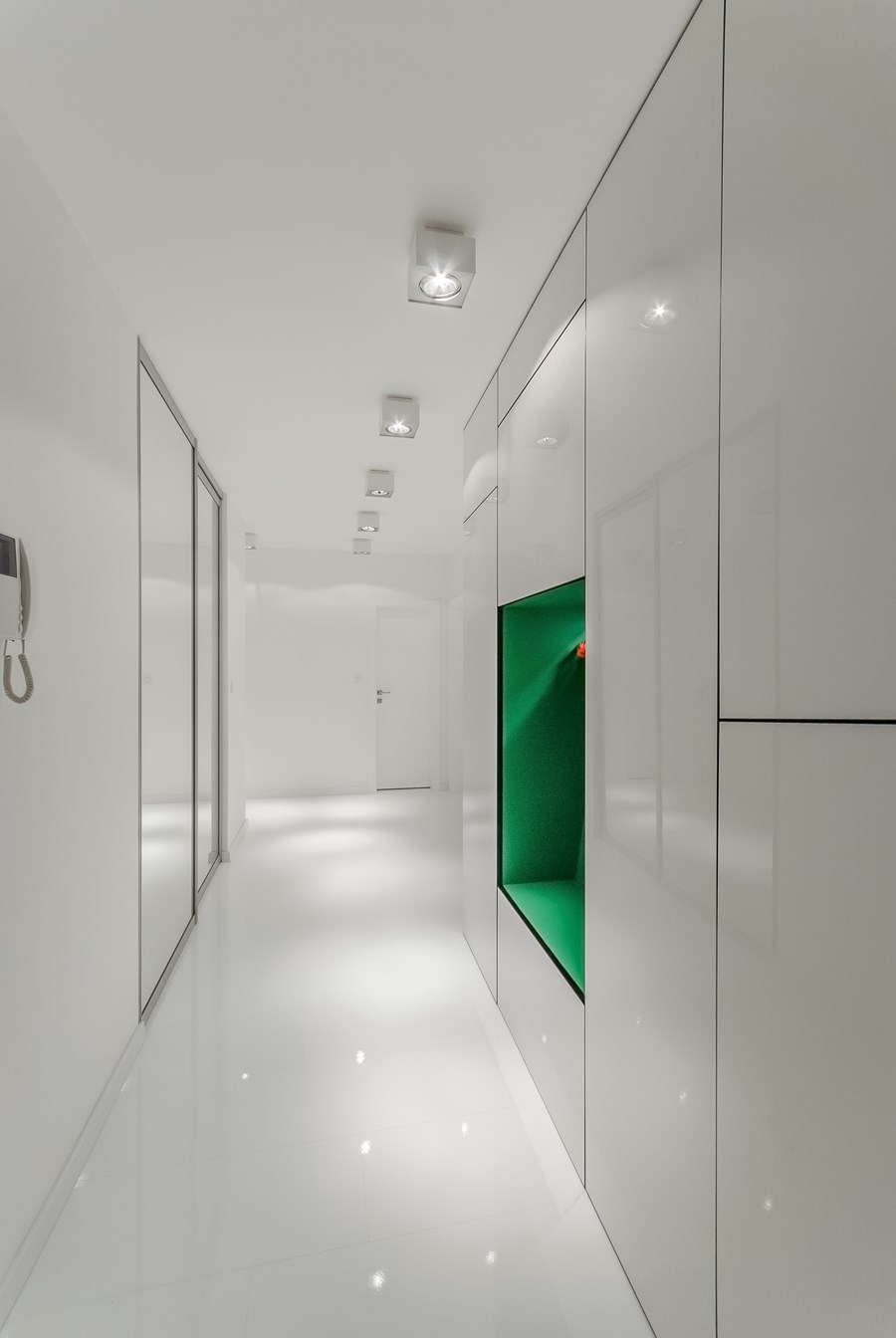 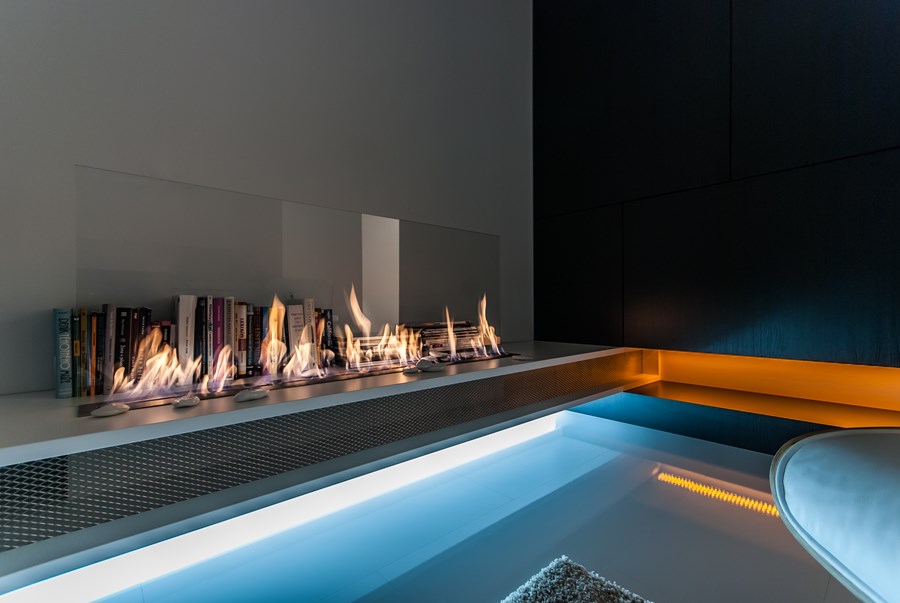 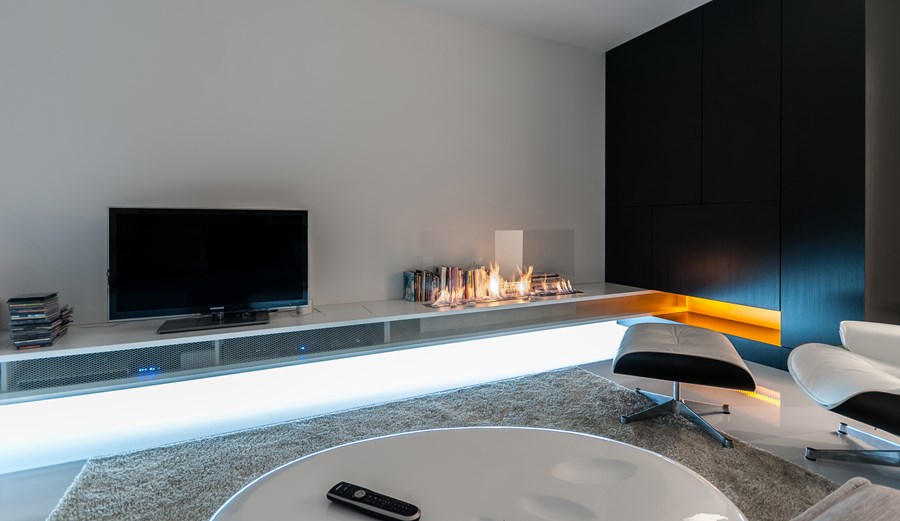 „We want our apartment to look clean and minimalistic – the way this showrooms look on photographs“– the investor explained her dream of a white glossy floor, over an open catalogue of German furniture. Even the checking questions about practicality would not bring her any doubts concerning the outlined sterile concept. This was exactly the kind of challenge that no designer would reject. At that moment, the creative director of Rado Rick designers knew, this was a chance they had to use. Not the chance for creating the cold and empty space the investor described. He saw the chance to fill the space with expressive futuristic forms and accents, which – thanks to the clean off-set, the desaturated color-range and the reduced amount of details – would fully take possession of it.
“During the briefing, when the customer describes his idea of the final layout of the interior and shows things he likes, we do not interpret this as binding limits. It is not the objective of a designer to create exactly what the client shows or describes him, but to read from the mediated images, what it is that he wants to feel from and communicate with the final outcome. The task of an architect or designer is to transform this message into forms of the design in a way, that the customer cannot imagine himself. Therein lies his originality and added value.” Explains Radomír Minjarík. In the case of this young and busy couple, who bought an empty apartment in one of Bratislava’s prestigious new-buildings, it was modernity, dynamicity and no will for compromises. Attributes characteristic for their go-getting lifestyle, which they desired to project into the layout of their home.
“If you design every detail exactly the way your customer described as what it is he likes, he might be satisfied. Or not. As a designer, I consider it my main objective to win the investor for a solution, I am convinced of being the one that brings him the most joy. Based on their dialogues, a good designer should be able to estimate his client’s taste better than the client himself – not only today, but also in 5 or 10 years. It takes a lot of risks and effort, as doing so you bet everything on one card. However, by now I had great luck with clients, who were open to our advice and none of them did yet regret it.”
The investors desired the feeling of a spacious and open loft, which allows a free flow of energy. The first challenge that had to be taken was removing the wall dividing the kitchen from the living room. Both rooms had a door and a window linking it to a joint loggia, which’s composition in the united space conspicuously referred to the original floorplan. As due to budget reasons the client refused to change the wall structure, the designers covered the whole wall with a translucent, non-transparent white curtain. The sharp light, flowing generously inside through big windows and two glass doors, refracts at the curtain, becoming a bright soft glow that evenly enlightens every spot of the room.
In the corner opposite the window wall the designers placed a futuristic kitchen. With its dynamic form it creates a perfect counterpoint to the calmly streaming lines of the relaxation zone. The attention, which the designers paid to integrating functional details into the custom designed furniture, lets you feel like stepping inside the lab of a spaceship – from a removable cutting board blended into the worktop of the kitchen-aisle, to a bio-fueled fireplace embedded in the floating TV console – everything has its pre-engineered logics.
An identical approach can be seen in the entrance-hall. The entering corridor, which leads into the hall, was prolonged. The originally shorter wall is coated with glossy white plates, which continually blend into a built-in wardrobe. The only thing, which the entering visitor notices in a white tunnel, is a green niche at his right. Its function and content remain hidden until you reach the level to frontally face it. In that moment the niche reveals an UV-lamp nourished flowerbed, which invites you to take seat underneath and take off your shoes.
“It is not an apartment everyone could live in. Quite to the contrary – it was custom designed to tightly match the extraordinary requirements of a unique customer. They plan to spend the most productive period of their life in it, that’s why they expect it to show them their path without any embellishments. I’m more than convinced, that in 15 years, when building their first house, even materials like wood or natural stone will come to word. However, even despite of their absence, we succeeded to create a welcoming home, providing the feeling of warmth and shelter. No 6 months had passed since the couple moved into their new home, and the first offspring knocked on the couple’s door to make them a family.” – asserts gladly the author of the interior, which – by its non-compromise form – has taken the breath of many.
Photos: Juraj Hatina