House in Monasterios designed by Ramon Esteve is located in a residential area, in the town of Puzol. The plot is situated in an elevated location which is dominated by the hillside that slopes down to the sea. 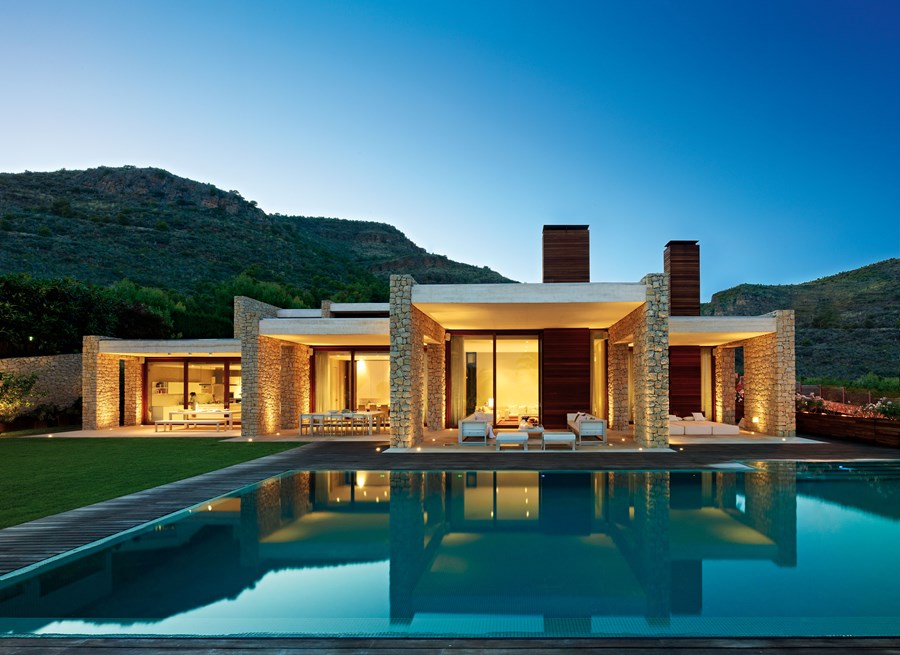 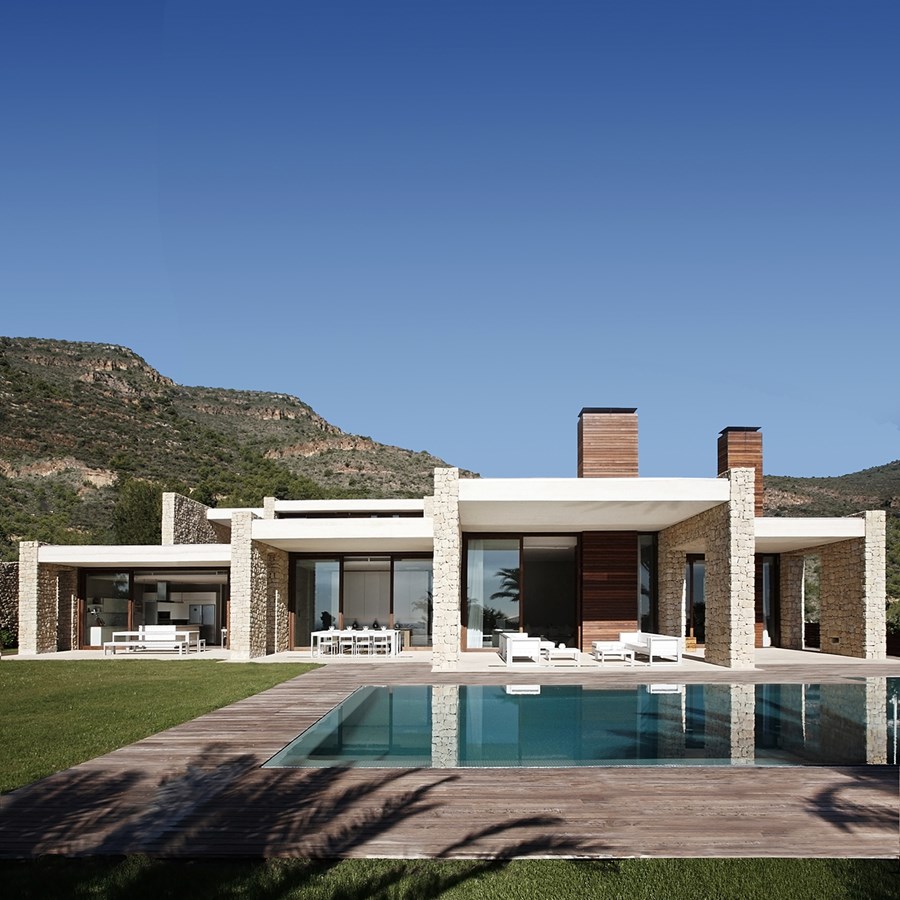 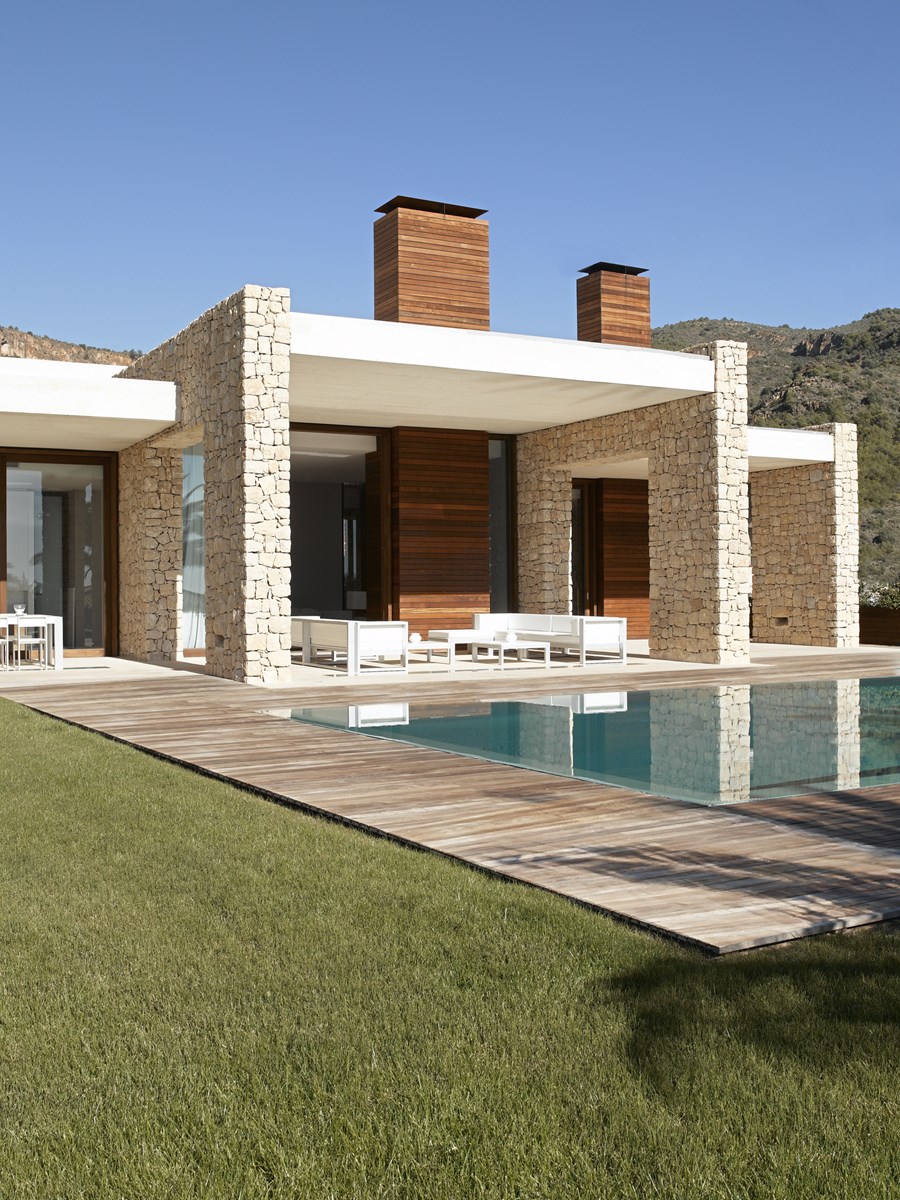 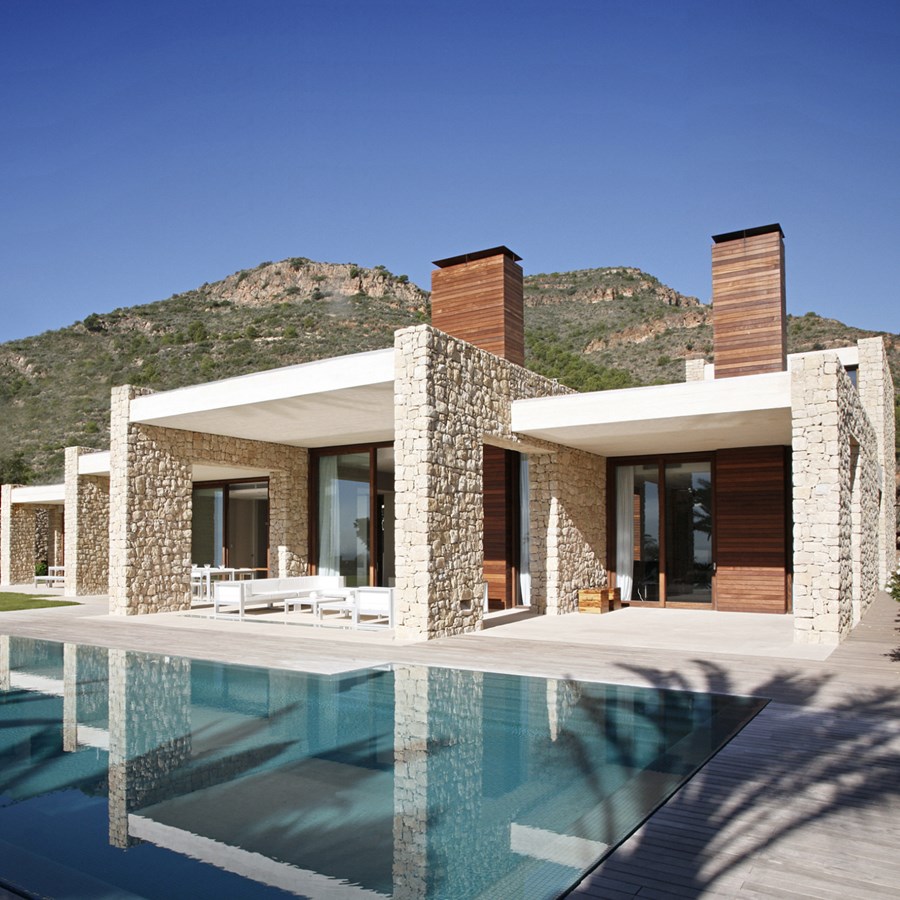 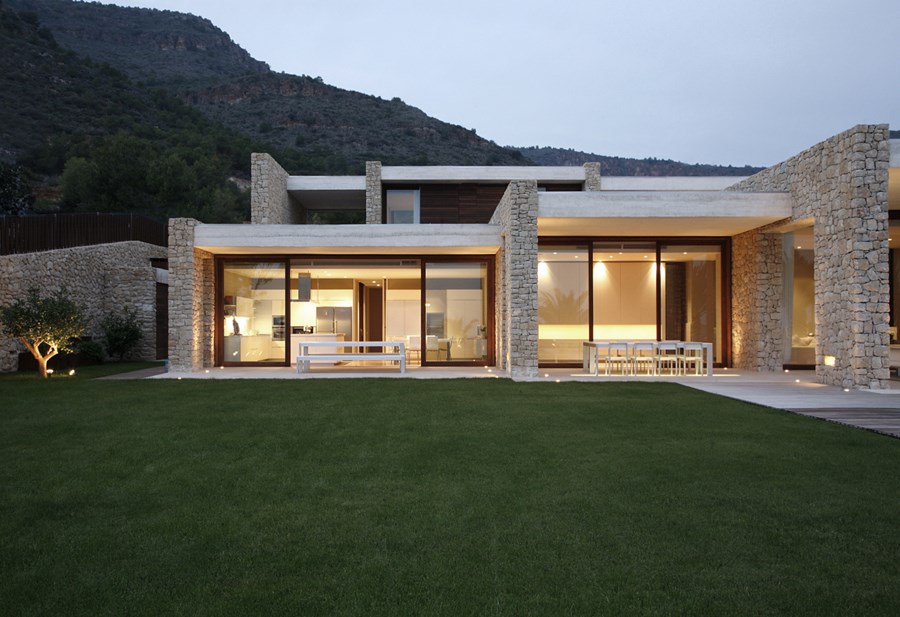 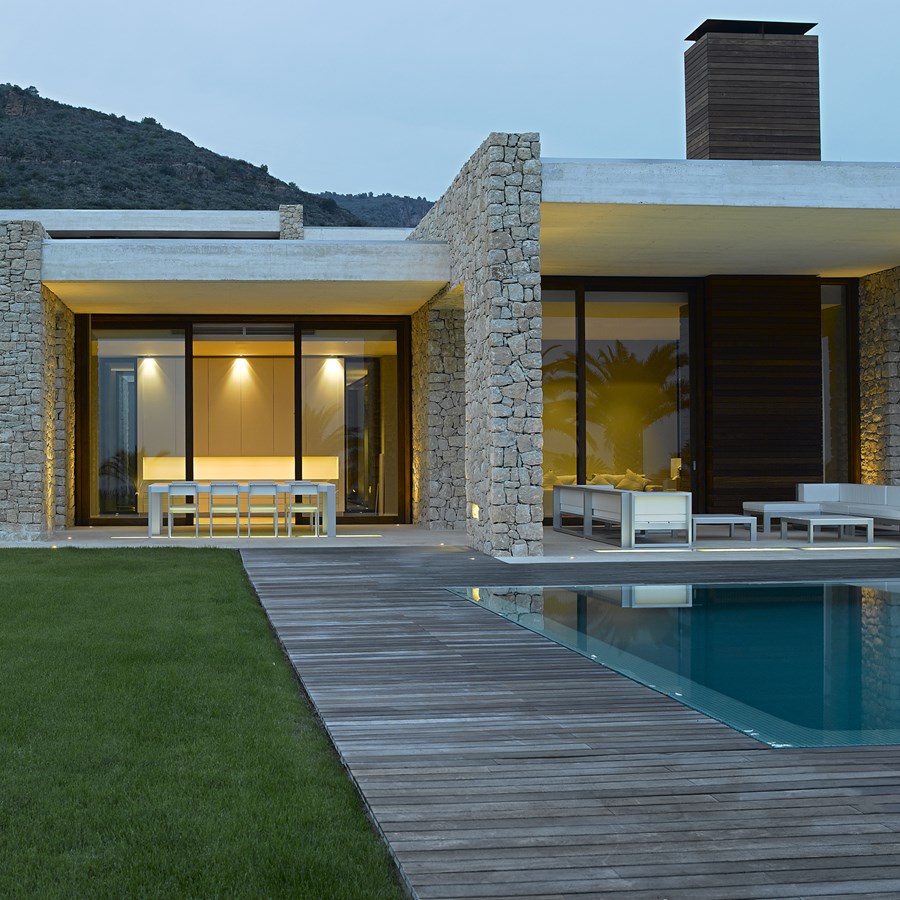 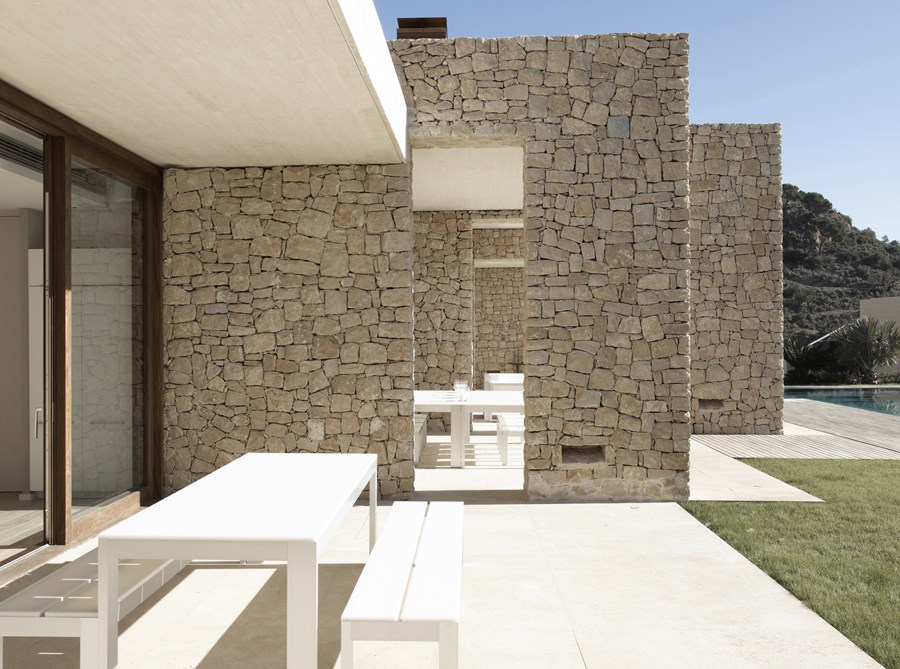 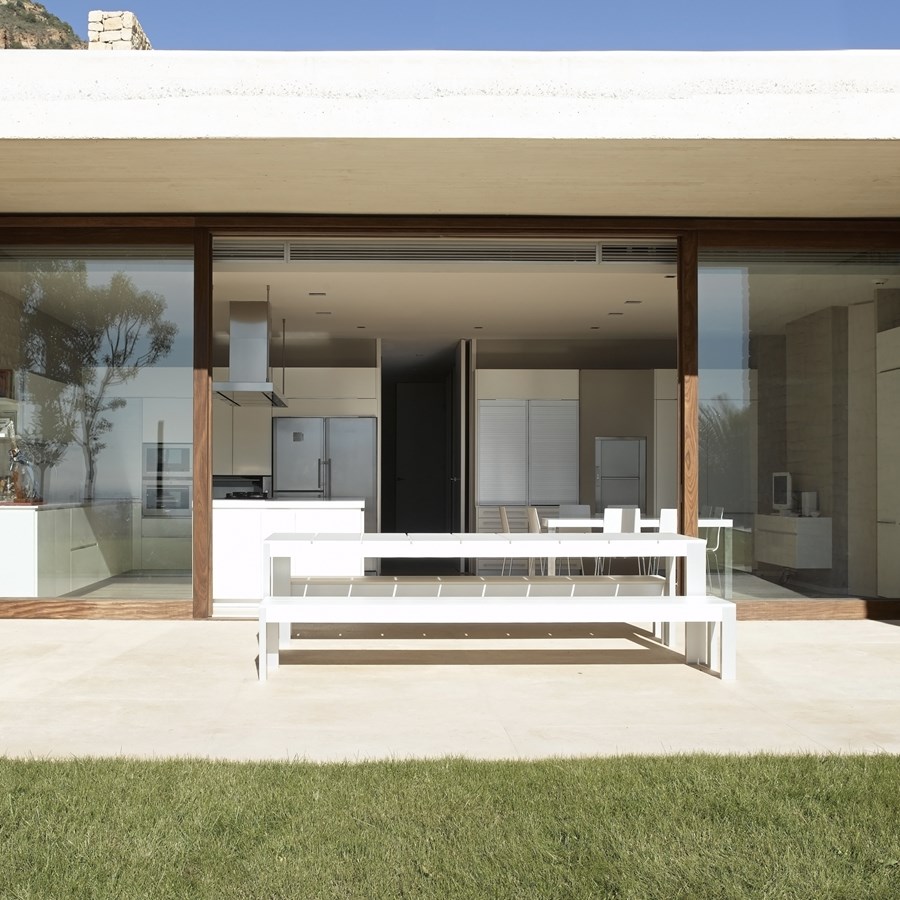 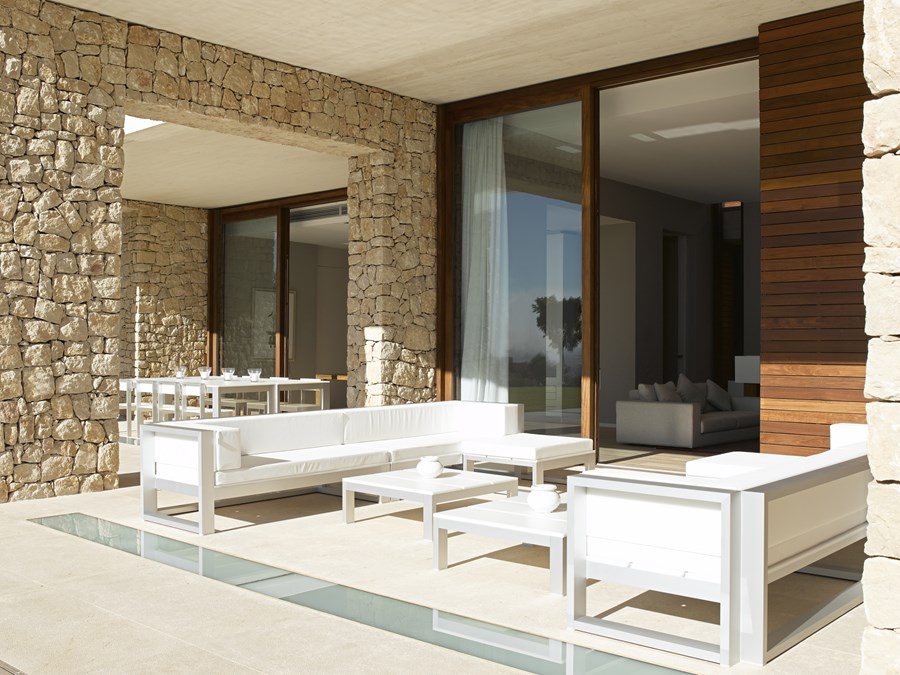 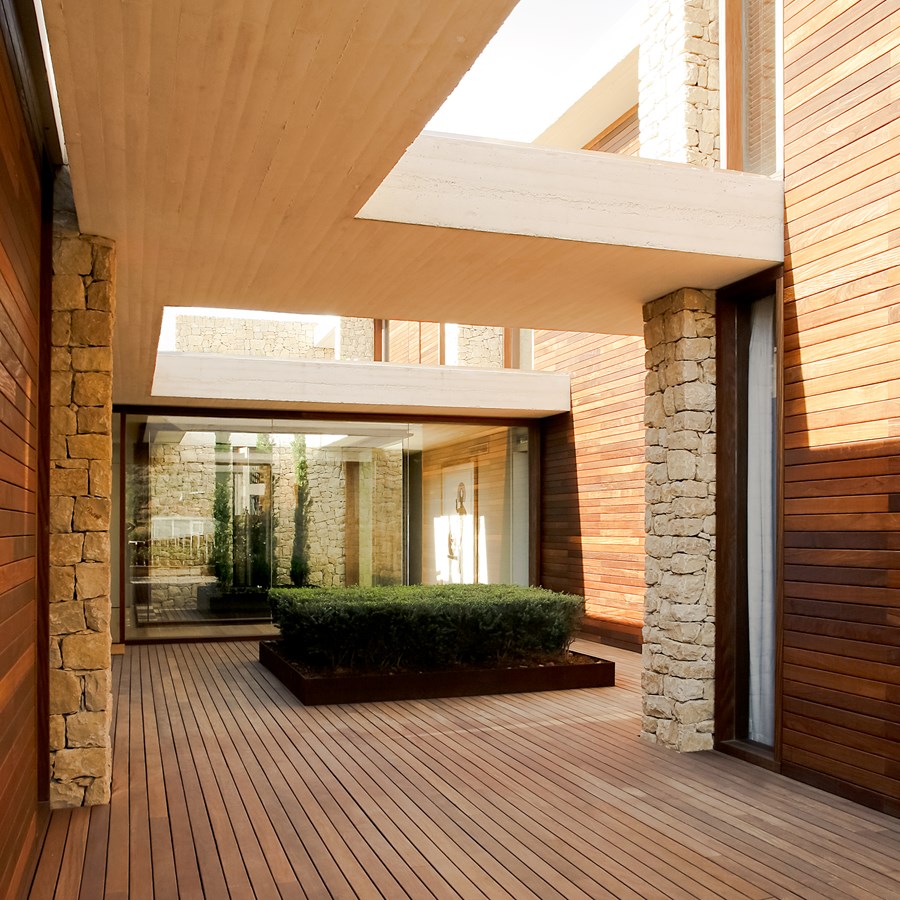 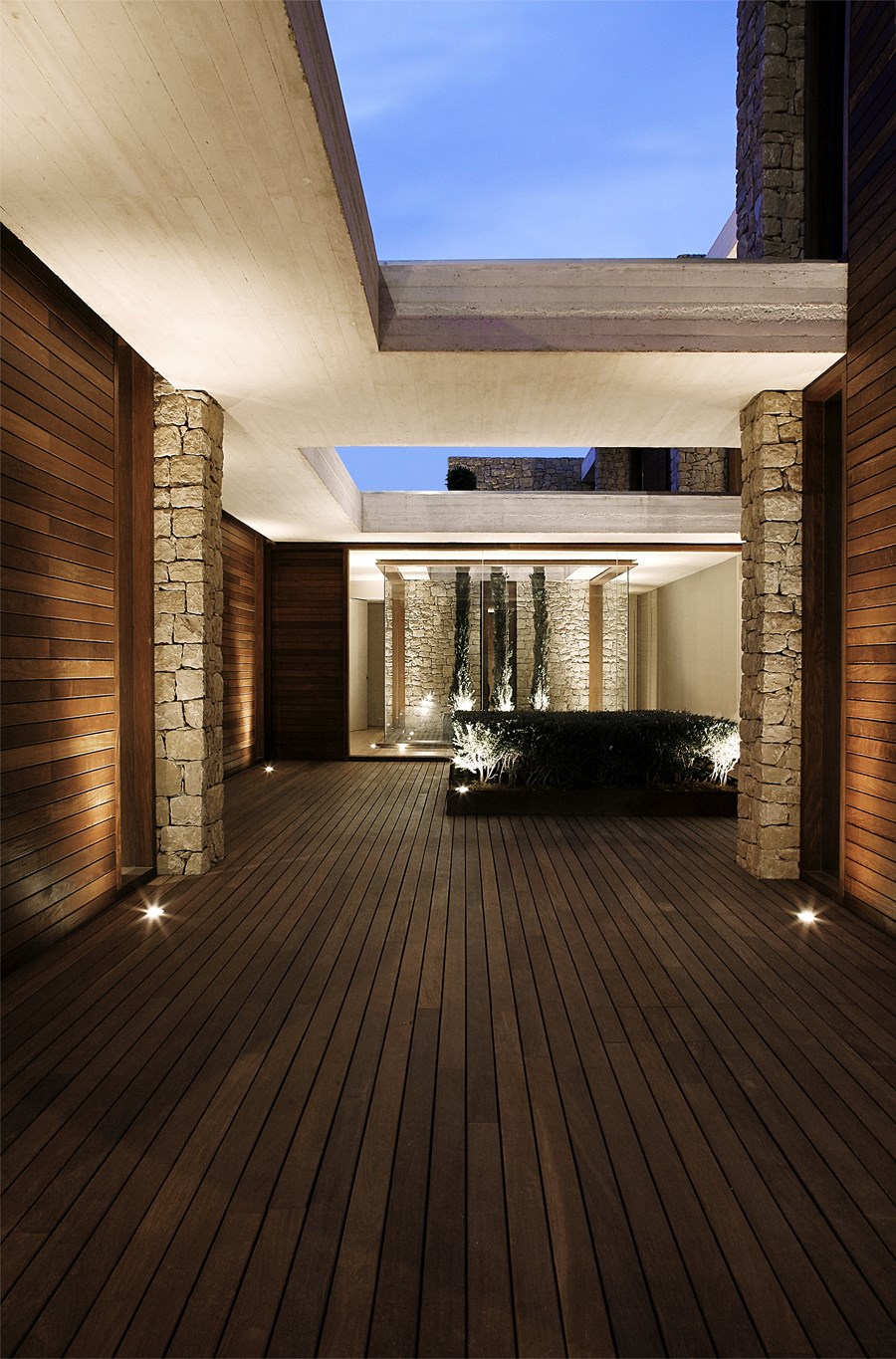 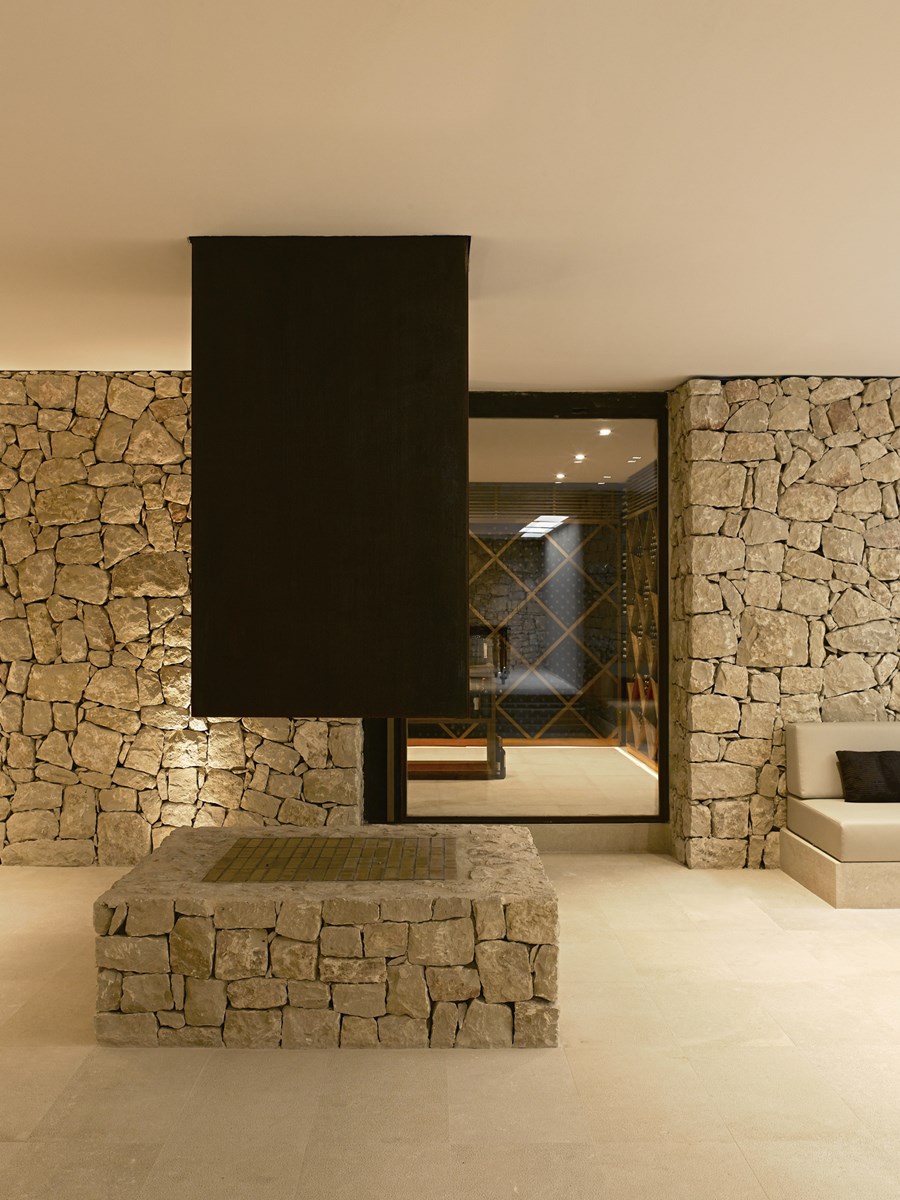 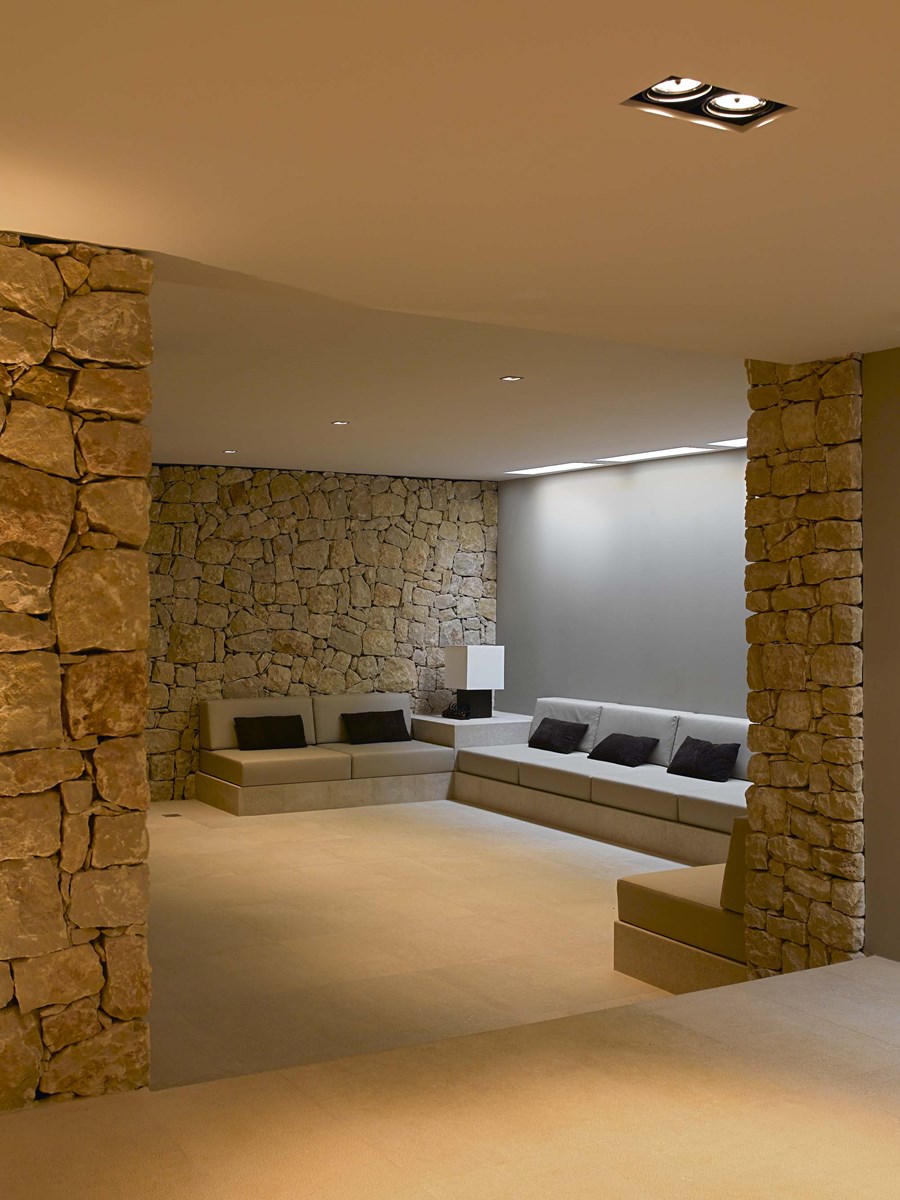 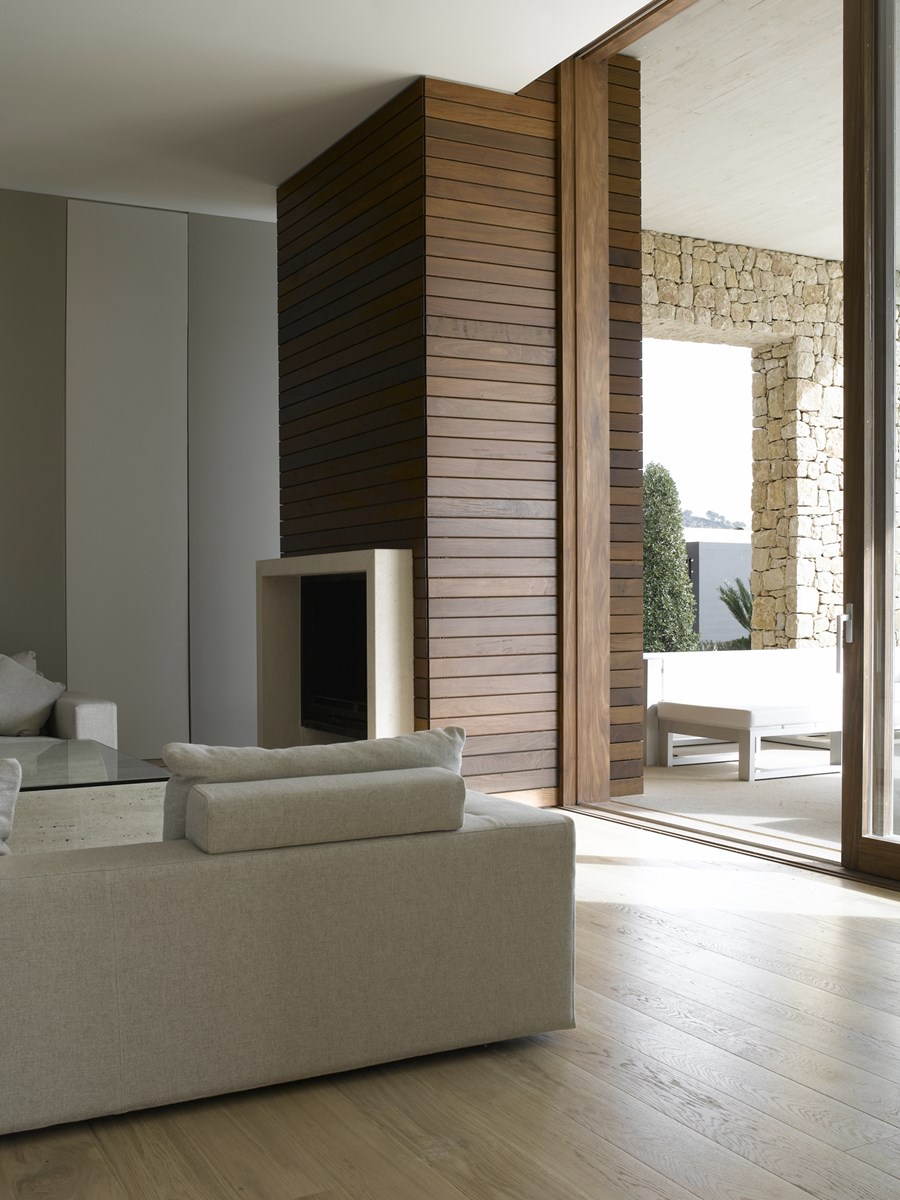 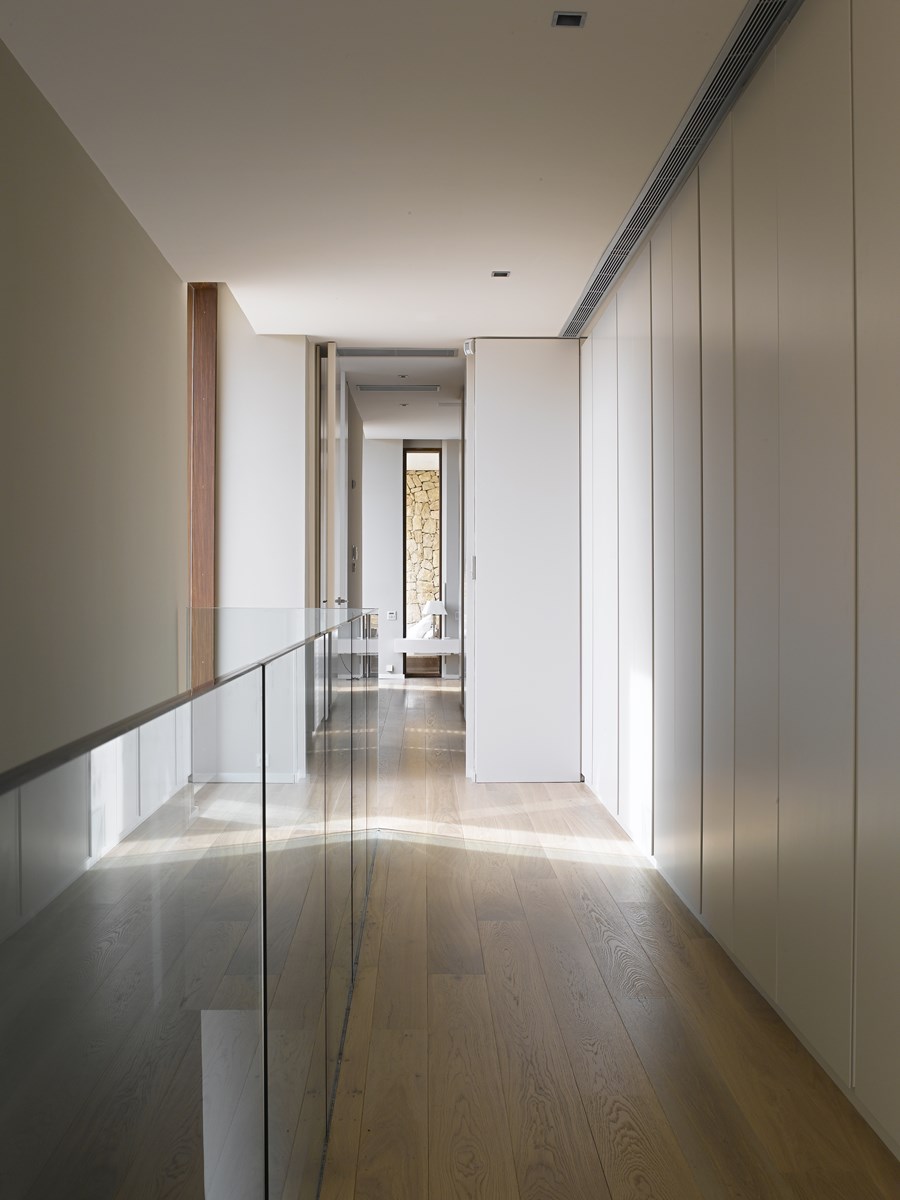 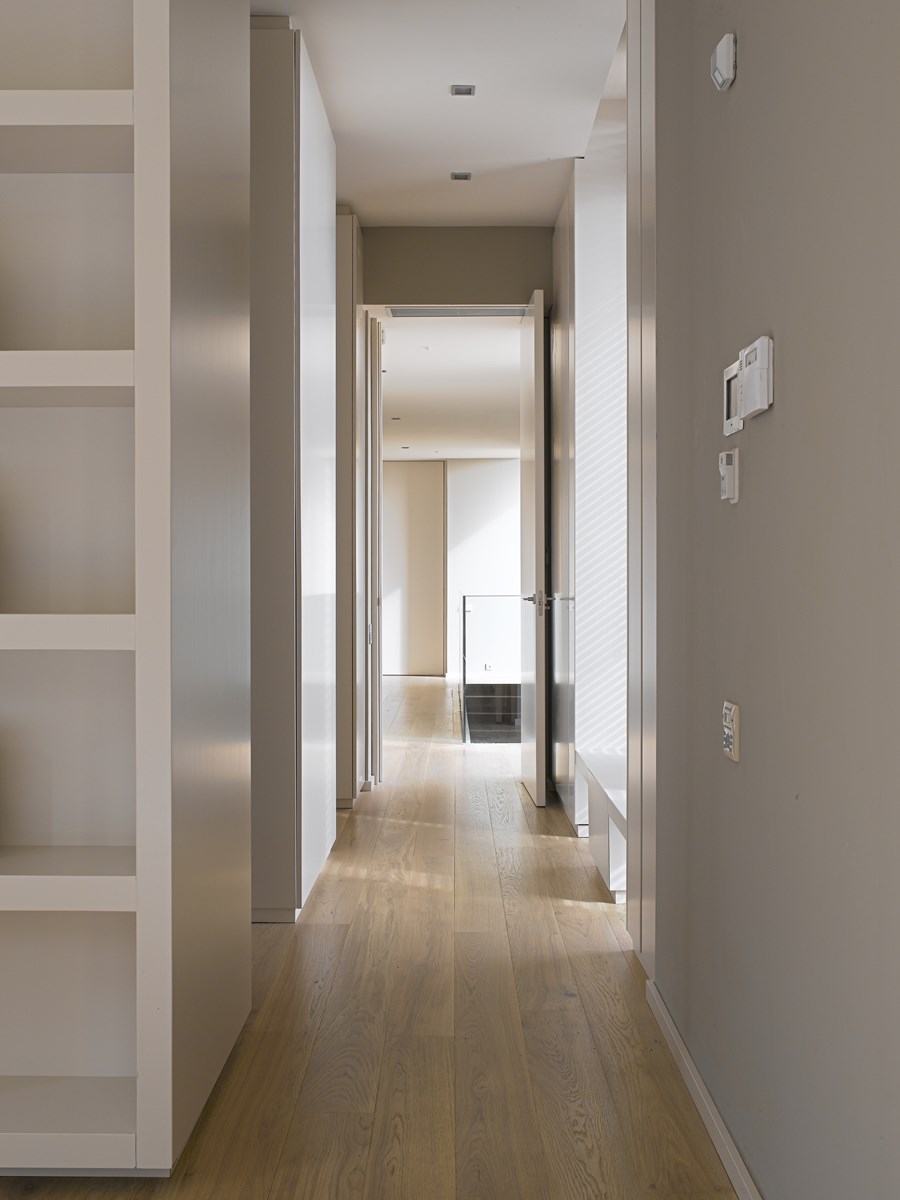 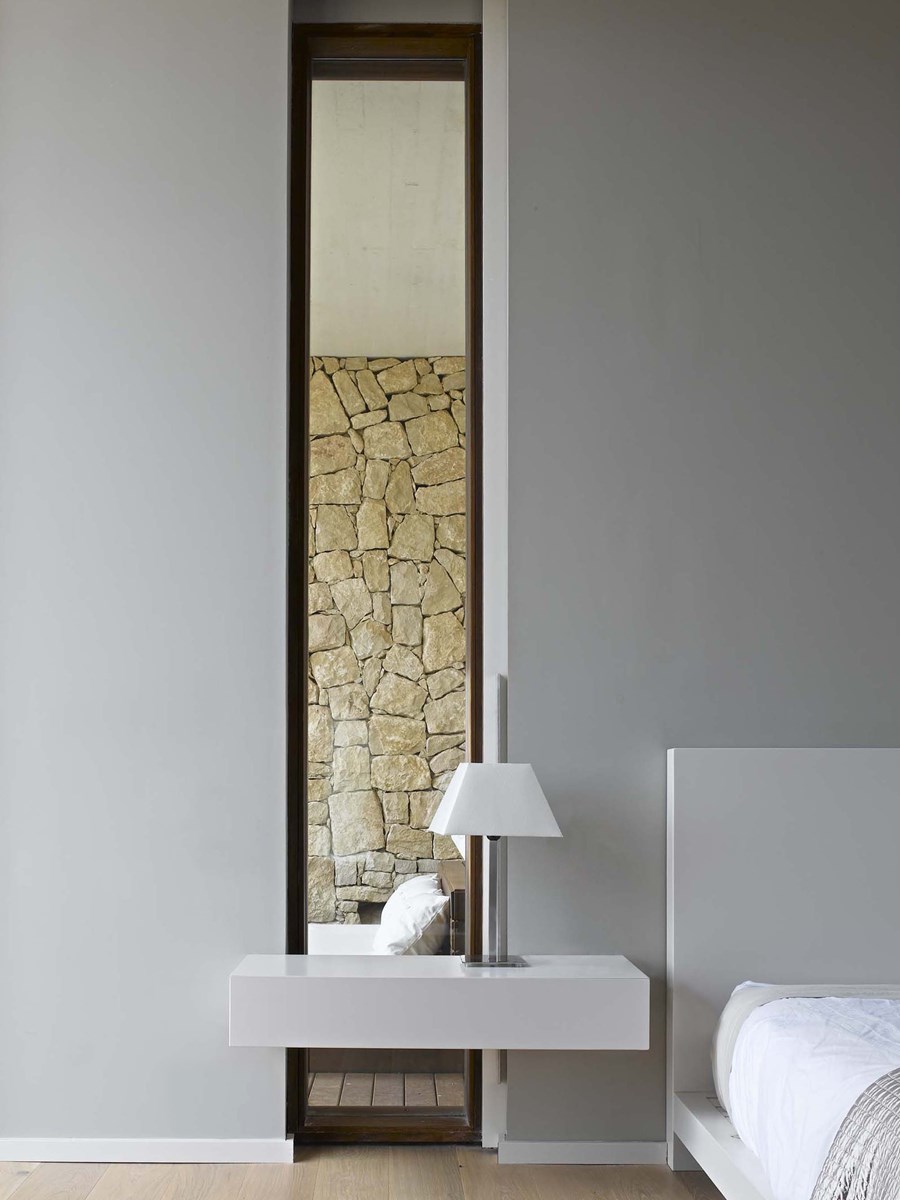 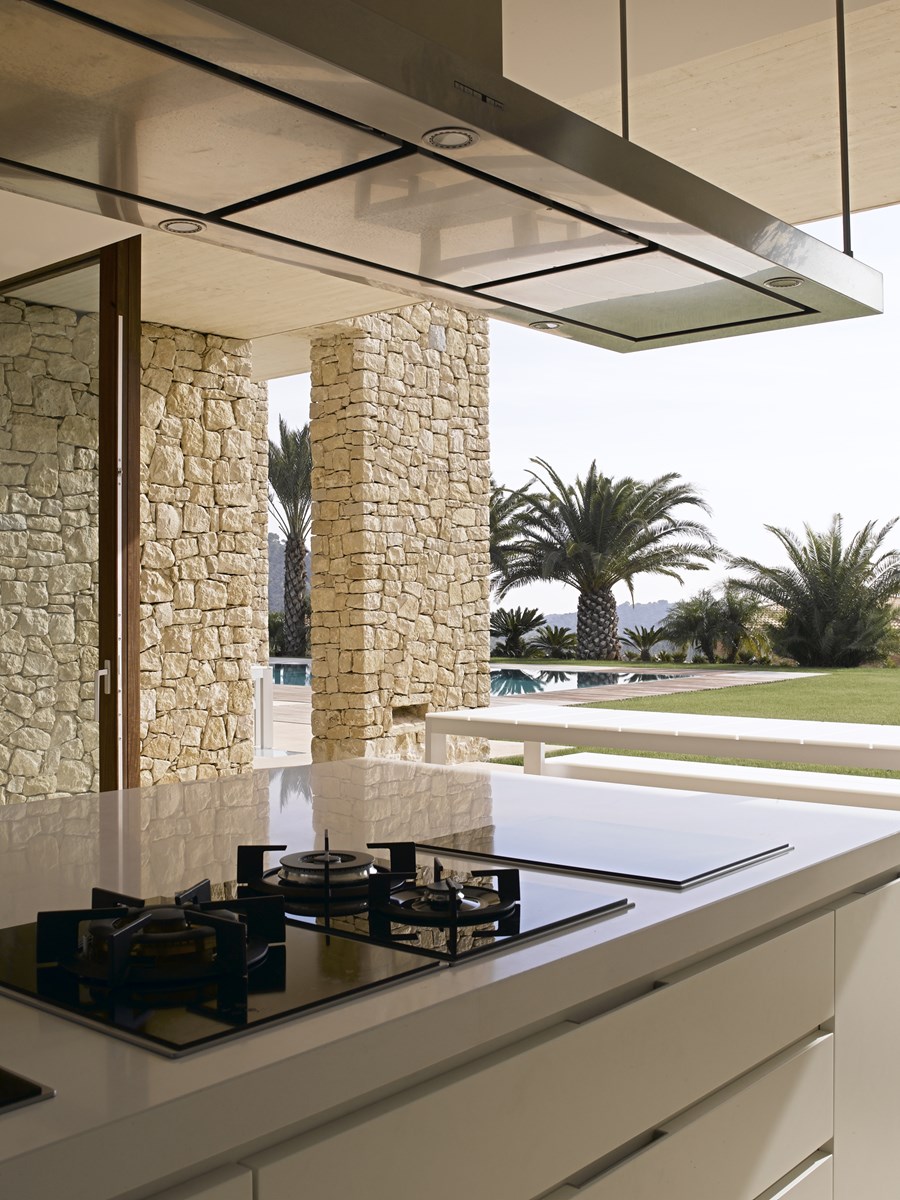 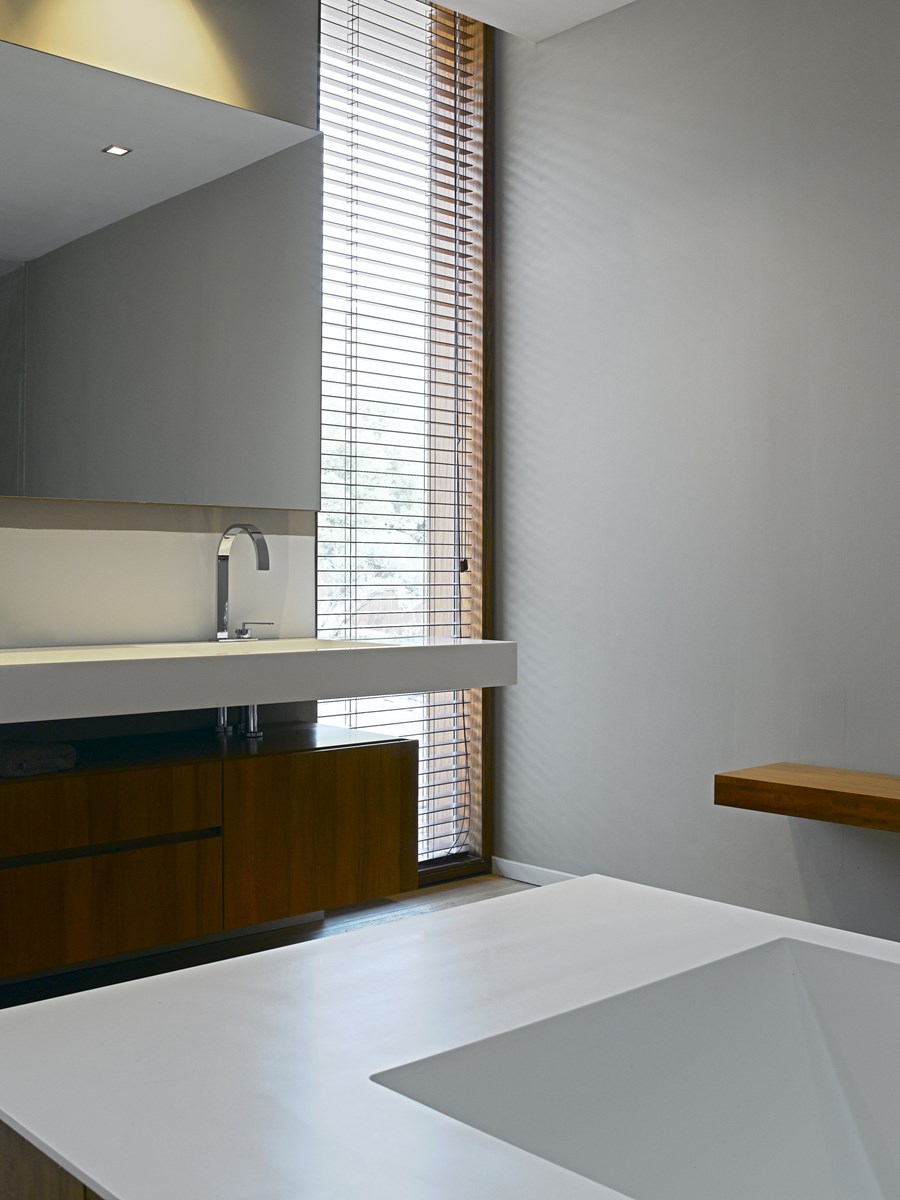 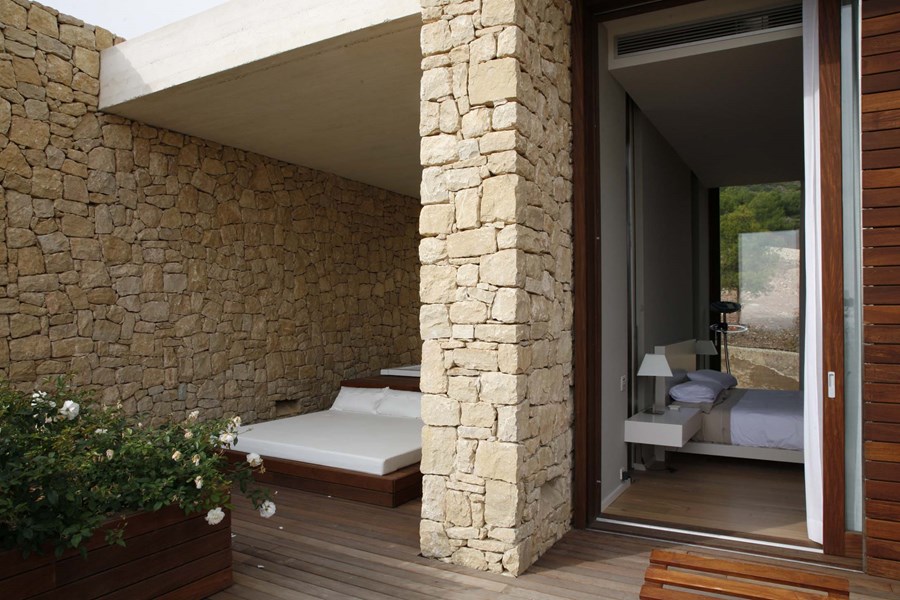 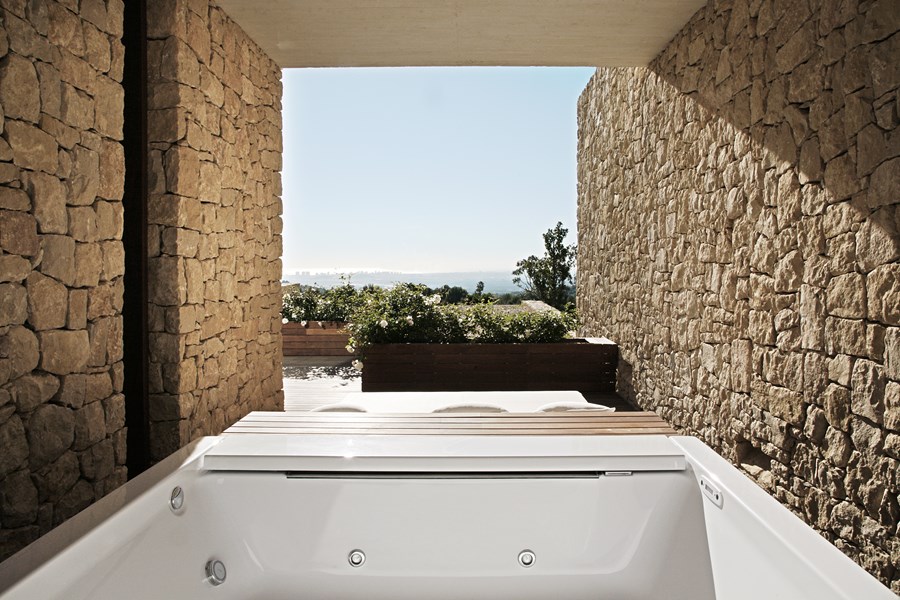 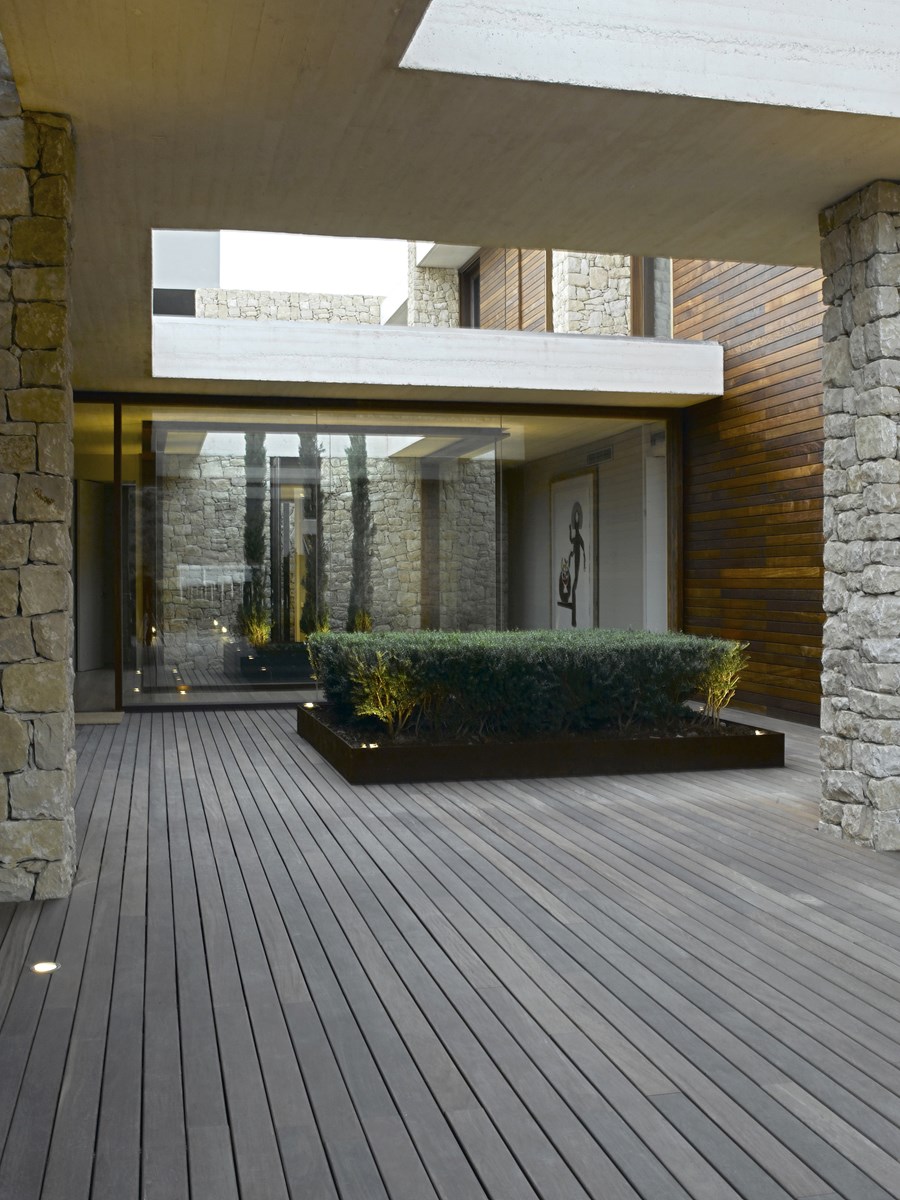 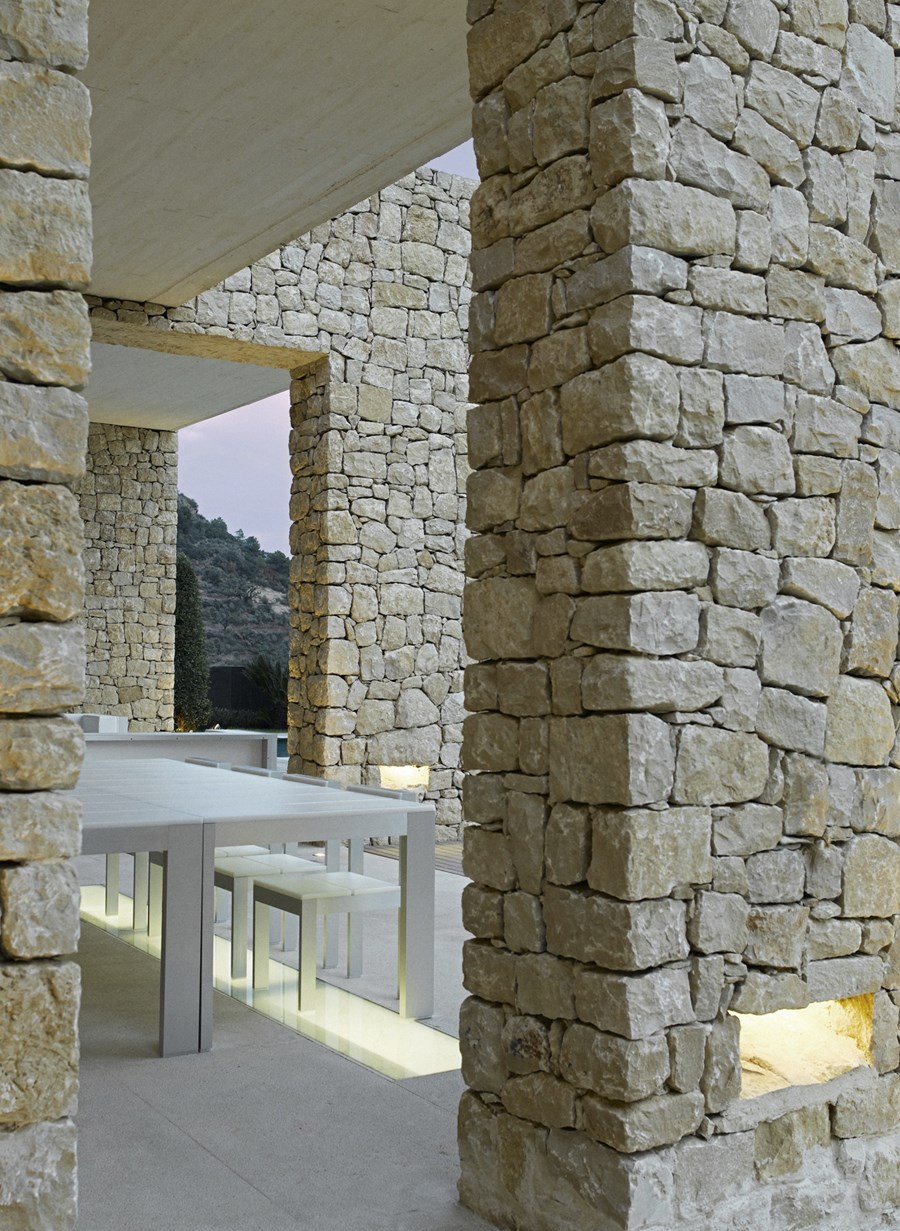 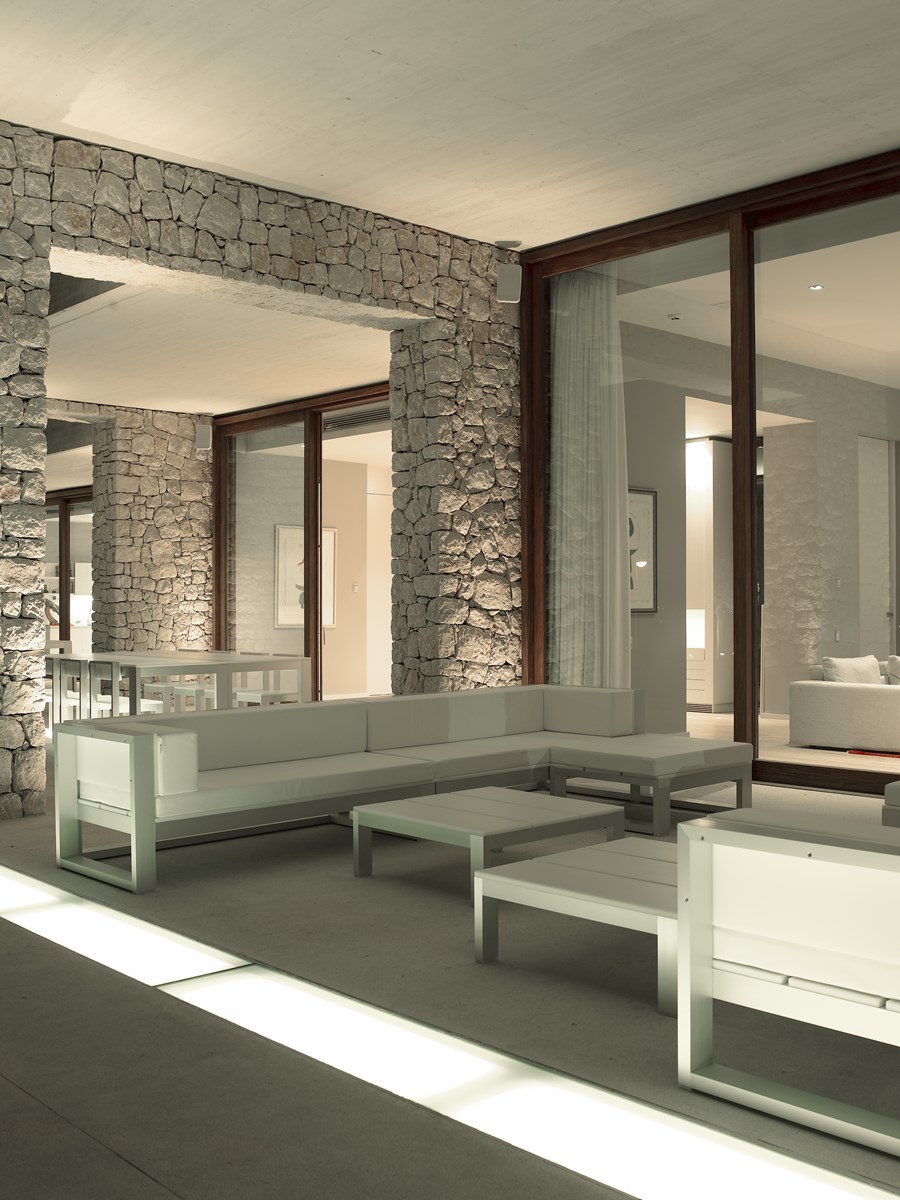 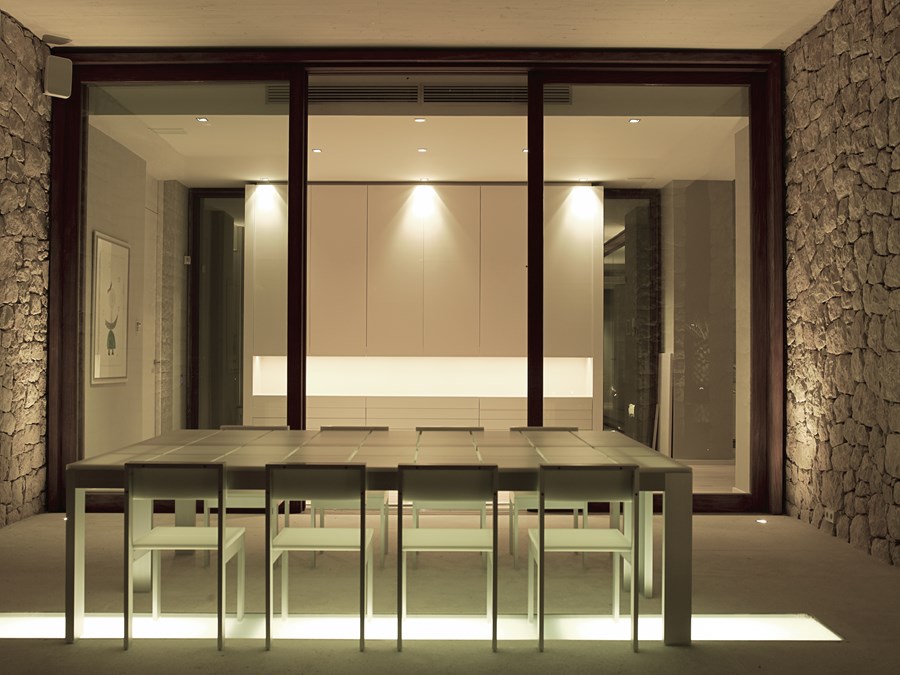 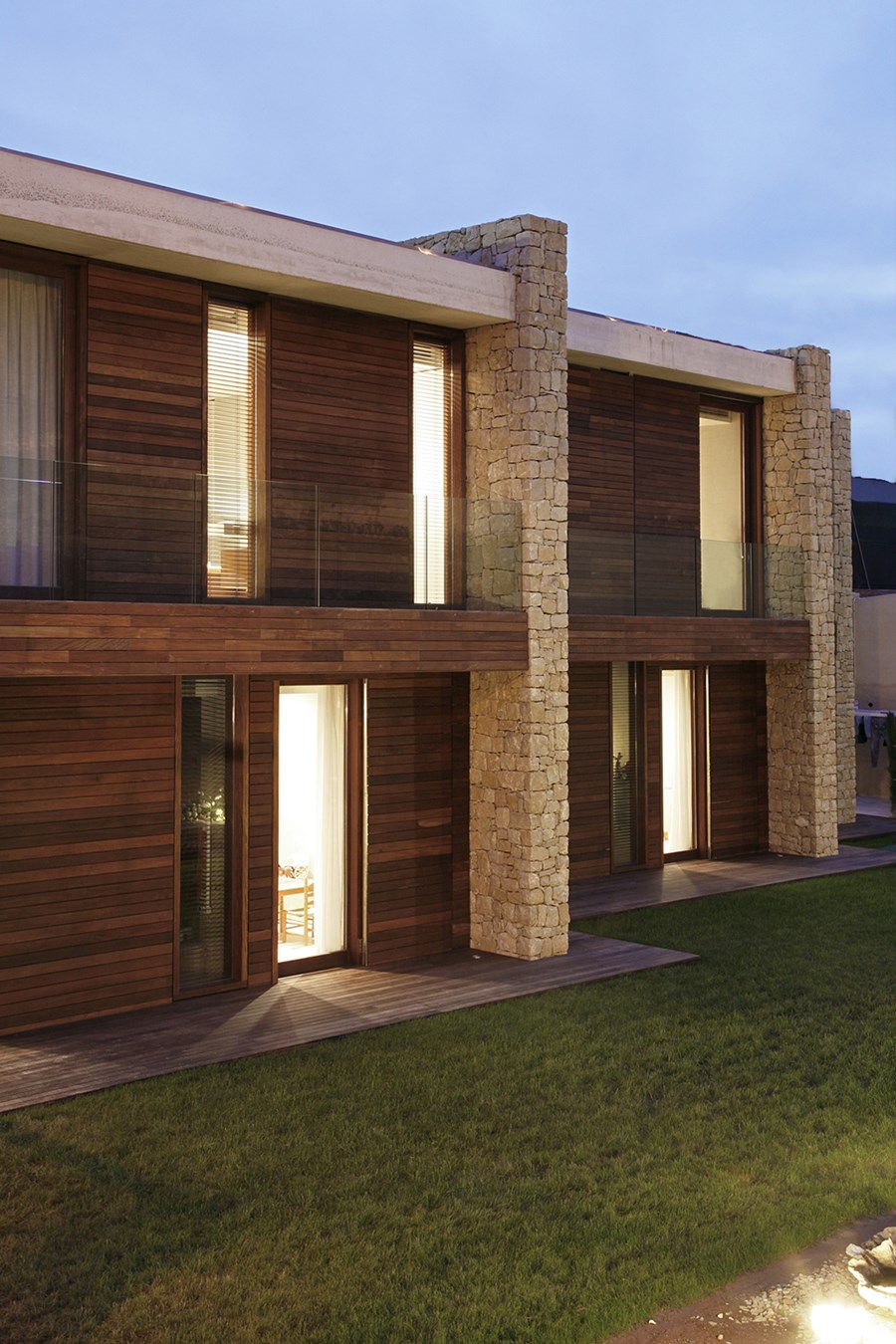 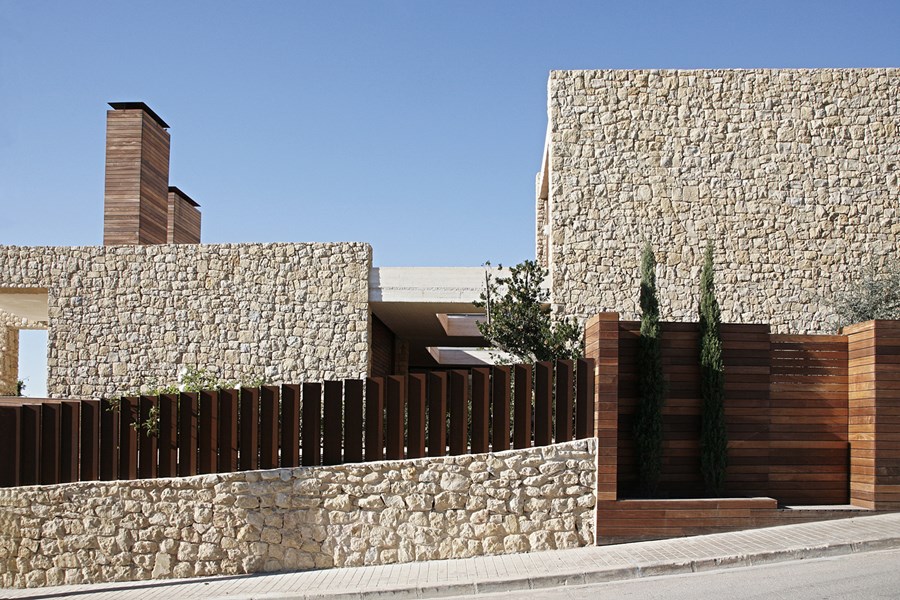 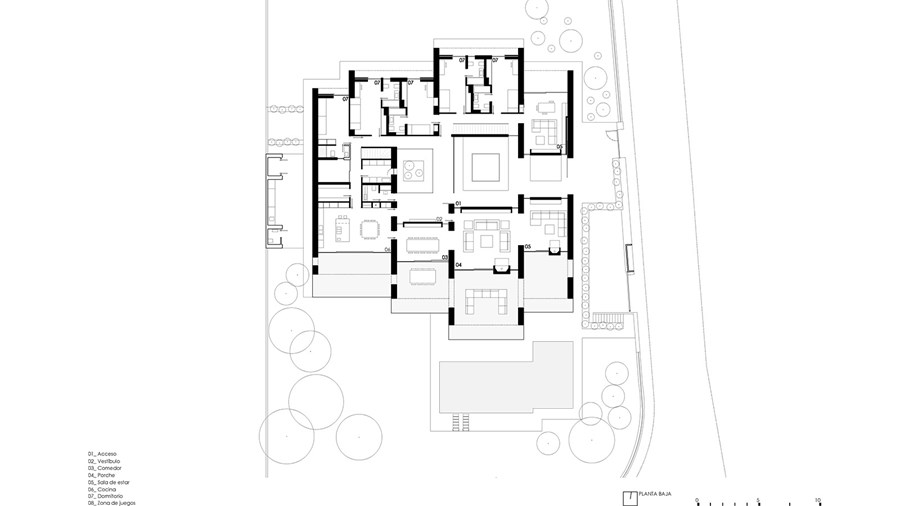 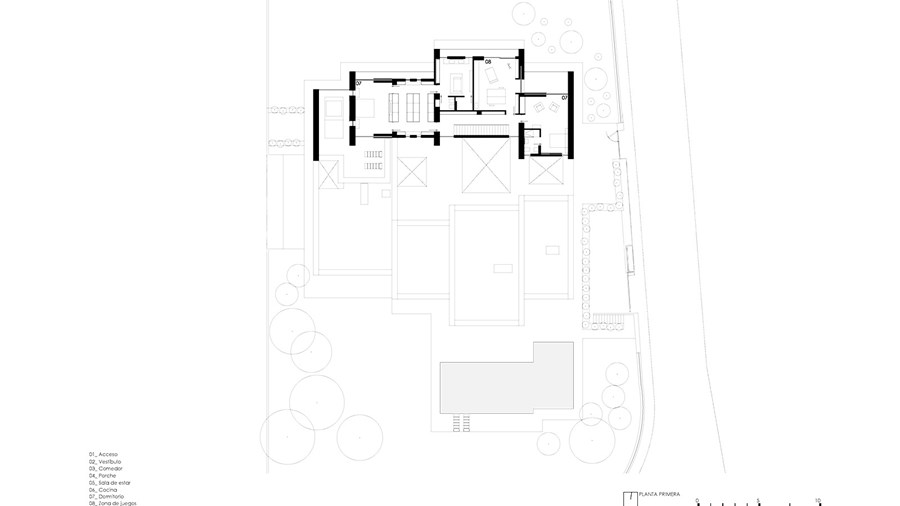 With the objective to take advantage of the plots’ visual, a few stone walls that define the project, in an abstract manner, in that direction are created. The housing is structured as a series of volumes of different heights, in which the geometry adapts to the pace that are marked by the main walls.
This project restores the roman scheme by which, the house is structured around a patio. In this particular case, there are three consecutive patios embracing the access to articulate the program, by dividing the house into a day and night zone.
The stone planes are covered with white concrete slabs that are closed by membranes made of glass and wood which configure the different rooms, giving rise to a clear horizontality in the conception of the project. The counterpoint is marked by
two wooden fireplaces that emerge above the property line.
“A set of porches, which protect the main rooms, advance to the edge of the pool, allowing the house to be reflected in the water and giving it a more theatrical aspect.”
“These volumes are articulated by the series of patios, covered in its perimeter in the style of atriums. These openings define the access to the interior of the house and in turn they will allow the rooms to have access to this path, obtaining different perceptions of the space”. Ramón Esteve.
The exterior space lightings generate a theatrical atmosphere, enhancing at the same time the texture of the different materials that coexist in harmony in this house.
The porches get different reflections by the nearby mass of water of the swimming pool, which creates an effect of a space enlargement.
The program is organized around the patios, located in the center of the house, and it emphasizes the provision of the volumes seen from the outside.
The materiality is reduced to a set of combinations between stone, concrete, wood and glass. Among the great defining walls, the space is enclosed by large glass panels protected by removable wooden platforms, which regulate the level of closure of each piece.
In the interior spaces, in which the natural lighting plays a fundamental role, it appears that the stone harmonizes when combining it with the wood.
Photography by Mayte Piera