The cultural and physical environment was a leading thread for the process of designing this House in Na Xemena Cove, Ibiza: the light, a landscape of rocks and junipers, and the cliffs outlined on the sea. 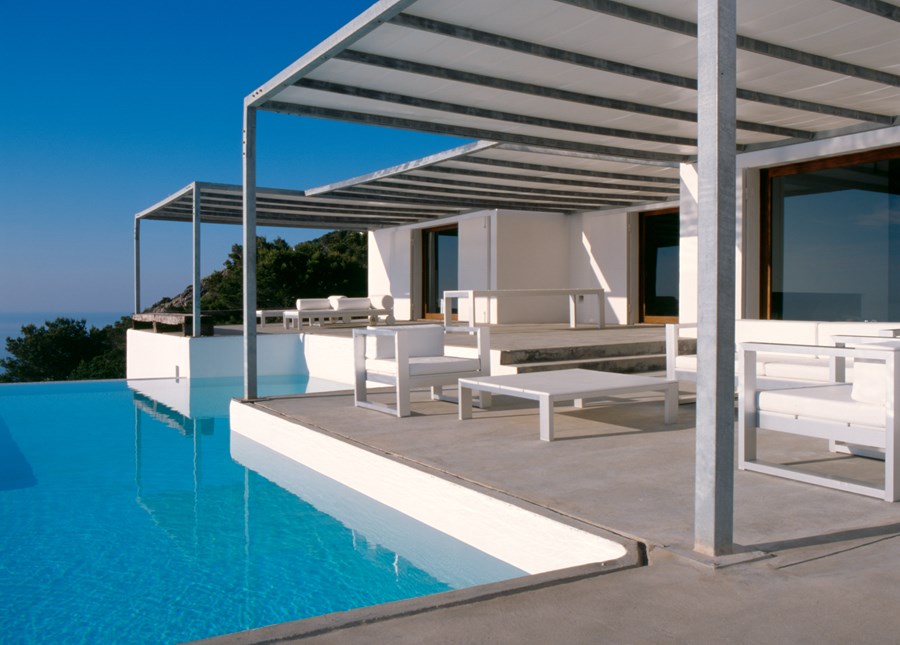 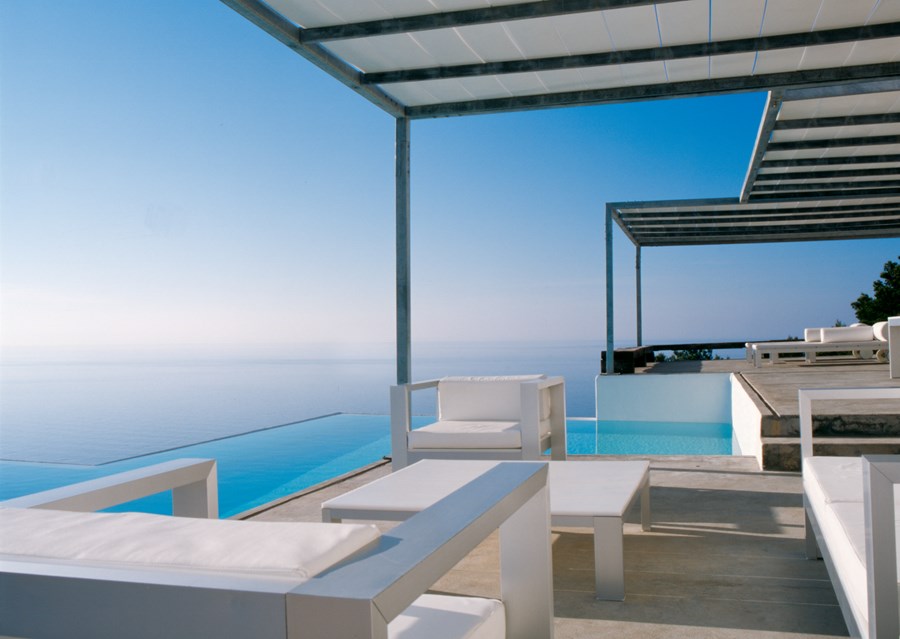 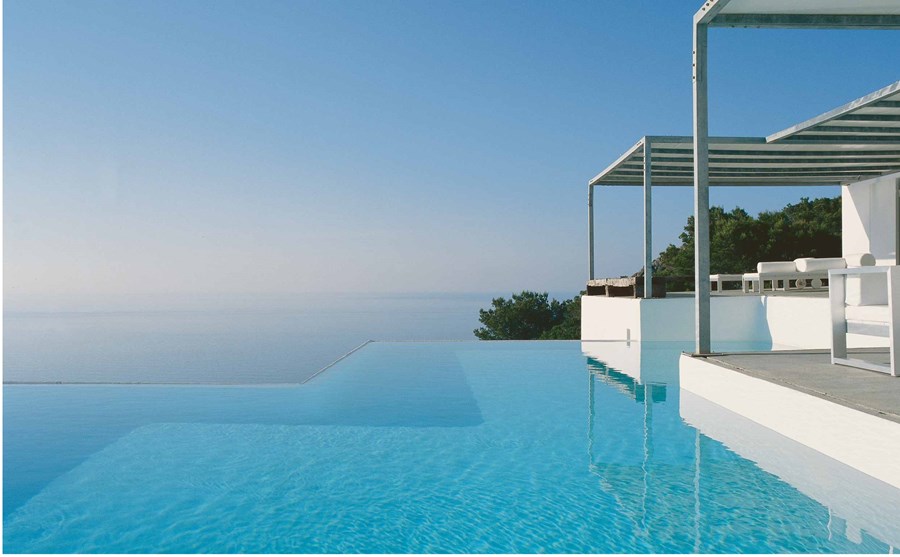 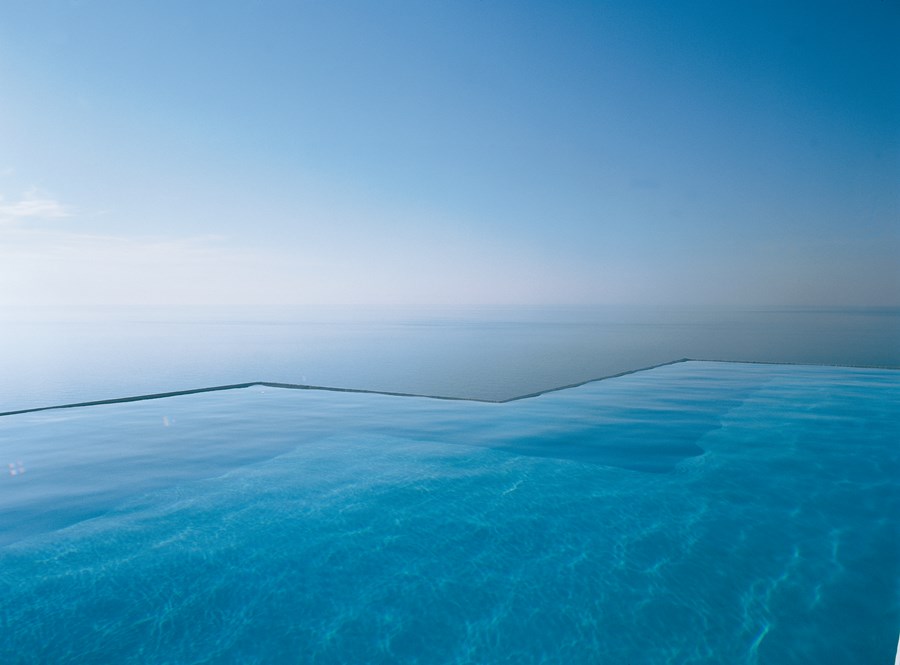 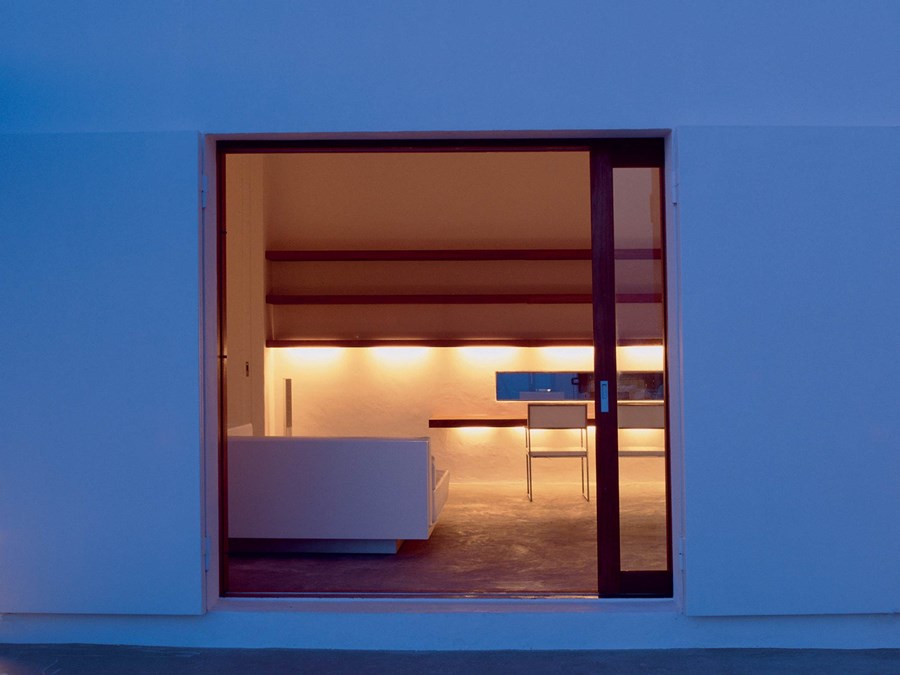 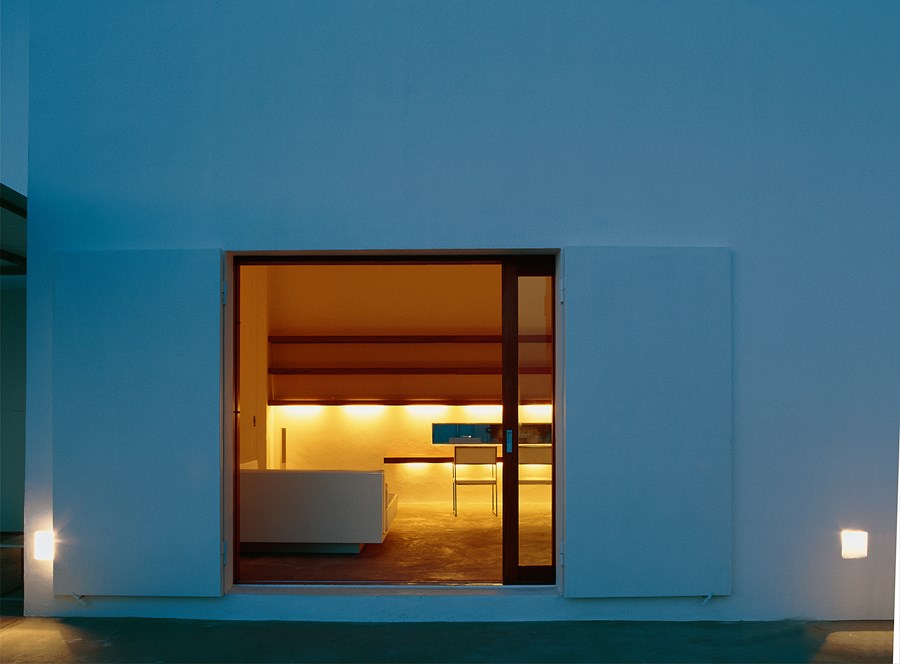 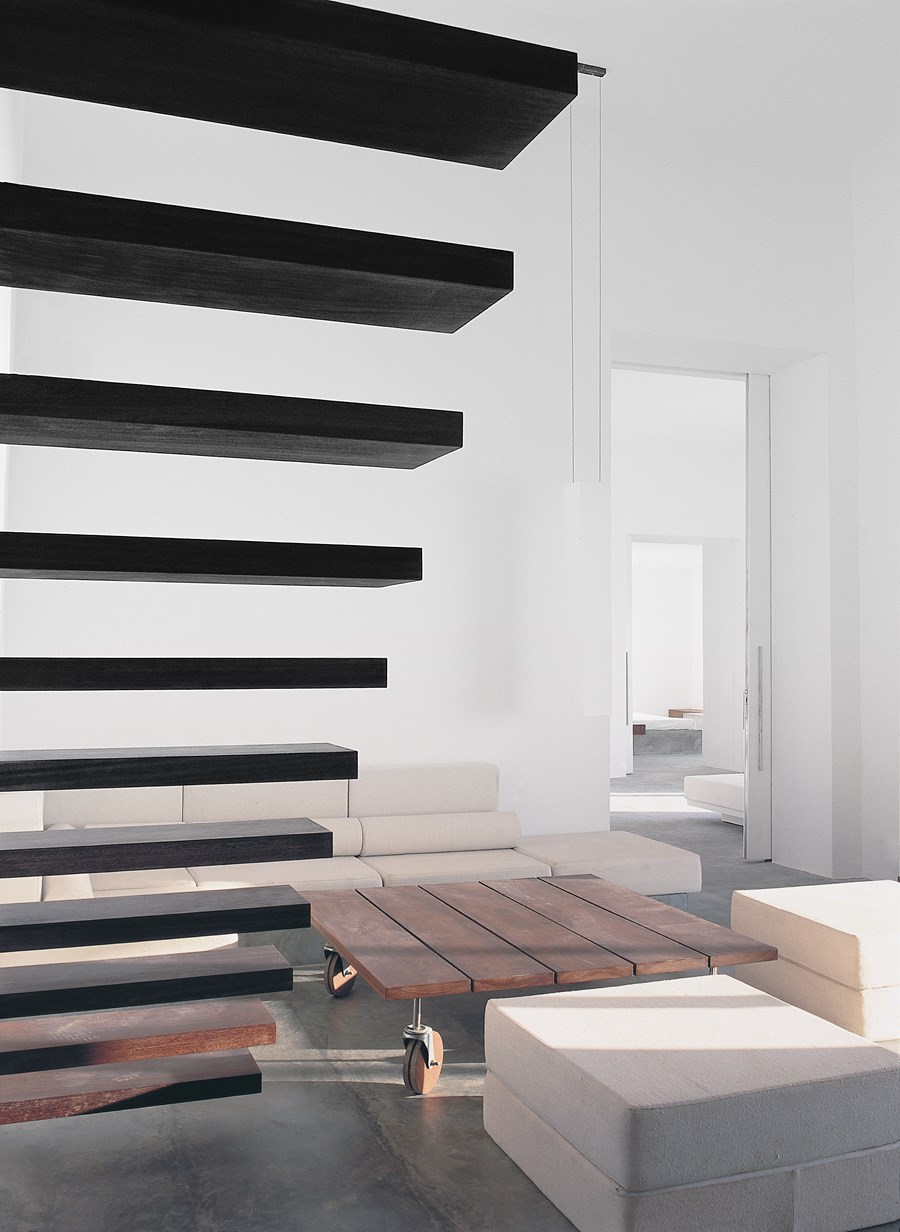 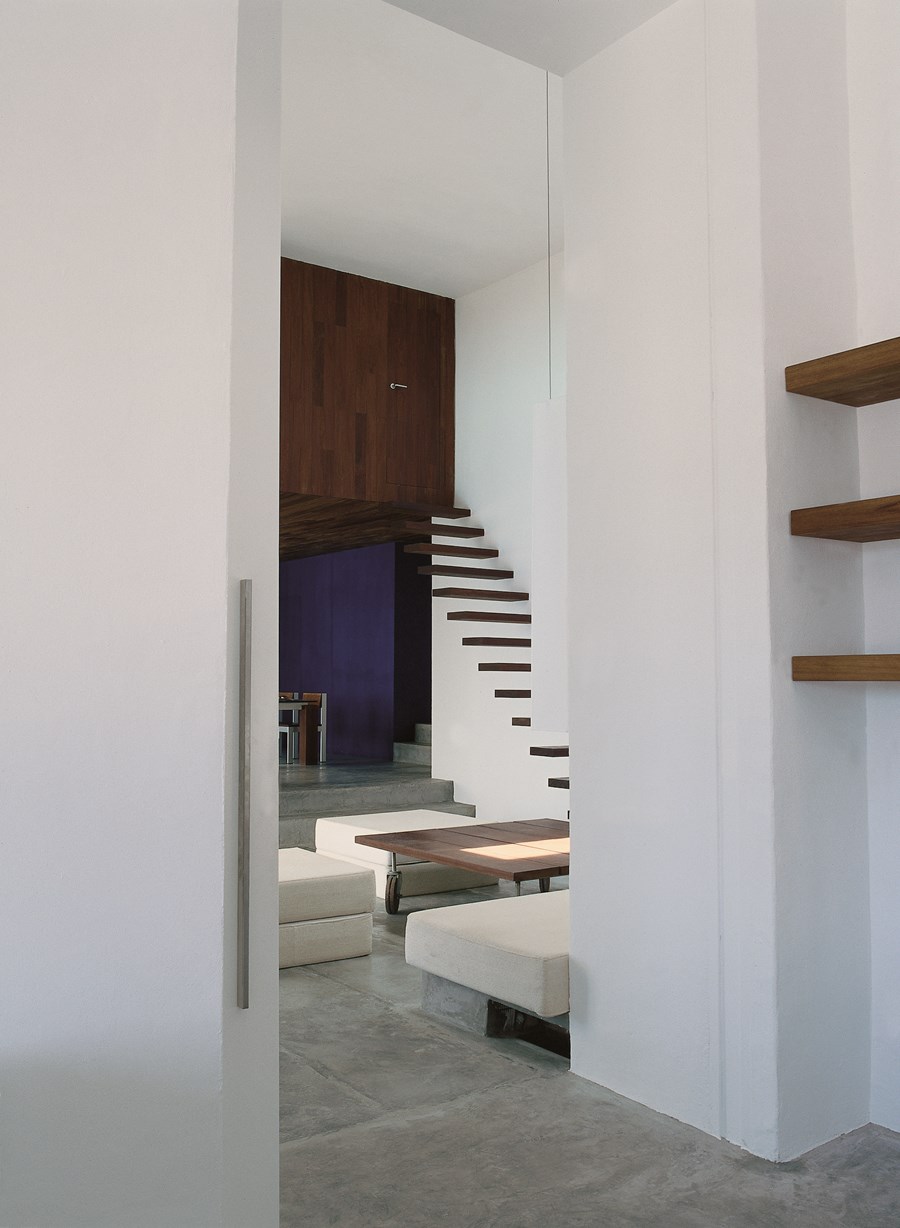 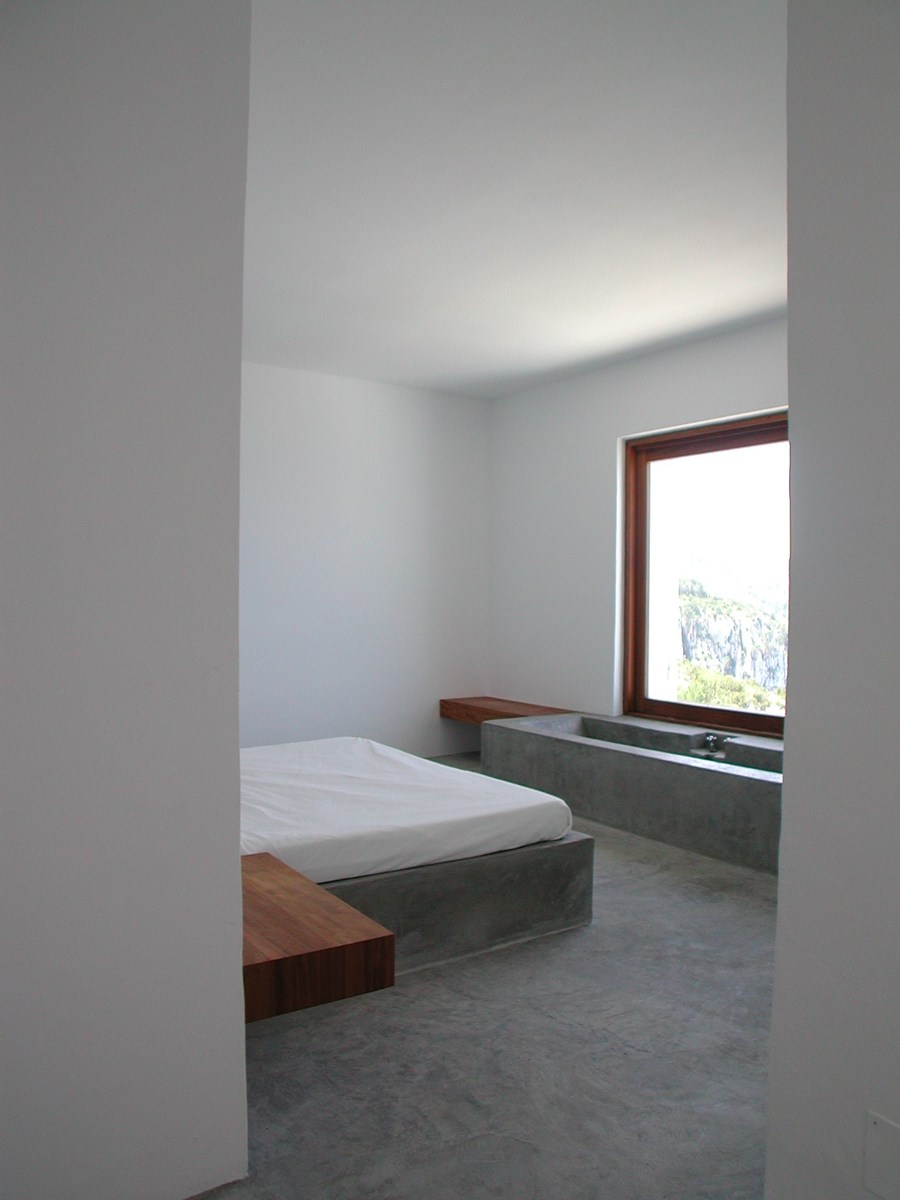 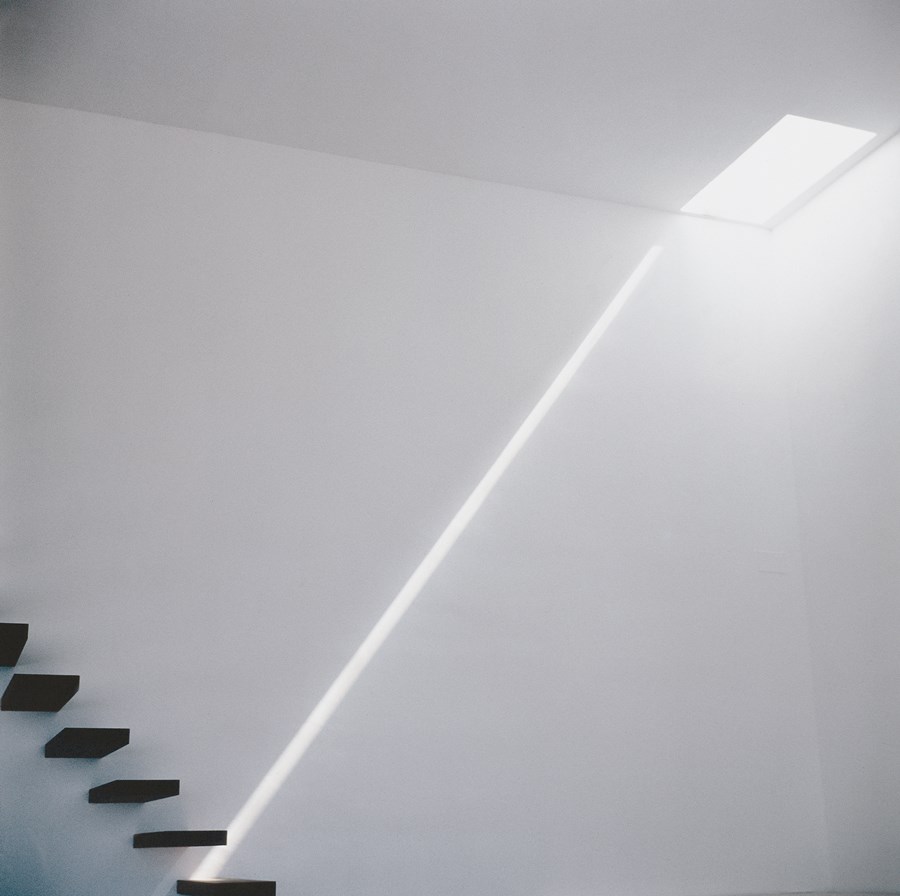 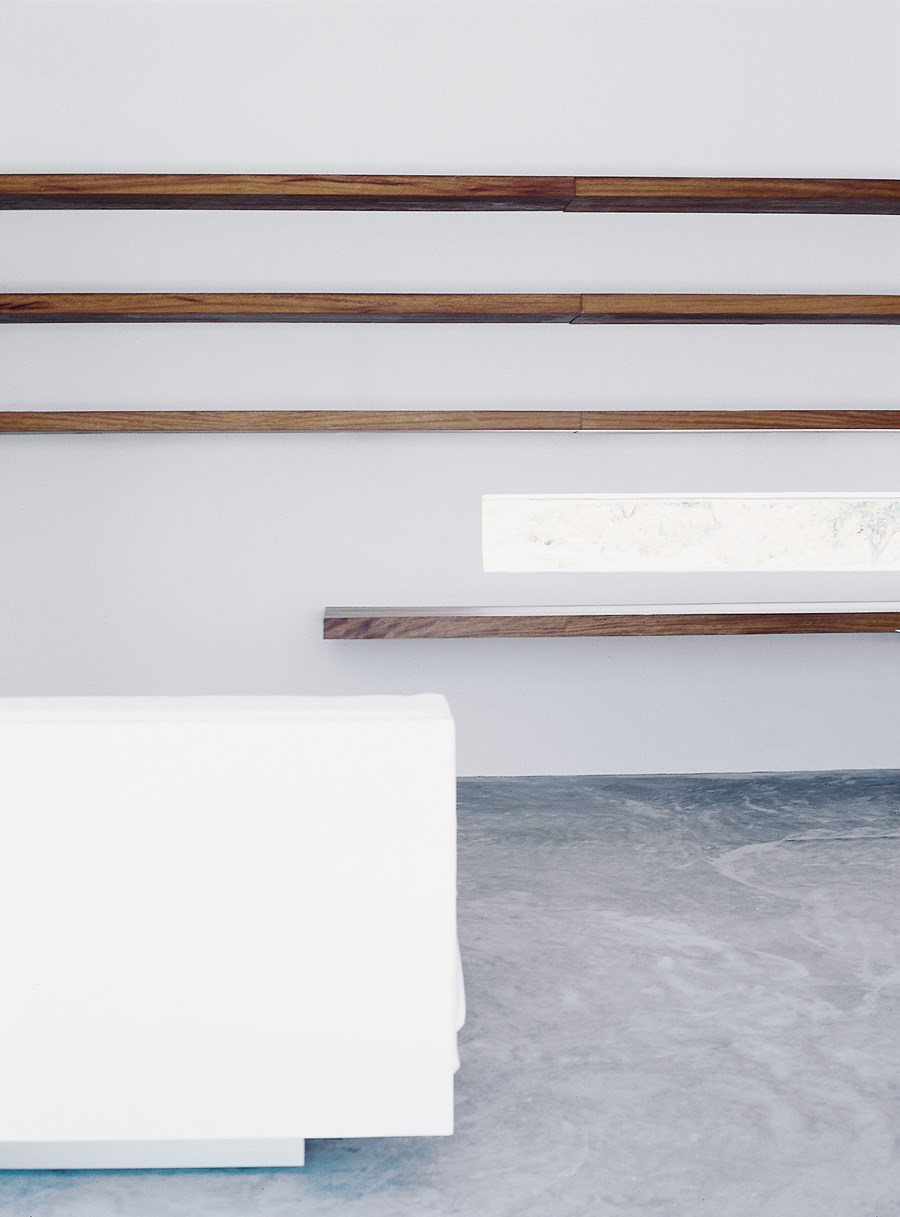 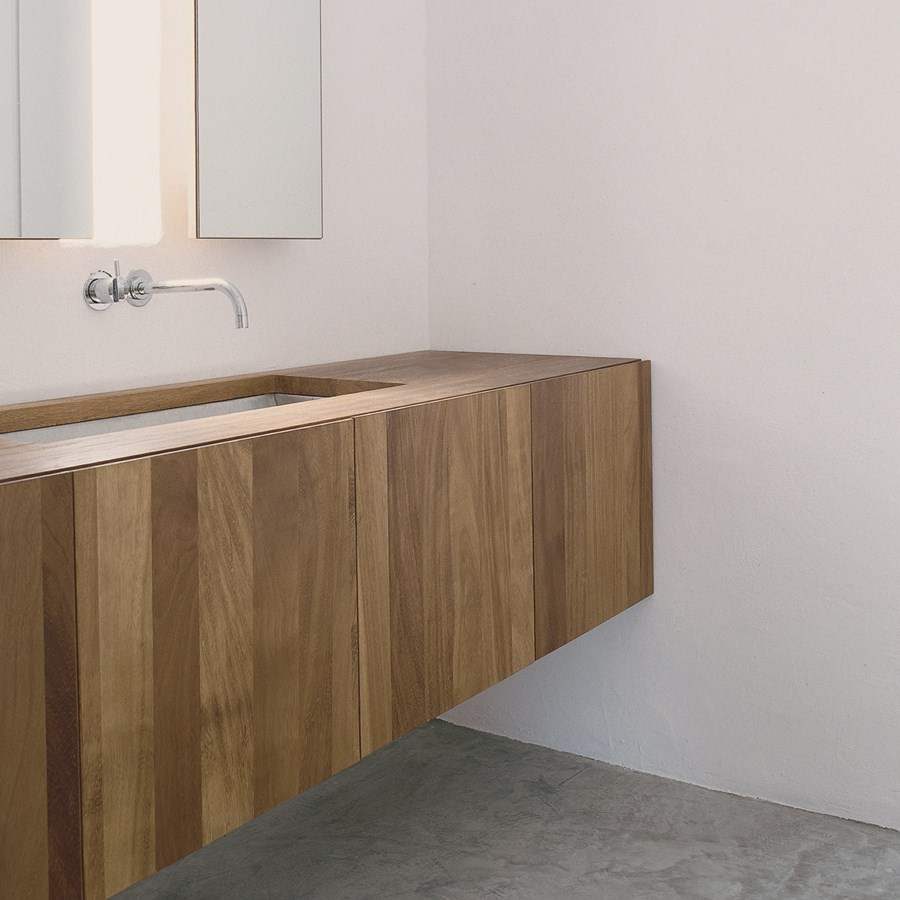 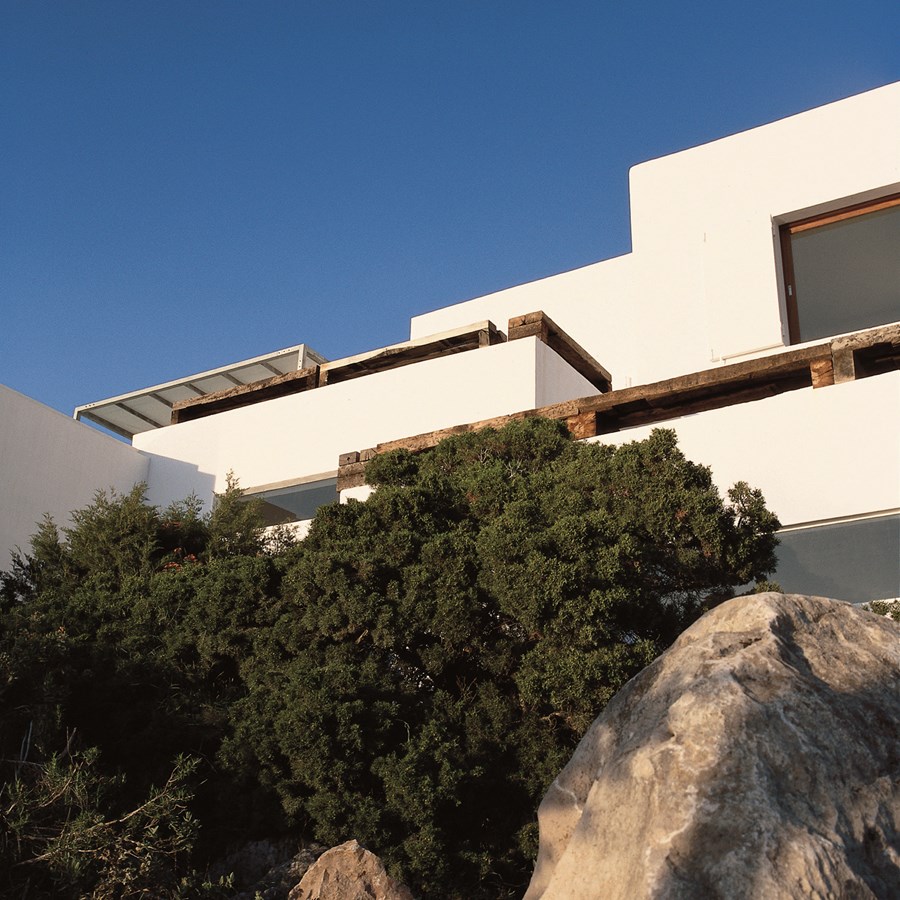 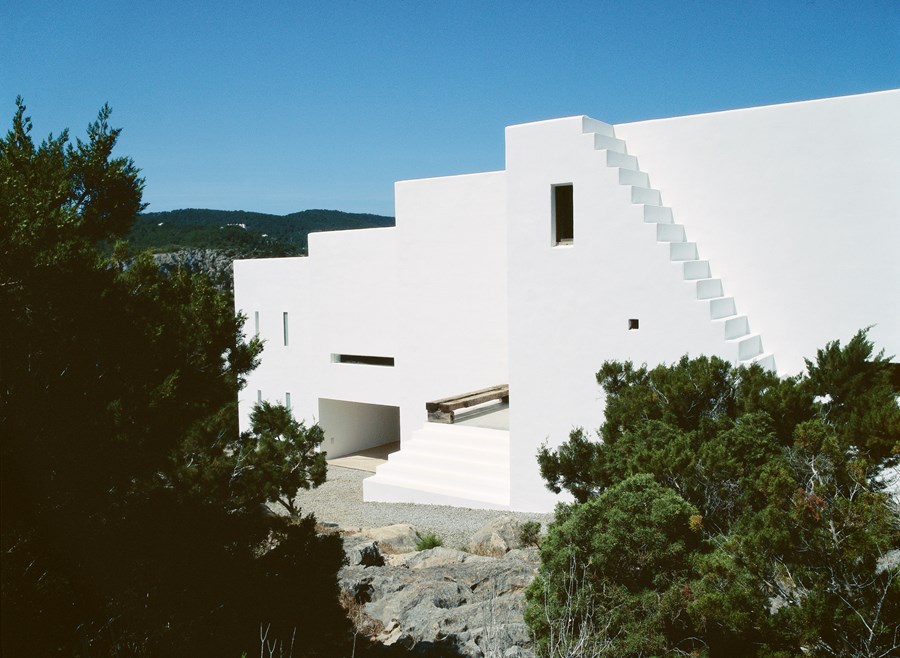 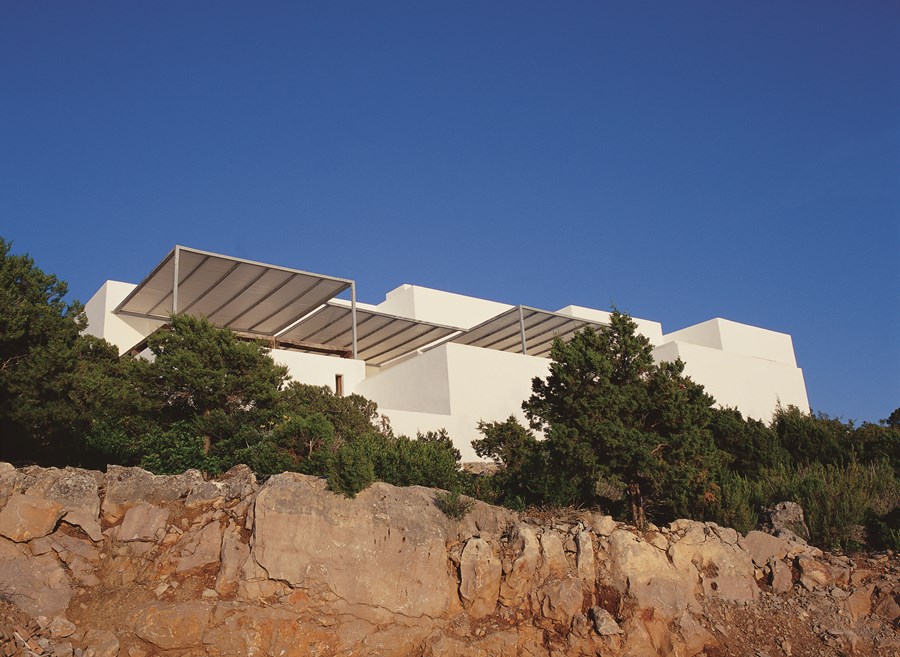 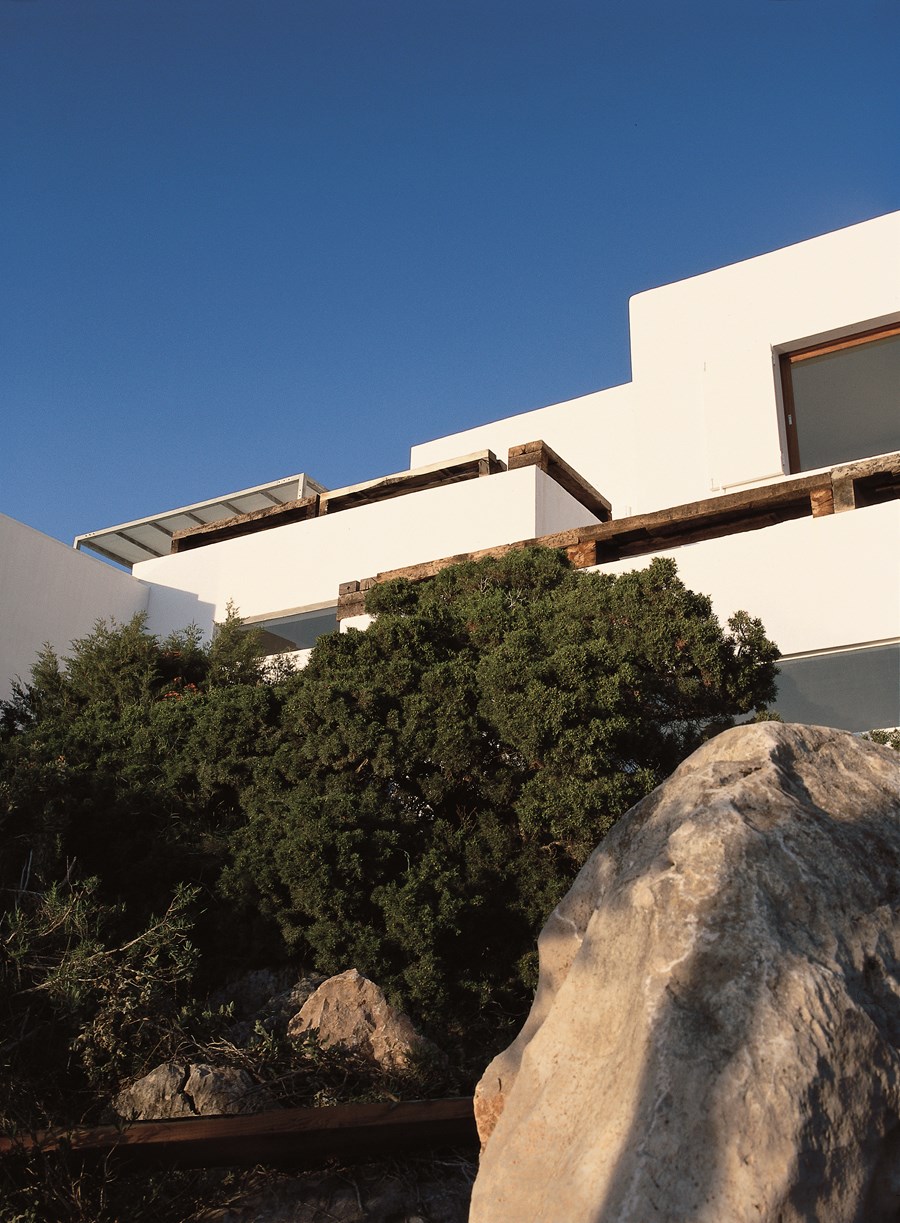 Outside, the layout of the terraces and the pool forms a visual perspective topped by the definite geometry of the volumes. The terrace serves as a plinth from where the views of the Mediterranean Sea are valued.
The prismatic platforms form a scenario from where the vision of the Mediterranean reaches its greatest intensity.
“Thanks to this artifice architectural, the Mayans totally changed the landscape and gave your visualexperience of a greatness only comparable to the greatness of their gods” JornUtzon
“We were looking for that the swimming pool would be one more element of the house, that it would be part of it , somehow giving you the sensation that are bathing in the sea.” Ramon Esteve
The façades of white clean and bare features are drilled to capture the light following an order marked by the interior configuration, in such a way that there is more surface of solid walls than openings. From the inside, the windows frame a panoramic view of the pool, which looks like a water sheet that merges with the sea.
The architectural disposition arises as a sequence of spaces that are opening from the inside to the outside, in an attitude of absolute respect to the environment: it is built with knowledge of the fragility of the territory and its limited capacity to accommodate images without diluting its character. A projects that gathers the joint ideas of the topography, the immediate sea and of the light.
The typology of the primitive indigenous traditional constructions was at all times an inspiration both formal and functional, due to the many advantages they pose in front of constructive forms are beyond the control of less adapted to the climate, the light and the complicated orography of the terrain.
“Na Xemena was the first design where I could firmly express my way of making architecture in several aspects: from the relation with the place, both physically and culturally, to the manipulation of the perception of the place in order to create a complete experience.” Ramón Esteve
“The geometrical patterns that generate the design allow a future extension”
The house was thought in its first stage in 1997 for allowing a continuous development based on its original guidelines, by means of creating a template that would help to develop its architecture, its interior design and its product design. Thus, in 2001 and 2003 it was possible to add several cubic volumes arranged in a sequence of spaces of different dimensions that become larger during the promenade.
“In line with our philosophy, some industrial design products are often made to answer the demands of a particular building. It was Our first attempt in the field of the industrial design.
We designed the Na Xemena Collection for GandiaBlasco because we couldn’t find any suitable furniture in the market for Na Xemena House in Ibiza” Ramón Esteve
This way, during the first stage of the design process, Na Xemena Collection was born in 1996, changing the world of the outdoor furniture through the idea of a global collection that fulfils all the requirements of an outdoor space.
The Na Xemena Lounger has been designed from an architectural point of view, with simple, rationally developed, constructive solutions. It is characterised by its elemental geometry (square, rectangle and circle), the shaping of its volume and the choosing of its materials.
These are the features of this furniture, free of any redundant element.
“The Na Xemena Lounger was designed from an architectural point of view. Its original idea is an elemental geometry of squared or rectangular prisms measuring 2×2, 2×4, 2×6 or 2×8. Thus, all the elements are always made according to these proportions”. RamónEsteve
Photography by Eugeni Pons and Ramón Esteve