Playground Apartment is a project designed by Brain Factory. The creative concept that gave light to the development of the project of this 65 sqm apartment located in the Prenestino district of Rome was dictated by a strong peculiarity of the client: his passion for basketball. 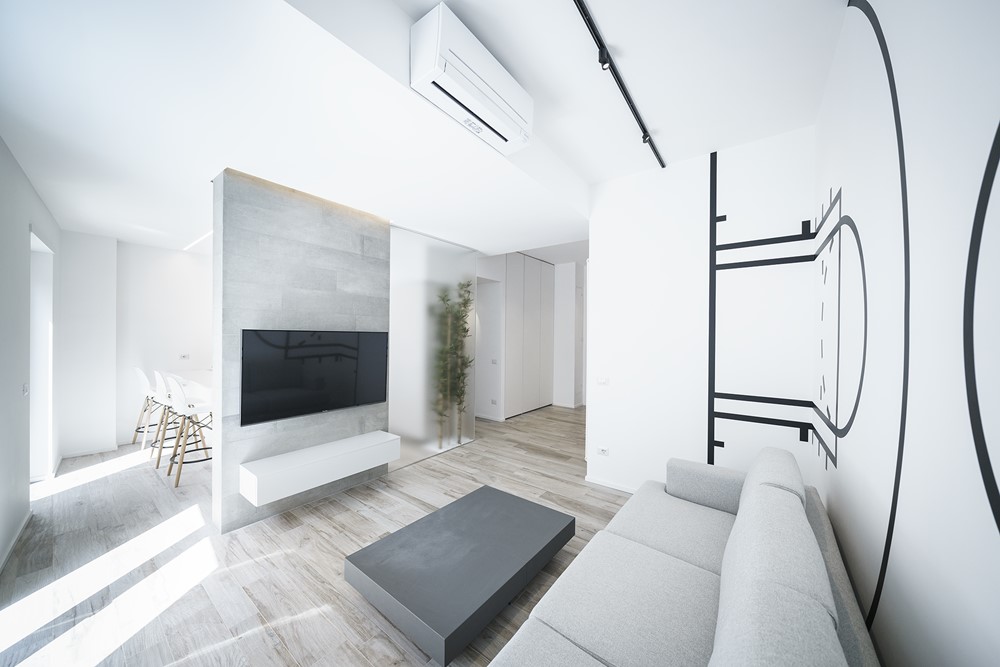 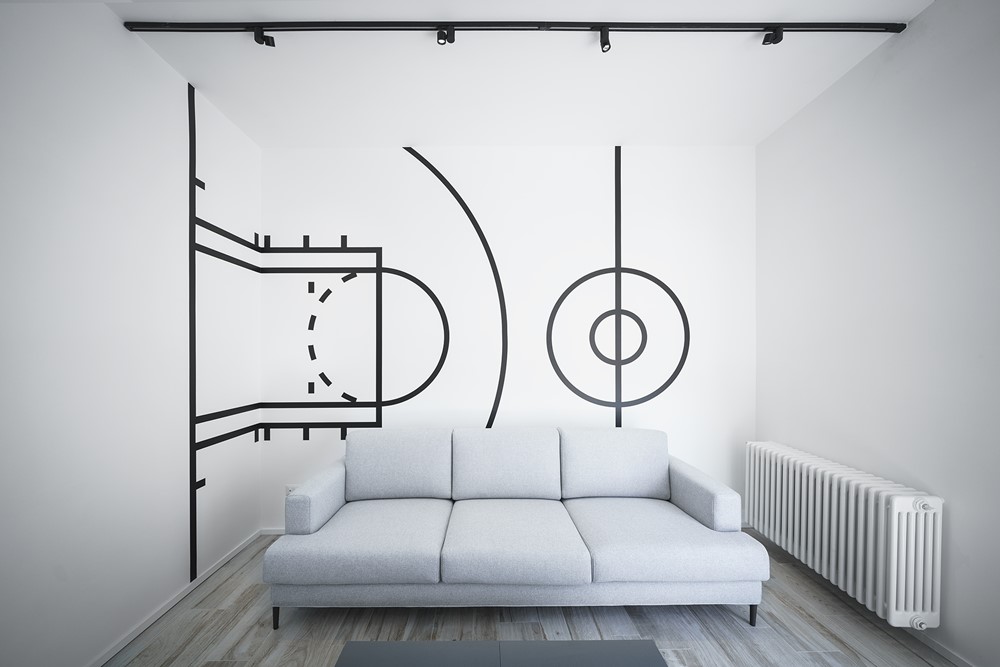 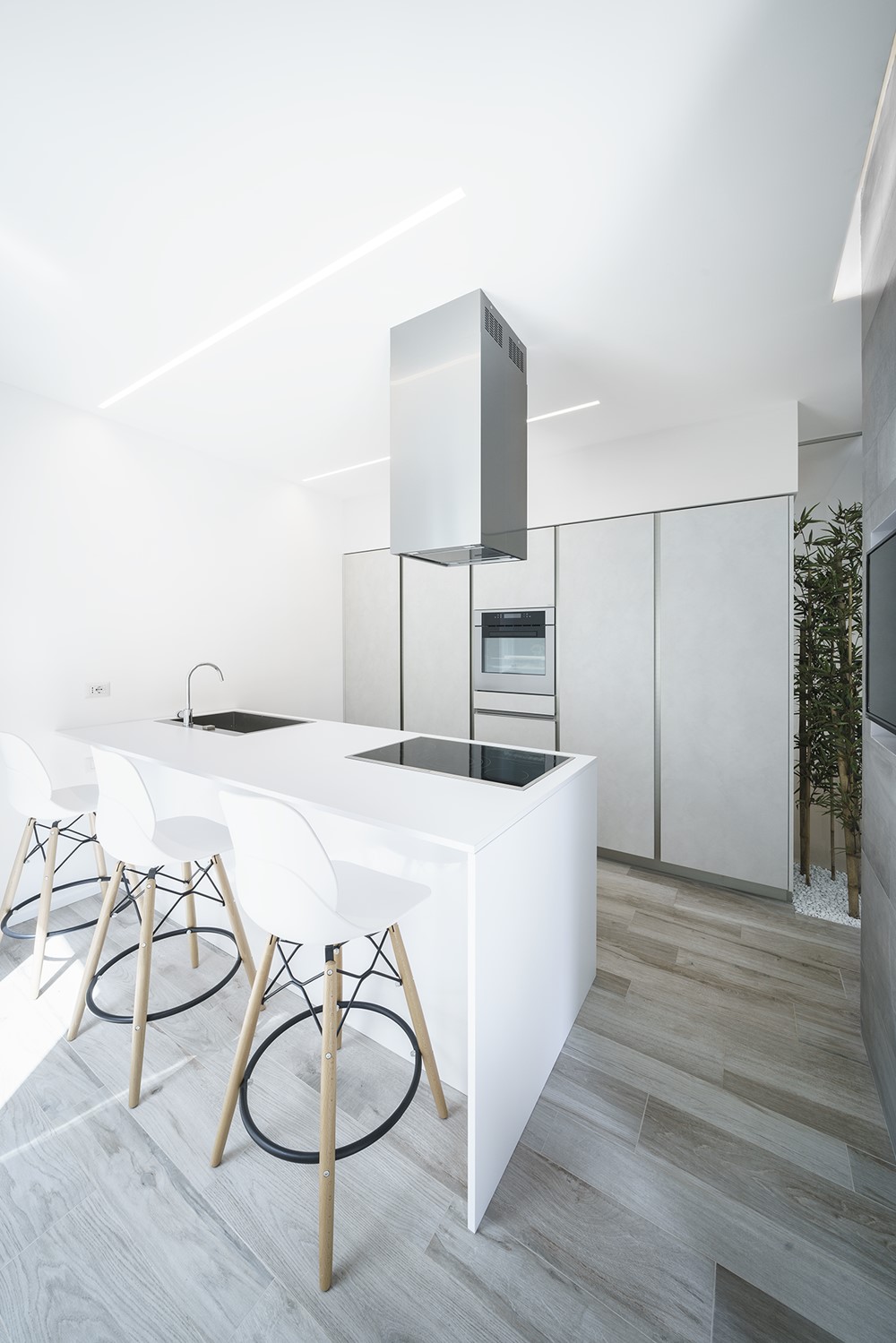 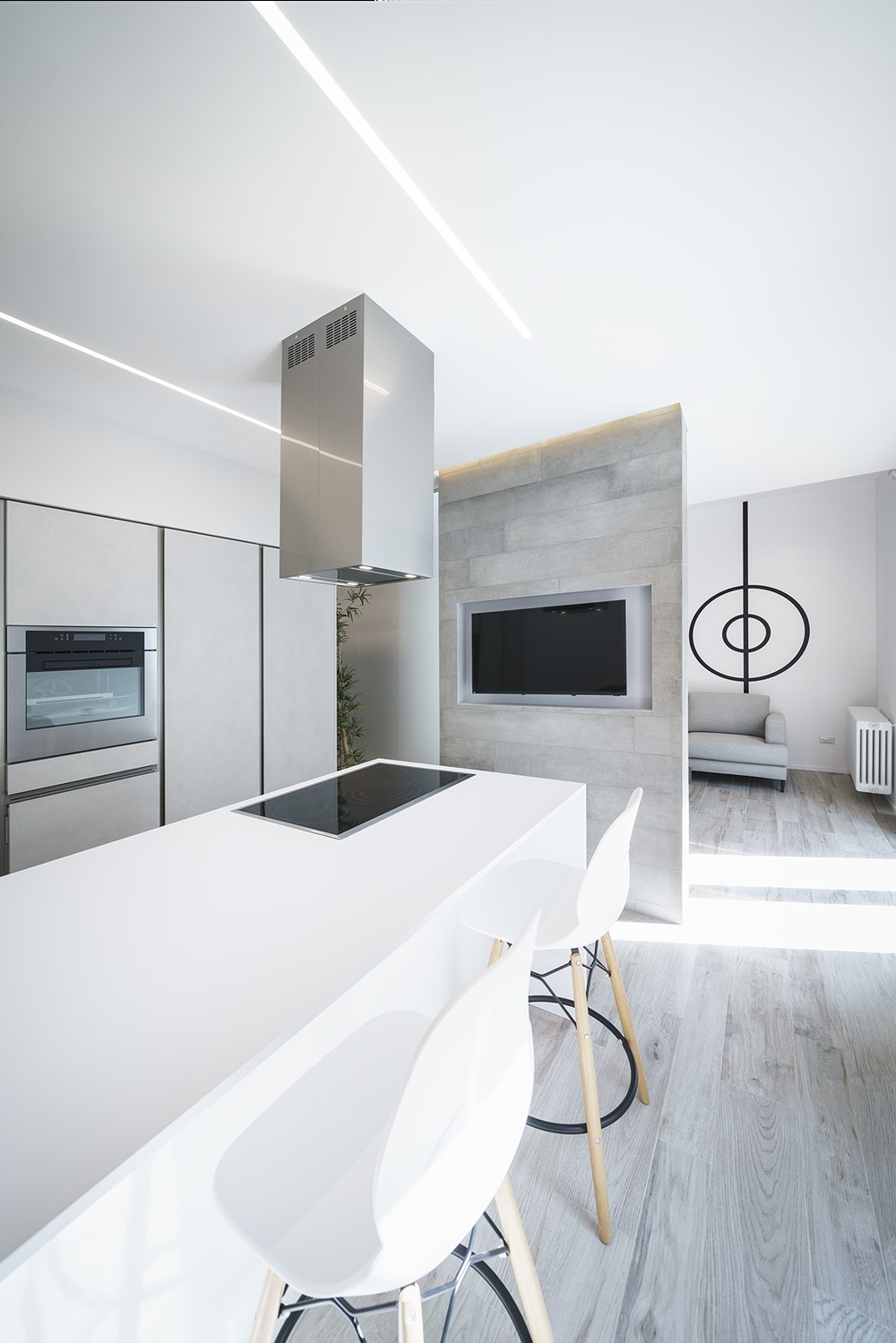 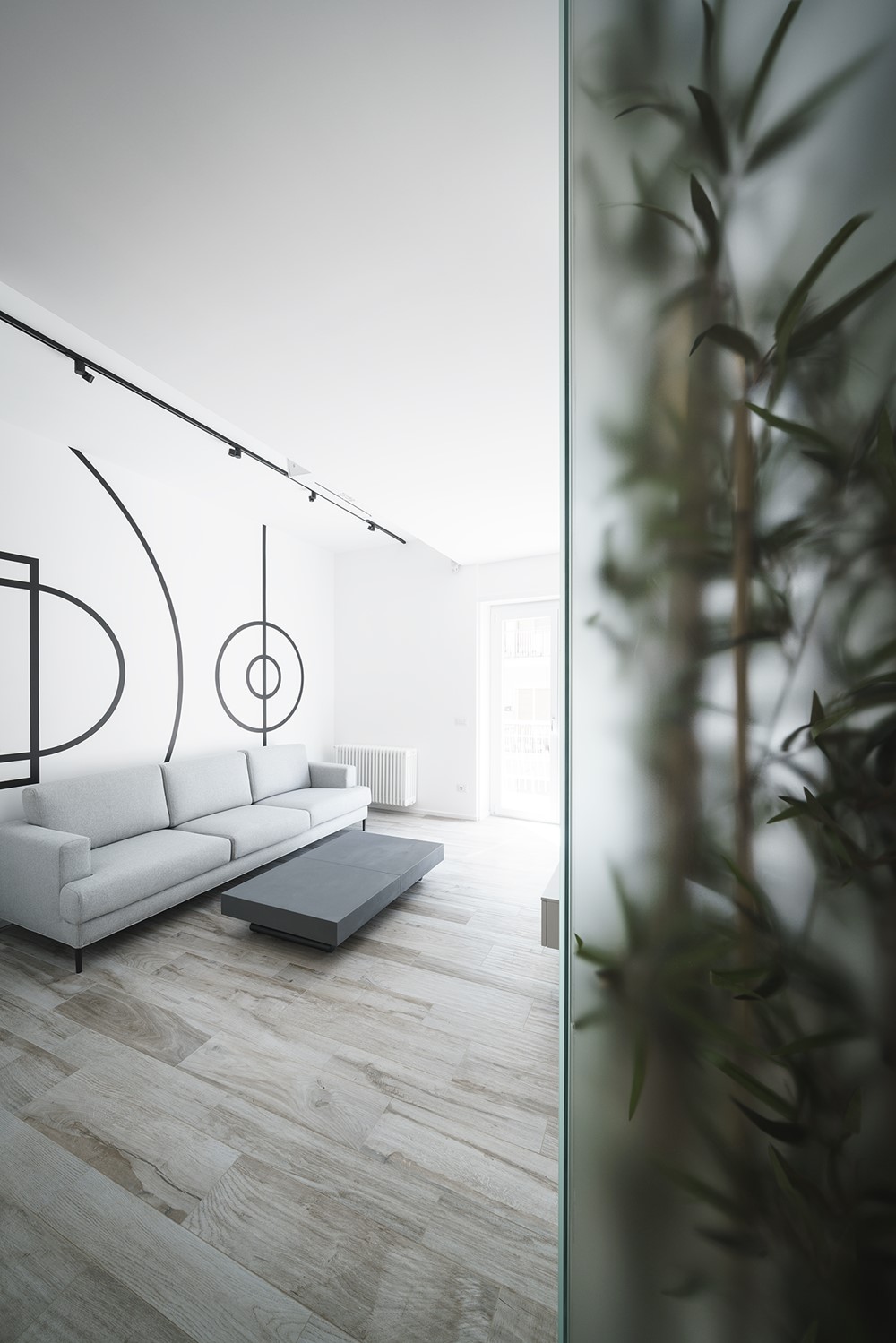 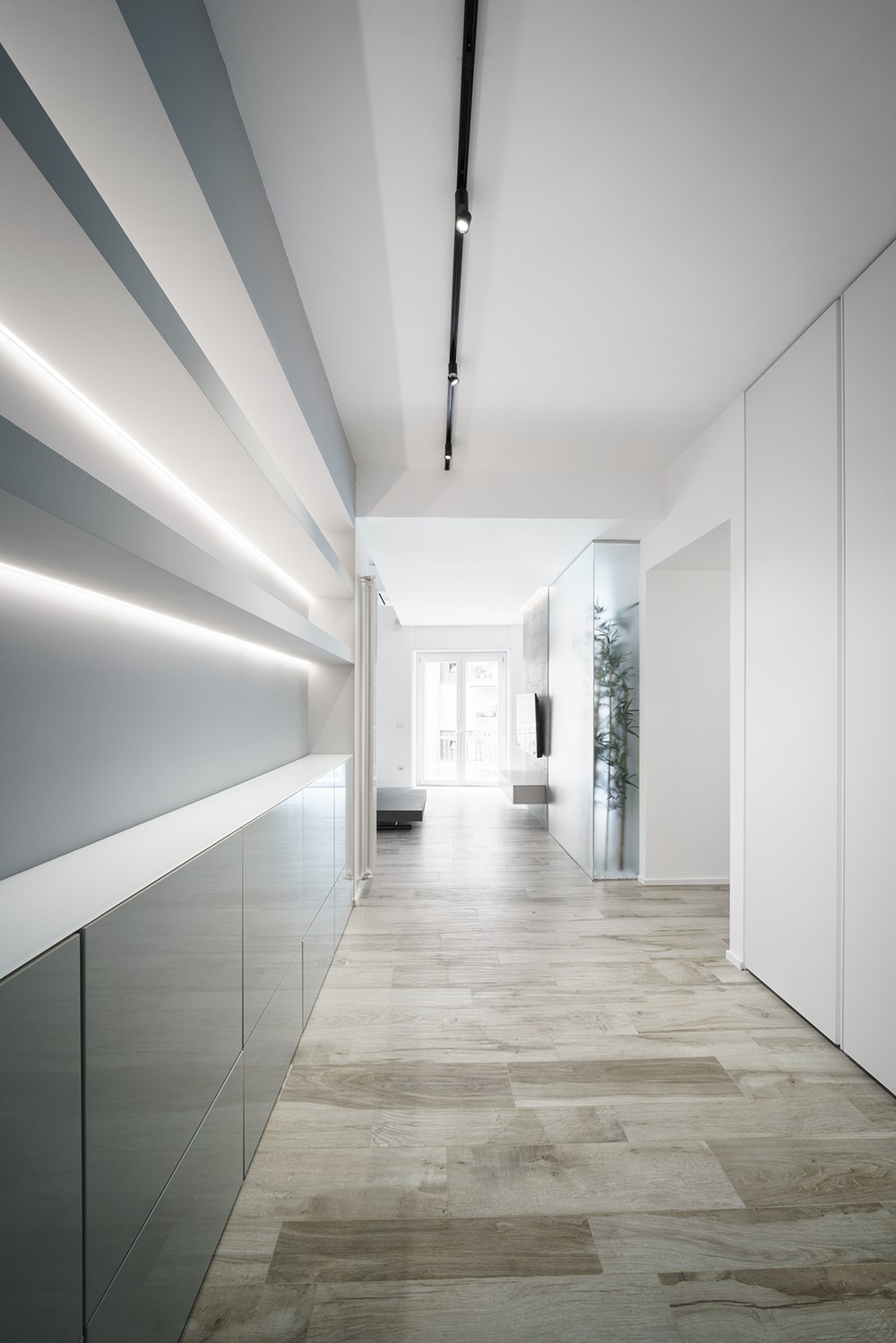 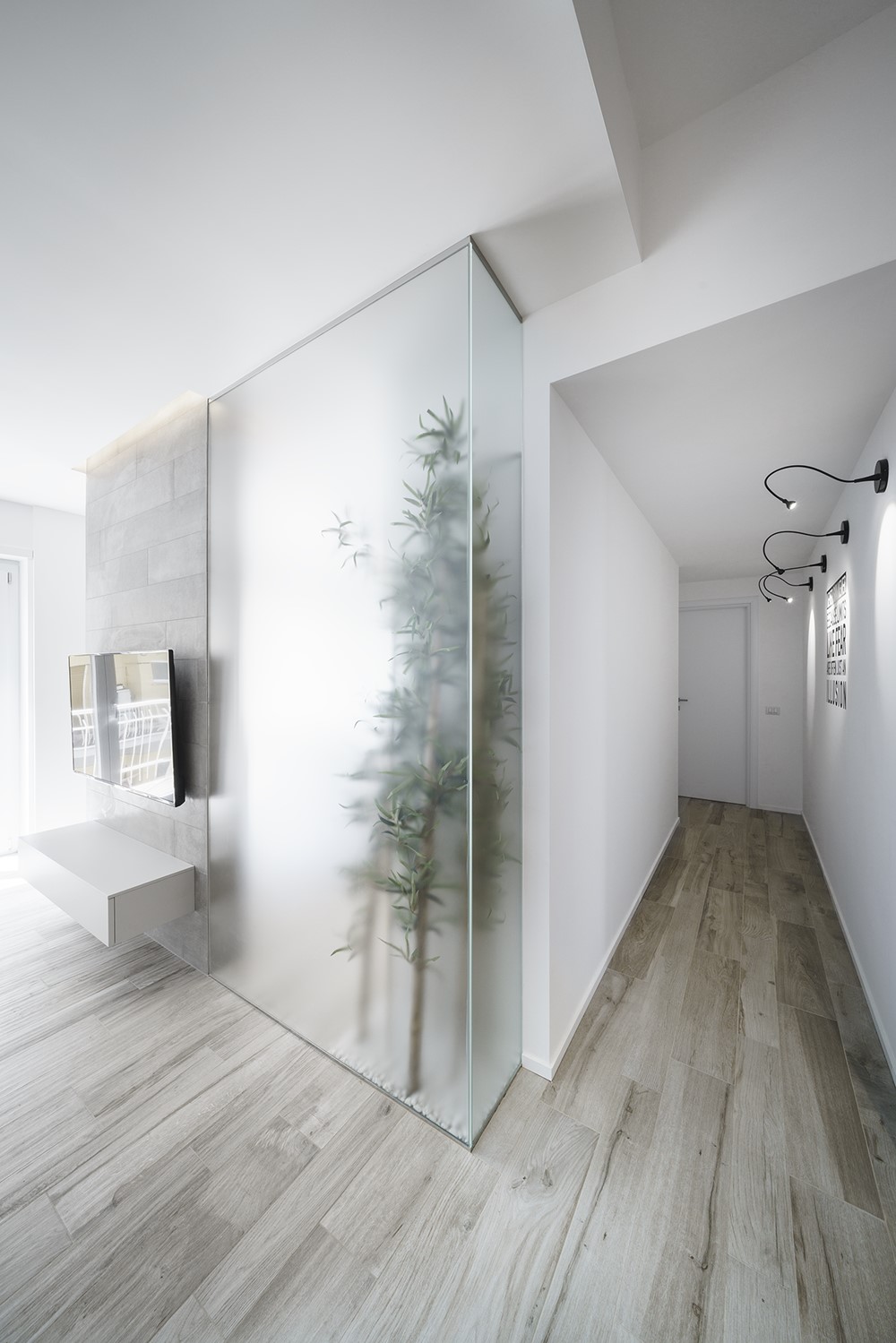 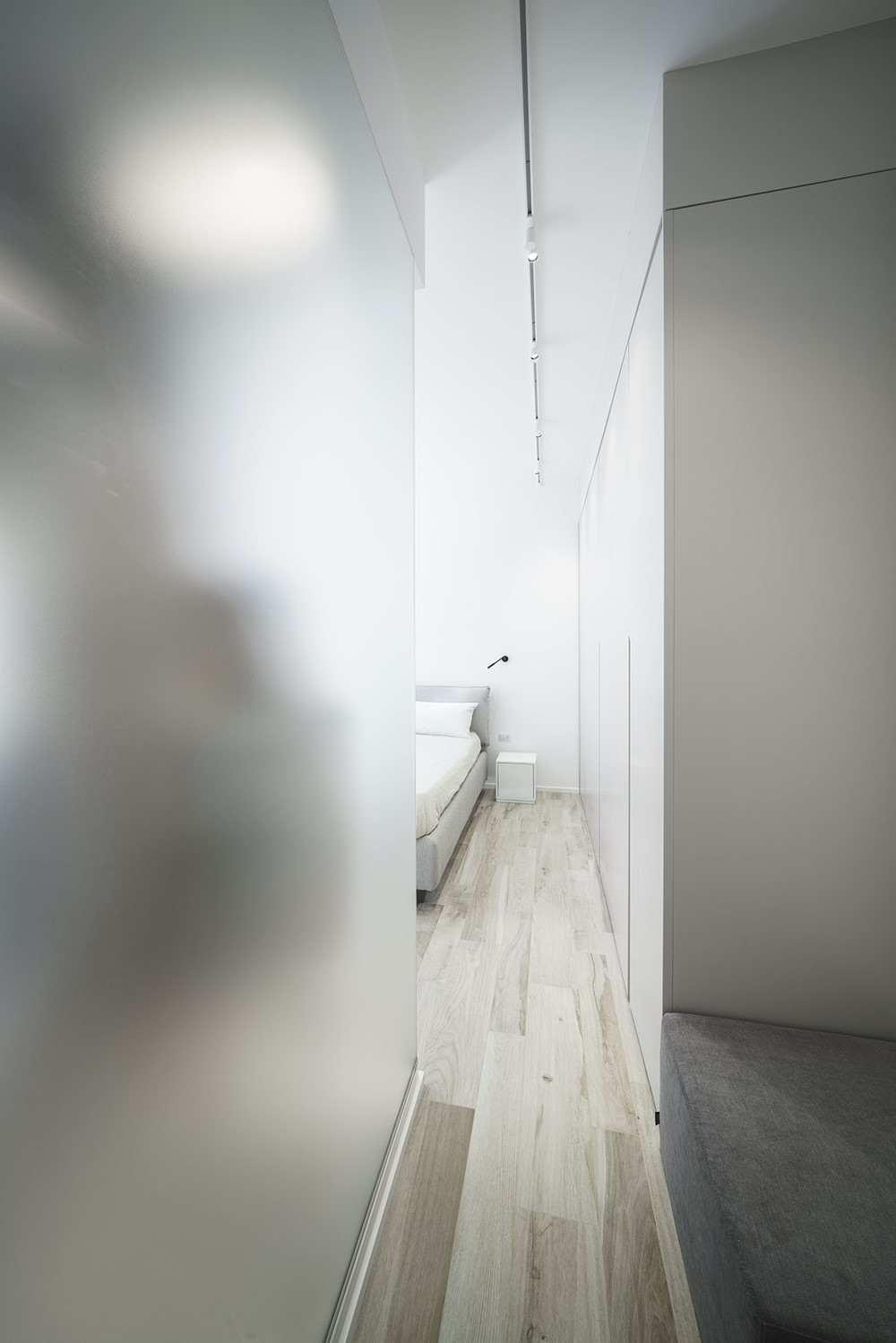 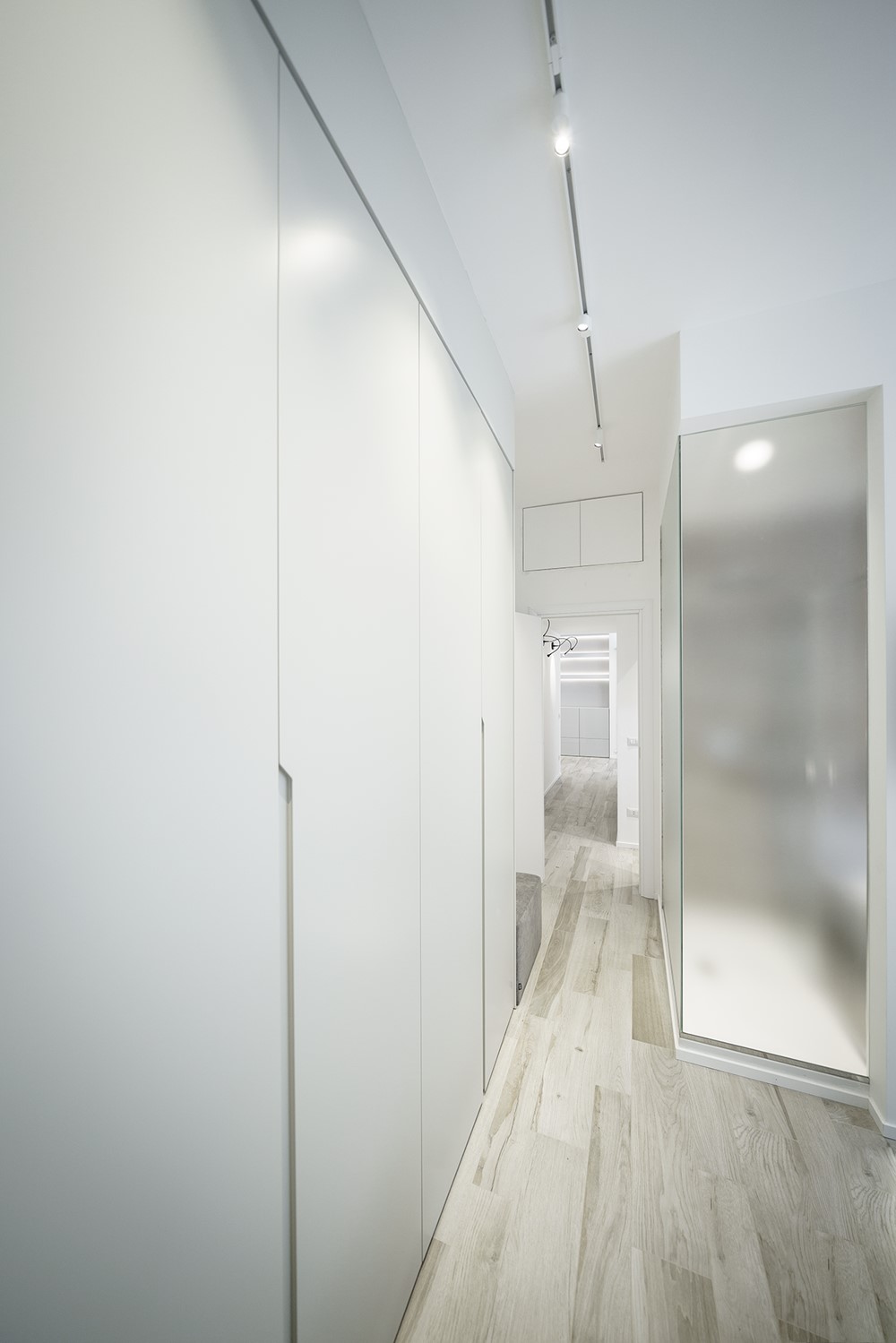 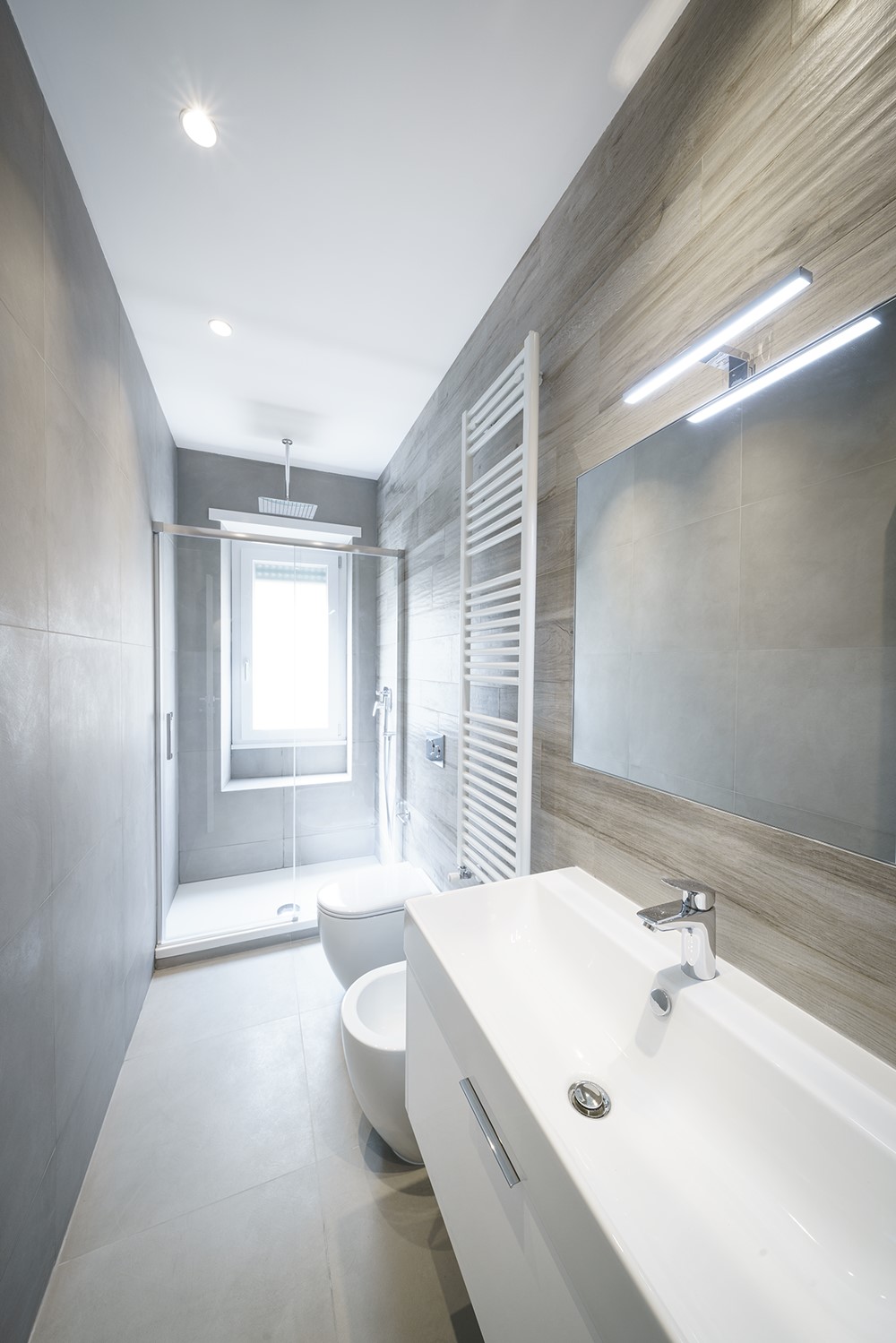 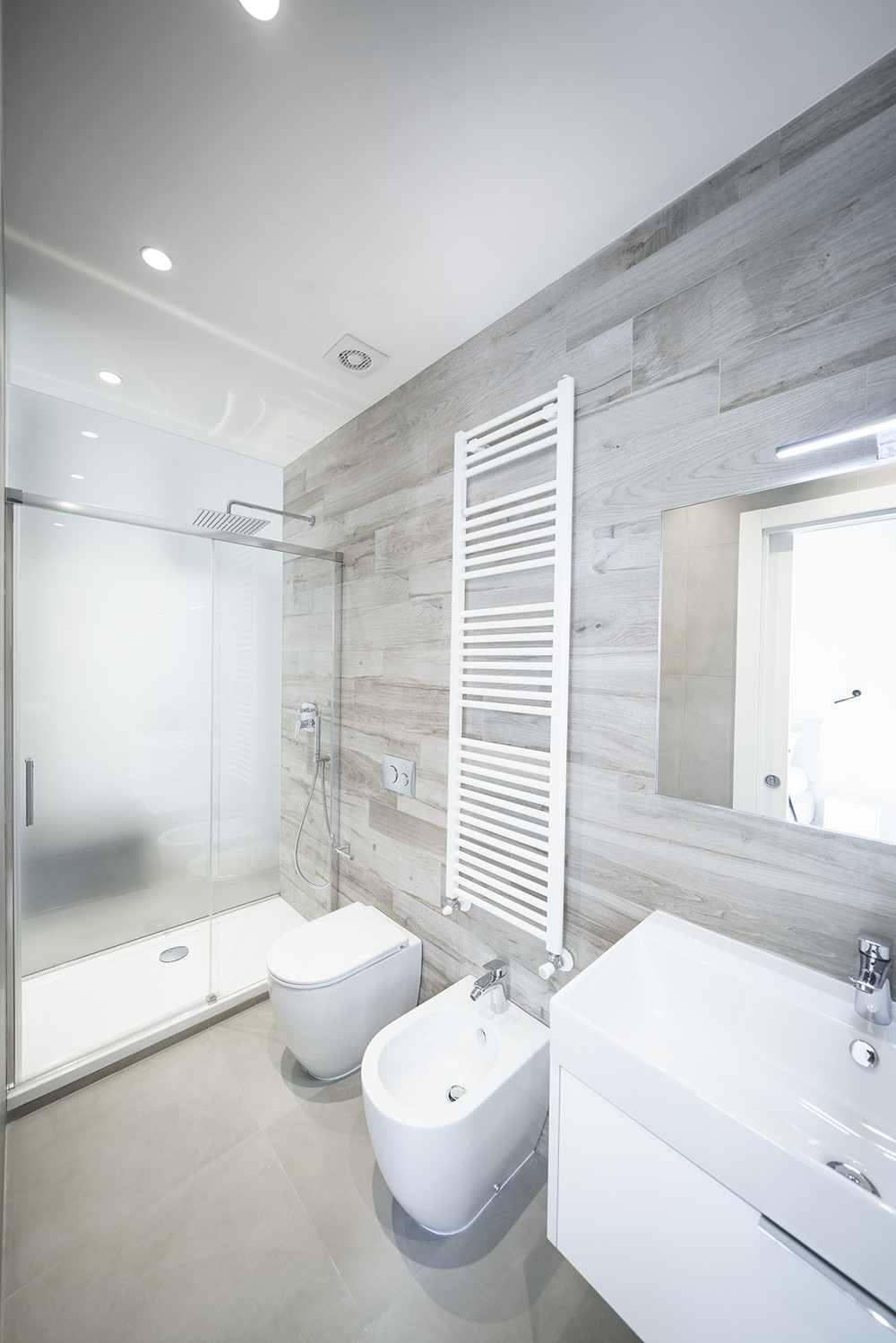 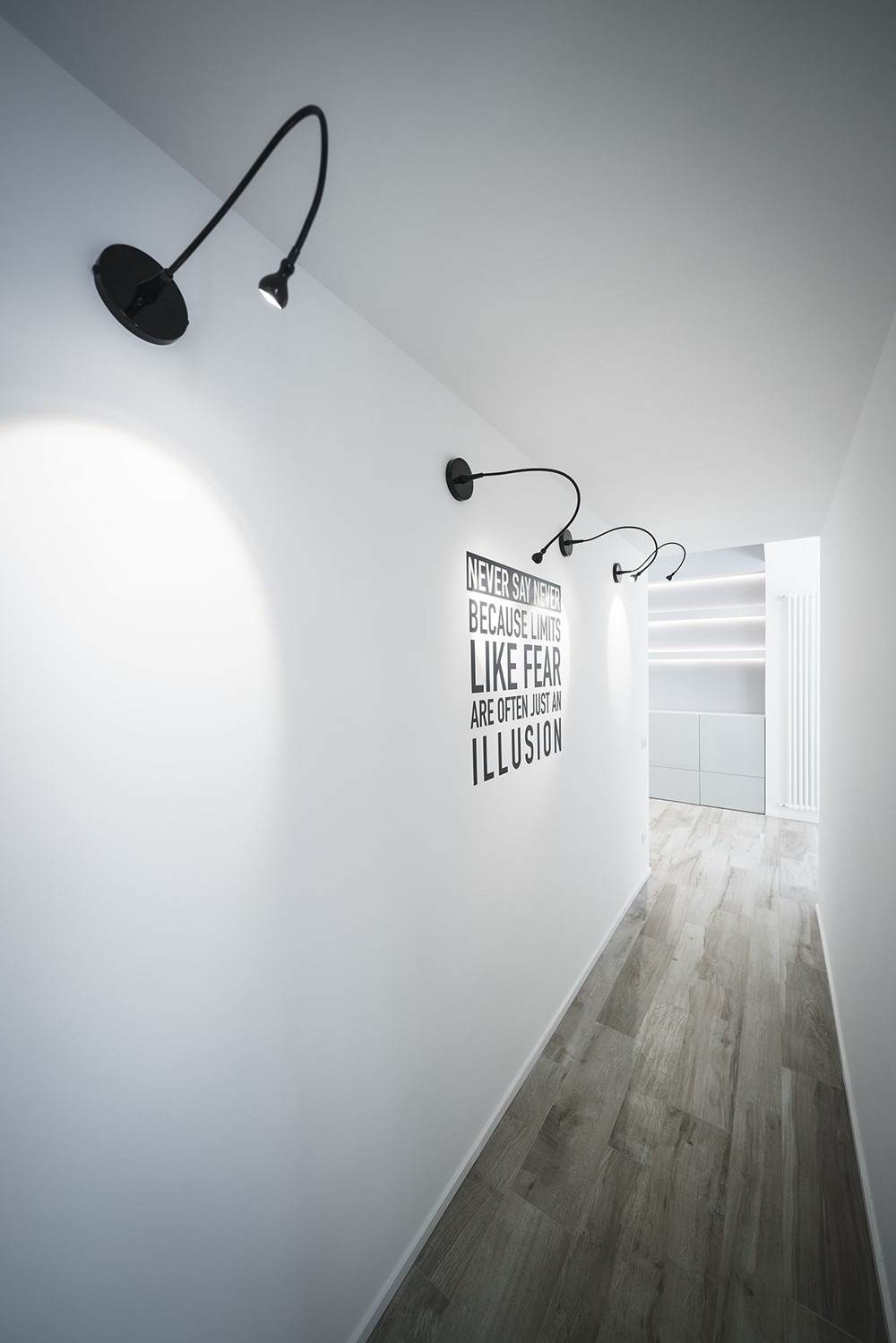 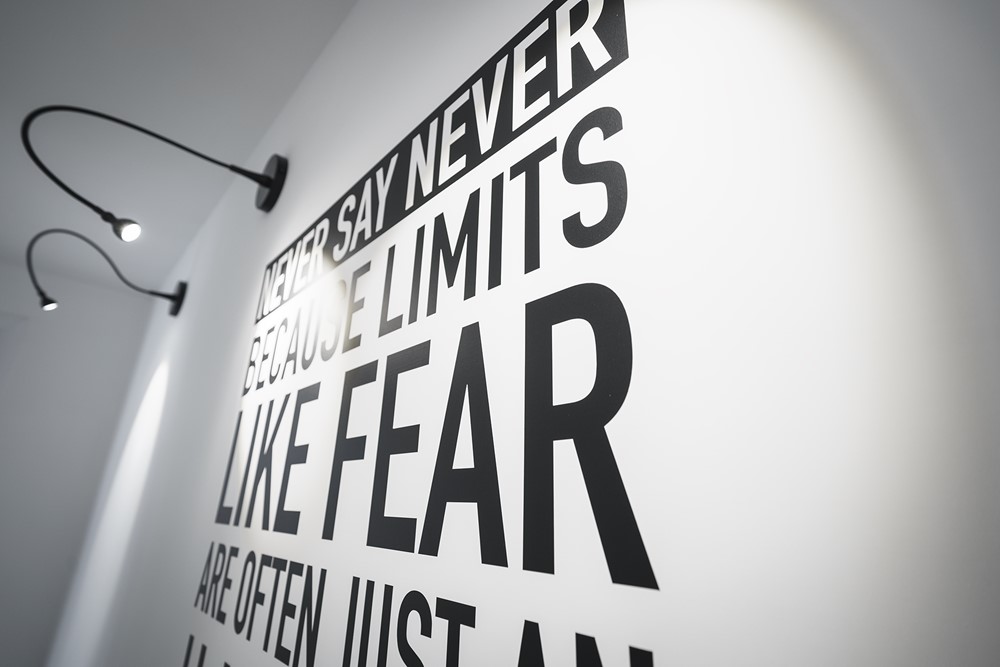 Hence the idea of conceiving space like a playground, revisited and adapted in a domestic key. At the beginning the apartment denoted a classic distribution of space with a living room, a small kitchen, a bathroom and a bedroom. The new articulation of spaces, instead, has favored a large open-space, developed around a nodal fulcrum: a material totem clad in cement-effect porcelain stoneware that separates the living area from the kitchen and houses the television on both sides. In addition, two bathrooms have been created with a minimalist and essential style, specifically, the bathroom in the bedroom, has a corner where the masonry leaves space at two extra-clear satin glass slabs that contribute to the reception of the natural light that filters through the window of the room in to the bathroom. Even the entrance is full of functional and at the same time scenic details: a wall equipped with plasterboard shelves has been created that, thanks to recessed led light profiles, seem to float lightly in space. Great importance has been given to the creation of storage compartments, both below the shelves and in front, thanks to the creation of a large wardrobe. To give a strong visual directionality towards the living room is a black light track with adjustable spotlights. The living room is playful, presents details with an urban character and the reference to the basketball court is evident thanks to the realization of a pre-spaced graphic applied on the whole wall made up of black PVC adhesive lines on a white background: there is also a visual corner of comfort and well-being created by glass walls behind which bamboo canes are positioned flush with the floor, creating a play of light and shadows. The kitchen has a practical and elegant island configuration in white, as opposed to the concrete effect texture chosen for the columns. A note by Michael Jordan has been placed between articulated lights on the wall of the corridor to remind anyone that the limits and fears are often an illusion, as in the architecture of this apartment the recall to the basketball court is only lthe beginning of a domestic life to be played.
Photography courtesy of Brain Factory