This 6,240 square foot Mercer Island Home designed by Coates Design Seattle Architects was originally built in 2003. The current homeowners have ultra-modern taste in interior design and furnishings and were looking for a transformational update to the home’s interior spaces to suit their lifestyle and aesthetic. Photography by David W Cohen. 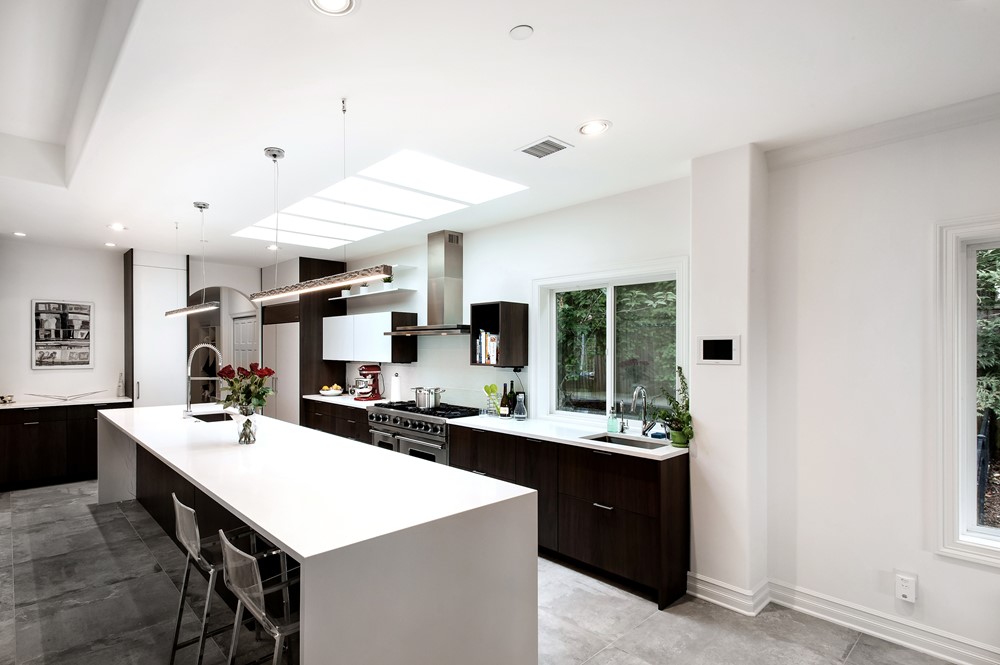 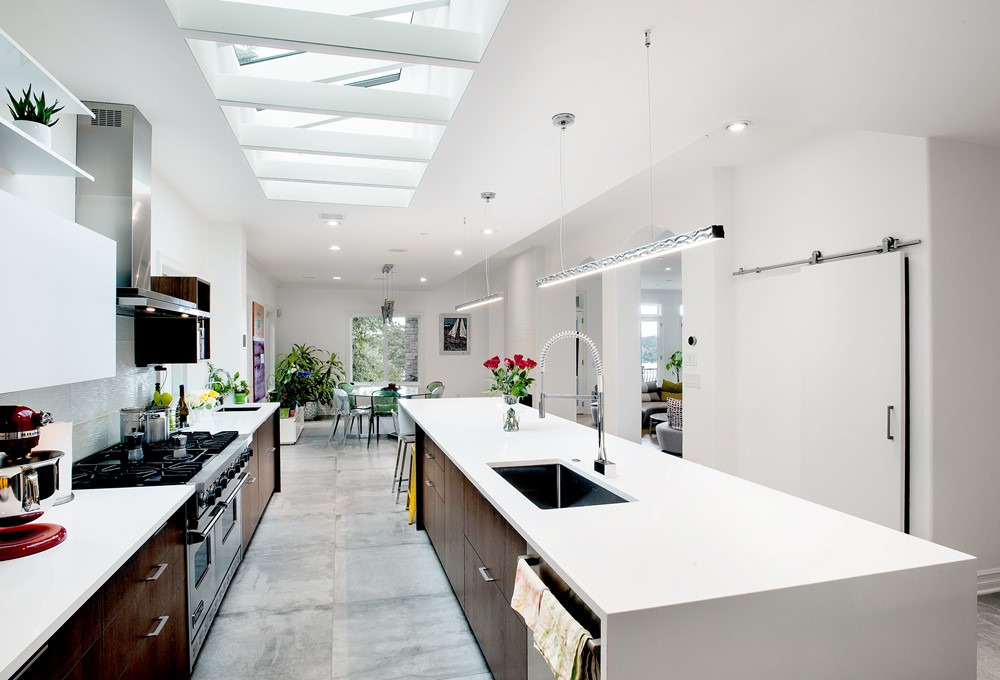 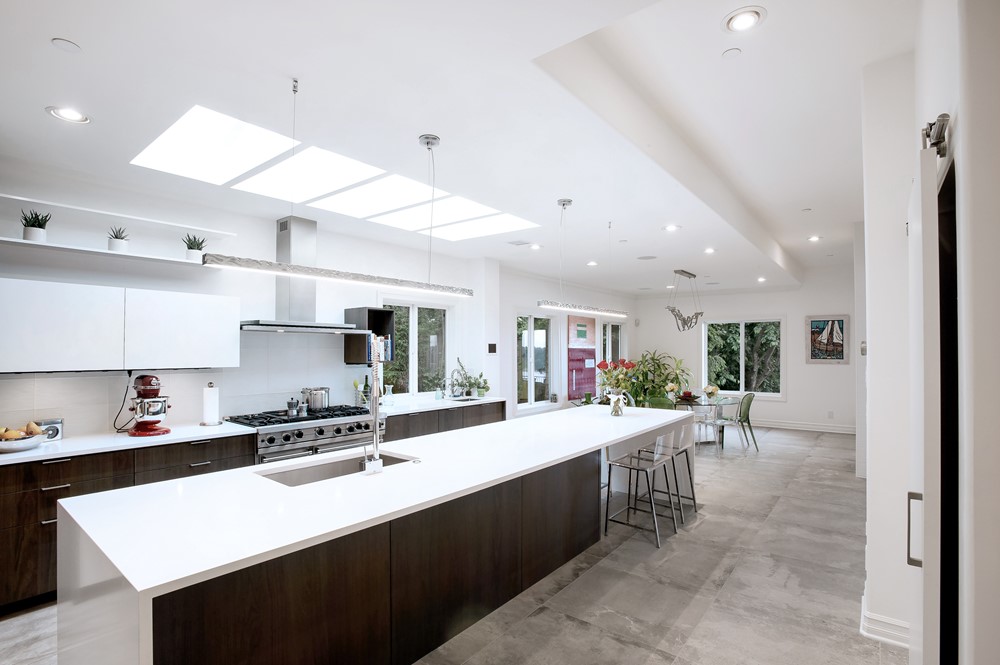 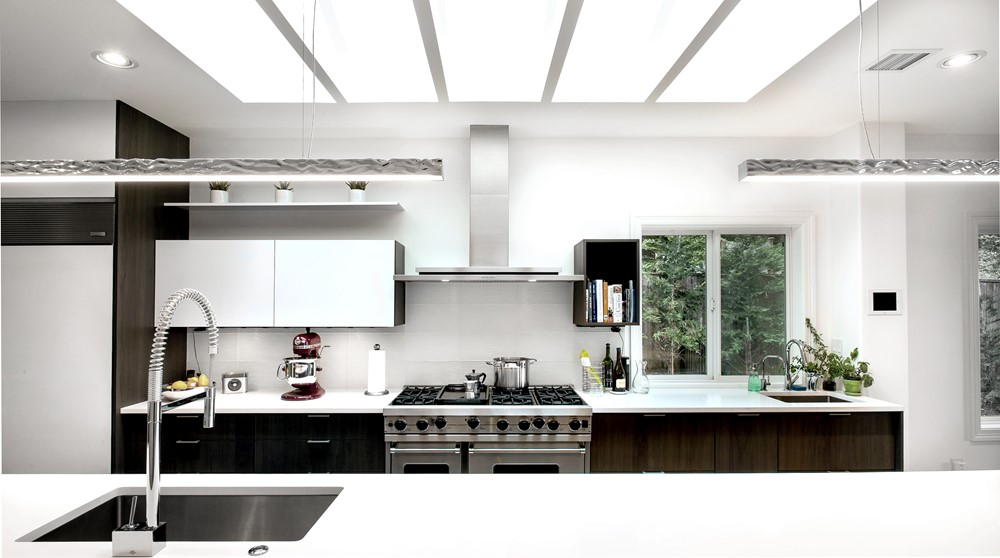 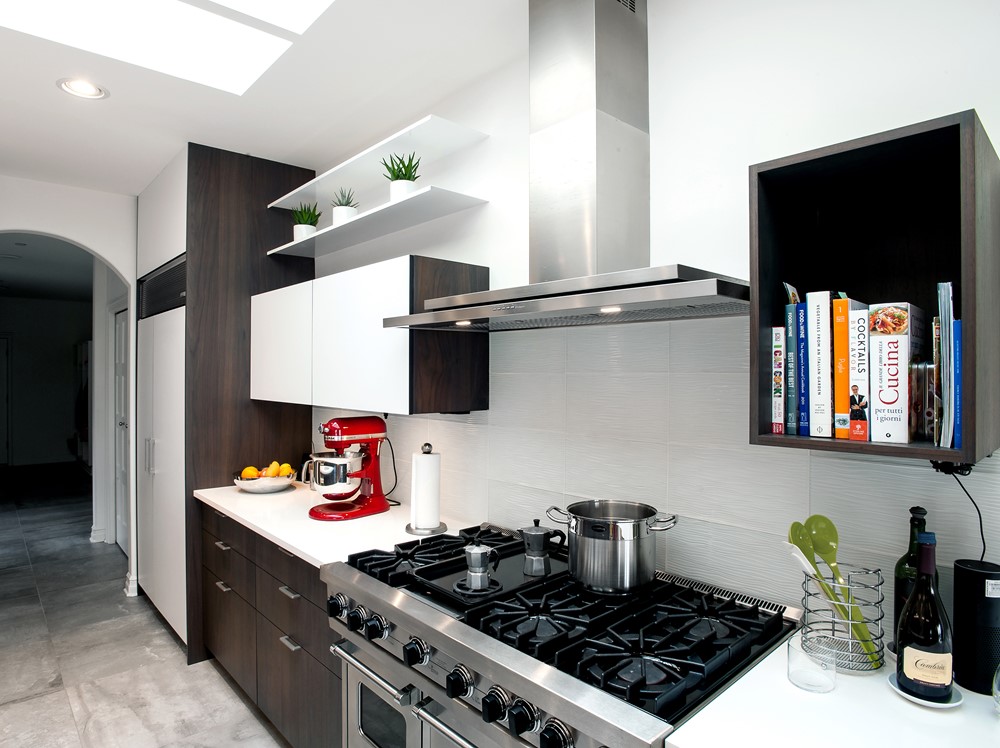 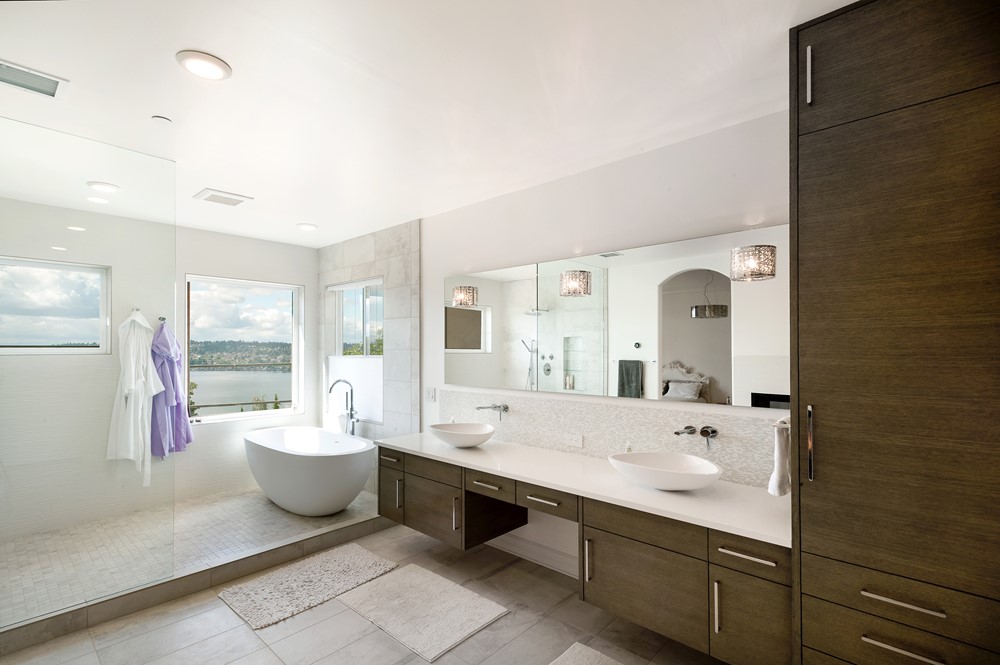 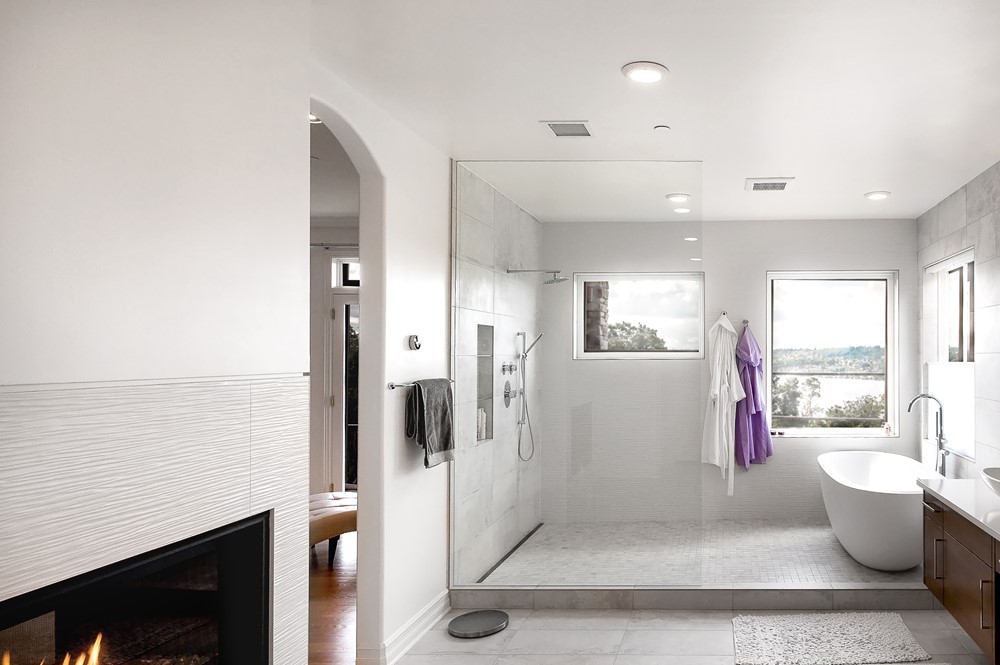 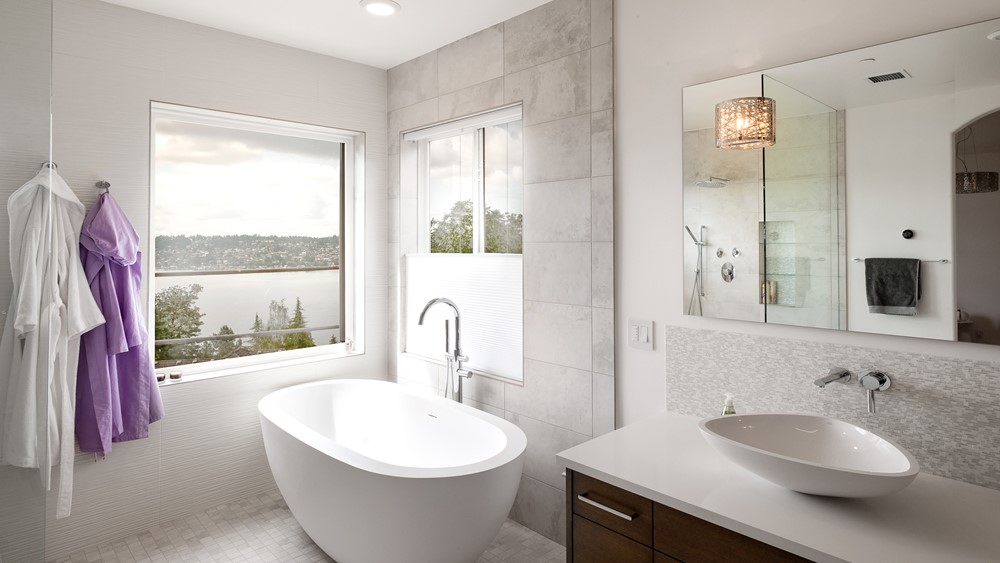 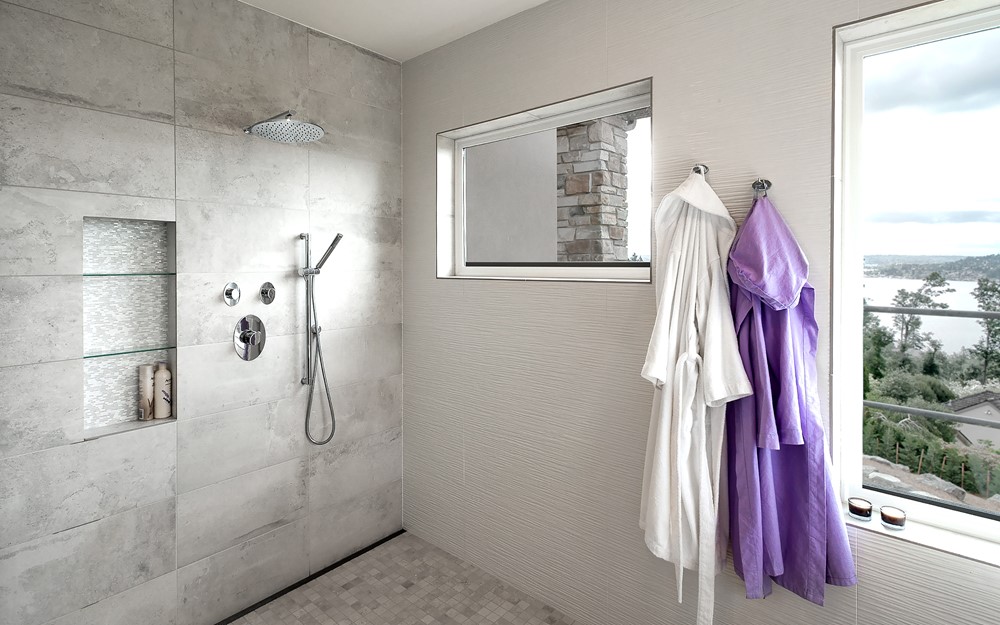 KITCHEN:
To achieve the clients’ goal of transforming the traditional kitchen into a sleek, modern, and functional open space, the design team reinvented the entire kitchen, retaining only some major appliances. The first step was to fill the space with more light – the original kitchen had only a single window. A large skylight was added, flooding the island and cooking area with soft, natural light. New modern pendant fixtures, relocated recessed lights, under-cabinet LEDs, and programmable LED lights hidden in the skylight and under the island seating area further enhance the kitchen’s new features and clean lines.

Traditional wood cabinets were replaced with striking modern ones that combine dark grey walnut finishes below and stark white laminate finishes above. The cabinets were strategically placed to create a variety of storage options, allowing the clients to personalize the space while maintaining both the function of the kitchen and the openness of the room. The sink was relocated to the new, much larger central island that was not only a more practical placement for it but also helped to create a more open and inviting kitchen. The island, which is almost 15 feet long, has a gleaming white quartz countertop with waterfall edges. One end of the island is fully open for casual seating and there is more seating on the side opposite the cooking area. To replace the awkward transition from slate tile to hardwood floor that existed between the kitchen and dining room, large floor tiles were installed throughout both spaces in order to create a continuous surface throughout the living and dining area, unifying the two.

This project was a complete transformation—nothing remains from the dated appearance of the original kitchen. In its place is a warm, livable modern kitchen with clean lines and an enjoyable space for the clients to cook, entertain, and relax.

BATH:
This dated 2003 master bathroom was transformed into a luxurious and sleek spa-like experience – recapturing the views of Lake Washington and featuring the fireplace to create an inviting, light-filled oasis. A custom modern floating vanity with generous seating was installed. Out-dated sinks, faucets, and countertops were replaced with ultra-modern basins and wall-mounted fixtures. An awkward soaking tub and shower were transformed into a stylish combined bathing area, separated from the vanity by a single-glass partition. The new shower has a minimalist linear drain, elegant accent tile, and allows for privacy while enjoying views of Lake Washington. The existing, two-sided fireplace shared between the master bedroom and bathroom was completely replaced and updated.

Nothing remains of the dated appearance of the original bathroom after this full transformation. In its place is an inspiring space with clean lines and a subtle color palette for the clients to relax and feel rejuvenated.