The “Apartment H+M” project comprises the restoration of a 130m2-apartment in a classic Viennese old building on the piano nobile of a house that was built at the turn of the century. It was designed by destilat and is located on ÄußereMariahilferstrasse in Vienna’s 15th district. 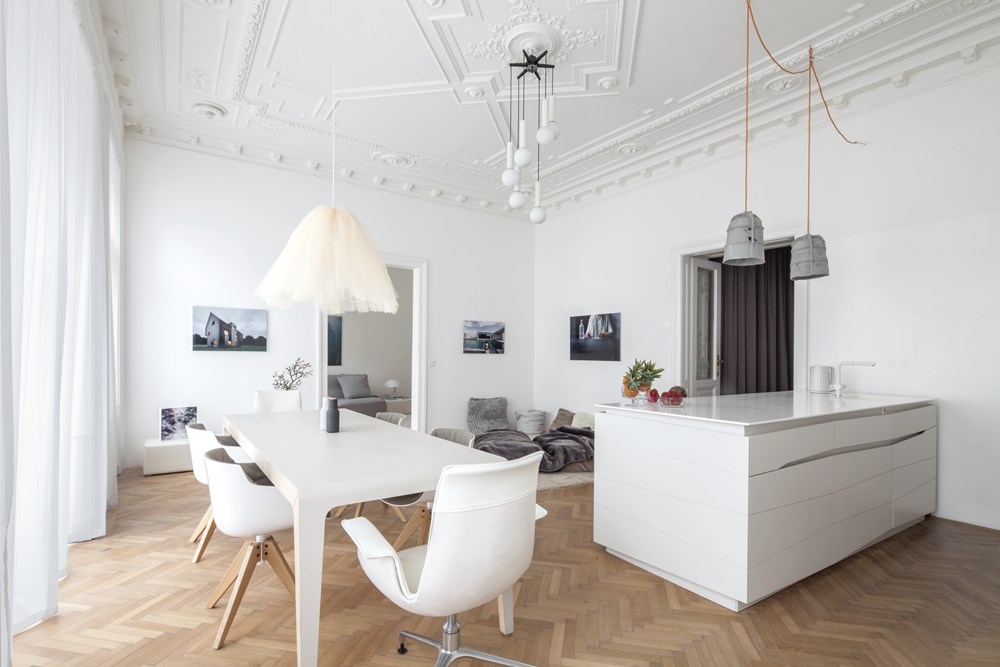 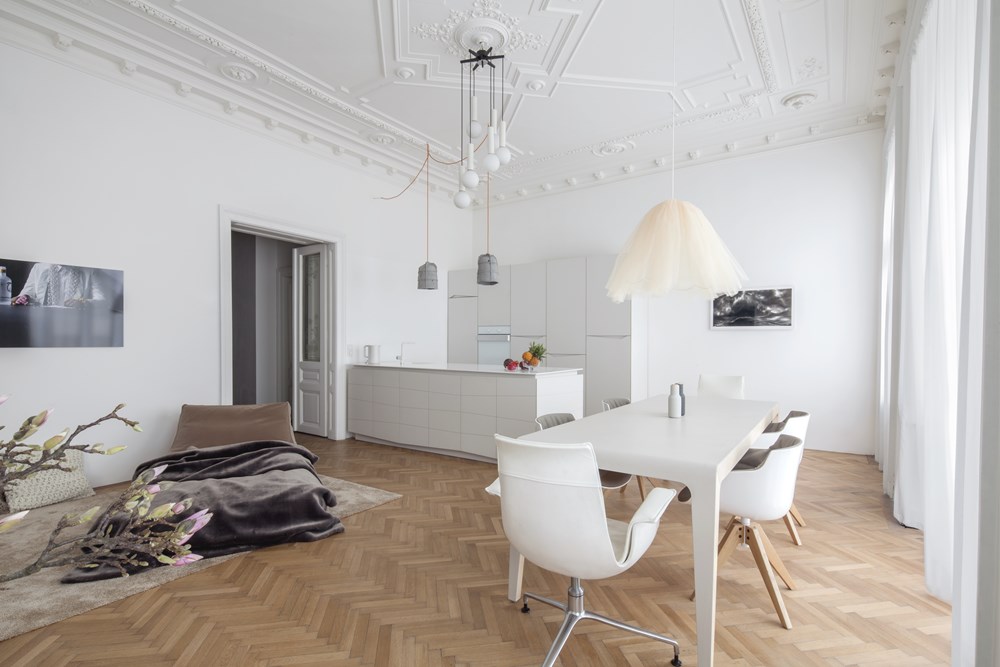 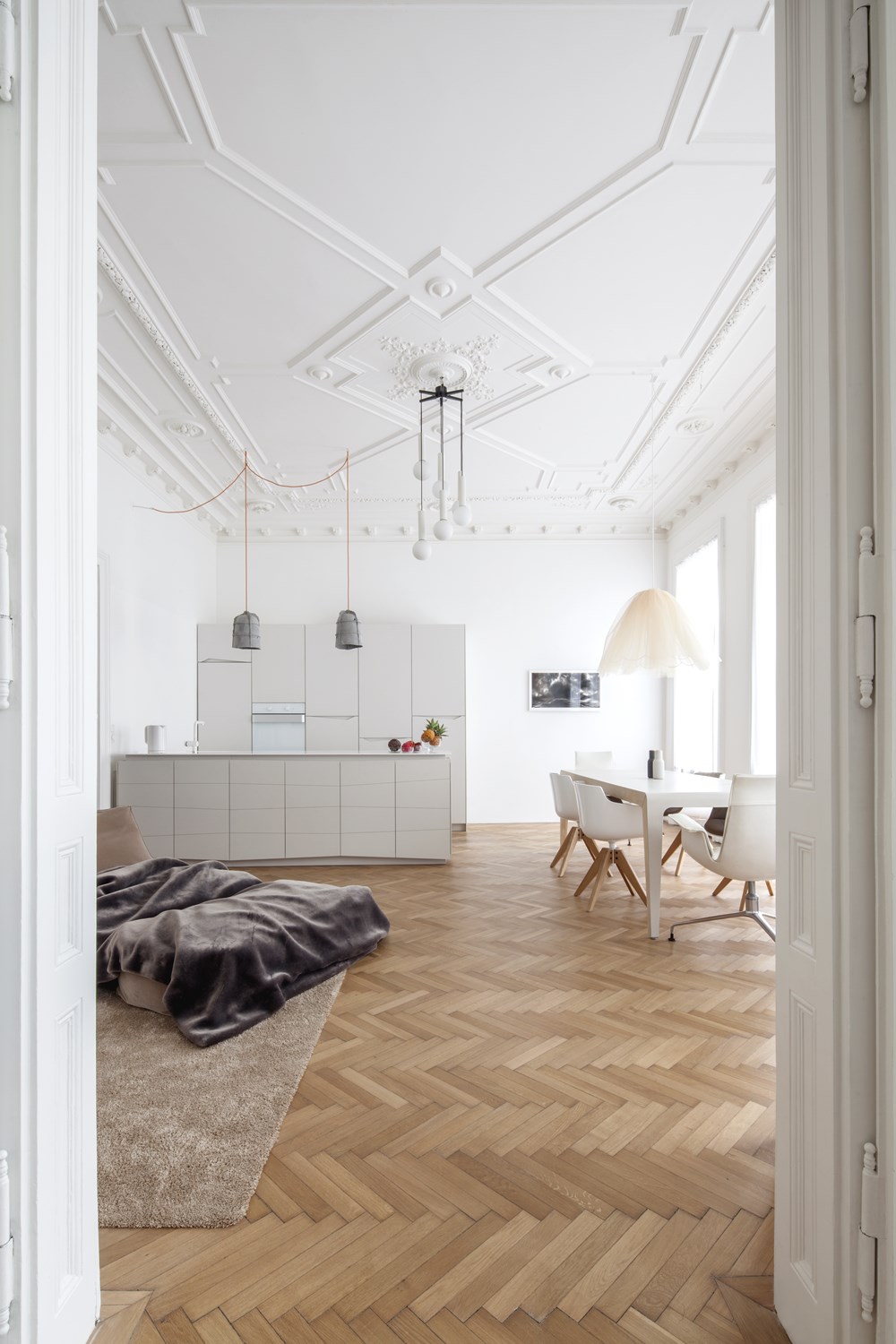 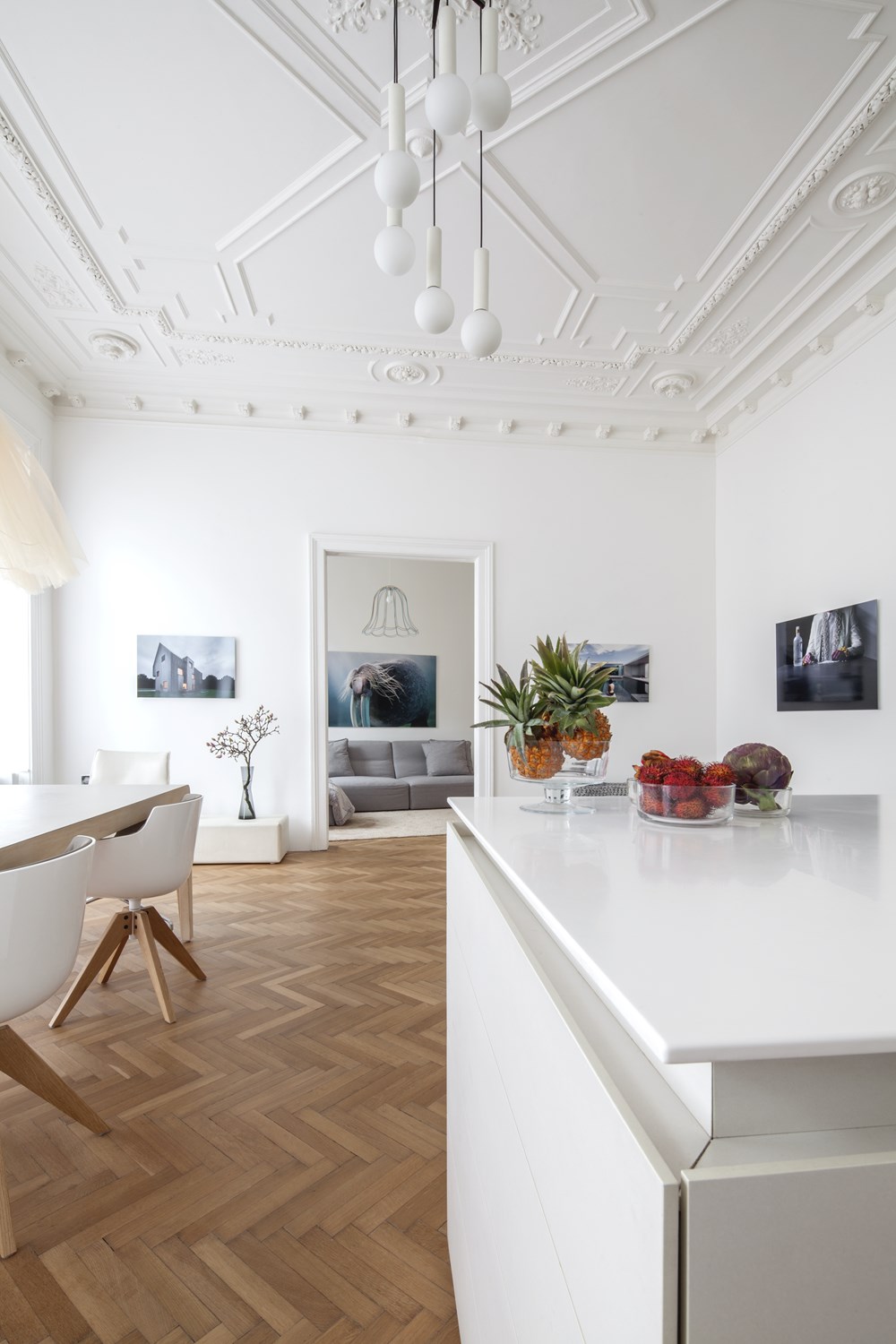 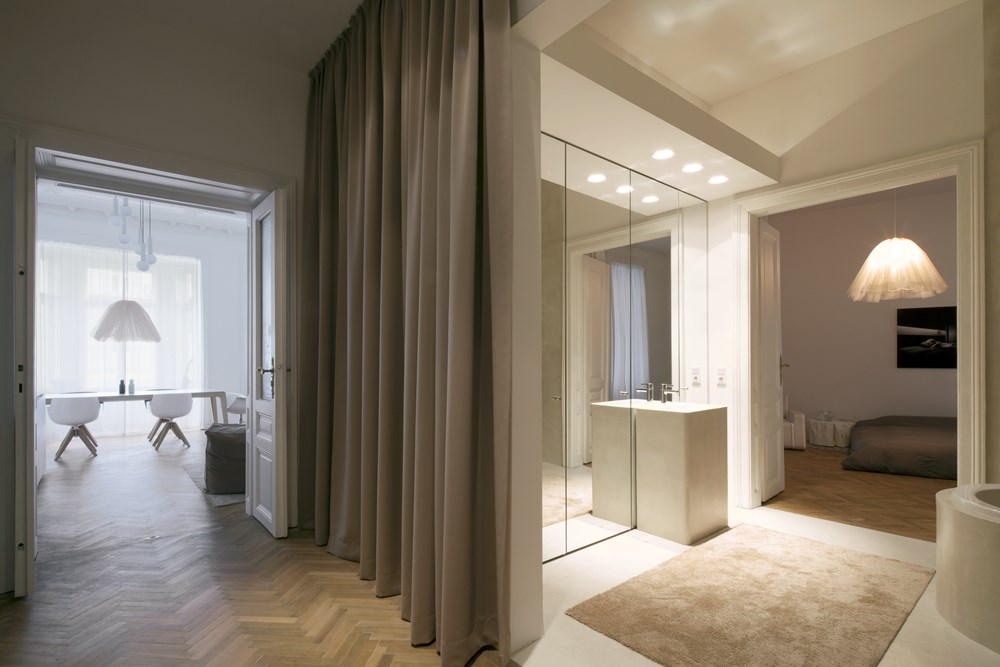 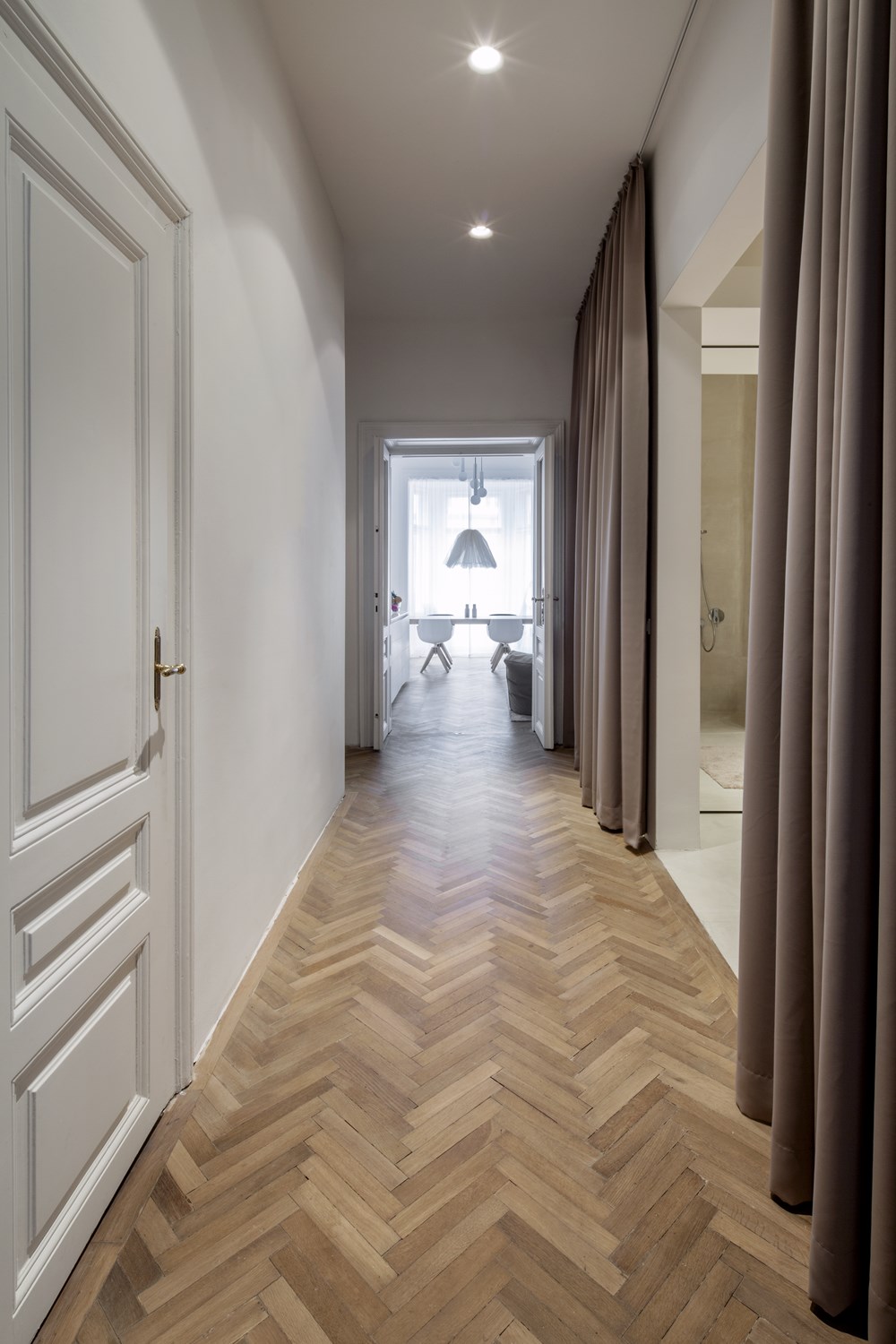 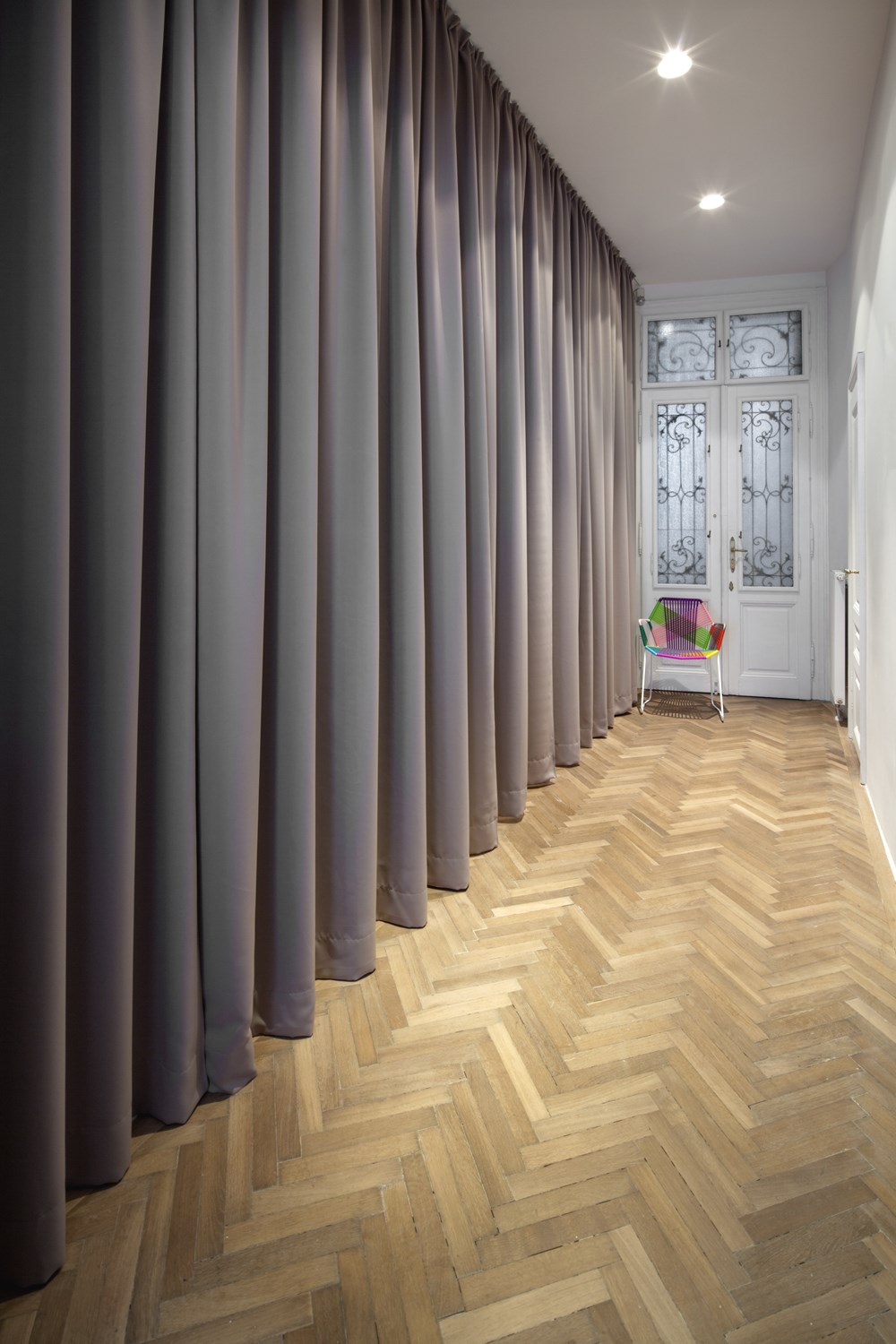 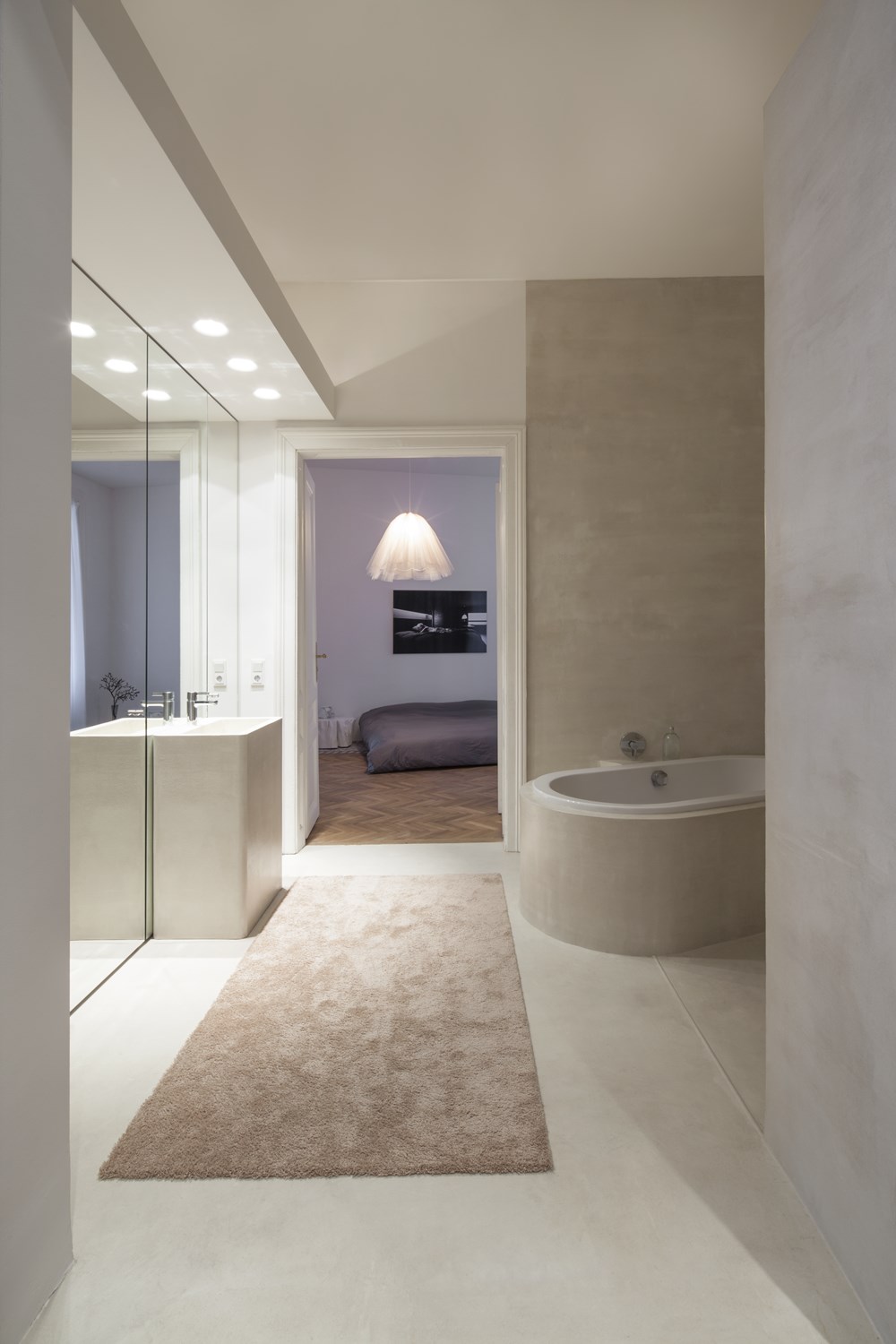 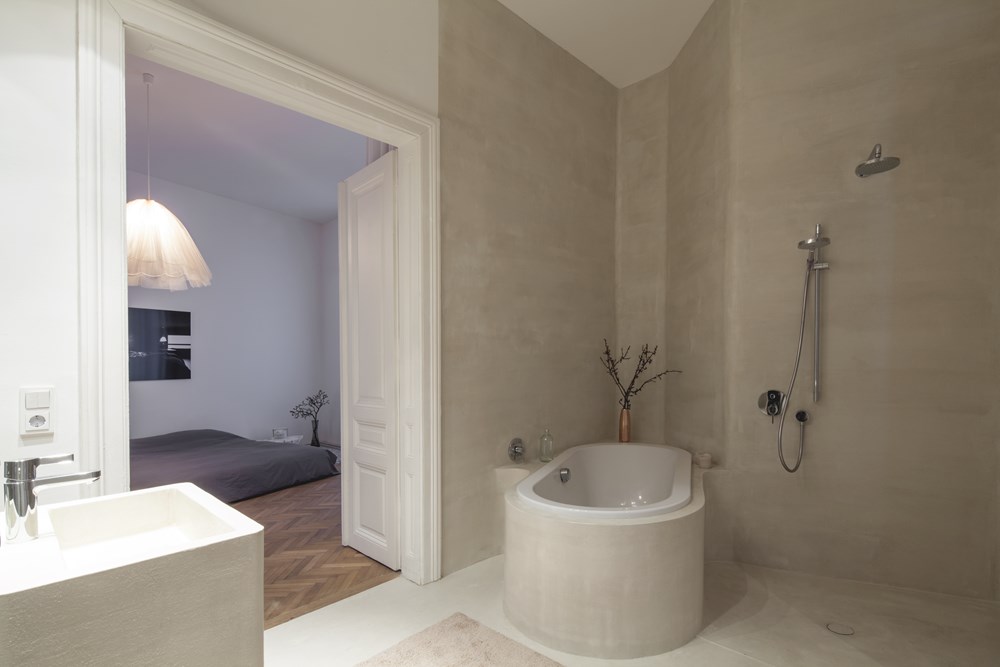 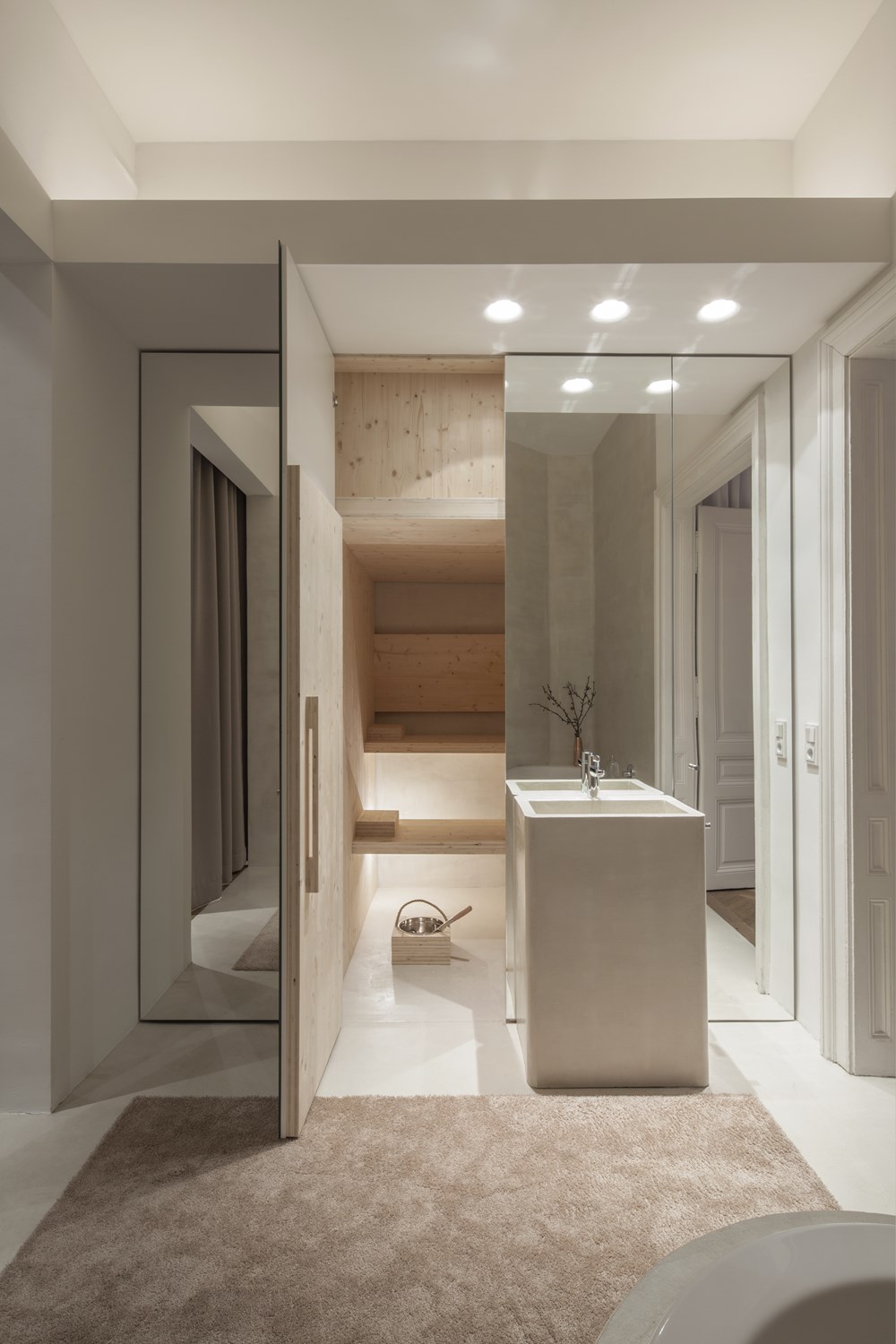 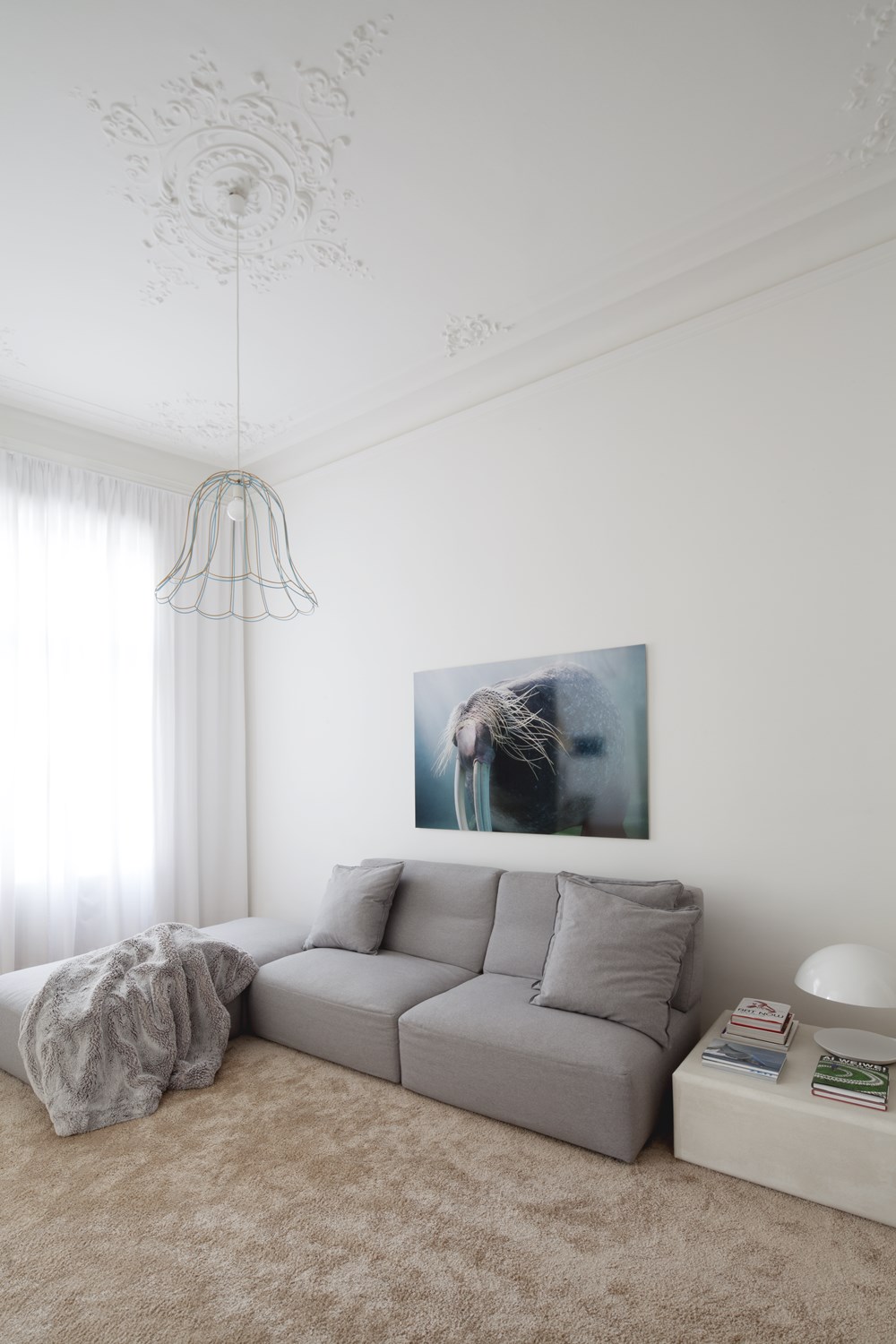 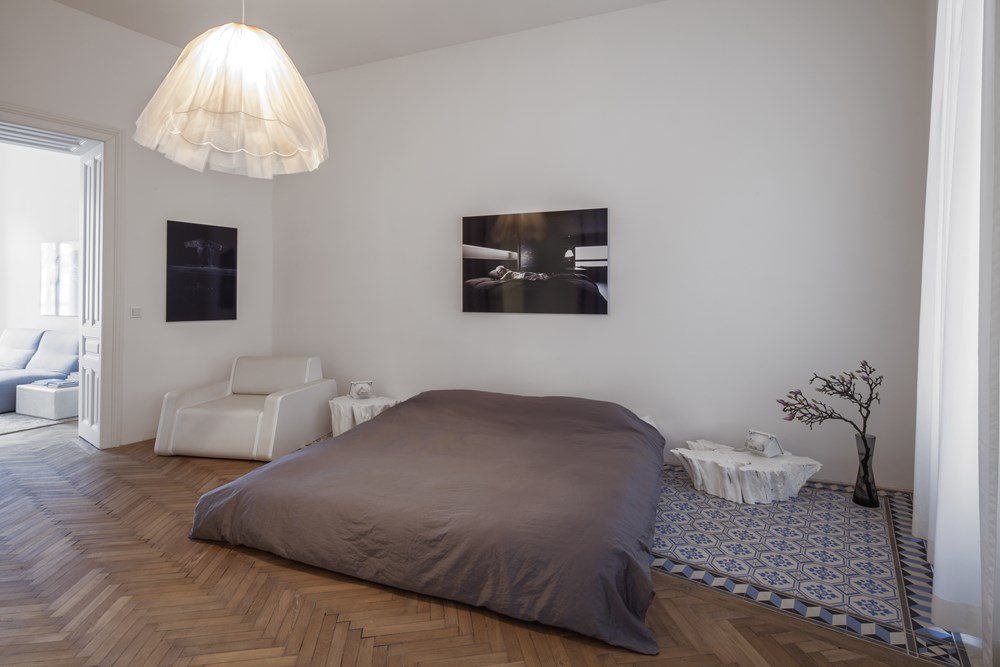 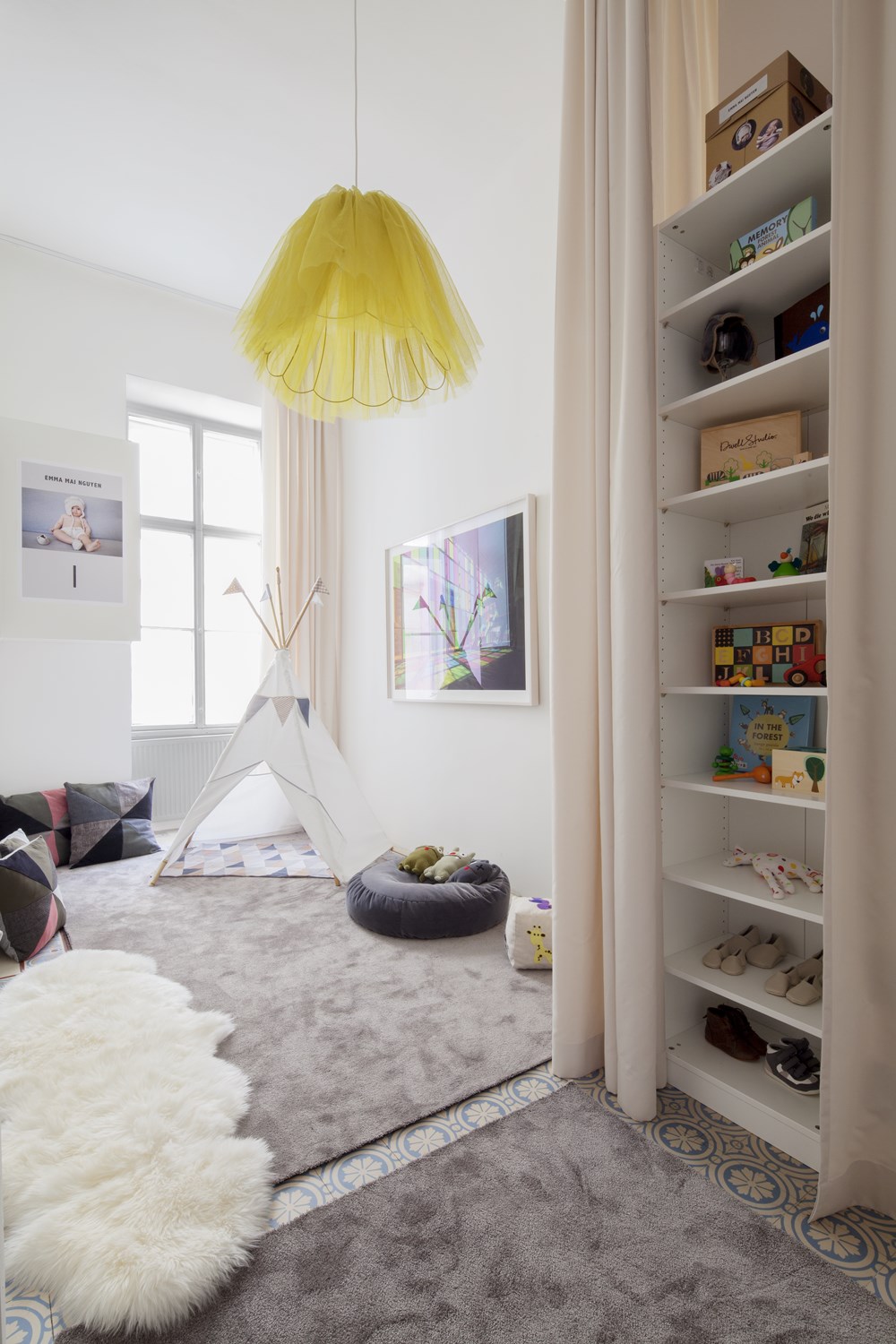 “For this project our client was looking for an apartment with preservable original substance that was not altered by typical mistakes of previous renovation attempts.
The typical structure of an apartment in an old building was adapted to meet the requirements of a modern style of living. The kitchen was integrated into the living area to make room for an additional children’s room that faces the courtyard. Even the former little bathroom was integrated into the newly created children’s room and became an alcove for the bed.
The former entrance area, which included a bathroom and a cloakroom, was transformed into a lavish wellness-bathroom with a sauna. The wall separating this bathroom from the new foyer was removed and replaced by a curtain, which can be closed if needed. The bathroom’s walls as well as its floor and washbasin were smoothed and sealed with a white tile-adhesives, creating a homogenous, monolithic and virtually joint-free spatial structure.
The parents’ bedroom was also expanded and upgraded substantially by integrating a small adjacent room where floor-to-ceiling curtains now conceal the bedroom’s wide, built-in closets.
The restoration and uncovering of the apartment’s original cement tiles in the children’s room and in parts of the bedroom accentuates these areas in a colourful way, contrasting the concept’s otherwise primarily simple and bright colours.
The furniture consists of the client’s own designs as well as pieces of furniture from destilat’s portfolio. For example, destilat’s “4tothefloor” solid wood table became the new dining table. destilat’s prototype of the “Camouflage” fibre-cement kitchen was installed in the living room’s kitchen area.
The living room and the bedroom were equipped with “Shades of 3D” prototype lamps. The tulle-chandeliers above the dining table and in the children’s room were designed by the client’s wife.”
Photocredits: monikanguyen