Crec Eixample is the second coworking space designed by CaSA for CREC, leading company in coworking in Barcelona. After the first collaboration with their “social coworking” Sinèrgics, CREC called again CaSA to design the new, centrally located workplace. Photography by Roberto Ruiz. 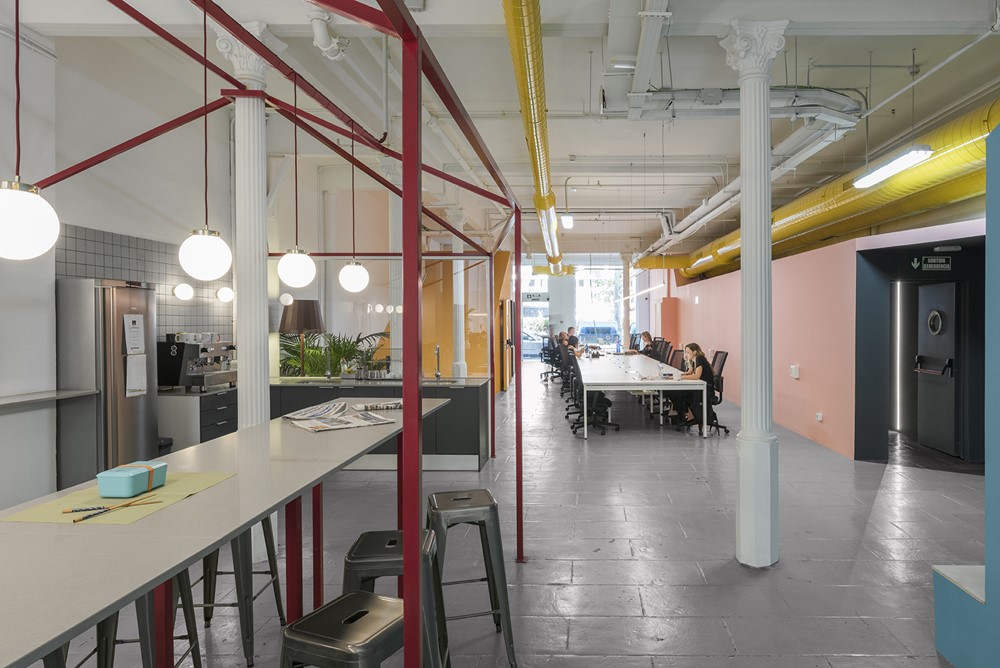 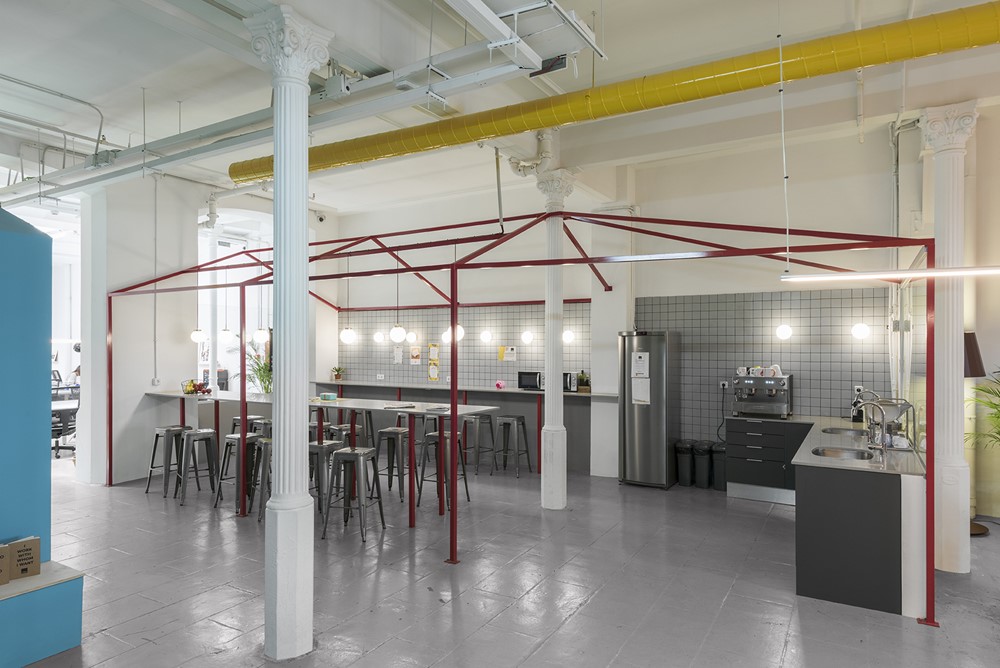 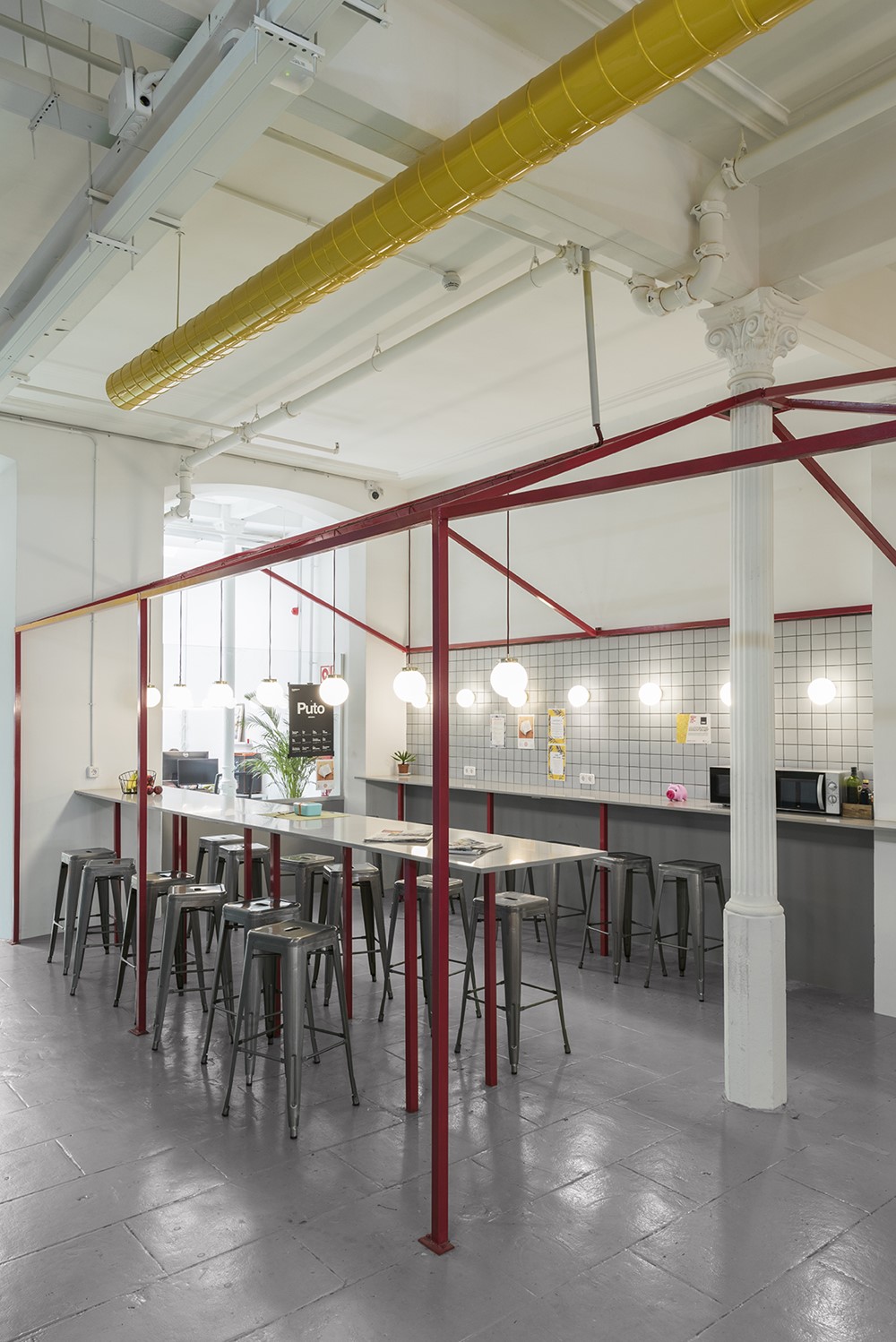 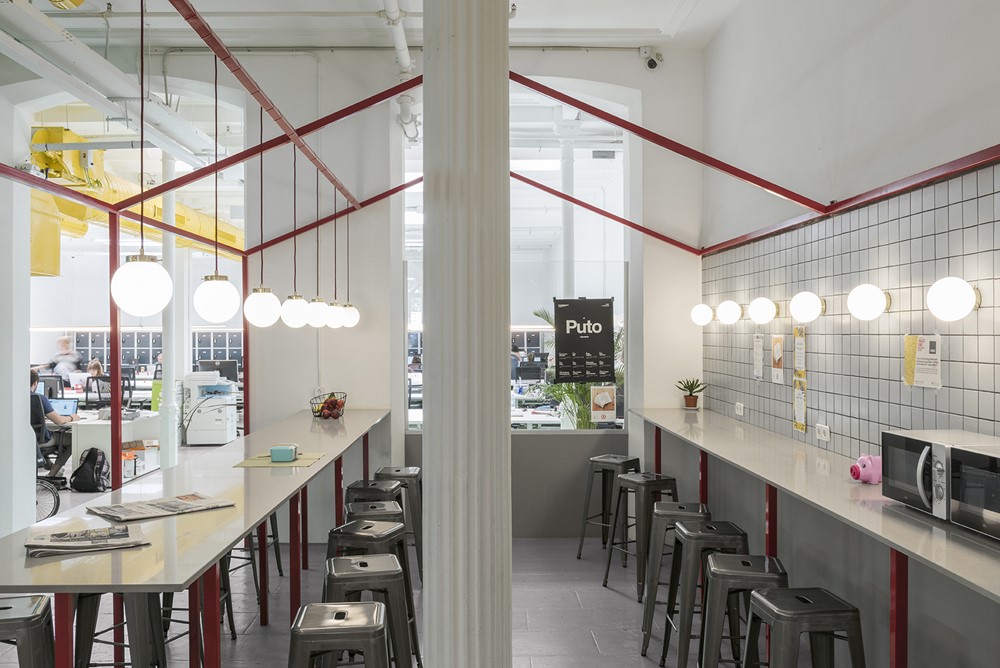 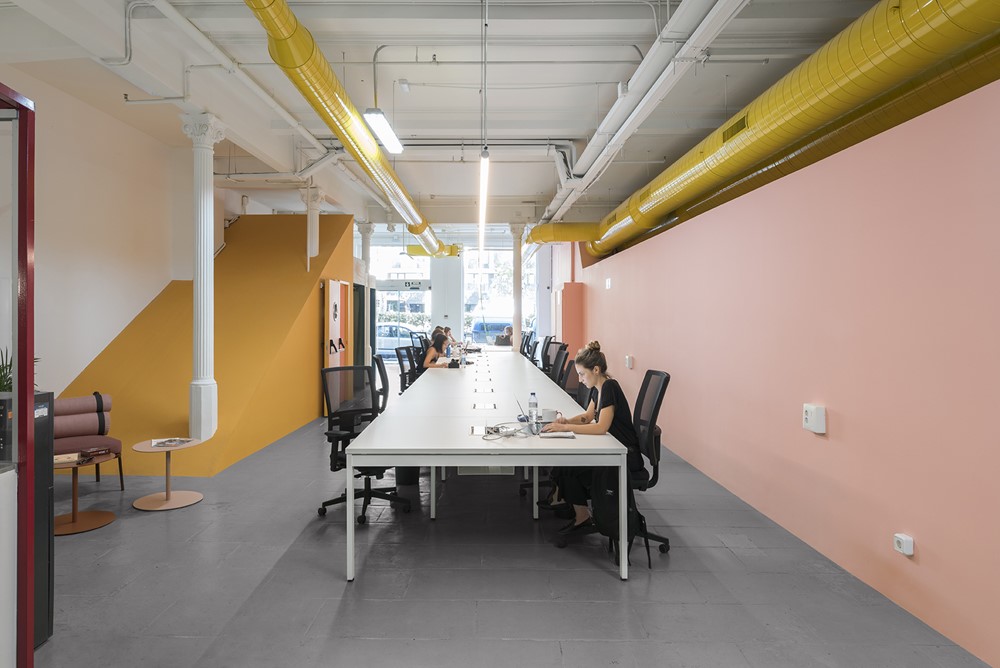 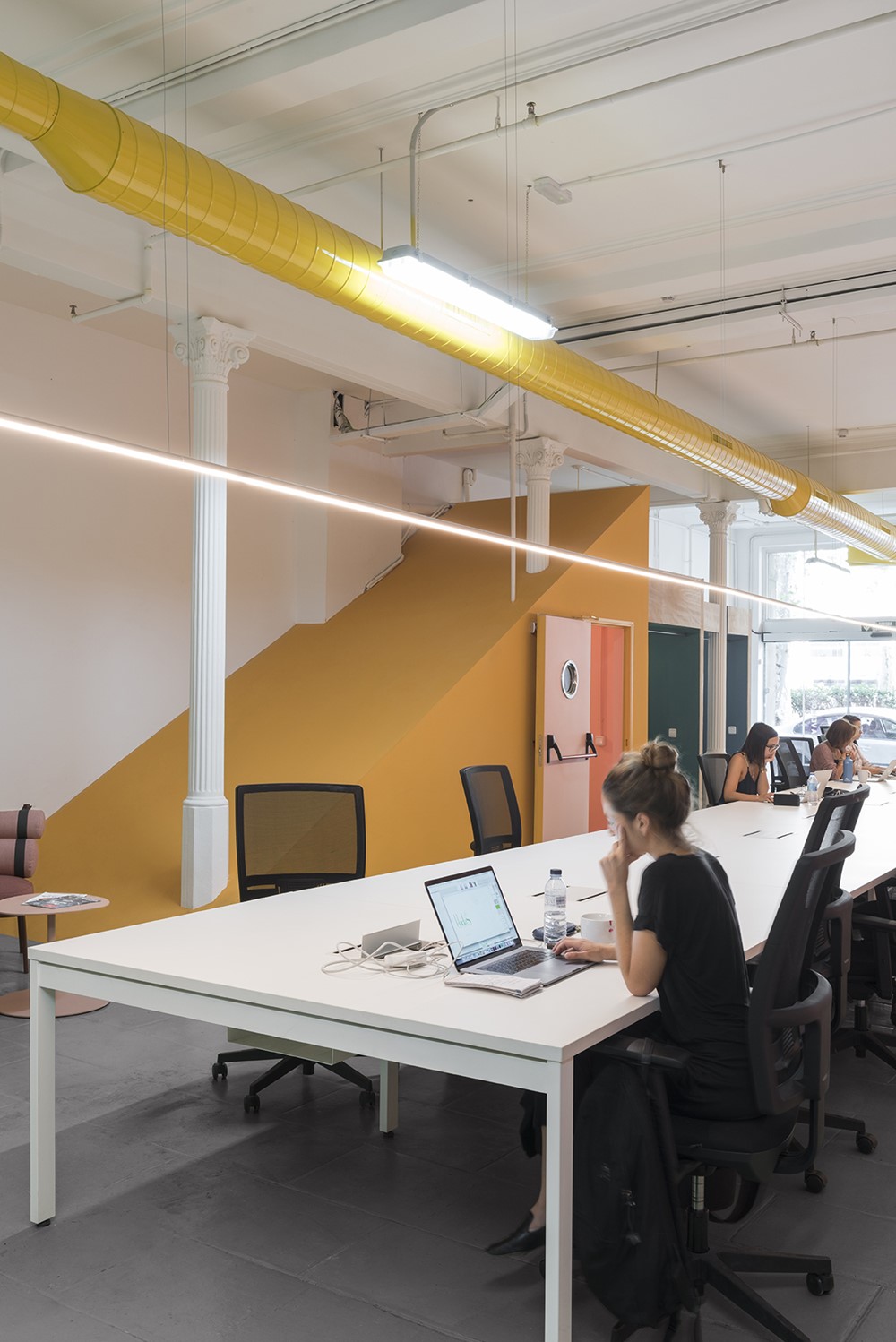 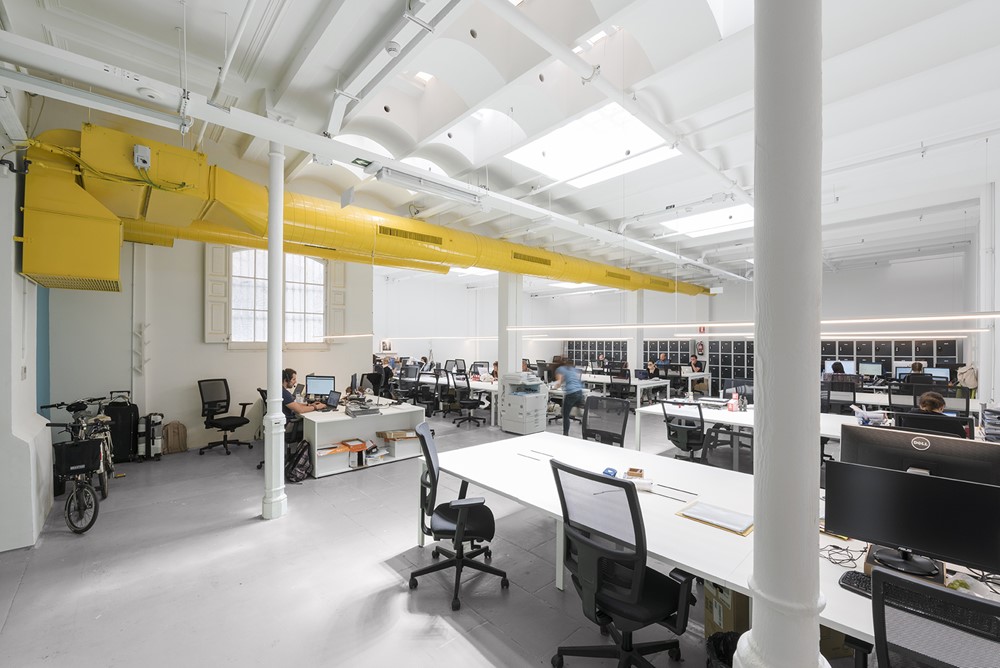 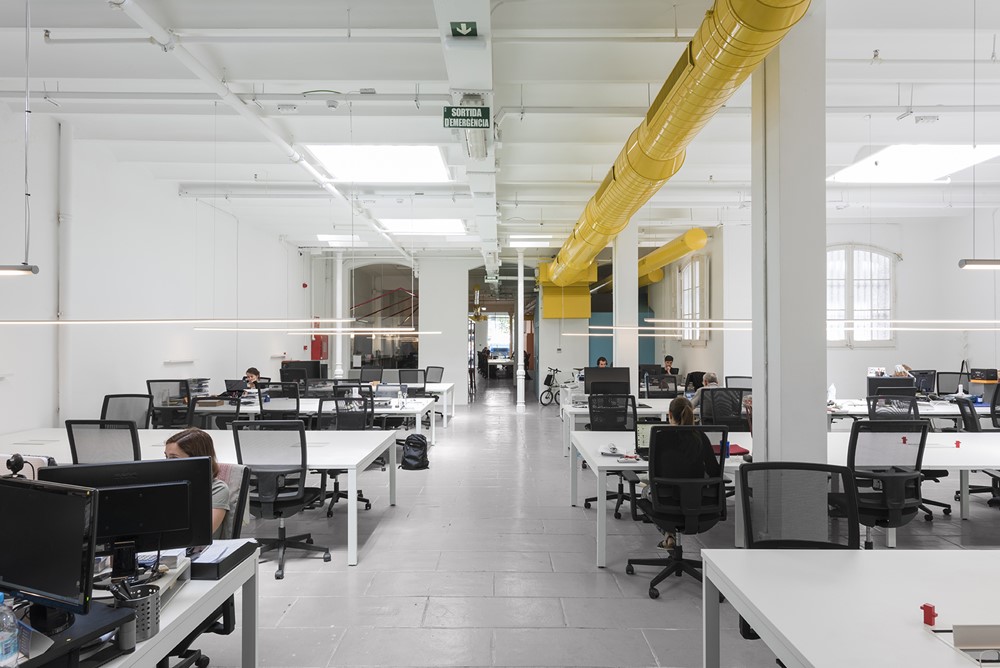 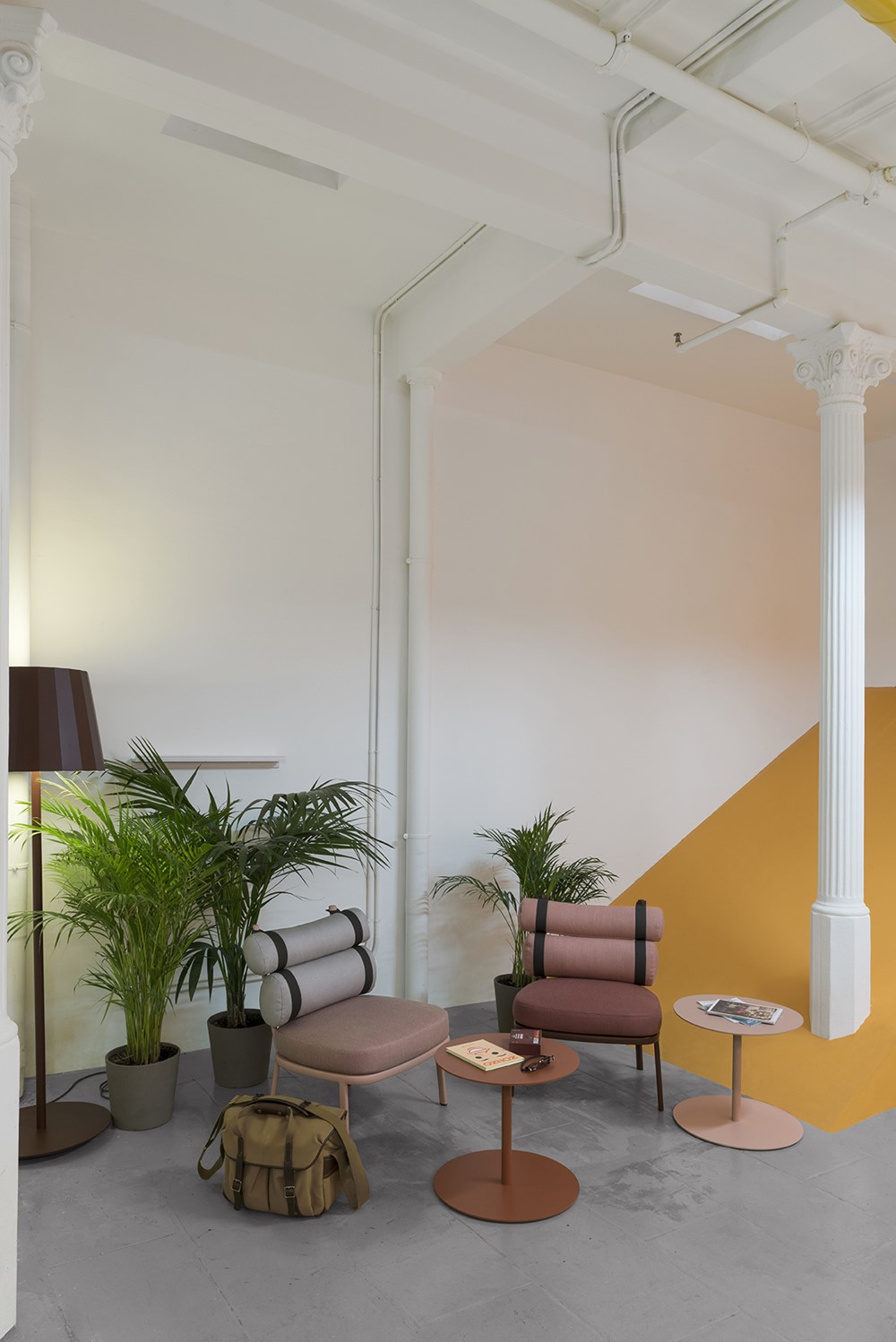 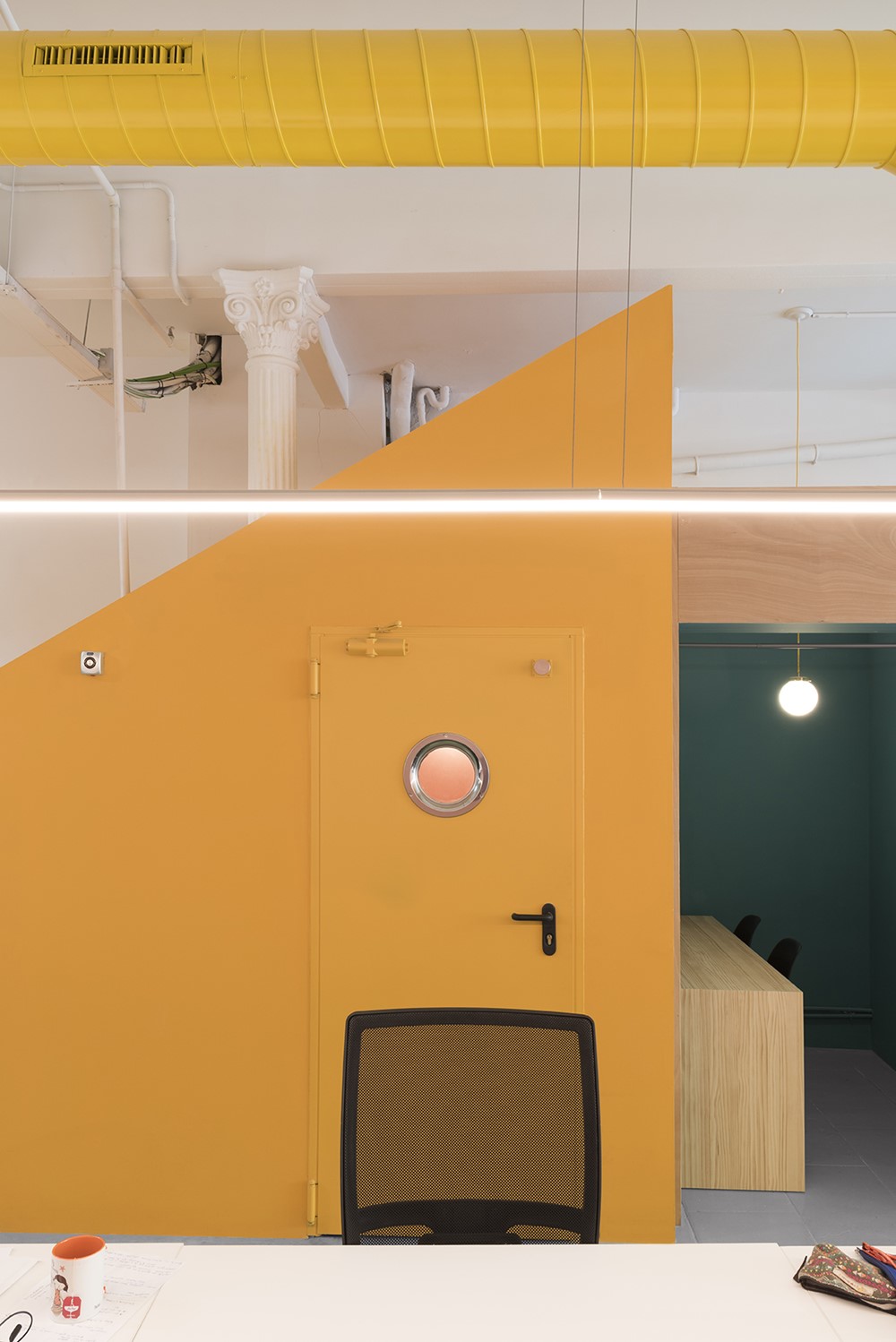 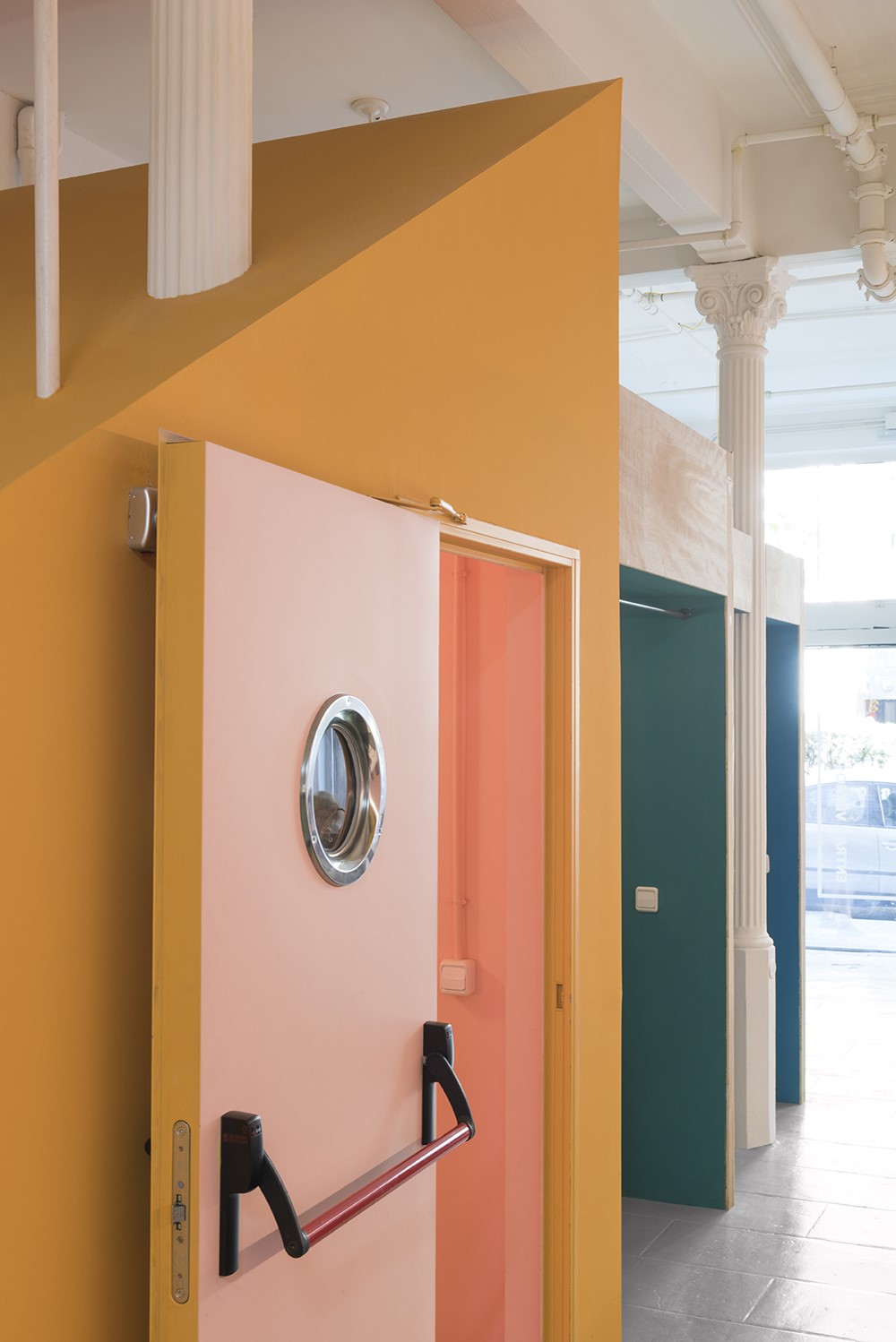 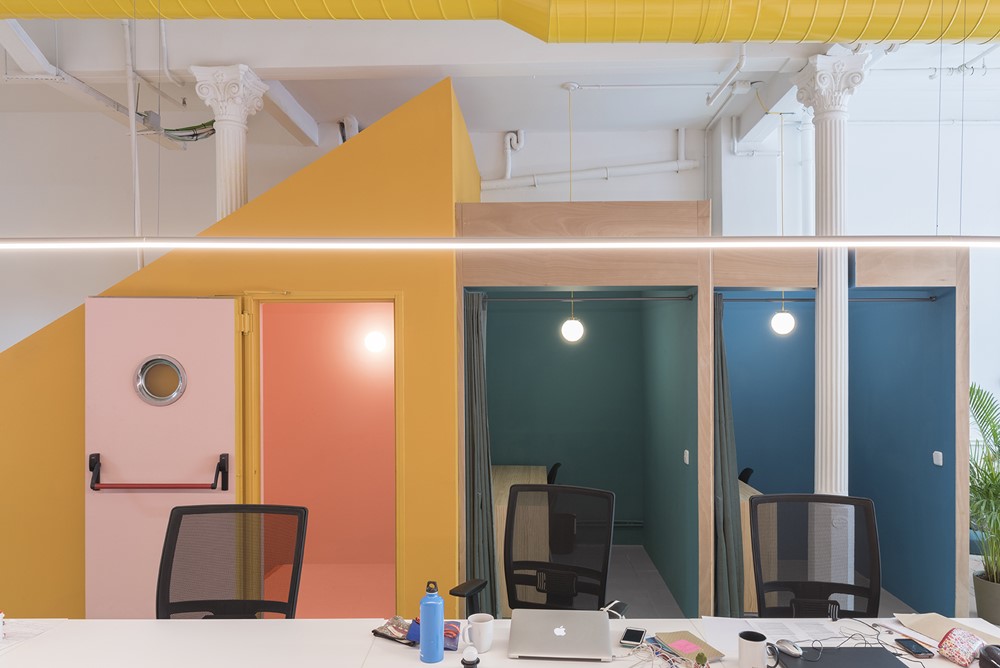 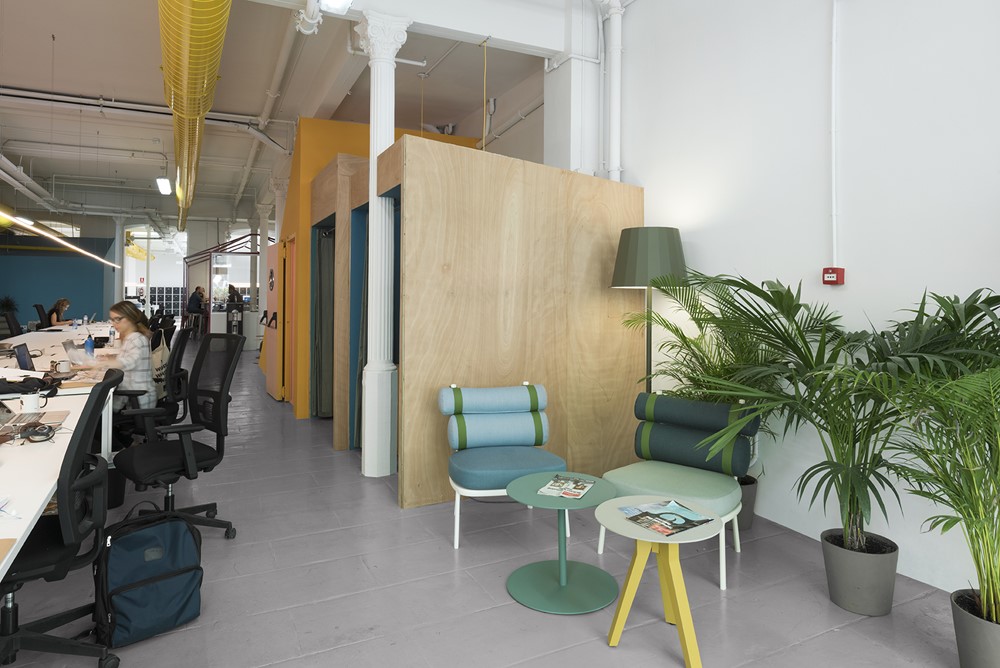 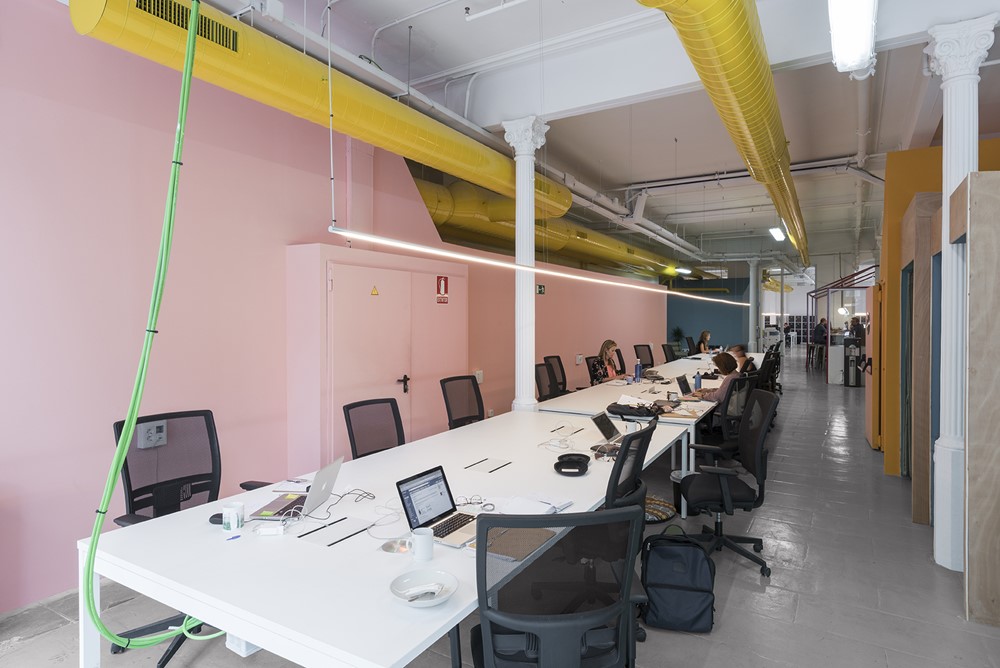 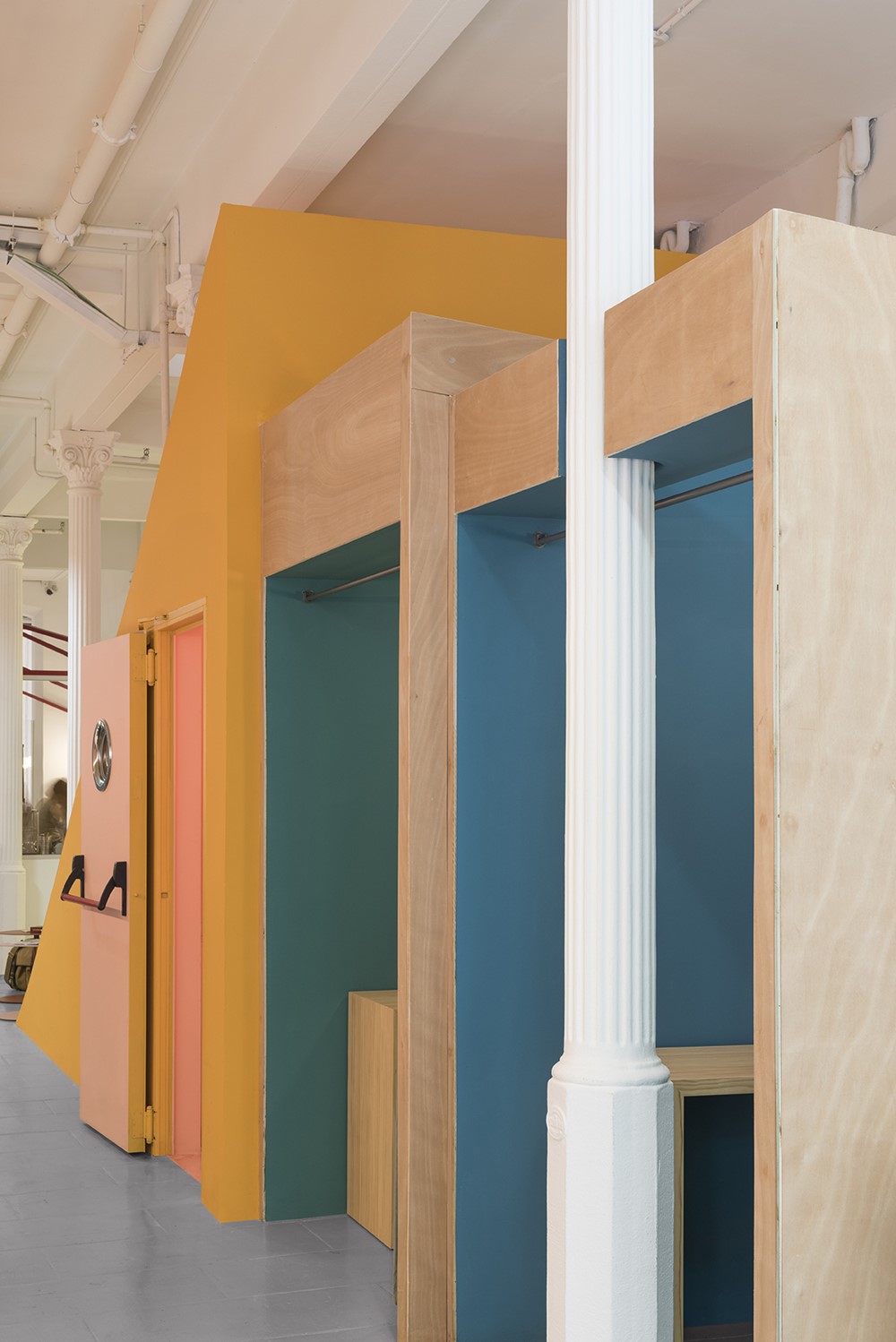 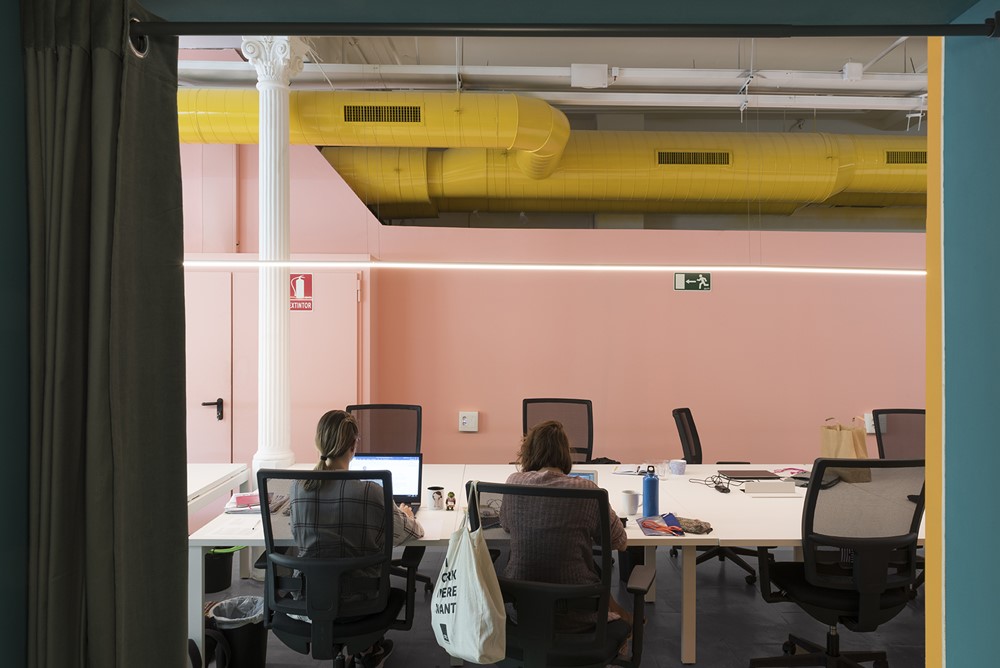 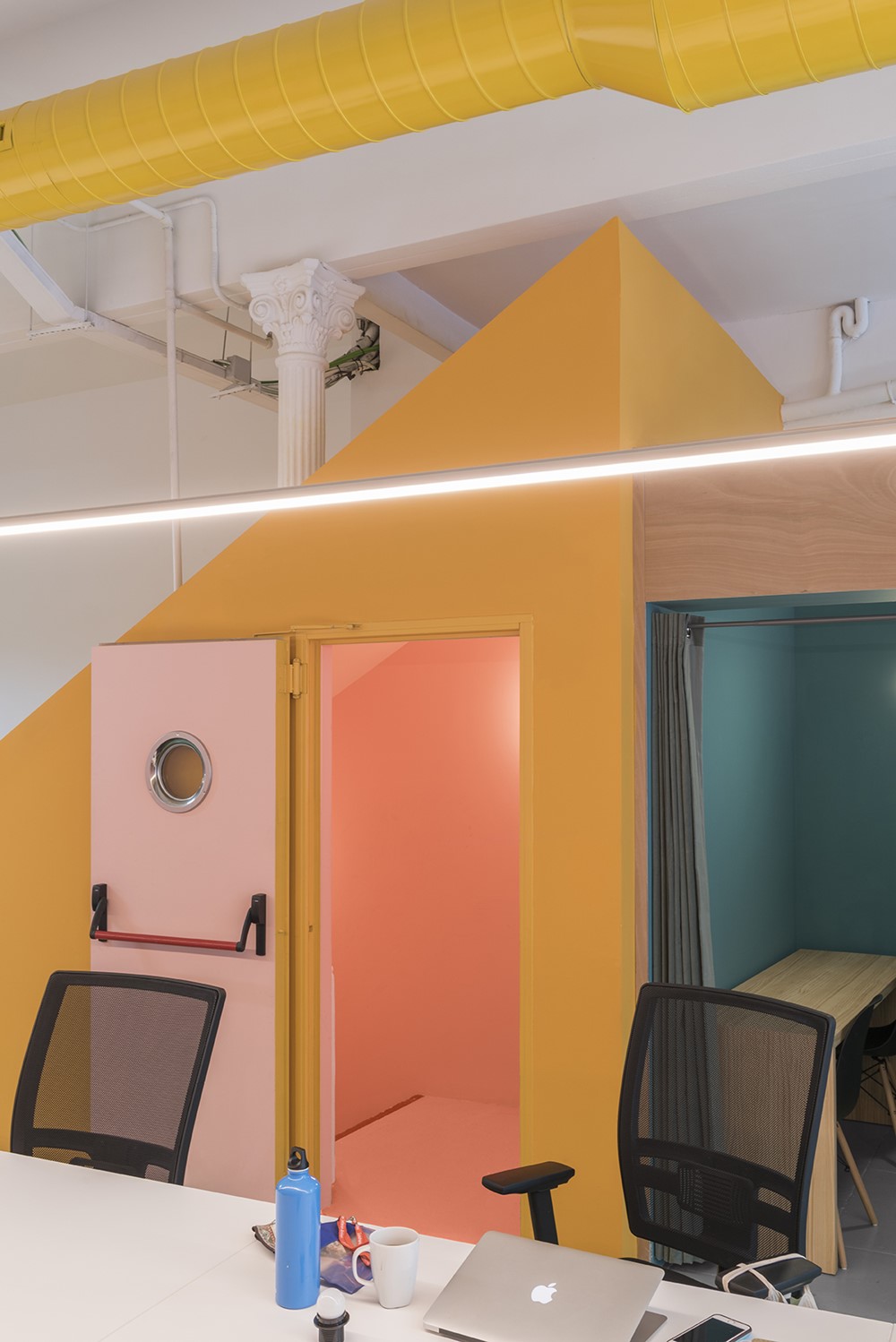 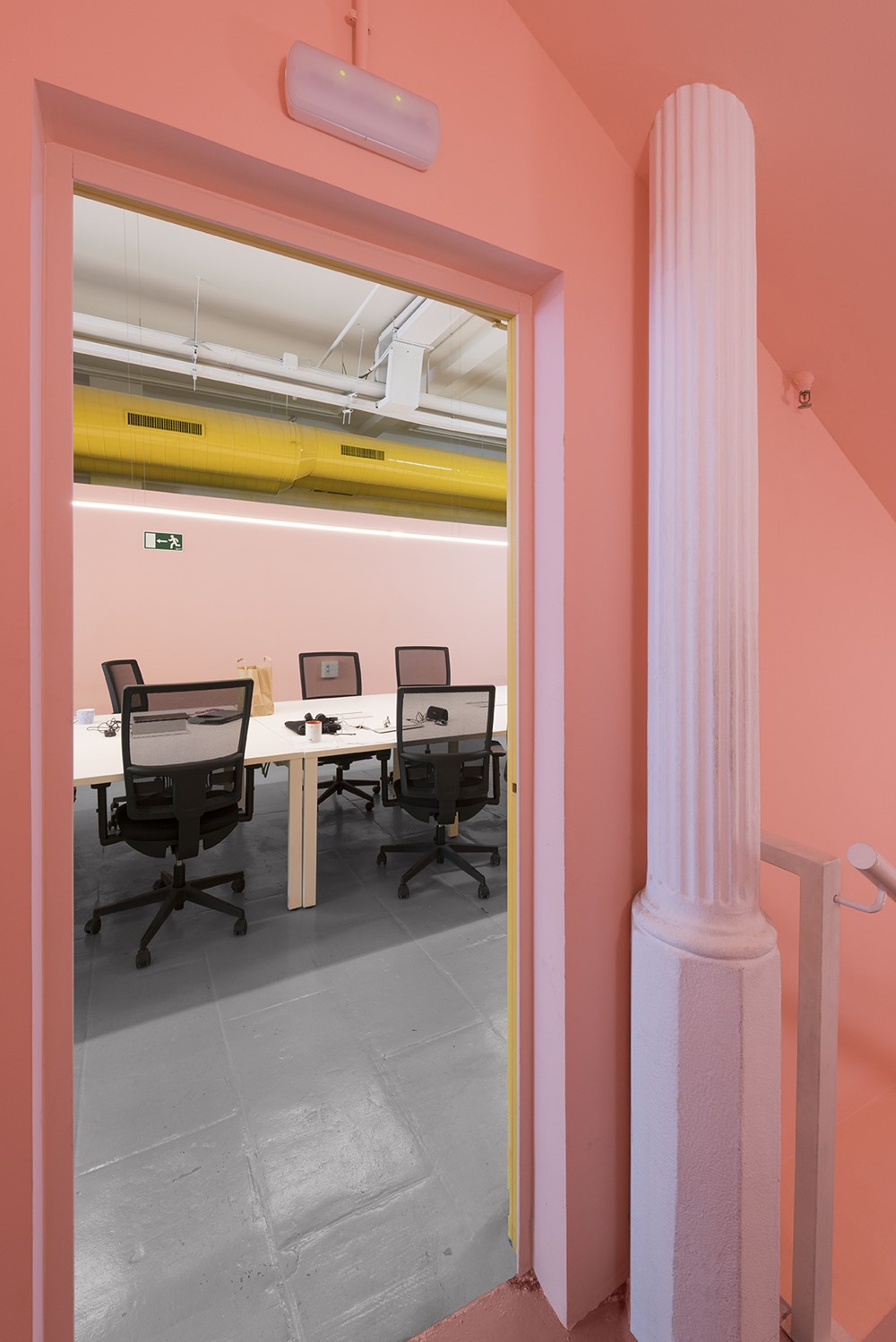 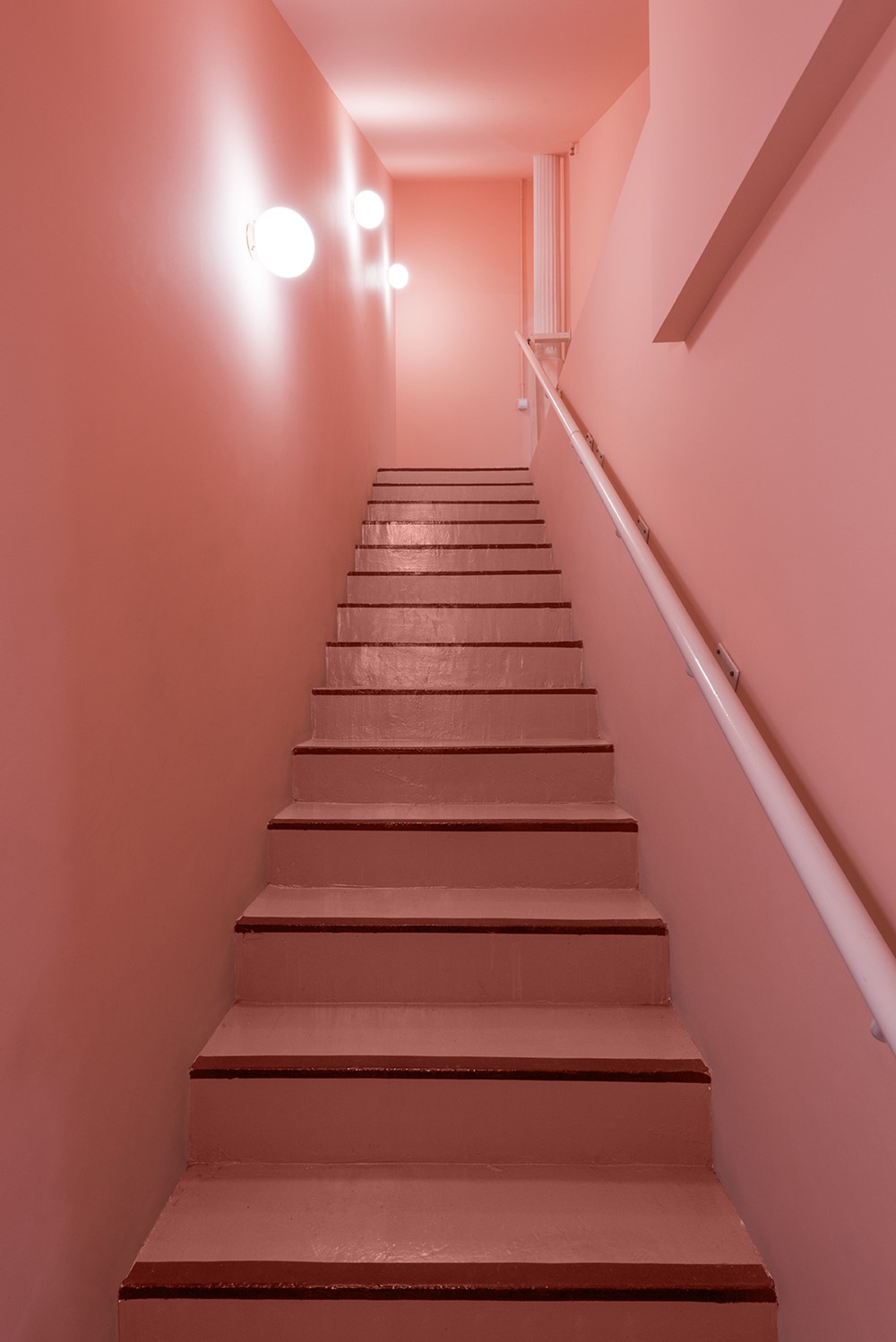 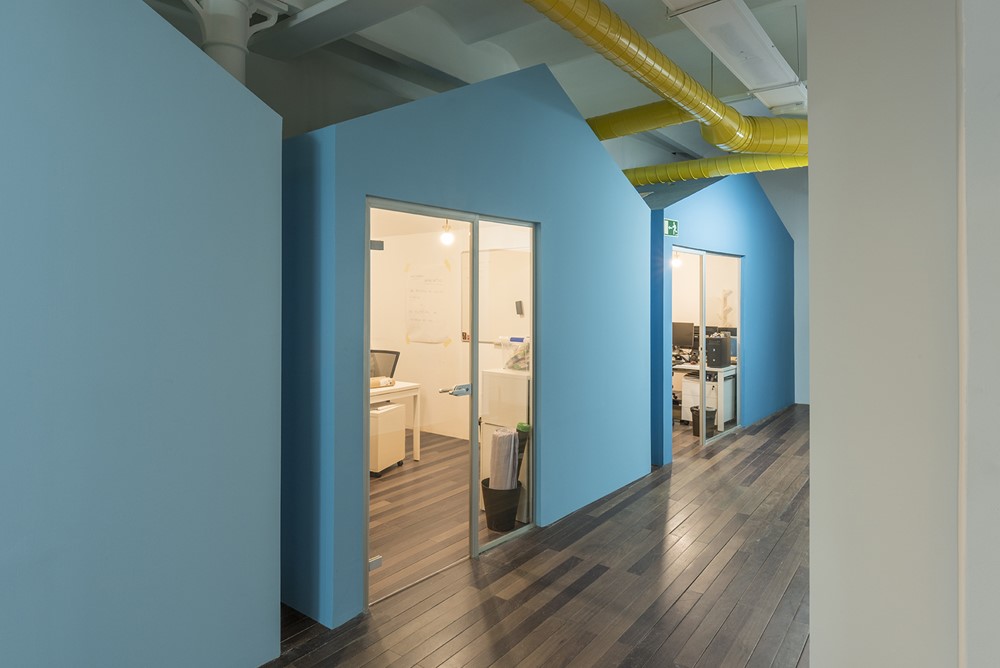 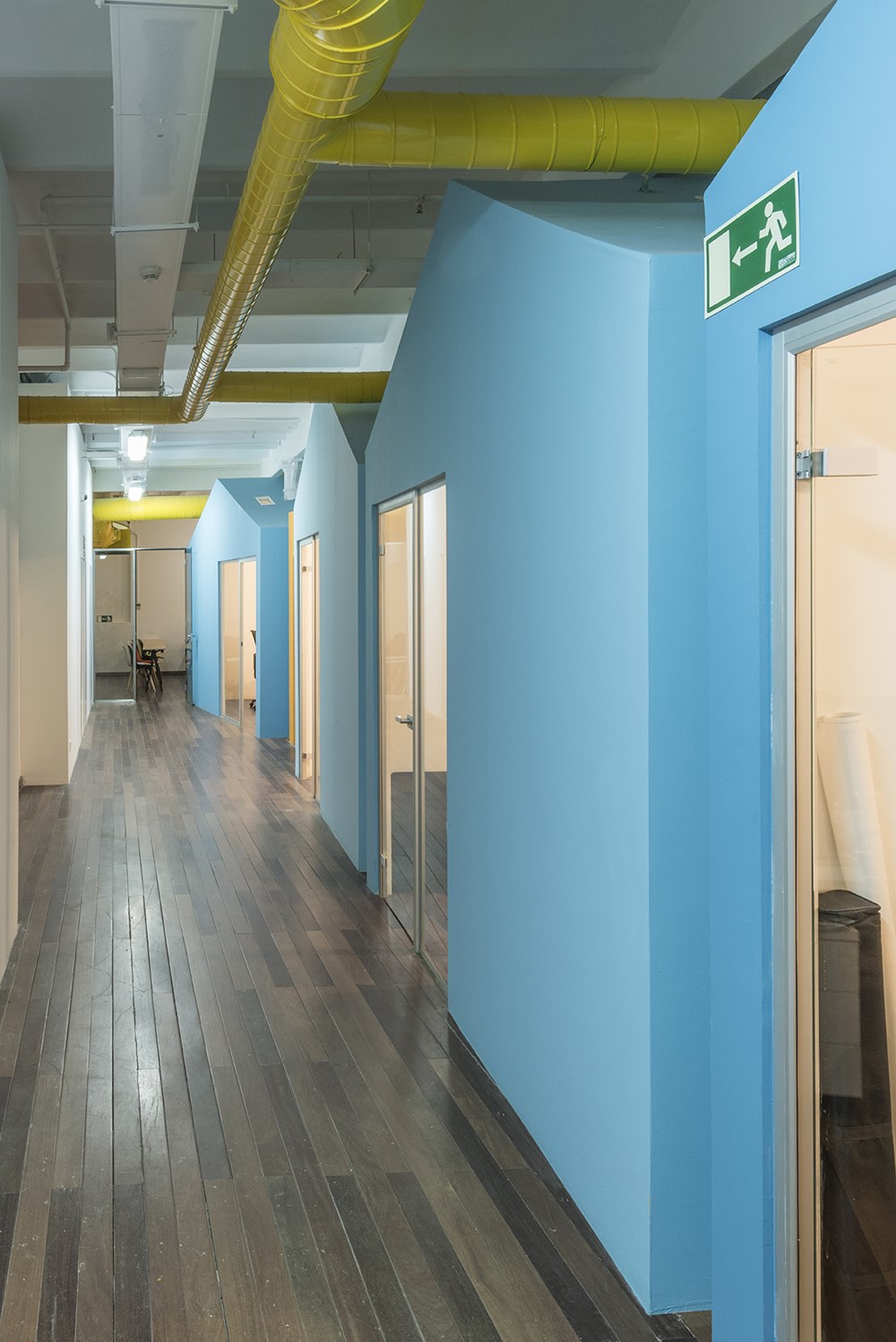 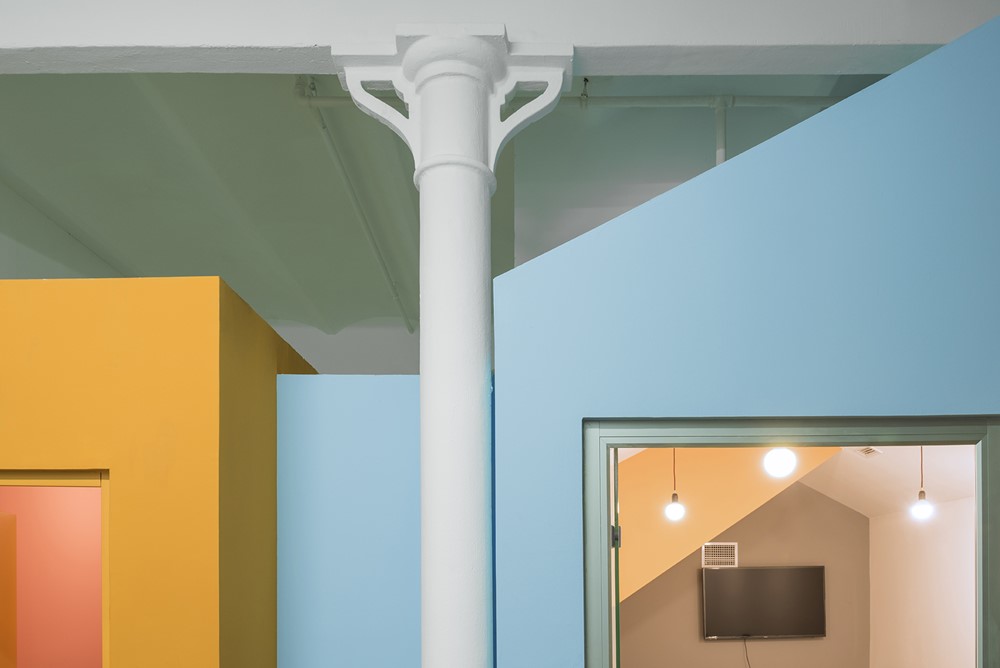 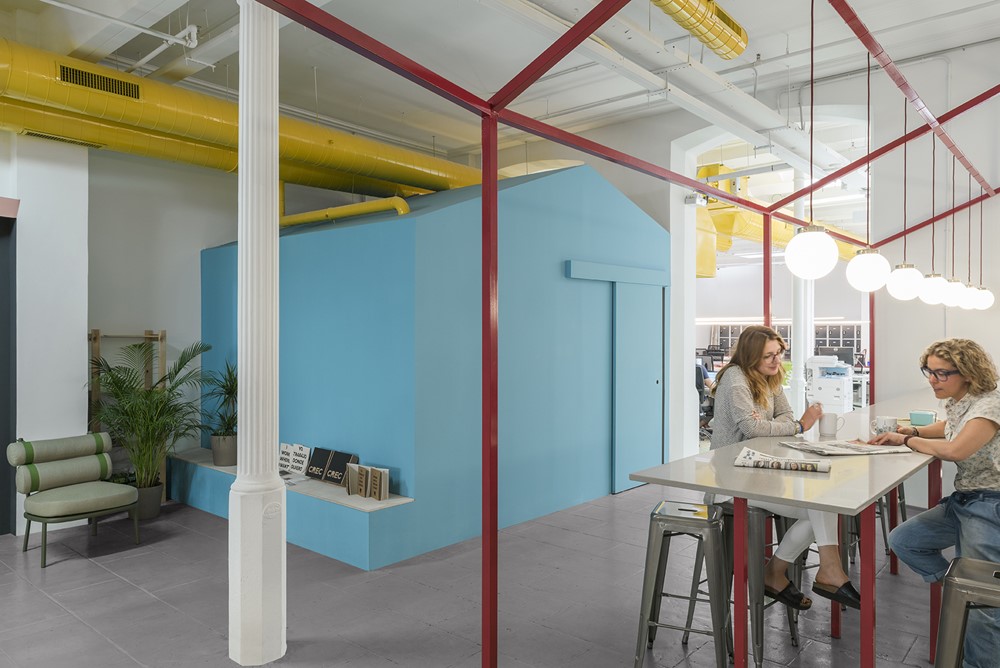 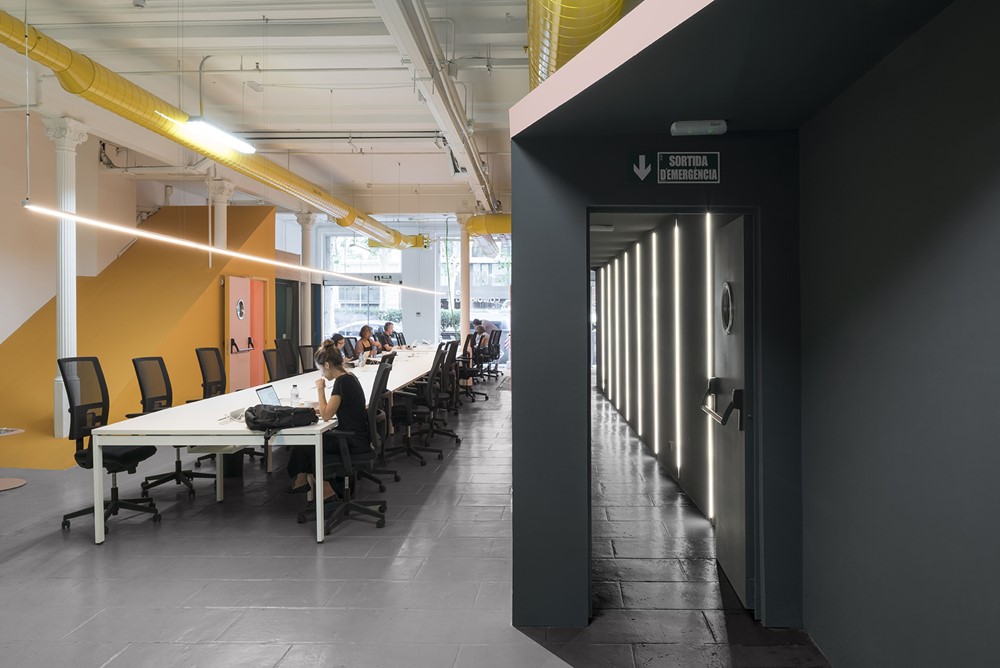 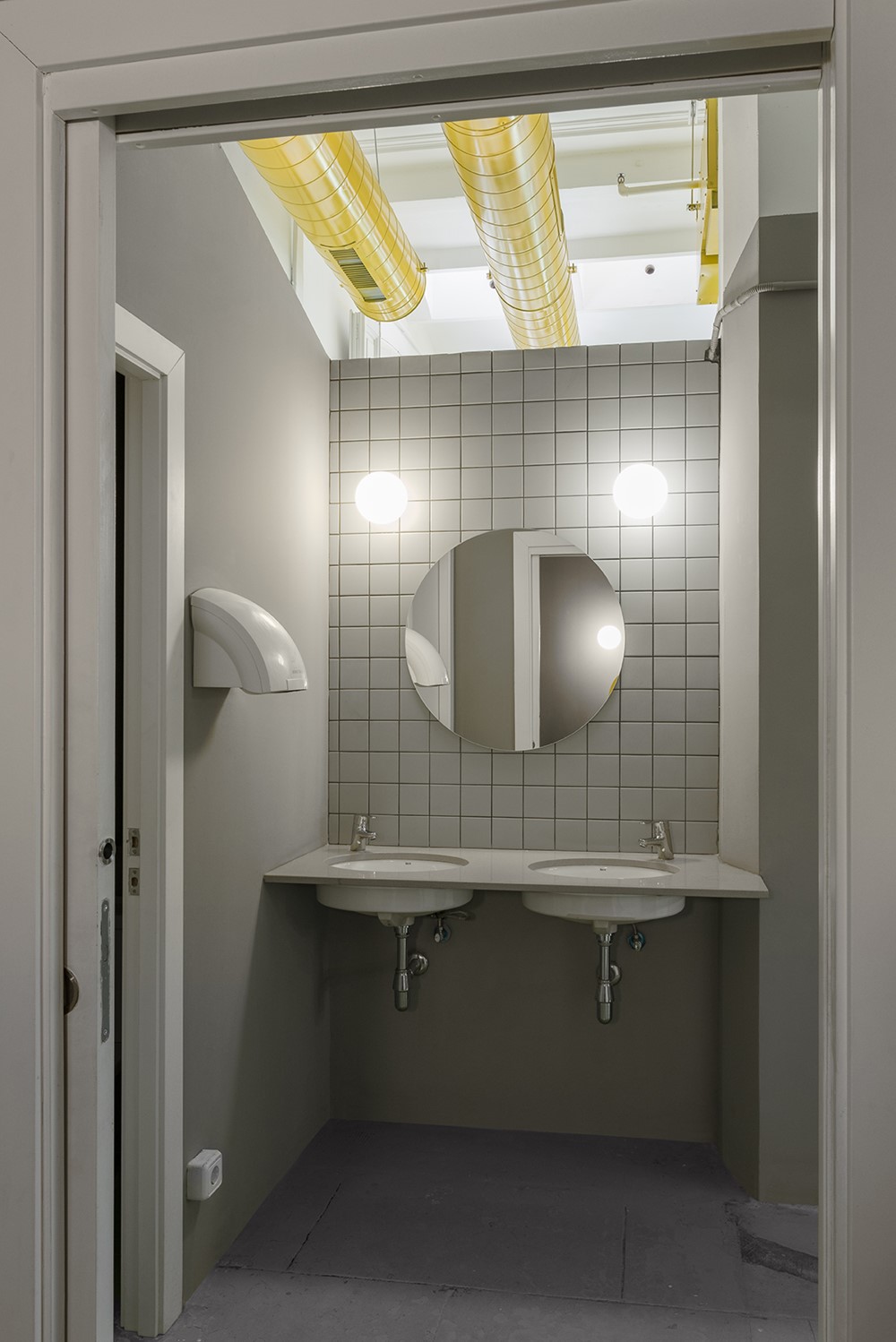 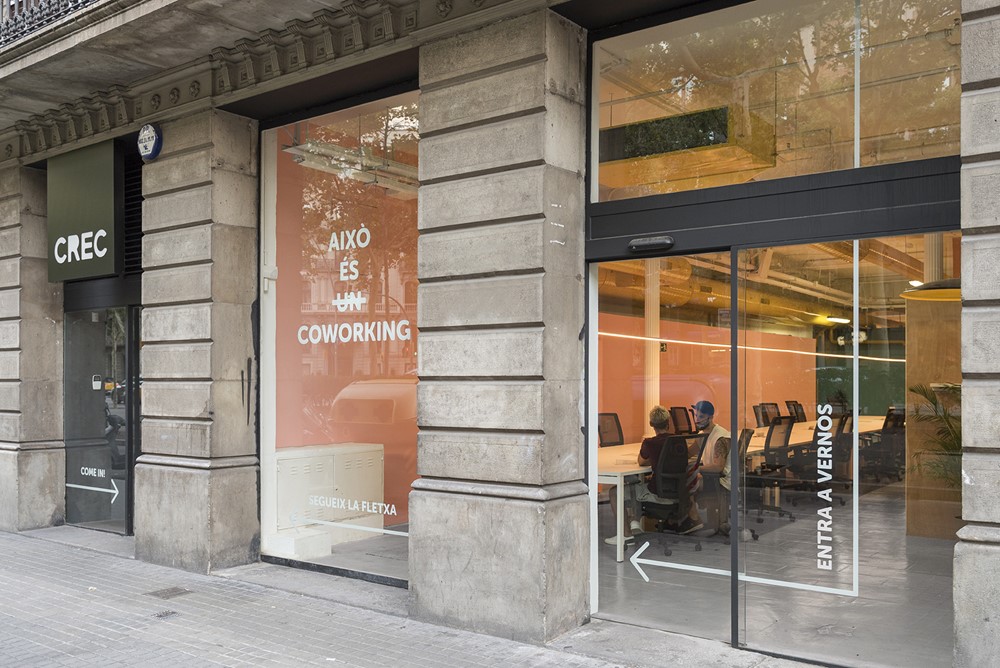 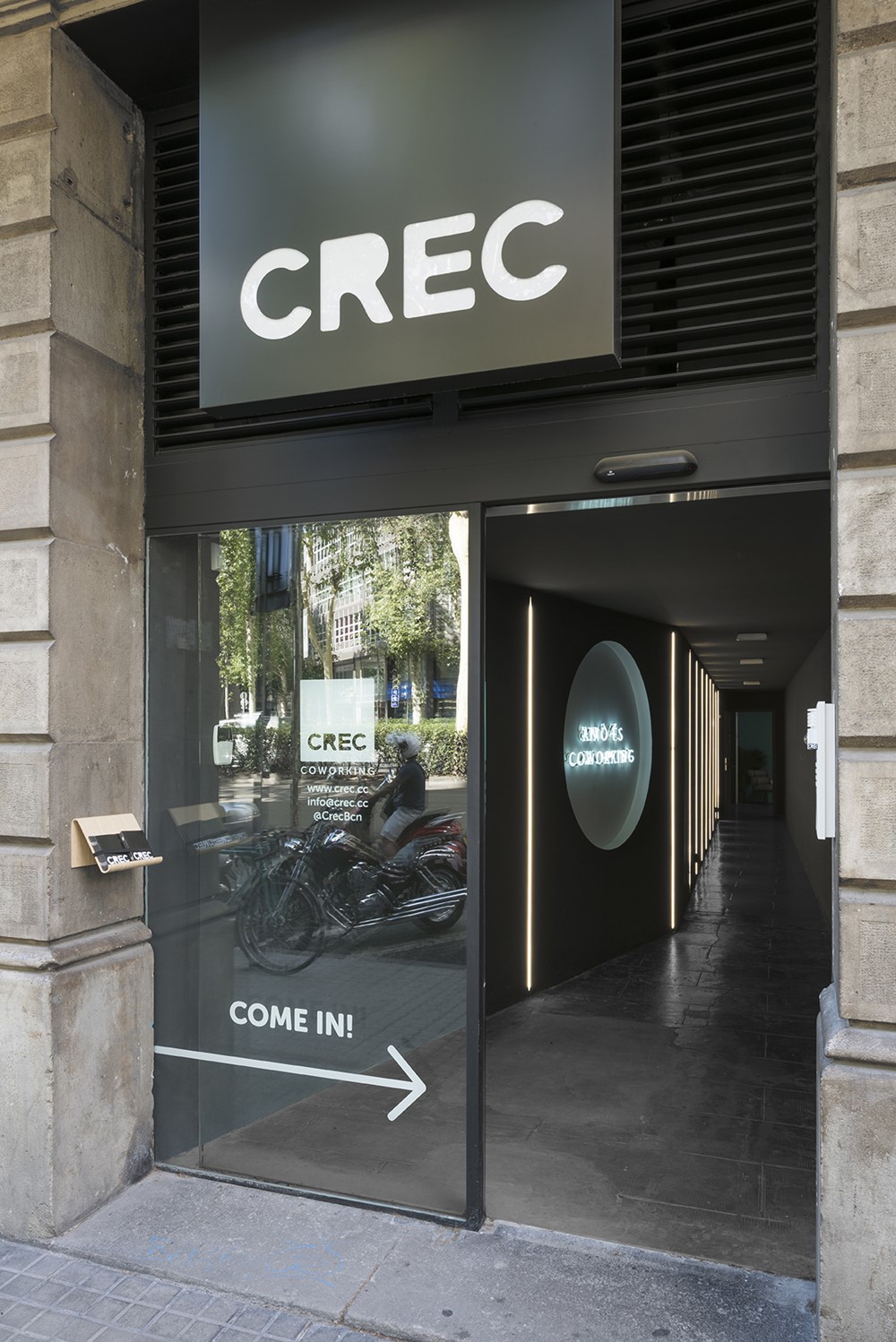 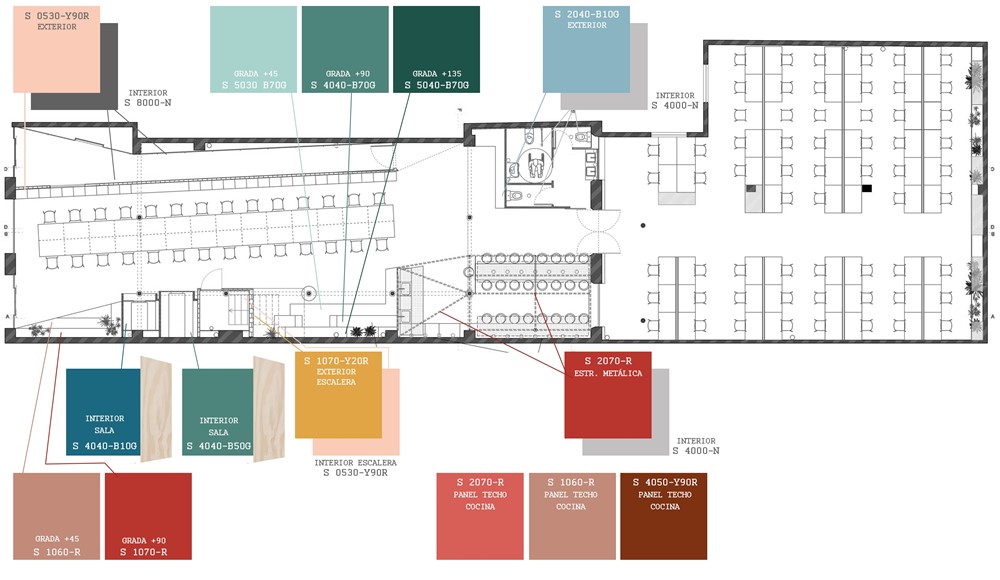 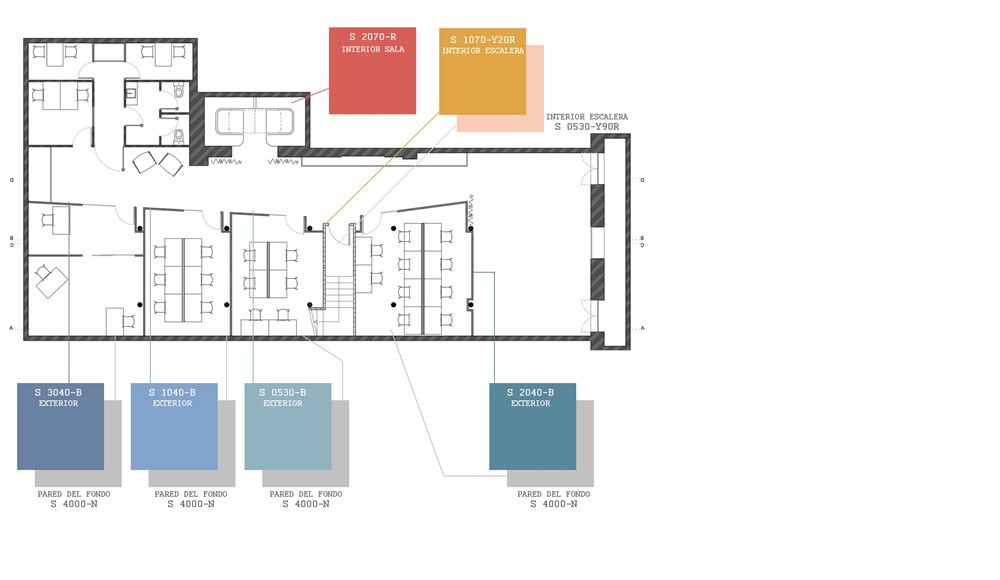 Located a few steps away from central Plaza Catalunya, its 700sq meters of surface divided between street level and basement, provide as by brief of the client a wide variety of working environments for different needs for over 110 people: communal tables for flexible workers with laptops separated from fixed desks for people not willing to move around; closed offices for private offices for companies, communal areas such as Kitchen/office, relax areas, meeting rooms, conference boots, toilets and a lecture room.
The large premises previously hosted an office canteen, have been cleared of all dividing elements.
The empty space revealed valuable features, such as two sets of slender cast iron columns with composite style capitals and three big openings toward the street formerly walled or obscured with adhesive elements have been regained. After the space was freed from partitions the concept became suddenly clear: to create an open, fresh, uncluttered work environment, highlighting the existing elements, a neutral light grey surface as base (epoxy paint flooring) on which architectural volumes are placed: geometrical shaped colour blocks based on a carefully studied palette, that will embody the space utilities and functions.
The access from the broad and tree-filled Gran Via avenue was a challenge: by regulations a fireproof corridor exit had to be provided. Had the exit being different from the entrance, to duplicate the halls would take away workspace. Architects opted to treat this limitation as an architectural theme, by using the same fire escape corridor as the entrance: a charcoal-coloured tube with LED lines and the company’s motto “això és coworking” (this is coworking) welcomes the visitors behind the glazed sliding door.
Once crossed this dark corridor one lands – through a diagonally cut volume – in the colourful, central part of the ground floor area that hosts the services.
The kitchen/canteen is outlined in dark red metallic lines, a red tubes structure that wraps around one of the ancient columns. Two lines of globe lamps light the area from, both hanging from the ridge of the structure and placed as appliques on the tiled wall.
Colour also dominates the interior of the boxes, by using paint in contrast or through ceramic materials, as on the kitchen walls or in the toilets, hosted by a blue house-shaped volume, and both lined with simple grey 10×10 tiles by Vogue (Interni collection).
The fix area is placed passed the three existing arches, on the inner side of the floor plan. Two rows of tables flooded by the light of skylights above, the simple and neutral space is meant for fixed workers and bigger groups.
On street side, the flex area is placed along the volume of the entrance hall, externally painted in a light pink colour. Its long table is lit by a suspended LED tube system, Moon by DLLUM.
Opposite to the pink volume, two boots clad in plywood and internally painted in shades of green and teal, provide room for quiet conference calls.
A relax area, featuring furniture and lamps by Kettal is placed between these volumes and the street windows. A Second relax area, also featuring Kettal Roll armchairs, Objects Table and Outdoor Lamps is placed between the kitchen and the wedge-shaped saffron volume of the staircase.
The triangular volume of the staircase appears through the floor, punctured by the white columns that go trough its slope. Once through the door the space is completely pink. This volume links the ground floor to the basement area, dedicated to closed offices.
Each office is shaped as a house and has separate entrance. Opposite the four blue house shaped offices there’s a meeting room, completely painted in red, and at the extreme of the plan, a conference room that fits up to fifty people.
On both floors the bright yellow air conditioning pipes unify the space with a strong gesture by floating above all the elements.