BEATES is a project designed by nook architects in collaboration with byn studio and is located in Barcelona, Spain. The architectural refurbishment of this commercial ground floor space was conditioned for the needs of its new use, a design studio and concept store in what had been for the past few decades an archive and educational space. 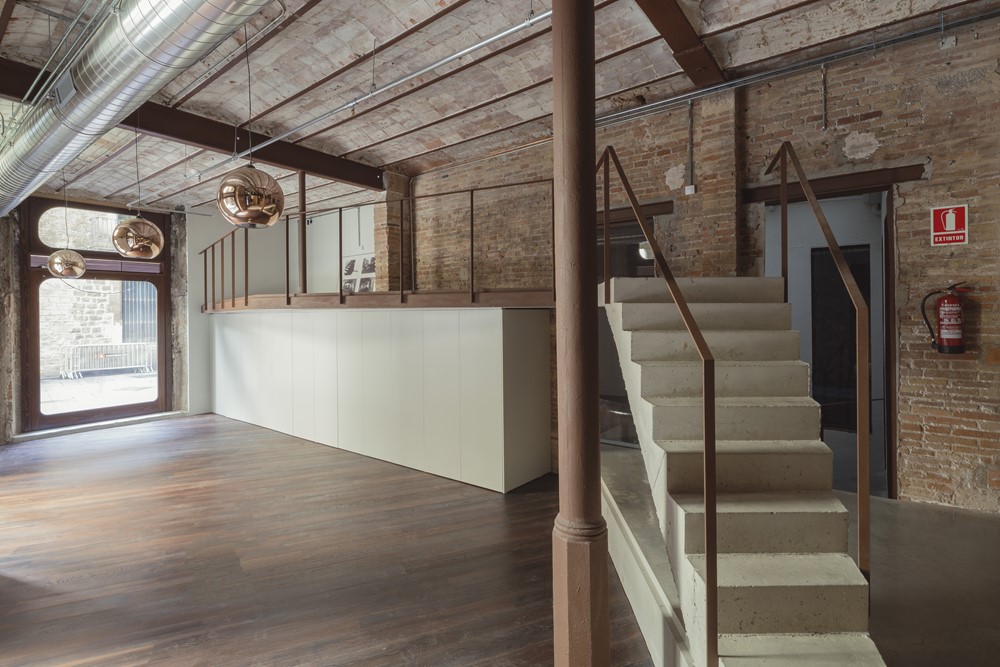 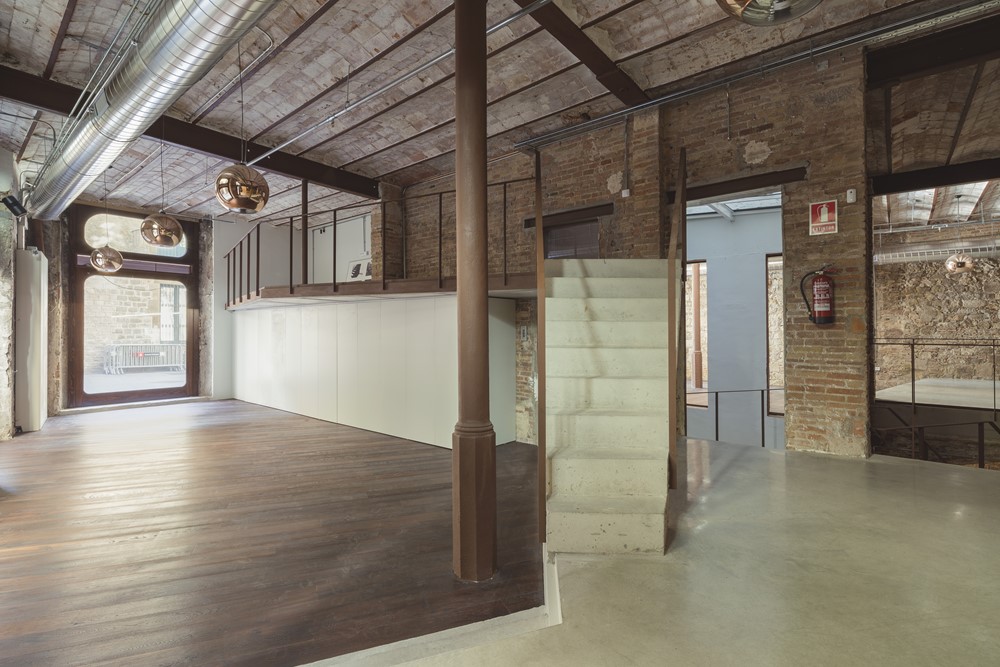 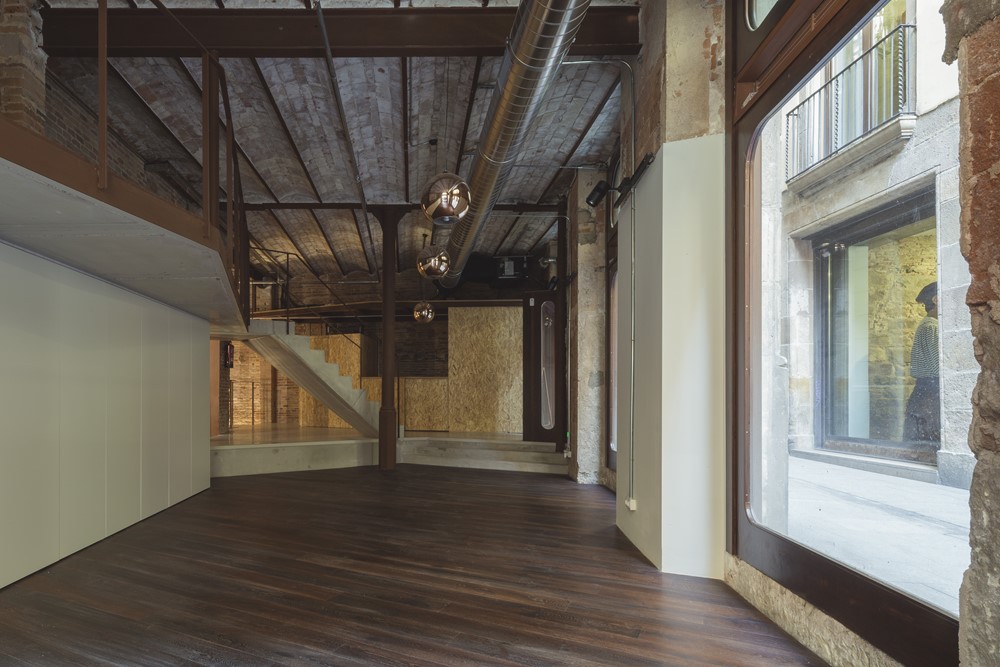 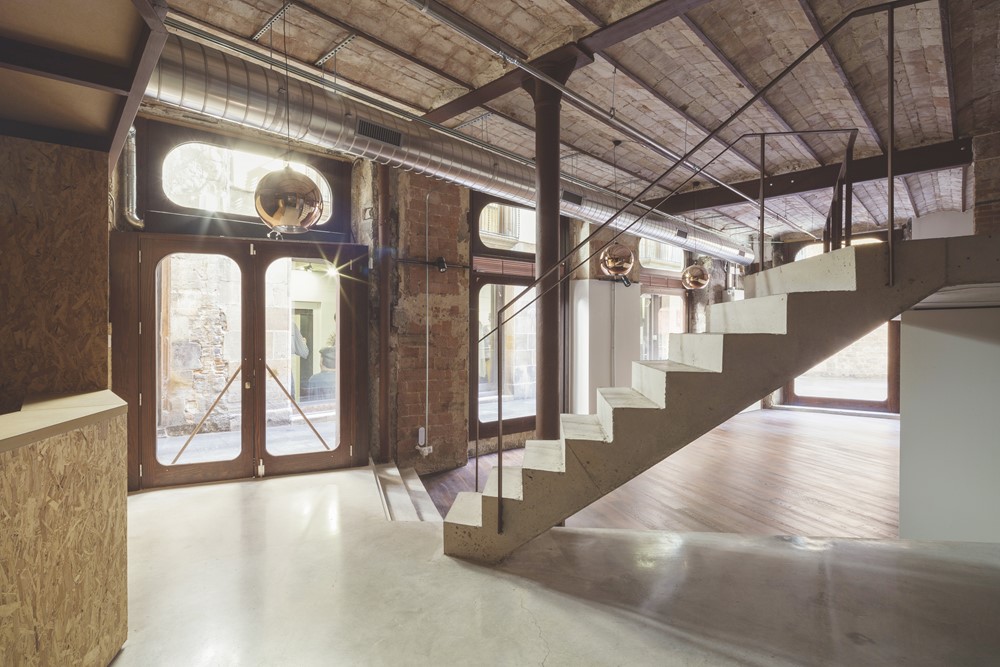 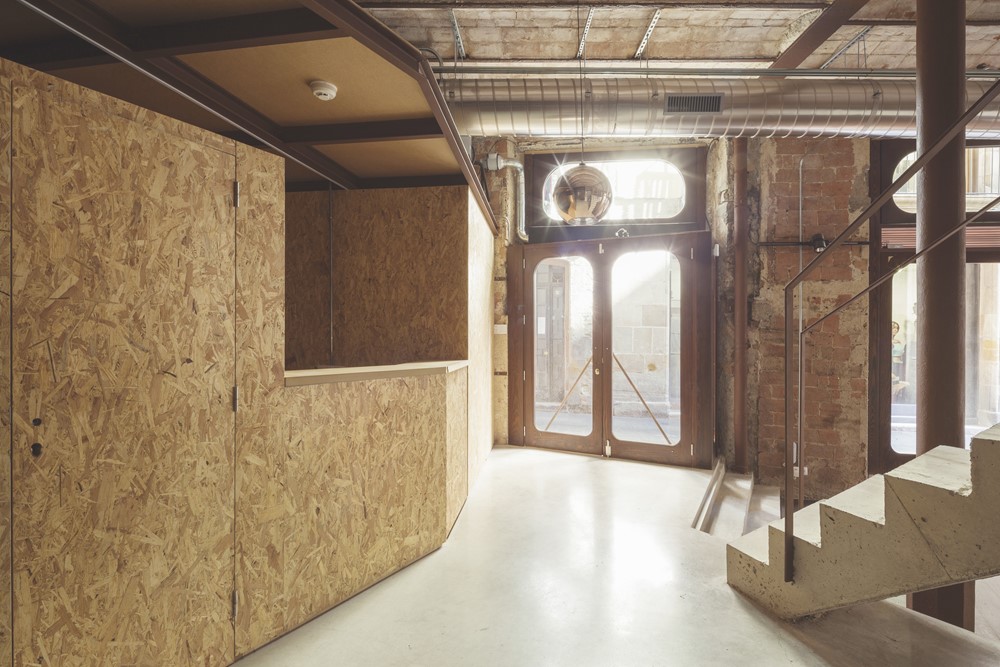 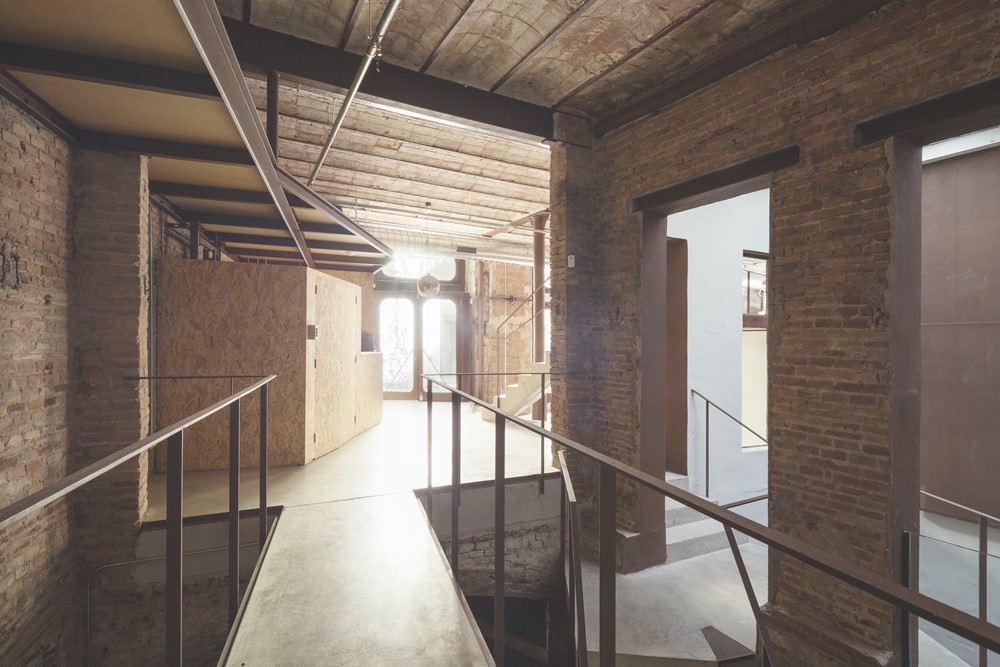 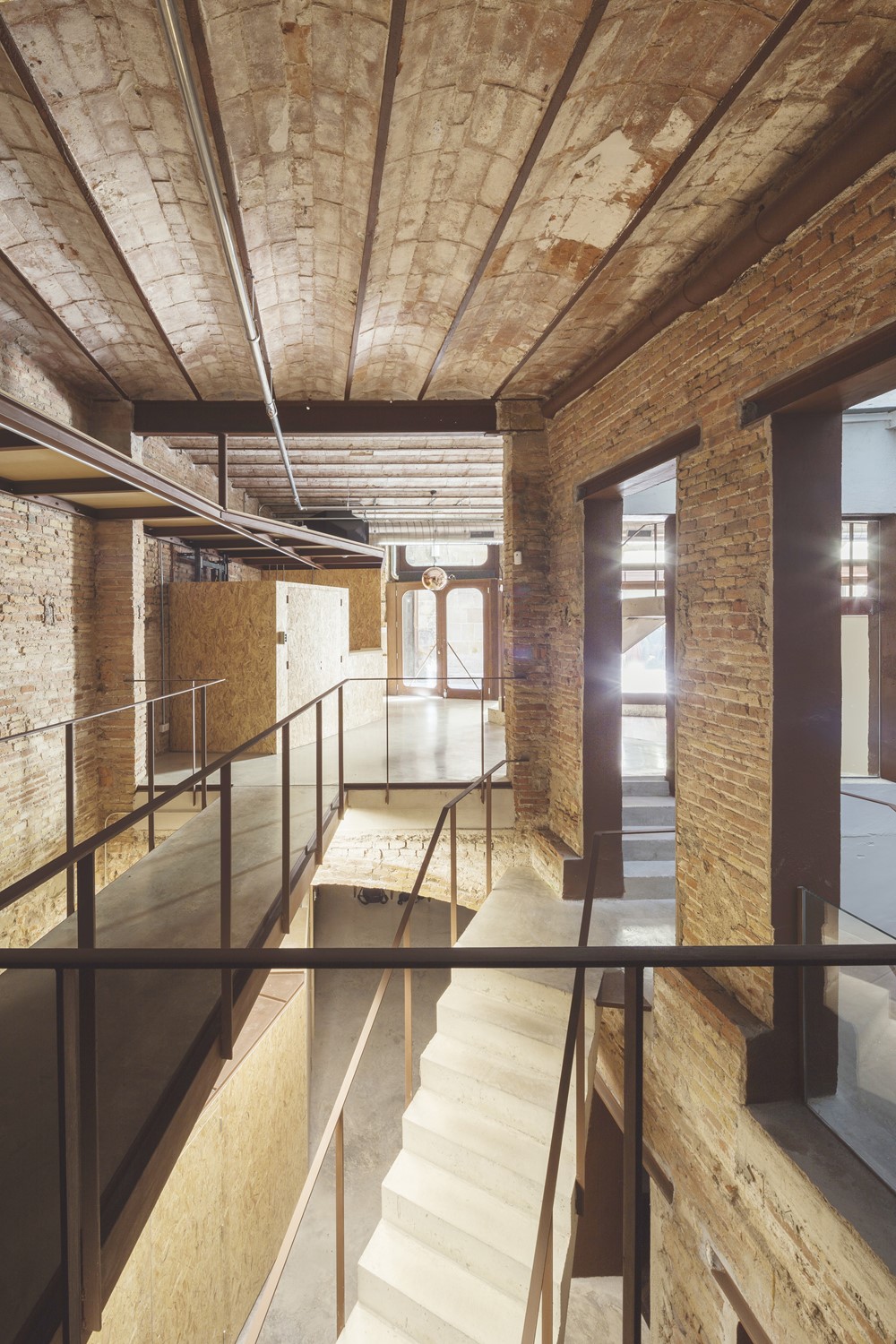 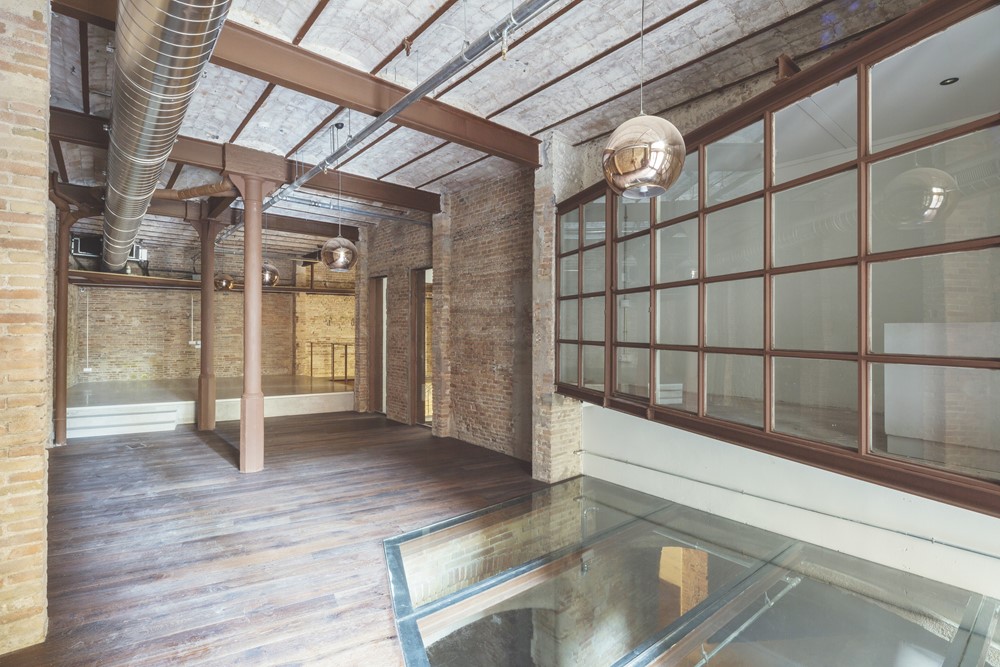 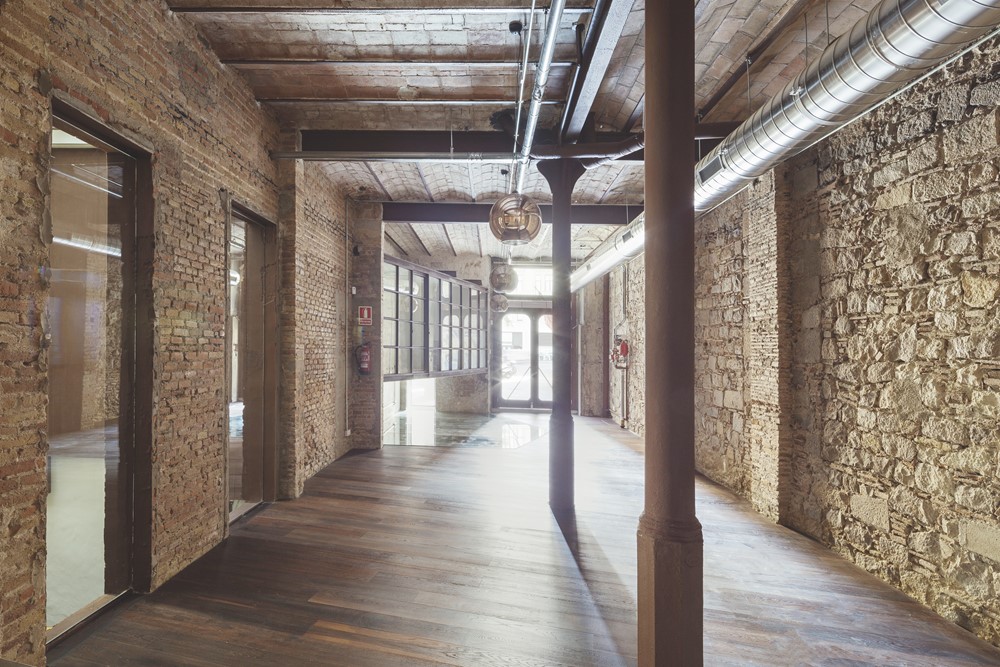 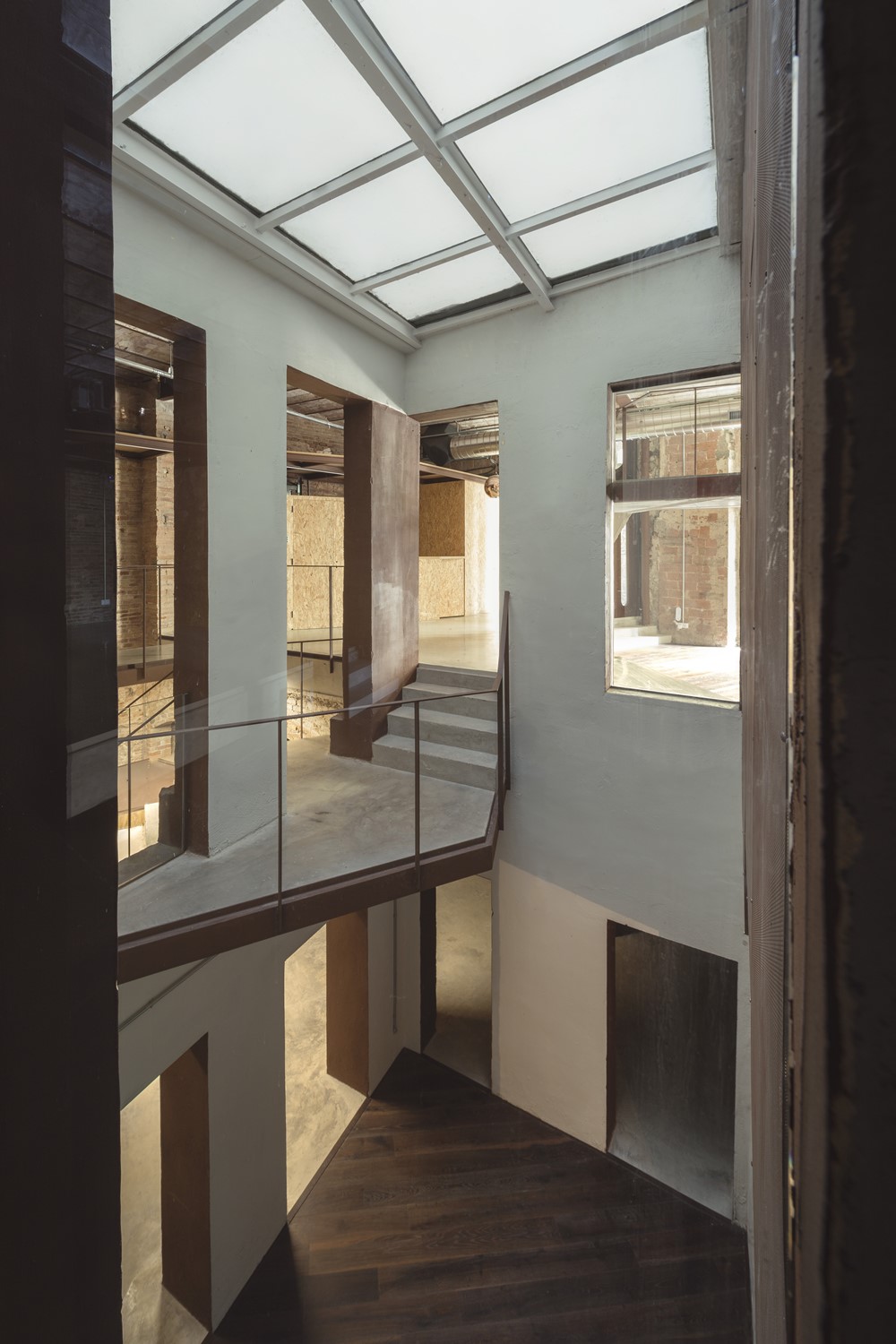 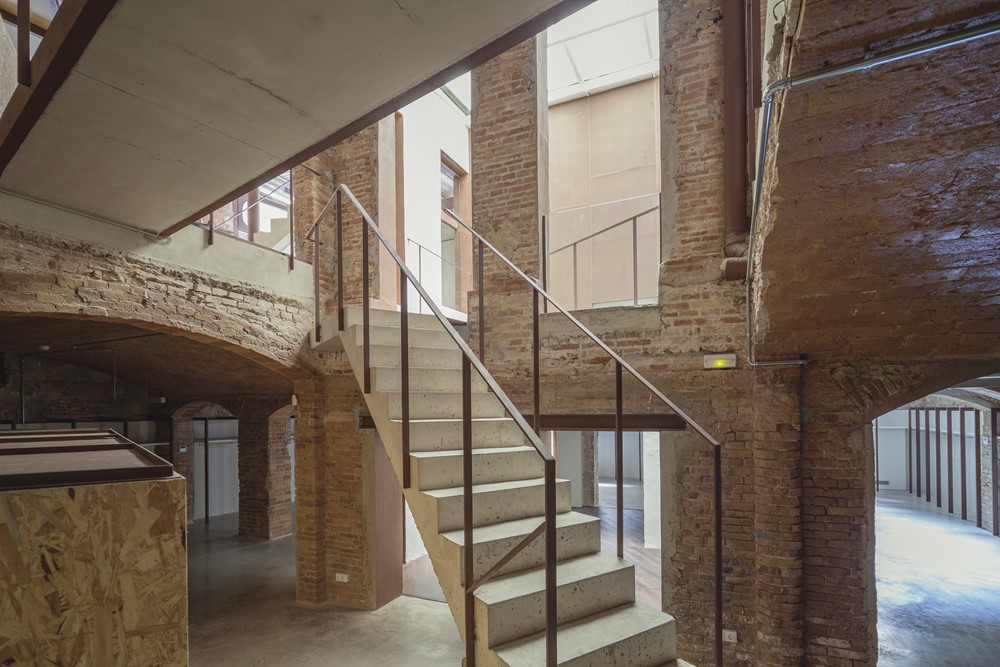 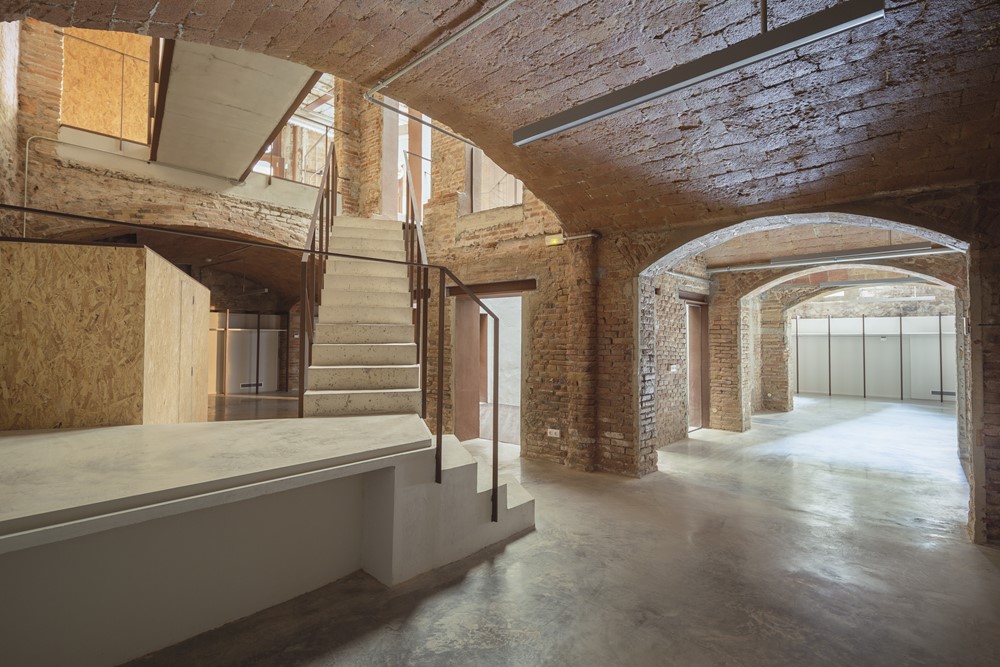 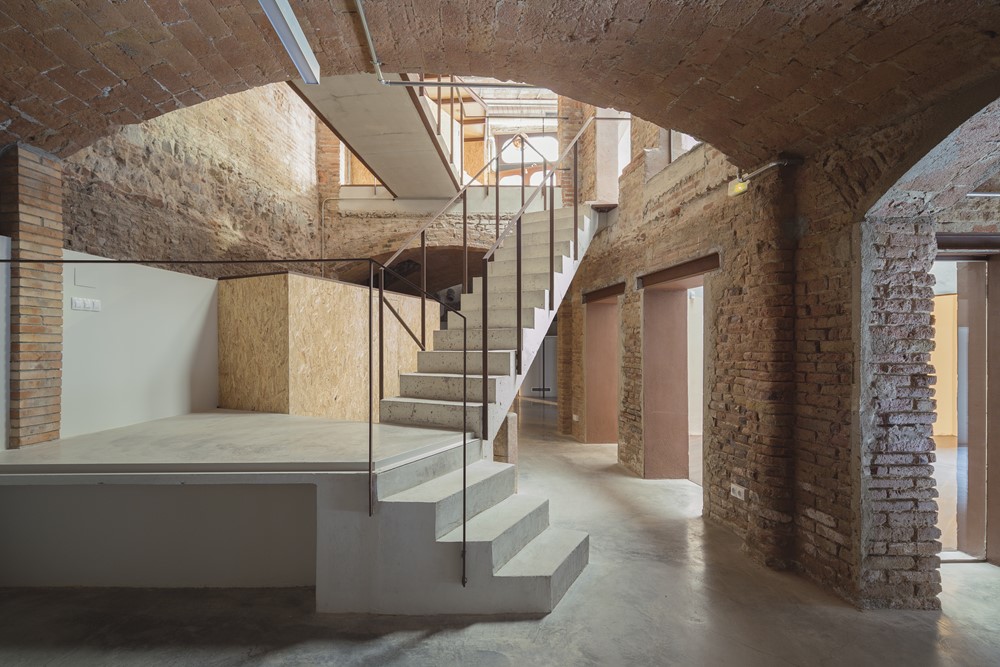 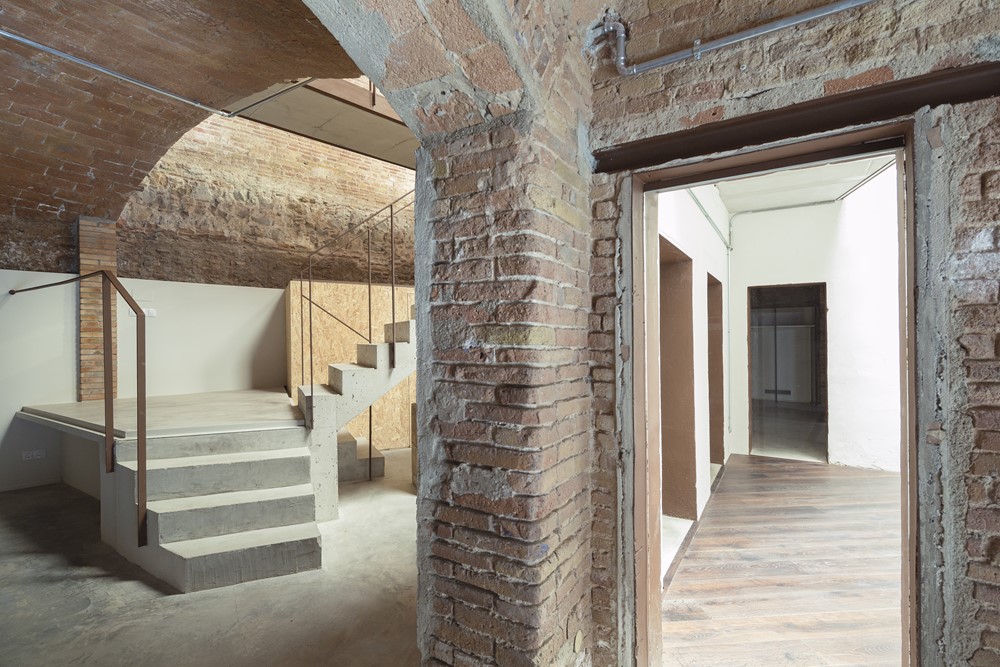 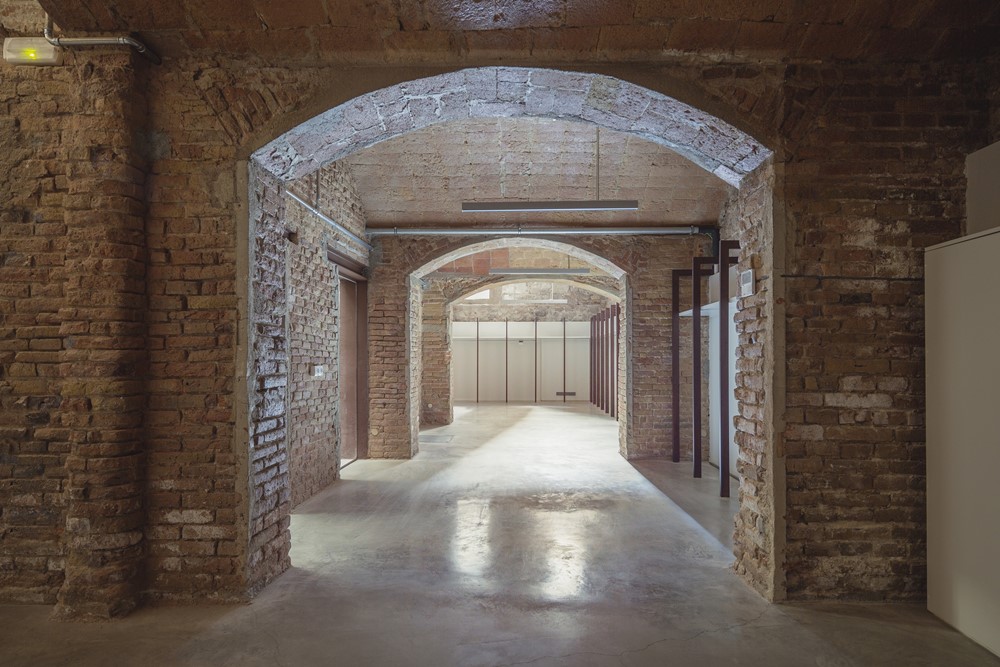 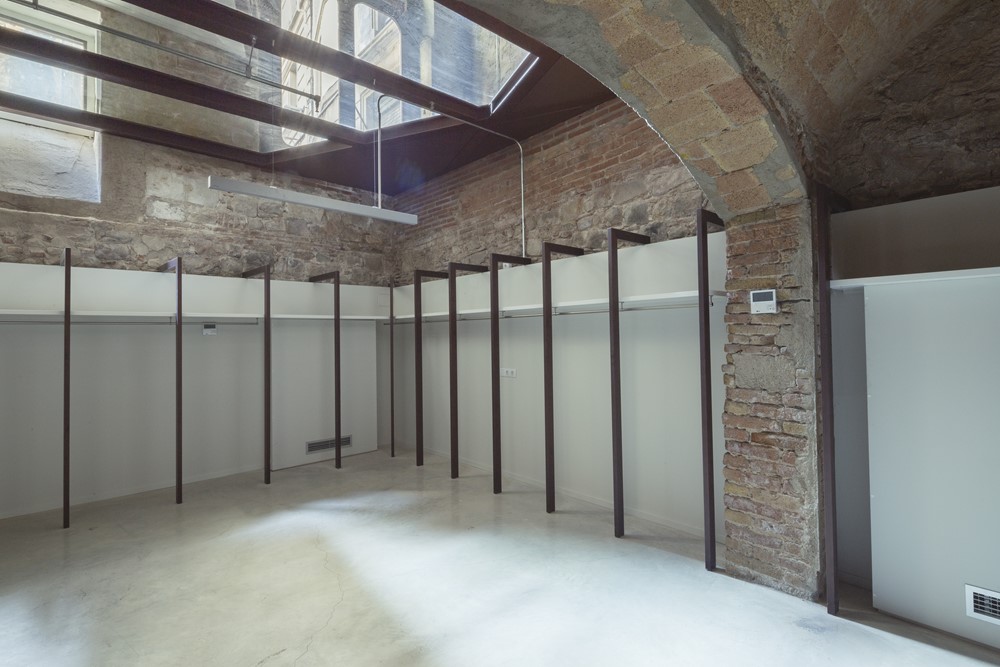 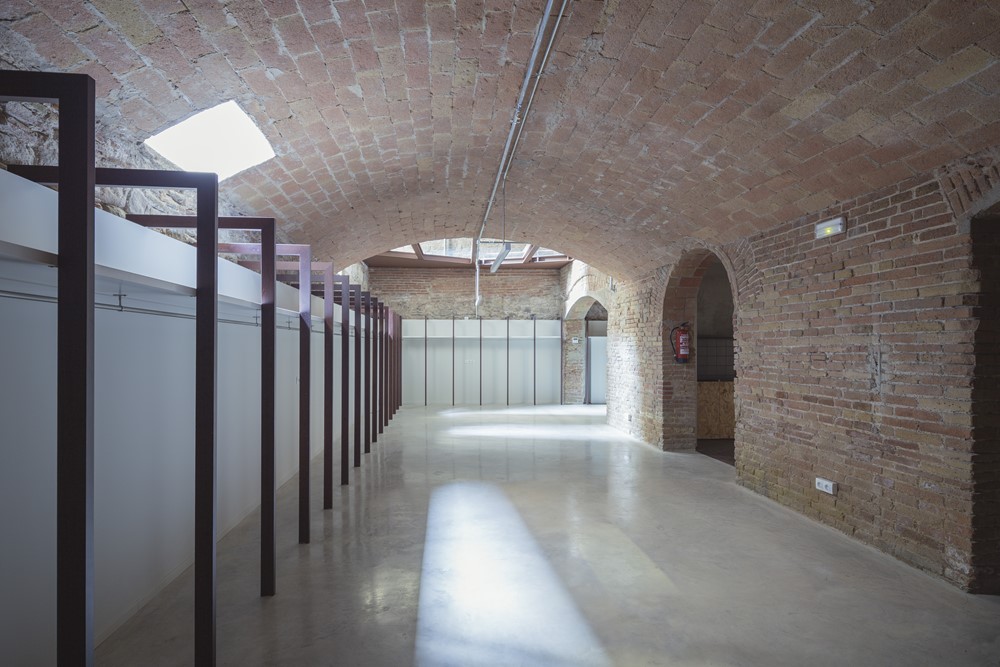 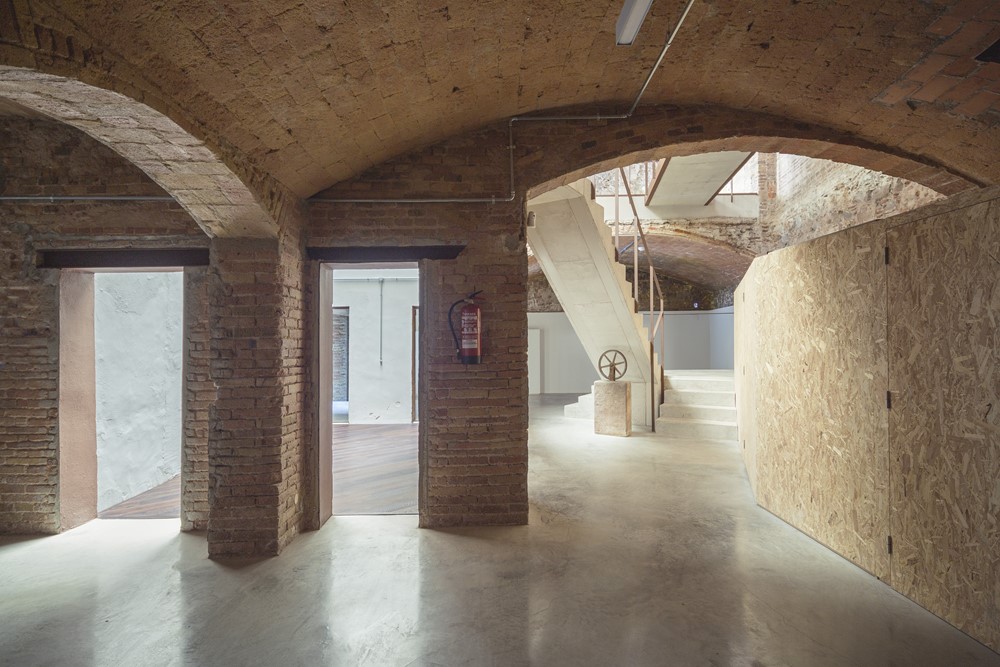 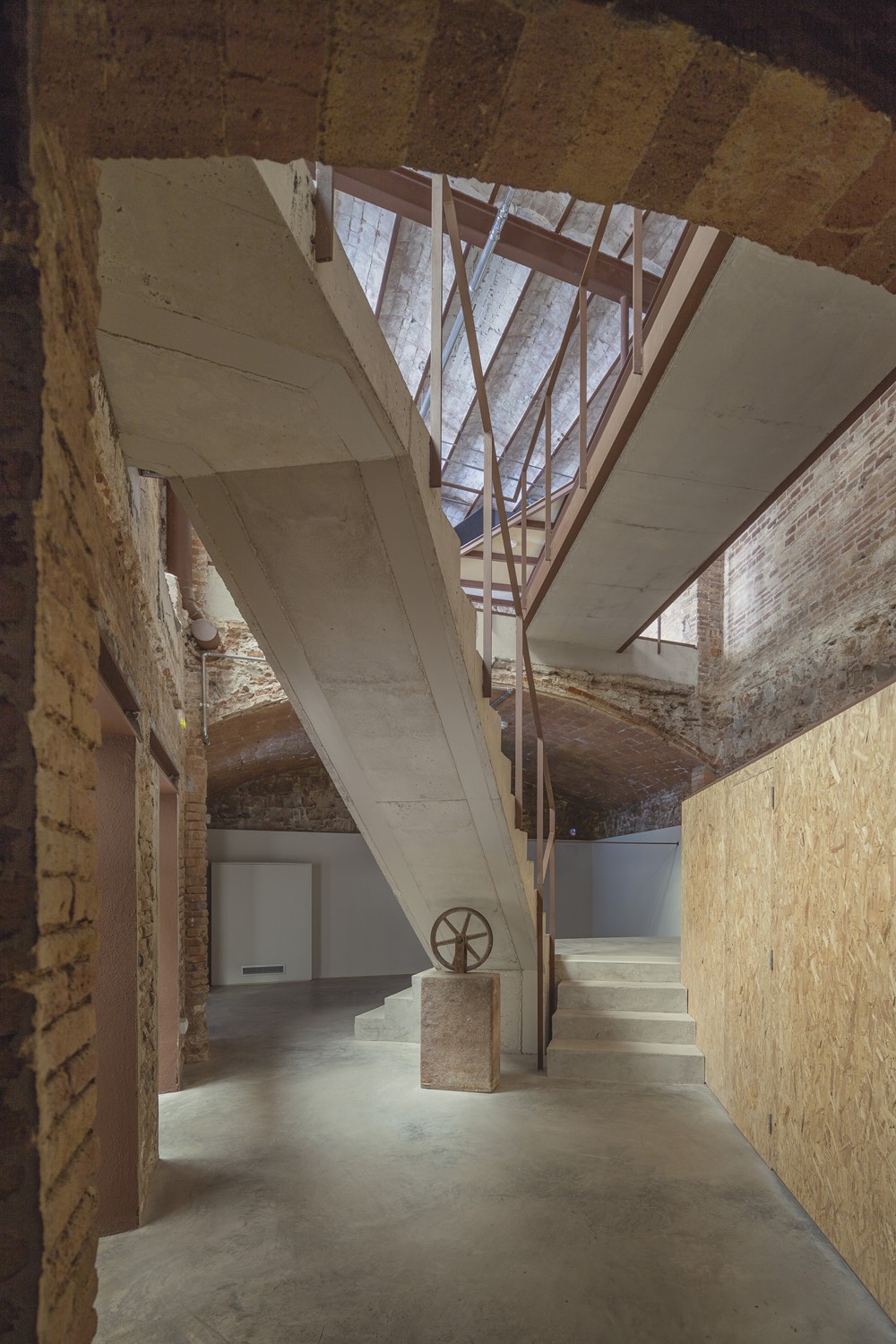 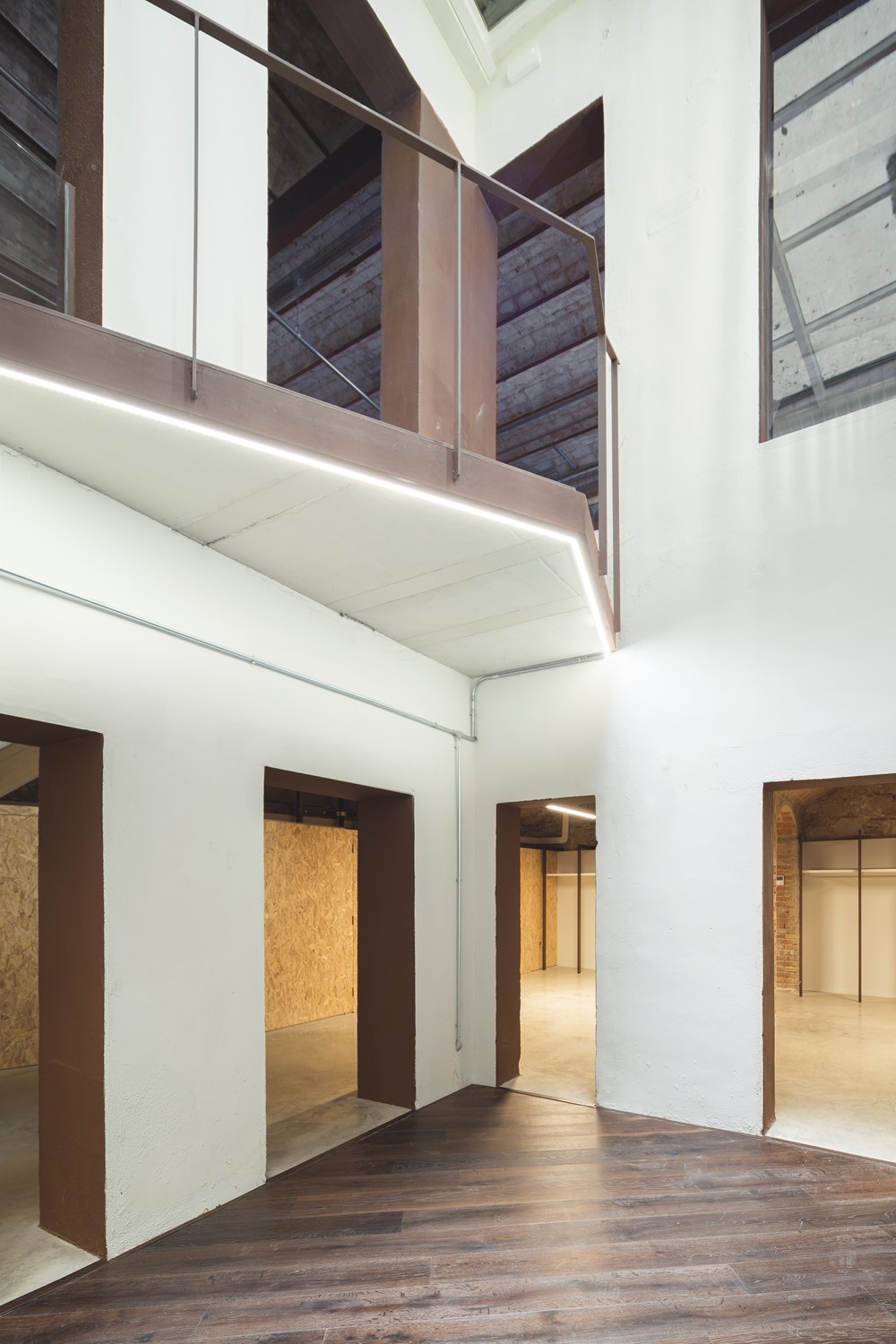 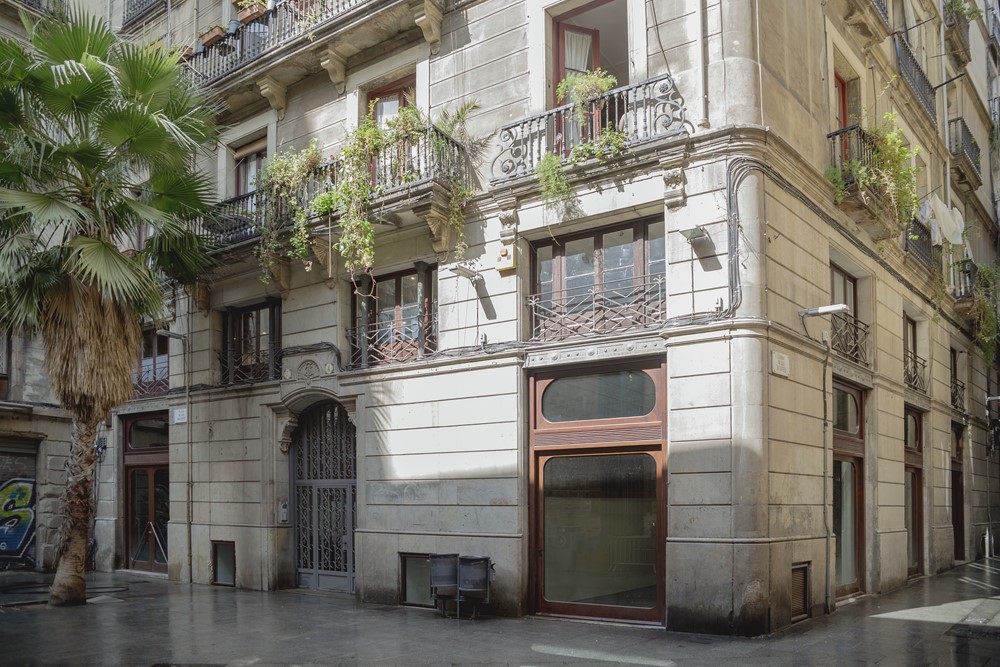 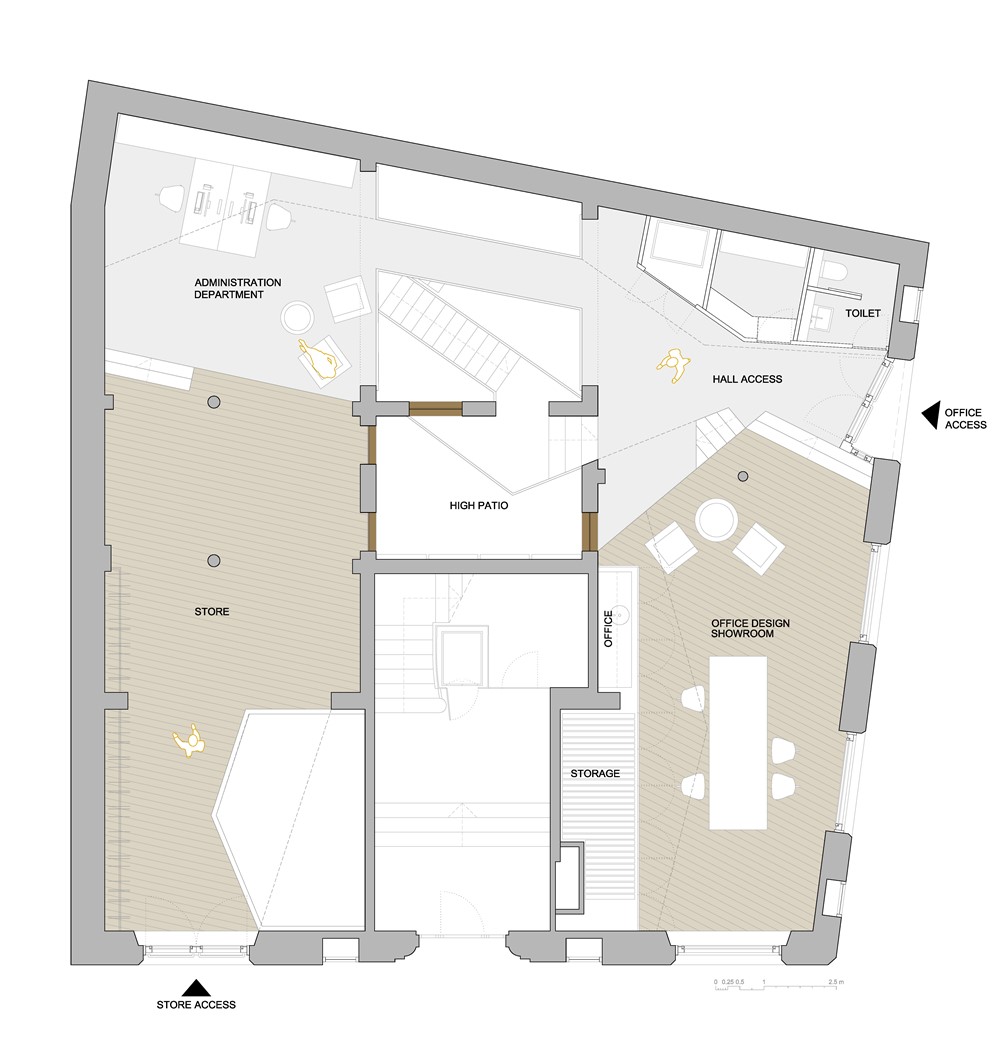 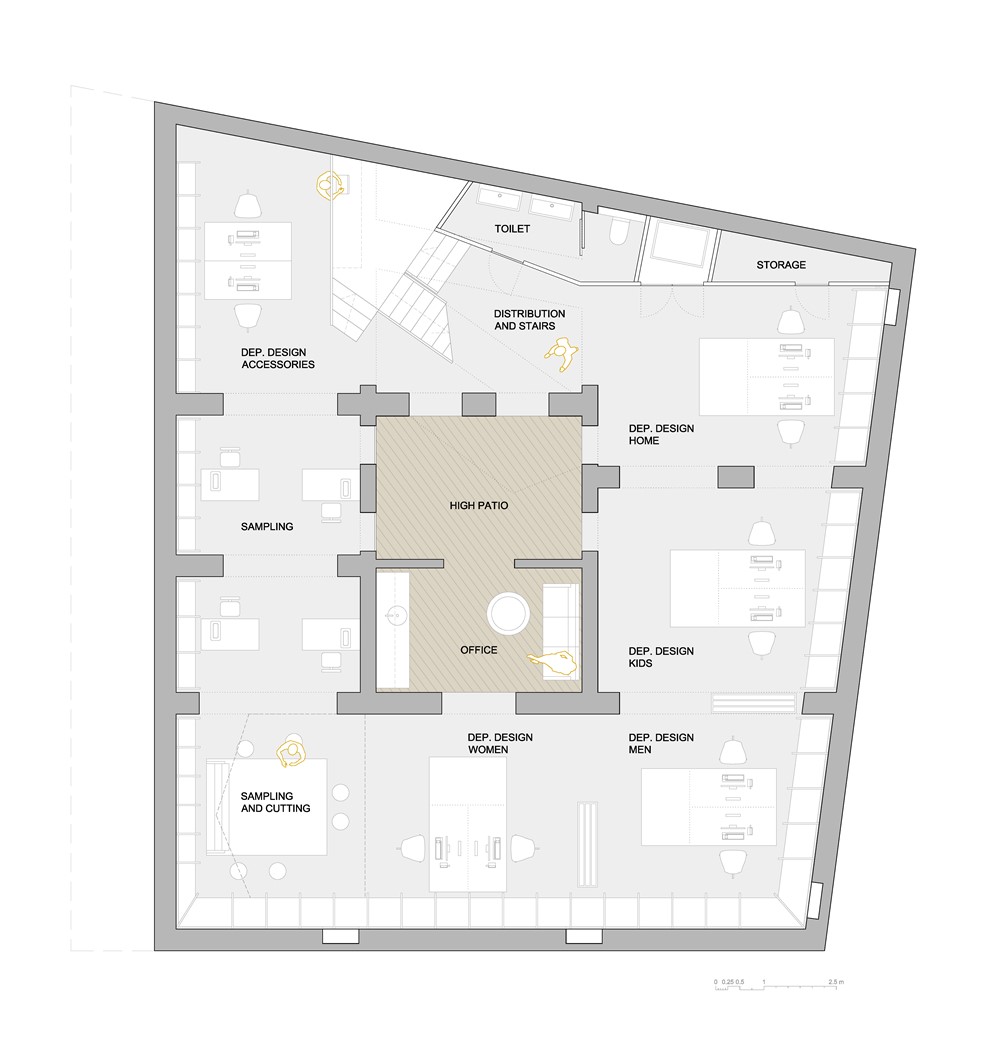 The commercial space is located on the ground floor of a residential building built in the year 1900 in Barcelona’s Ciutat Vella, the Old Quarter. The building’s entry and central staircase, which is ventilated through an adjacent patio, is accessed directly from a square. This results in a U-shaped ground floor that wraps around the patio and central staircase.
The building’s structure is heterogeneous; the upper floors have wooden beams held by load-bearing walls, the ground floor has metallic beams supported by forged iron columns and the basement has stone and masonry load-bearing walls that transition into wide vaults.
When we first visited the space we were surprised to see that 3 of its large openings to the street had been bricked up, limiting the amount of natural light. The ground floor and basement were both heavily partitioned, mostly be wood and frosted glass dividers and some thin masonry walls. The result was a sequence of small, dark spaces that had been created as they were needed.
The main staircase that gave access to the basement was located by the entry at one of the tips of the U. A second staircase had been installed to create a fire exit to the central patio. The two openings oriented to the square were both the entry and fire exit.
With the objective of converting the ground floor into a concept store and showroom and the basement into the design studio, the spatial intervention consisted of catching as much natural light as possible by reopening windows and the suppression of interior partitions. This made the structural typology more evident and brought attention to the building’s structure while improving the relationship between the interior and exterior, benefiting not only the building but also the street, which was previously flanked by a large opaque wall and now has three very large openings that allow the passer-by to look across the interior all the way to the square. Opaque walls have been transformed in large openings of wood and completely transparent security glass.
The new functional scheme has modified the position of the staircase to a more central location on the posterior side of the patio. The connection between floors has been simplified with the construction of a single, reinforced concrete staircase fitted into a new opening that was created by cutting out a quadrant of vault. The opening of the original staircase has been sealed with weight-bearing glass, converting it into a skylight that illuminates the basement. By liberating the patio of the fire exit staircase, the central zone is converted into a double height space that becomes the project’s lung.
The store’s access was decentralized, maintaining the main entry from the square, placing the concept store on the most public side of the commercial space. The secondary access is placed on the side street at the opposite end of the floor plan, linked to the design studio and showroom.
The project also contemplated reducing the area occupied by mezzanines that fragmented the space. A smaller surface is maintained in the showroom’s area, which is accessed by a new concrete stair with the same constructive language as the main staircase.
The intervention of Beates recuperates the connection between the store and the street, pulling in as much natural light as possible into a space that marries noble and comfortable materials with the early 20th century’s constructive tradition, in line with the philosophy of the brand that will occupy the space.
Photography by nieve