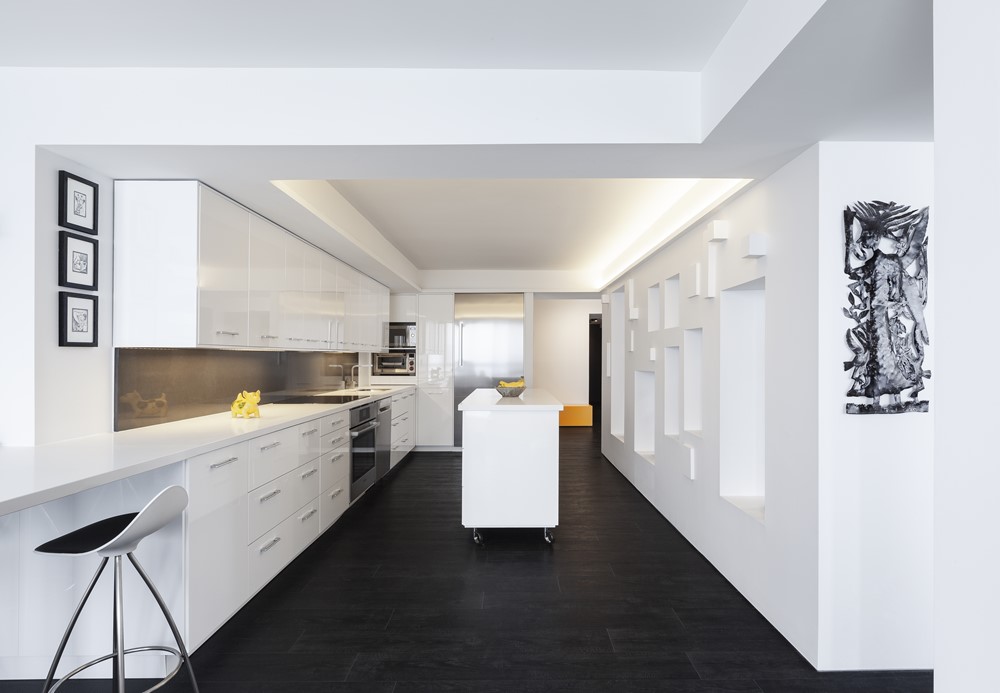 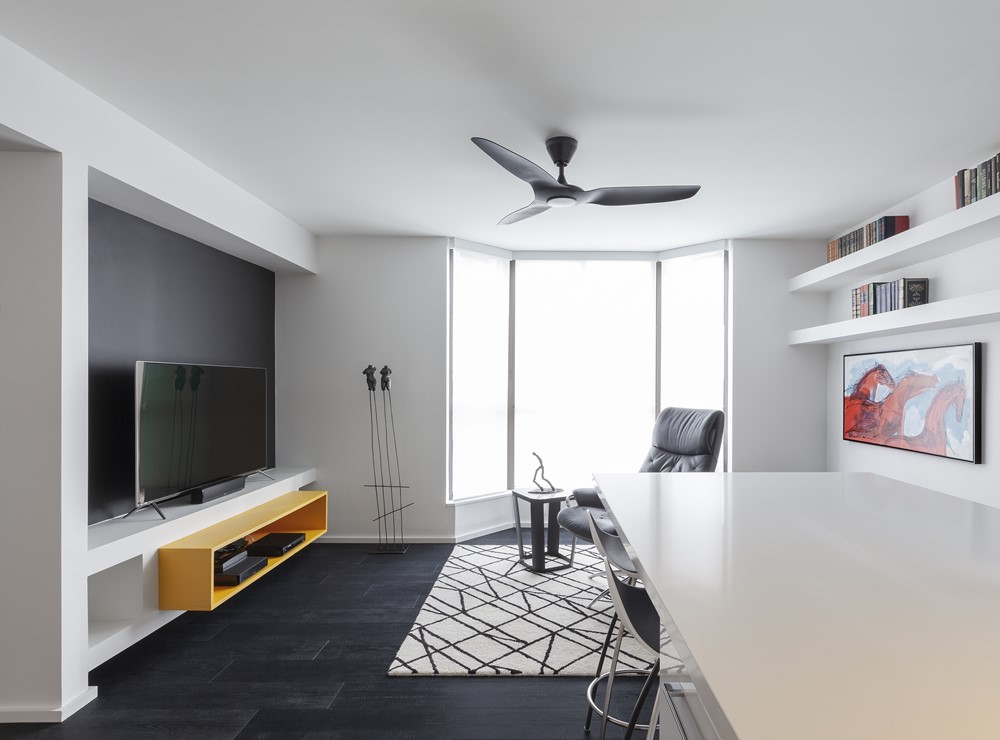 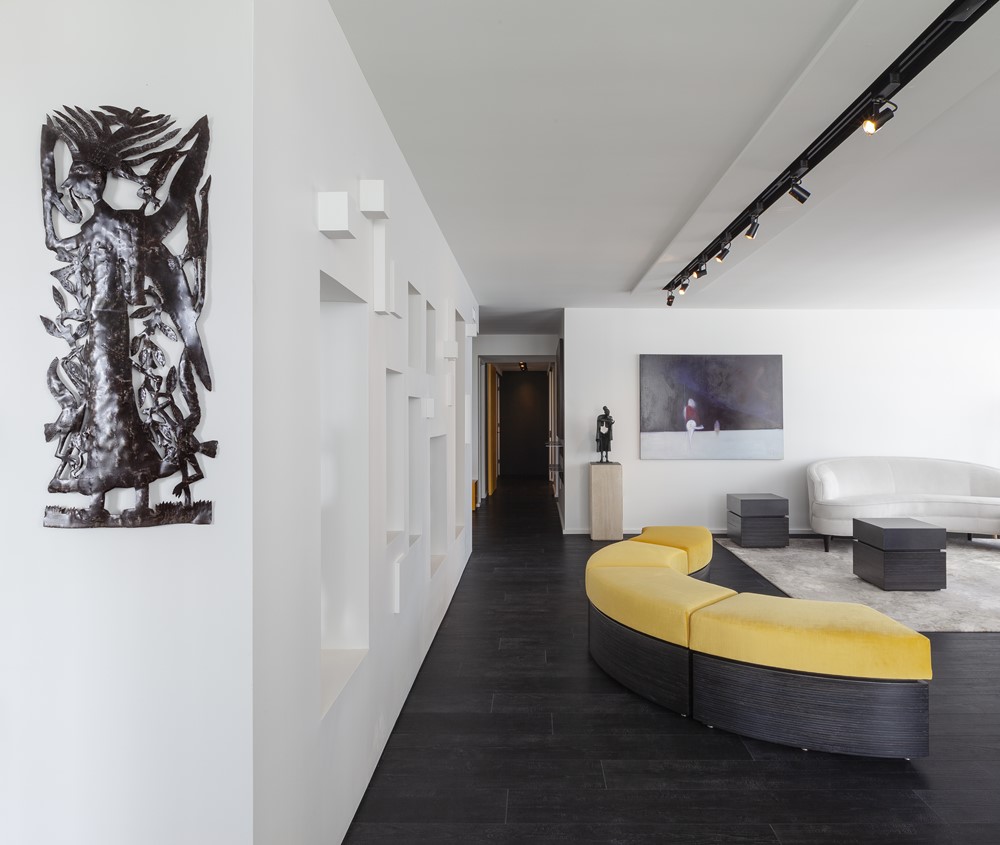 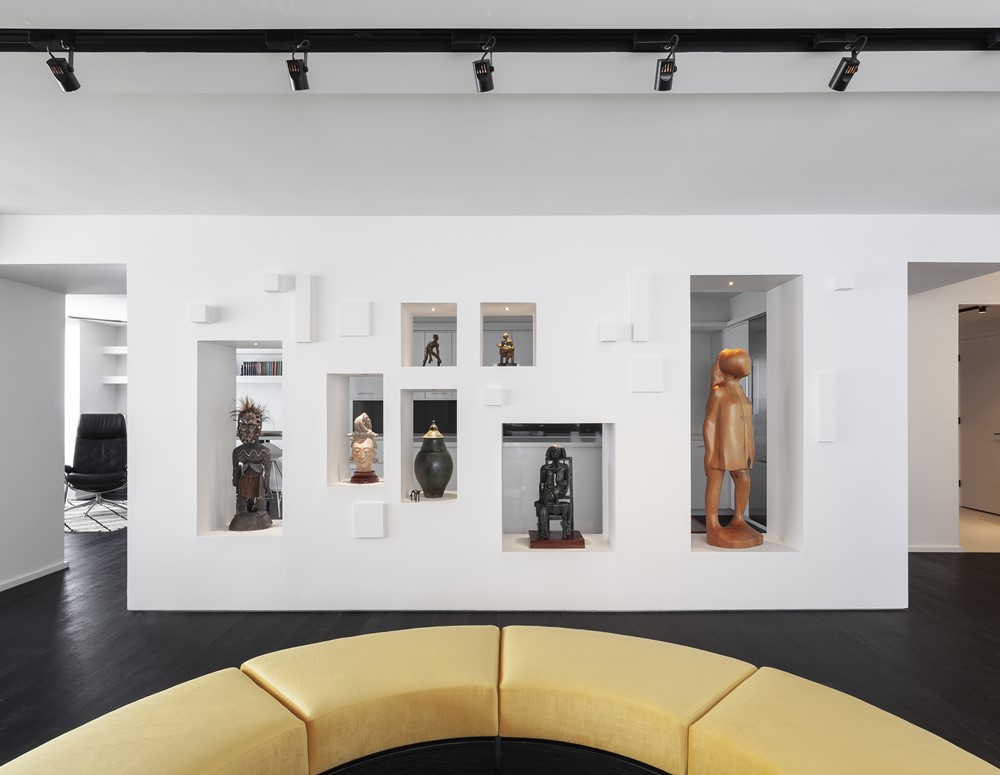 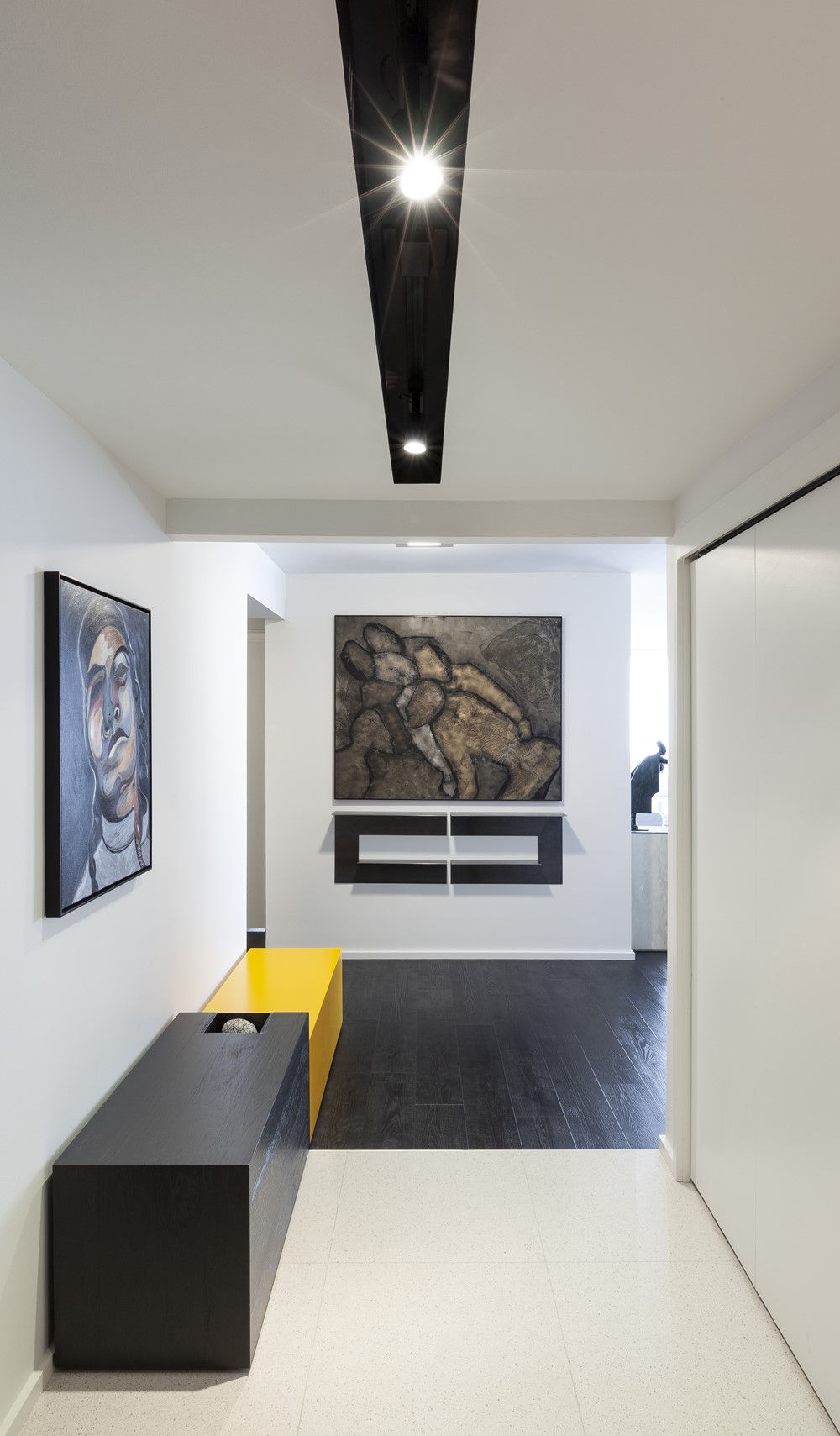 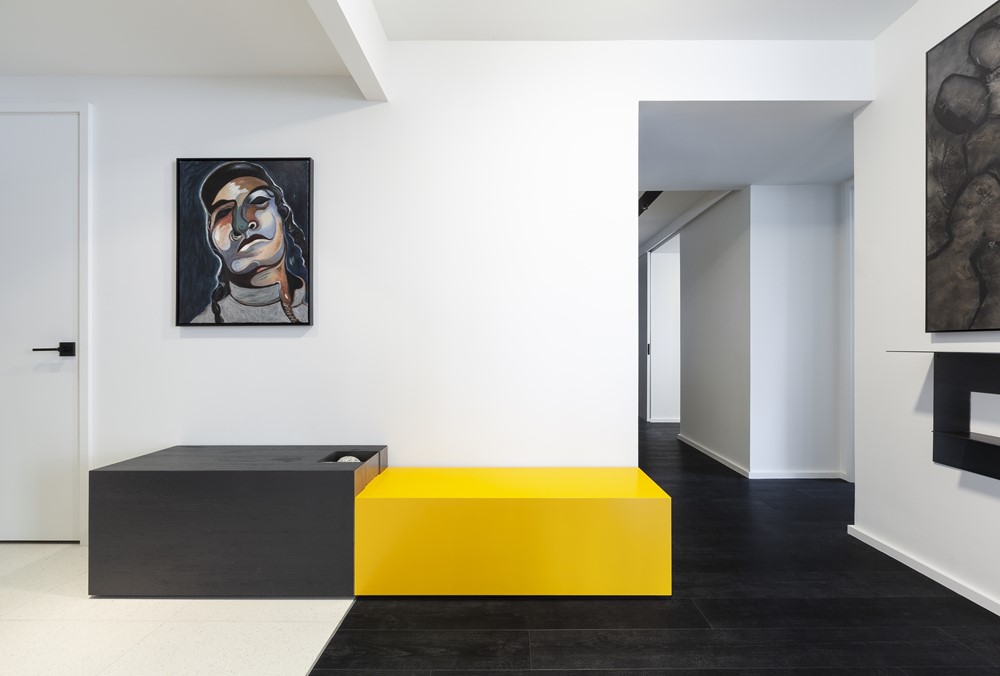 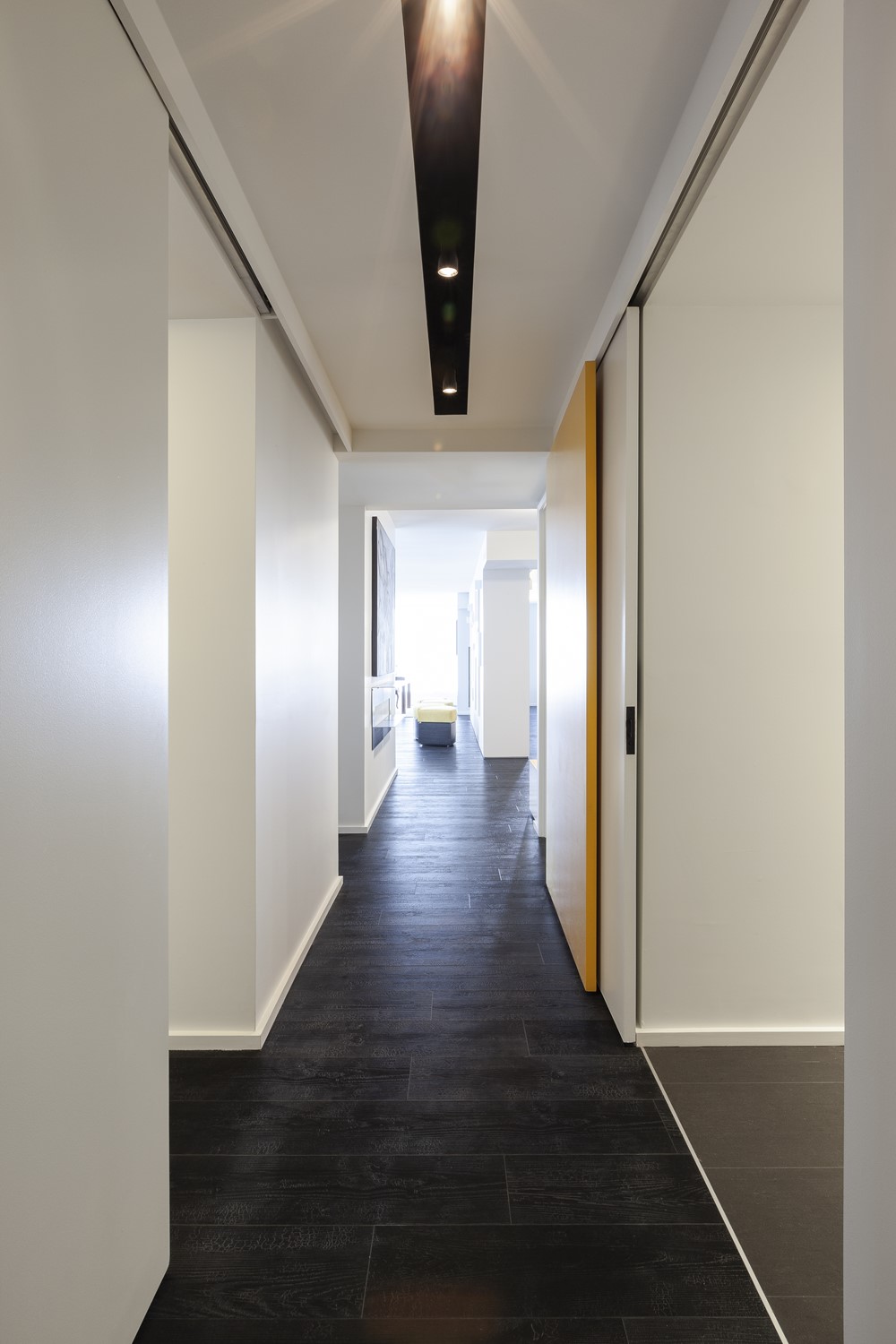 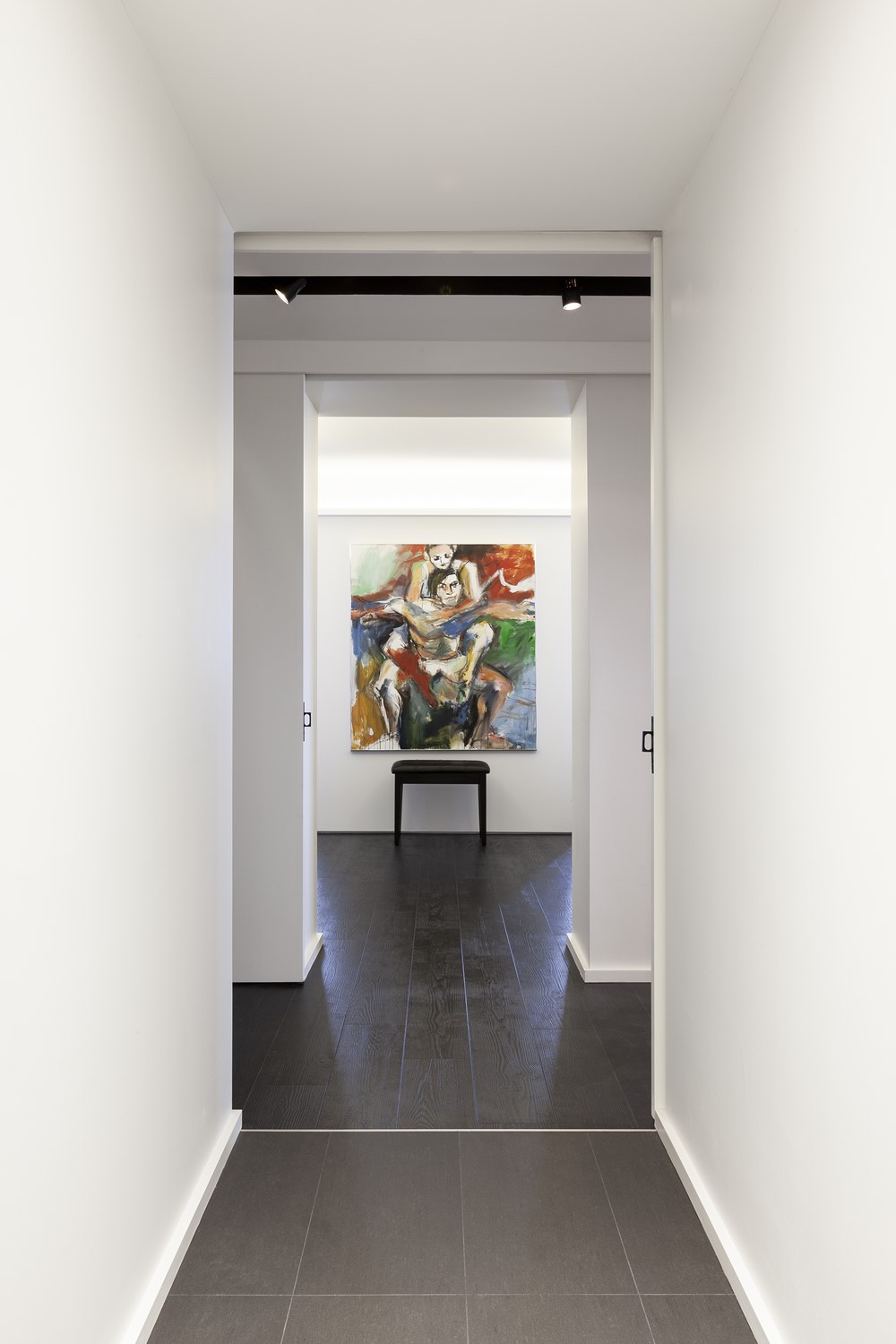 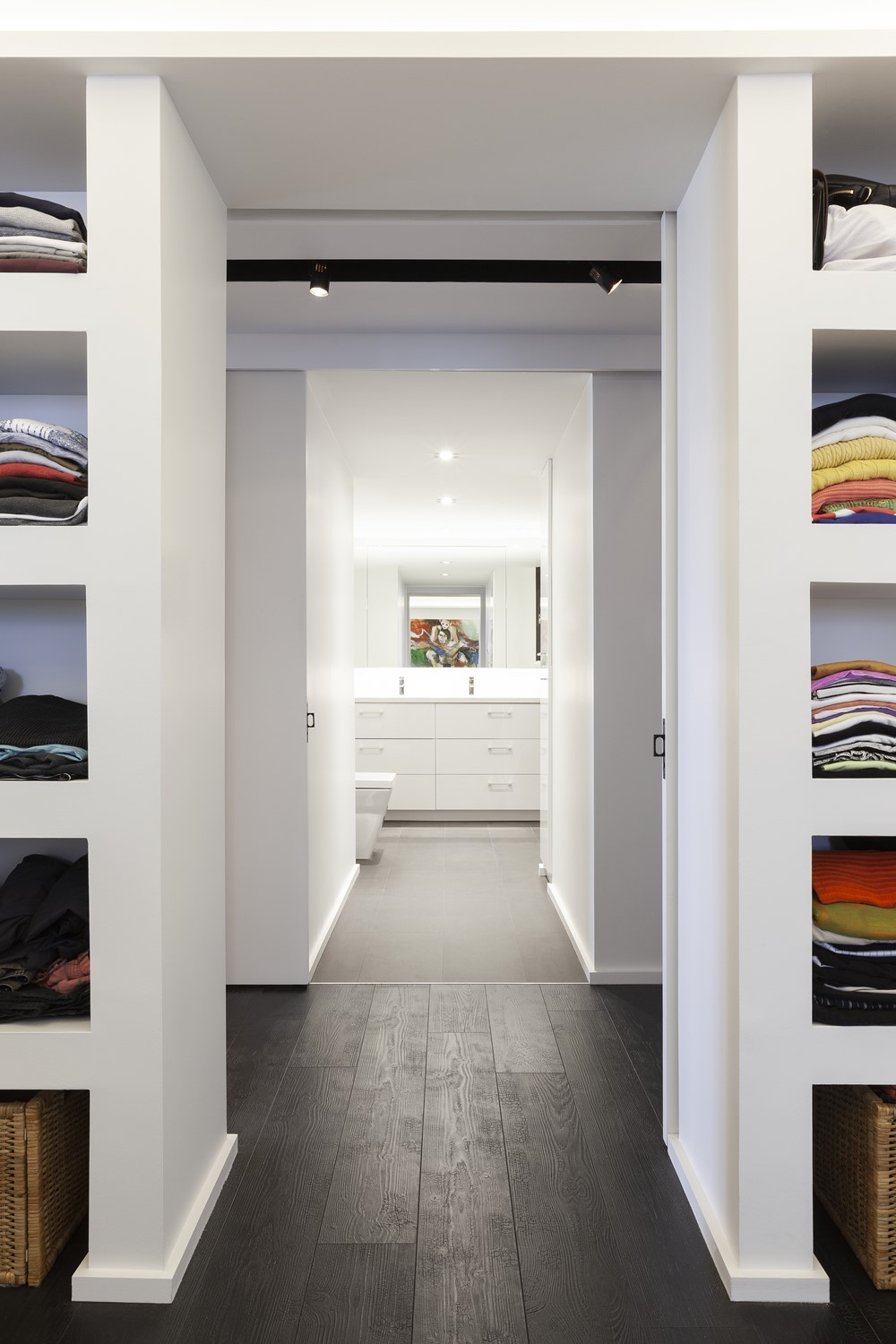 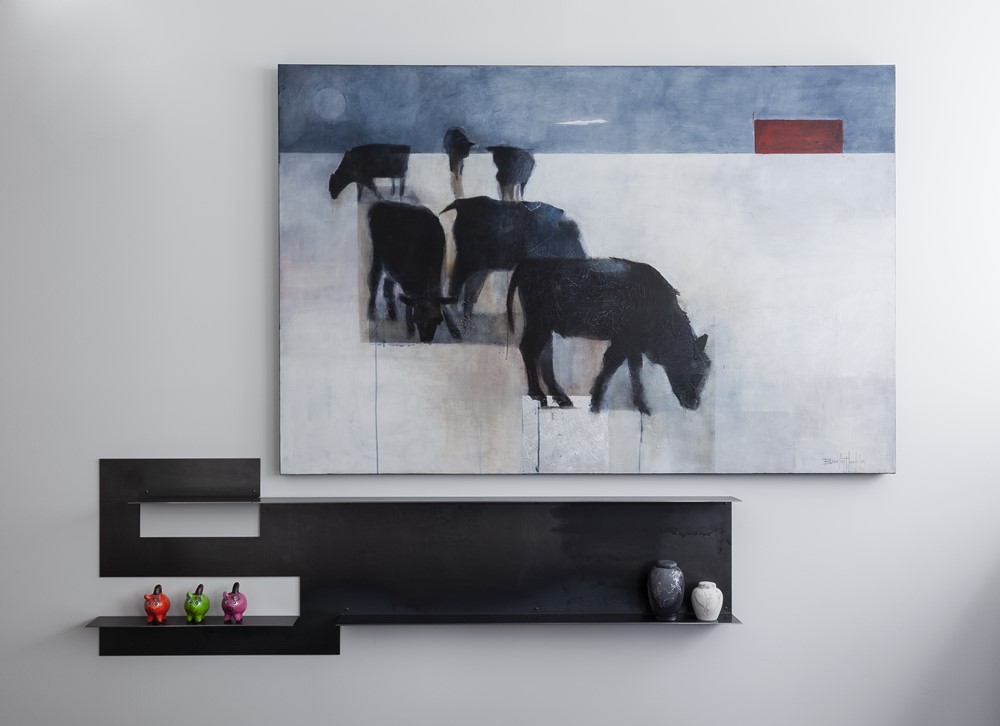 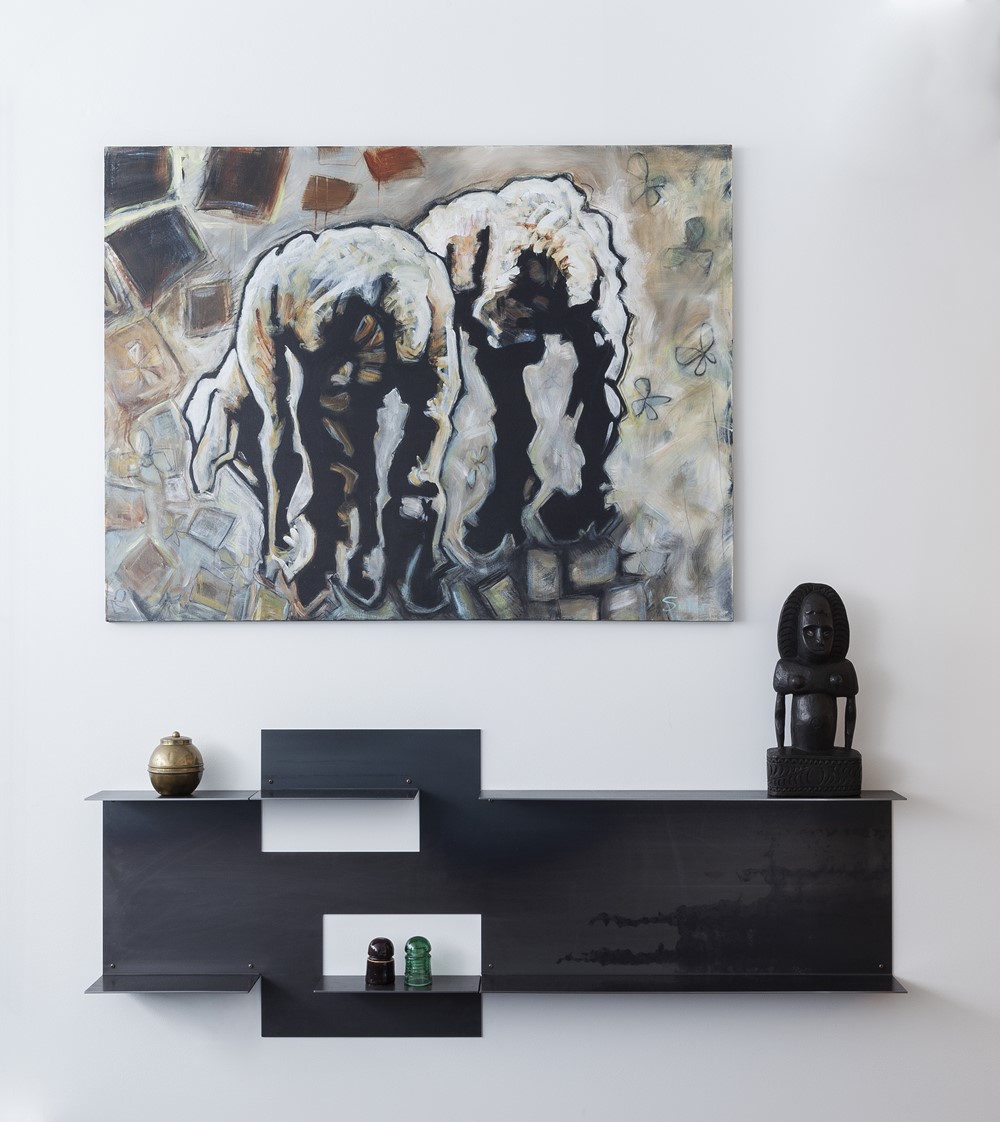 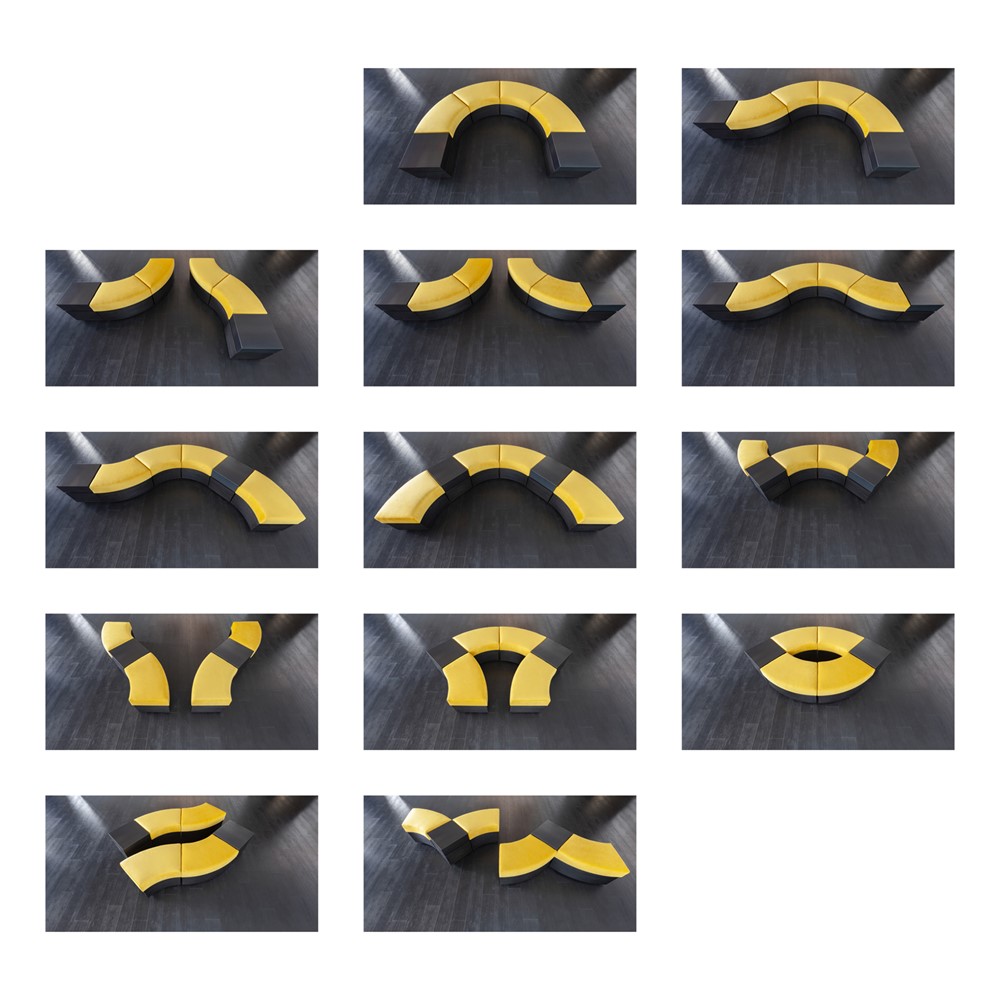 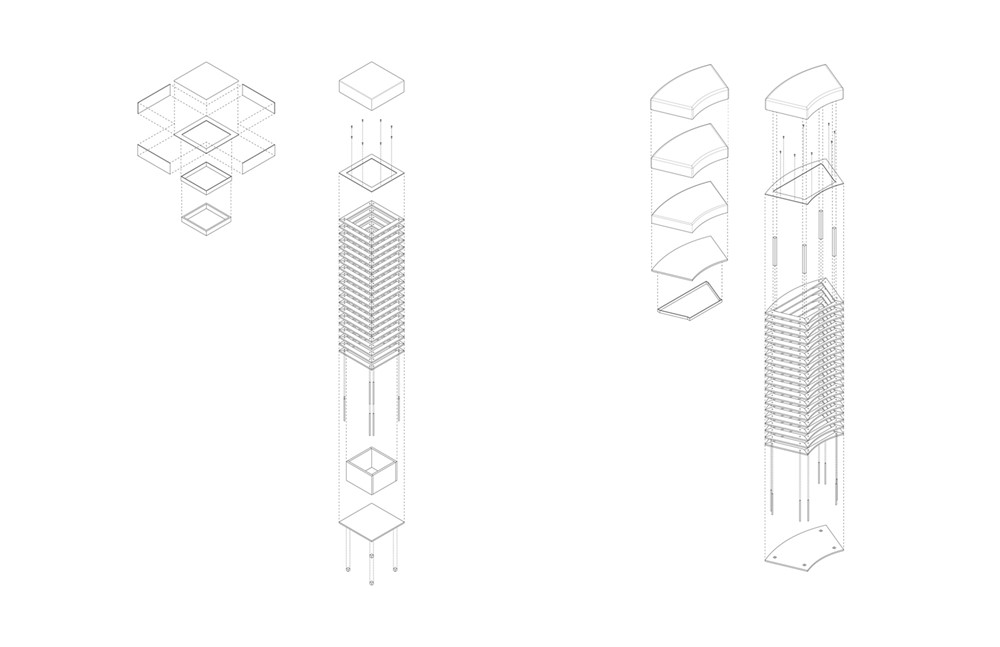 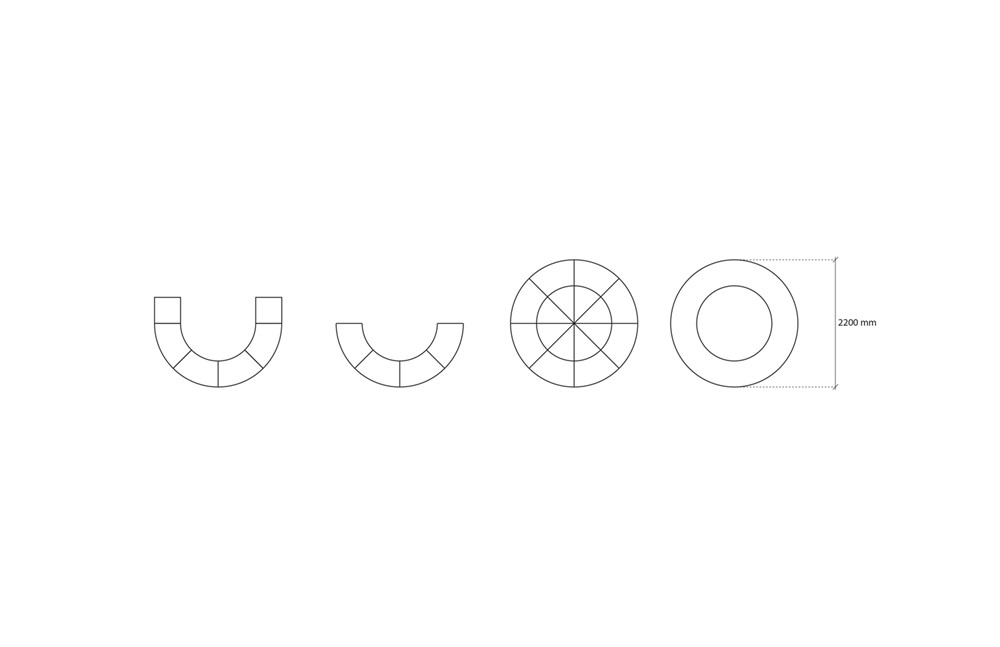 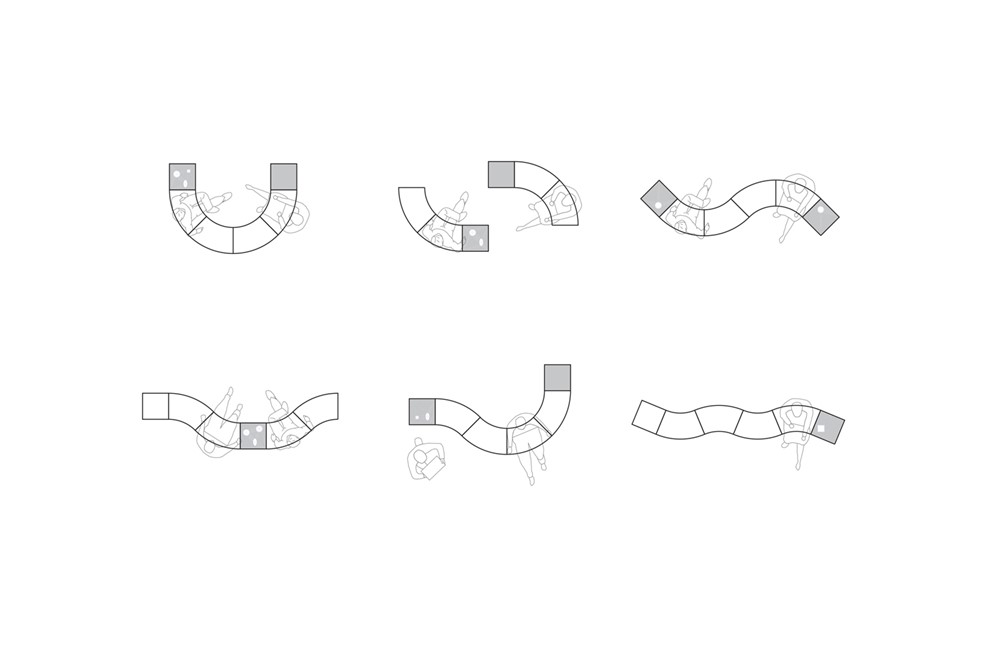 In these projects, what was once very generic, overly defined programmatically, and cluttered spatially was given a clear spatial order, latent in the existing floor plan, and simplicity that conforms to the resident’s specific lifestyle. These have been termed “architectural interventions,” in which the outcomes stand in-between interior design and architecture.
DOHA, like its predecessors, transforms the typical Torontonian condominium unit into an architectural space where the residents’ lifestyle is truly appreciated. Originally, the rooms were arranged inefficiently without a clear spatial order. Programs were “stuffed in” generically, which resulted in doors that collided, passages that looped around the cabinets, walls that broke movements and made rooms feel smaller. To “cure” this space, the atelier first demolishes all the removable pieces and establishes an order inherent in the old plan, which is the straight, double-loaded hallway that runs from one end of the unit to the other. All the rooms are realigned based on this central passage and the unremovable parts of the unit, such as kitchen and washrooms. This radical linearity not only unveils the clear sightline that allows one to perceive the entire spatiality of the unit, but also offers an imaginative dimension to the space; with a window on one end and the wall painted black on the other, the horizon line of the hallway is obscured by brightness and darkness respectively, creating a greater sense of depth and transitional atmospheres in entering public and private realms. Other design elements are also enforcing this long axis — examples are linear ceiling track lights accentuating it and sliding doors keeping it uninterrupted with an animated view at all time.
Client: Private
Budget: Withheld
Architect: rzlbd
Lead Designer: Reza Aliabadi
Project Team: Arman Azar, Aziza Asat, James Chungwon Park, Bahar Joshan
Construction Management: Maxamin Homes
Architectural Photography: Borzu Talaie
Location: Toronto, North York, Willowdale area
Living Area: 1950 sqft
Design: 2015-16
Completion: Fall 2018