For a long time, this semi-detached house built in the 1950s in Montréal’s Ville-Saint-Laurent neighbourhood was home to a family of three young children. Over the years, many extensions were added to its aging structure. At the back, its broken-up spaces had only one opaque door and four small windows. Built without a foundation and worn by time, the annexes in the backyard were keeping the abundant natural light from coming into the kitchen. After the children fled the coop, the house was due to undergo major renovations, particularly to meet the needs of the owner’s new lifestyle. The owner entrusted his project to L. McComber architects with three goals in mind: open the living spaces, make the most of the natural light and garden view, and preserve the spirit of this family home filled with memories. Photography by Raphaël Thibodeau. 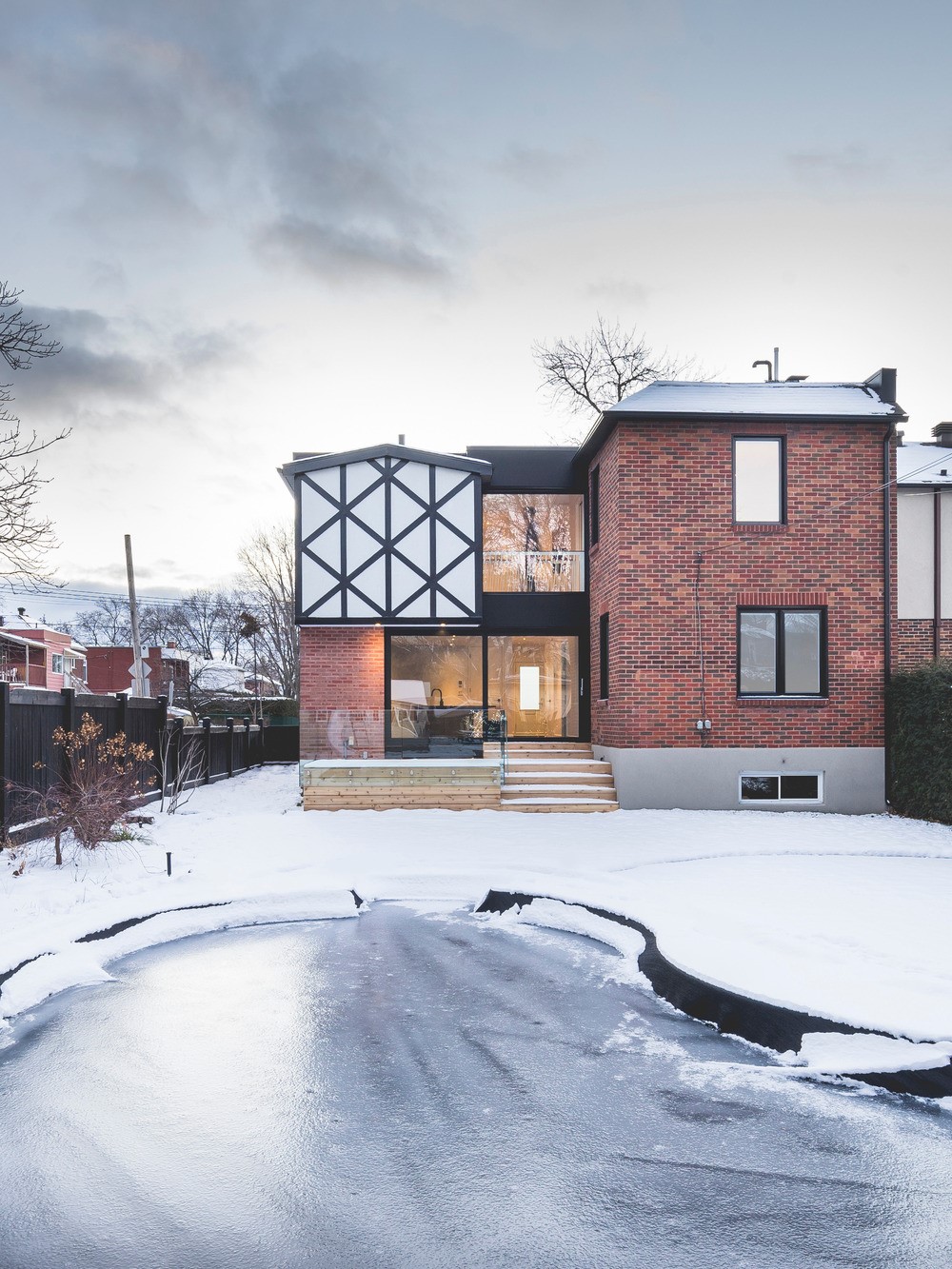 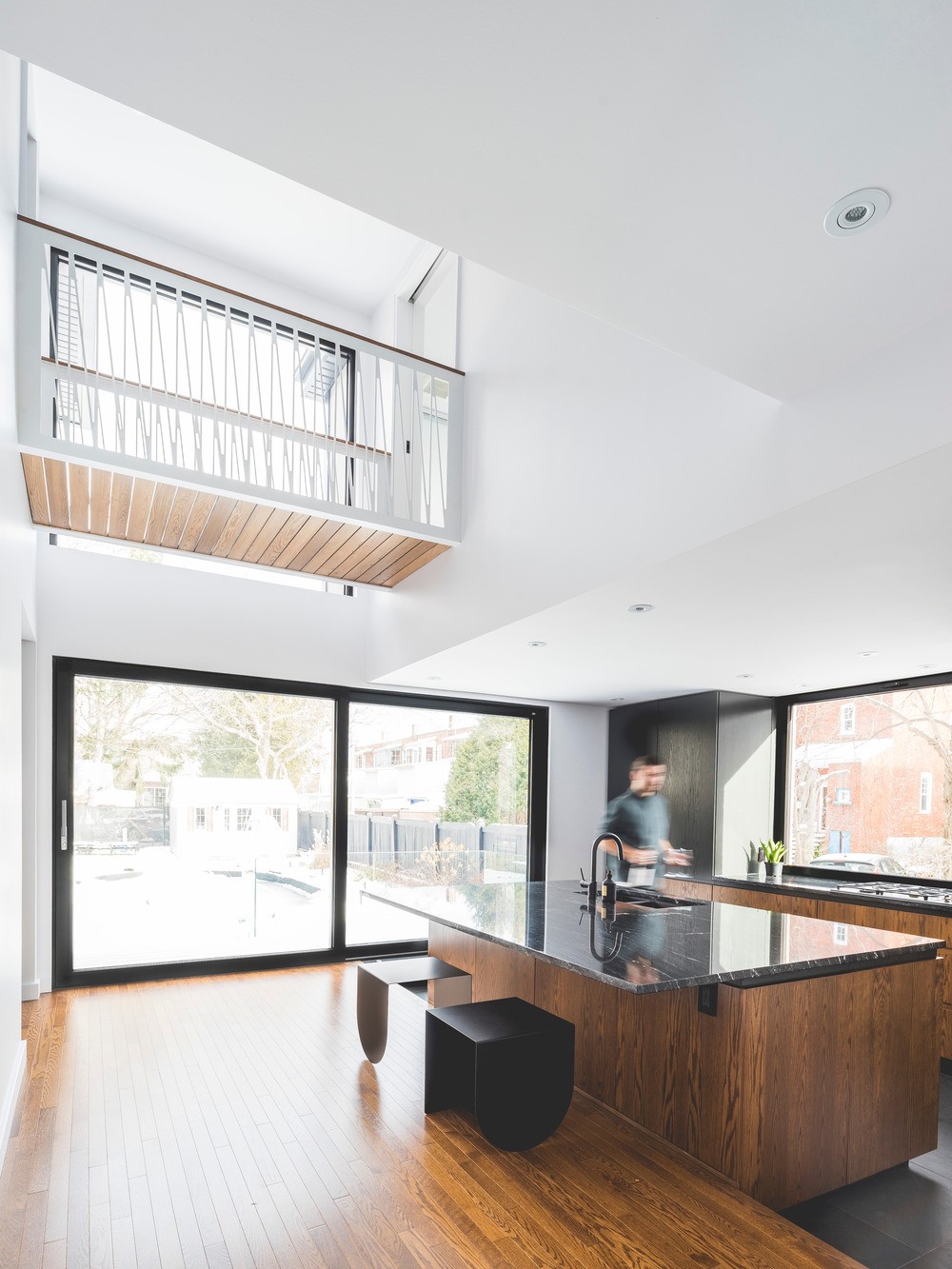 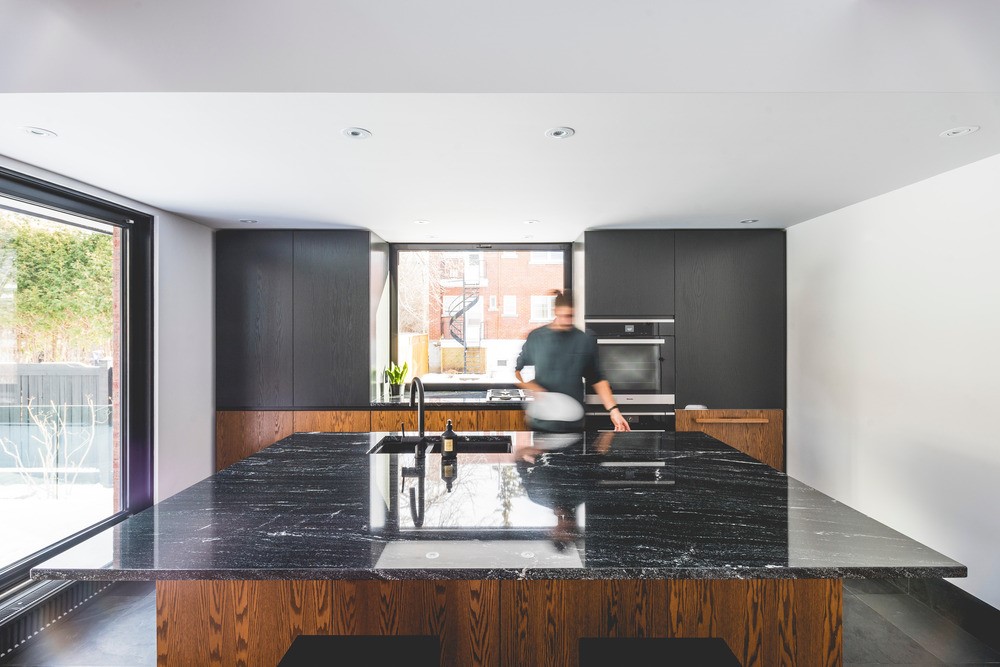 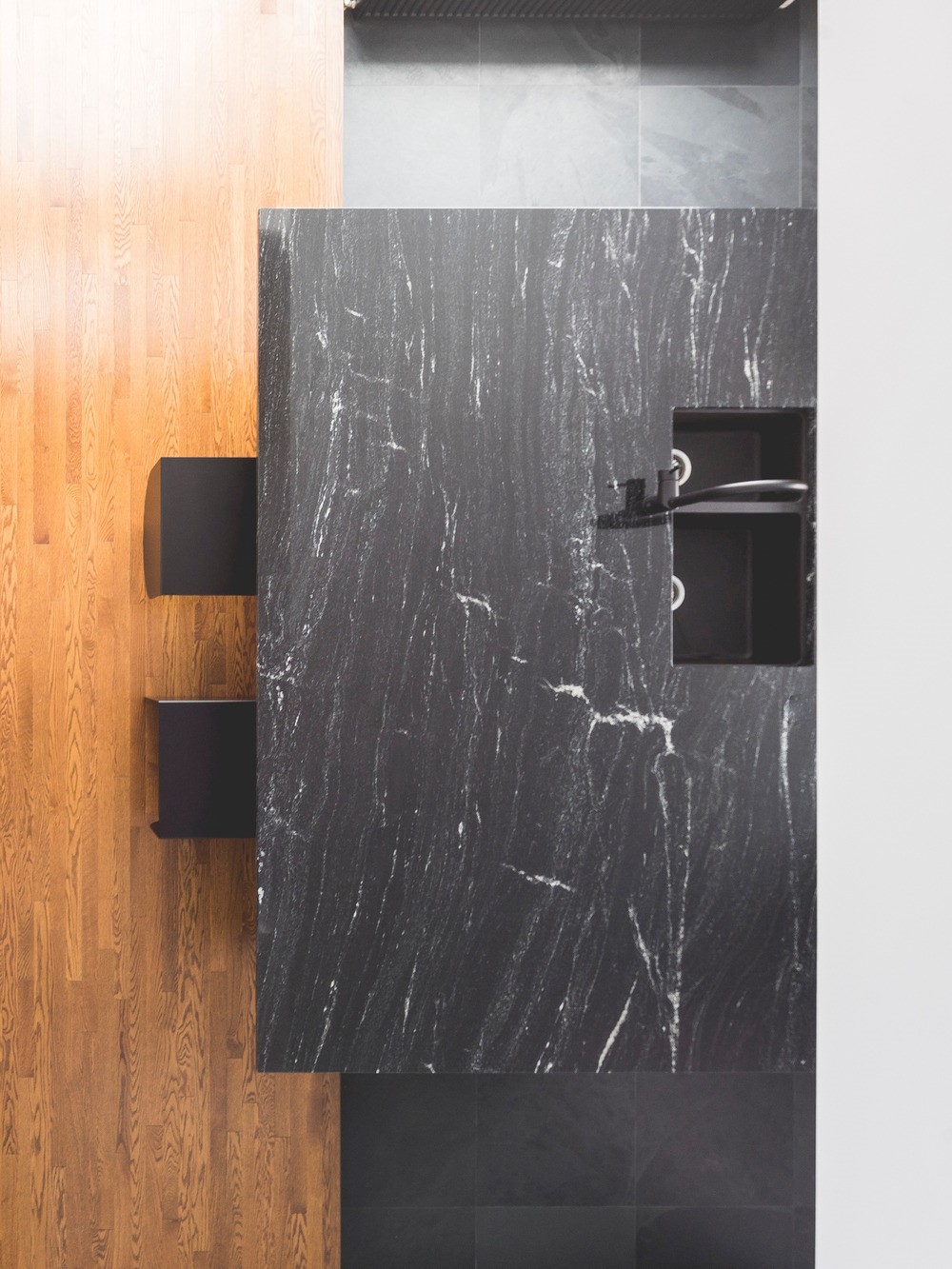 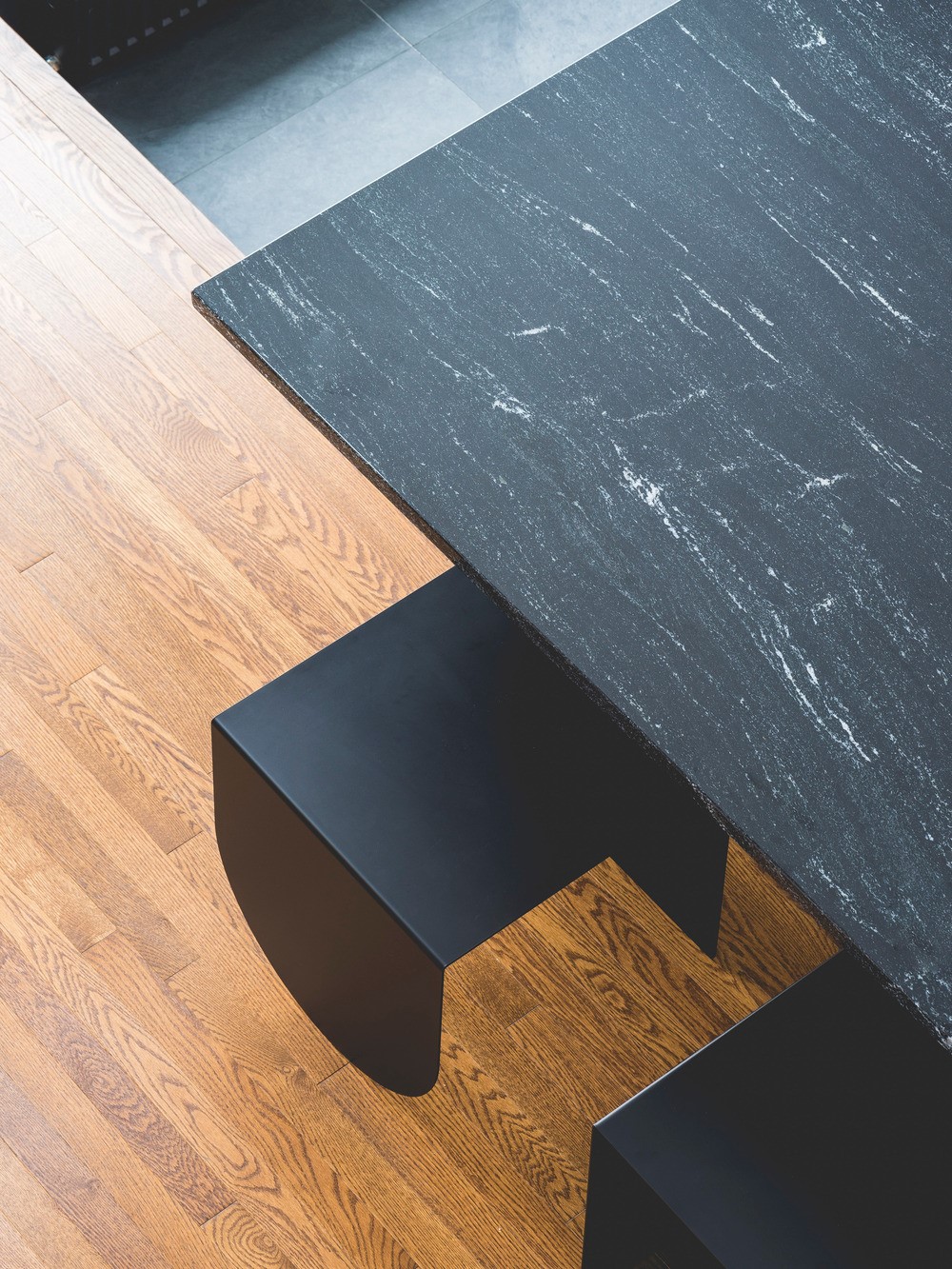 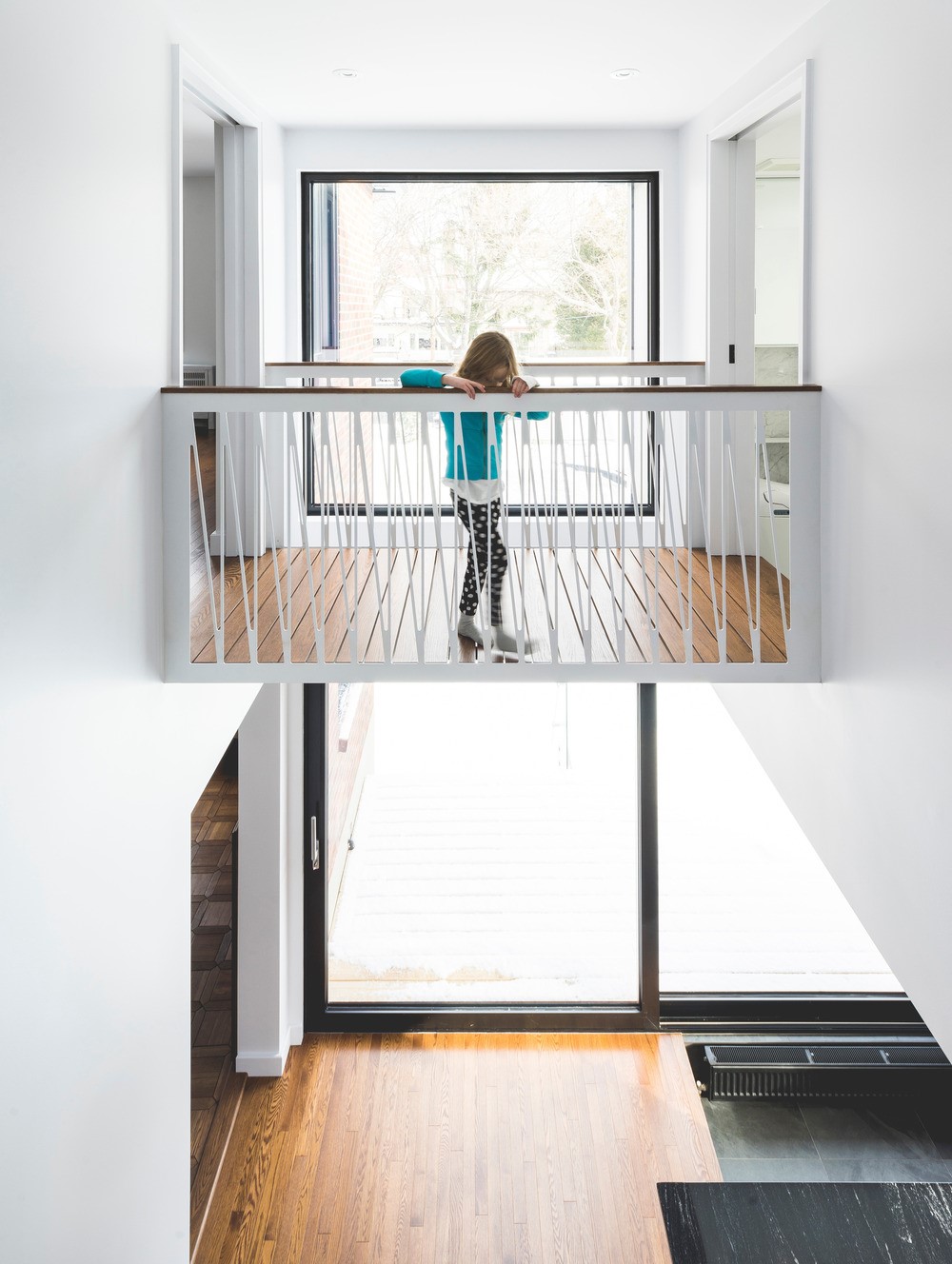 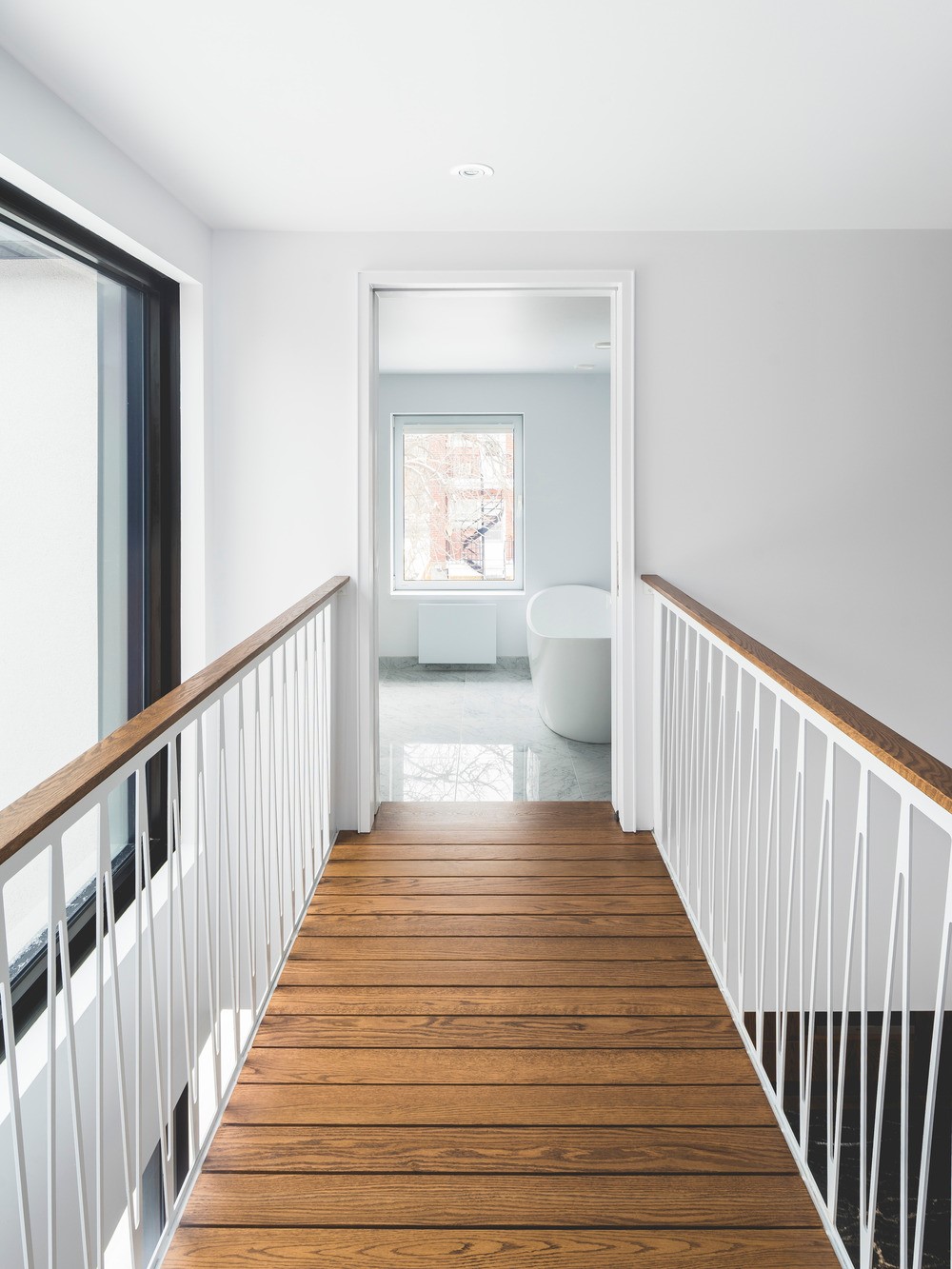 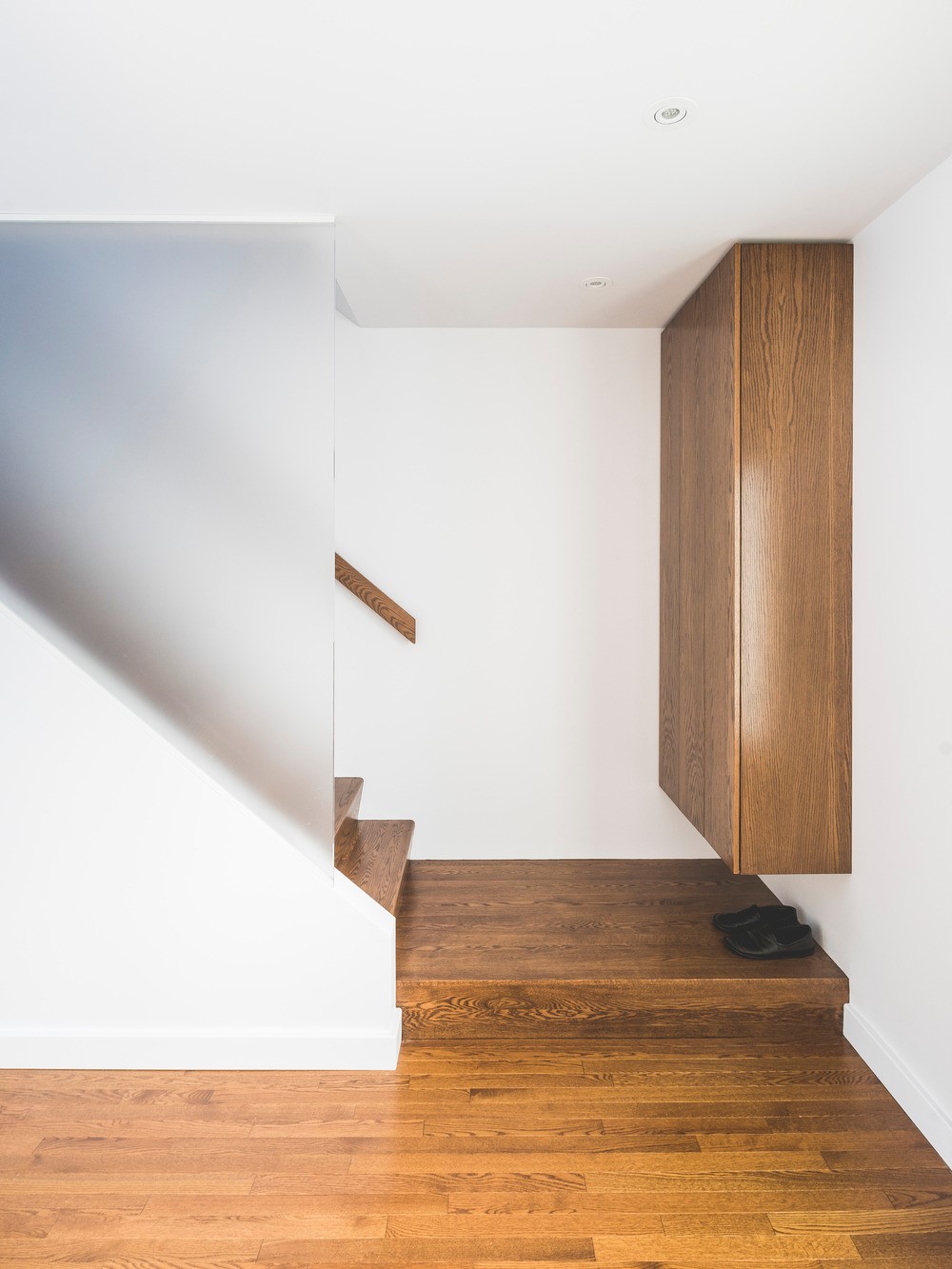 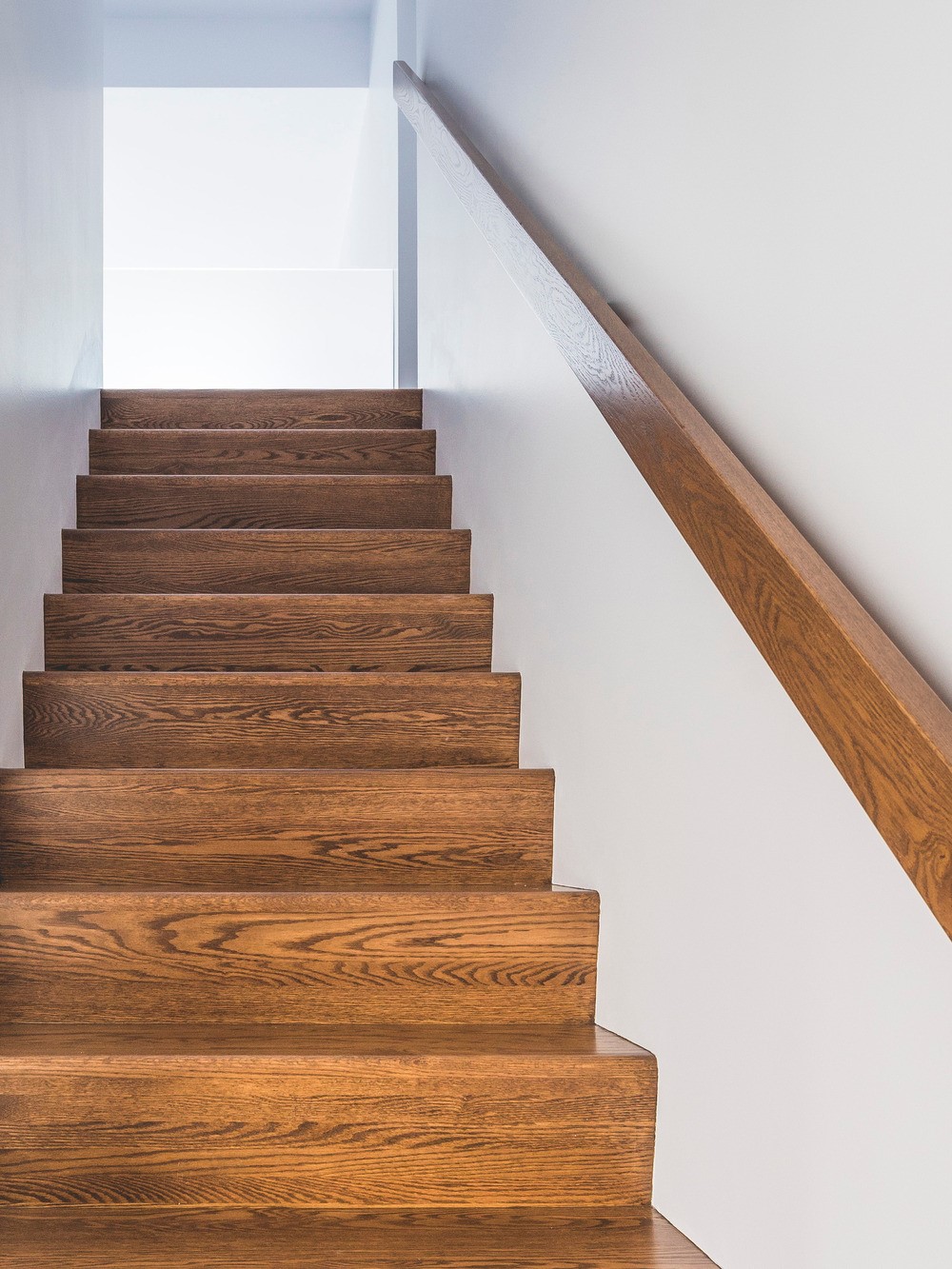 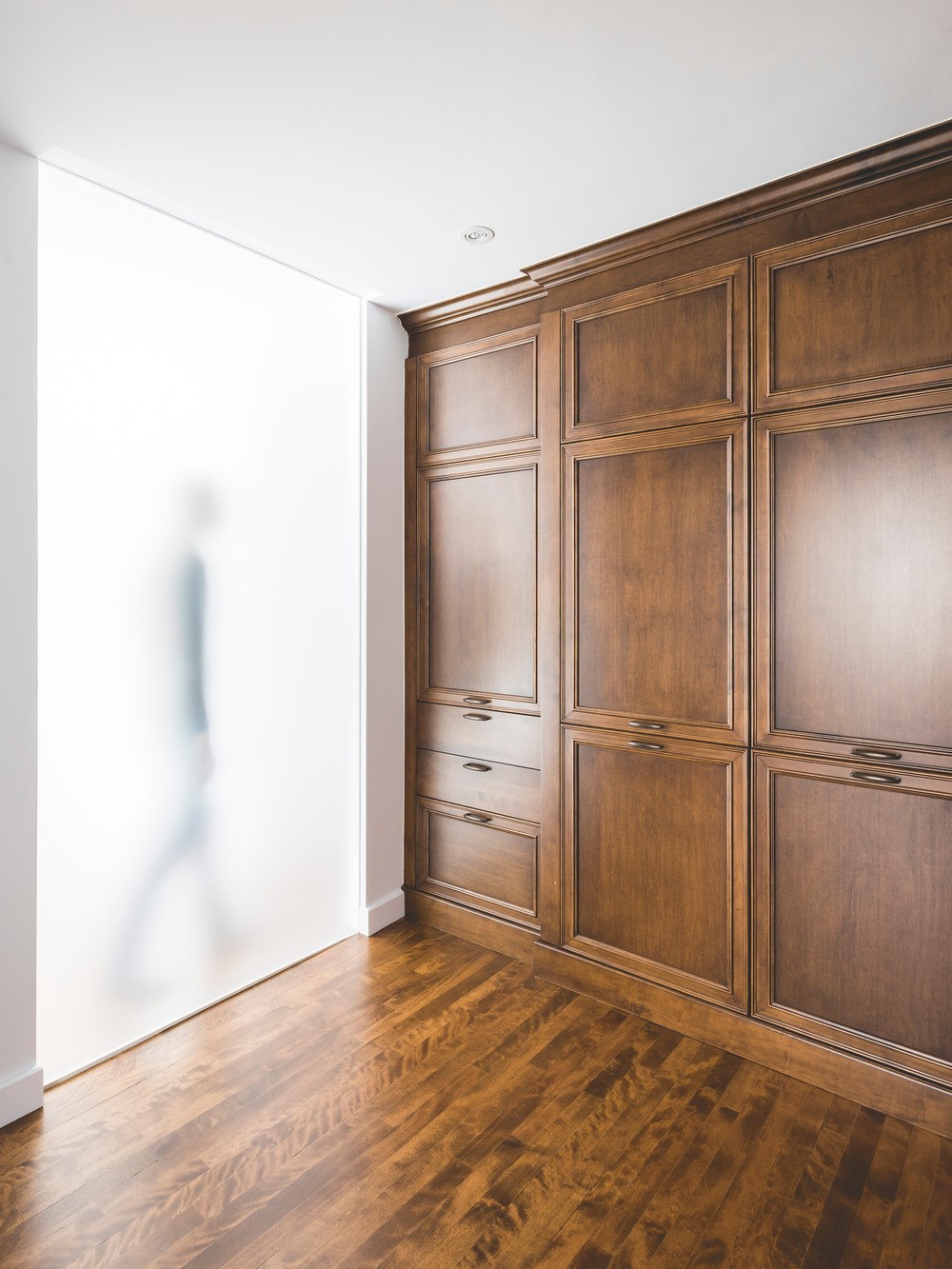 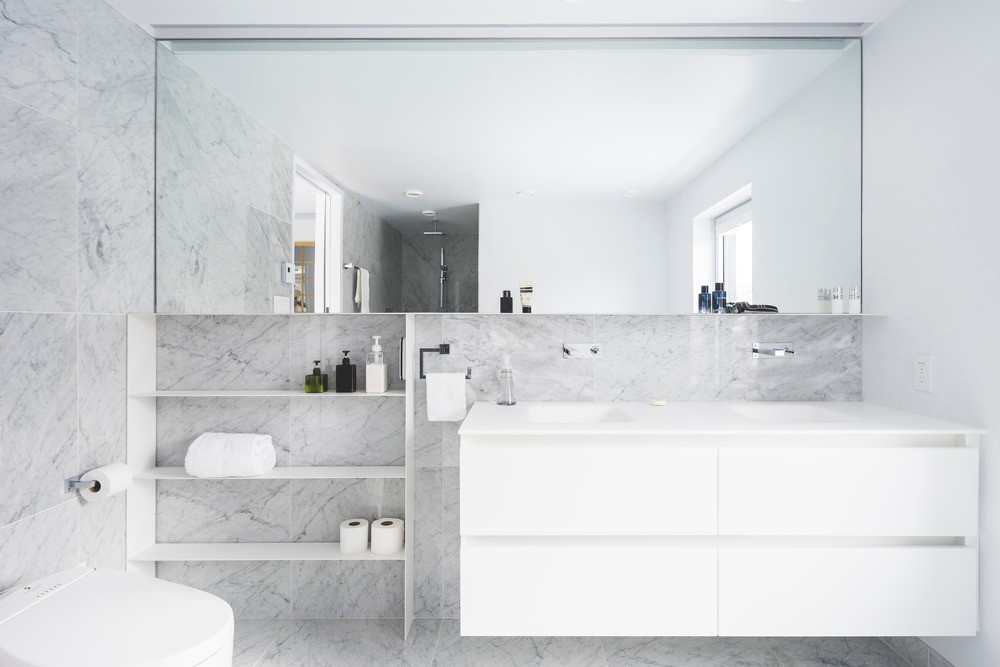 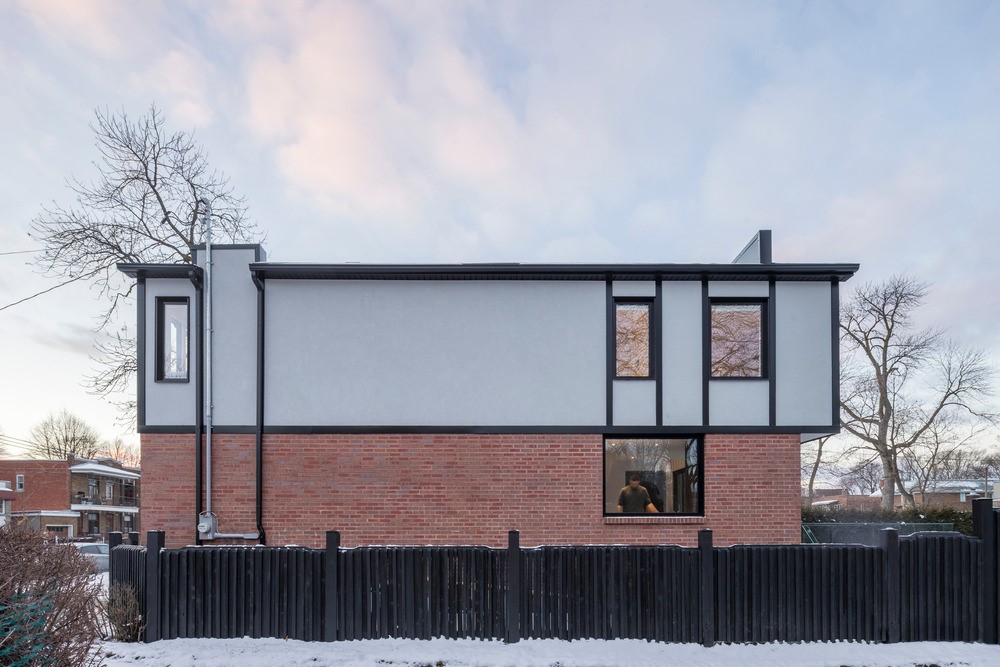 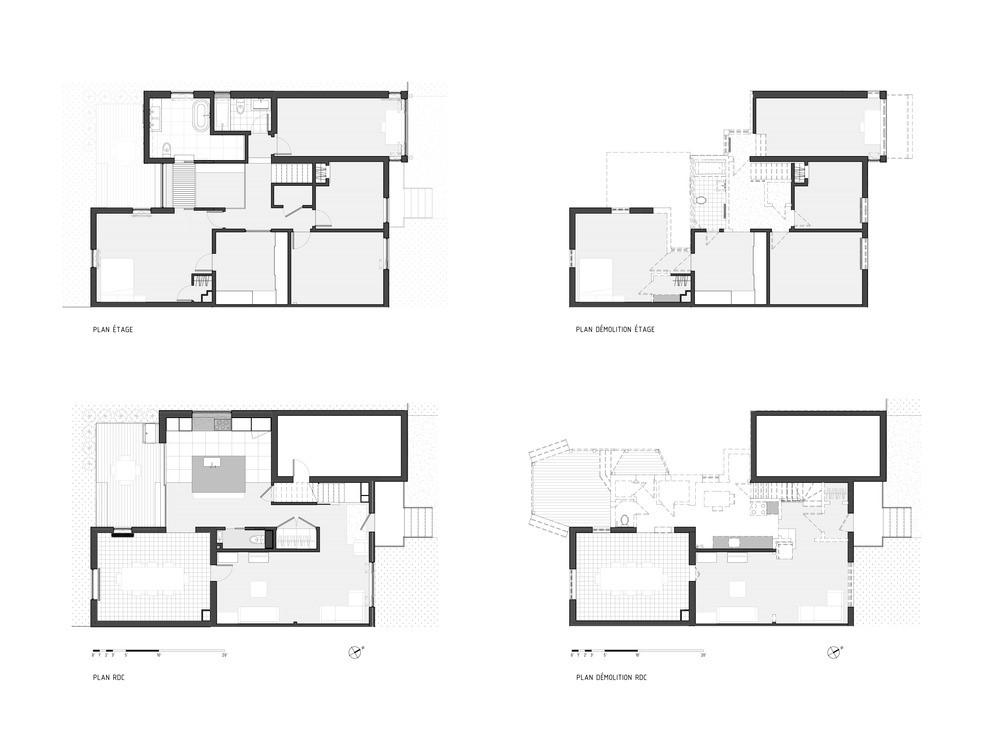 From the street, the existing façade is Tudor-inspired, with its wooden half‑timbering and plaster on the second floor. The classic pattern is most obvious above the garage on the gable wall. By extending this space towards the back, a connection is created between the two sides of the house. On the side façade, red clay brick wraps around the ground floor to the deck. The second floor picks up the half-timbering pattern, painted in contemporary colours. Striking a contrast with the light grey walls, black geometric lines frame the windows and come together at the back in a triangular gable pattern. The end of the long structure projects against the back wall, with its black sheet-metal cladding and abundant windows exposing the open-plan living spaces inside. At its foot, the new back deck extends the kitchen by way of a large raised glass door.

Inside, the living spaces are open-plan. By strategically removing certain partitions, the ground‑floor layout opens the heart of the house onto the backyard. Right in the middle of the opened space, the large kitchen island reveals a change in level that offers a standing workstation on one side and a few seats on the other. In its extension, the double height maximizes natural light. Above, a narrow walkway connects the master bedroom to its bathroom, providing a spectacular top view into the yard on one side and the living area below on the other. With its steel Vierendeel railing and thin wood board floor, it looks and feels like a suspended footbridge.

In contrast with the unique exterior, the interior of the house is decorated with elegant simplicity. In the light-bathed kitchen, the slate floor and black marble countertop set a classic but contemporary tone. Throughout the house, frosted glass, light grey marble, and white painted drywall make for a cool but very striking palette. Preserved in its original state, the stained red oak panelling in the dining room inspired the choice of finishes for all the floors and built-in cabinetwork.

This transformation is proof that the reinterpretation of an old architectural style can be an inspirational starting point for harmoniously integrated contemporary architecture. Classic compositions can be reimagined to recreate new effects that honour the past. The integration of existing spaces, the use of old materials or even the transposition of characteristic features offers countless opportunities for immersion into an aging urban heritage. But, never mind that—Cardinal Street has finally taken a breath of fresh air!