This summer house designed by by SAOTA is set on the banks of Lake Huron in a small, remote Canadian town about an hour’s drive from London, Ontario. While the architectural context might be characterised as somewhat conservative “cabin country”, this house attempts to extend the possibilities of the traditional lakeside family retreat through a contemporary architectural approach, harnessing recent developments in design, technology and sustainability to connect meaningfully with its beautiful natural setting while exploring new ways of enhancing the lifestyle experience of the family summer getaway. Photography by Adam Letch. 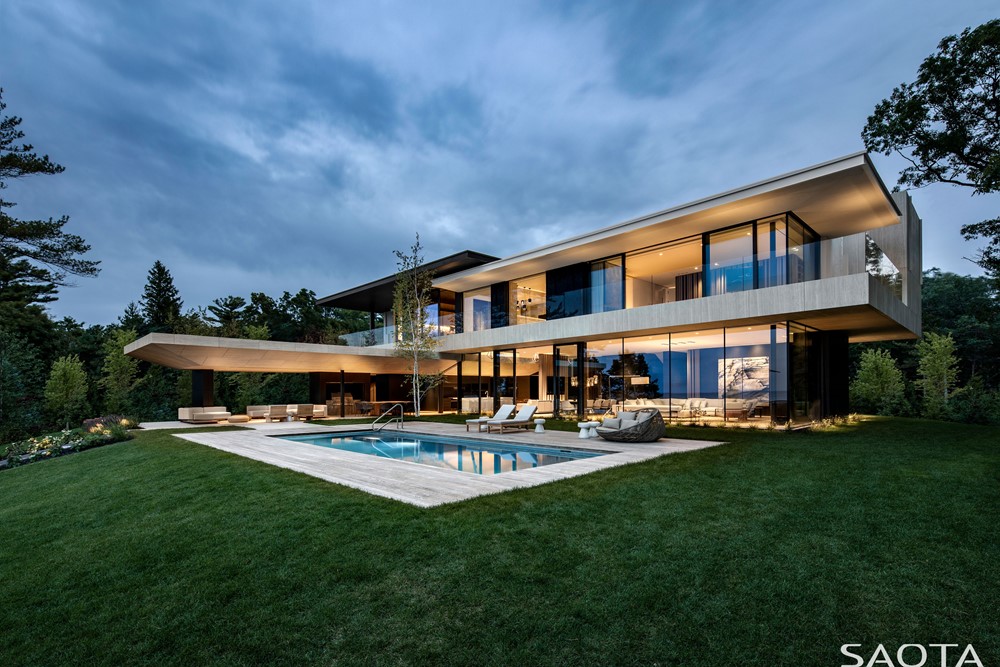 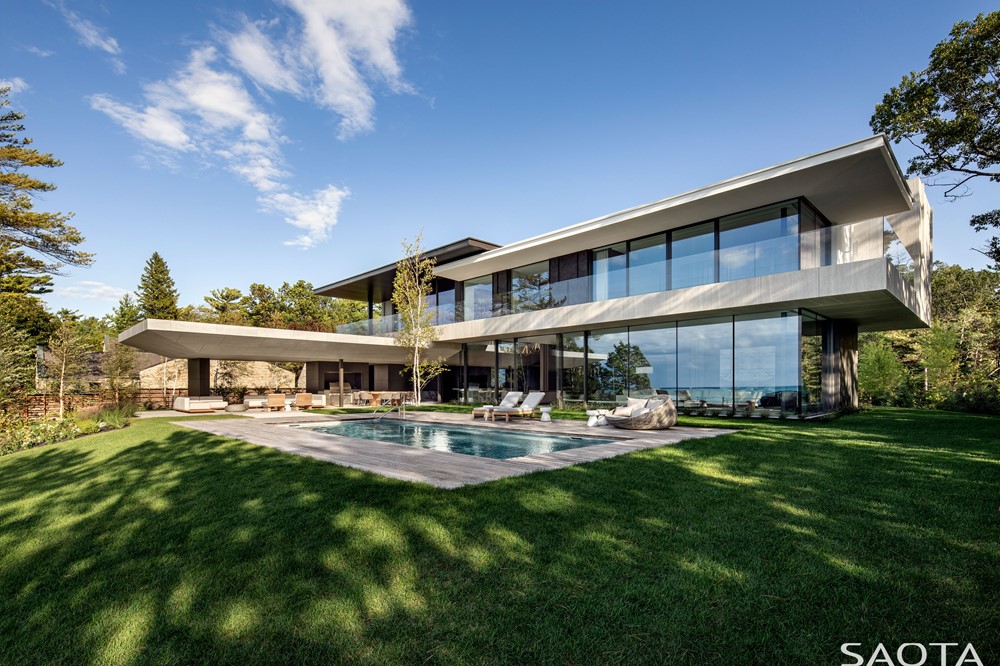 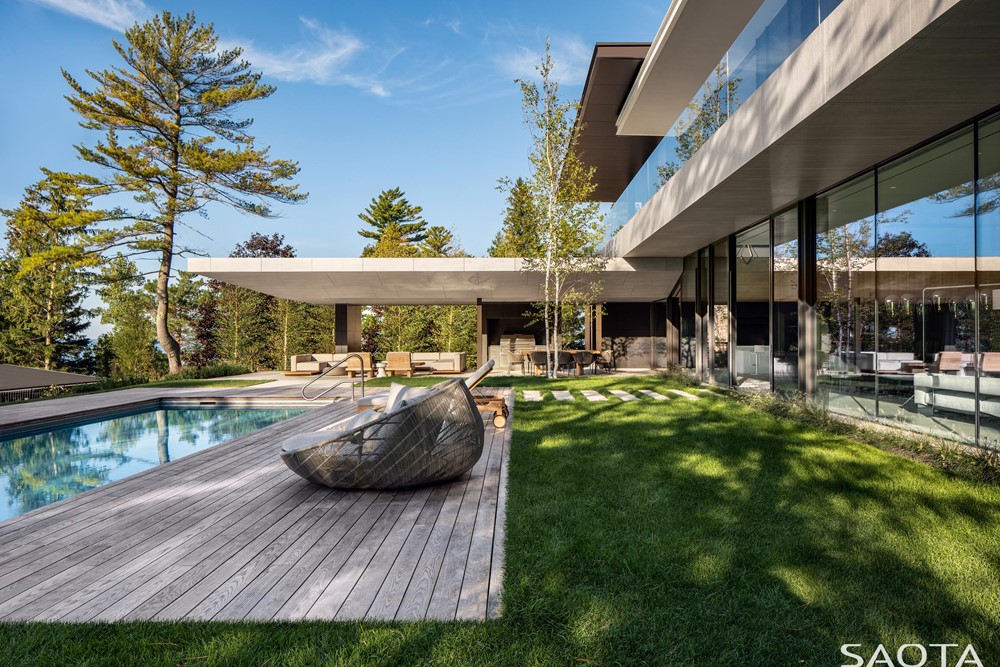 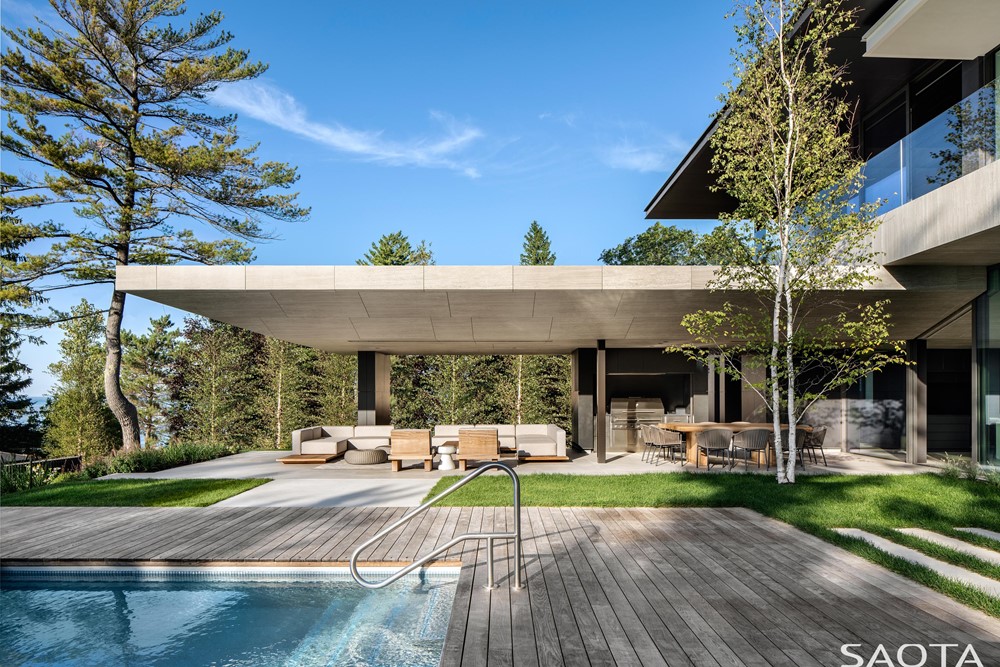 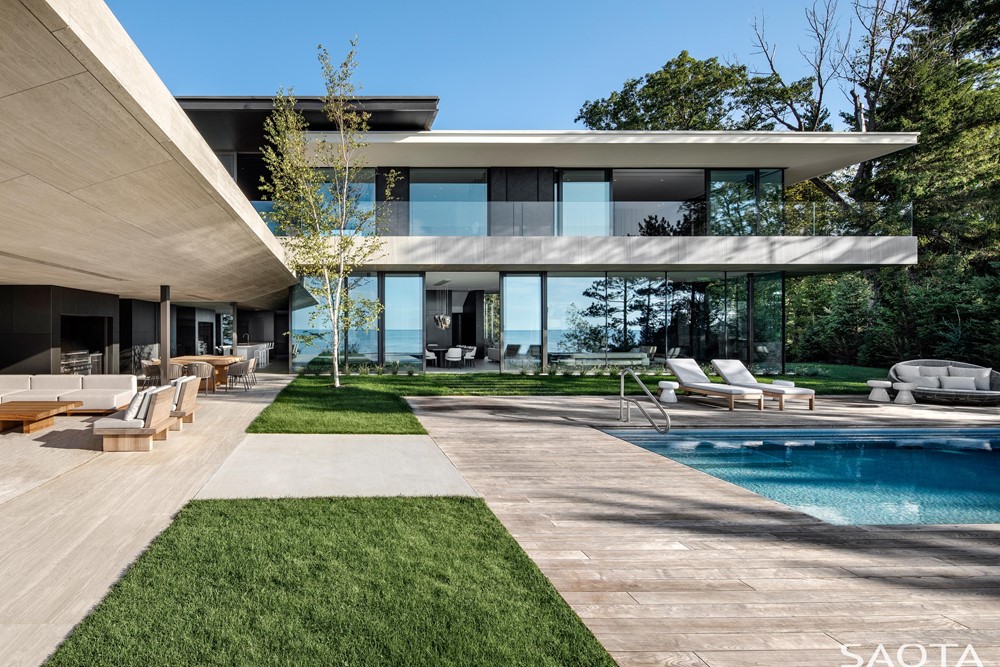 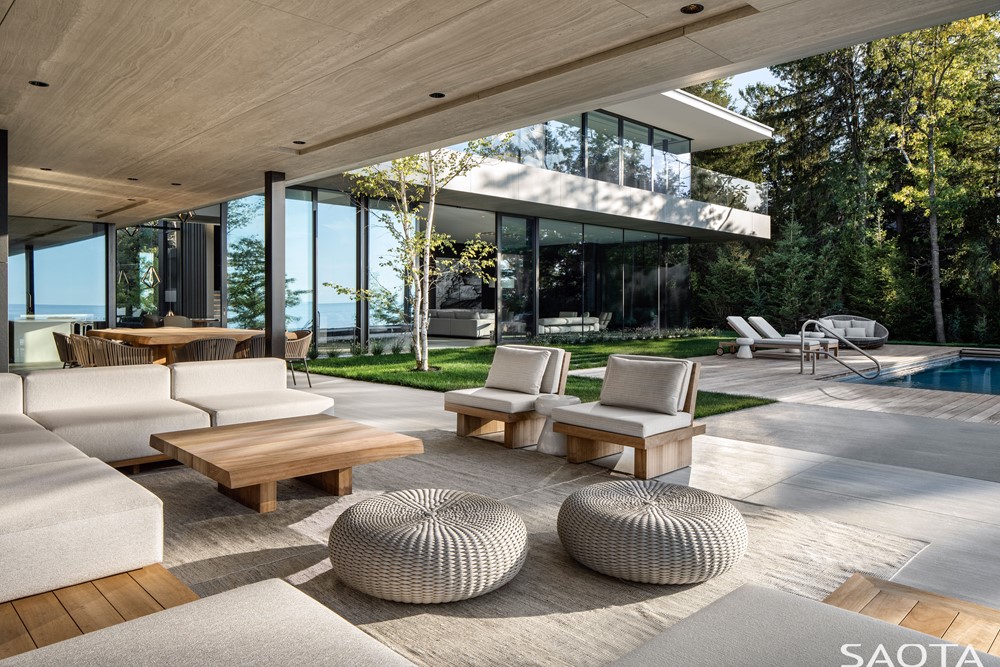 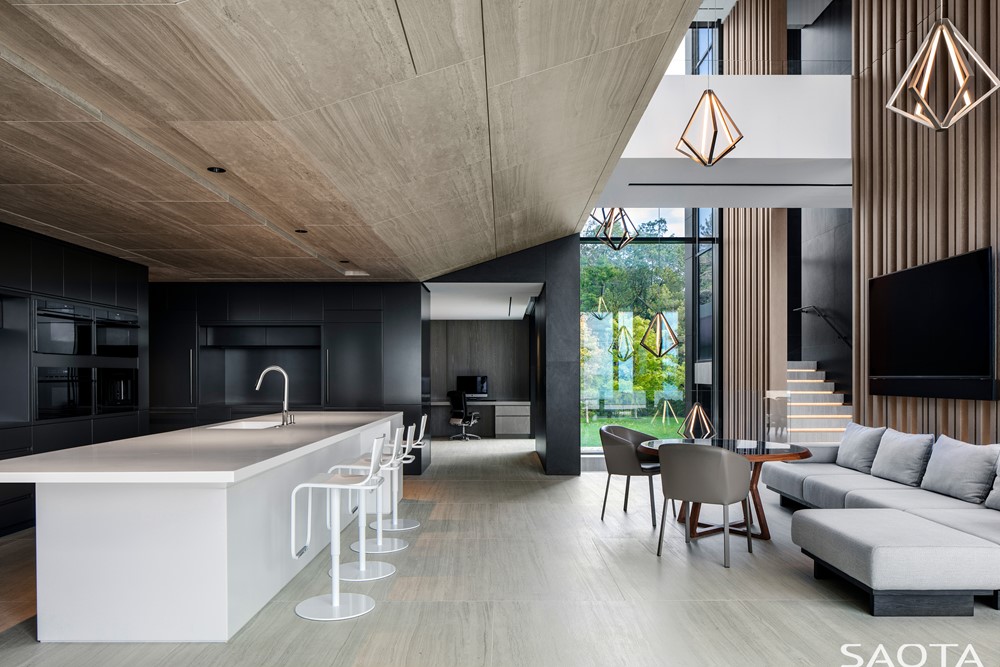 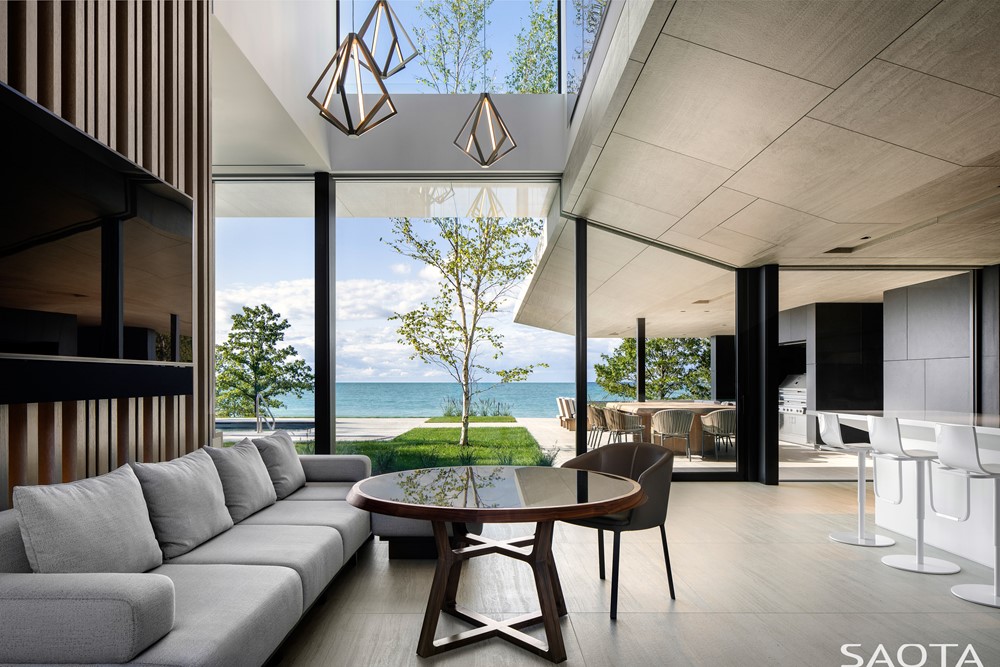 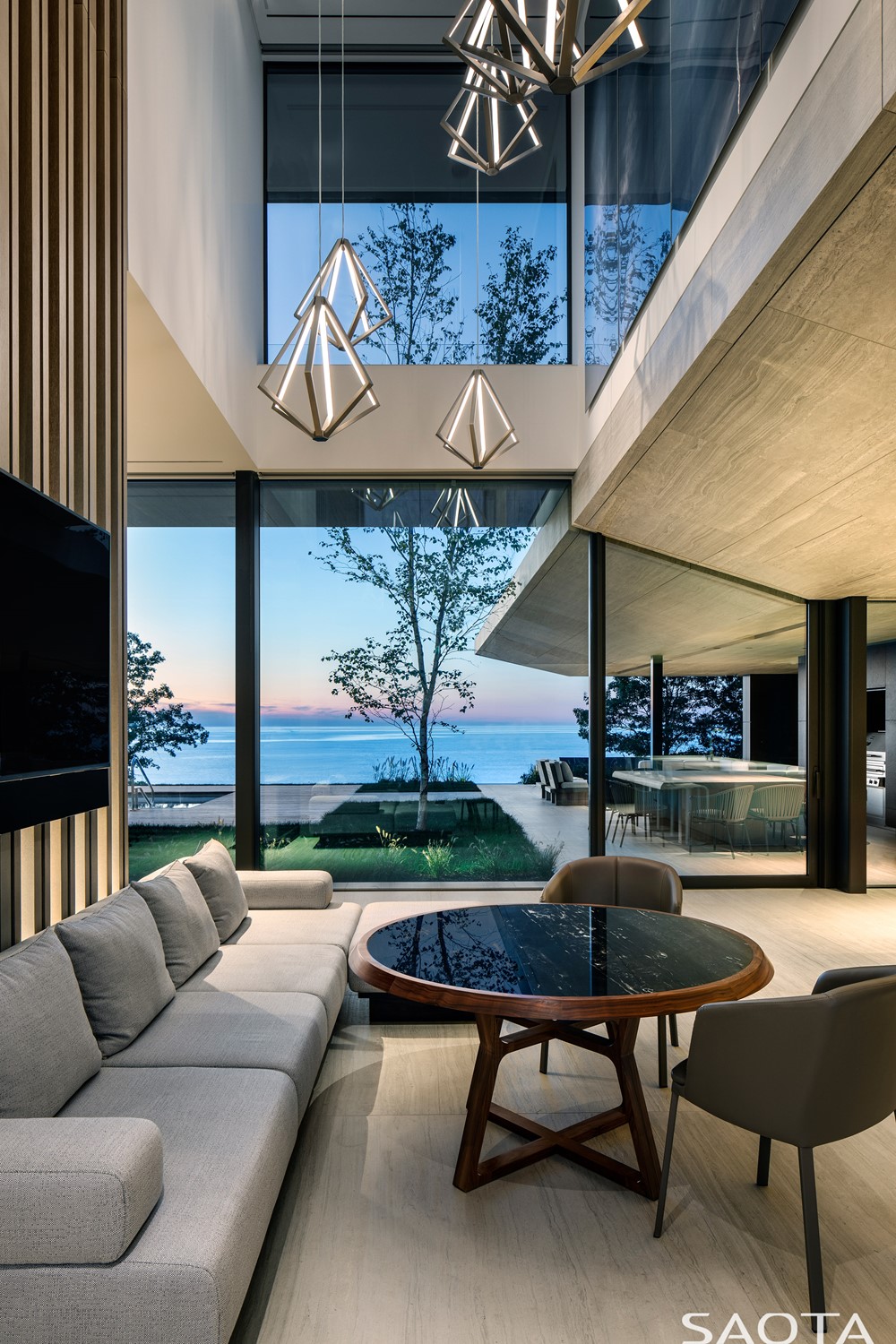 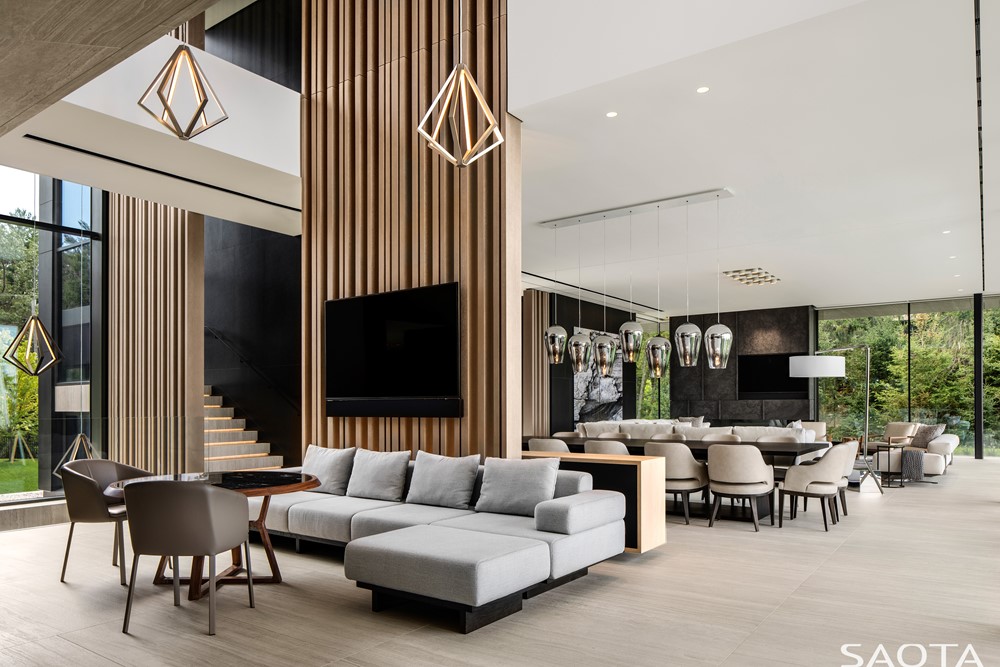 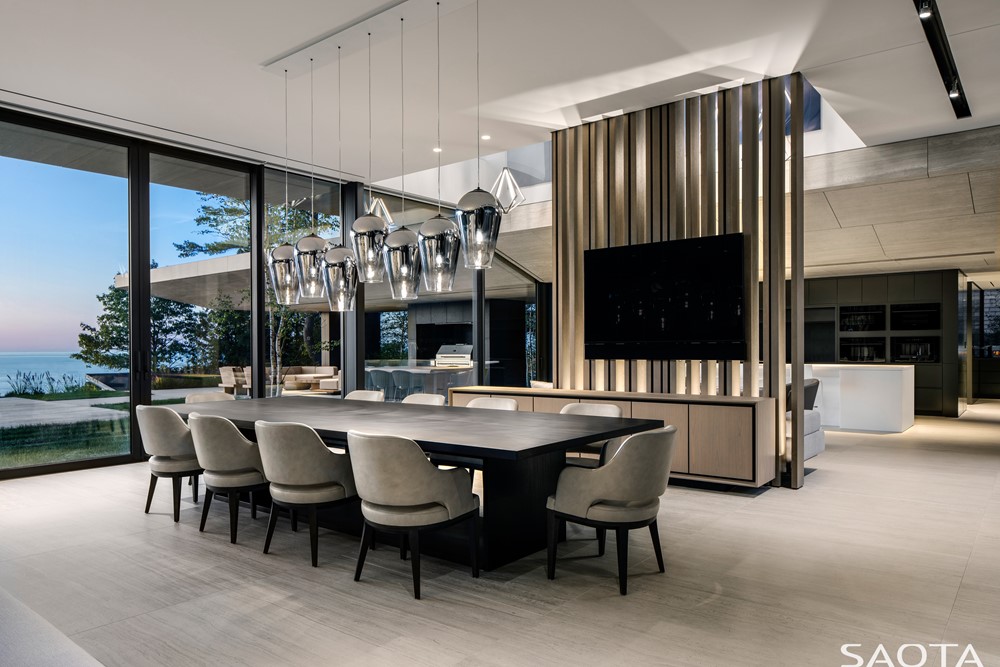 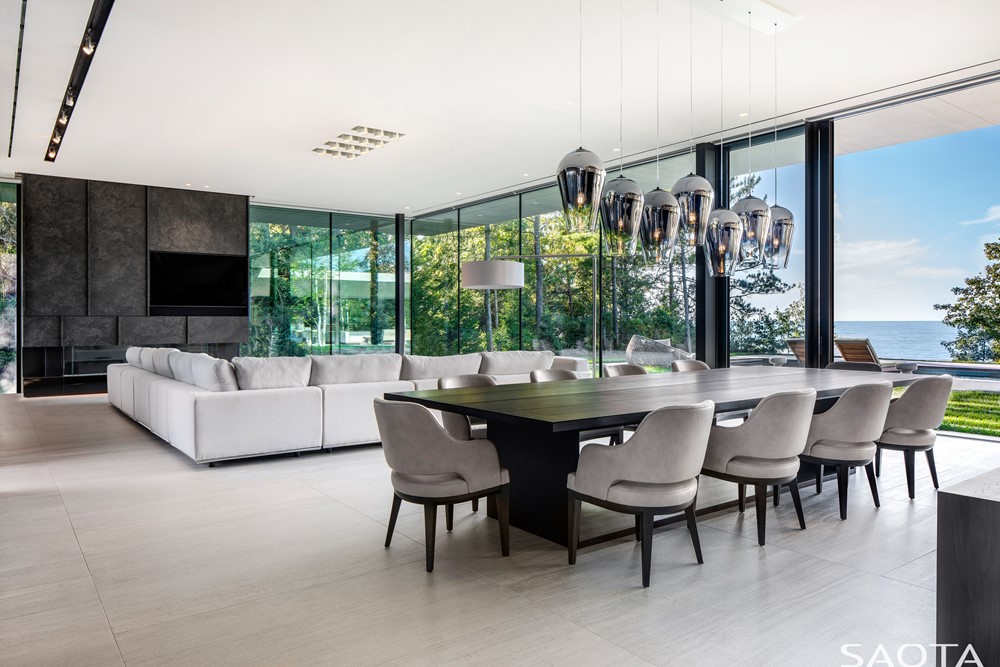 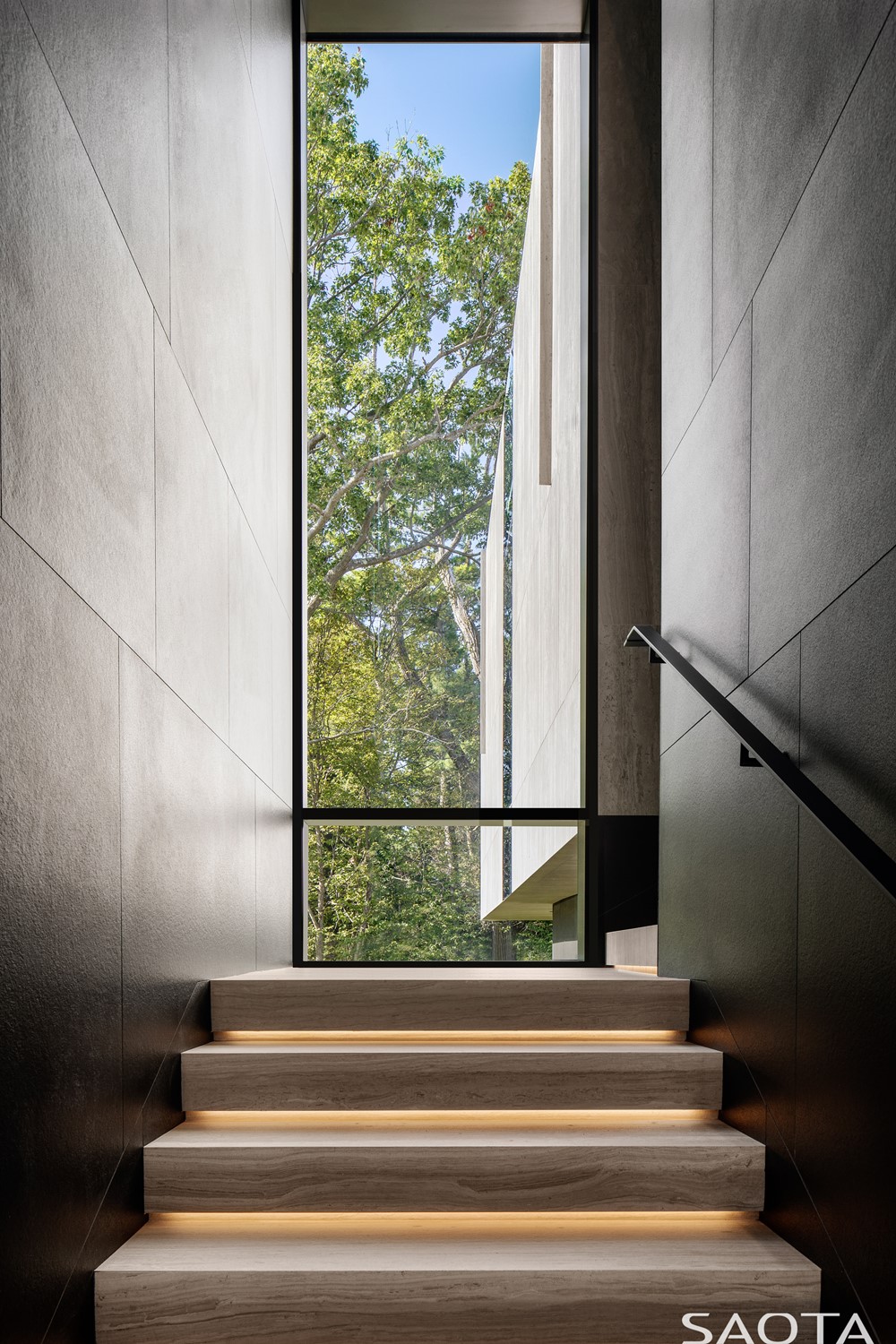 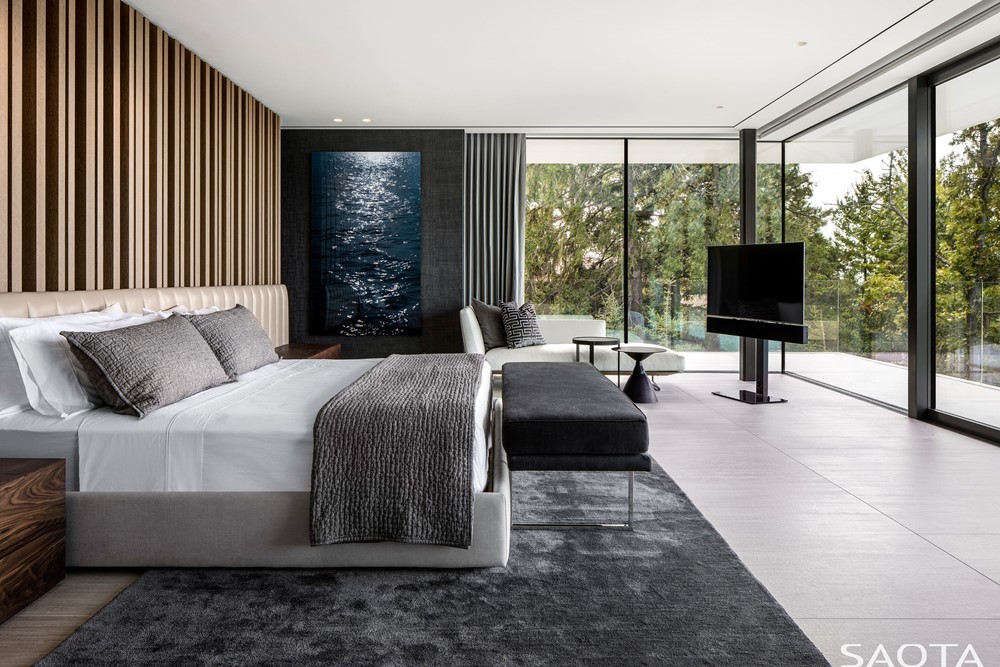 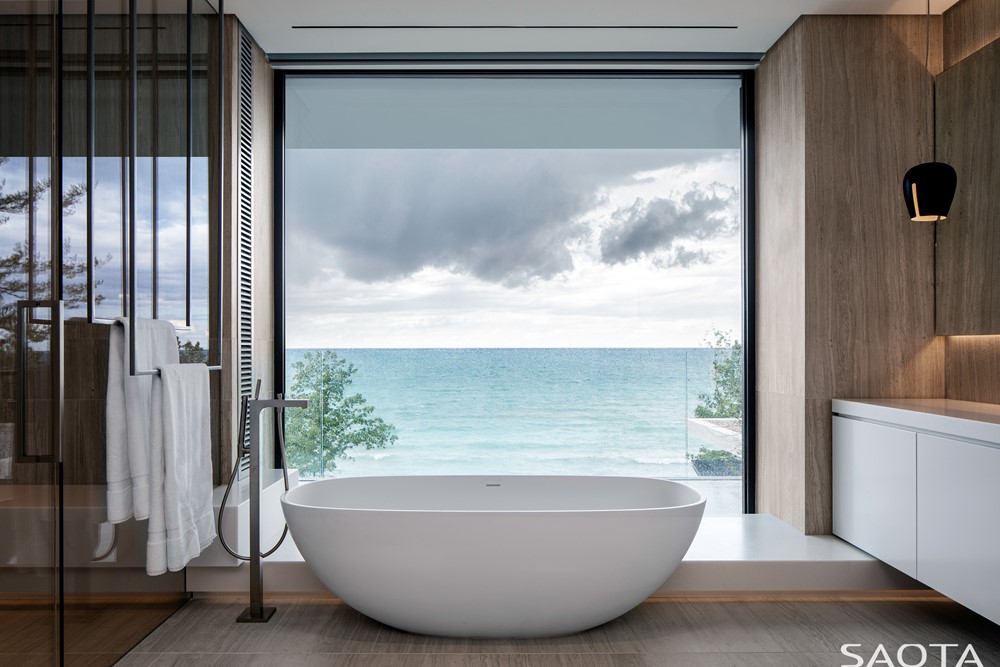 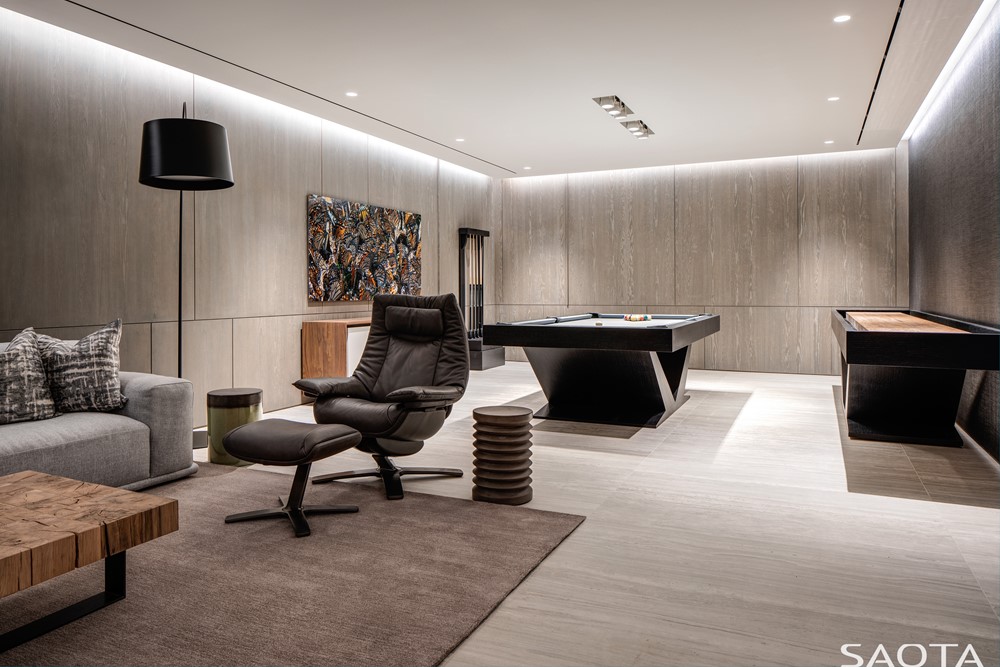 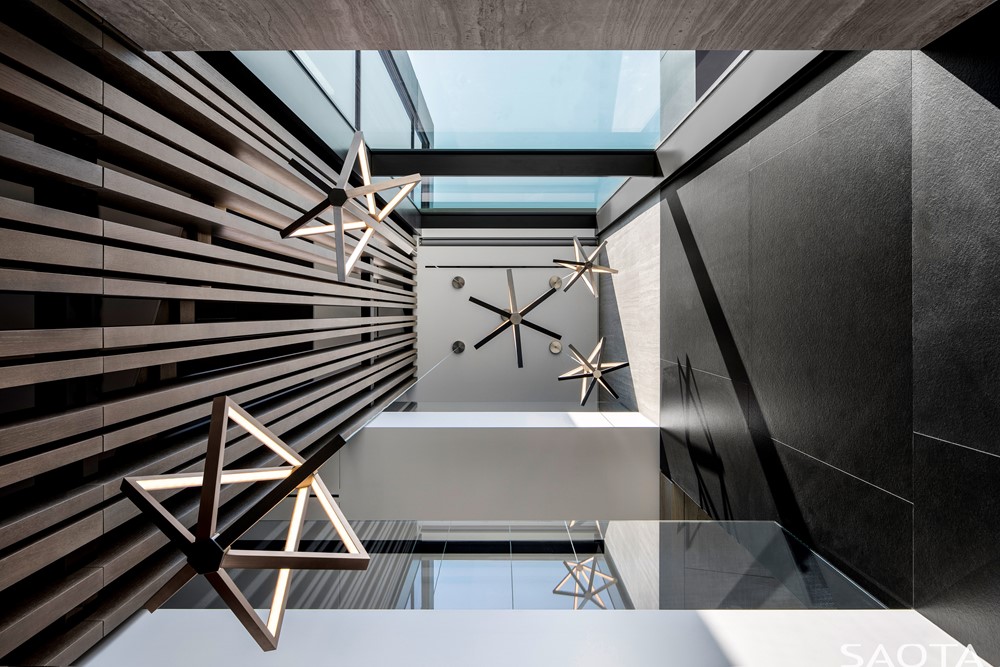 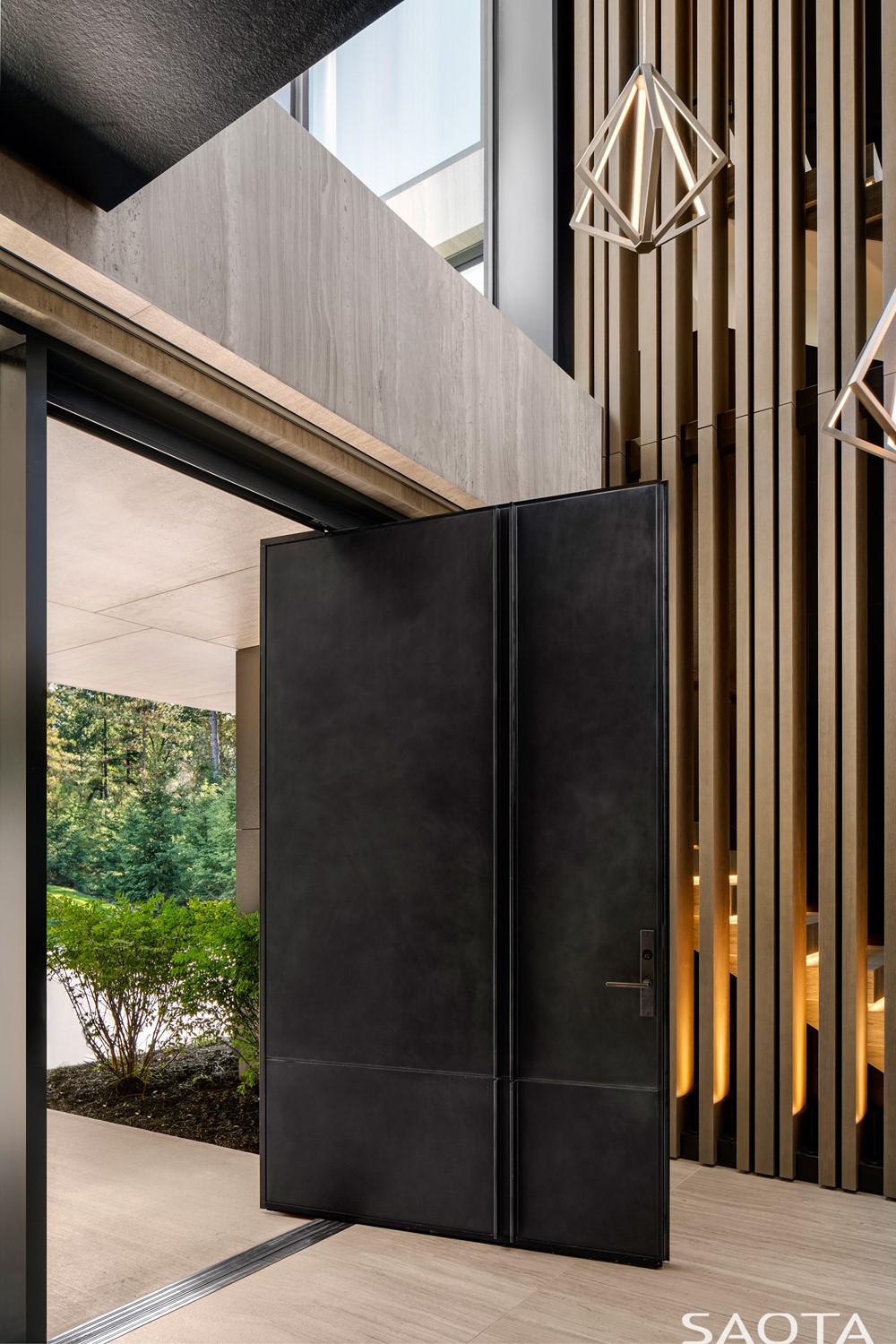 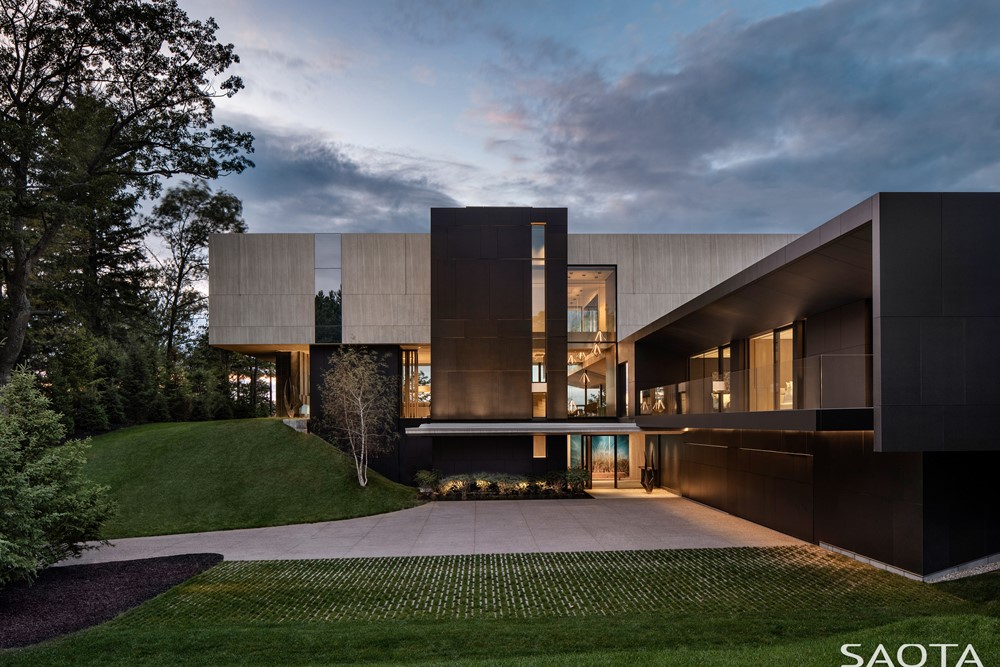 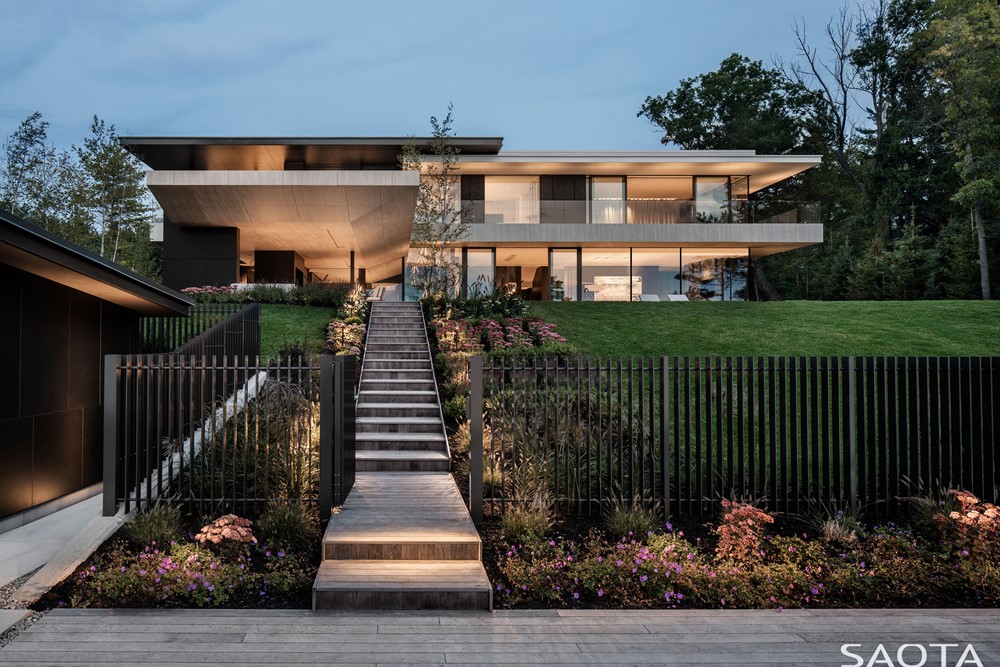 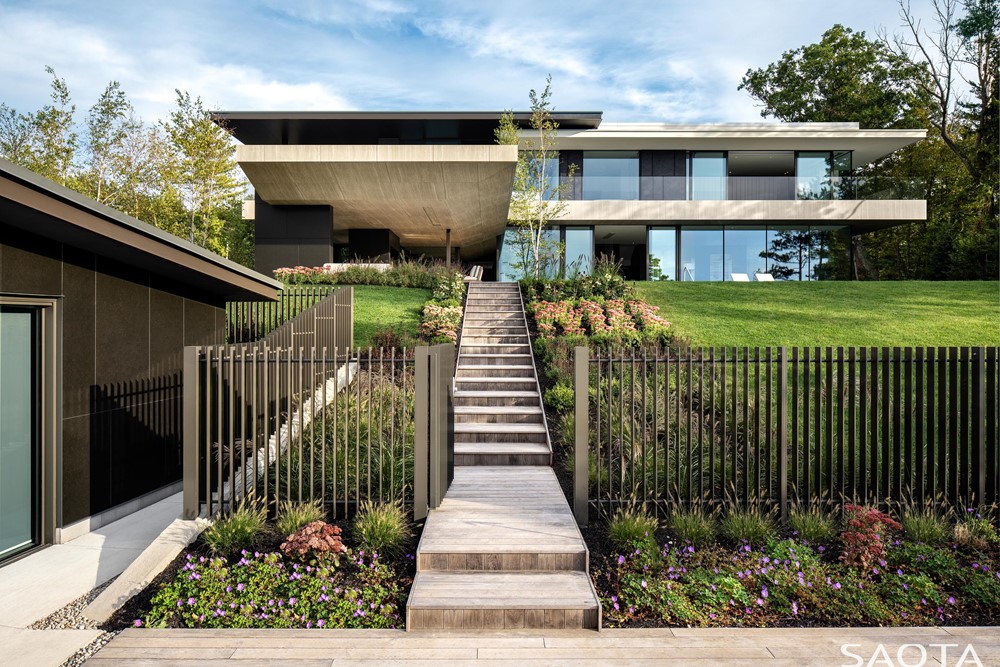 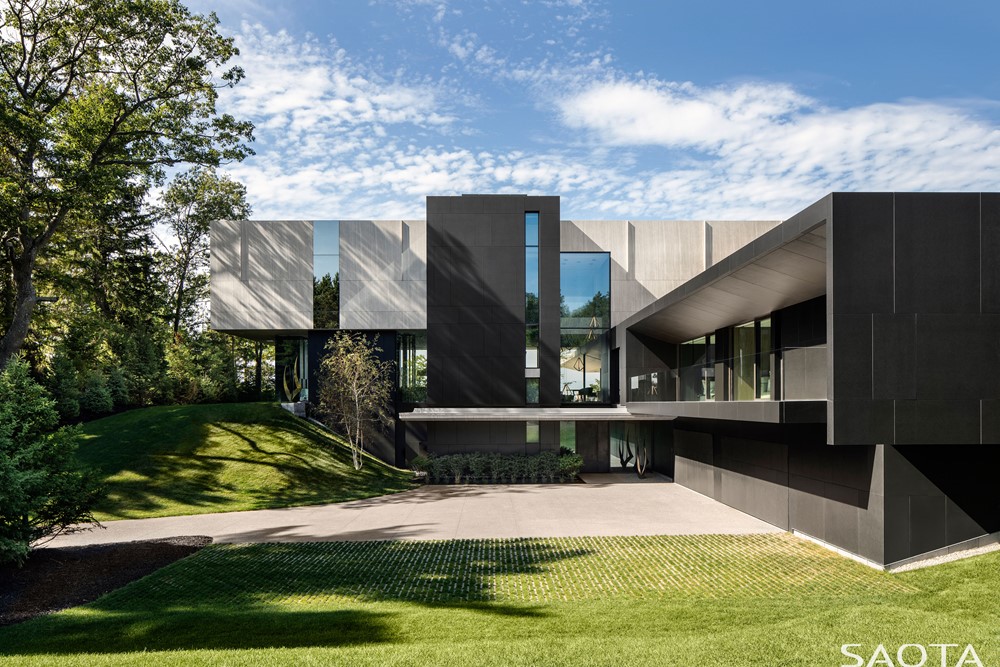 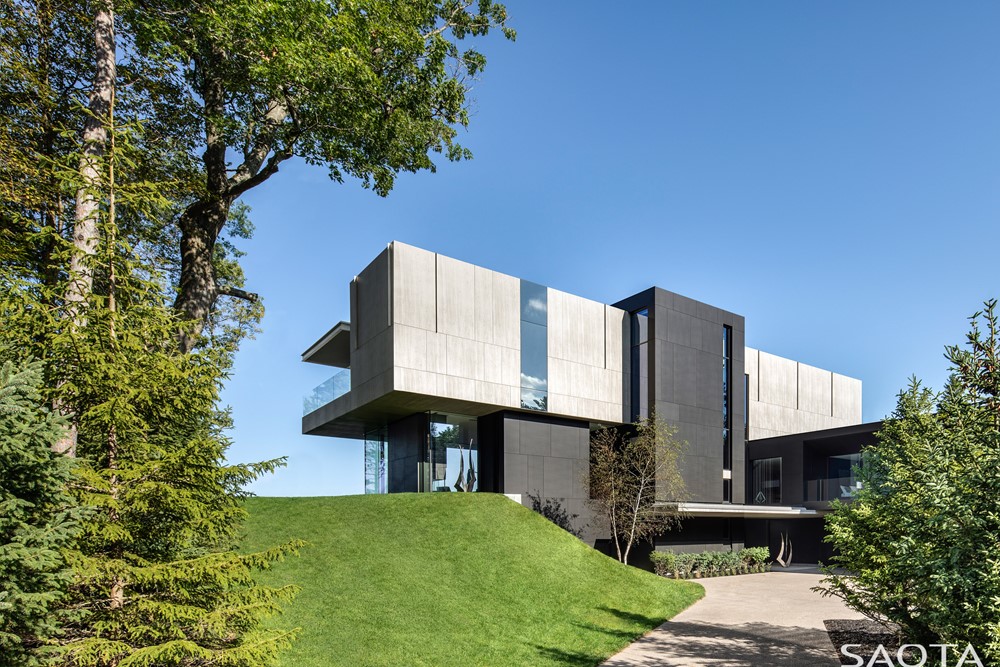 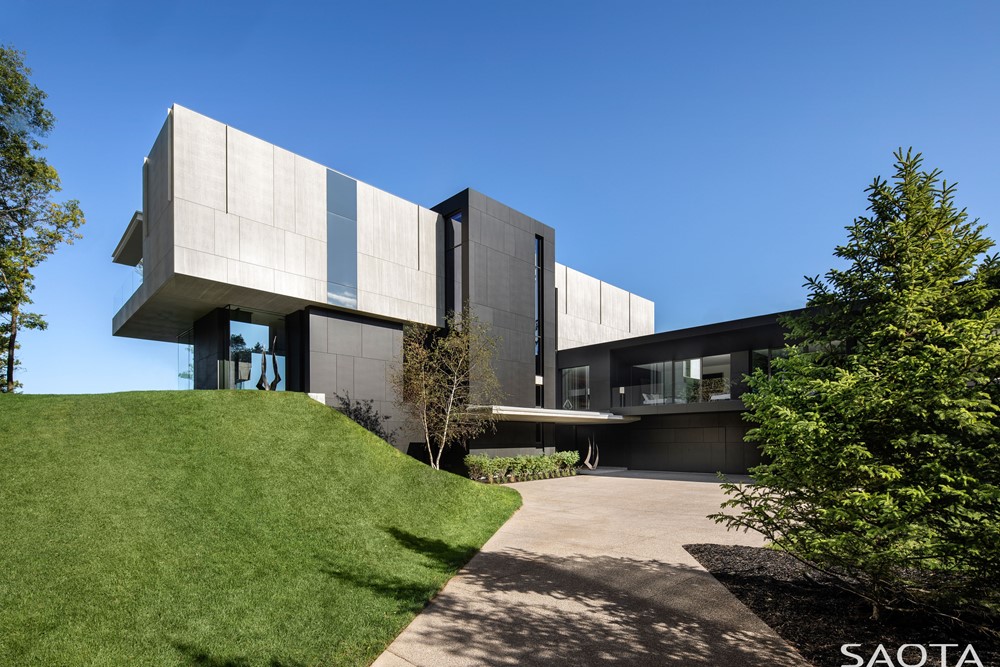 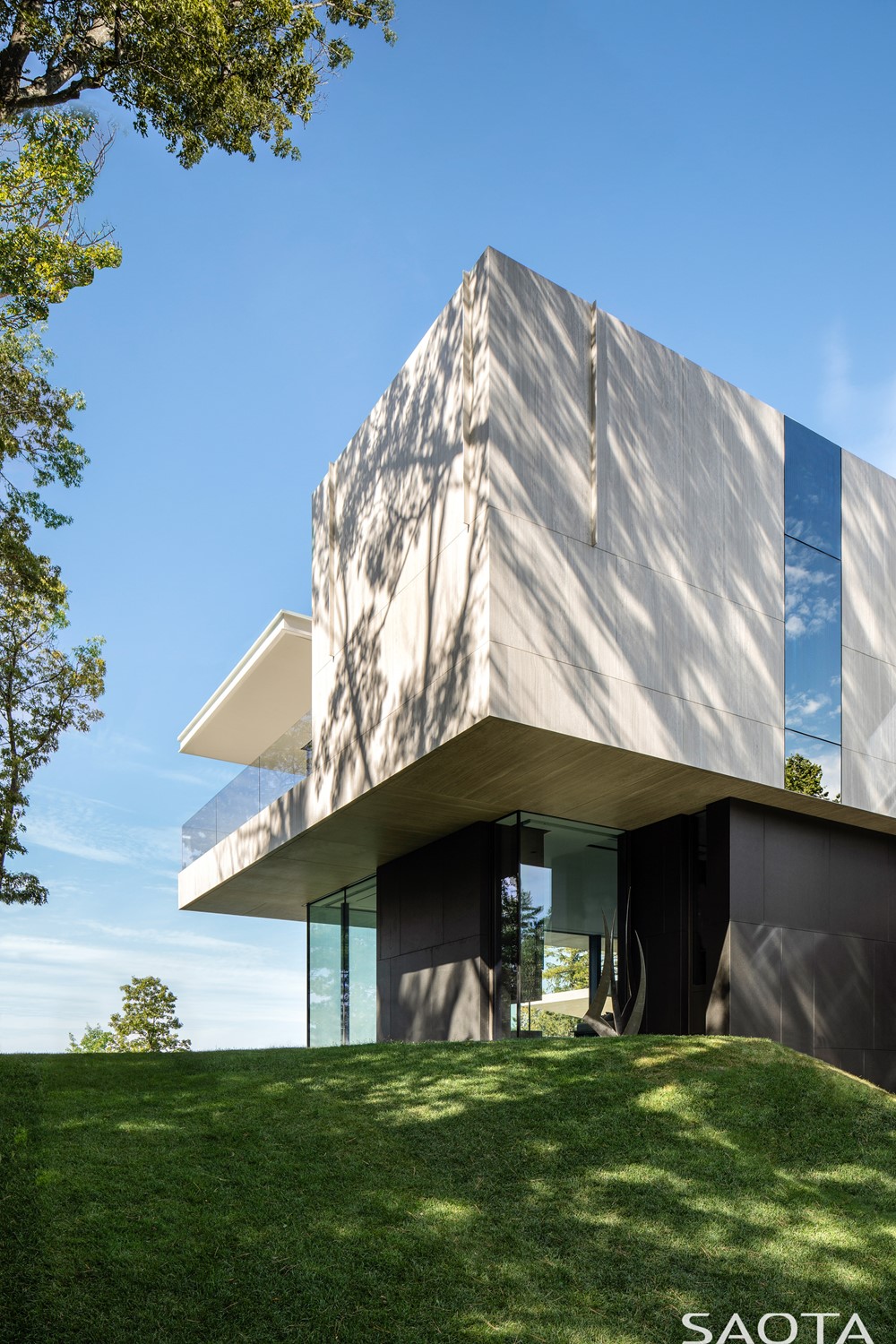 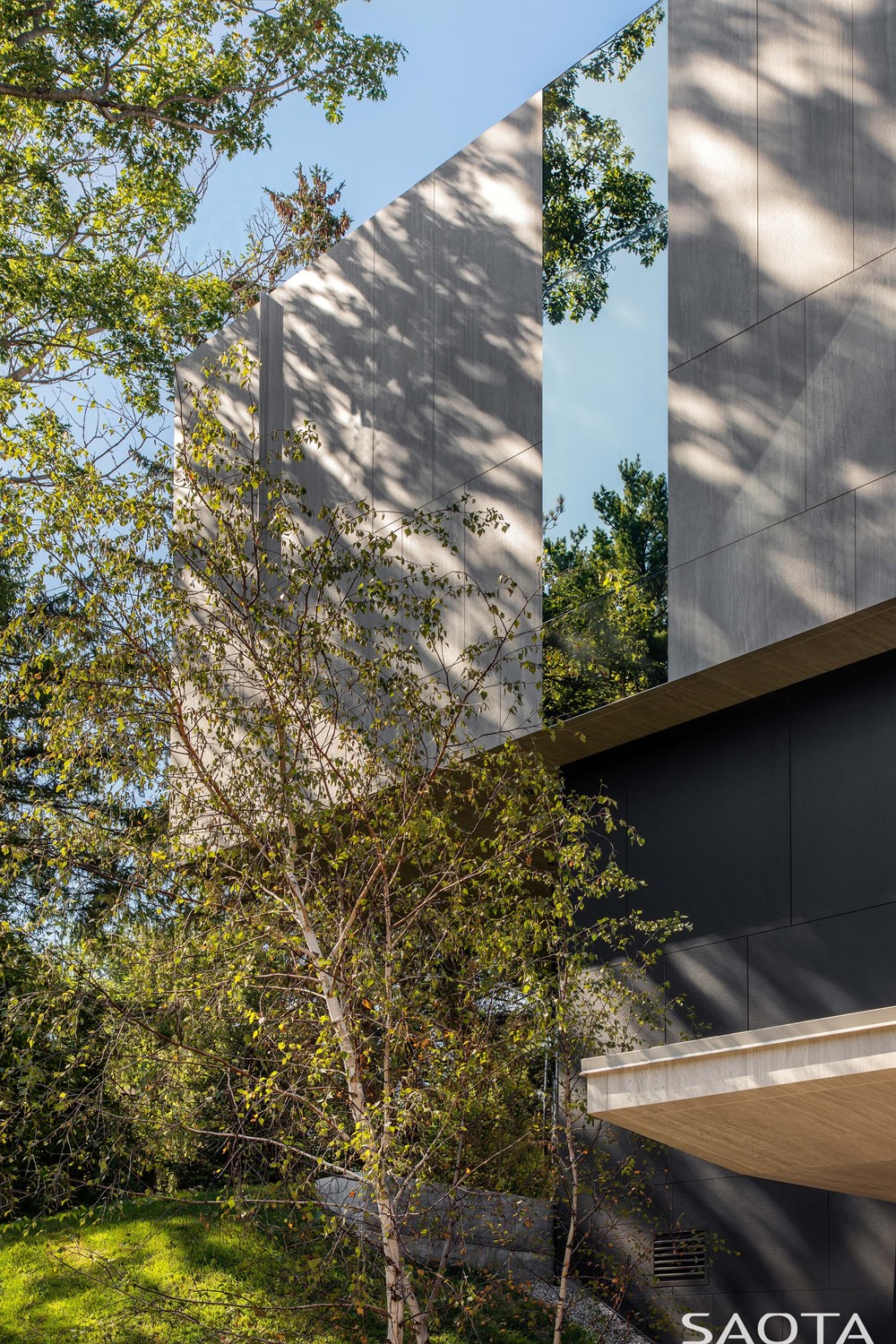 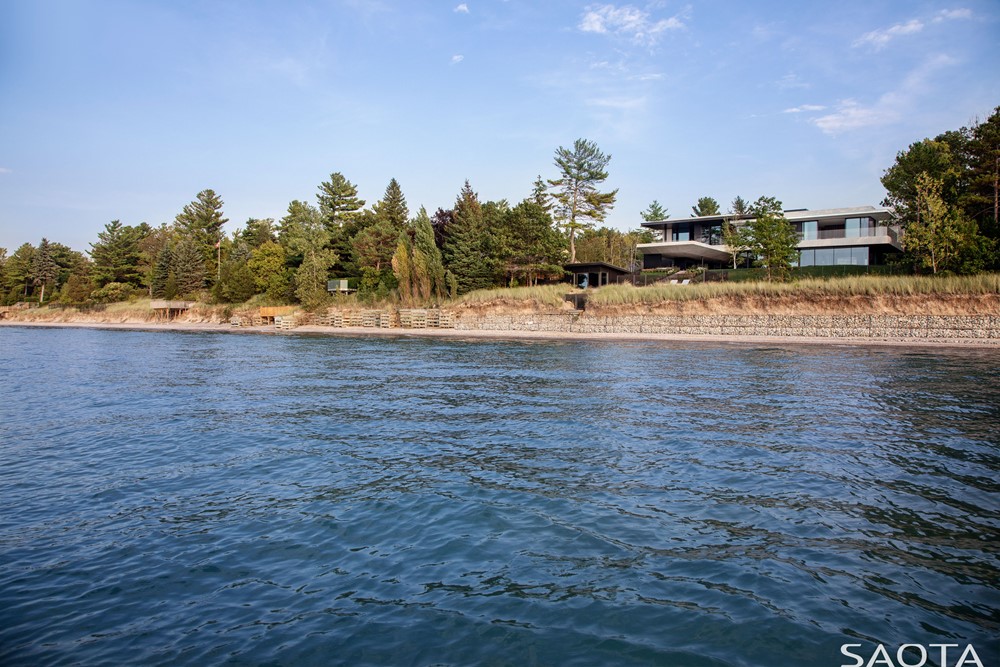 While the aesthetic approach that Cape Town-based architecture firm SAOTA took might seem like a radical departure from the traditional regional architecture, the architects have taken great care to keep the design unobtrusive and sensitive to its setting, while still making an architectural statement.
The site is a bluff occupying the transitional space between water and forest, rising 3.5m from road level and then dropping down to the water to create a grassy embankment. The building is set back on the property towards the street to preserve the natural bluff. On approach, the house is largely concealed by the surrounding mature fir trees, appearing as a simple light-coloured stone box floating effortlessly between the tree trunks. The rear of the house, facing Lake Huron, dissolves into a two-storey wall of glass washing natural light deep into the interiors.
Conceptually, the design consists of a series of stacked and suspended rectangular boxes, one embedding the building into the ground plane, the other suspended overhead to allow the living level to exist between the volumes.
An indoor/outdoor volume to the south anchors the building and maximises the site’s lakeside views while allowing the living spaces to occupy the foreground. A bank of bedrooms projects backwards above the garage.
The way in which the building is largely obscured from the street and in turn screens views of the lake helps build suspense on arrival, only to satisfy the Lake Huron sense of anticipation on entry via the large pivot door. From the threshold, a dramatic triple-volume atrium lets in natural light and draws the eye outwards towards the view.
Programmatically, in keeping with the client brief, the spaces are fluid, the levels easy to navigate and the layout simple and well-structured, allowing for a casual atmosphere. The vast central volume is subtly contrasted with more intimate and contained volumes in the kitchen and other living spaces for a varied and articulated spatial experience.
The upper-level housing the master bedroom is devoted entirely to the owners’ private space, including an office and a gym. To the front of the house, a covered outdoor entertainment area flanks a swimming pool. A boardwalk and staircase descend to a refurbished cabin that predated the house, and now houses a guest suite and additional outdoor entertainment area to facilitate long summer daysplaying on the lake.
The client’s favourite room is the ‘engine room’ on the lowest floor, which houses all the building services infrastructure. A commercial-grade Building Automation System (BAS) controls and monitors the home, ensuring optimum performance at all times. A 15kw solar array provides power to the home and excess power is regularly fed back into the utility grid for credit and later use. The limited municipal infrastructure for stormwater and sewer resulted in an on-property underground stormwater system that can handle a 100-year storm and an eco-flo septic system to deal with all sewer requirements on site.
The finishes, externally and internally, favour a ceramic panelled system robust and hard-wearing enough to prove long-lasting in the extremes of the Canadian climate, which together with the home’s energy efficiency and the general longevity of the project and its materials, components and fittings contribute to its sustainability.
The interior decoration was by ARRCC, the interiors division of SAOTA.