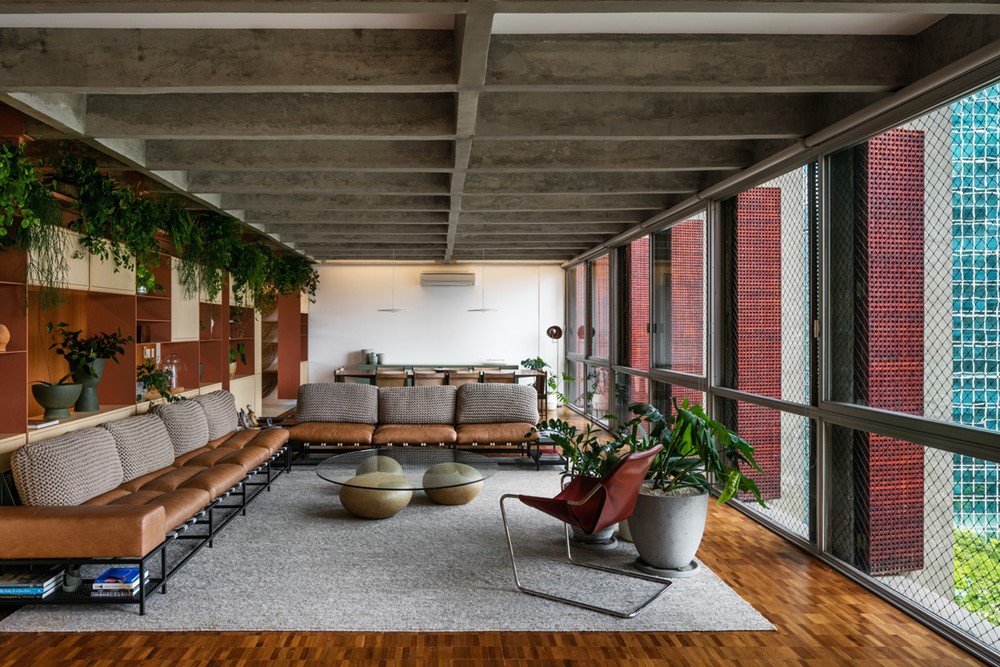 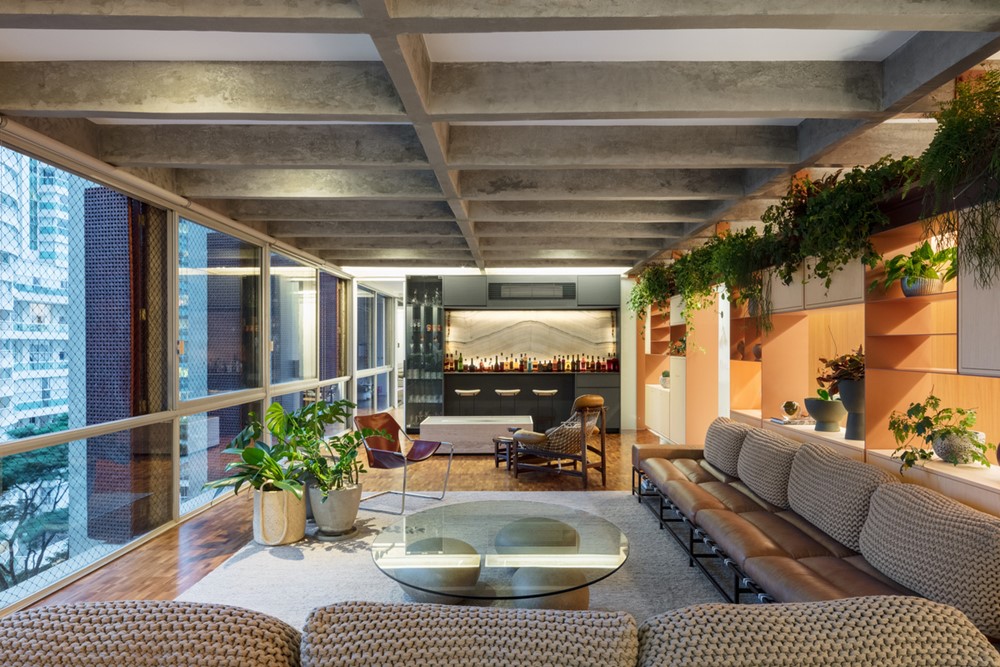 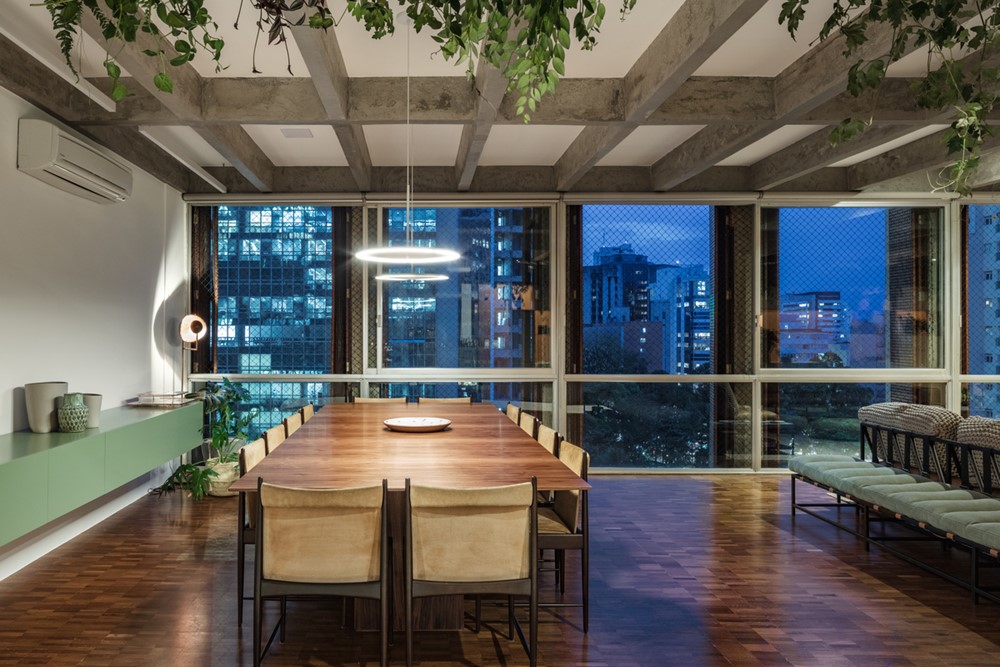 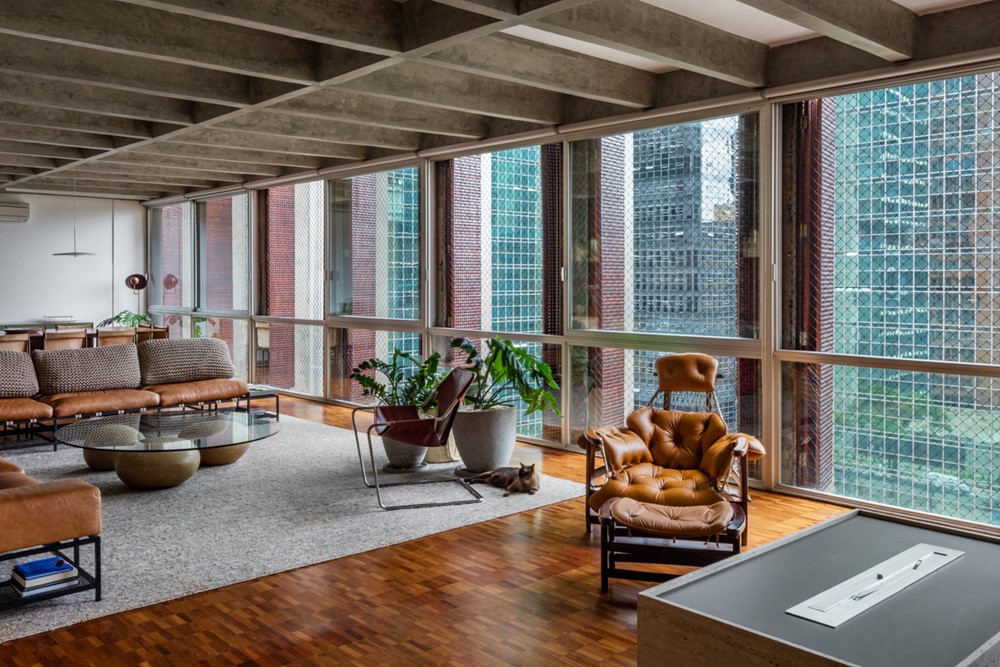 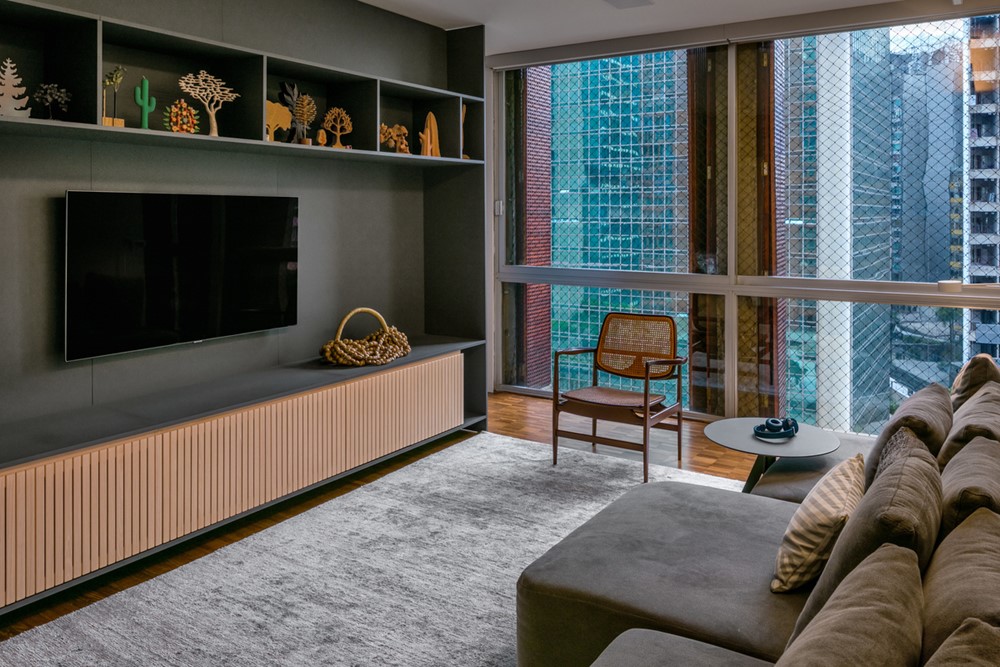 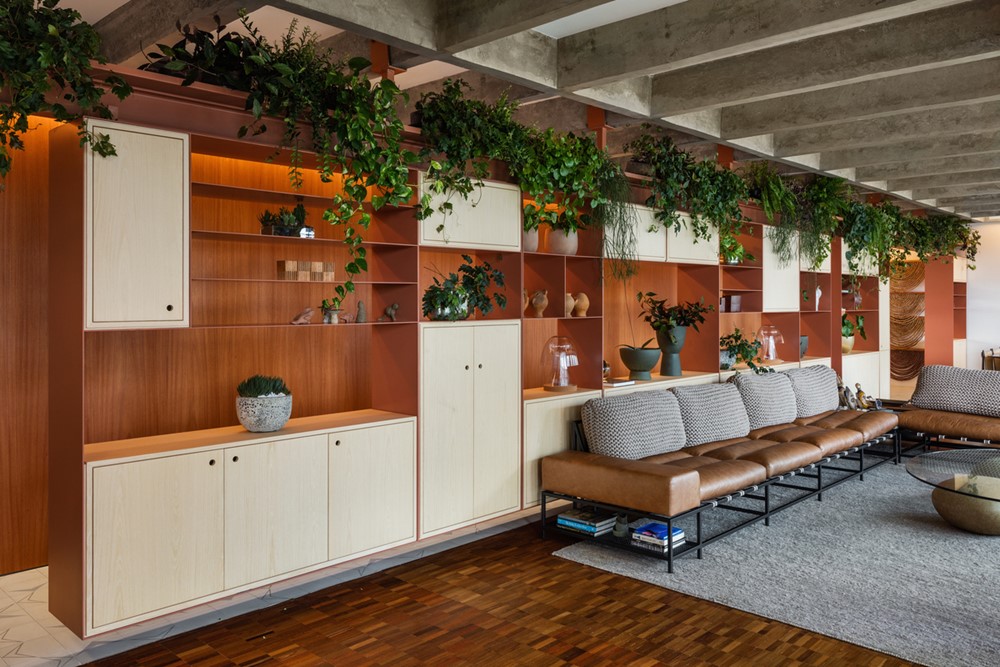 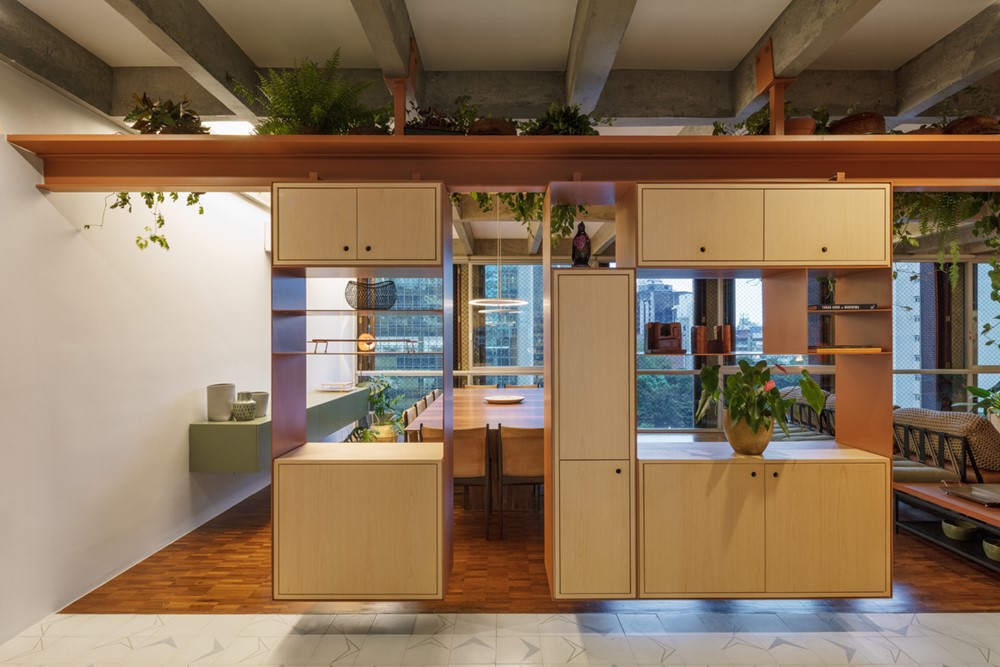 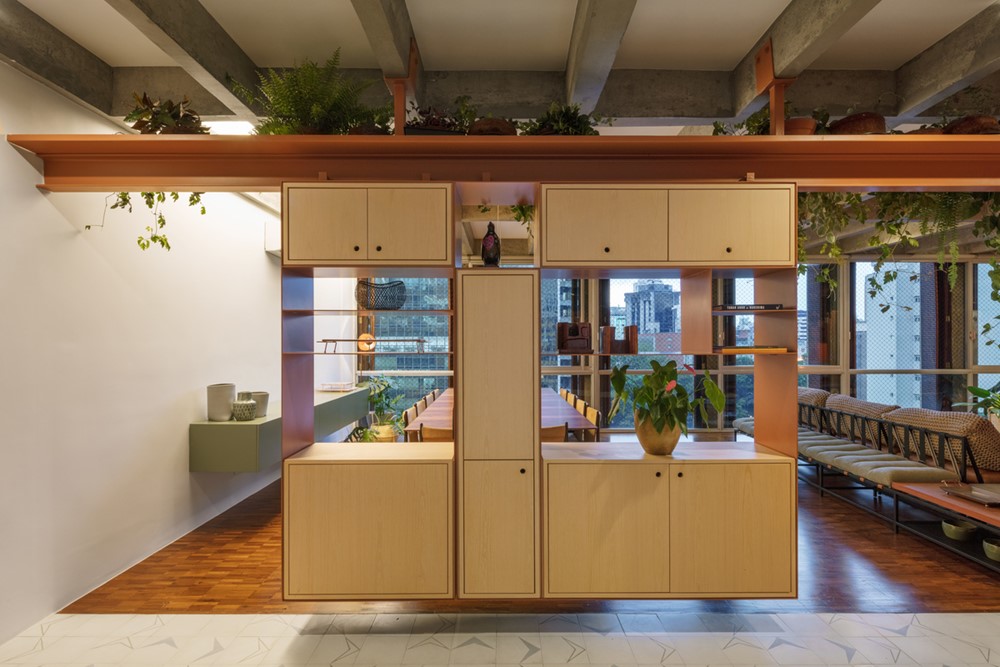 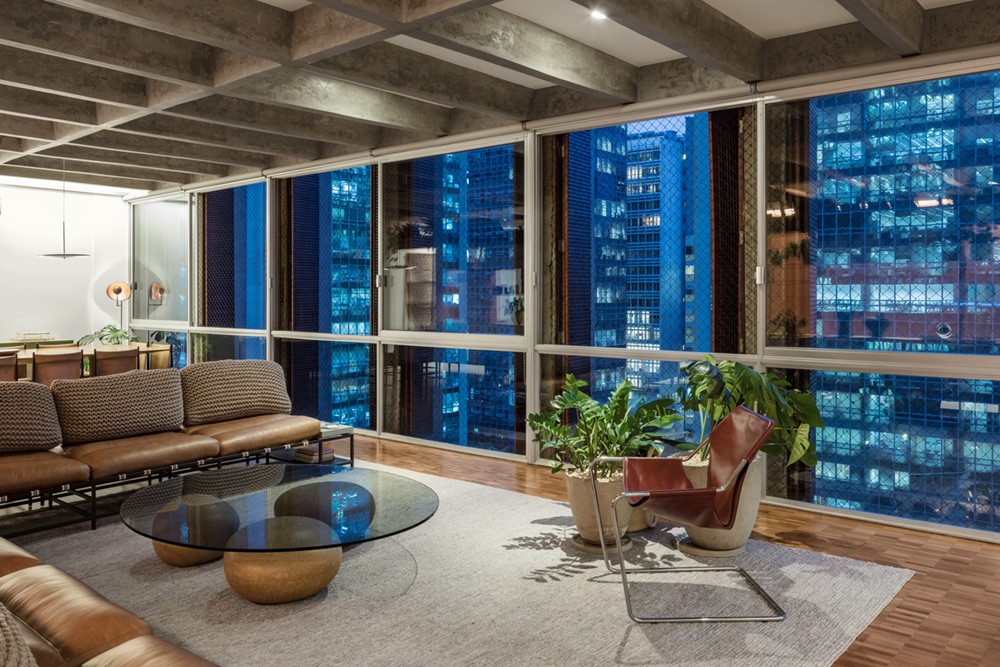 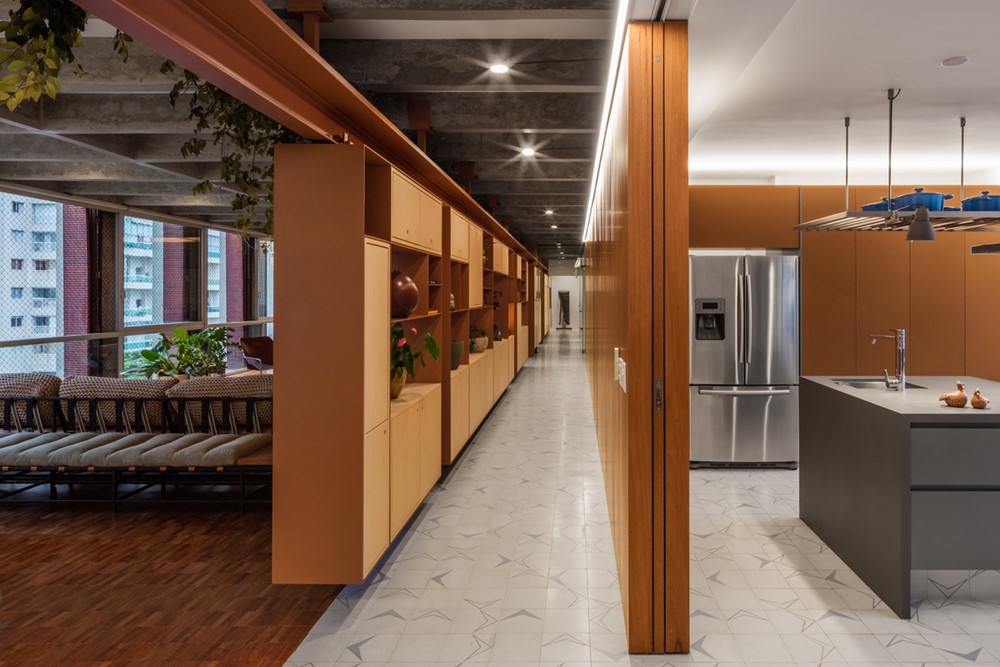 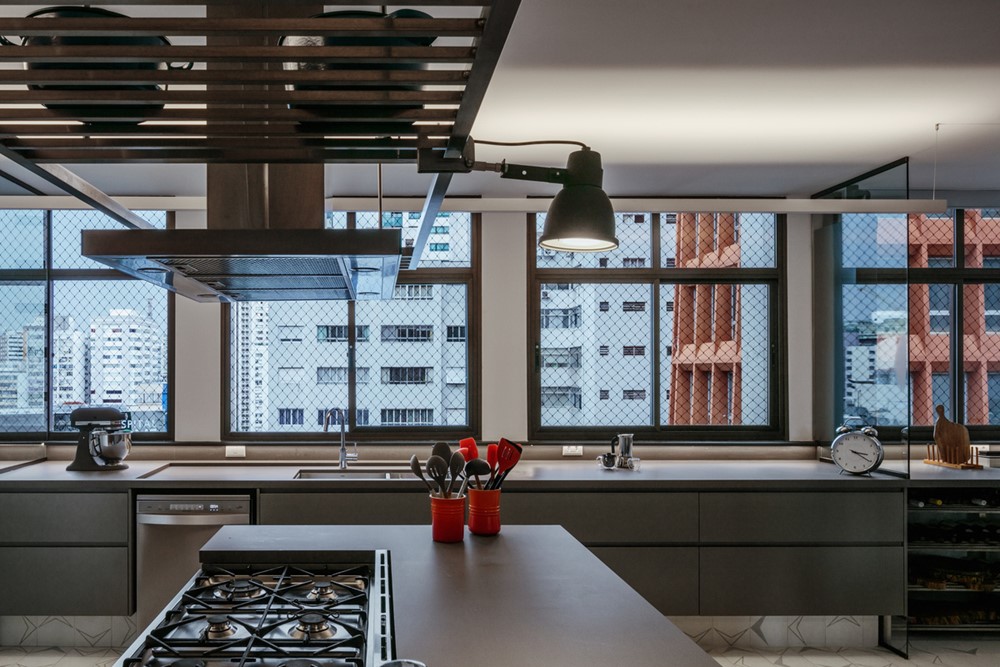 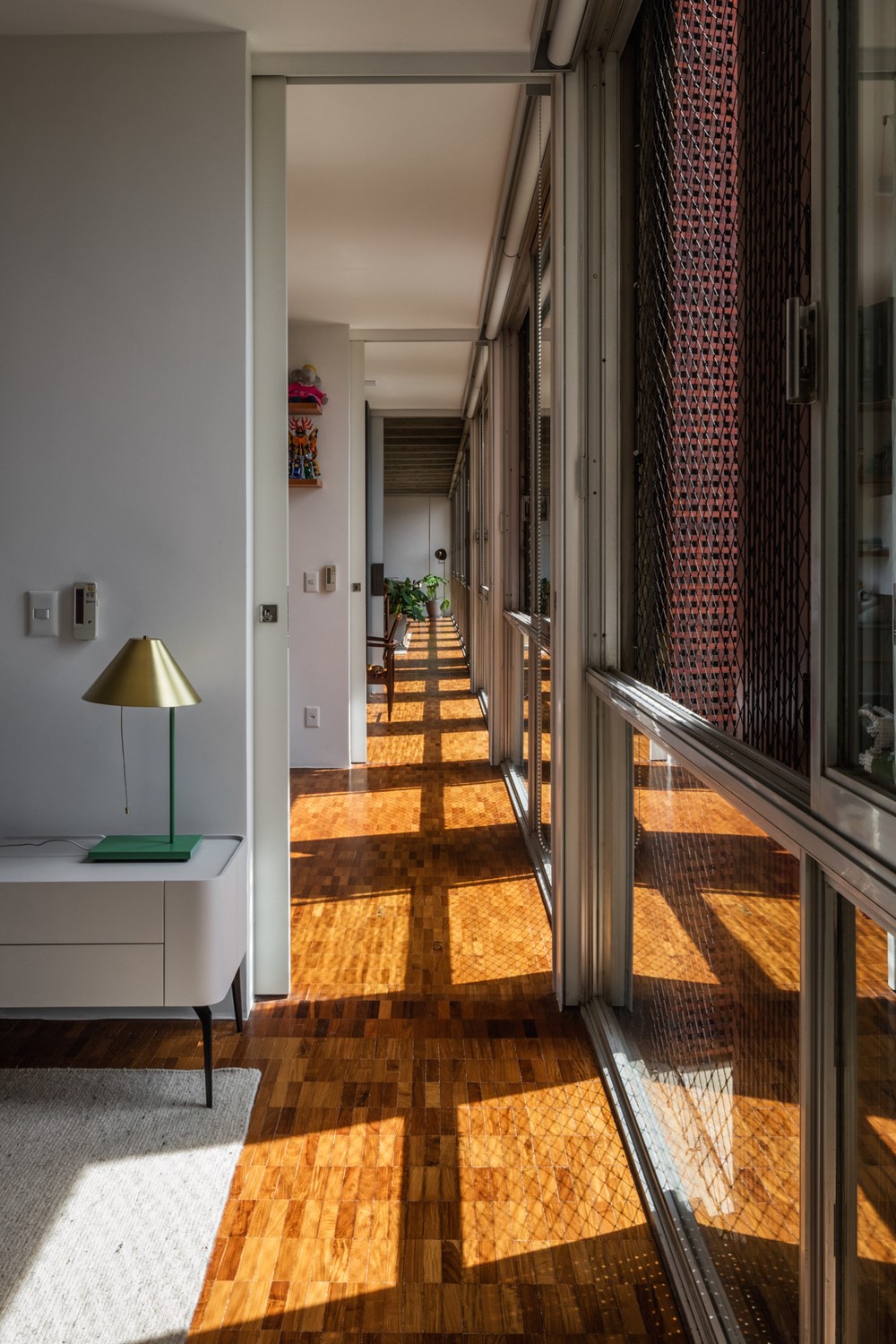 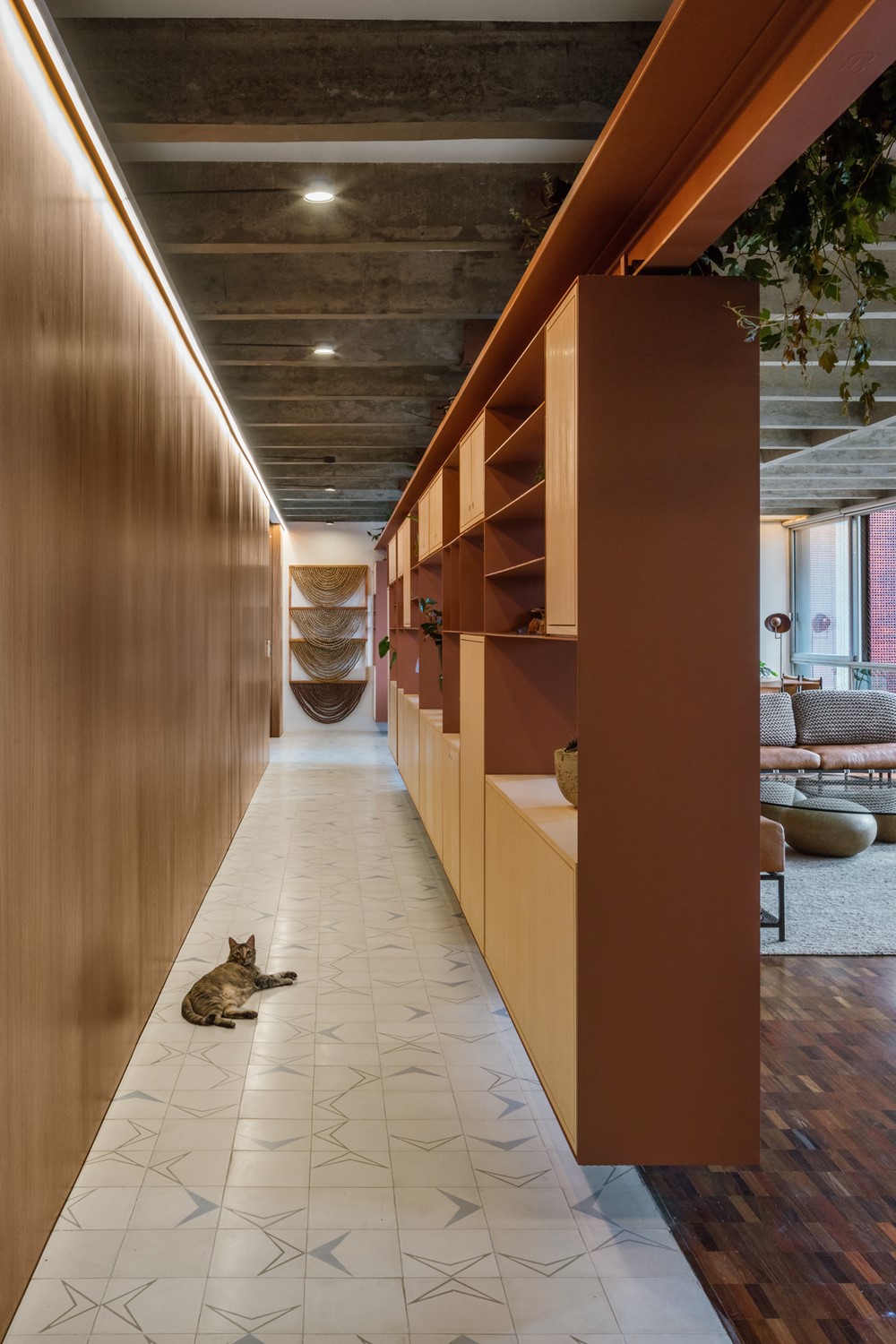 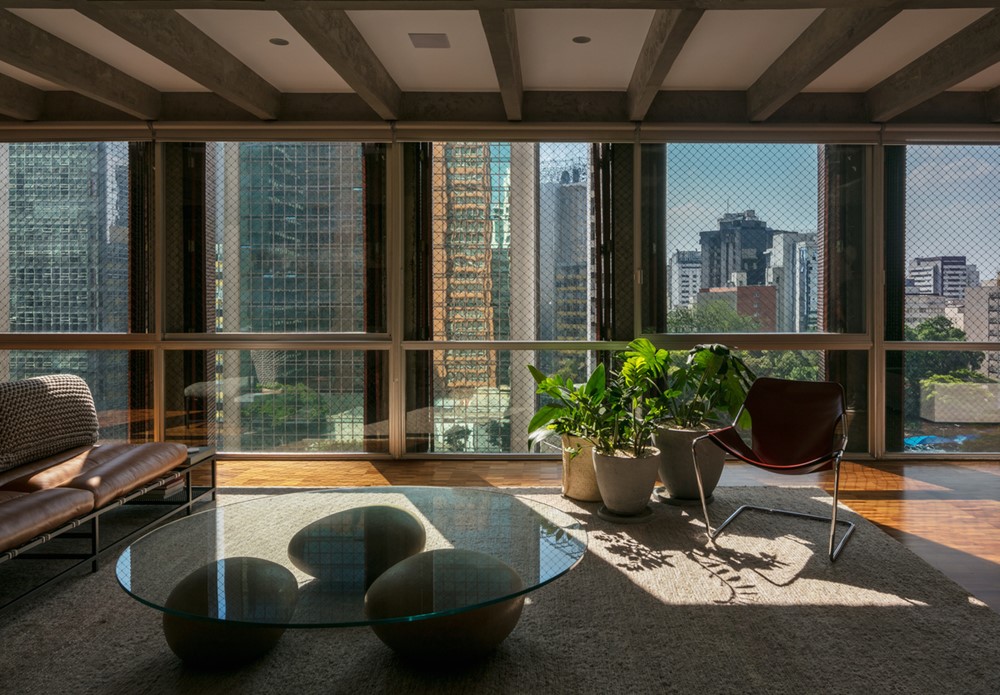 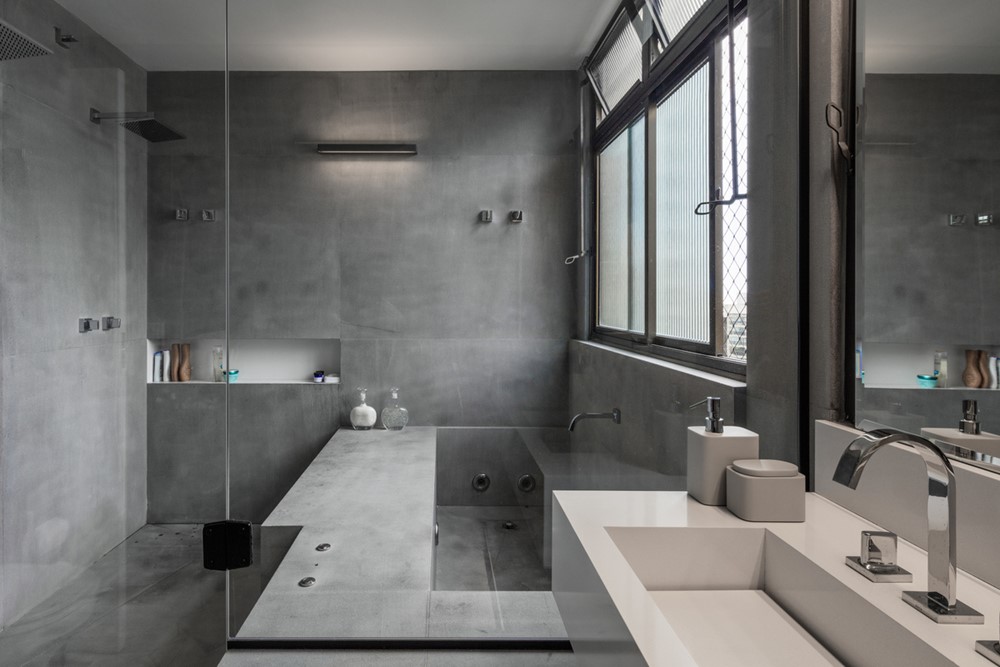 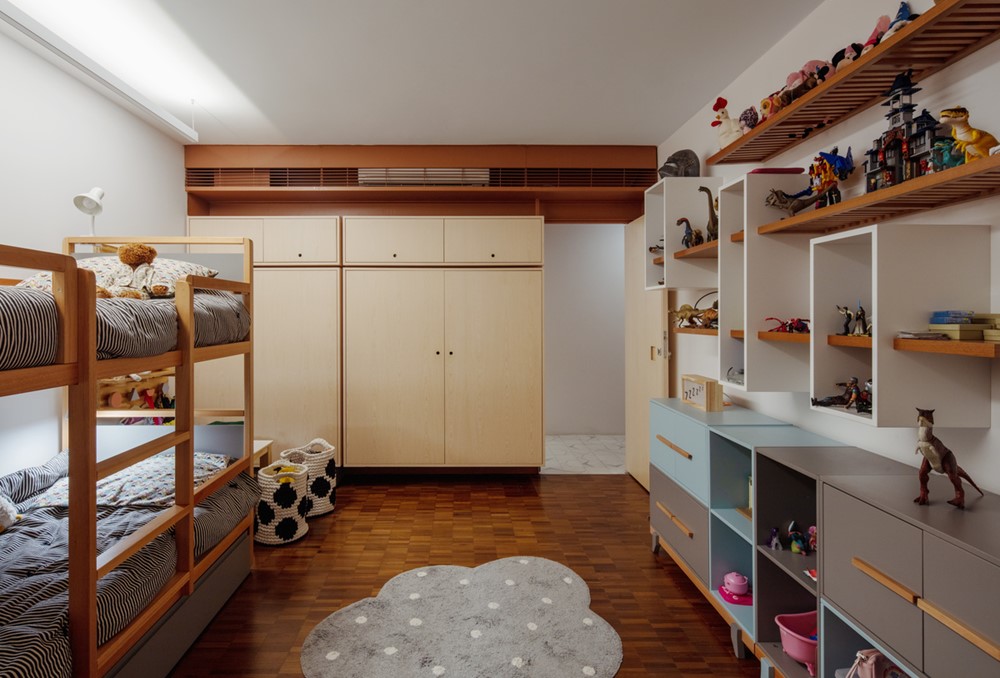 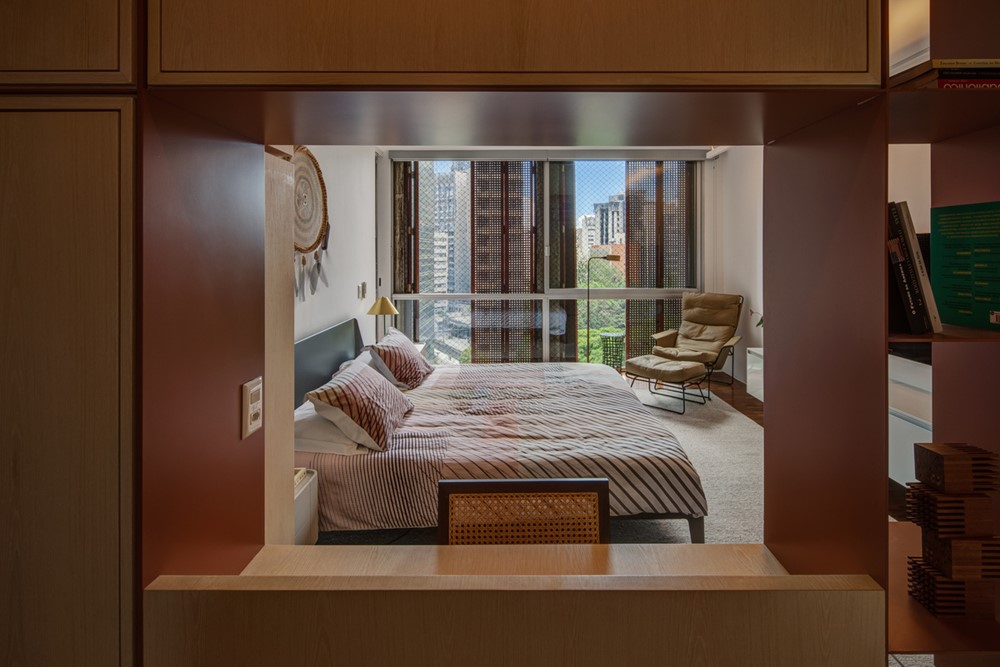 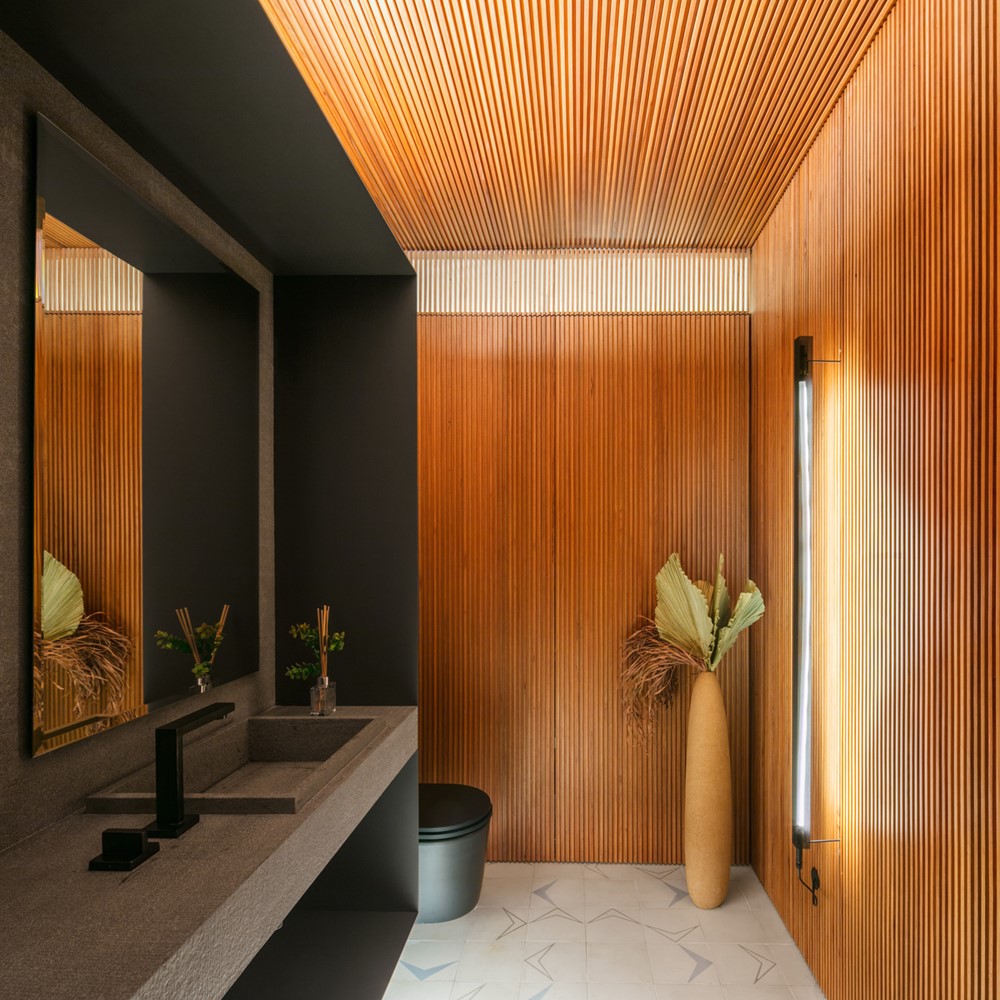 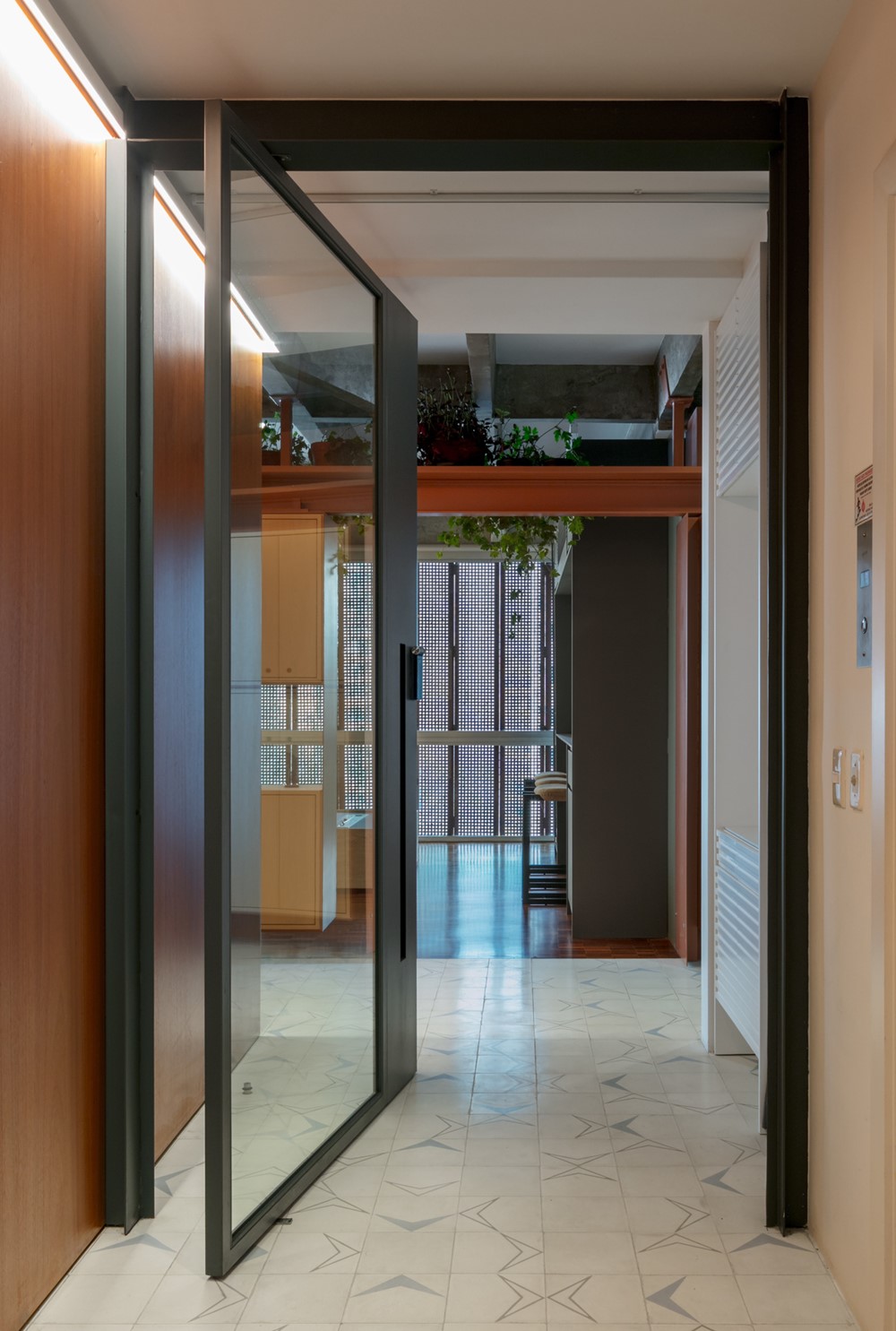 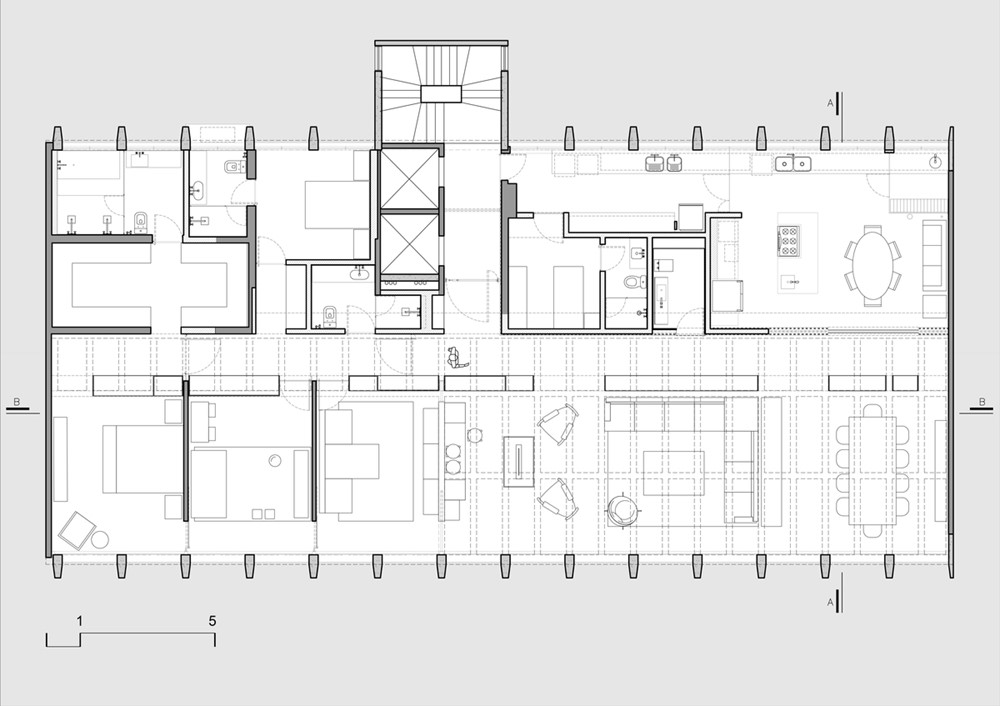 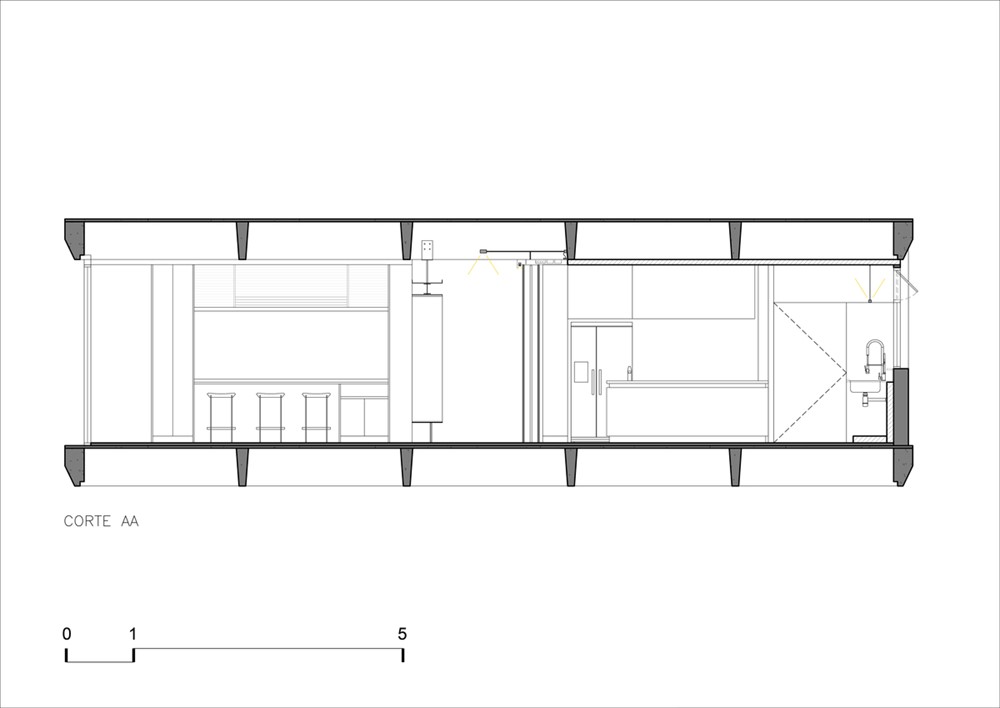 A large mashrabiya – featuring windows with wooden trusses, an Iberian heritage typical of Brazilian architecture, draws your attention on Alameda Ministro Rocha Azevedo, near Avenida Paulista in São Paulo. It is a residential building designed in 1964 by the architects Alberto Botti and Marc Rubin, both partners at Botti & Rubin Associated Architects.

The twenty-six-meter-long façade with exposed concrete beams and columns emphasizes the building technique and plasticity of the concrete. Internally, large glass panels frame the urban landscape, allowing for the enjoyment of natural lighting and ventilation, while light can be controlled by closing the wooden trusses.

The structural design exposed on the facade continues its narrative inside the apartment. The demolition of the ceiling revealed the beauty of the modular concrete beam grid system. The grid forms a twelve-meter-long span and opens into a sequence of 15 porches. Our interpretation of the original 320m² surface identified two wings: the bedrooms and social areas look out to the street, while the wet areas such as bathrooms, utilities, and the kitchen are in the back.

Most of the demolition work took place in those wet areas, changing and opening the rooms to ensure natural light and cross ventilation. The result allowed for greater interaction between the kitchen and the social area, as these environments are now separated only by retractable wood panels, creating two facades full of light and ventilation.

The key design element is the twenty-six-meter-long raised shelf system. It connects the whole apartment along its extension and spatially defines an “equator line”. The shelf system is a structural composition made of modular steel panels, sometimes filled with wood cabinets, depending on the use. The long set of modules interacts differently with each space it touches: in the corridor, the dining and living room, it stores houseware, displays art, and supports plants; in the family room it holds books and electronics; and in the bedrooms it serves as a wardrobe. The shelving system moves along rails to reconfigure and dynamize the original spaces in different situations. The two wings are divided along the corridor formed by the shelving system, with the flooring on one side covered with colorful hydraulic tiles in geometric shapes and wood walls and the original wood floor on the other. The beauty of the handmade work shown in the tiles is also found on the kitchen wall with the remarkable Panacea Phantastica panel by the artist Adriana Varejão.

The clients demanded a daring solution to connect all the rooms along the street facade, that would result in a non-interrupted sequence of windows and an exceptional circuit for the family.

The private elevator hall and internal hall were visually and spatially integrated, bringing natural light to the building core.

Our comprehensive approach enhanced the high quality of the original project. Our remodeling design valued the modern architecture and structural beauty of the building, based on its rigorous attention to detail, providing new openings for natural light and views, and better circulation.

Throughout the design process, each element was designed with a lot of thought, specifically for this apartment.