Gold Street Residence is a project designed by Sarah Kahn Architect. This project was a typical residential addition to an existing heritage listed terrace house but was situated on a very special and unique site – so became a very atypical project. With the long western boundary directly abutting a leafy park plus street frontage to the site at both the front and rear of the property, the addition afforded a chance to maximize views of the park and to play with the sculptural 3d form of the new addition. Photography by Tatjana Plitt. 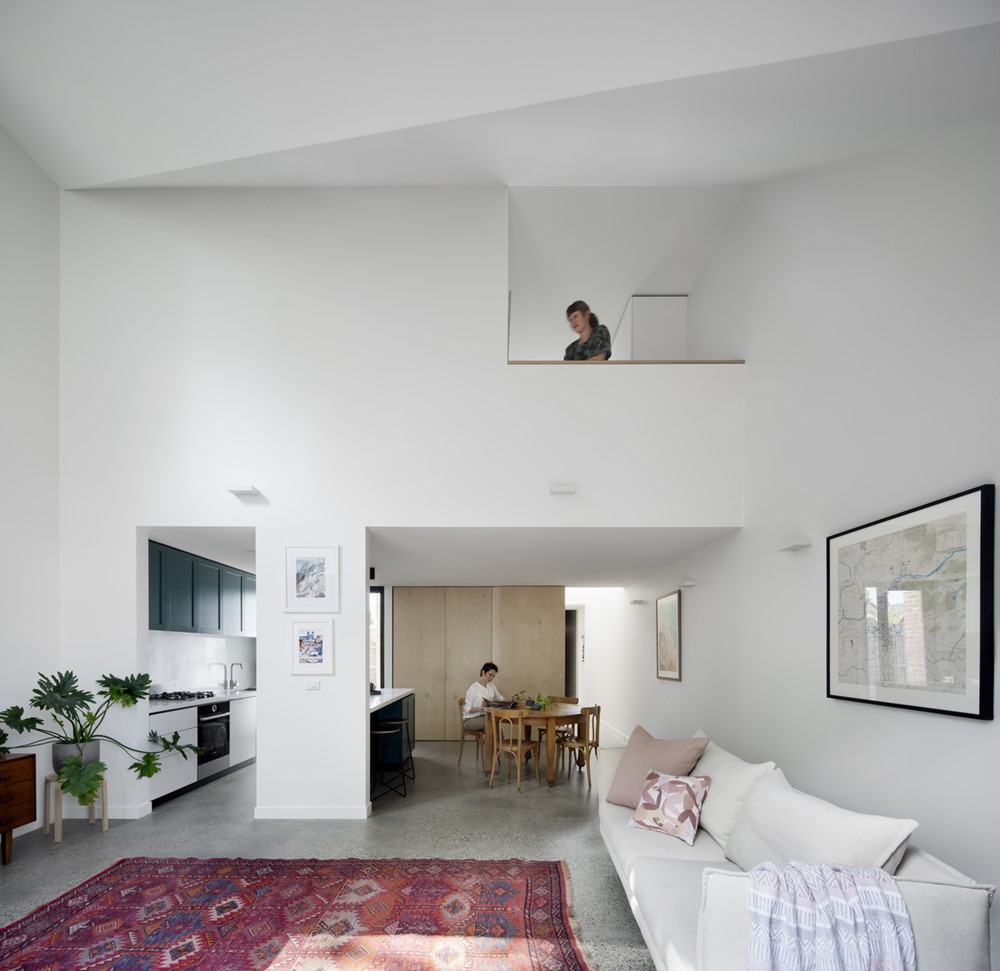 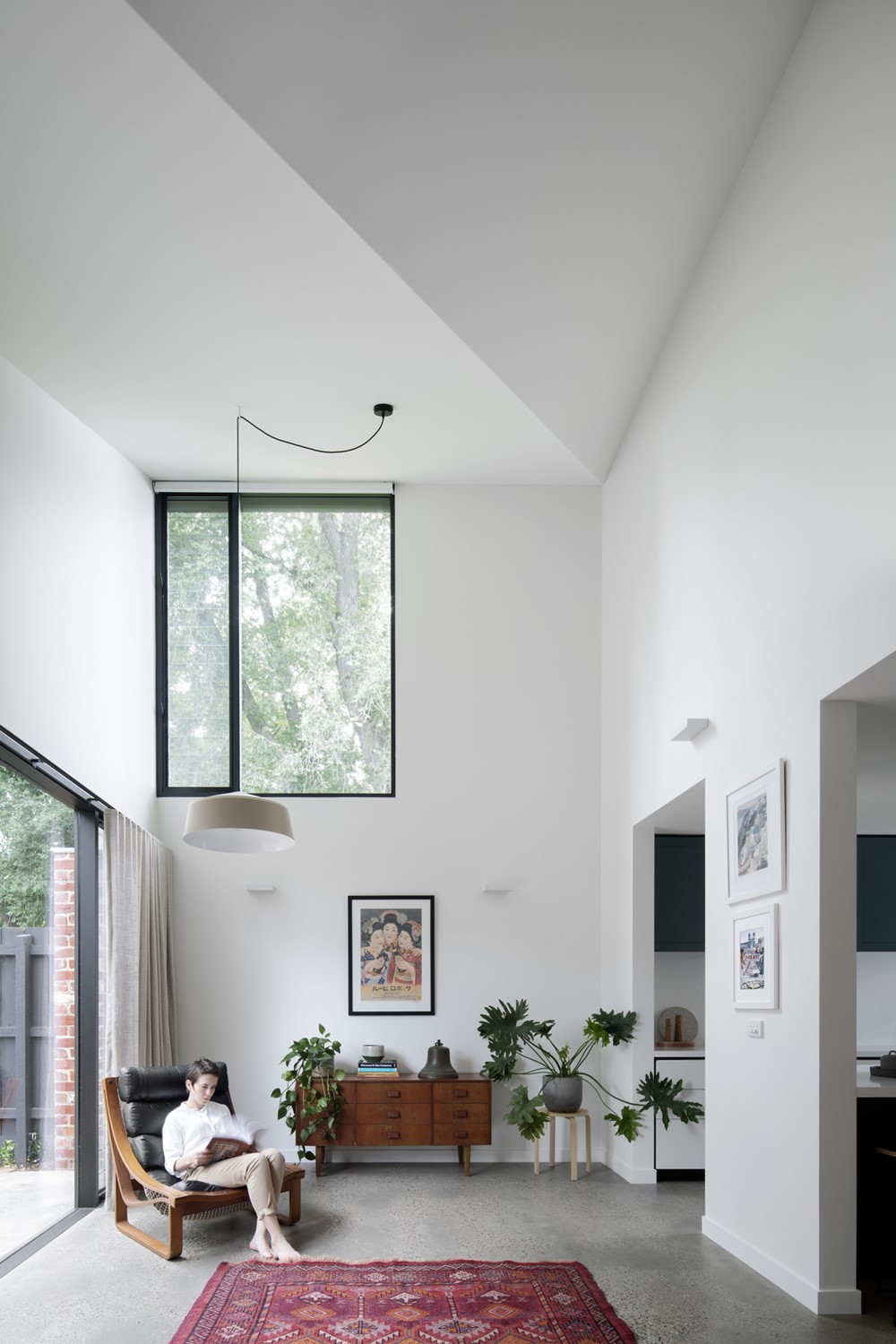 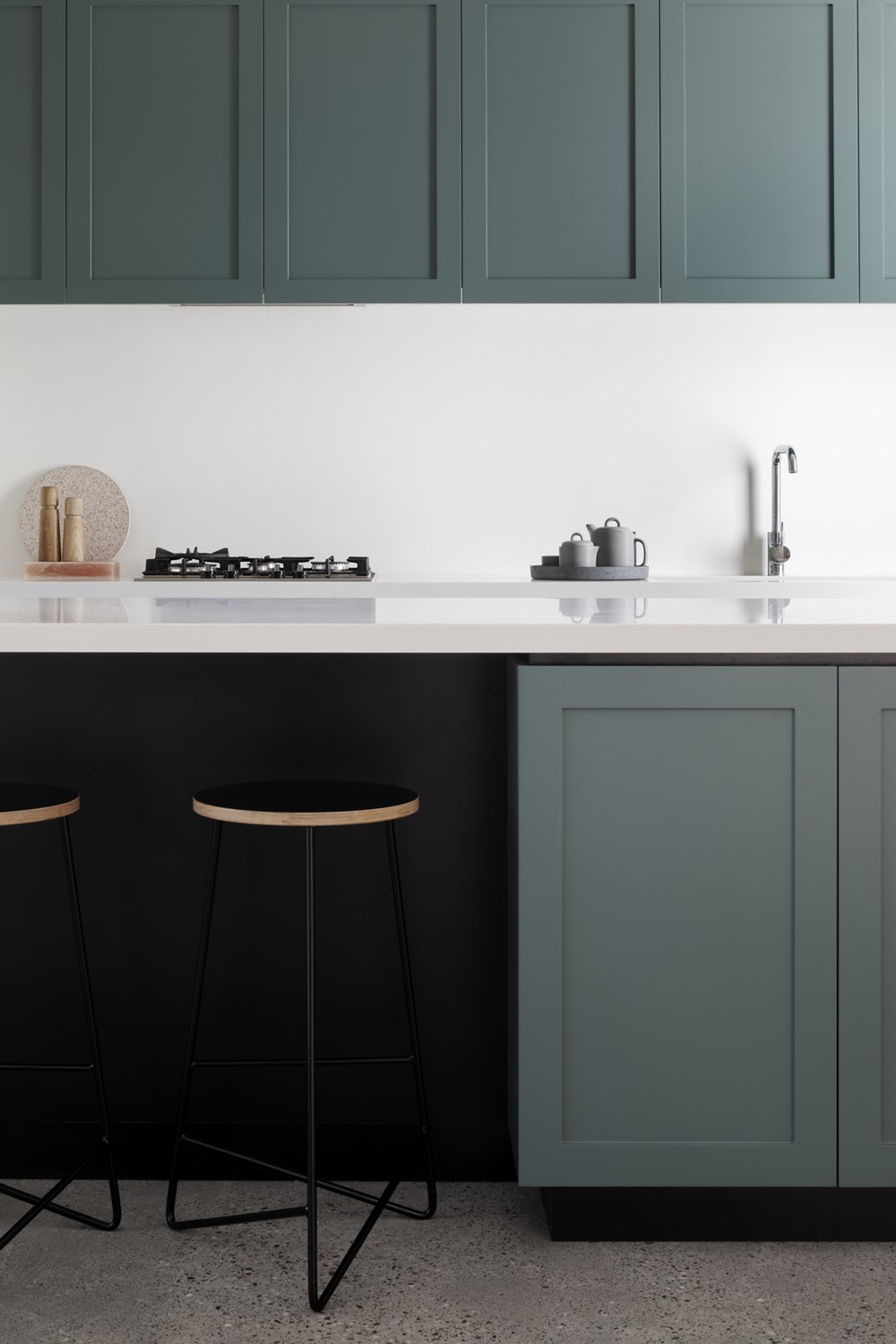 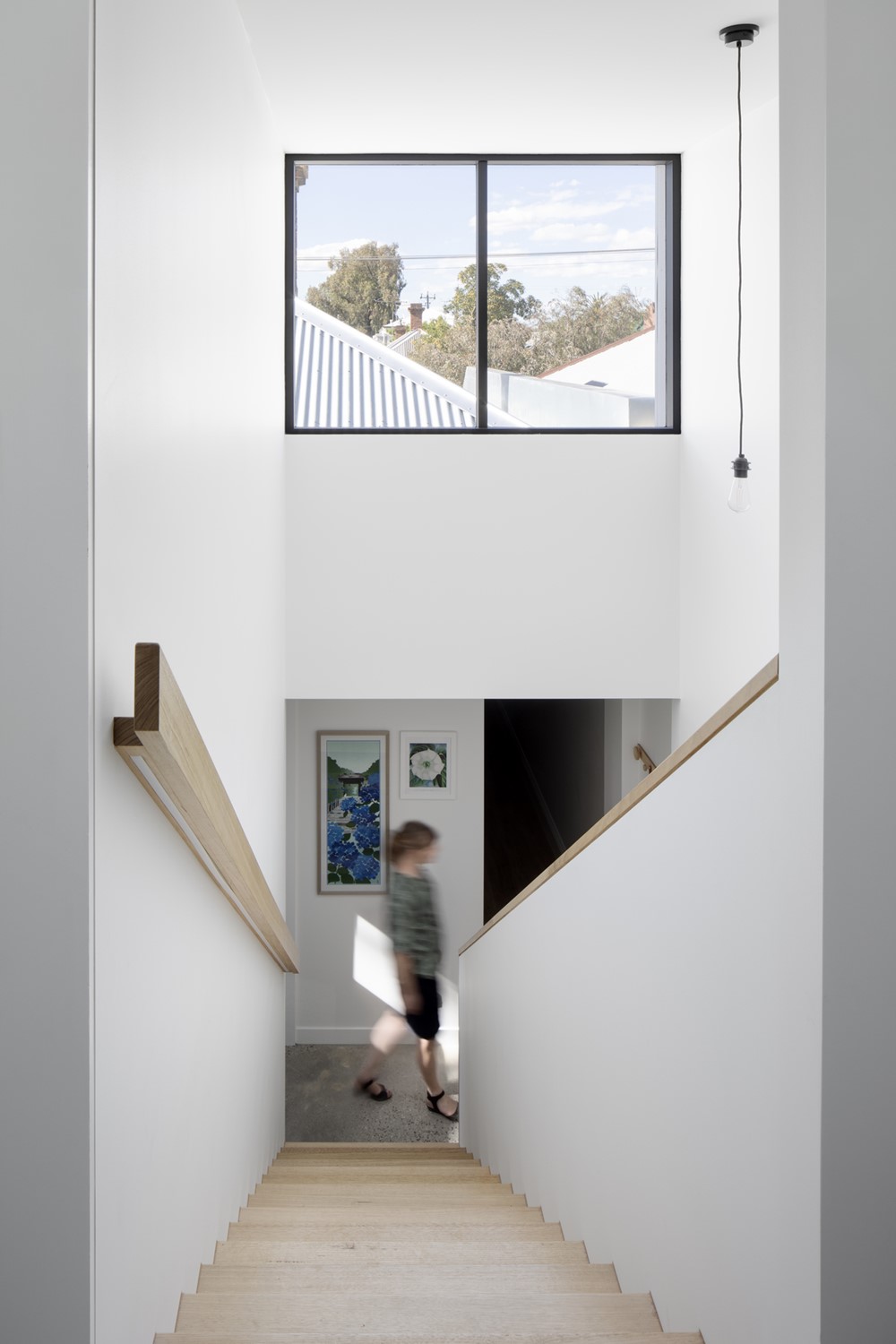 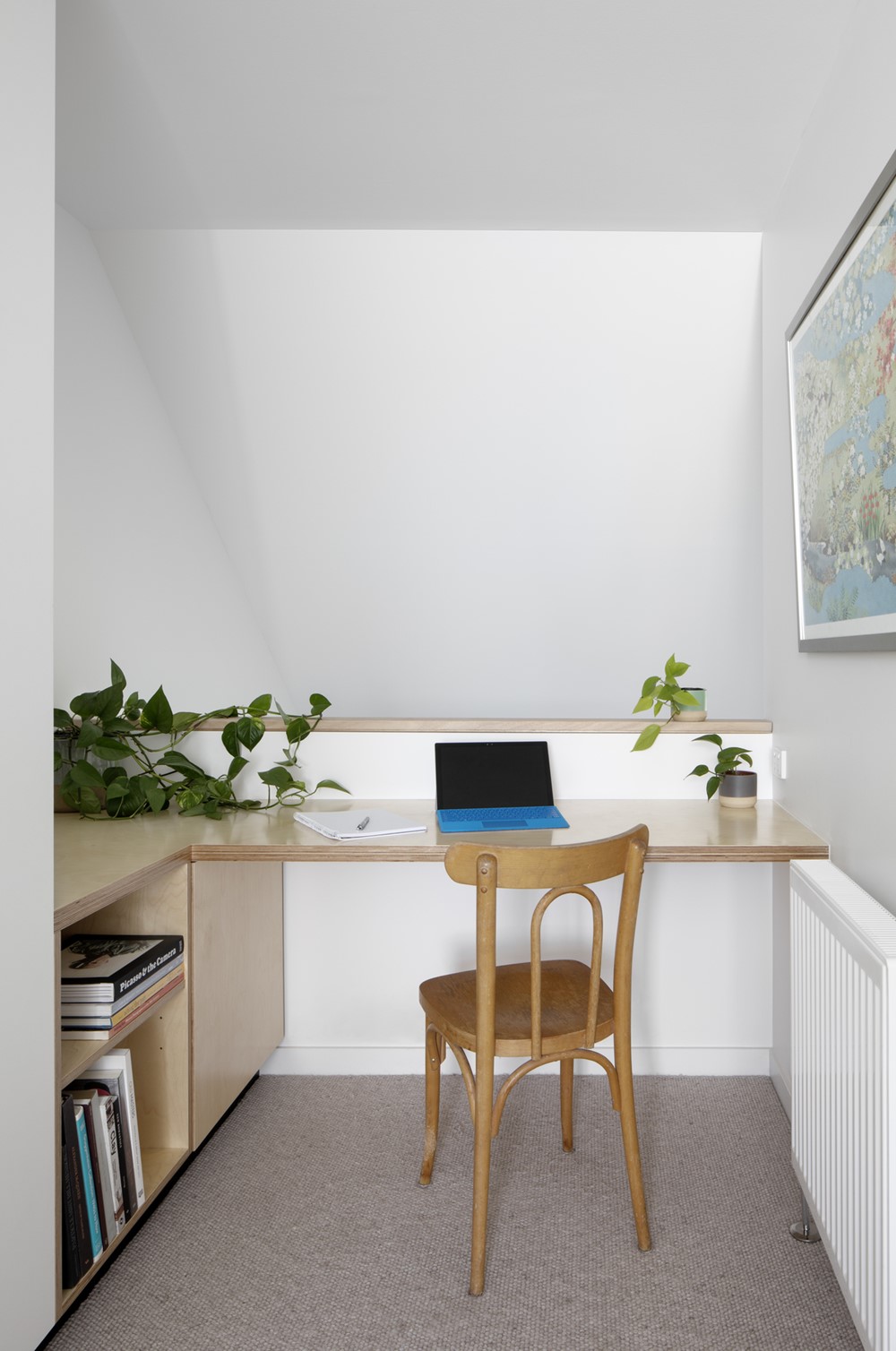 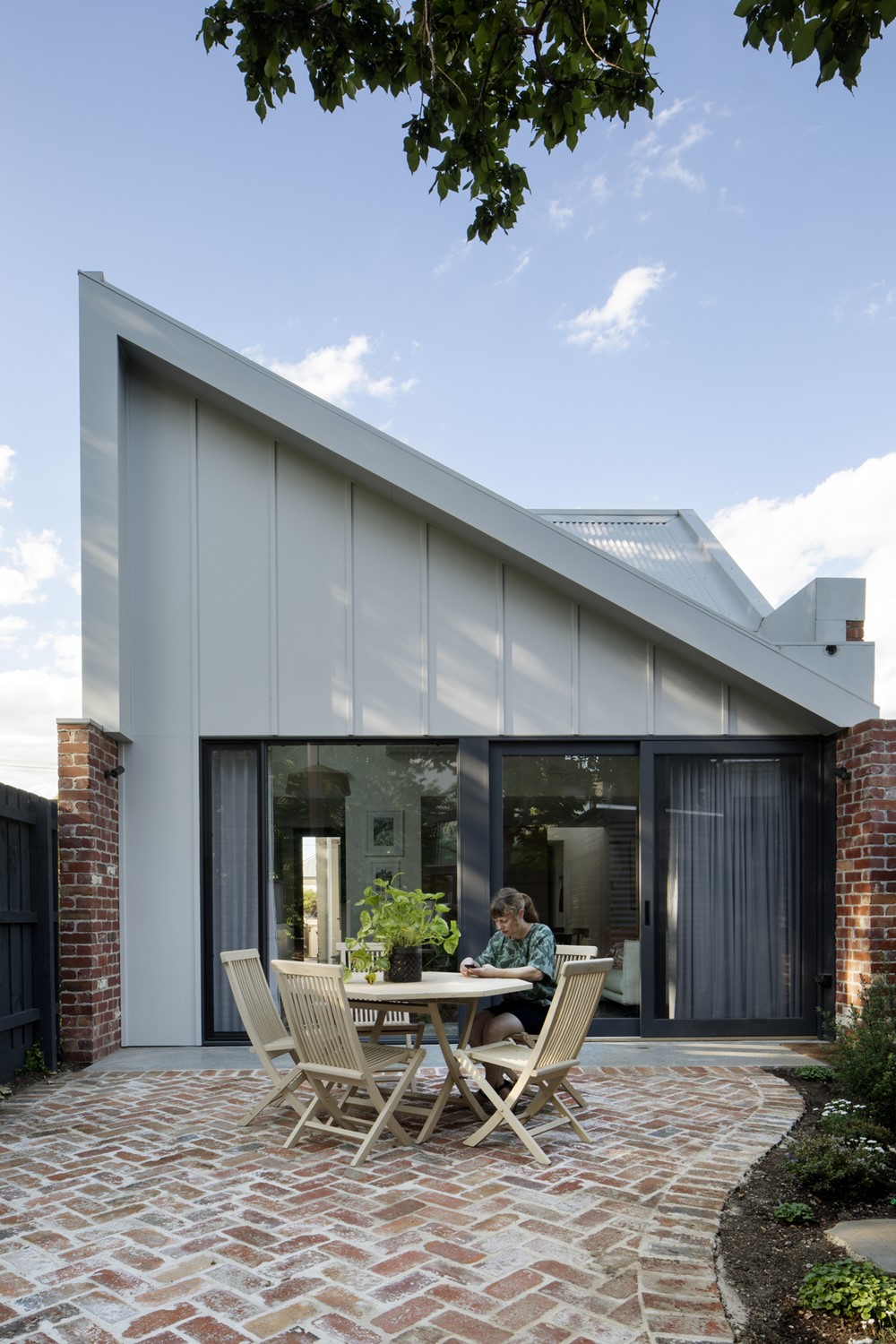 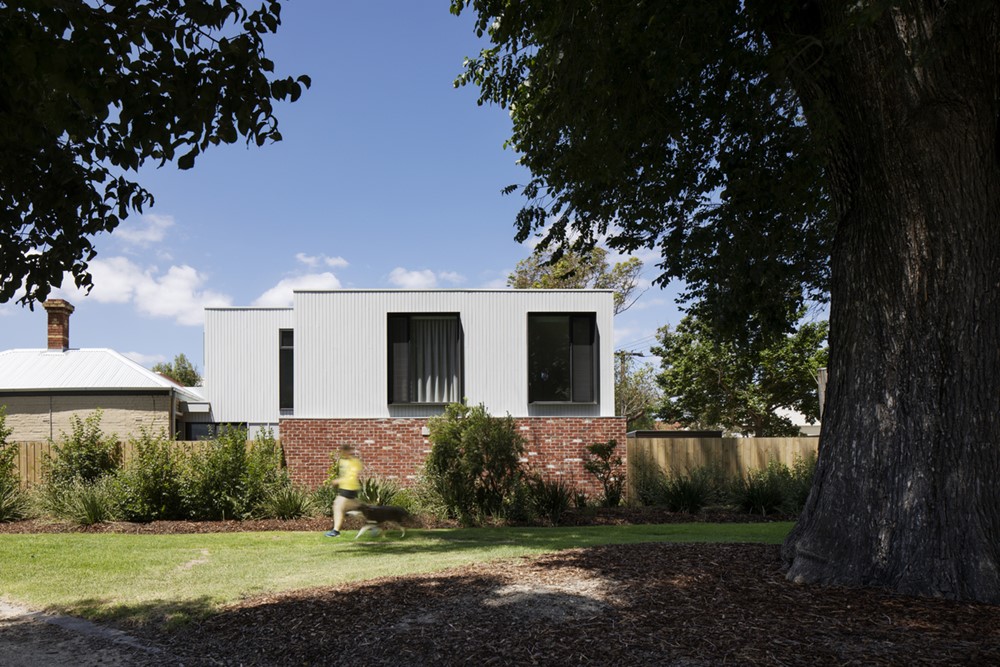 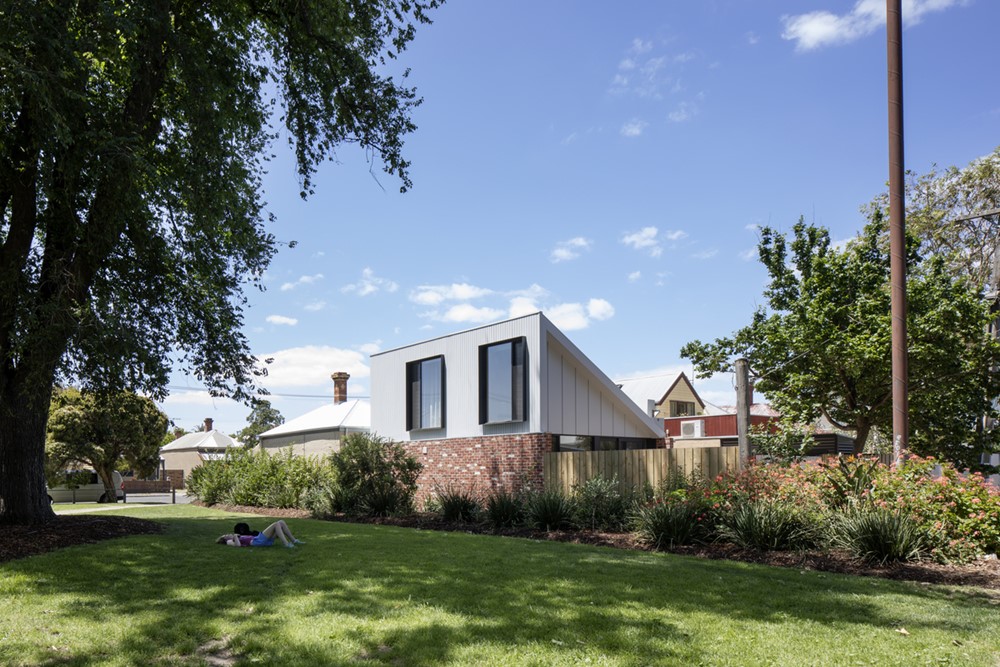 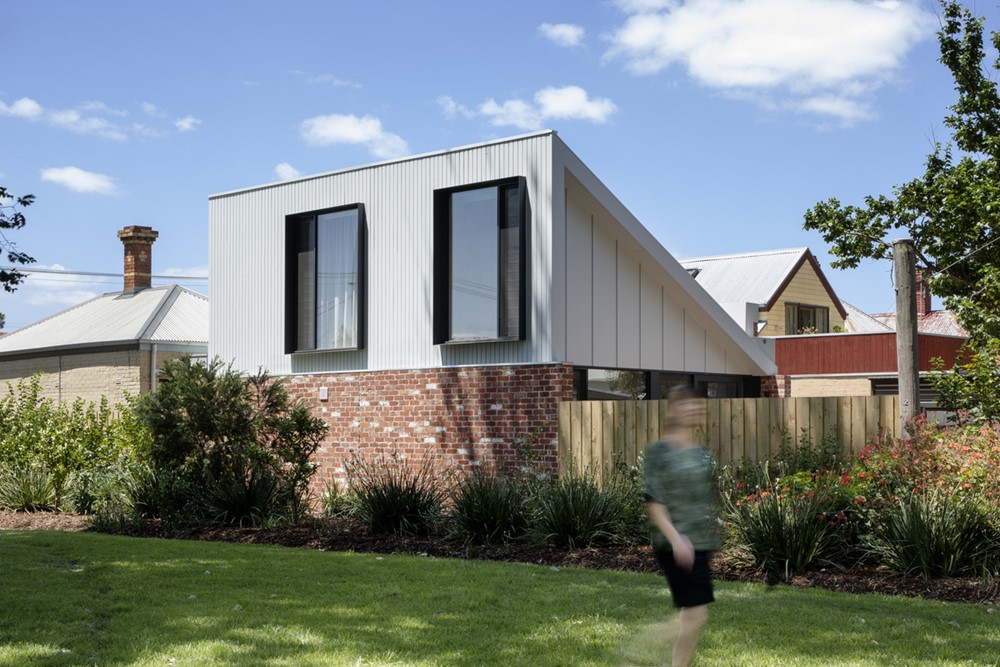 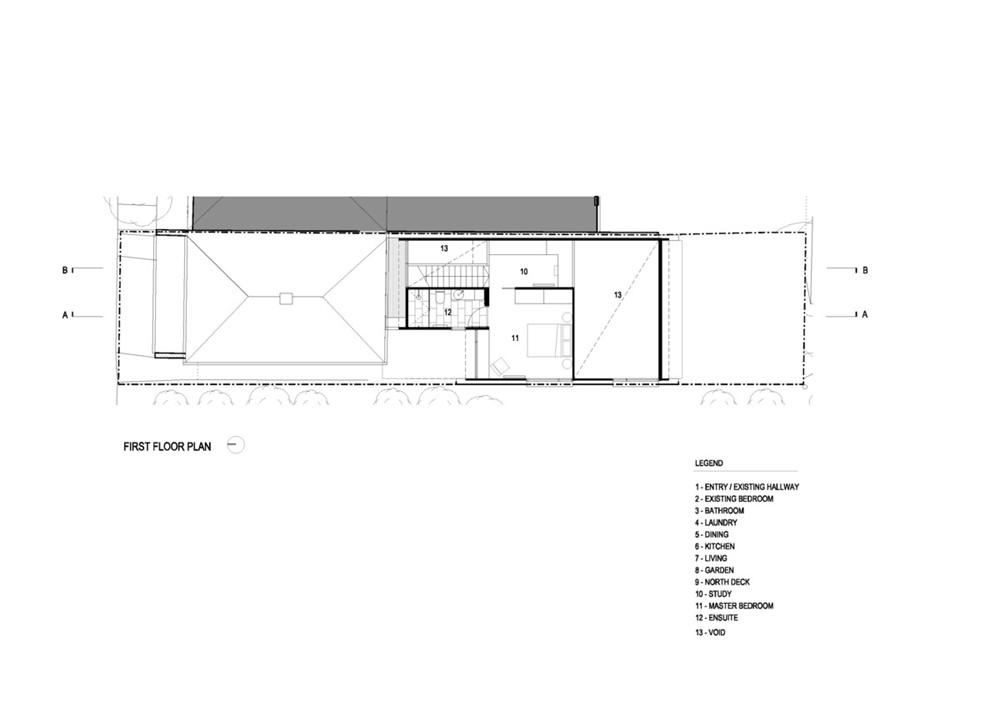 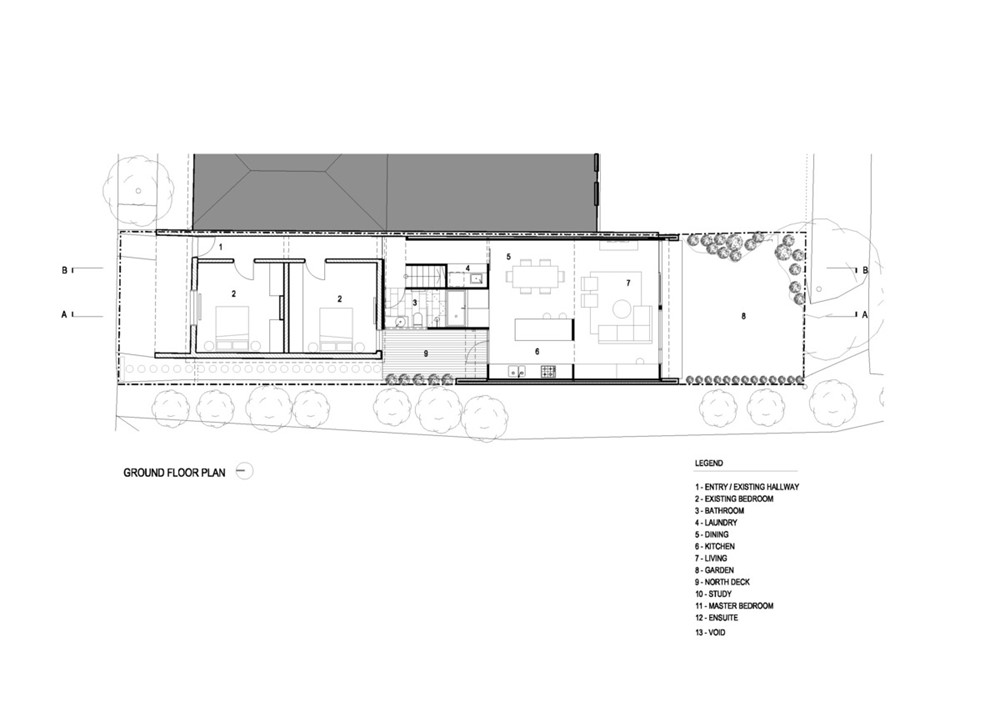 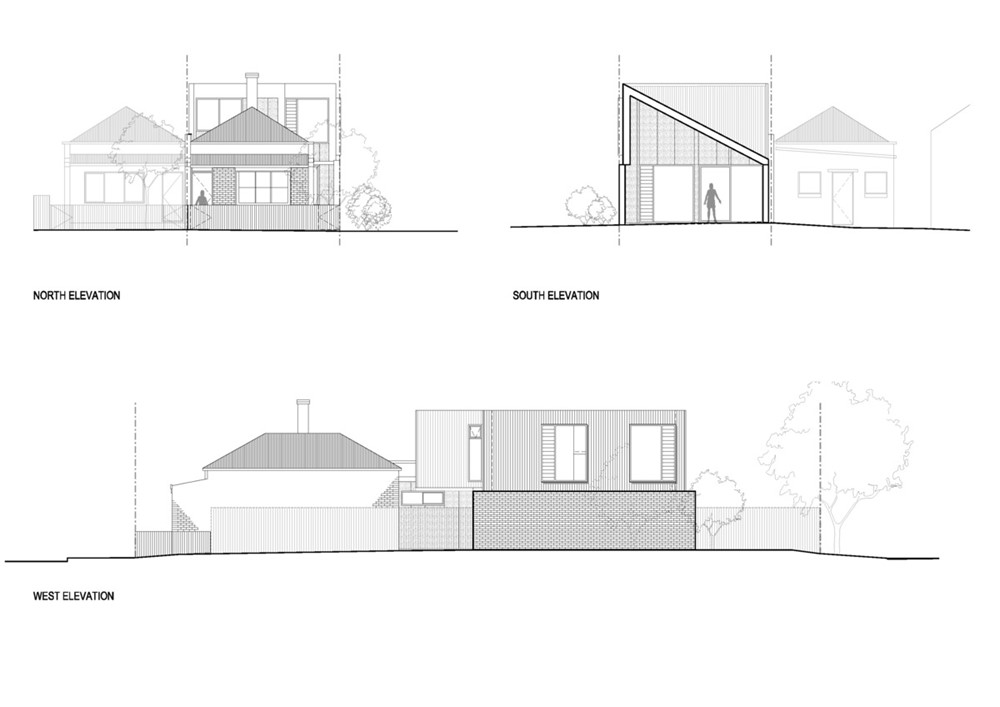 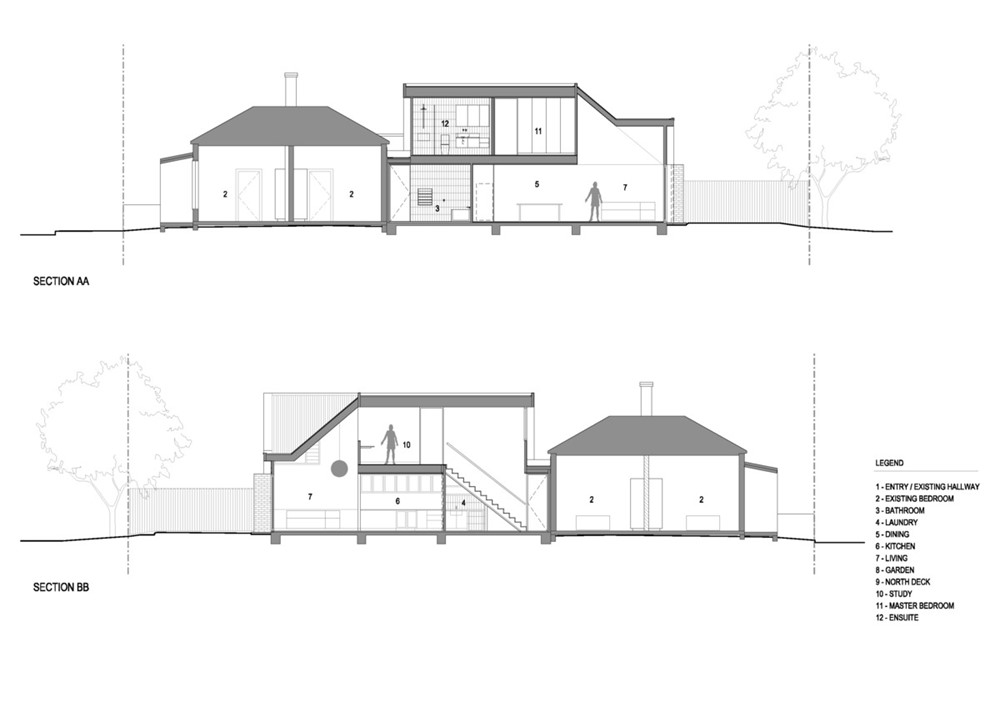 With a limited budget and a tight site, the brief called for an update to the tired terrace house to create a modern 3 bedroom two bathroom home for the young owner. Increasing access to natural light and the very special views of the adjacent park were key aspects of the design, and creating more useable outdoor spaces directly connected to the interior.

Heritage overlays on the site called for retention of the existing front section of the house including the bedrooms and chimney. The existing lounge and a series of rear additions were demolished to make way for the new addition, with the final completed house actually reducing the overall footprint on the site and creating a larger private rear garden and new north facing deck.

The new addition includes a bathroom, concealed laundry and an open living / dining / kitchen space on the ground floor with the master bedroom, ensuite and study on the first floor. Light and volume are maximized within the small footprint of the addition by creating double height spaces and voids throughout the plan.

Windows at high level capture views of the surrounding roofscapes and frame typical Brunswick views, beloved by the owner and architect alike. The adjacent park becomes a part of the house with views of the mature trees captured along the park side of the house. At ground level, wide glazed siding doors and full width windows connect the interior directly to the rear garden and new deck, making the relatively small spaces feel much larger.

The new addition is designed to contrast with the original retained house. A robust red brick wall along the park boundary creates privacy and becomes a plinth for the new pale grey timber clad first floor form. Reading as double height along the western boundary and raking down to single height on the east where it meets the neighbouring house, the first floor element becomes a sculpted and carved 3d form that seems to change shape as viewed from the park as you move around the property edges. The external form is echoed internally, the ceiling rakes down dramatically through the double height living space highlighting the large windows facing the park.

Internally the finishes are simple and cost effective. White painted interiors are used throughout to maximize the light and feeling of space within the relatively small interior rooms. Feature walls of natural finished plywood and dark painted timber window frames create contrast with the white and together create a simple backdrop for the owner’s eclectic furniture and art collection. A pop of colour appears in the kitchen where the owner’s favourite teal colour is used in the joinery alongside white, black and plywood.

The final outcome is a home that has a very public face and embraces this exposure to the park, yet feels like a private sanctuary within. Framed views and light enter the interior spaces throughout the new addition, providing glimpses of the surrounding neighbourhood and park at every step. A site that was apparently seen by other potential buyers as a liability with its exposed boundary and public face, was luckily embraced as a rare opportunity by the owner and has now provided a unique setting and great potential for the completed home. A little pot of gold.