Fun House is a project designed by Atelier RZLBD. The house, despite being so distinguished from its neighbors, blends into its surrounding so harmoniously. Its simple, rectangular façade with a long horizontal strip of windows on the second floor only mimics the gentle curve of the street in the front and remains crude and frugal in the rest of its details. Behind its unobtrusive and unimposing presence, however, it engages with the peculiar site and clients so energetically. Like a child who can play anywhere with anything, the Fun House discovers playfulness in the two and conceives a playground that belongs to both. Photography by Borzu Talaie. 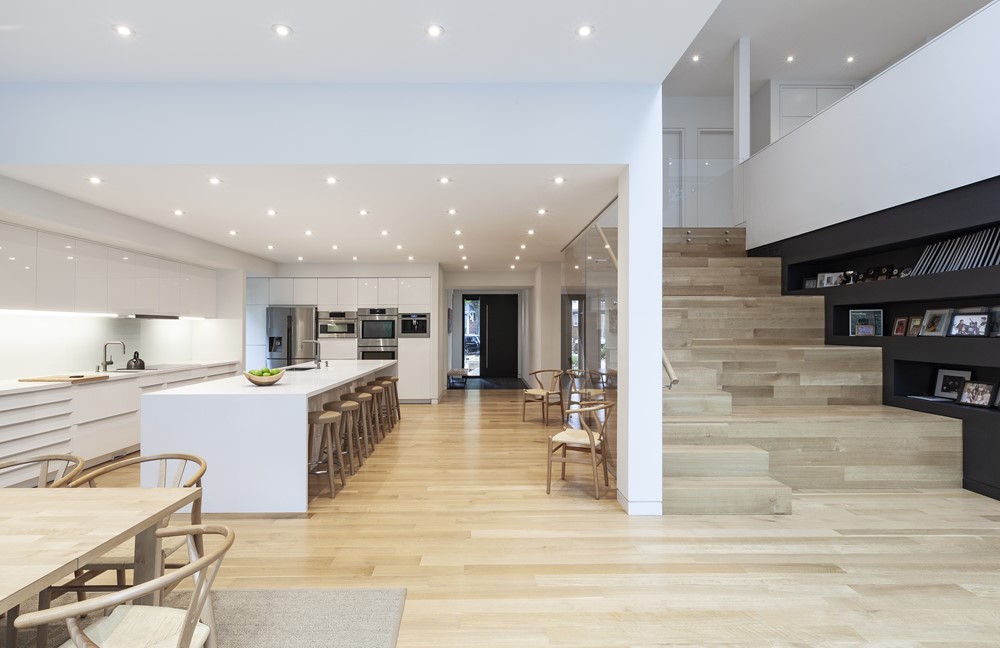 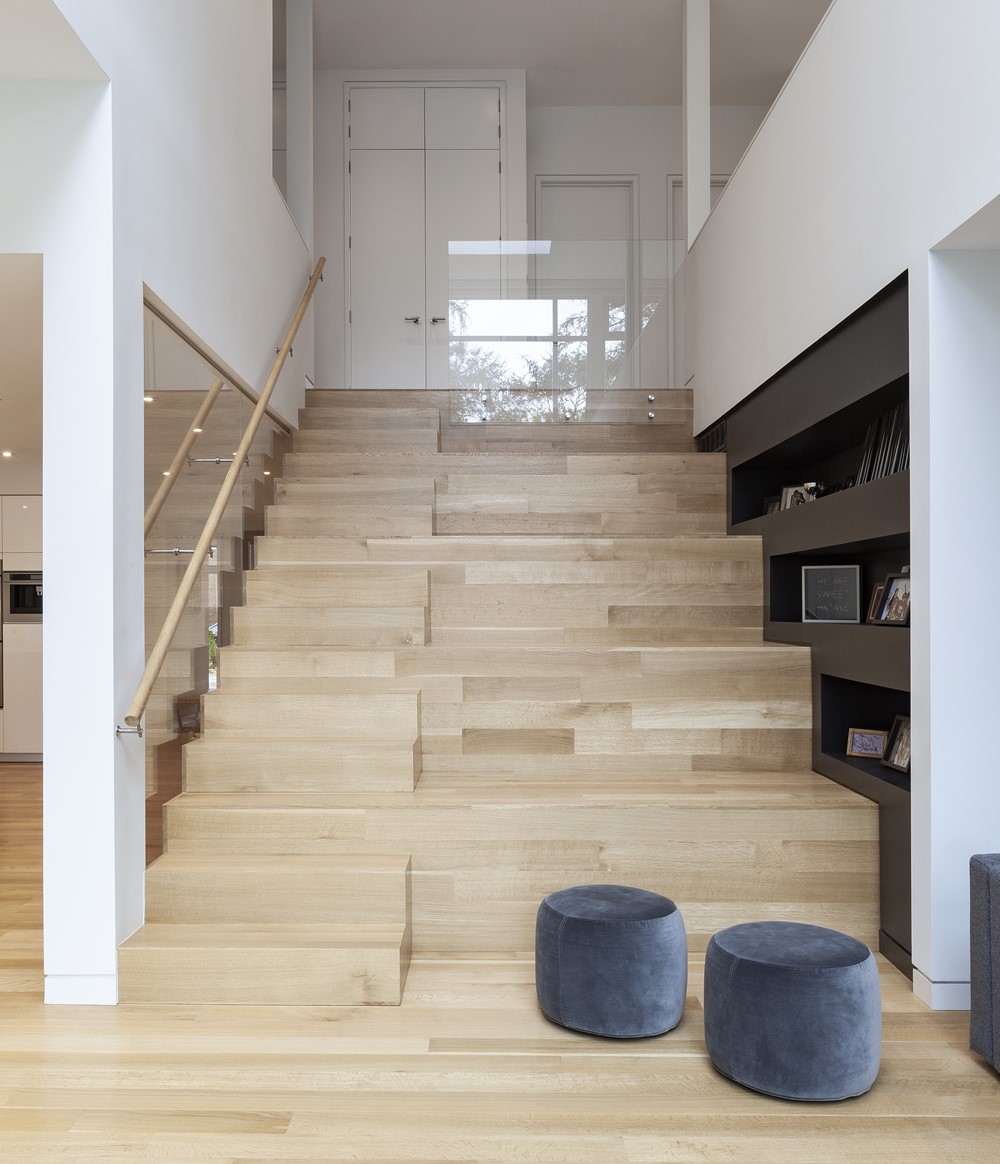 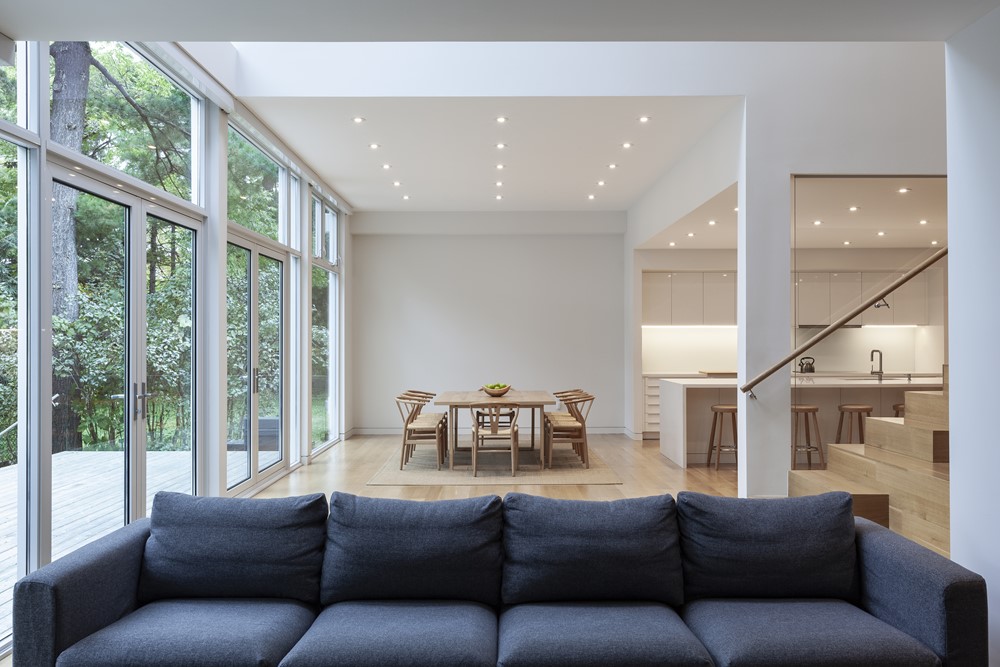 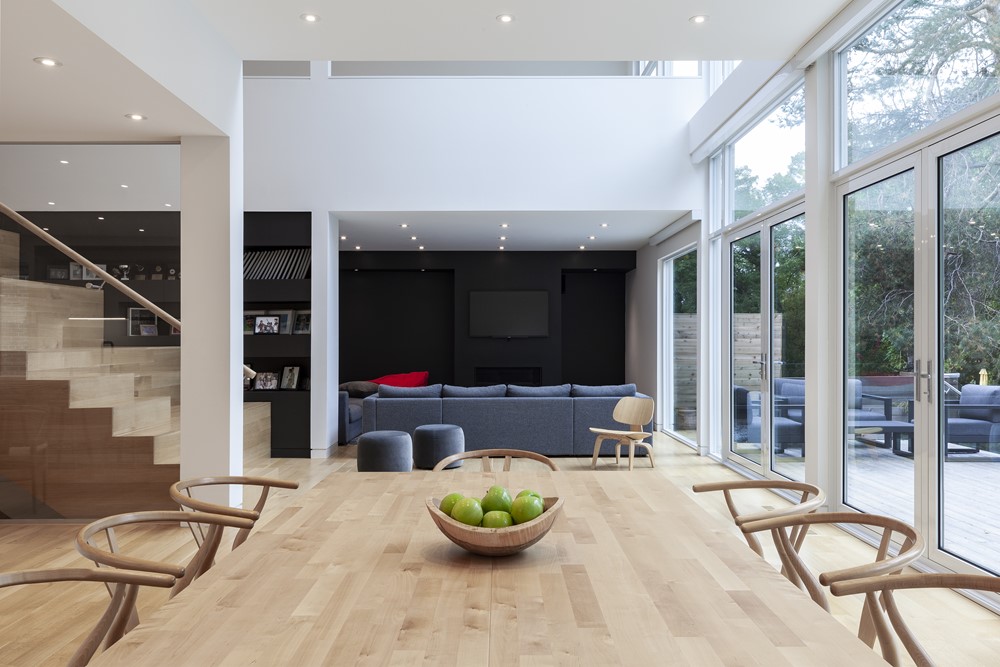 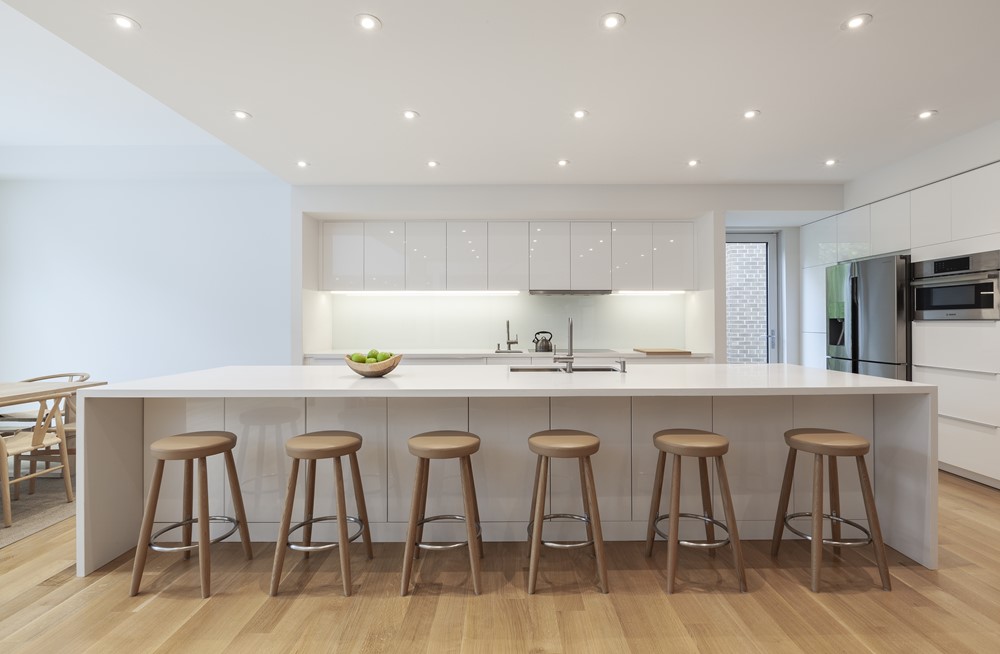 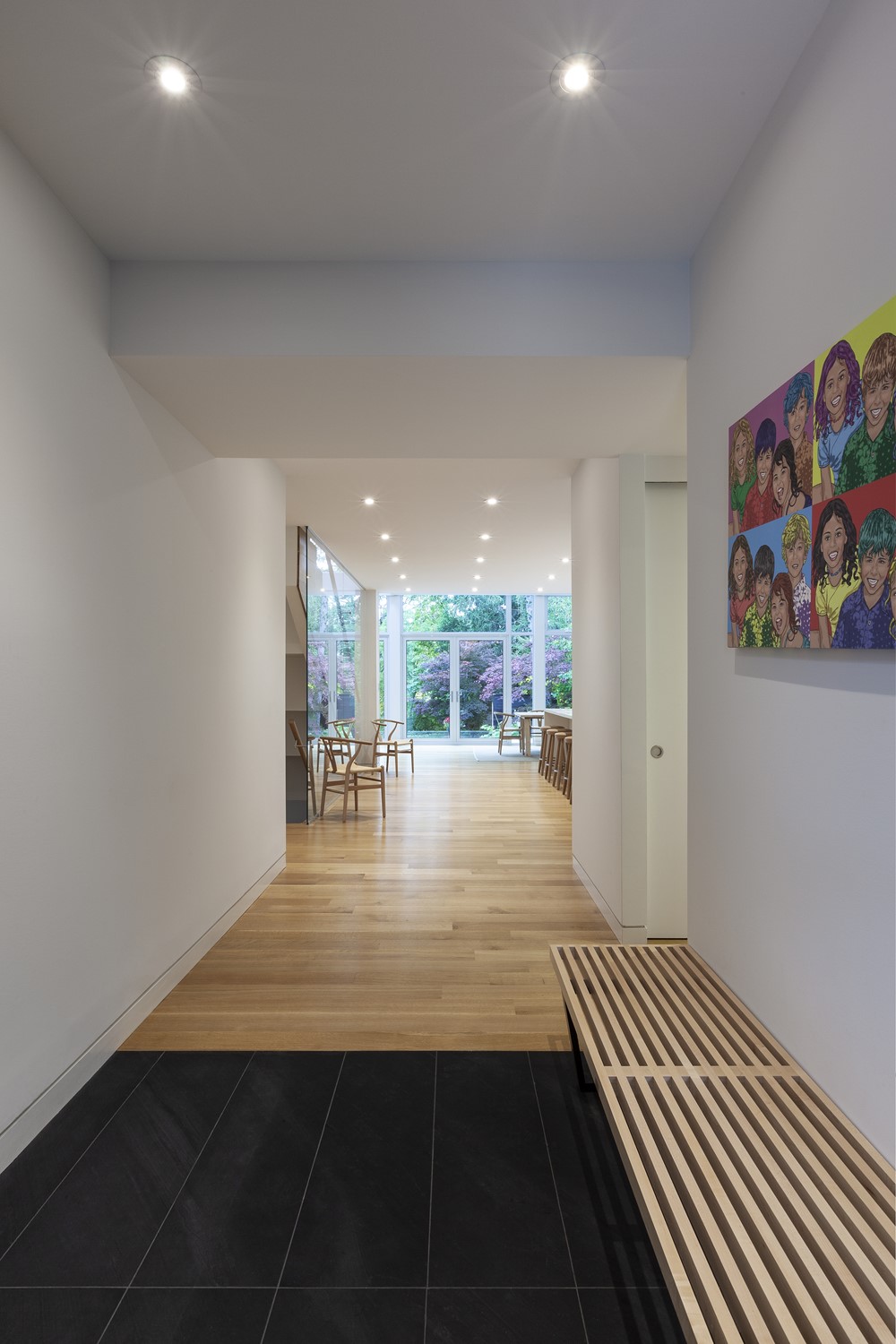 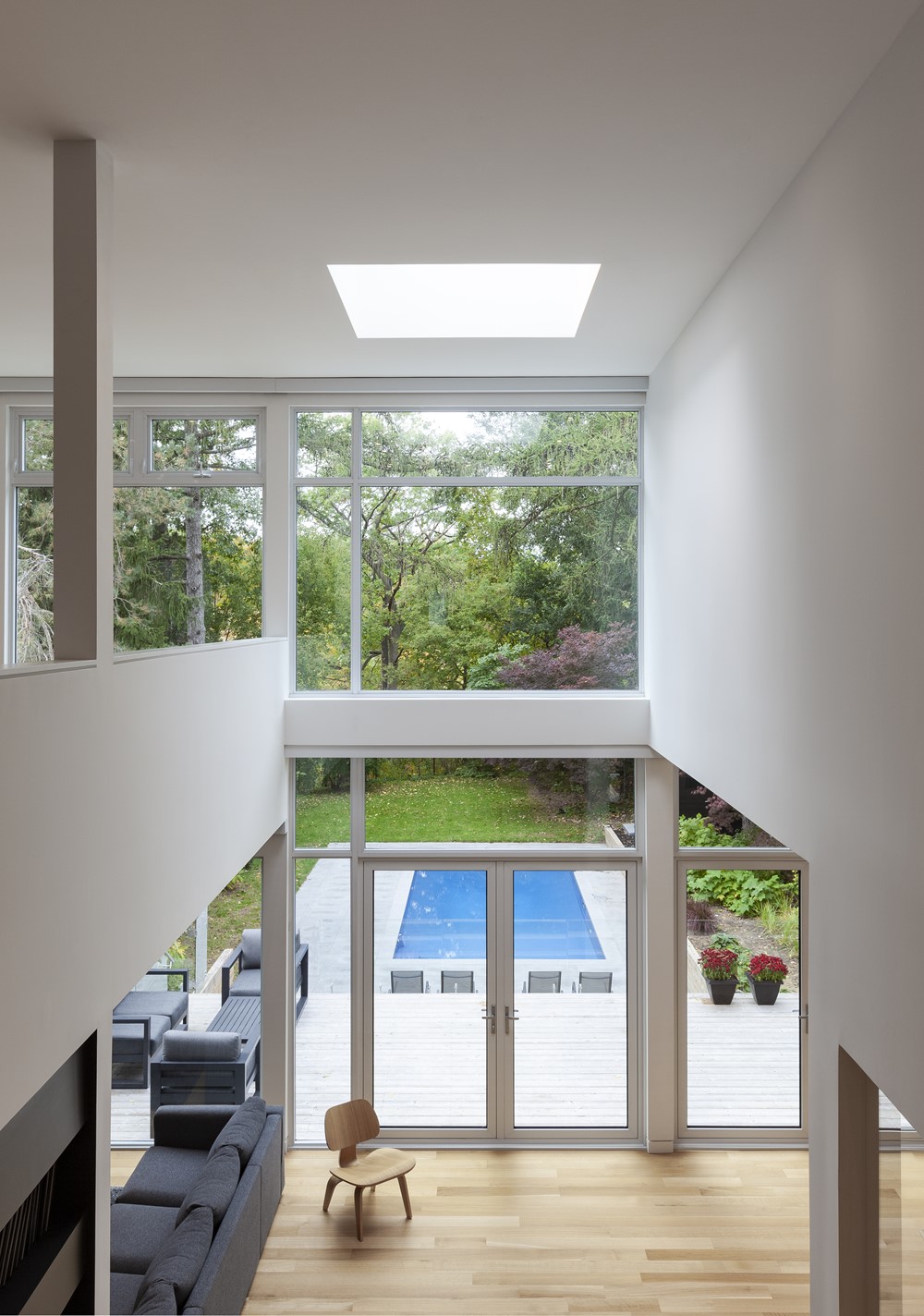 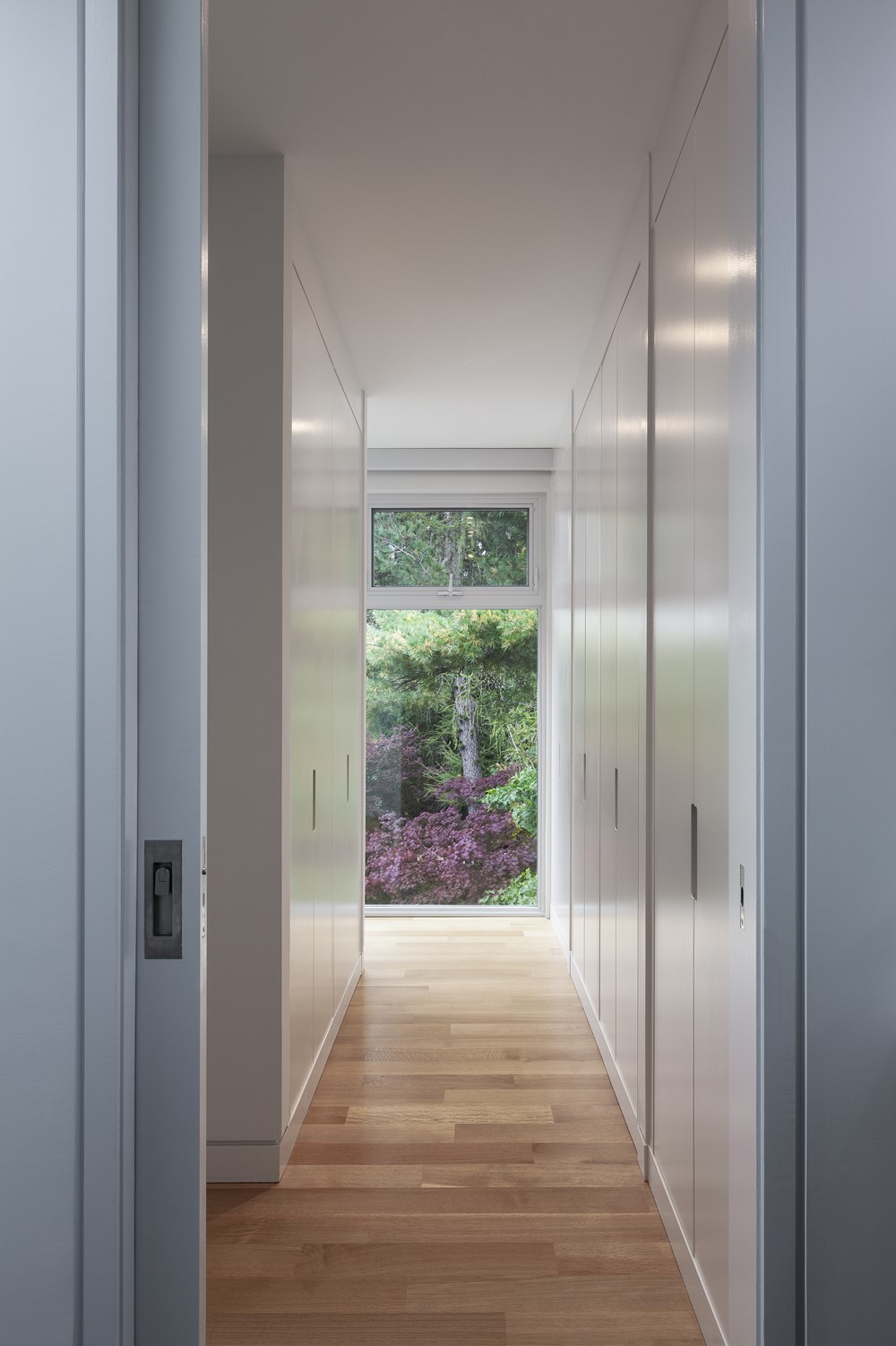 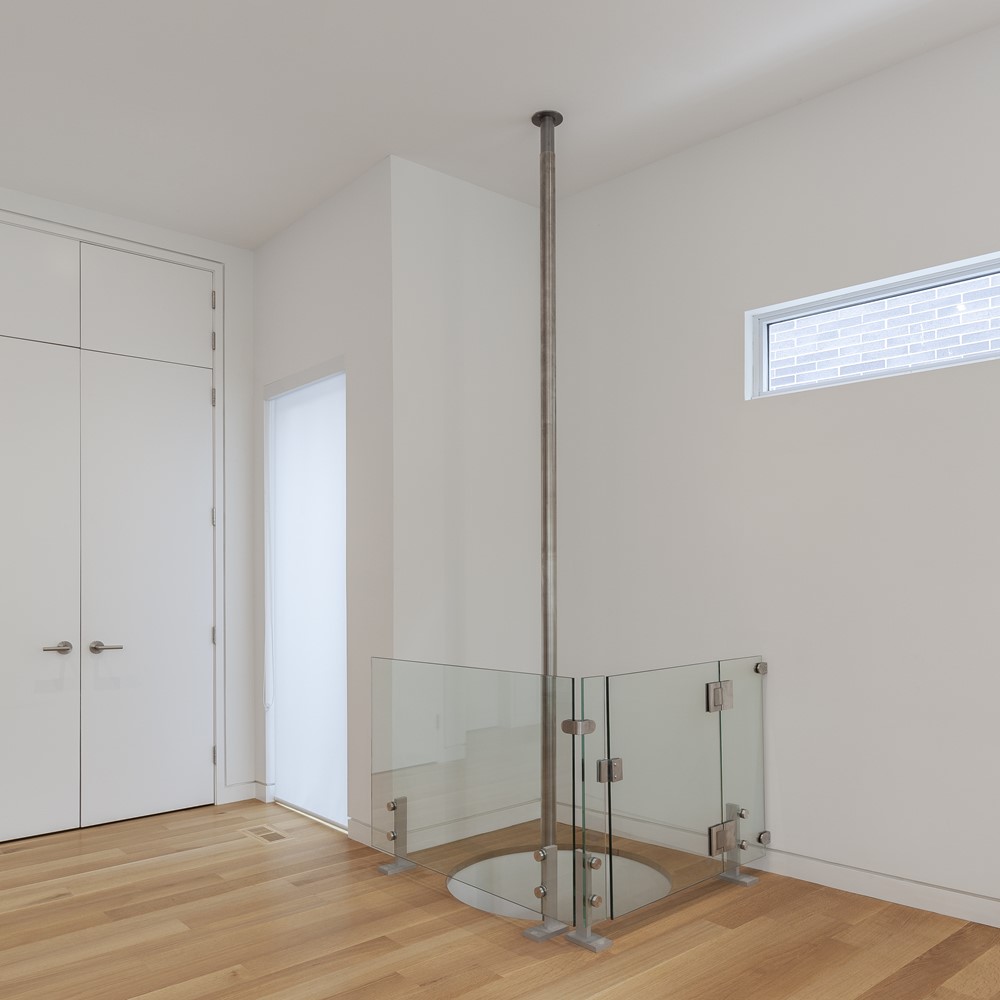 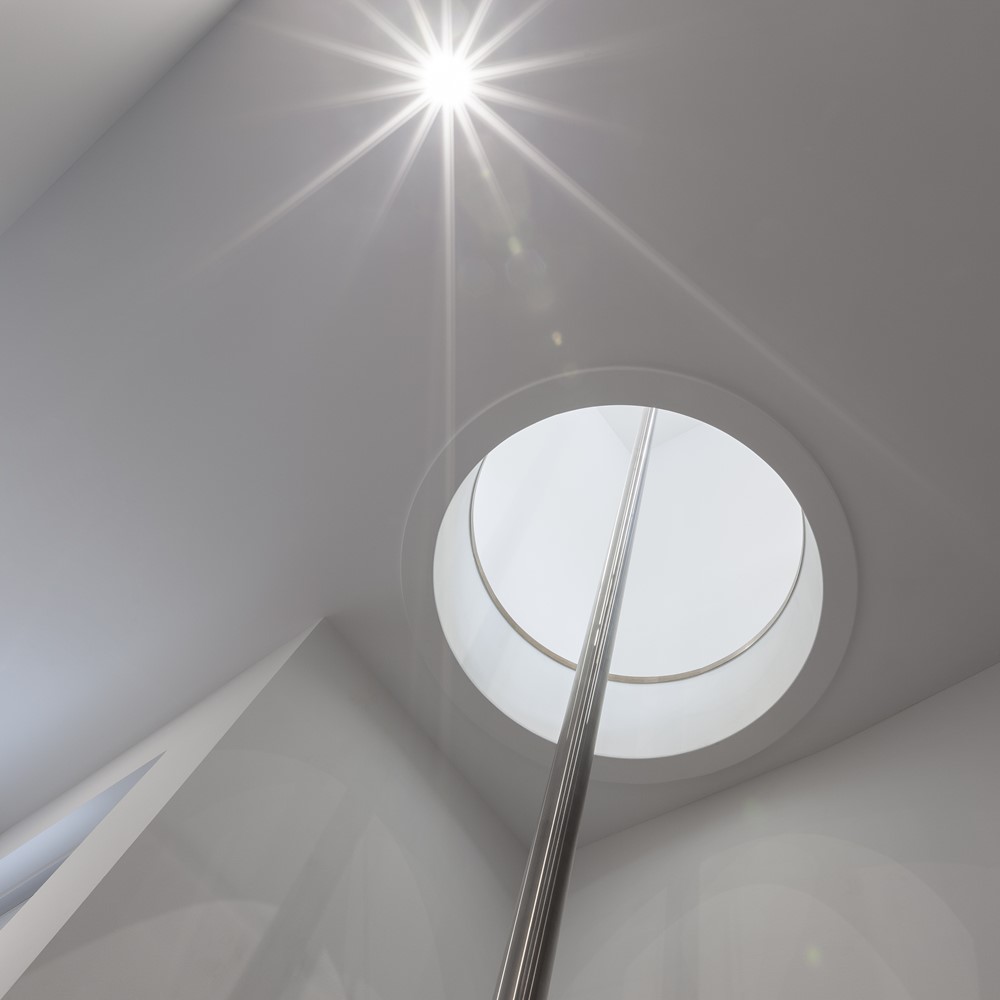 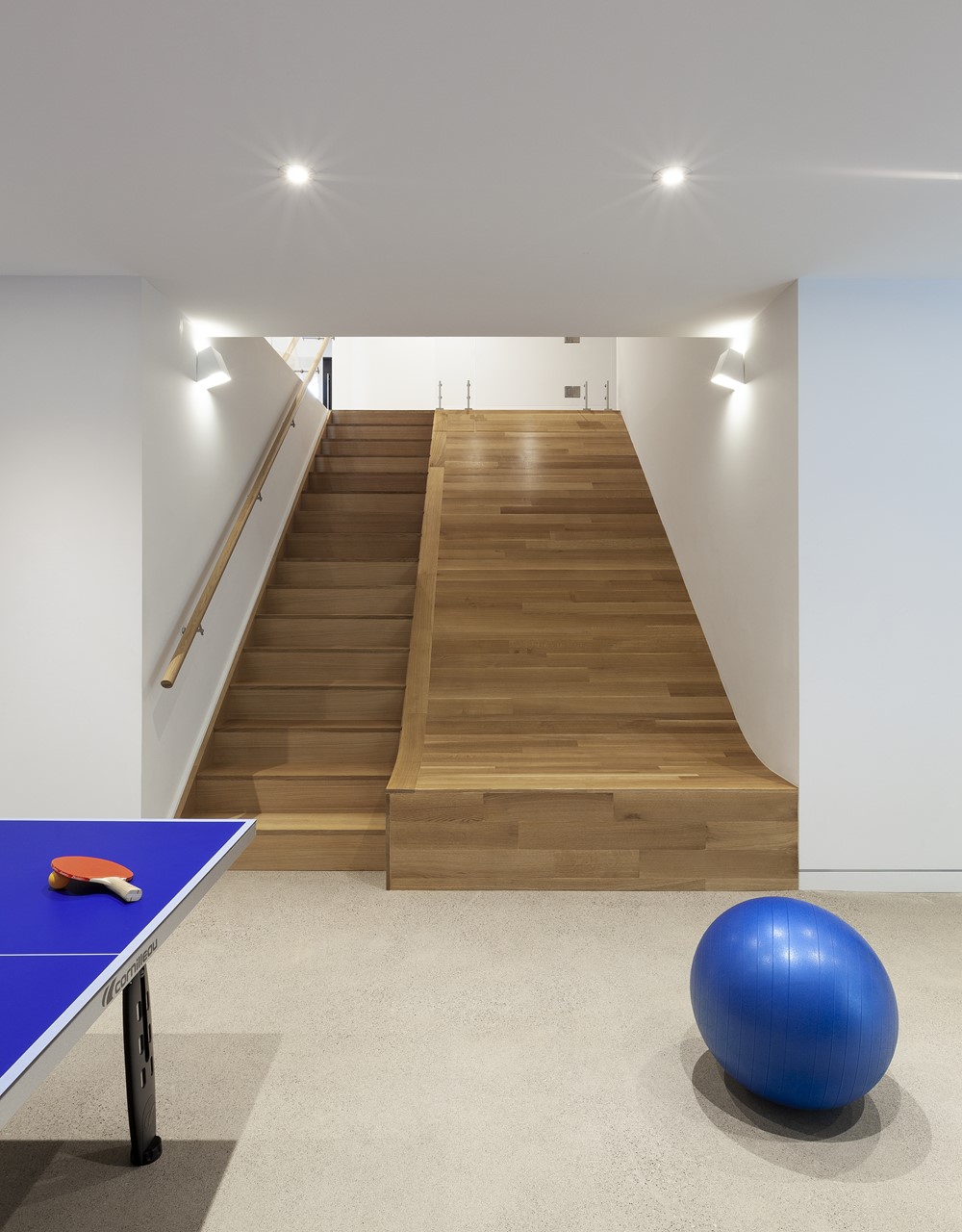 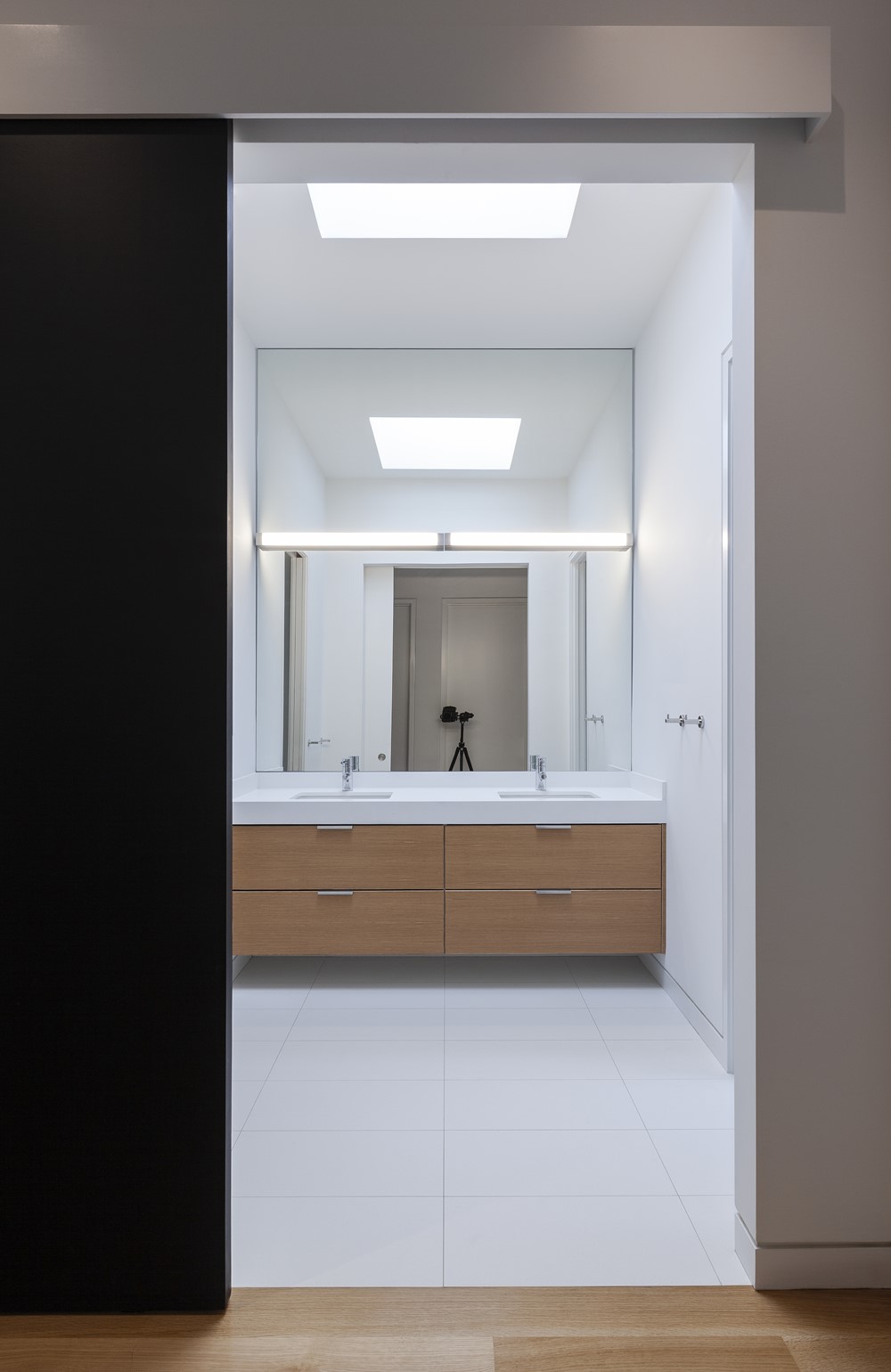 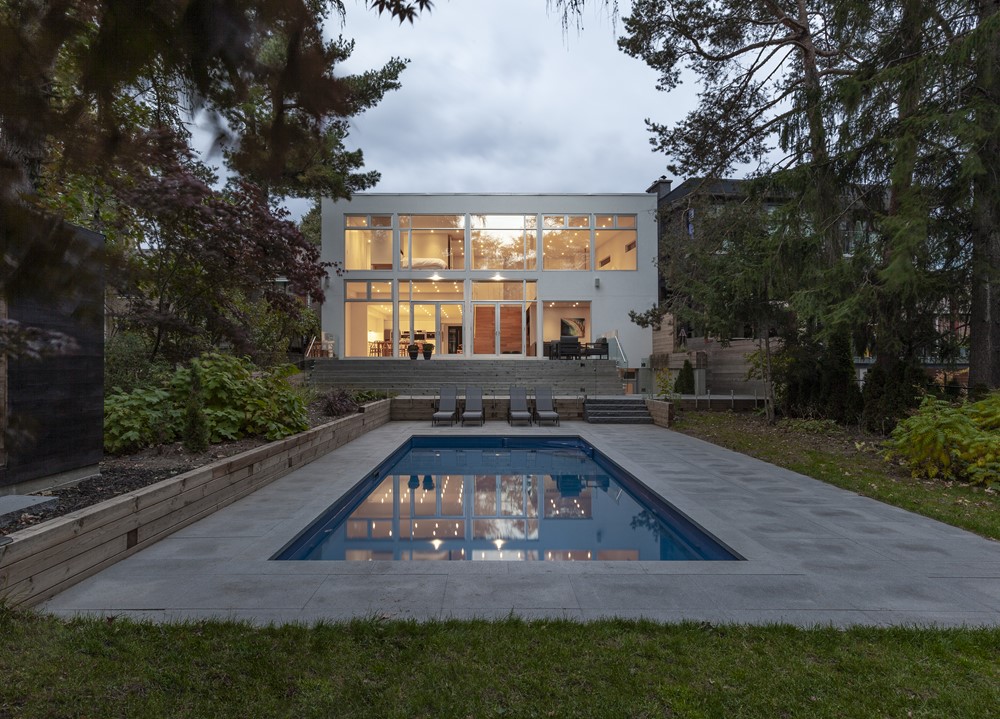 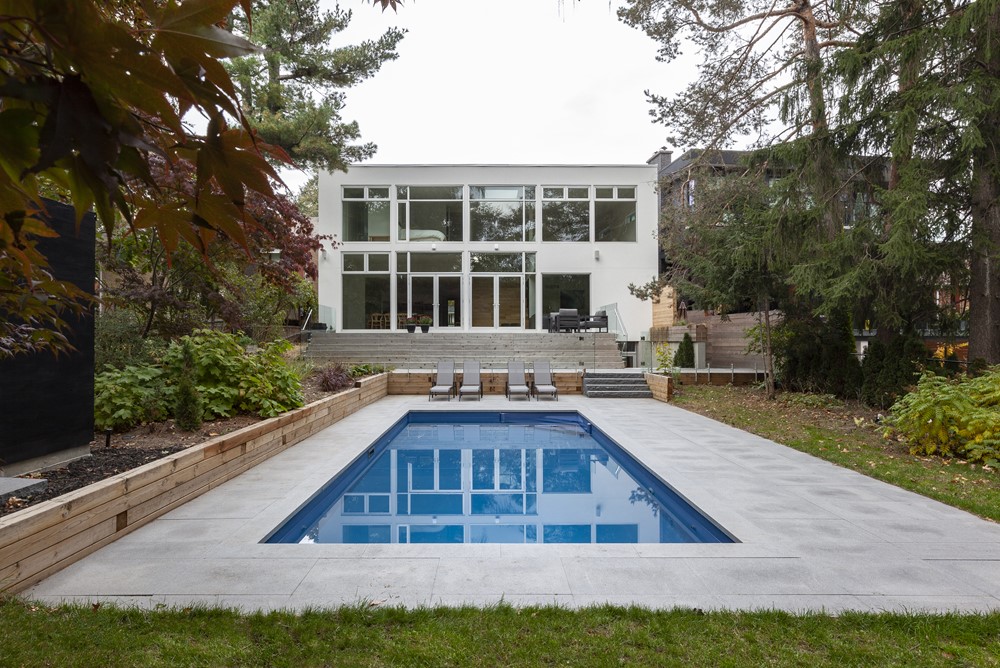 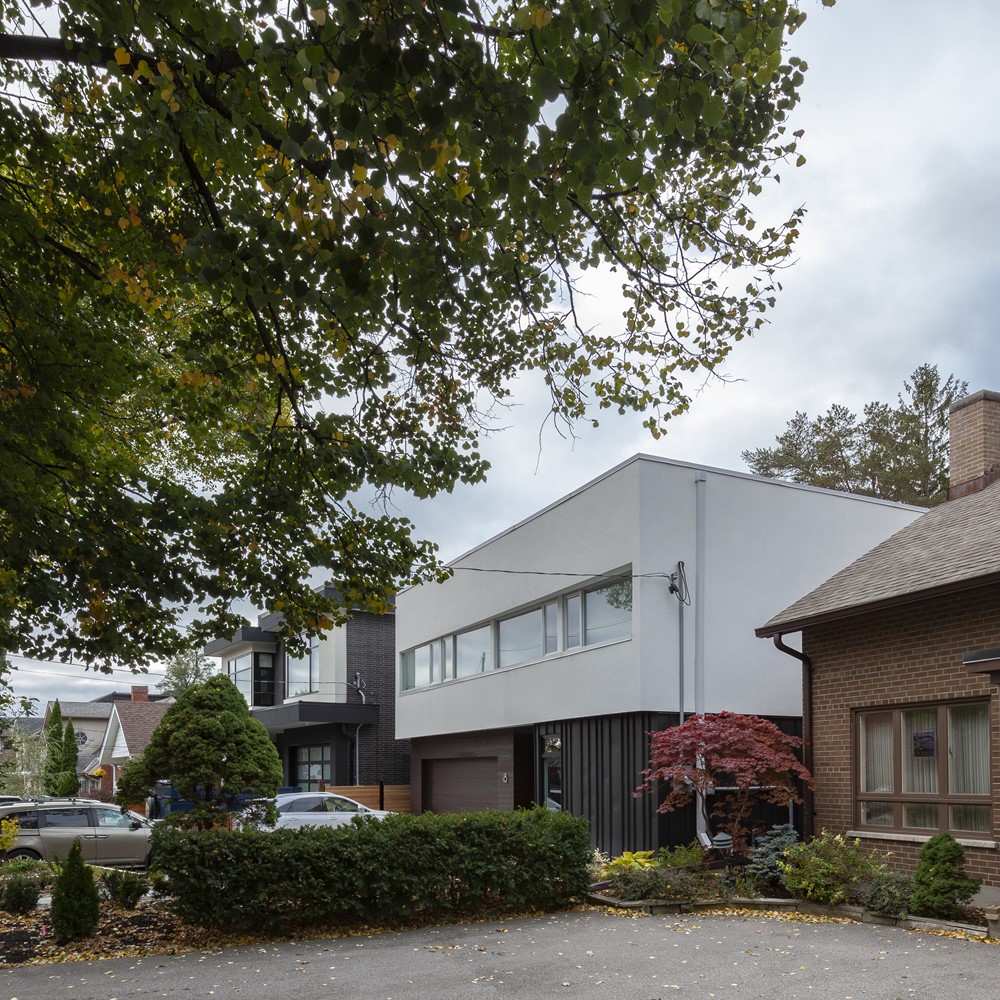 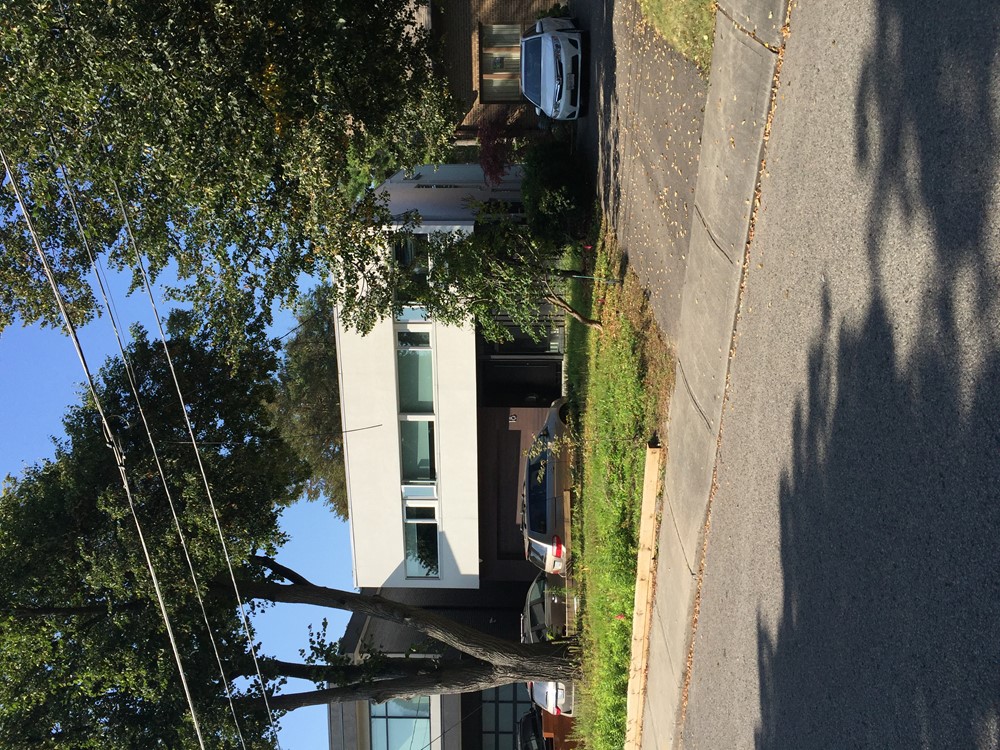 Located in East York, in the greenbelt next to the Don River Ravine, the house is framed by a deep trapezoidal site that has a ravine park in the rear and a curved street in the front, and by the clients who demand an active family life. Respecting the lot, the regulations, and the programs, it is divided by the main and side corridors crossing each other perpendicularly at the center into four quarters, which are further subdivided according to the programs of each floor. The rear half is defined as a trapezoid, derived from the shape of the lot, which amplifies the space towards the ravine, its view through the double-story glass wall. On the other hand, the front half is defined as a clean rectangle, in order to subdivide the space rigidly and democratically as in the four children’s bedrooms on the second floor.
At the intersection of the two perpendicular corridors on the first floor, a double-height space with the stair benches facing the ravine acts as an agora. At this gathering point, the boundaries between the second floor and the first, the ravine and the house, the public and the private are obscured, allowing one to perceive the entire house and the nature simultaneously. In more intimate moments, playground elements are introduced to suggest multiple itineraries between spaces. Underneath the agora, a wide sliding floor connects the first floor to the basement, transitioning one emotionally to where one can practice many active hobbies. At the corner of the study room on the second floor, a firepole offers a secretive shortcut to the mud/locker room and the adjacent side entrance on the first floor.
Amongst the typical Torontonian houses that lack any sort of interaction with the site and/or the inhabitants, the Fun House realizes playful coexistence between the two. It demonstrates to its adjacent neighborhoods and beyond that a good architecture does not simply occupy but becomes part of and contribute to what was existing.
Project credits: