This four bedroom apartment was redesigned by Maya Sheinberger and renovated for a young couple, a graphic designer and a programmer, as they were expecting their first baby, who was born during the project. They decided to leave the heart and center of Tel Aviv, along with their cat and two dogs, in favor of one of the quieter northern neighborhoods of the city. Before the renovation, the apartment was extremely old fashioned and the interior needed to be adjusted to the lifestyle of the young family, which requested an easy-going and warm atmosphere and a modern space filled with air and light. Photography by Itay Benit. 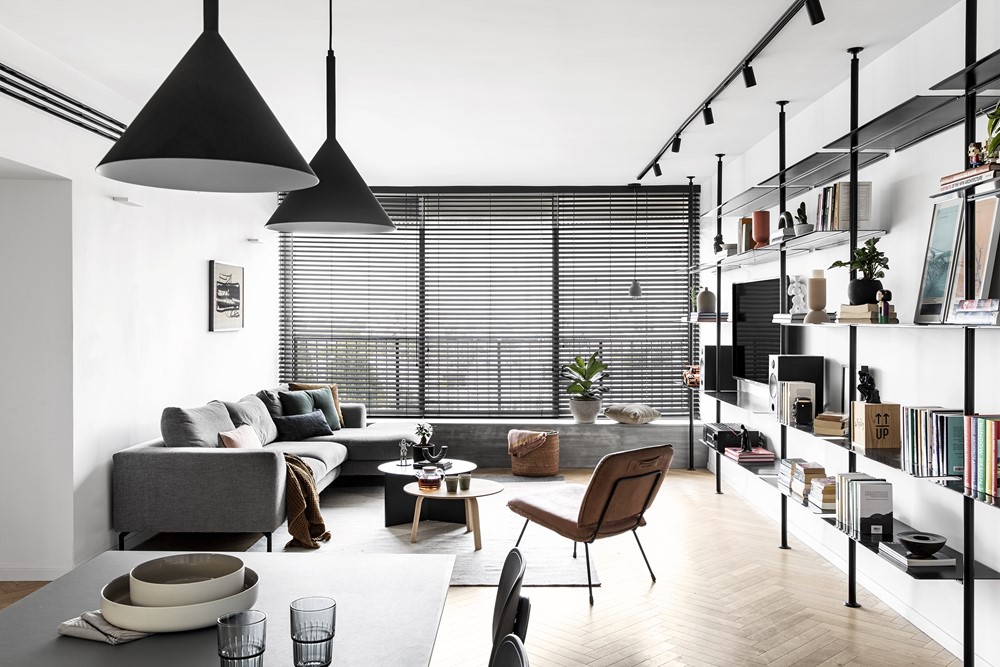 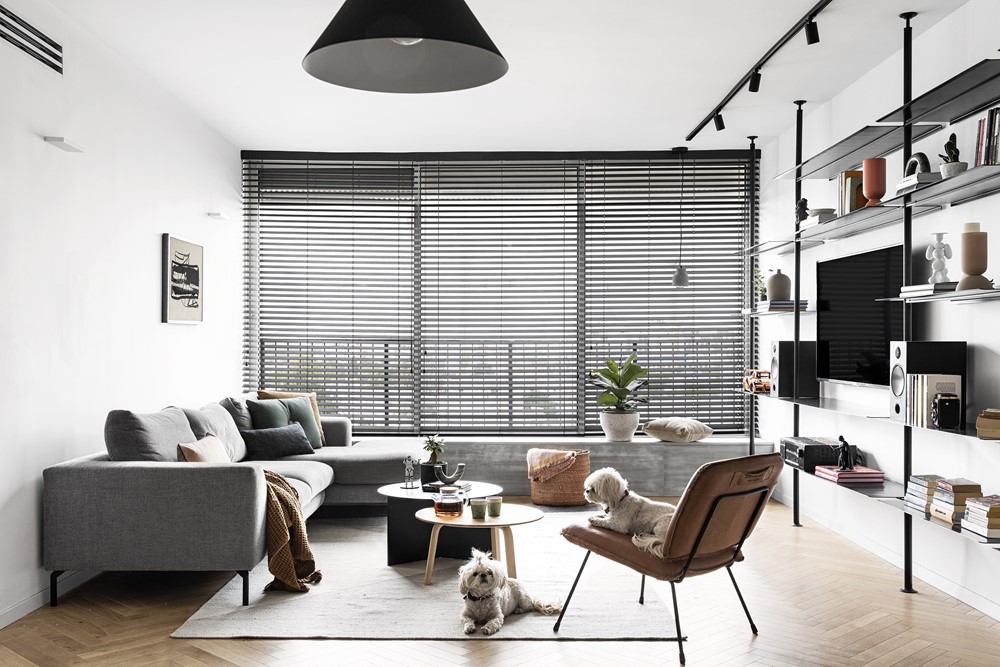 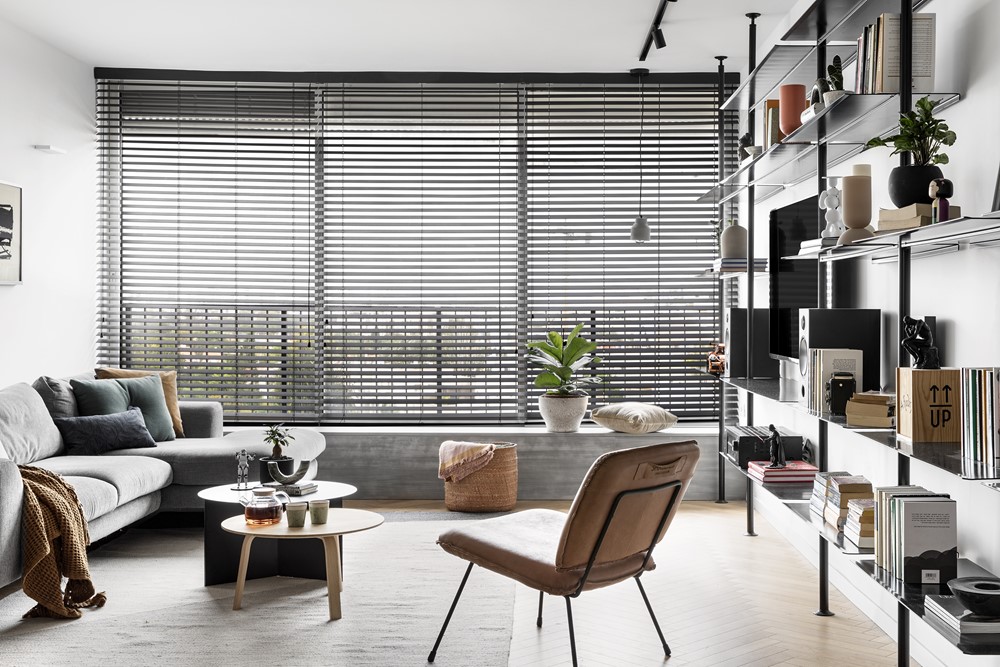 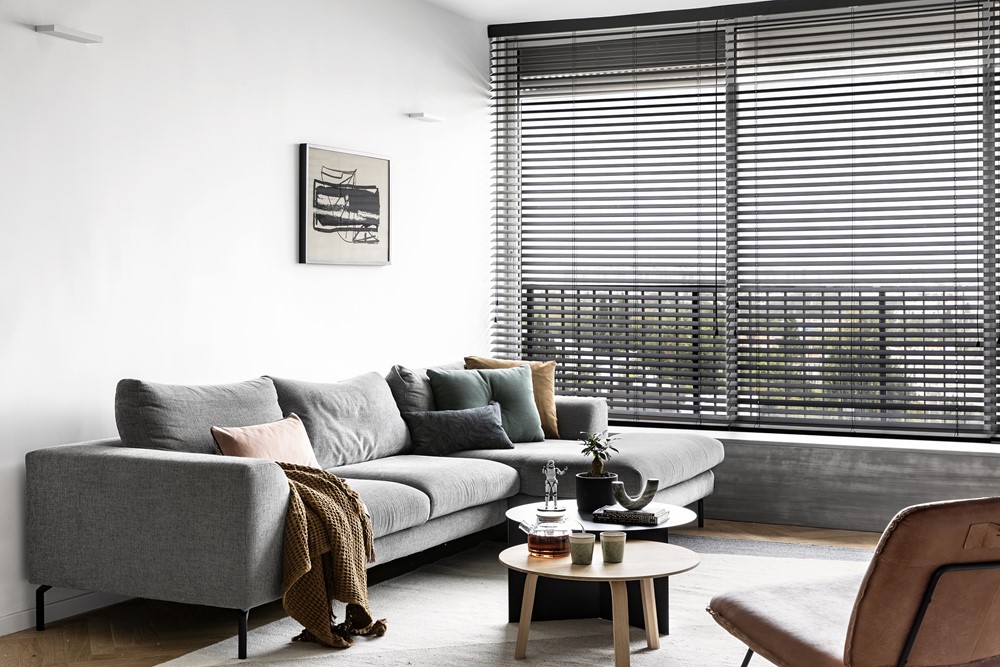 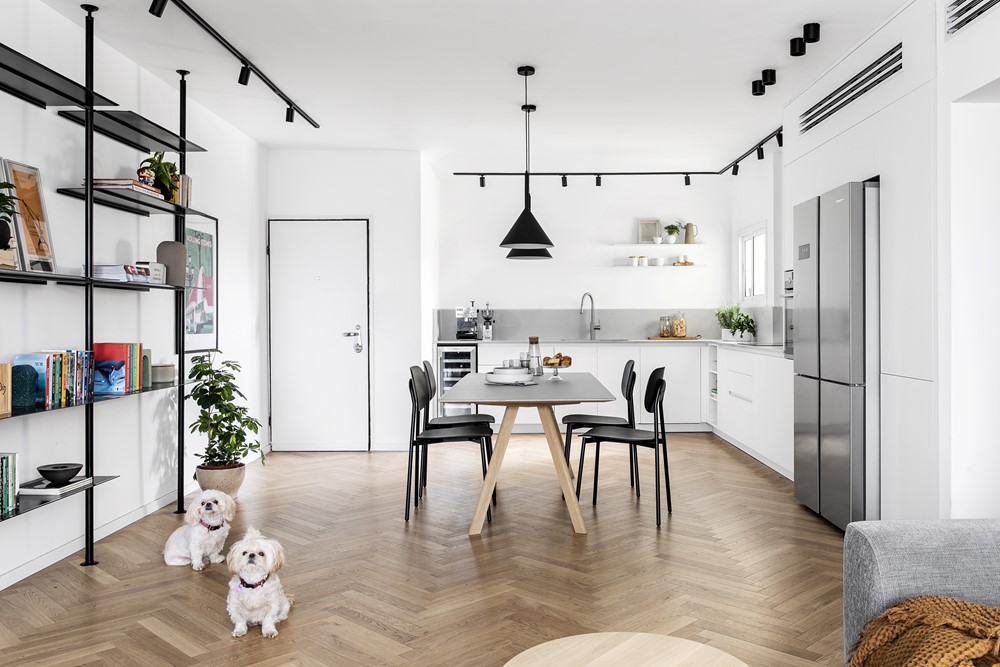 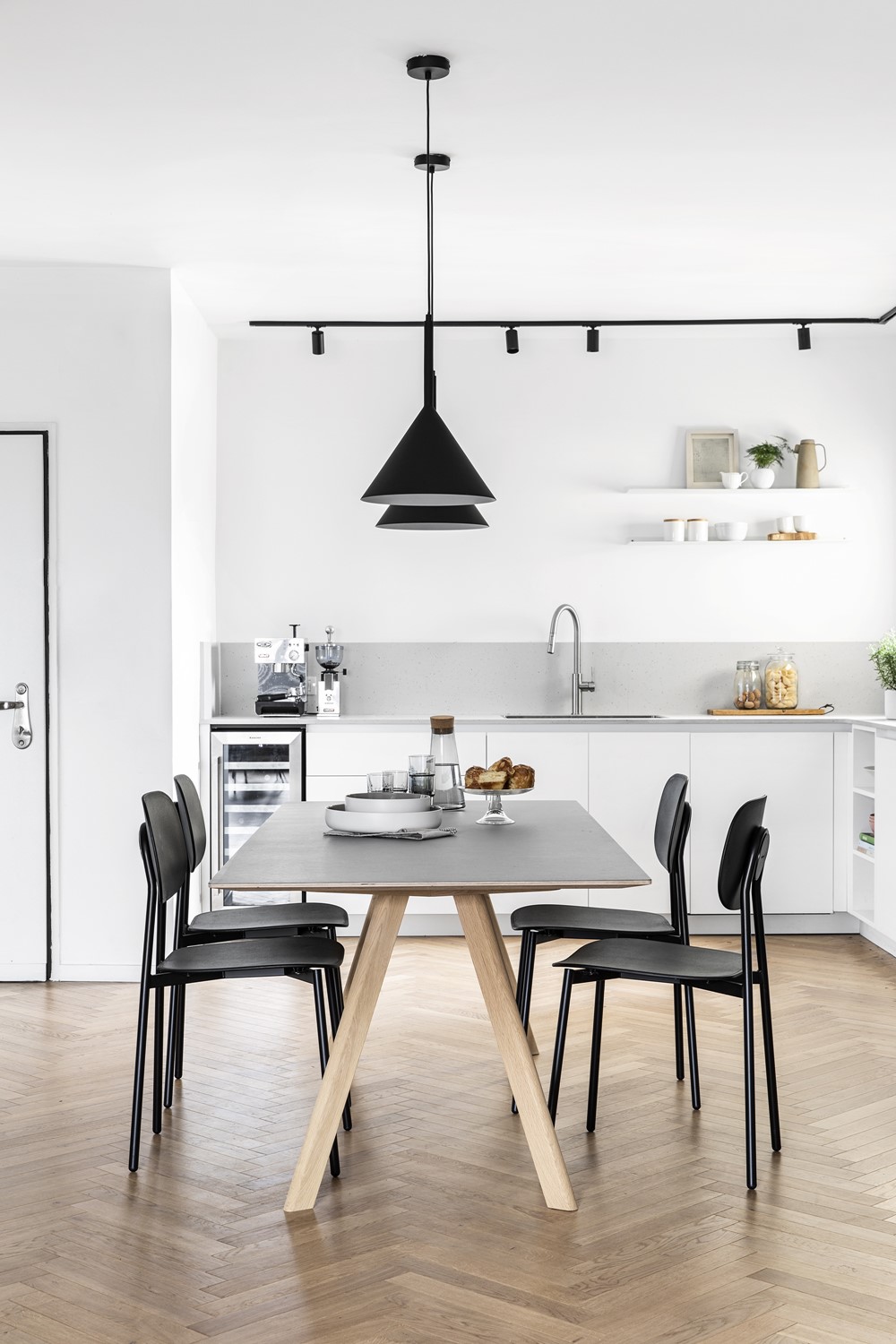 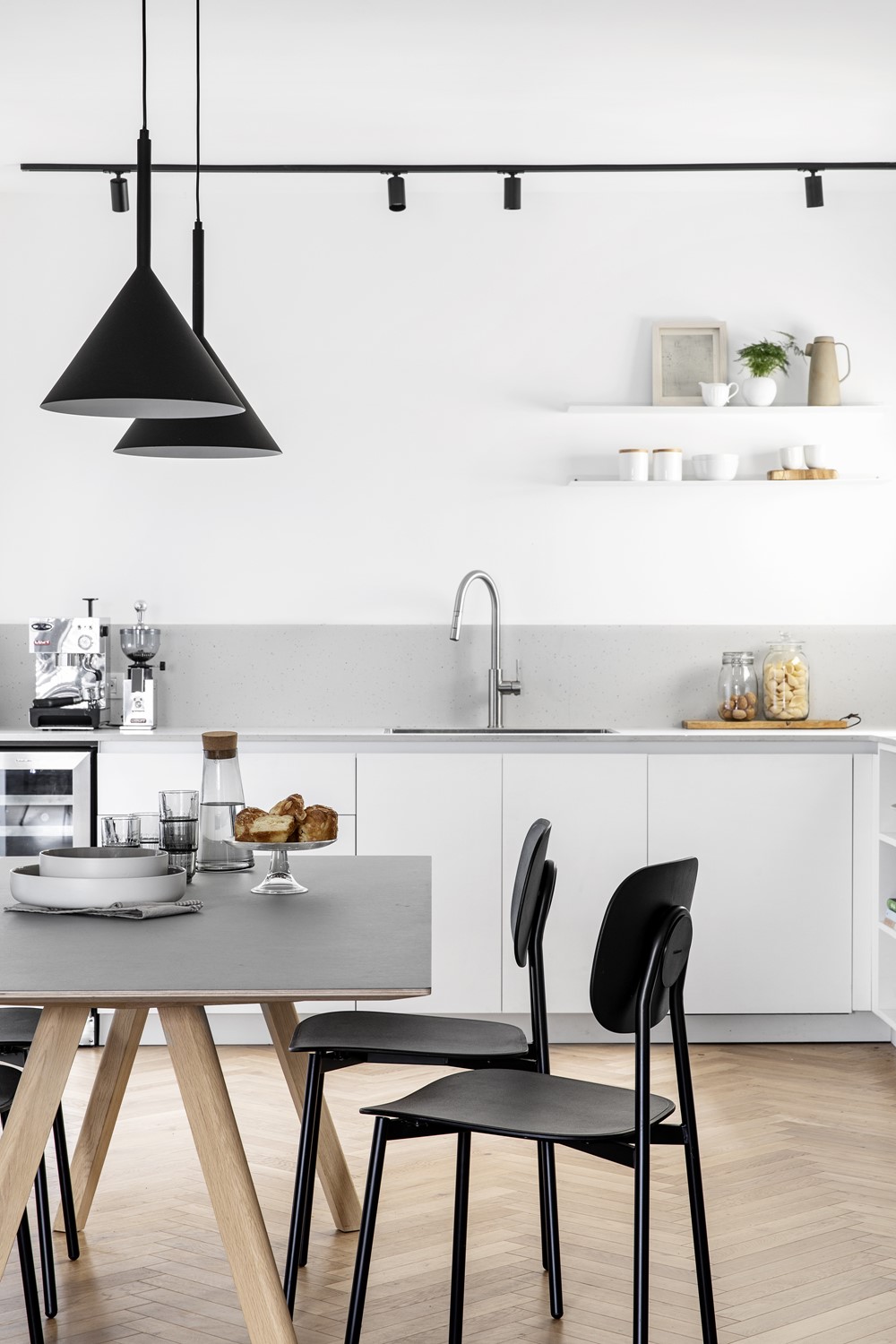 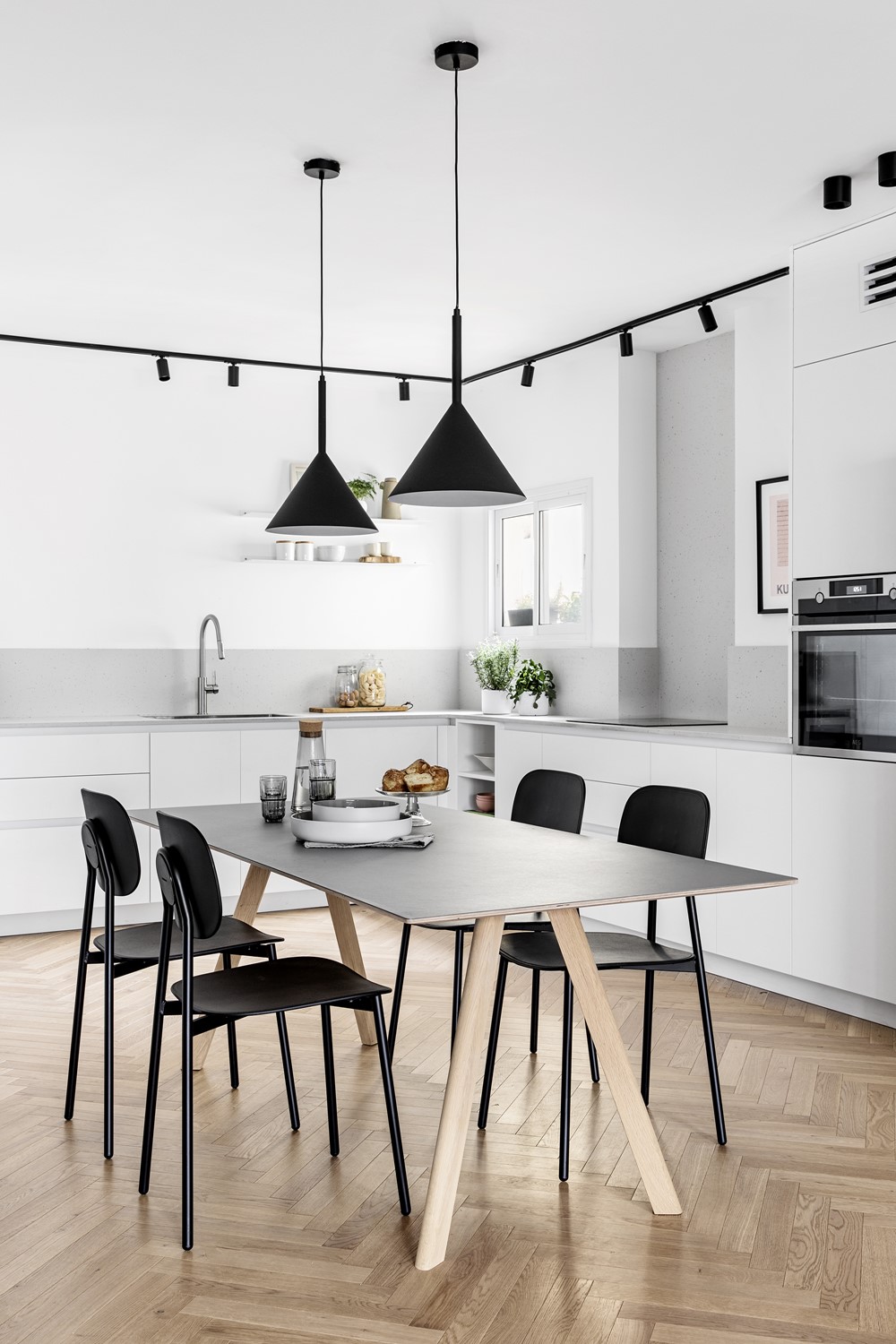 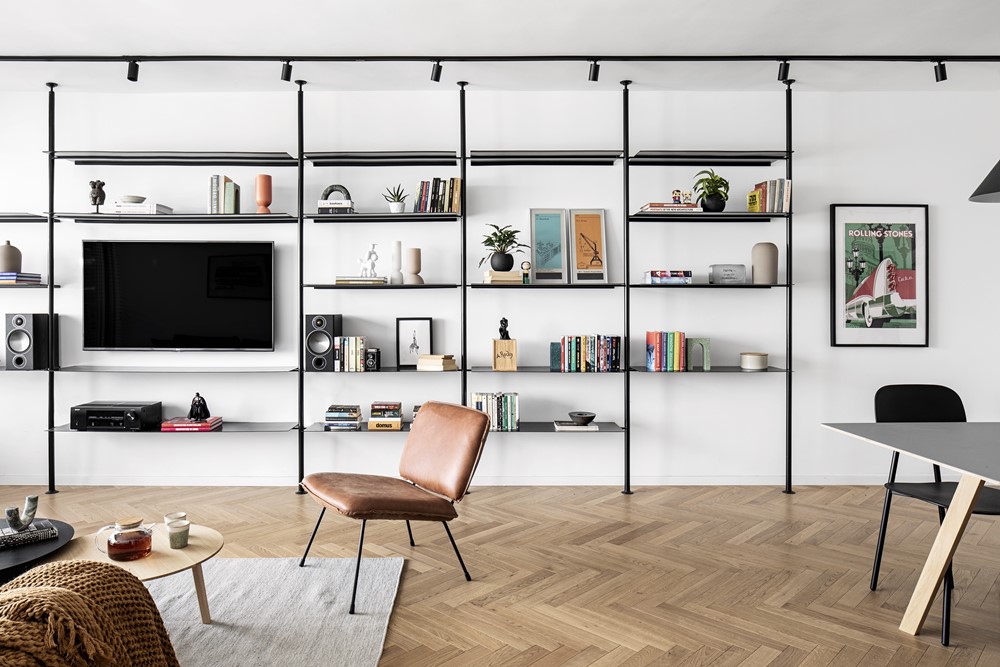 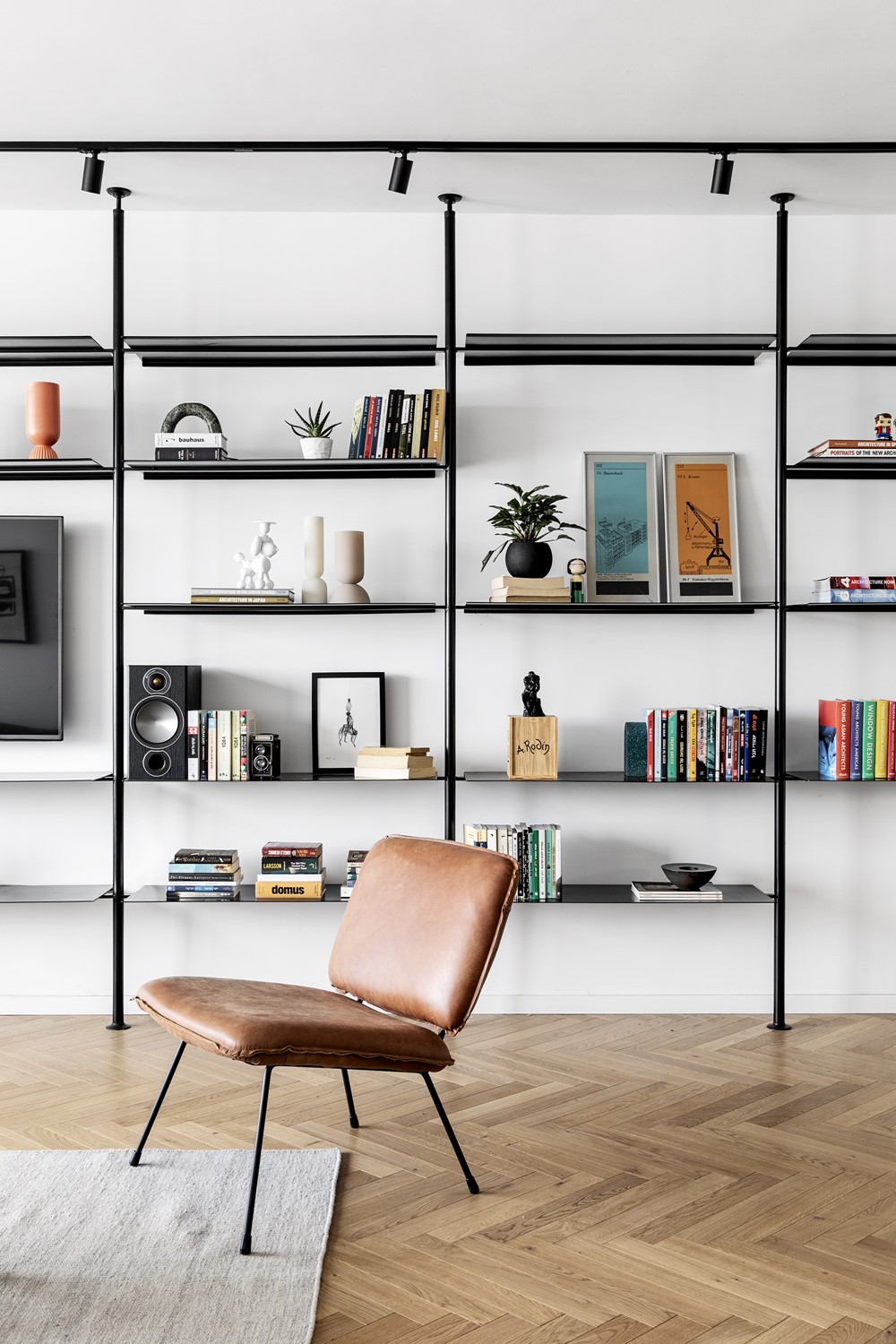 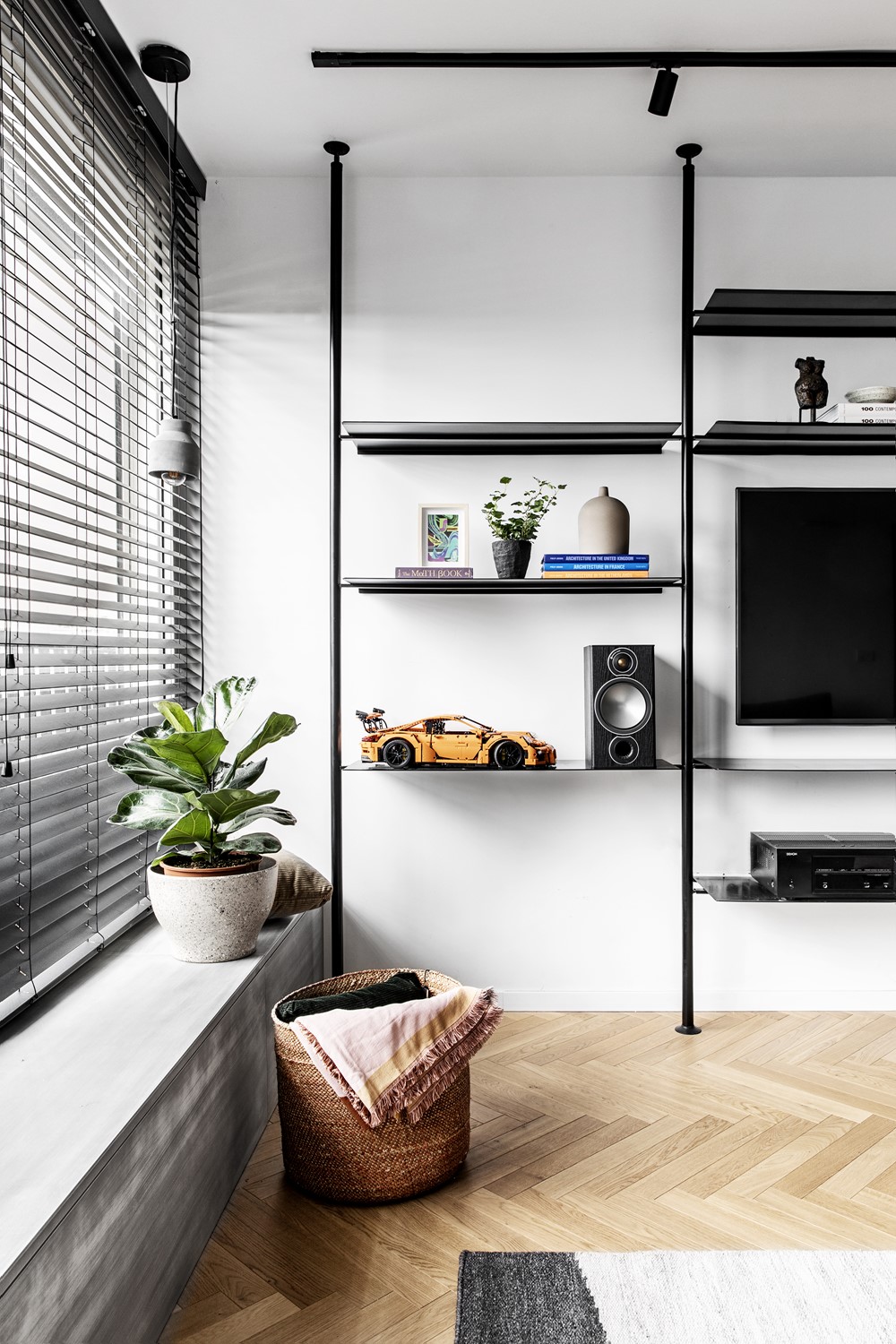 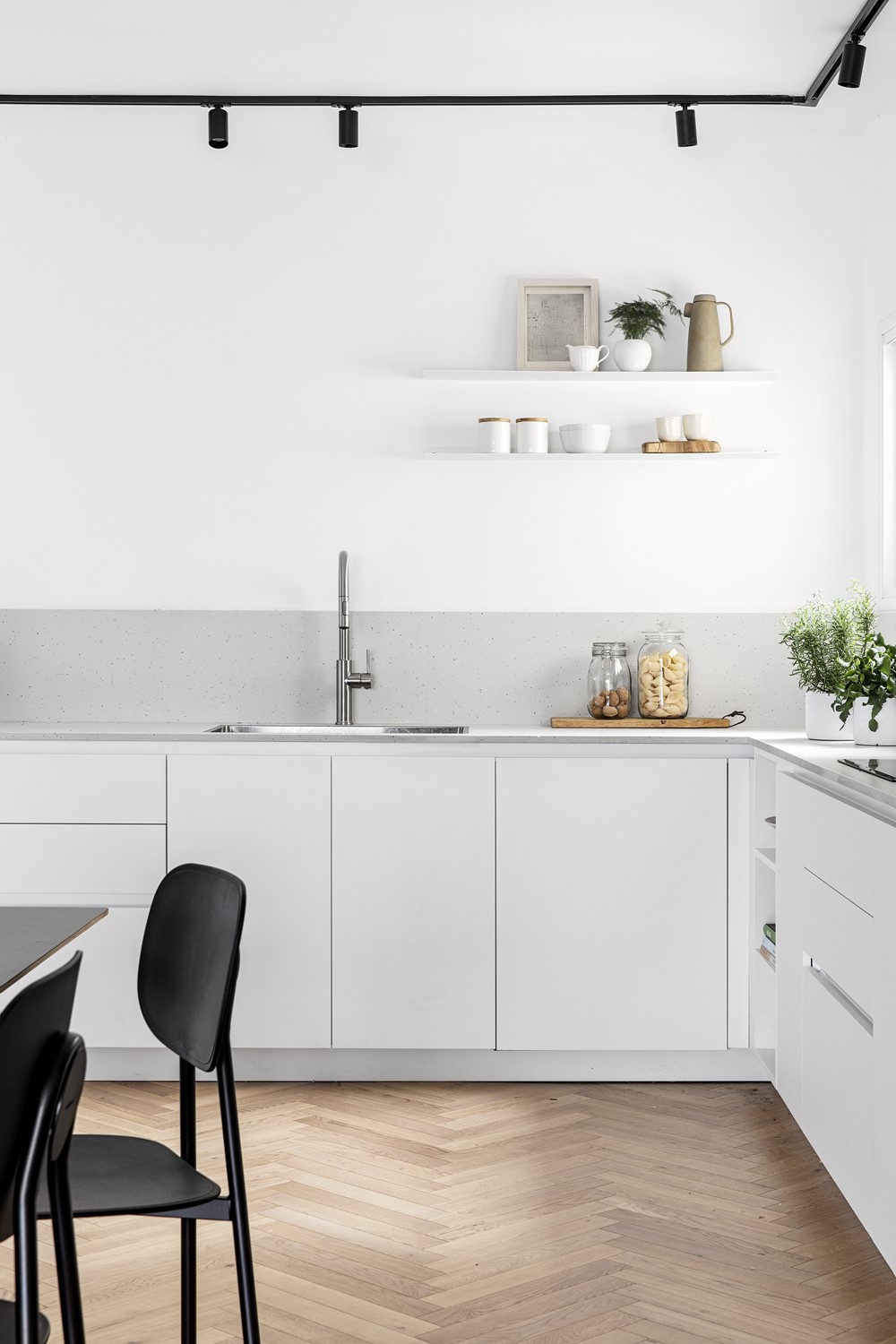 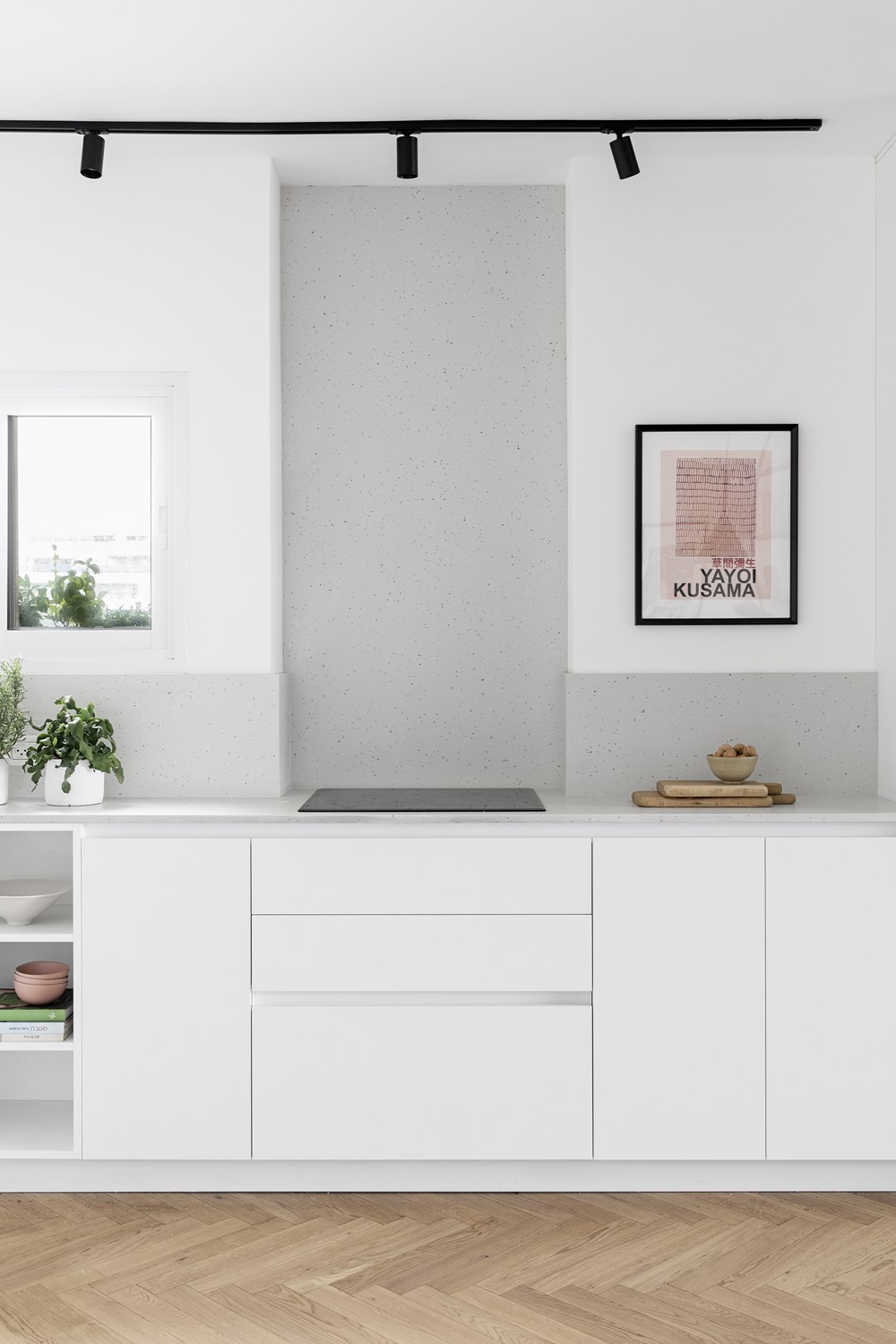 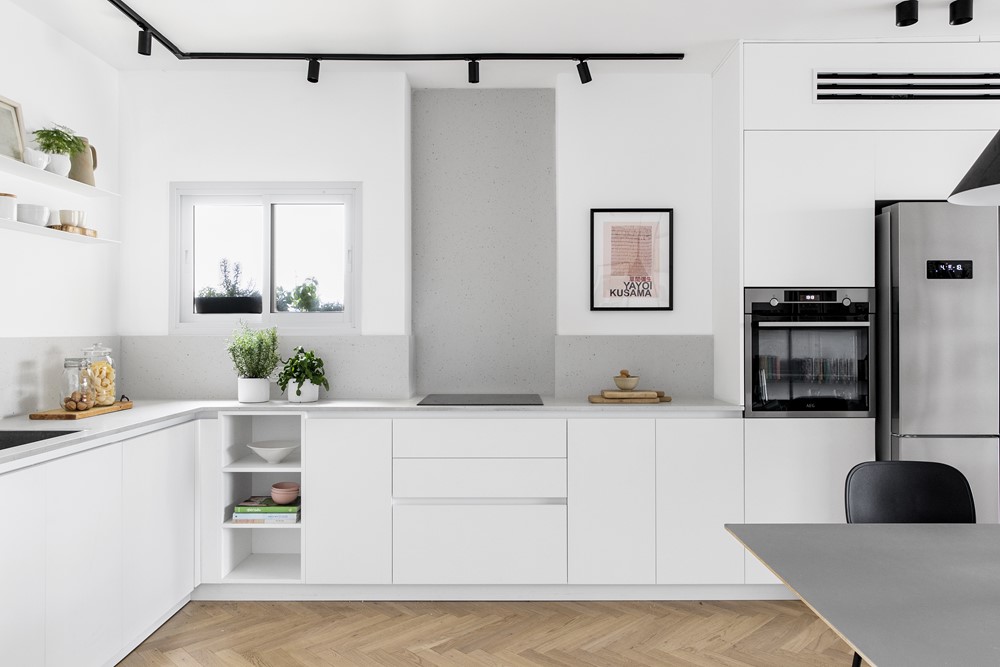 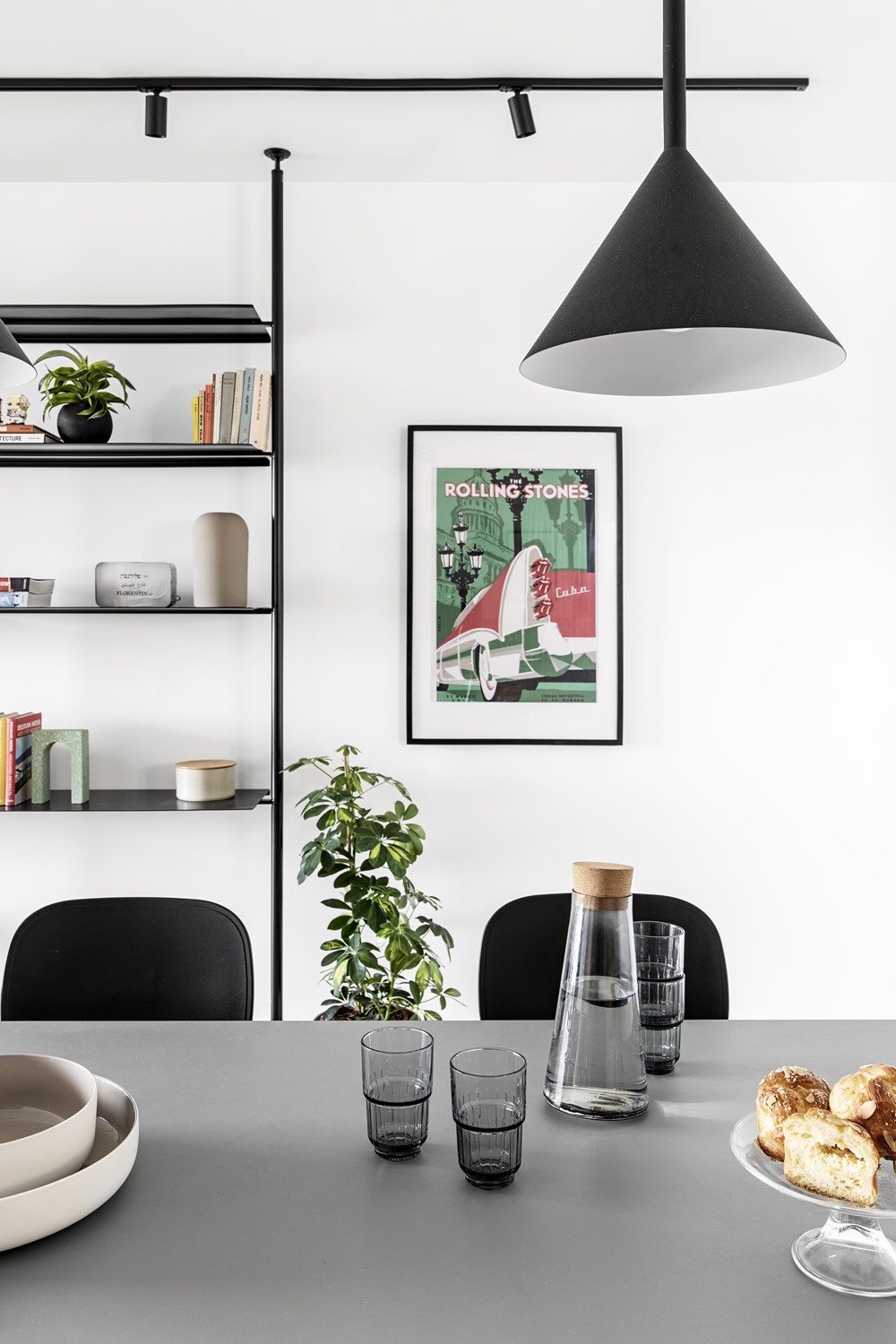 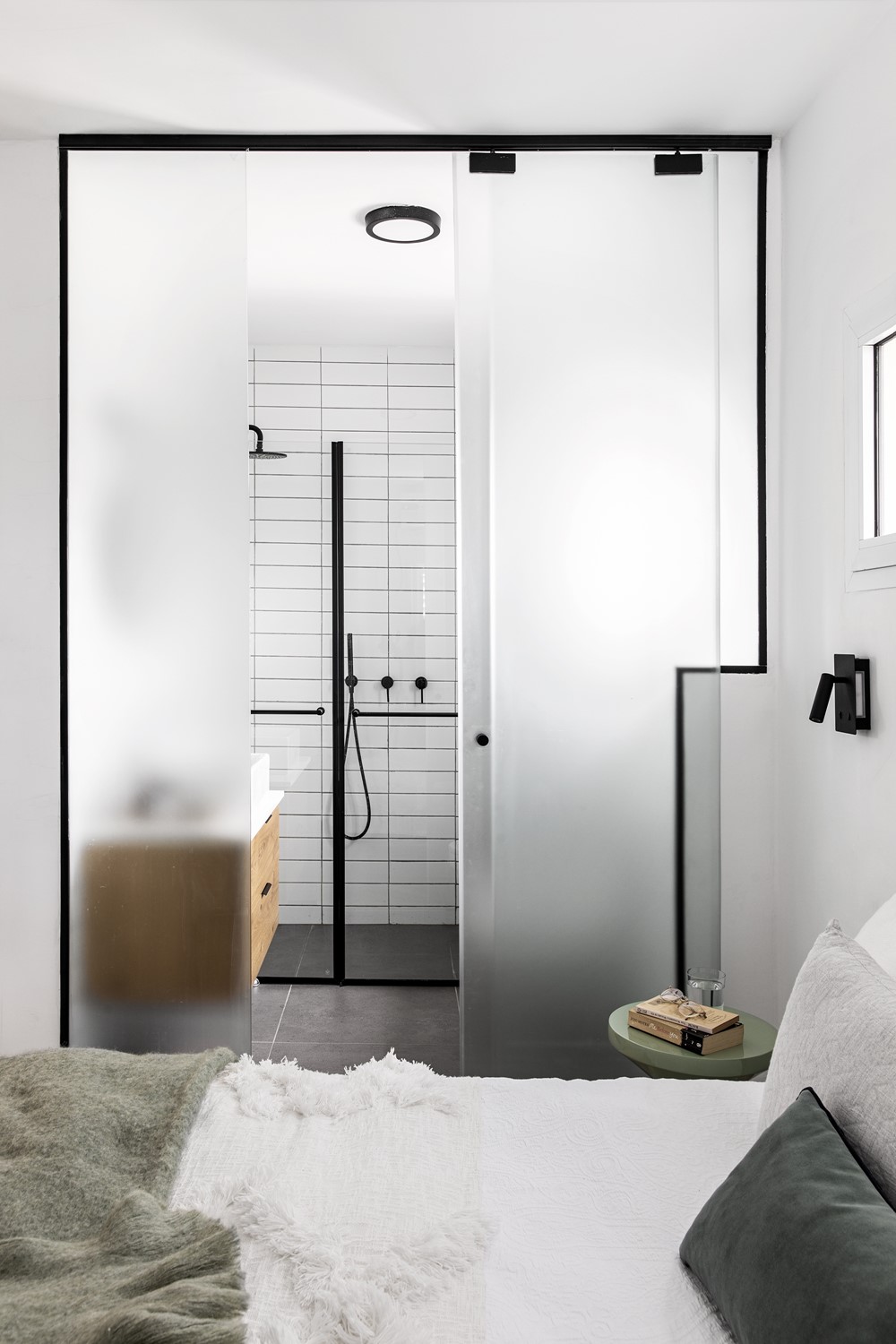 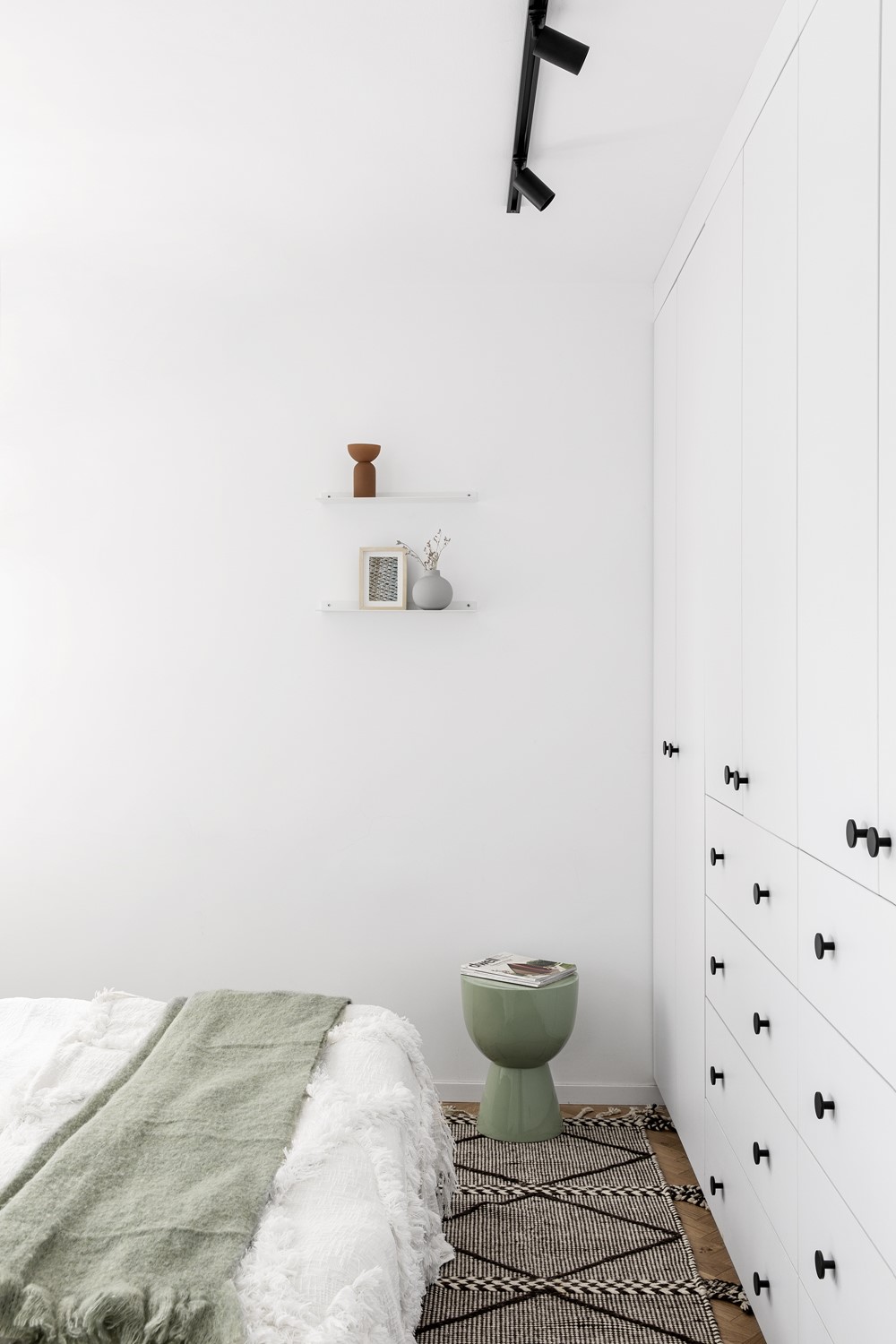 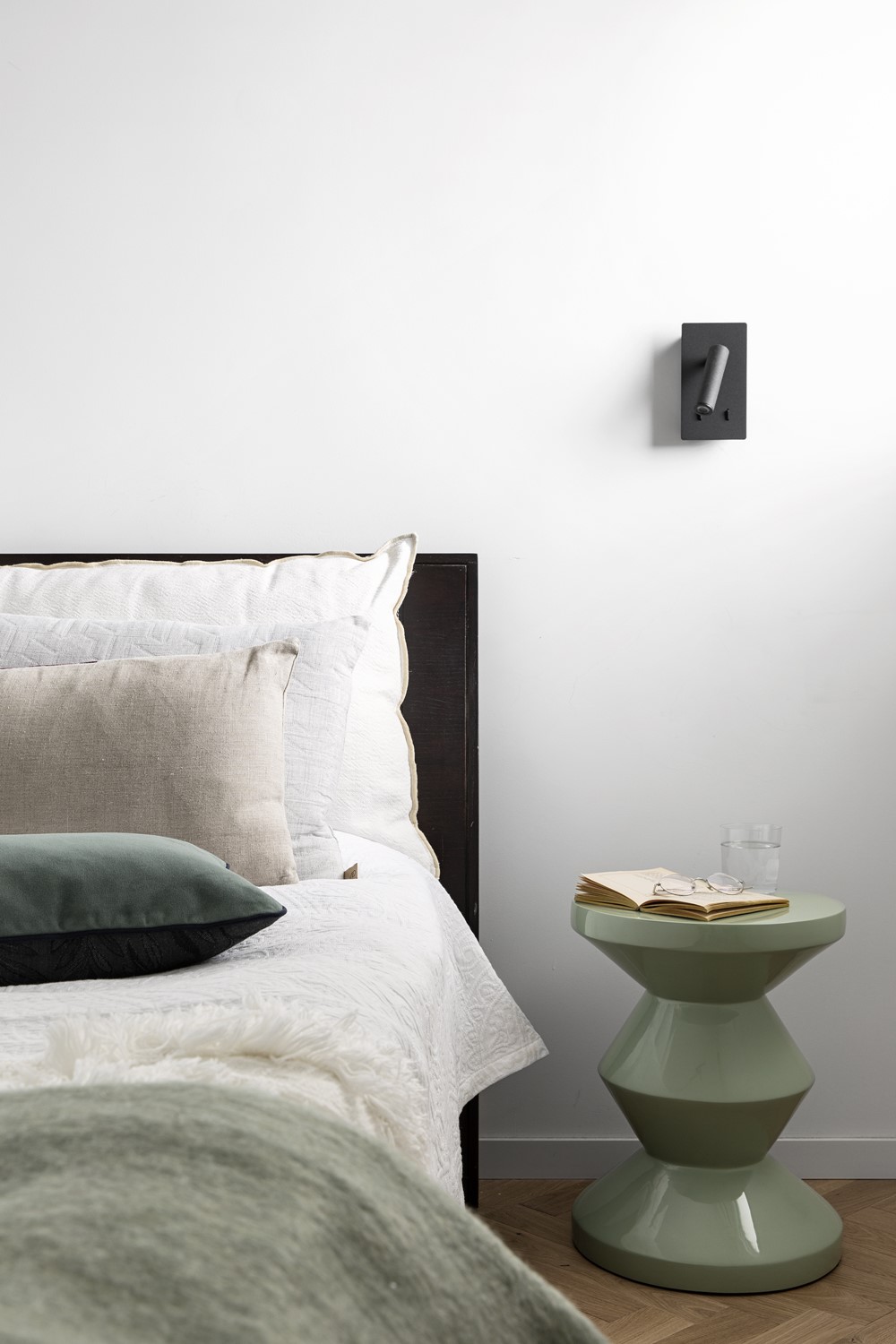 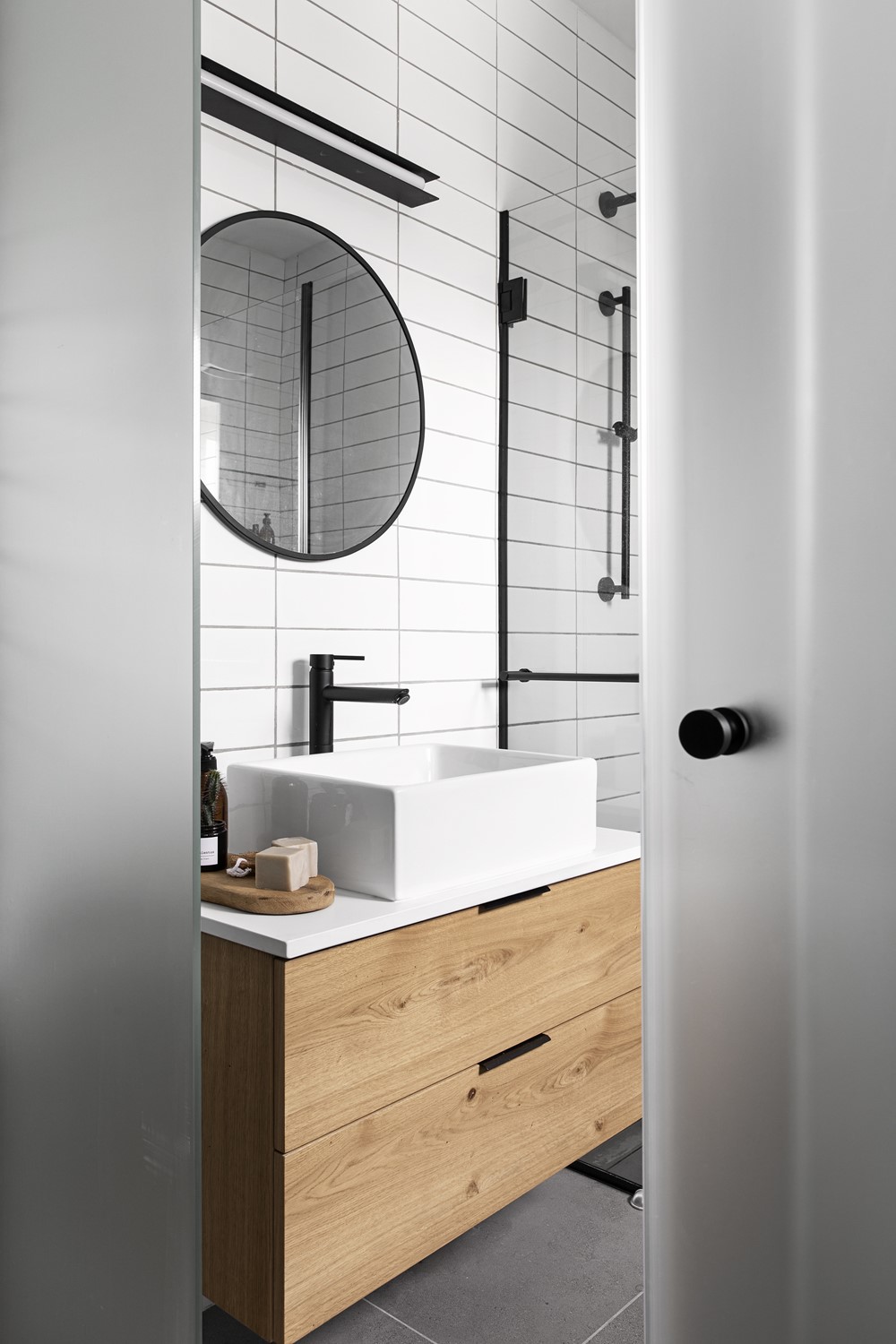 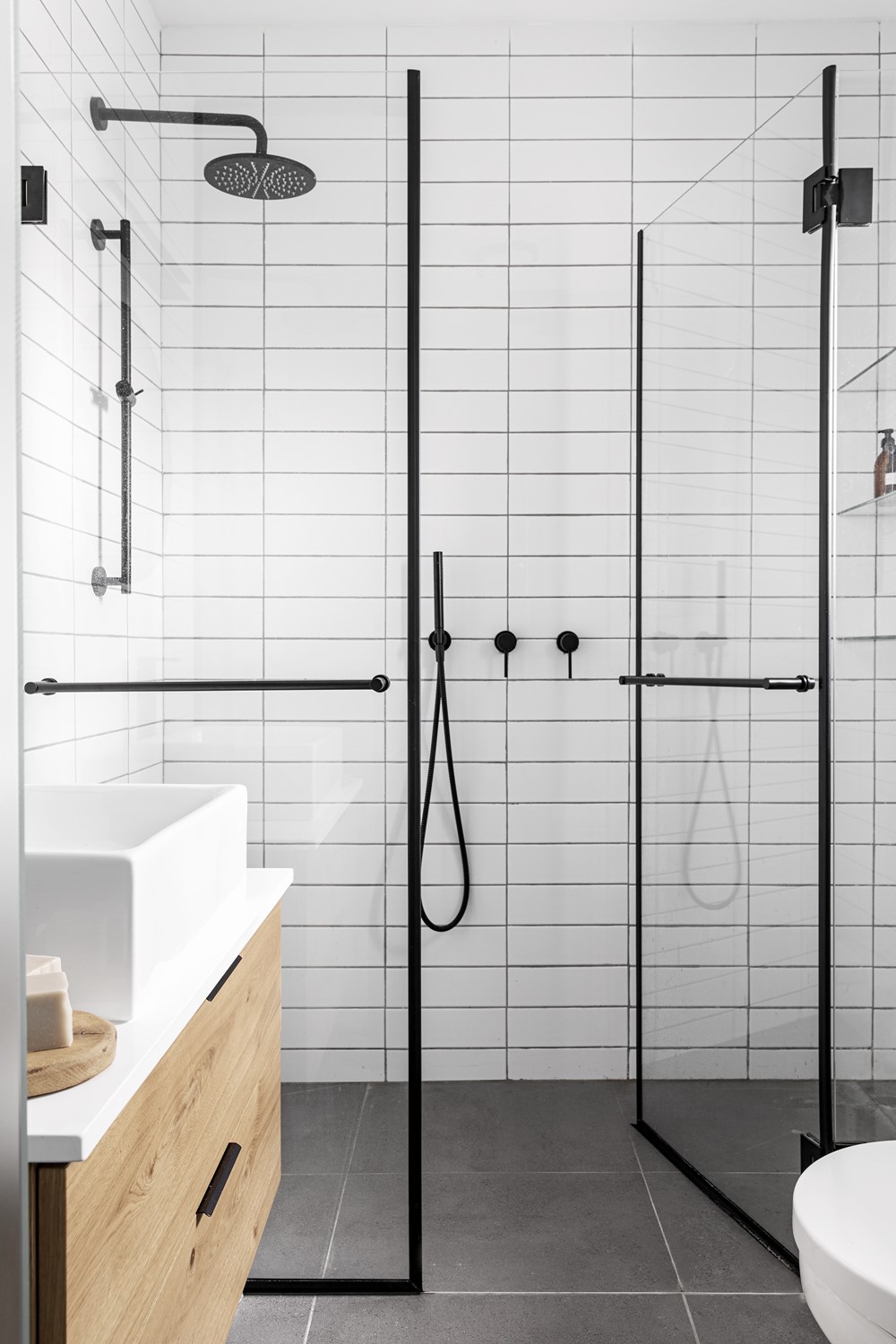 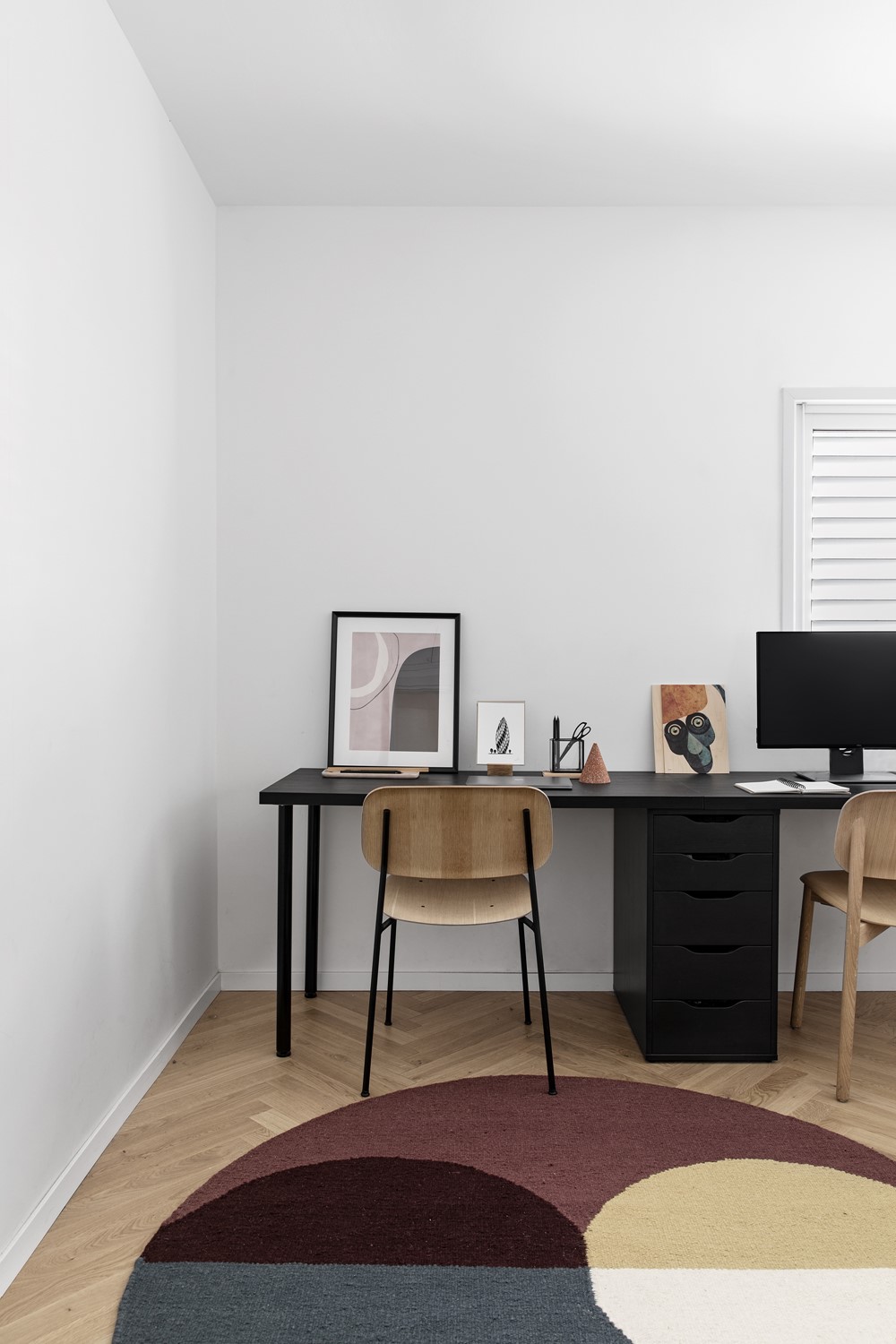 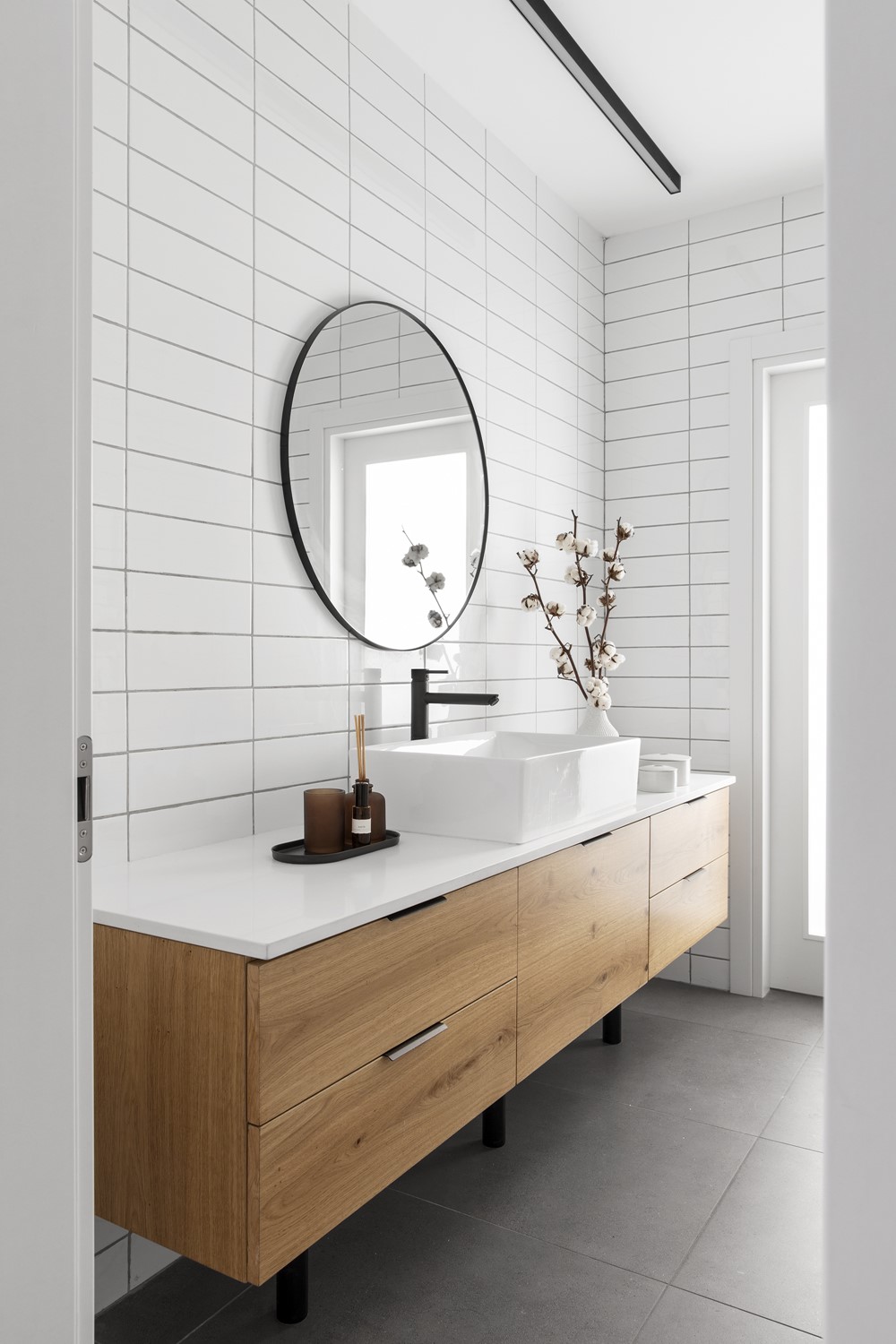 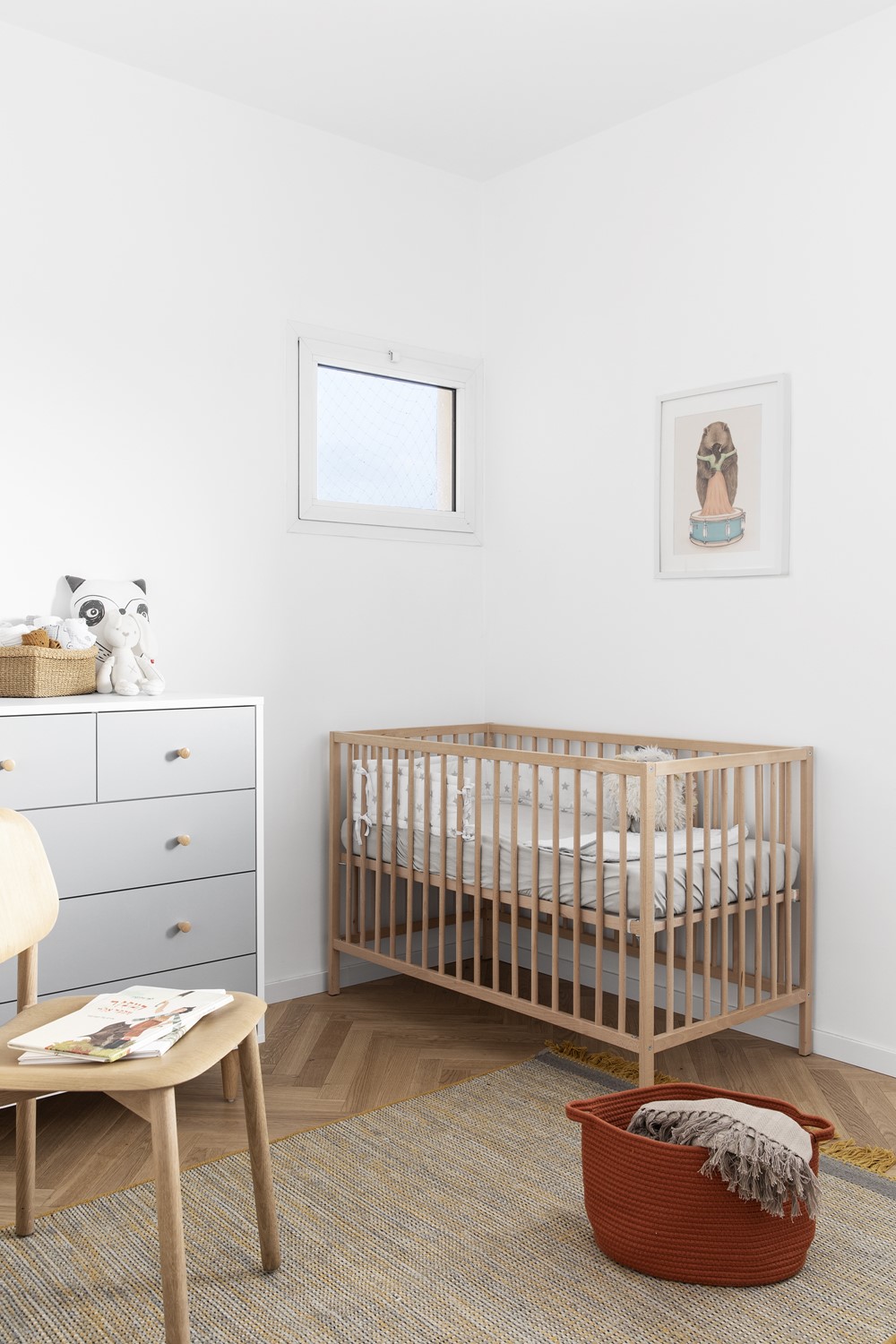 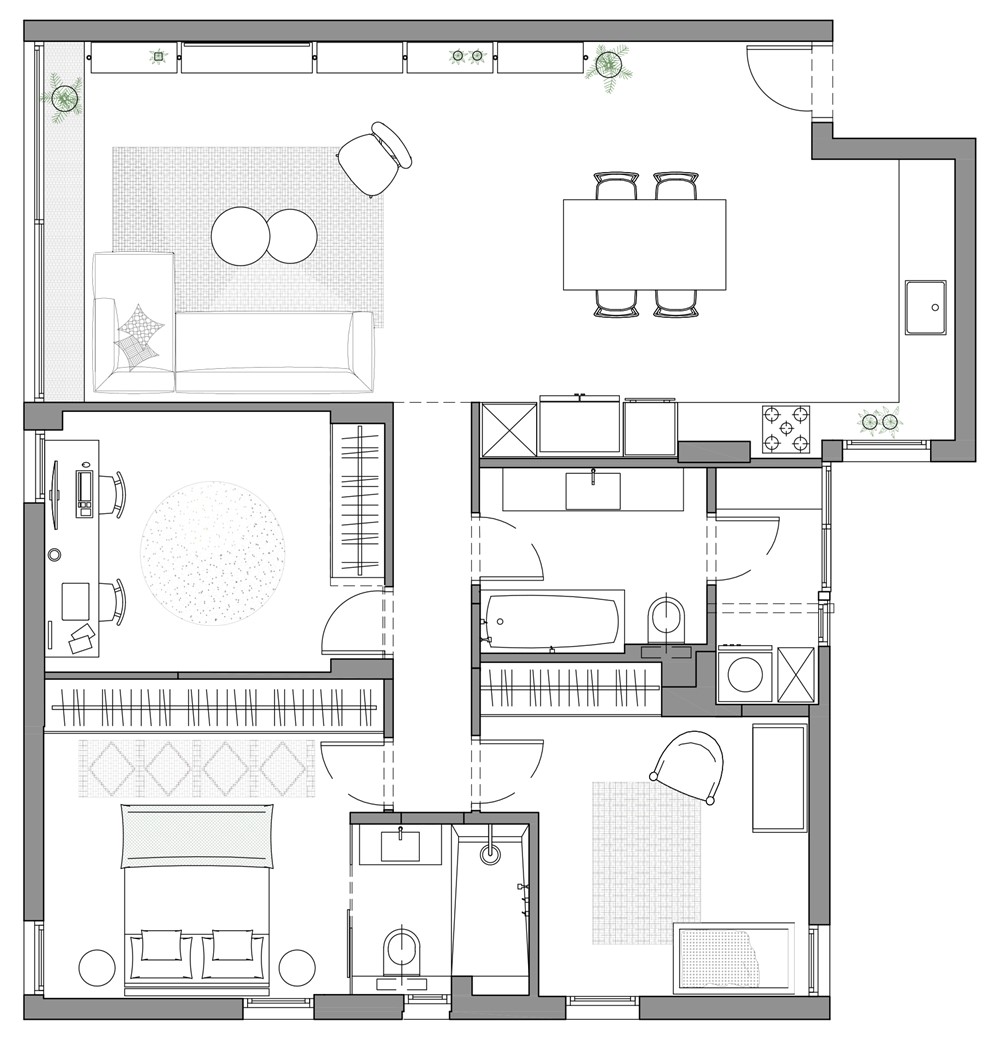 The public space can be fully experienced immediately upon entry to the apartment. The front door is located at the edge of the public space and in front of a large window facing the urban landscape. The entire space was covered in fishbone oak hardwood floors and a large custom made shelving unit was installed on the wall facing the public areas. It is made out of black iron and incorporates extremely thin shelves for the display of various accessories, in addition to a designated space for the TV screen. Black track lights were installed alongside it and in front of it stands a grey sectional sofa. An existing bench built along the window was covered in MDF boards, which were painted to create a concrete-like finish. An elegant pendant concrete lighting fixture hangs from above and emphasizes its texture. A grey carpet with a geometric pattern was placed in the center of the living room and above it are two coffee tables by HAY, one is made out of oak and the other of black iron. An orange leather armchair and throw pillows in brown and green tones add delicate touches of color to the space.

The kitchen replaced a previous utility room and is located on the left hand side of the entrance. It consists of two perpendicular units – a shorter one with lower cabinets, a sink, a dishwasher and a wine cooler, and a longer one with an additional worktop, a stove and a taller unit with a refrigerator, an oven, a microwave and an air conditioning vent. The design is minimalistic and timeless. It includes white cabinet doors and a grey terrazzo-like worktop. The surface is used also as a wall covering panel and behind the stove, which was placed in an existing niche between two columns, it climbs up towards the ceiling. Two white and elegant shelves hang on the wall by the corner for accessible storage. Black track lights were hung in parallel with the cabinets, and cylinder shaped ceiling mounted lighting fixtures were placed in front of the taller unit. The dining table was placed in the center of the kitchen, allowing the best possible utilization of the space. An oak dining table with a grey surface and black chairs were chosen, above them are cone shaped pendant lighting fixtures, also in black.

In the master suite, a glass partition with a sliding door and a steel frame creates a division between the bathroom and the bedroom. Thus allowing a slight redistribution of the spaces and a subtle expansion of the bedroom. A wooden black bed stands in the center of the room, alongside it are two different mint-green side tables and two black wall mounted lamps. In front of the bed is a large closet with white doors and black handles. Here too black track lights were installed in front of the closet and next to it two white decorative shelves were hung.

An additional bathroom with access to a utility room was planned instead of the formally existing guest bathroom. Both bathrooms, this and the master bathroom, were designed using similar design elements and materials. Their floors were covered in grey tiles, and white brick tiles cover the walls while creating a sleek grid that makes the spaces feel taller. Black faucets were chosen and the frames of the shower glasses were also painted in black. The cabinets were covered in oak veneer and above them, white surfaces and white vessel sinks were installed. Round mirrors with black frames were hung on the walls and black elongated lighting fixtures were chosen.

An extra bedroom was made into a home office for the couple. A black double desk was placed along the wall with two similar but different chairs – one with black iron legs and the other with wooden legs. A round carpet with a large geometric pattern adds color and warmth to the room. The nursery is located opposite from the master suite and incorporates a neutral combination of wood and grey furniture with a grey and yellow carpet in the middle.