This apartment with 170 square meters was designed by Diego Revollo and is located in Panamby, a premium neighborhood in São Paulo, Brazil. 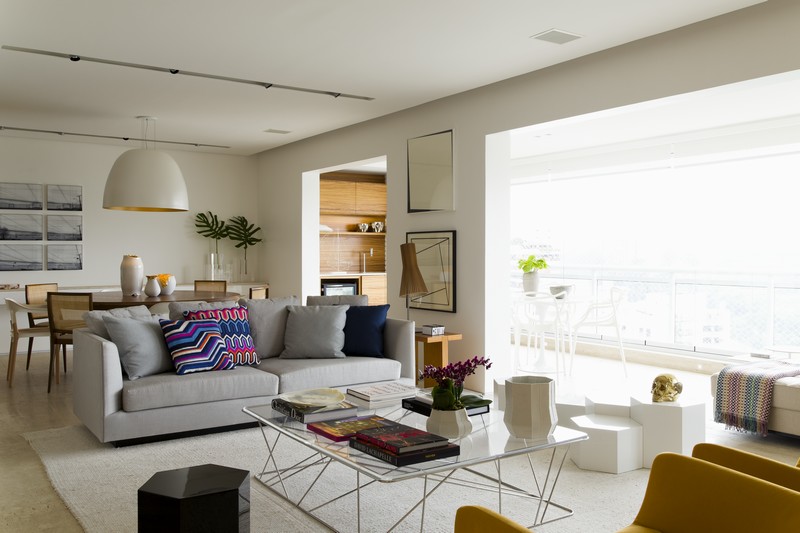 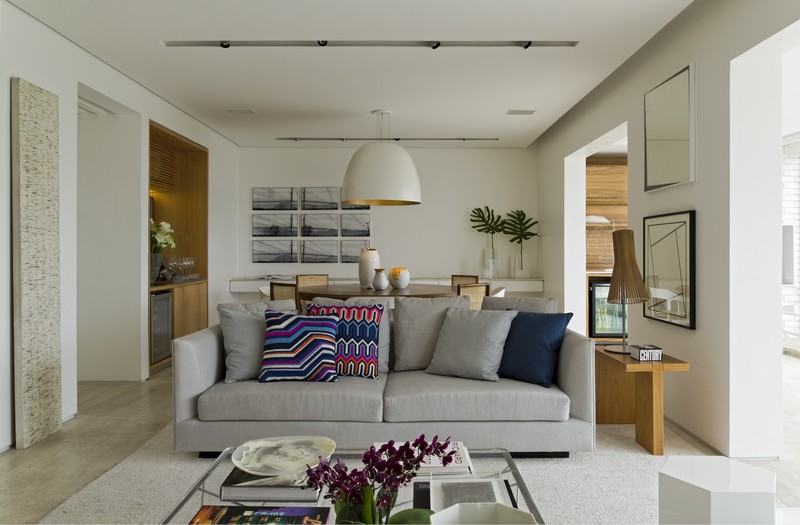 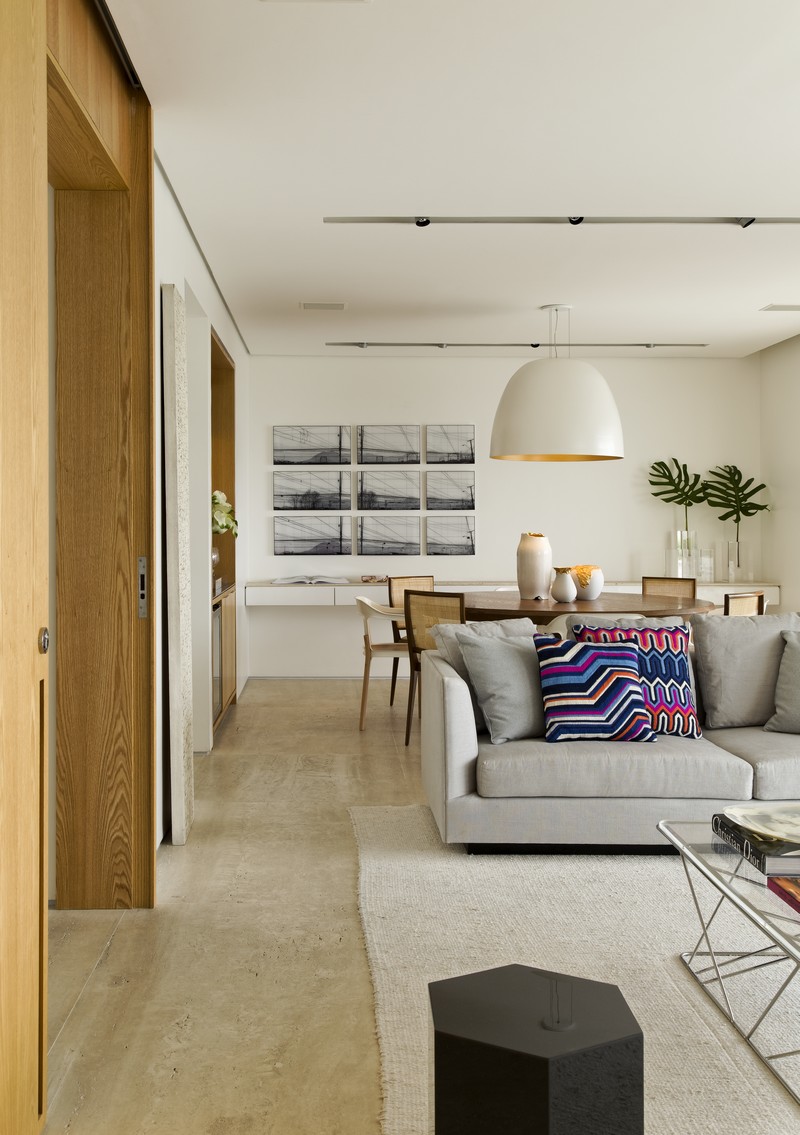 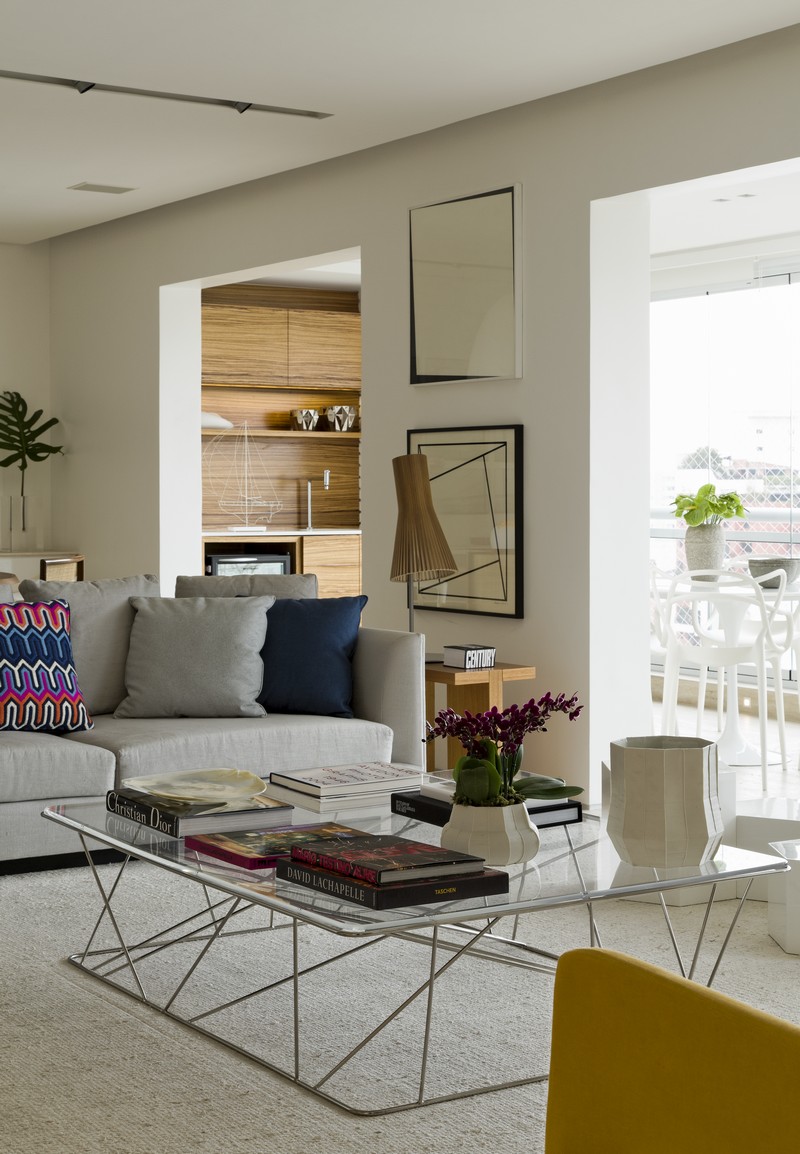 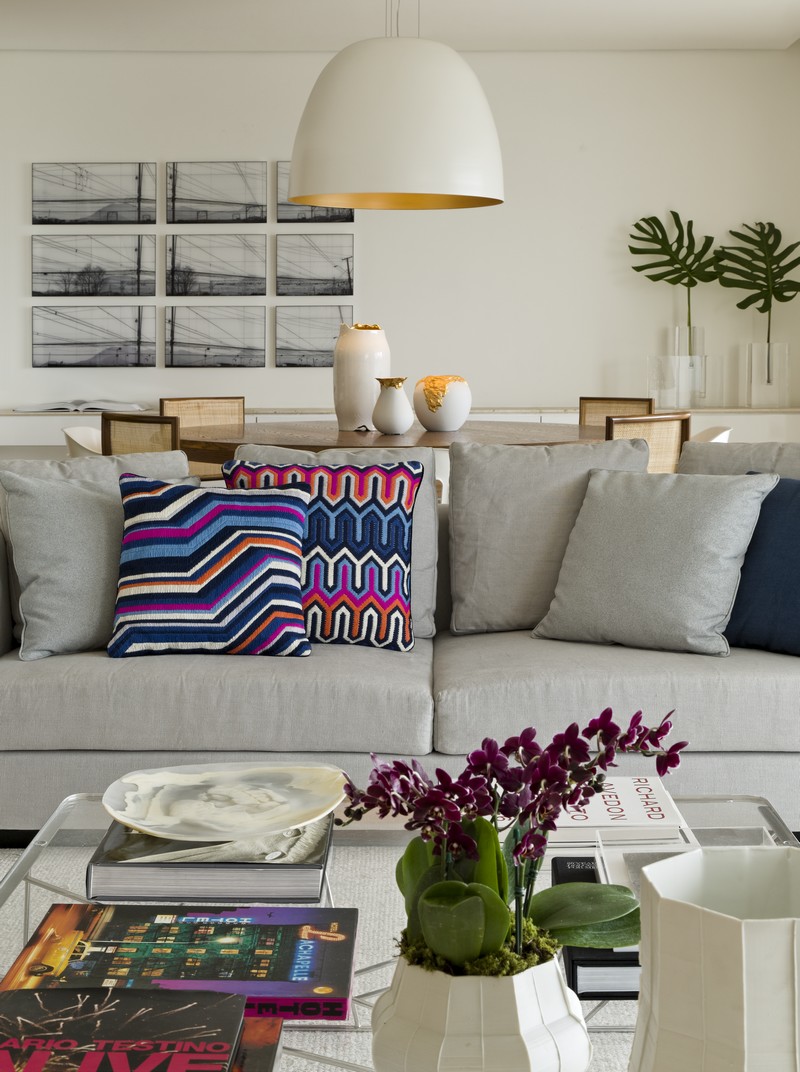 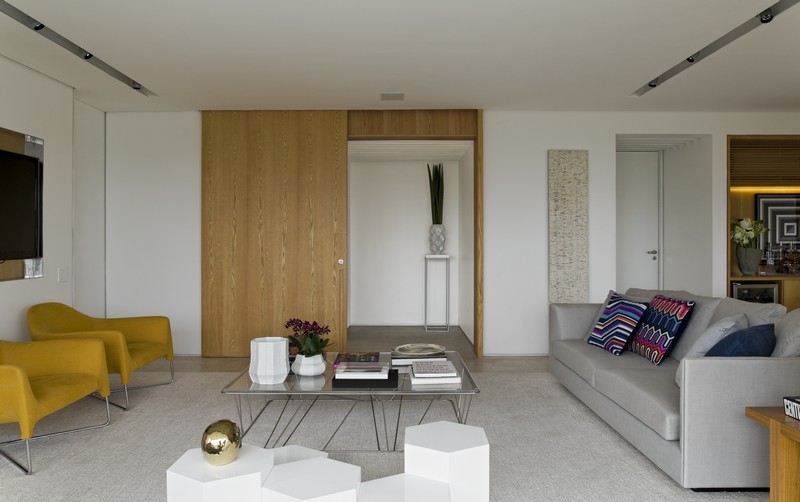 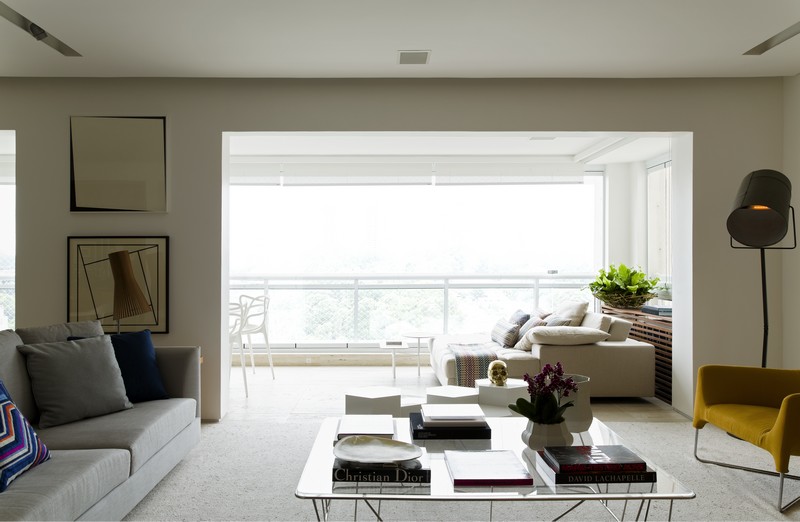 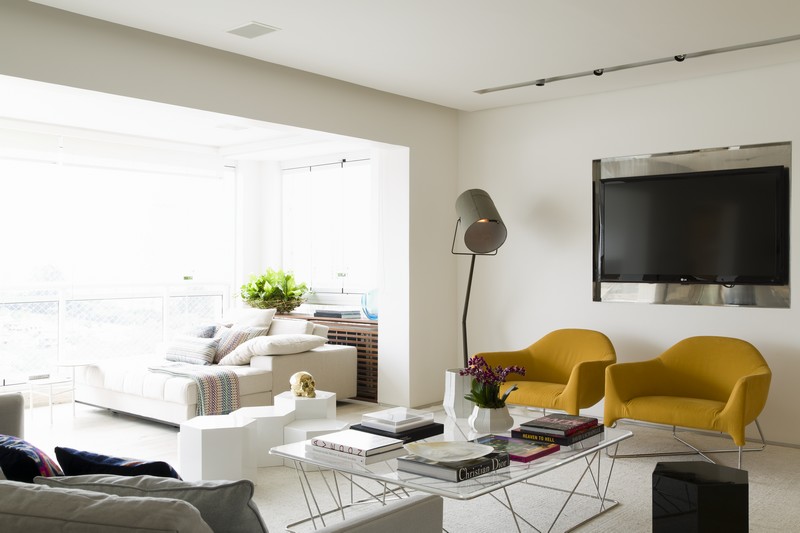 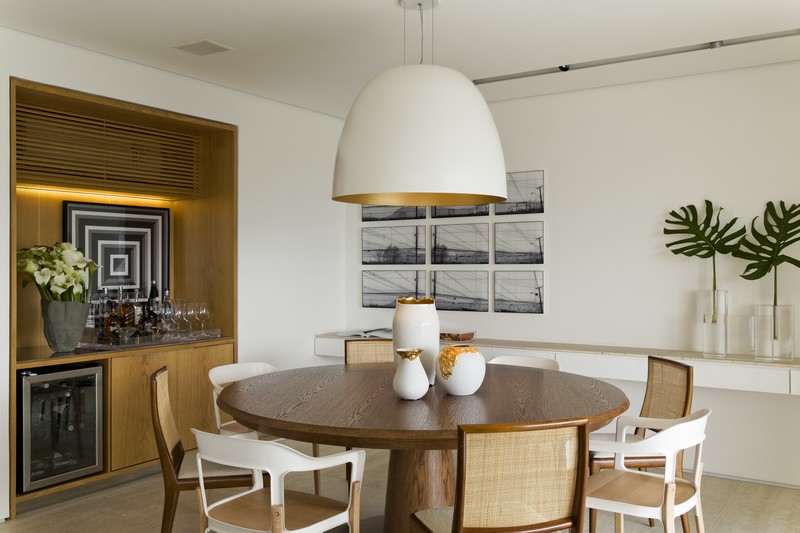 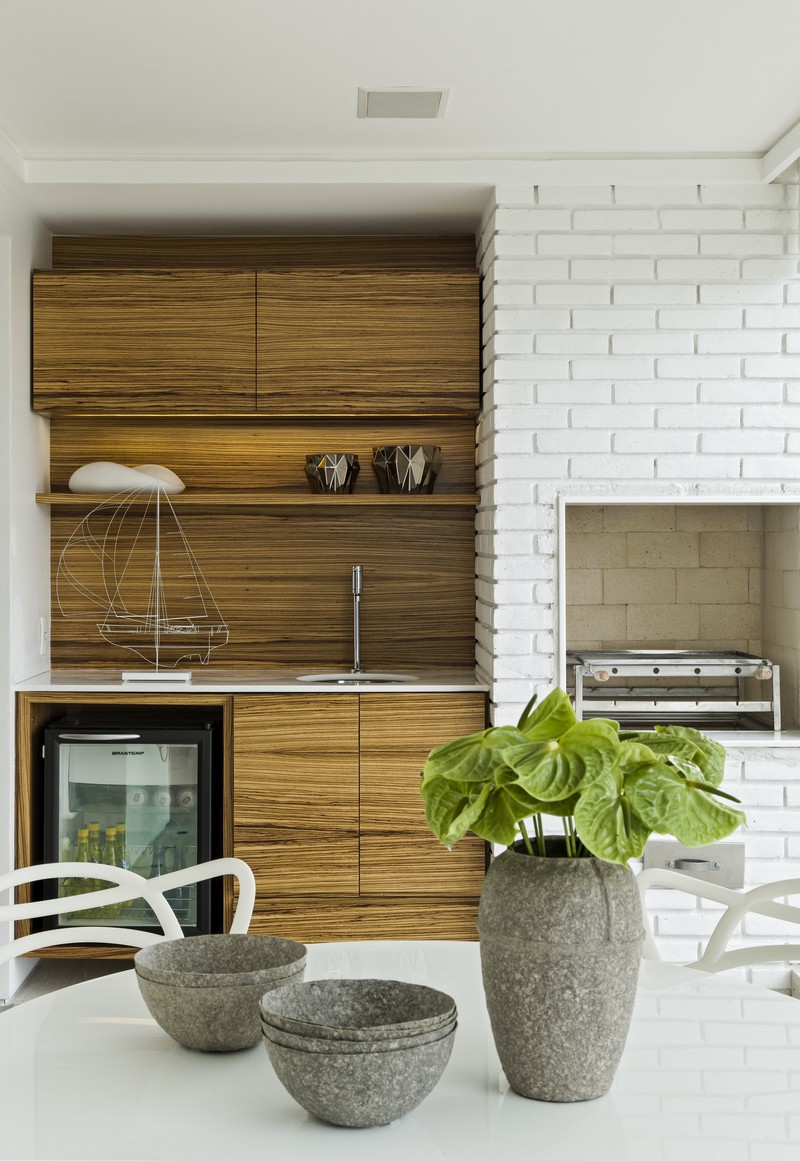 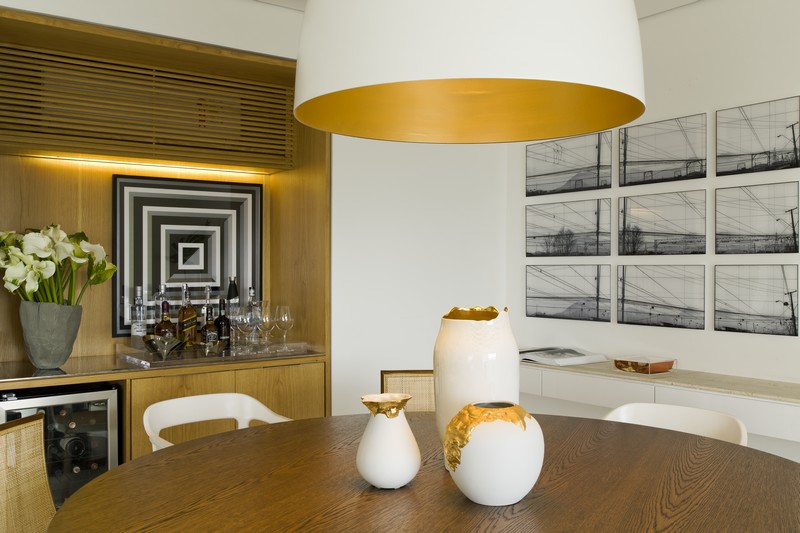 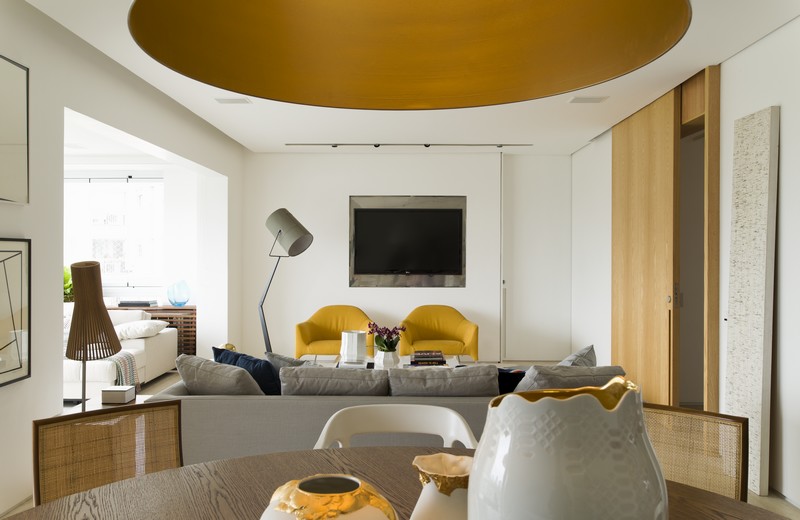 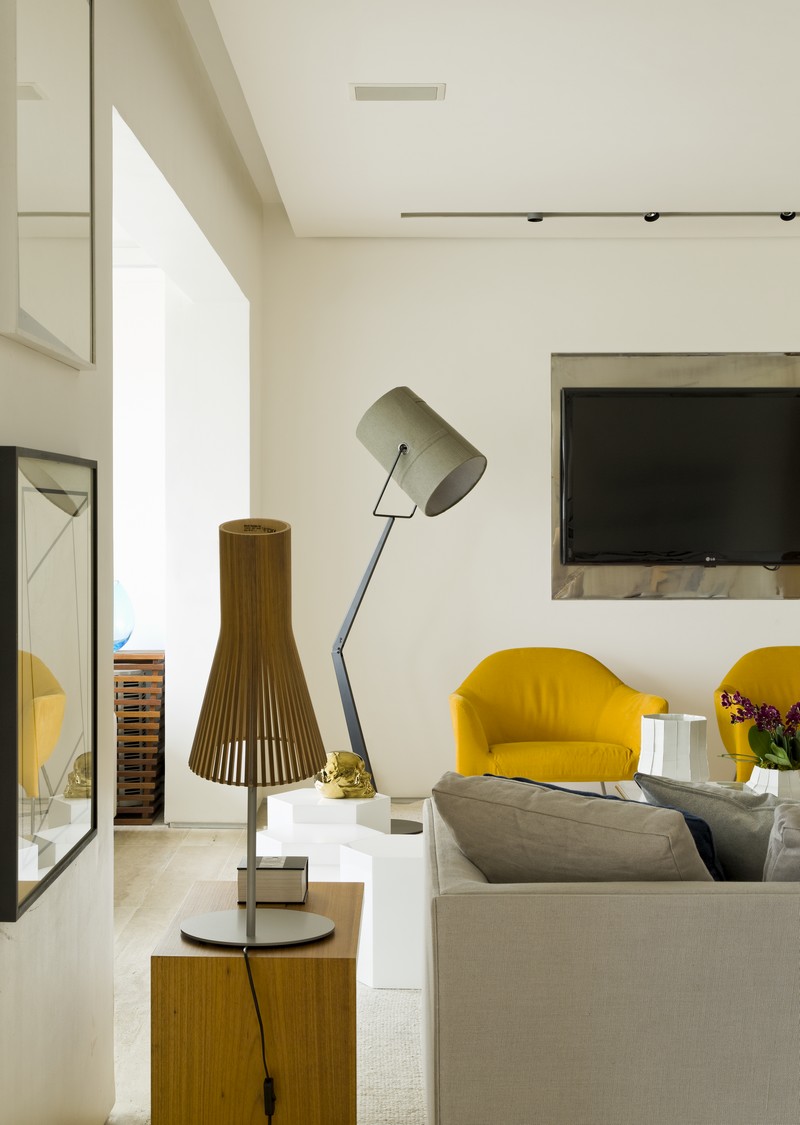 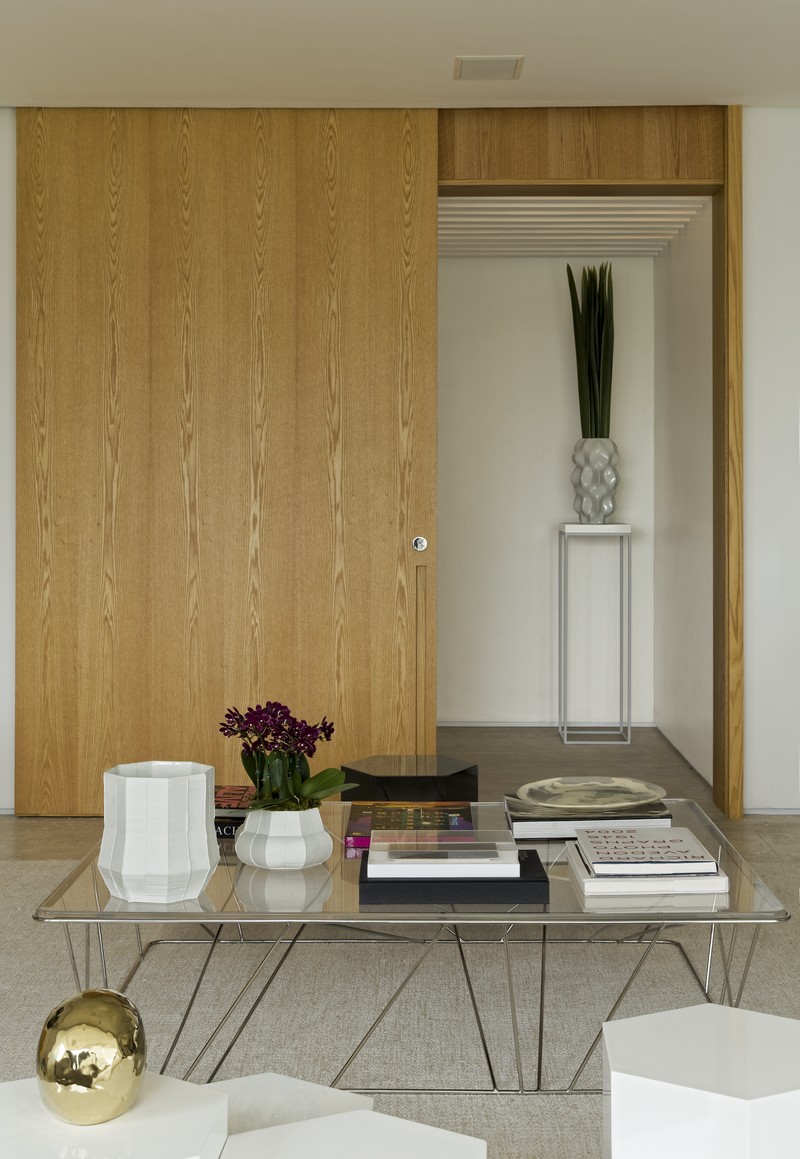 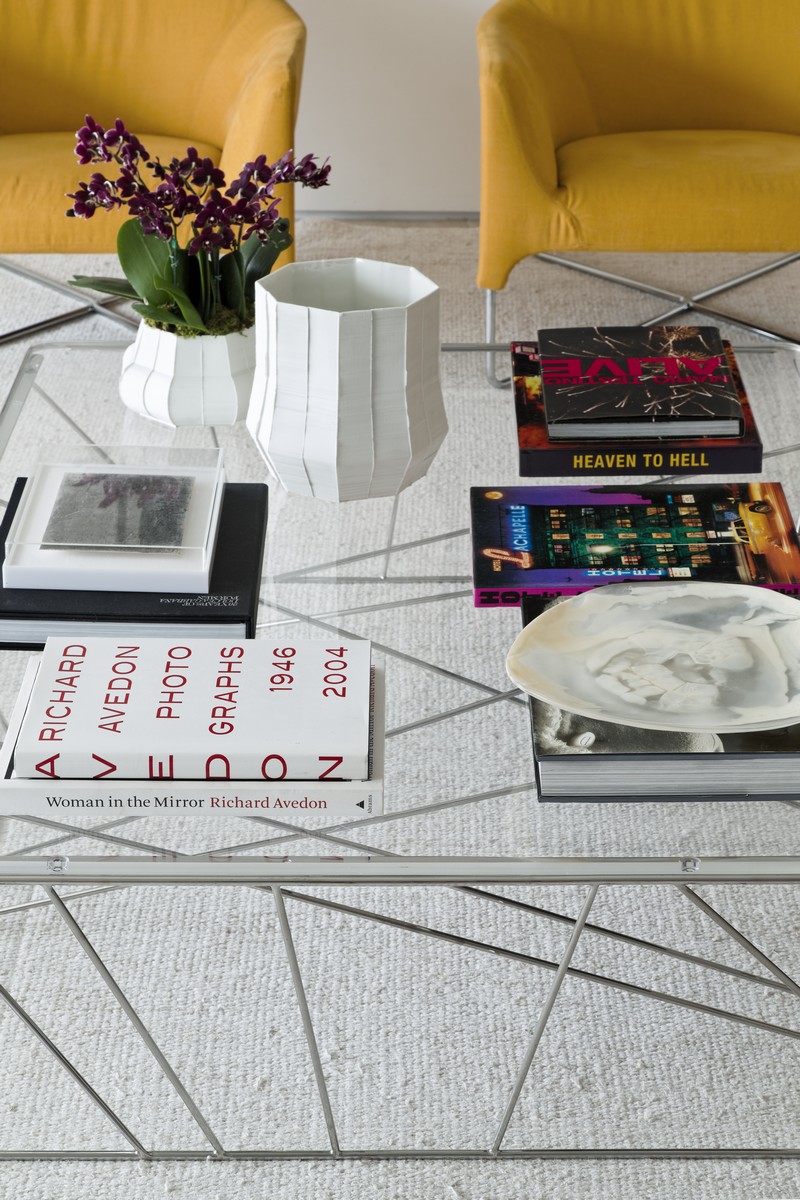 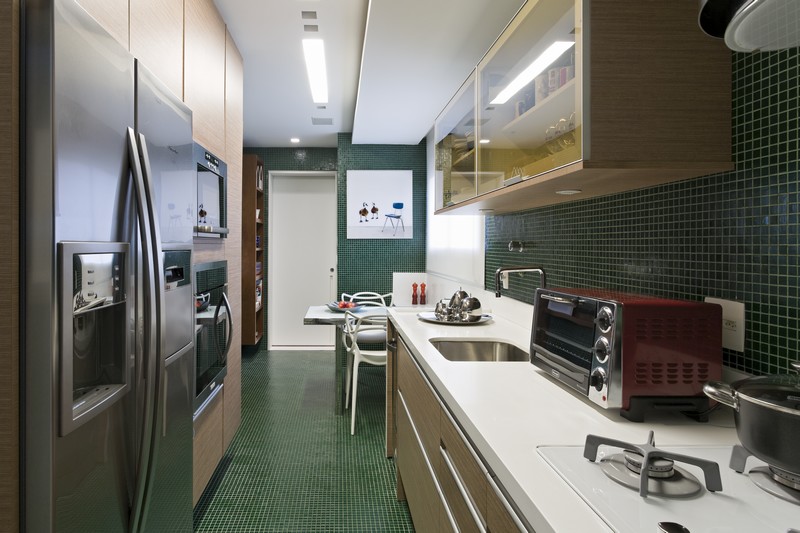 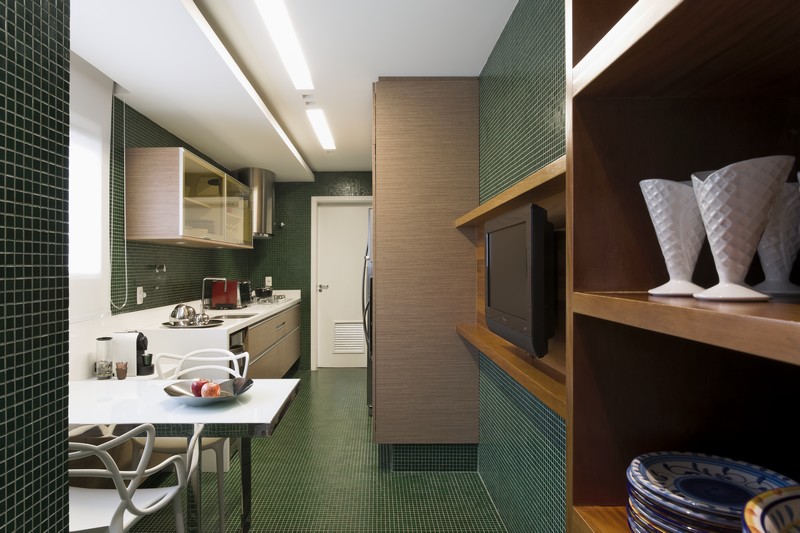 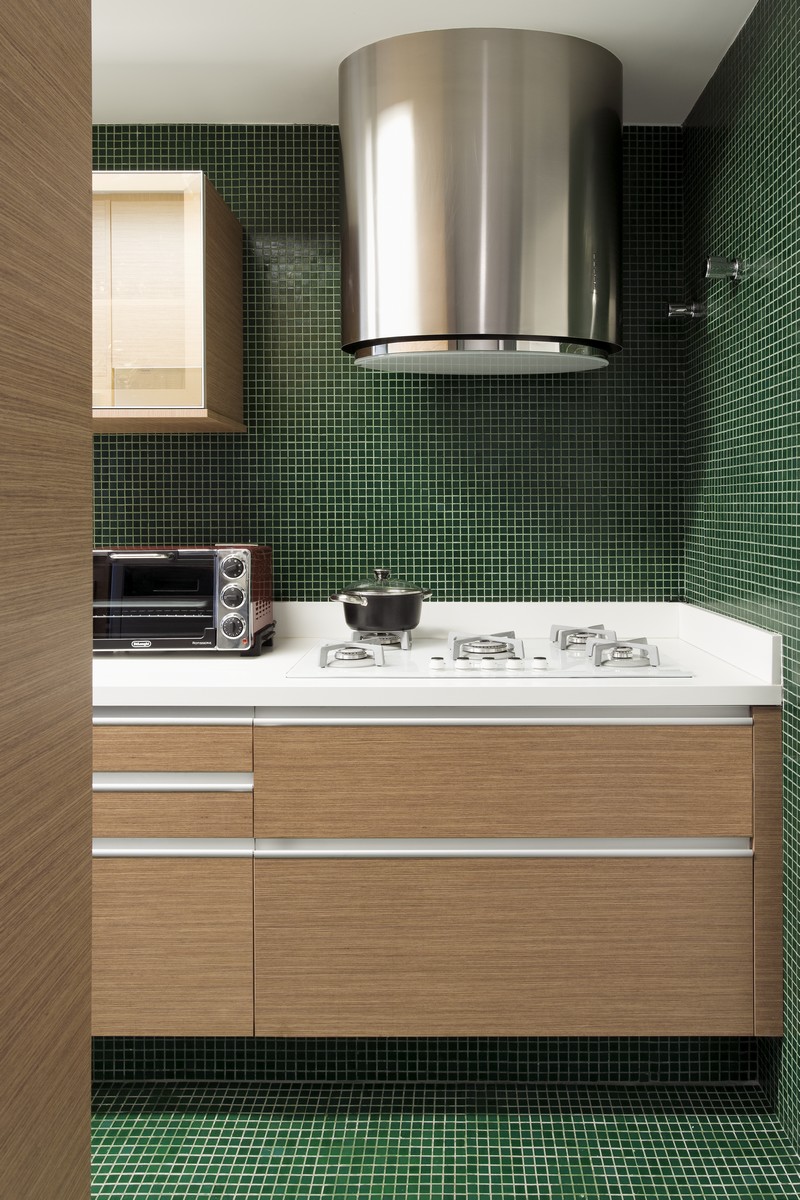 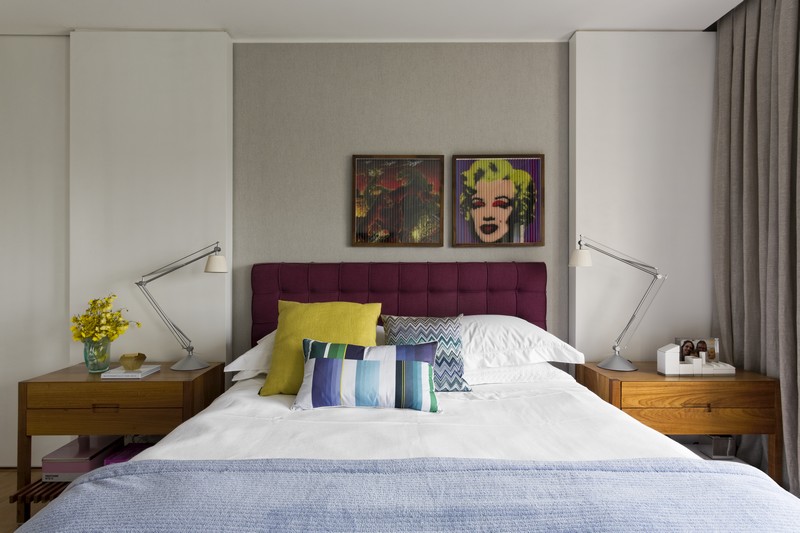 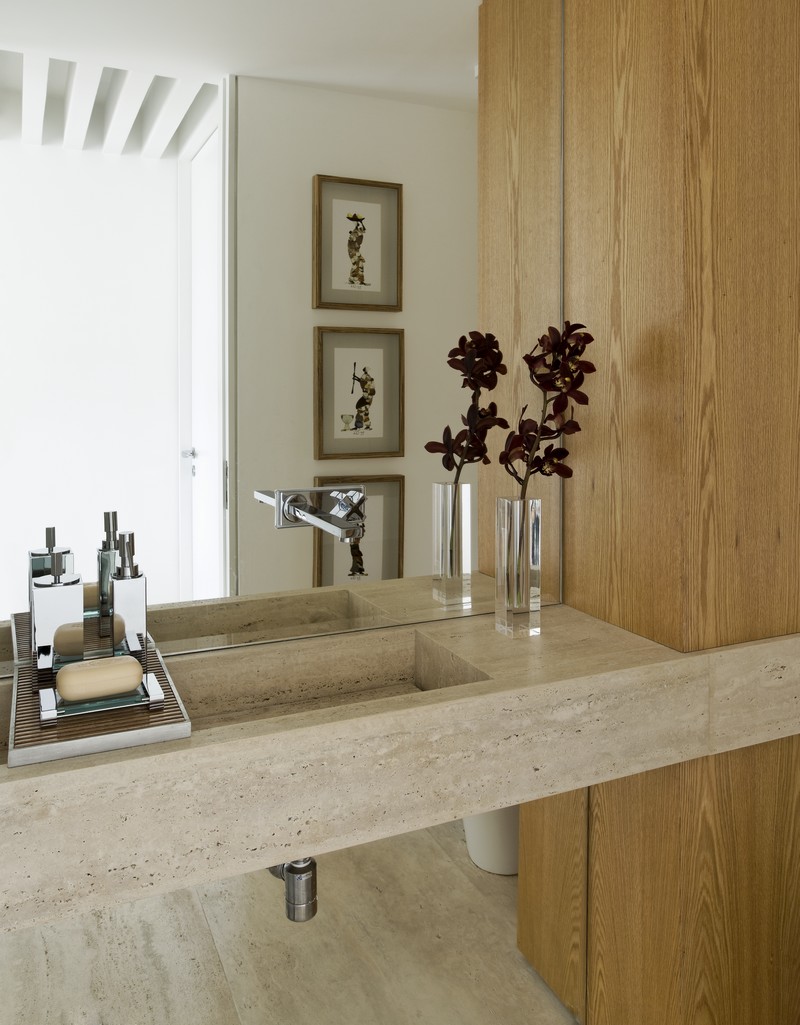 This apartment belongs to a young couple with 2 kids that have a modern life style. In the original project, there was a big balcony in the entire living room extension. But since São Paulo weather is very instable, we suggested that this space became part of the living, closing the balcony with glass and bringing the same architectural finishes in the entire space. With the balcony closed, a big window was created, flooding the space with light.
Starting from this light and the personality of the owners, a clear floor was chosen, the navona travertine marble crude, which has a modern finish showing the irregularities of the stone that was fixed in big stones. The light of the window and the floor was thought a clean structure. Thus there are no details on the lining and not the walls, and the absence of footnotes gives us the impression that the walls fluctuate.The lighting was concentrated in tears with trails of light. And so that the structure would not be cold, all joinery was taken in natural wood, American oak, light colored in shades of honey.
With the clear and neutral structure, it was possible to bring more impactful elements in the decor. The starting point of the decor was the area of television without the traditional home theater room. For the harmonization of television in the living room, design chairs were chosen with strong color. The color “bright yellow” was therefore a consequence of the space, the personality of the clients and also the design of the chair. To harmonize this striking wall assembly of television, armchairs and stainless steel frame, the other furnishings were chosen in shades of gray and beige, always
interspersed with wood. For other items of decoration, yellow armchairs also guided the design being used this same hues or shades of wood and gold to complement the set in a neutral way.
The result is light and clear, and t the same time, shows joy and the personality of the owners.
The other rooms of the apartment reflect the same modern concept. For the kitchen it was used a tablet green glass forming a “green box” (floor and wall) with wood. The environment became practical and reflects the lifestyle of the residents. In the bedroom, the purple head of the bed, brings a unique combination of colors. Again the personality of the couple contributed to a modern and unusual setting without losing the elements of a cozy bedroom.
Photographer Mr. Alain Brugier