Meadow House designed by Strom Architects is a replacement house in a quiet village in Essex. The beautiful site sits at the edge of the village, and has an open parkland feel. Our approach was to ensure that we placed great emphasis on the landscape so the house and site were considered as one. Photography by Numa. 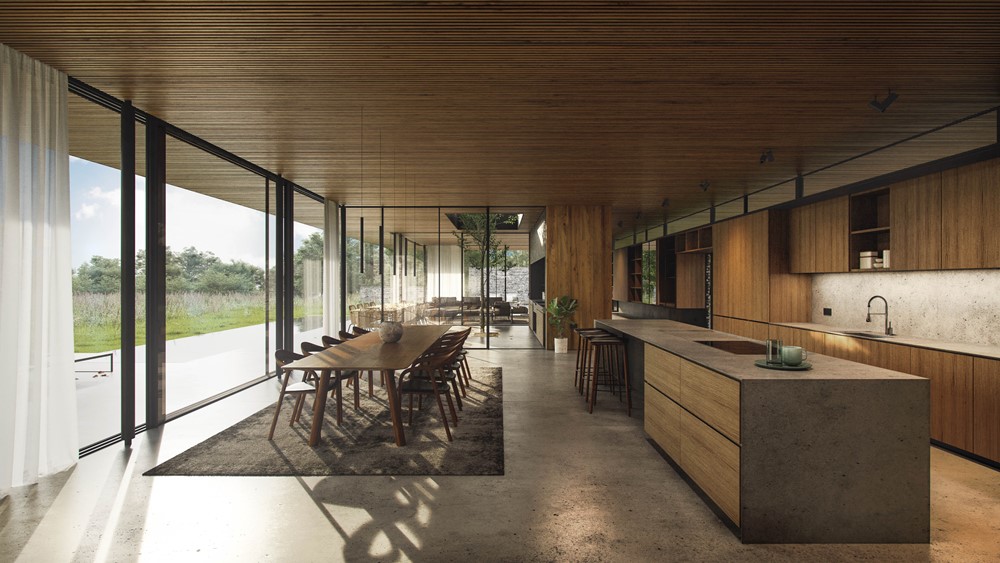 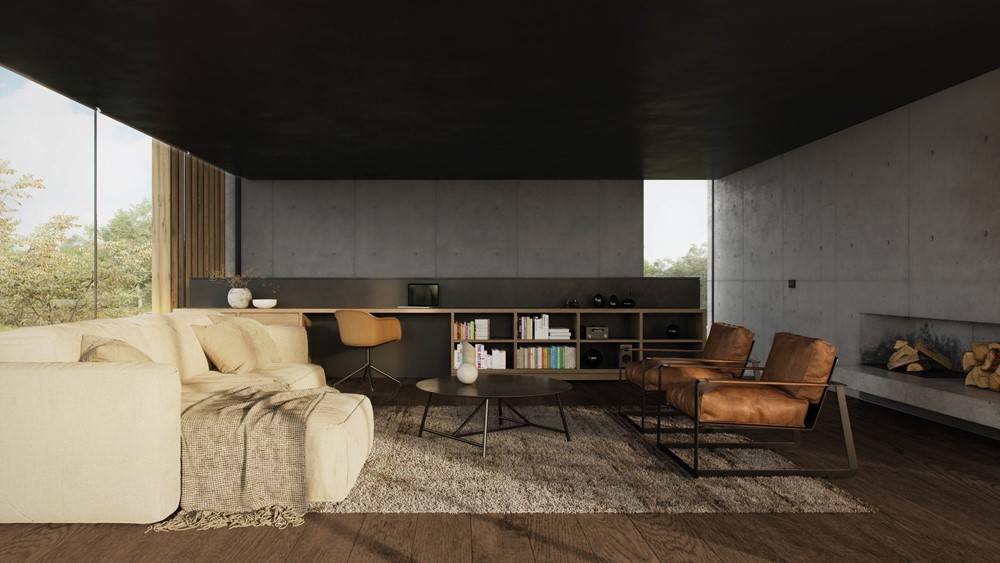 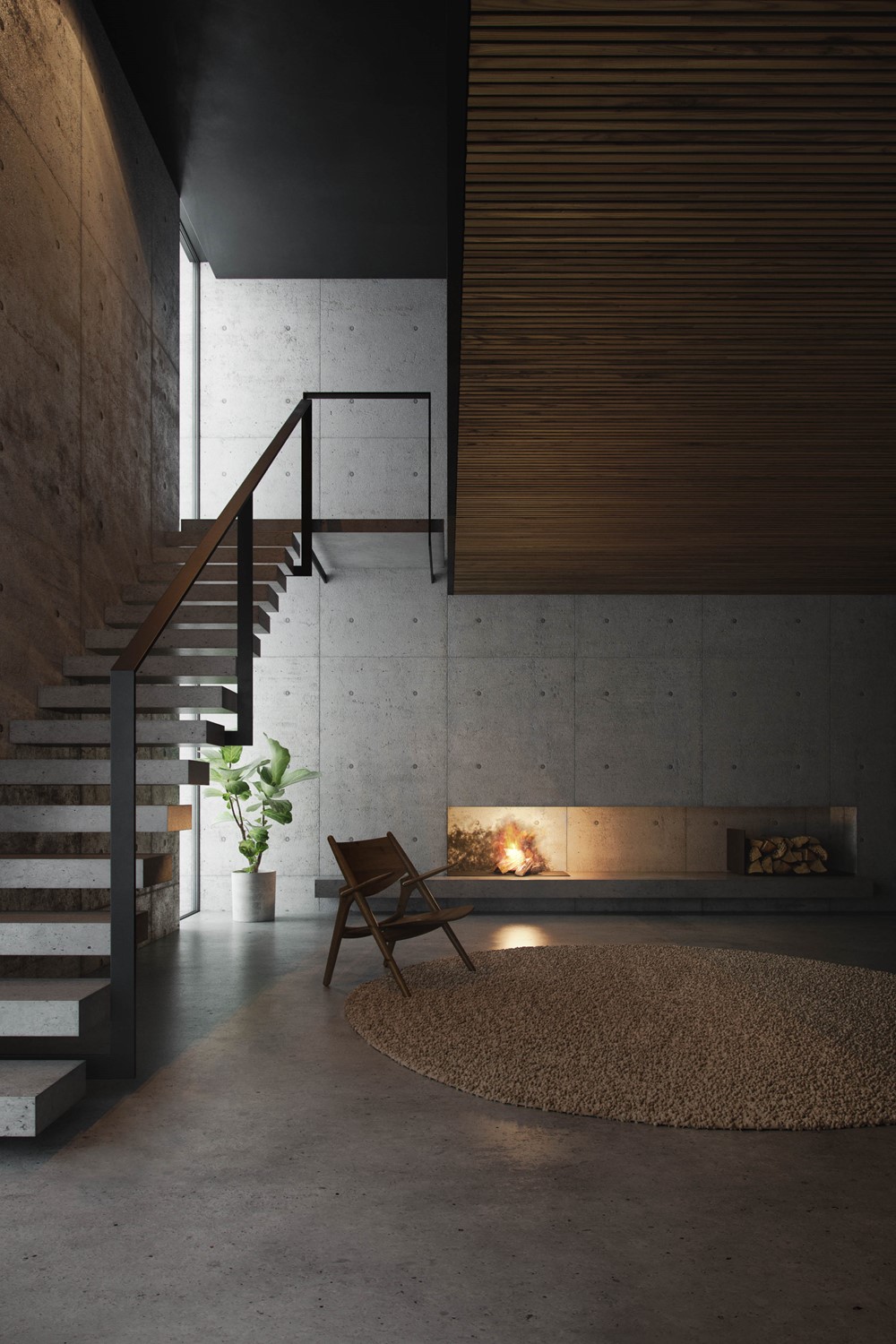 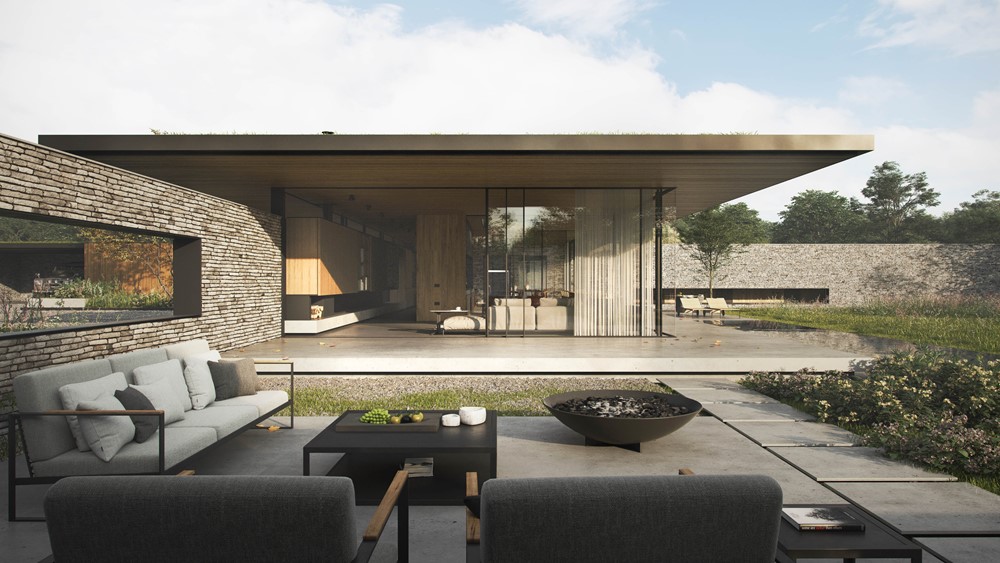 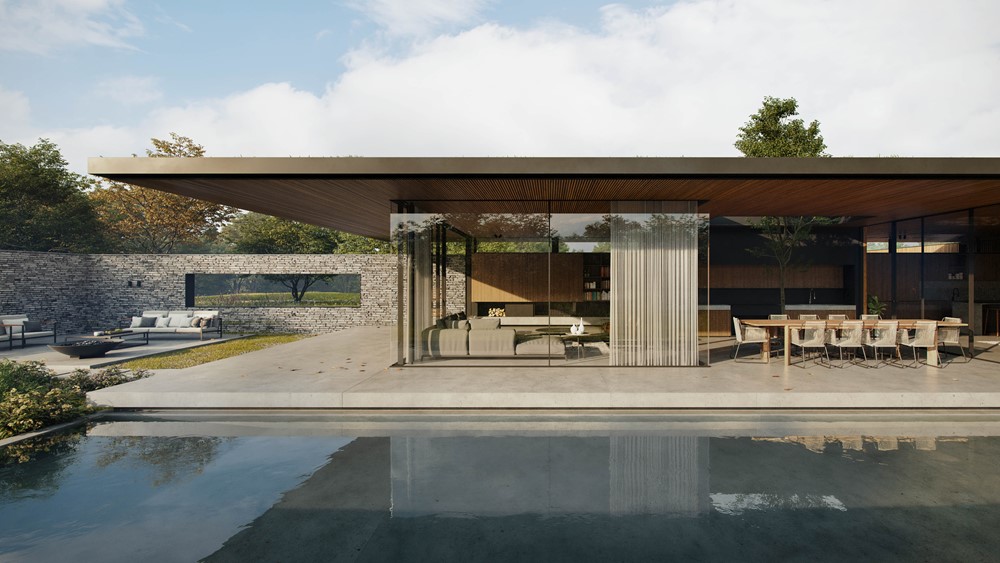 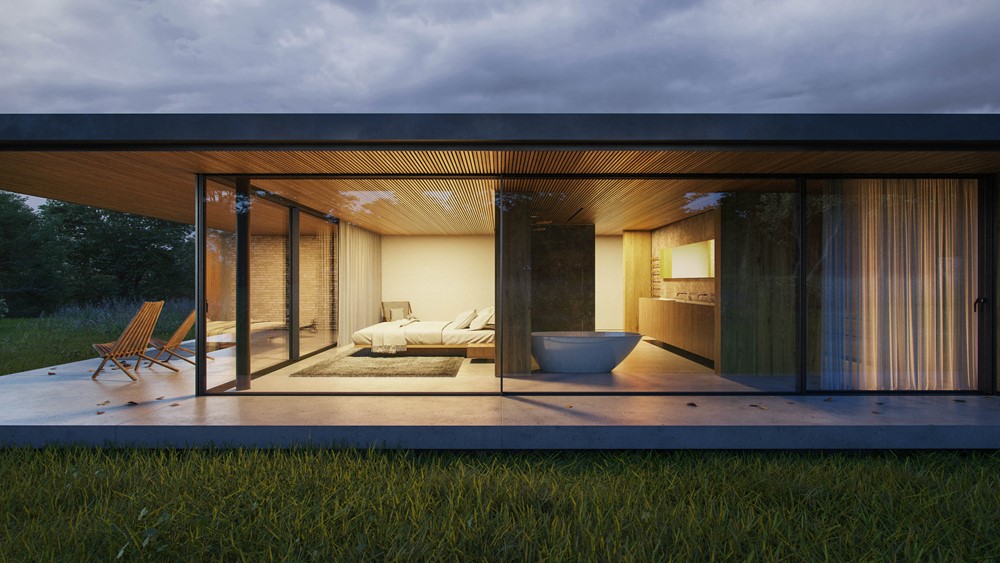 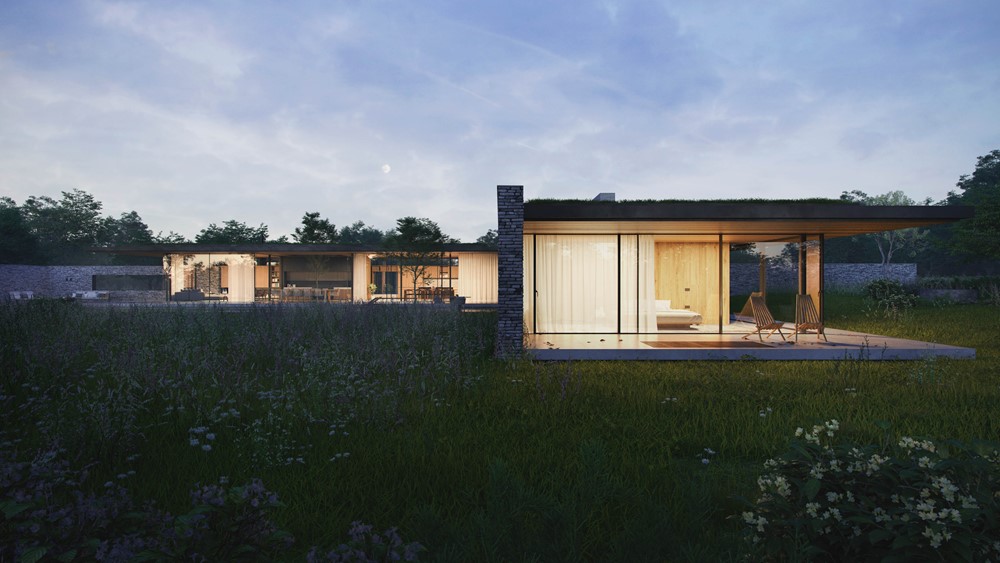 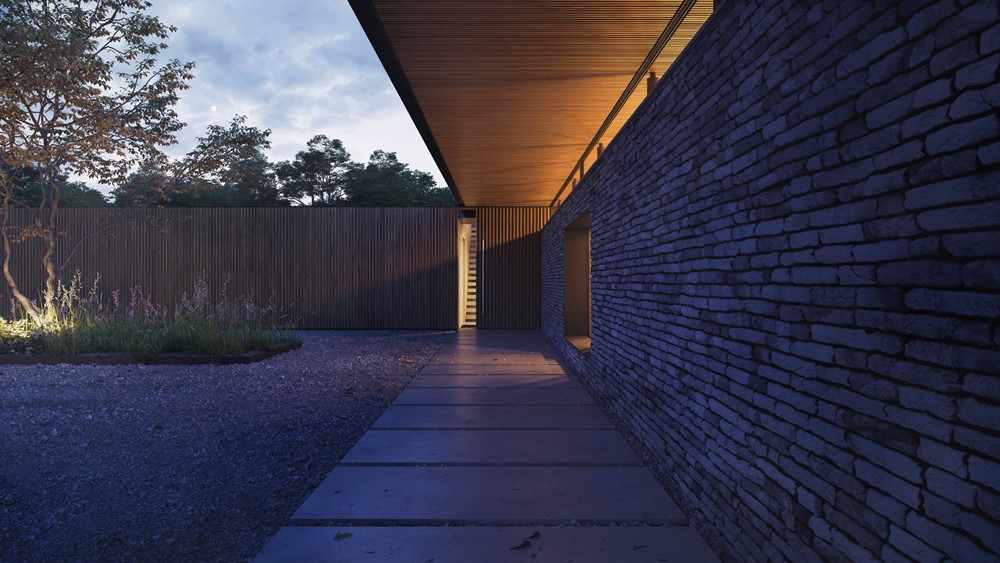 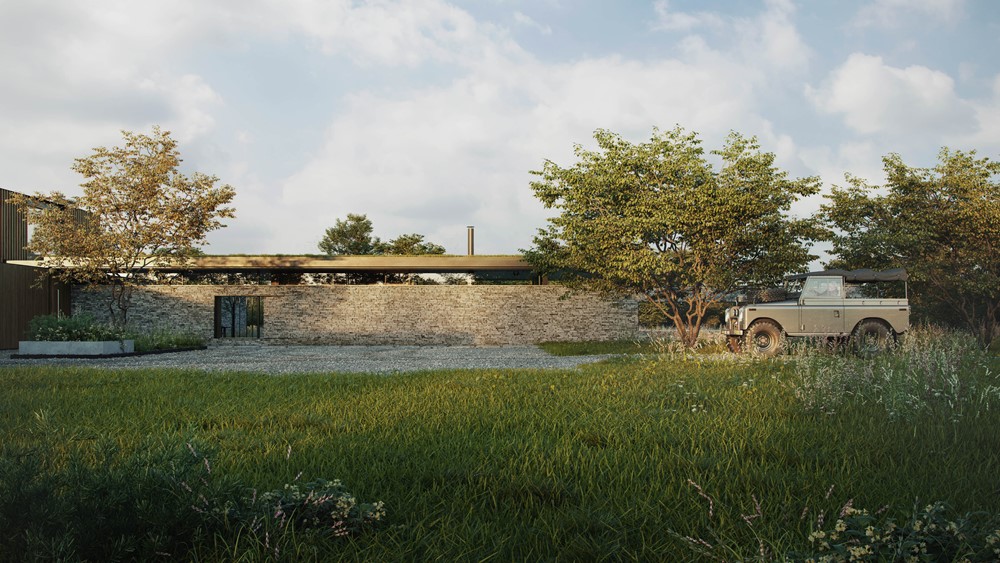 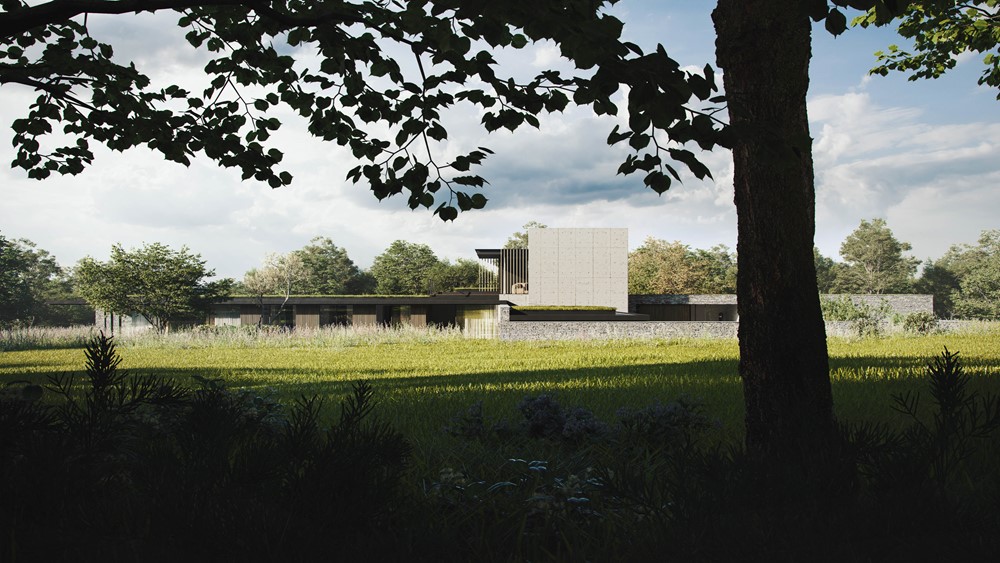 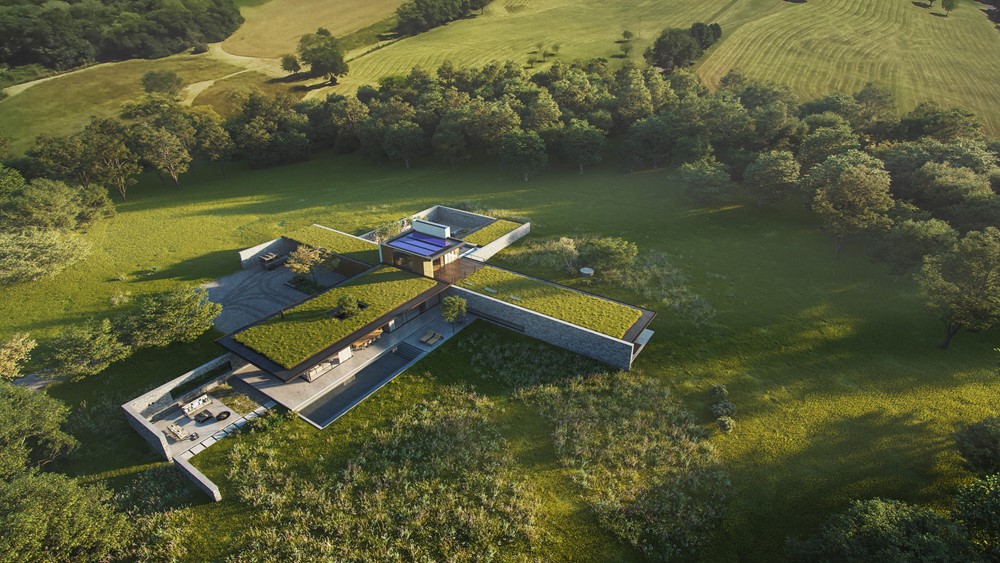 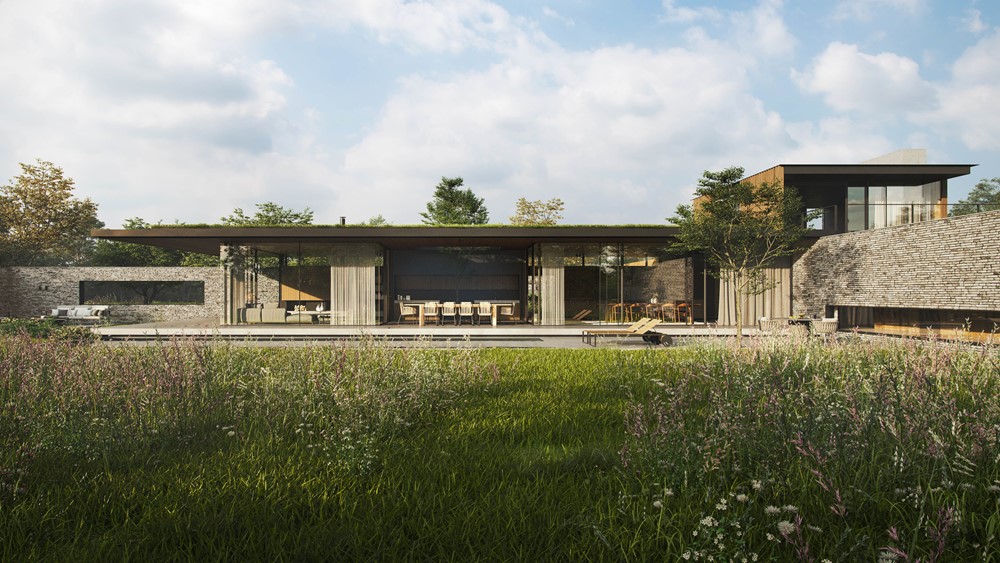 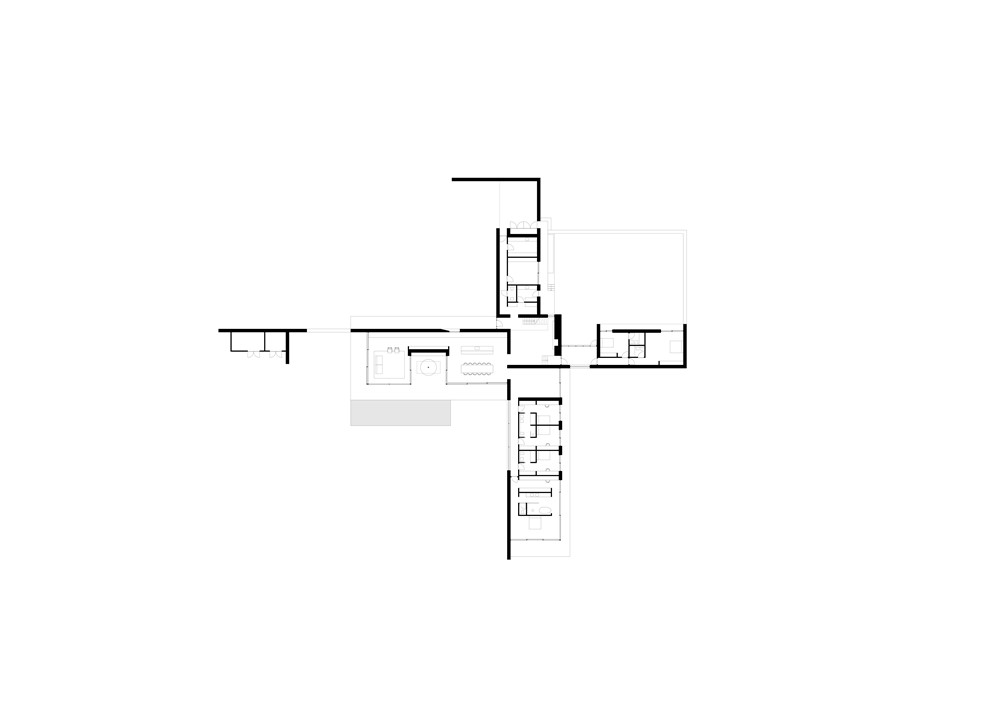 To re-organise the site, our proposals insert a series of walls which respond to the physical site features. A wall starting near the access point to the site delineates the entrance, and with another wall perpendicular to the first, an entrance court is defined. A third wall on a south-west to north-east axis defines an area facing south-west for living and another for sleeping that faces south east to catch the morning light. A final fourth wall defines an area to be used as kitchen garden and where the ancillary building containing the study and gym is located. Together the walls form a pin-wheel arrangement of space. The entrance and access point to the different areas are at the centre and at the pivot point of the plan arrangement.

Four different pavilions, each with its own function, occupy the four different corners of the pin-wheel plan.
To the north-east is the garage volume, also containing plant, utility and storage.

To the south-east is the guest annexe. This volume is located in a walled garden. This is the higher part of the site, allowing the walled garden to be set into the ground to reduce visual impact.

To the south-west is the bedroom wing – it faces south-east to capture the morning light. The master bedroom is at the end, allowing the best views out over the landscape.

The final volume contains the social areas: kitchen, dining and living room. By locating all other functions in the other volumes, this pavilion can be very clean in its architecture, achieving an elegant and distinct appearance.

By continuing the external walls we create a series of walled gardens, each with its own identity and purpose, and creating visual continuity out into the gardens.
In the centre of the pin-wheel plan sits the primary access and circulation space. This is the only part of the house that is two-storey, accommodating a more formal sitting room, benefiting from elevated views of the site and surrounding countryside.

The over-sailing roofs are strong features of the house, helping to define spaces, frame views and provide texture and material warmth. The timber soffit will run from inside to the outside, strengthening the appearance of the roof as a singular plane, and ensuring a link between internal and external environments.
With stone walls that extend from being part of the house, to becoming part of the landscape, and with ground and roof planes that do similarly, we ensure that the house is grounded to the wide, open site.

The project gained planning approval in June 2020, and started on site in September 2020 and is due for completion in December 2021.