Spiral House is a Single-Family Residence designed by Ivan Priatman Architecture and is located in Surabaya, East Java, Indonesia. 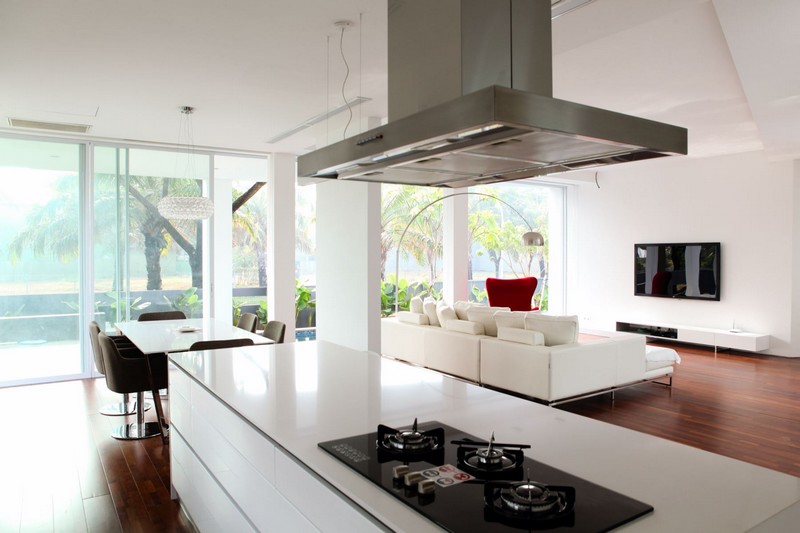 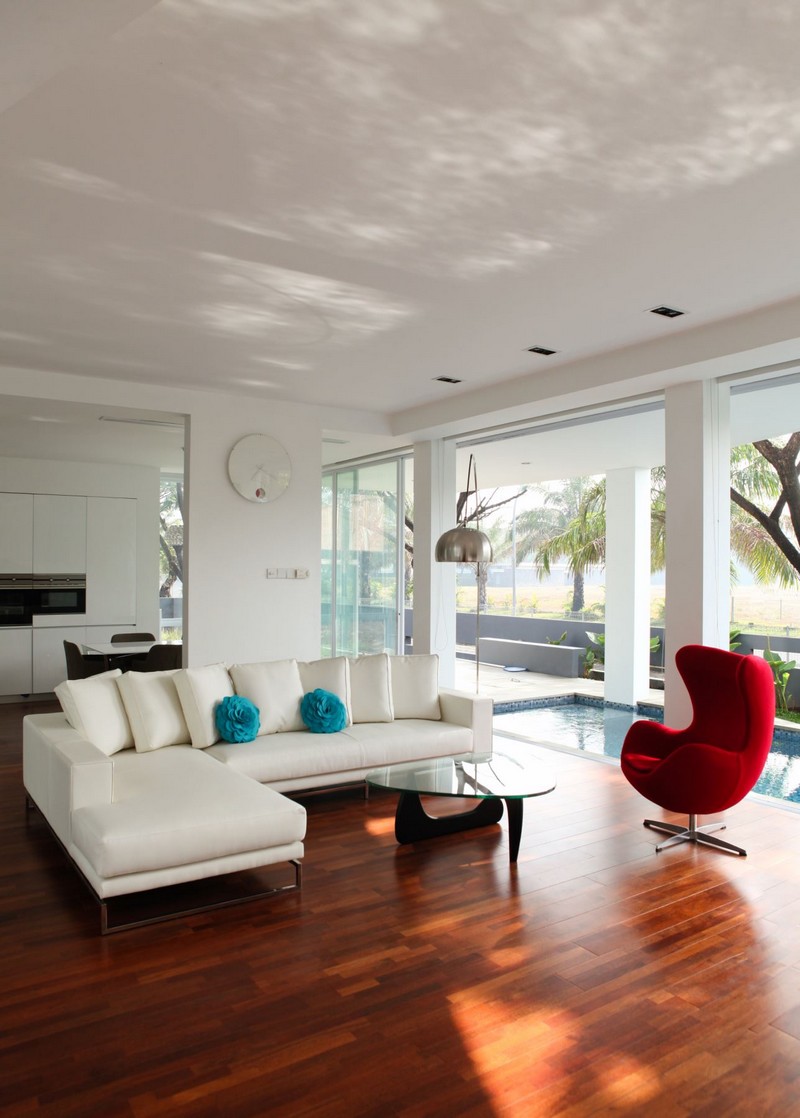 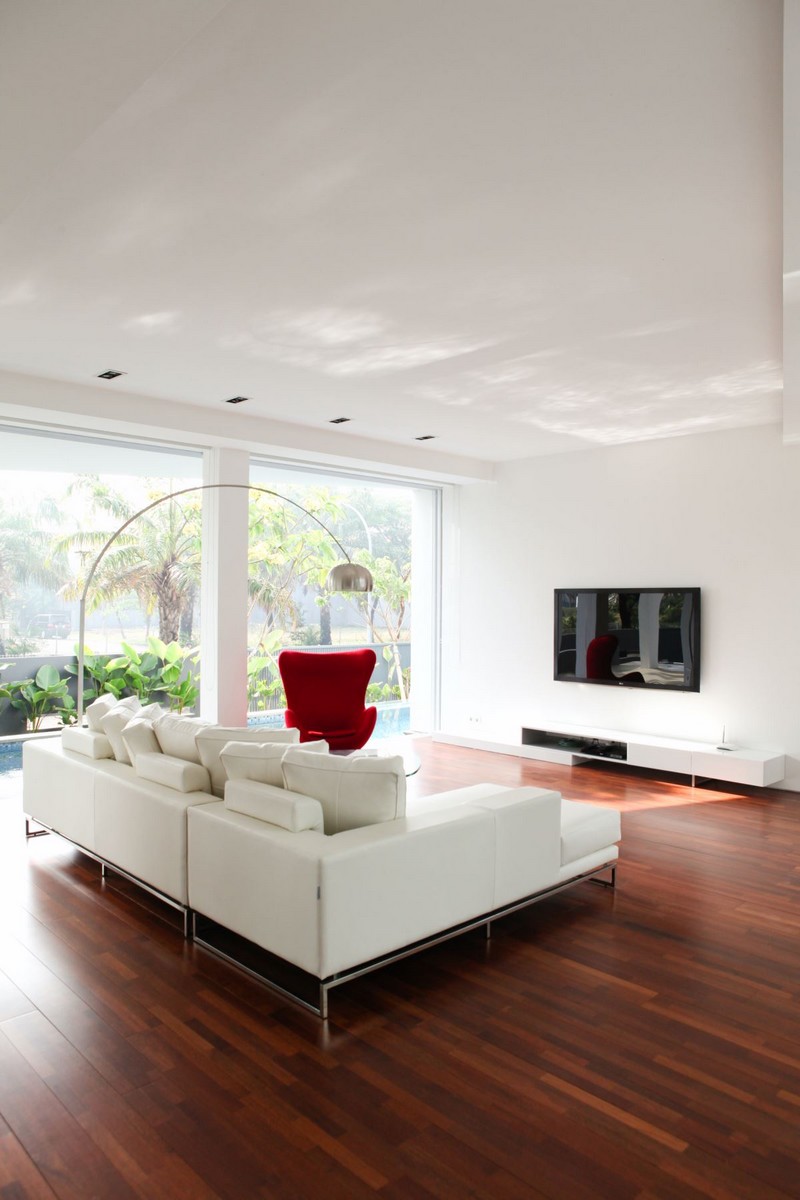 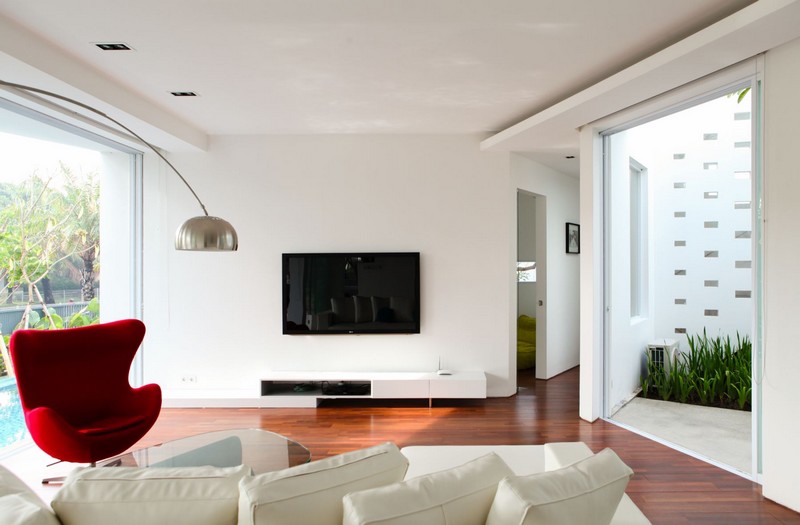 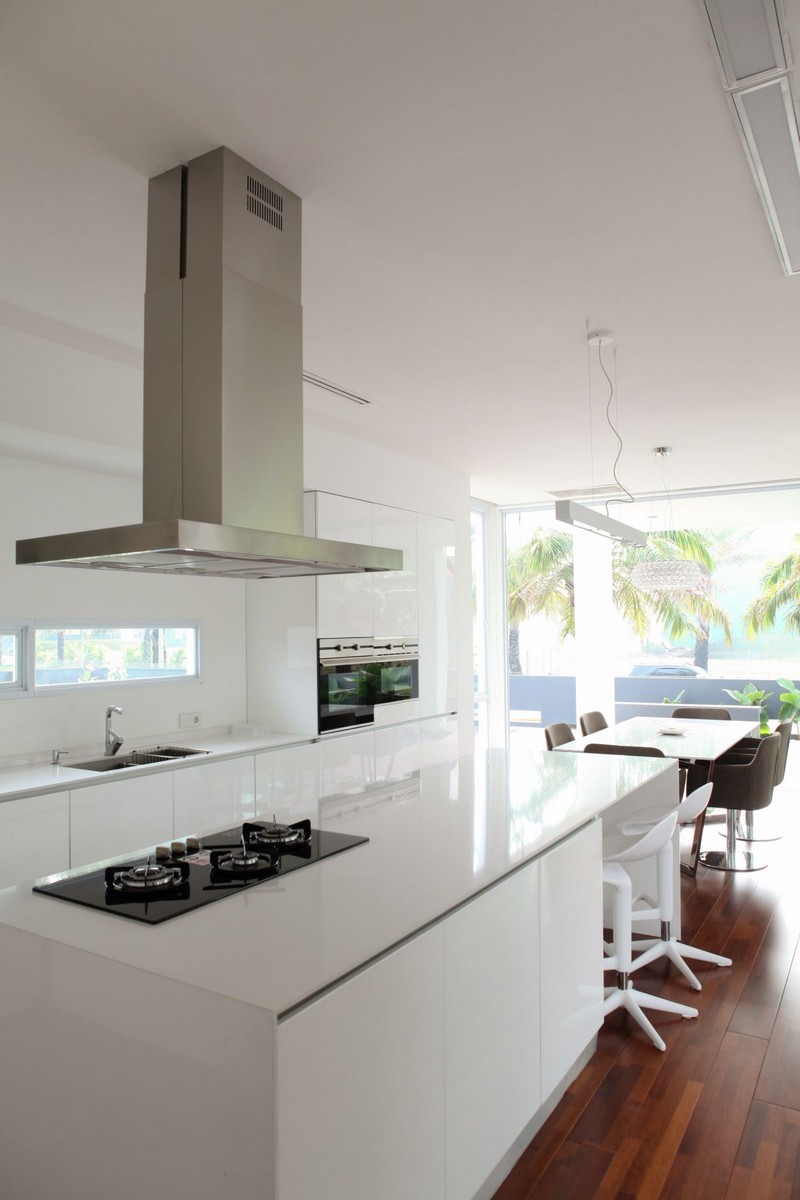 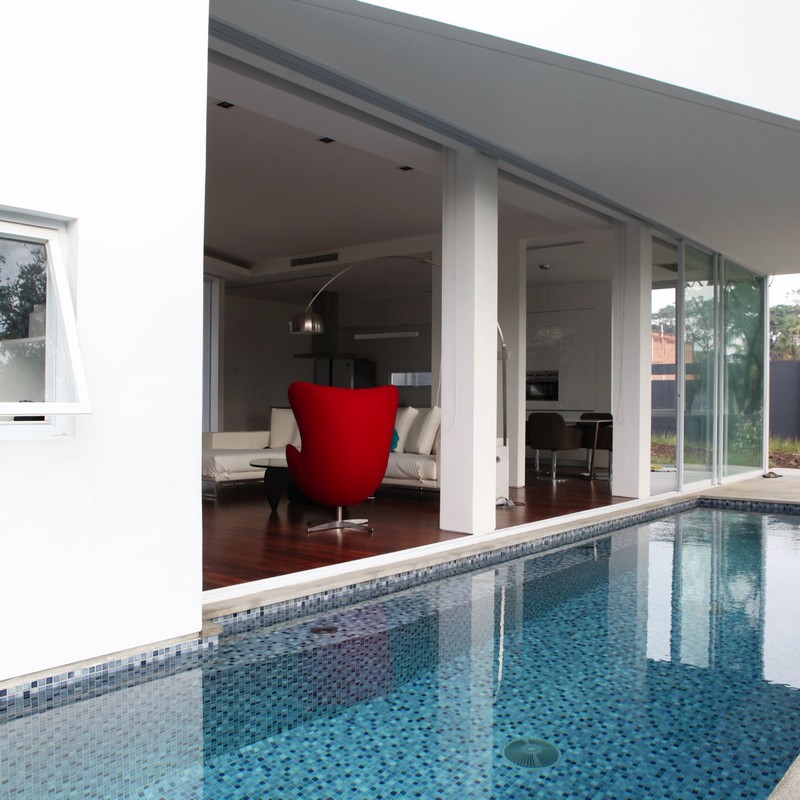 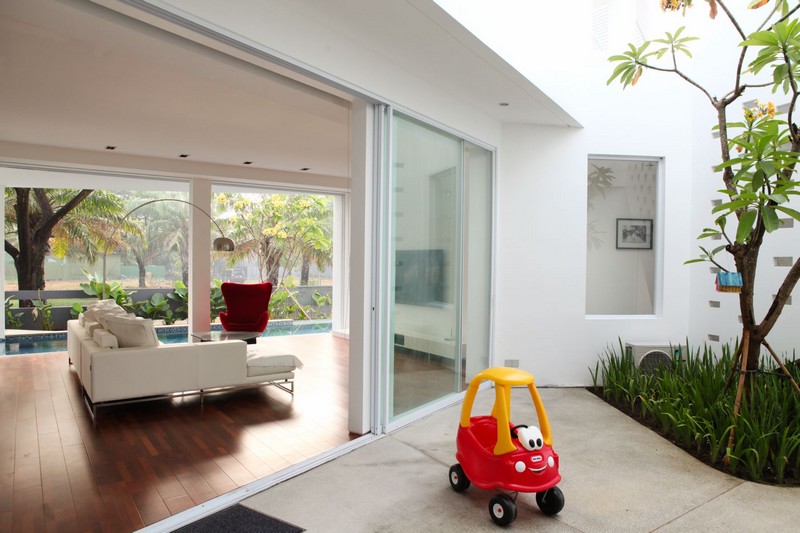 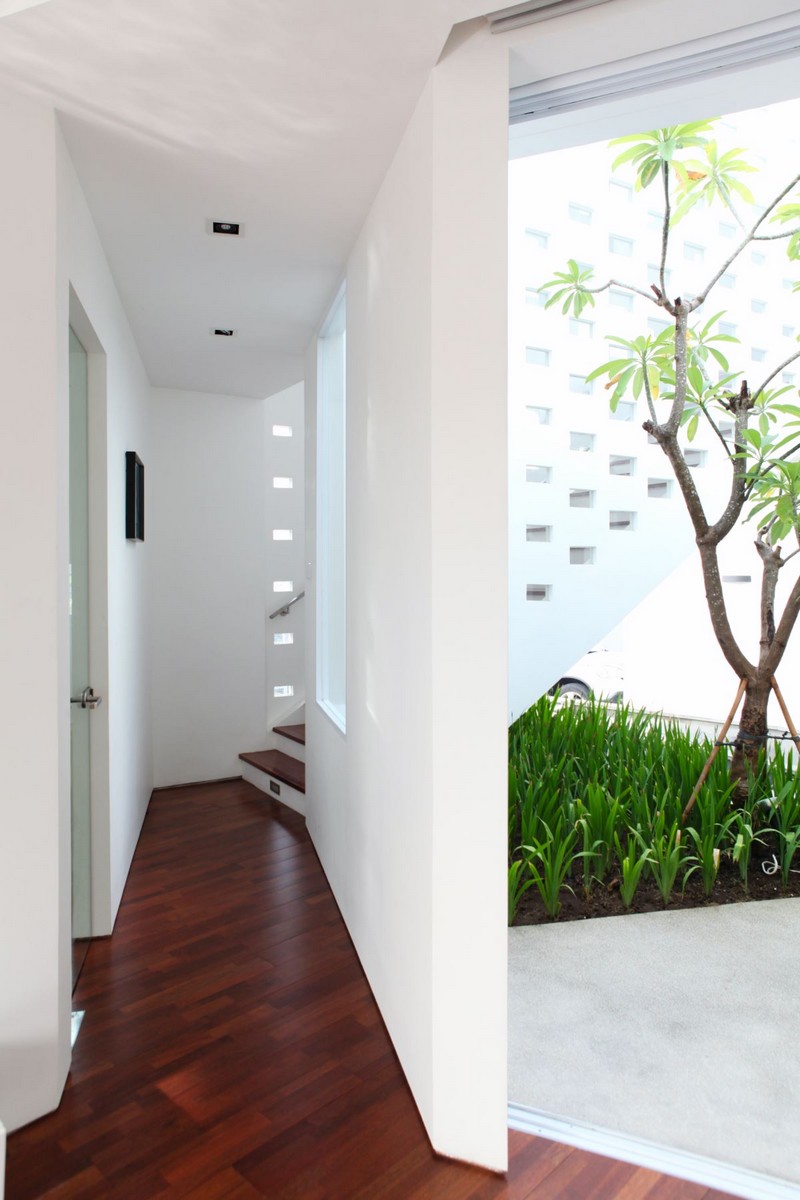 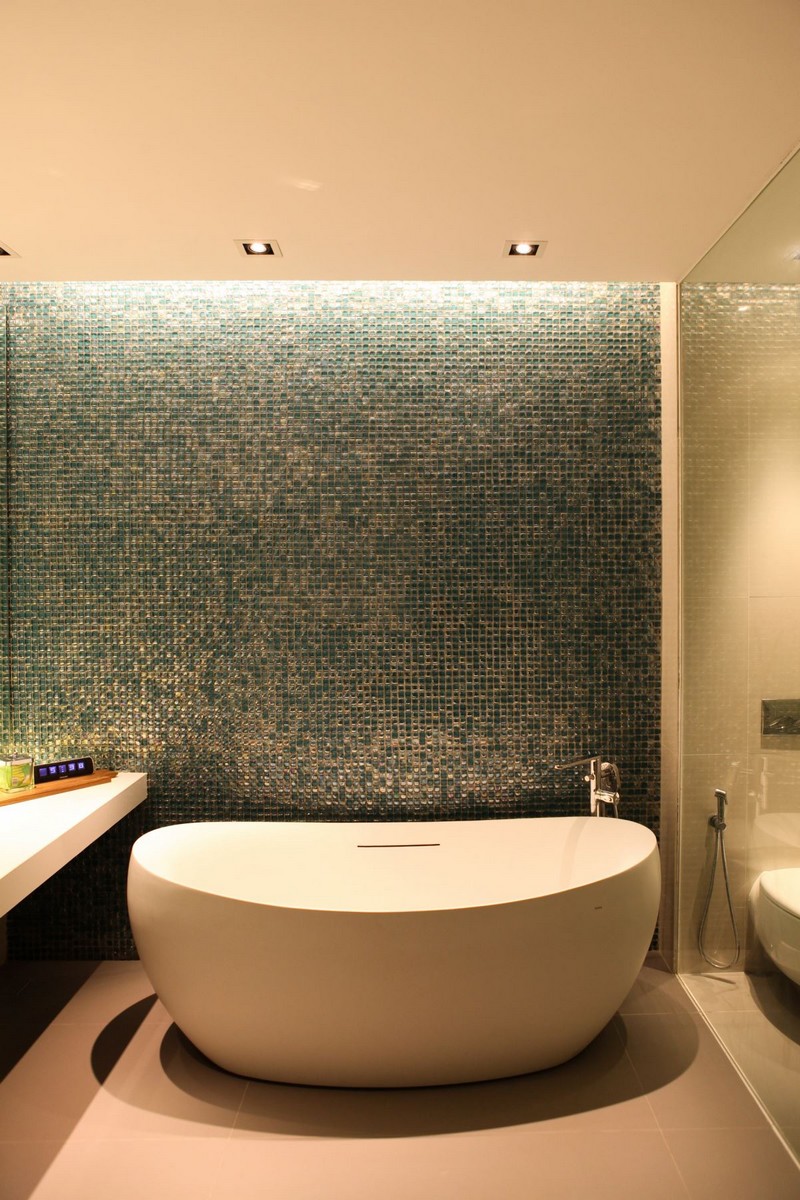 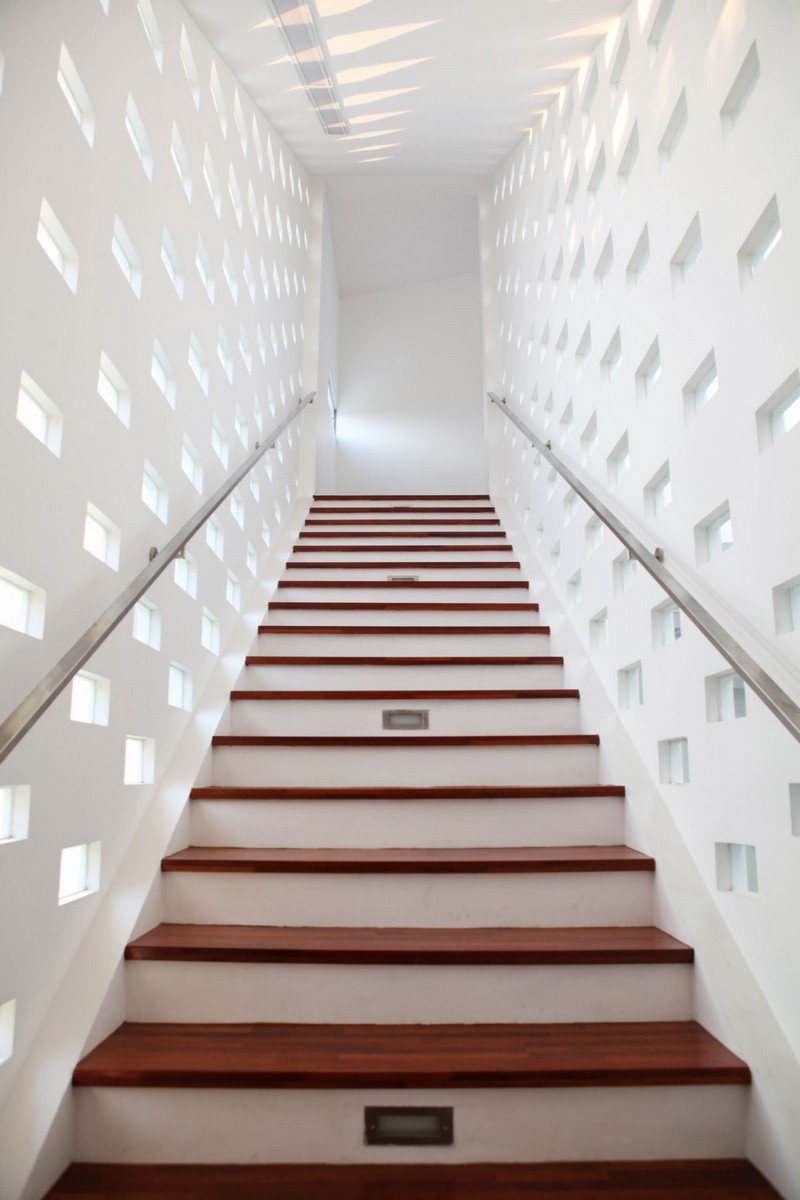 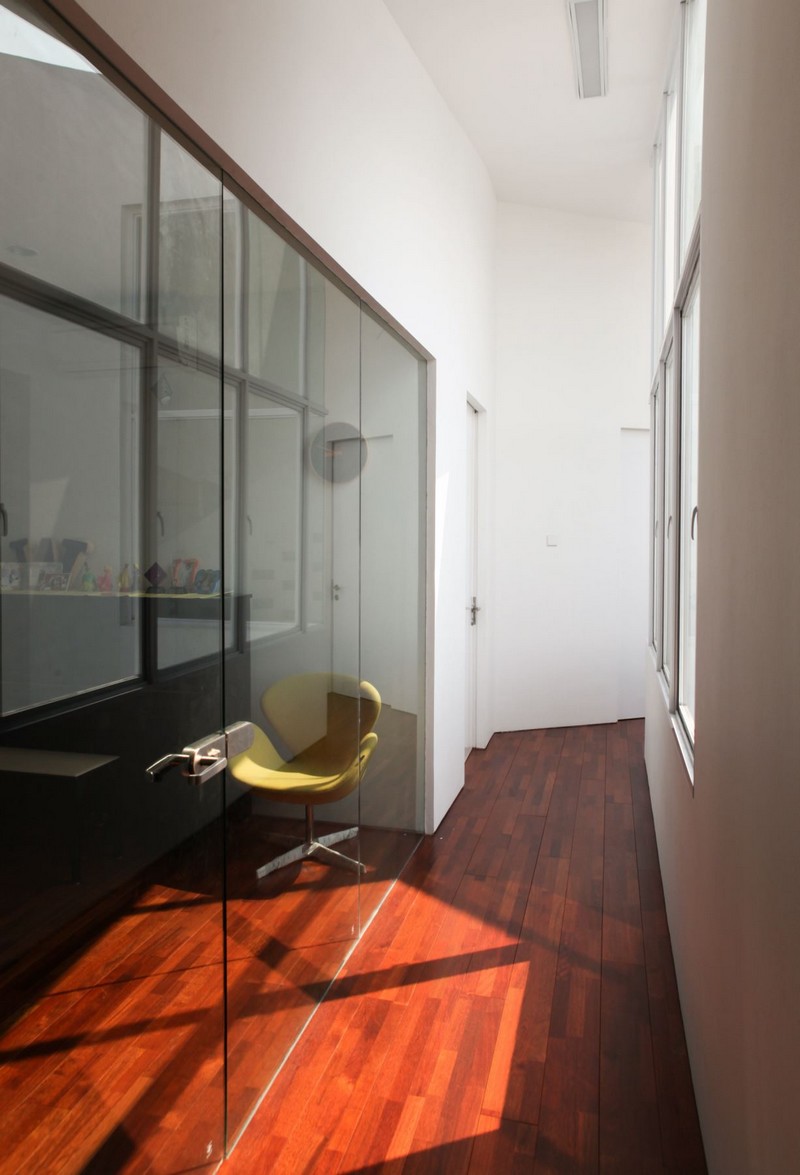 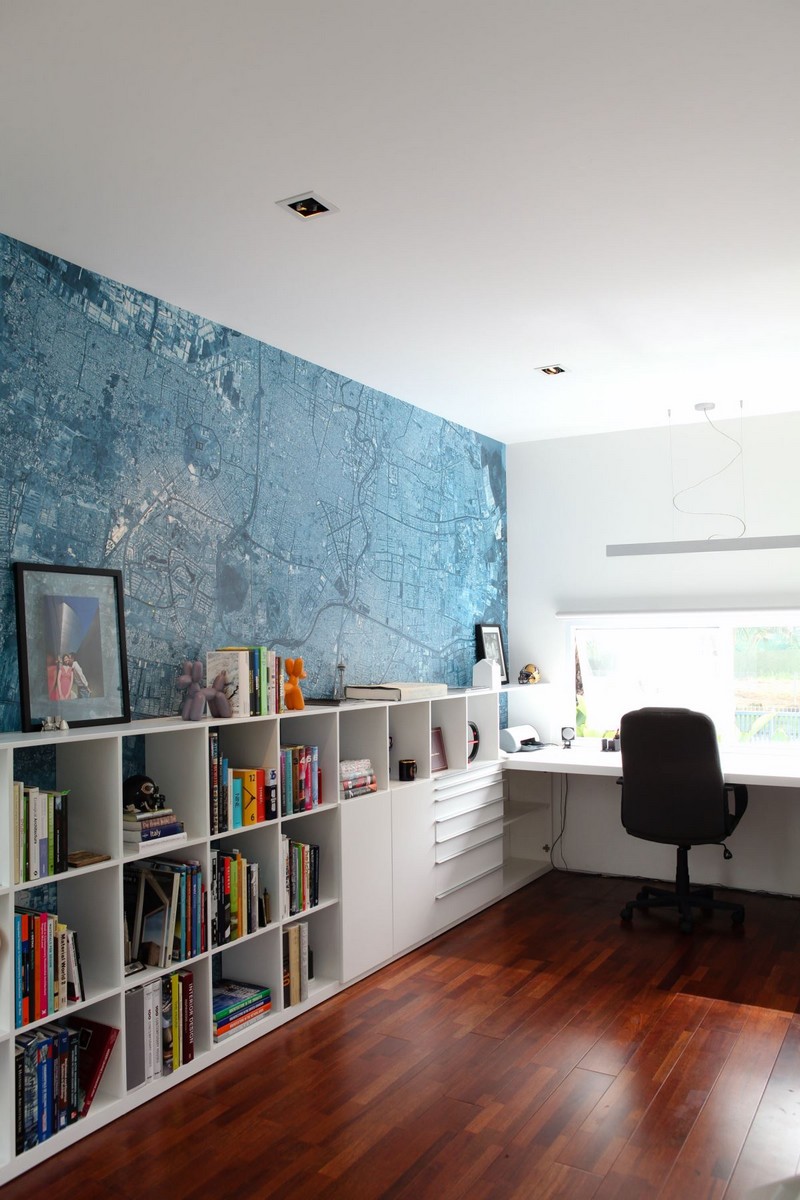 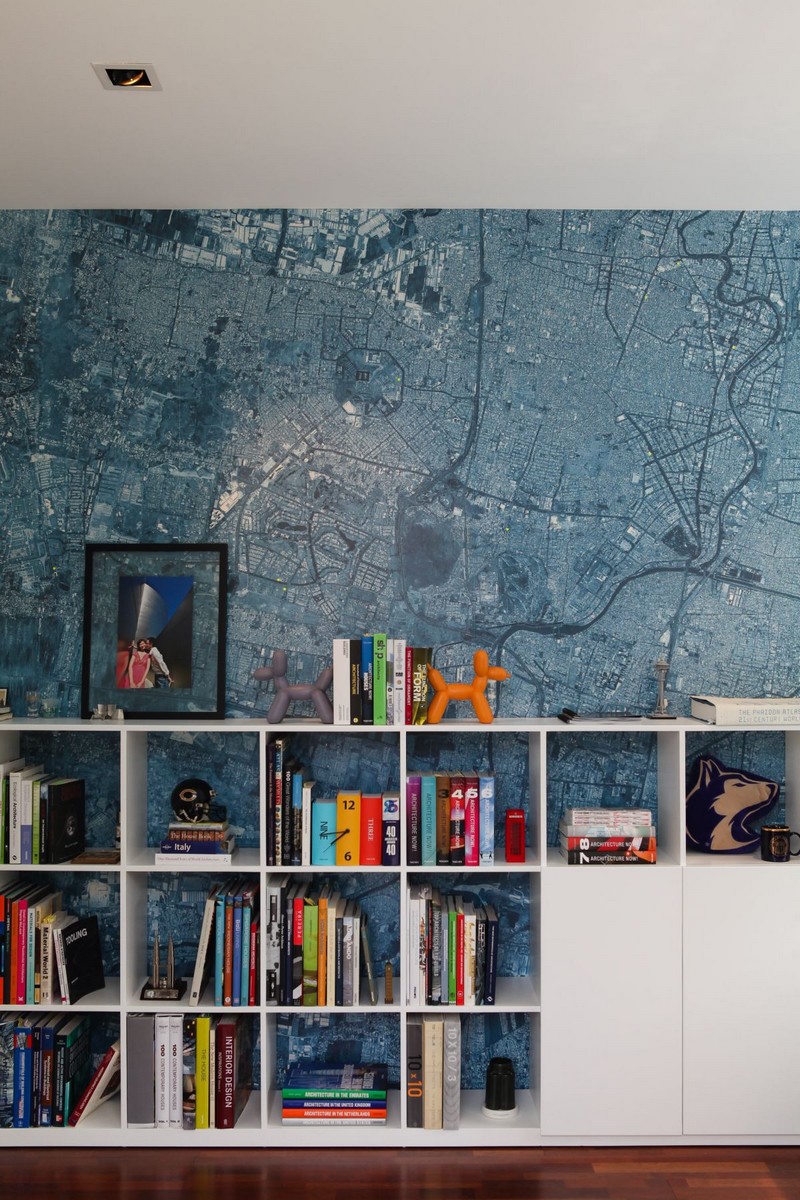 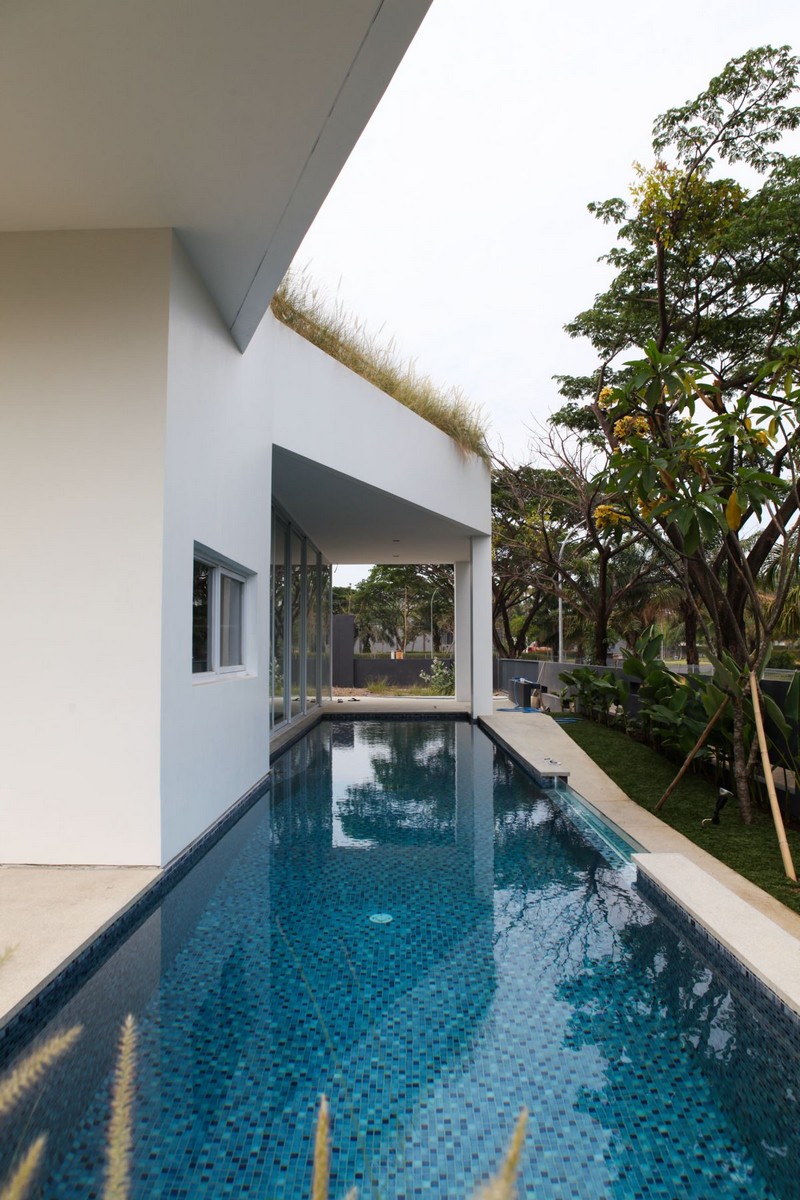 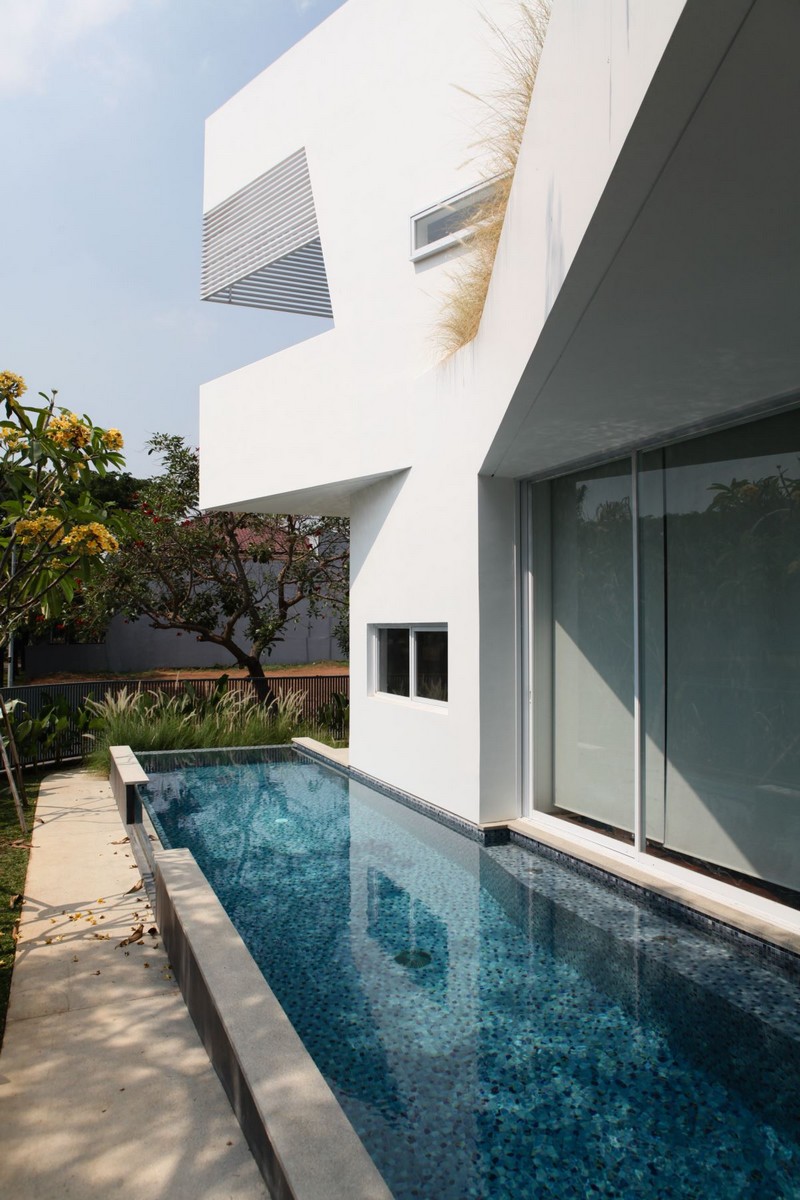 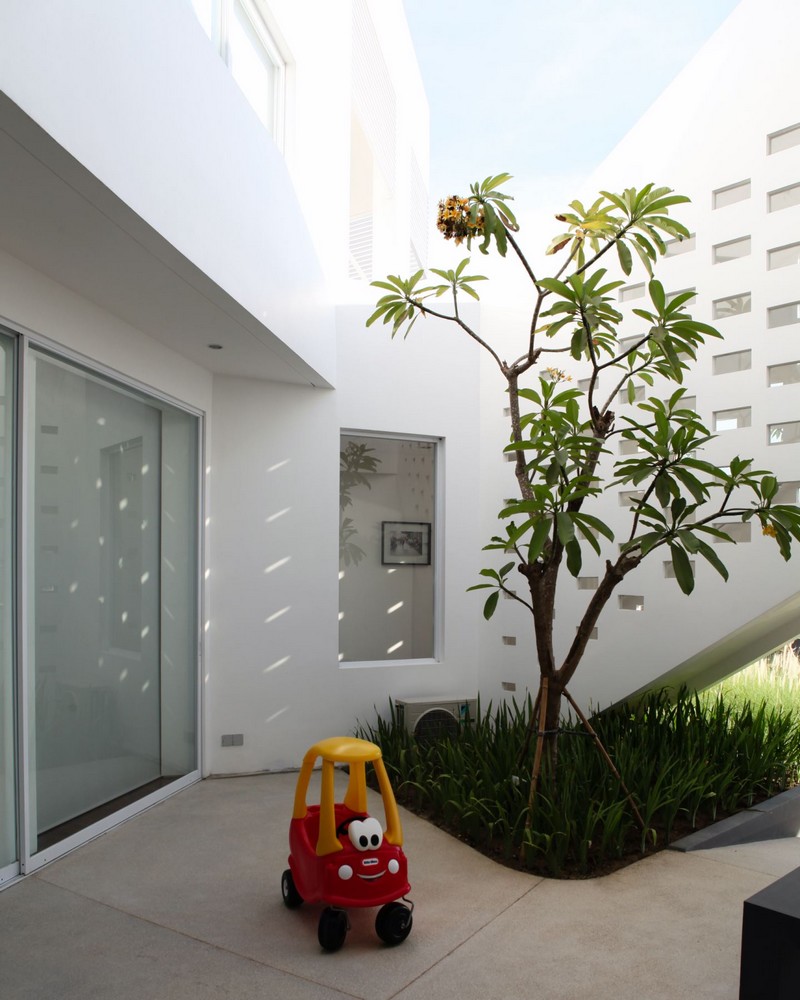 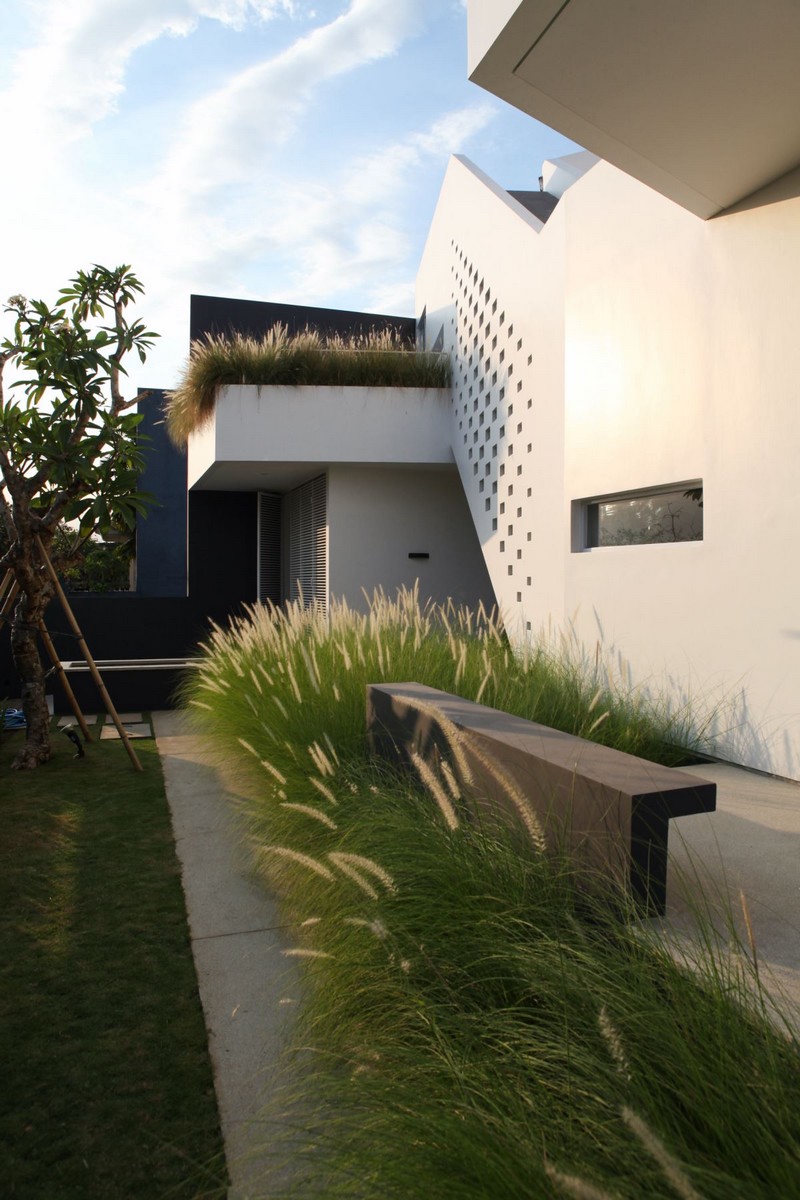 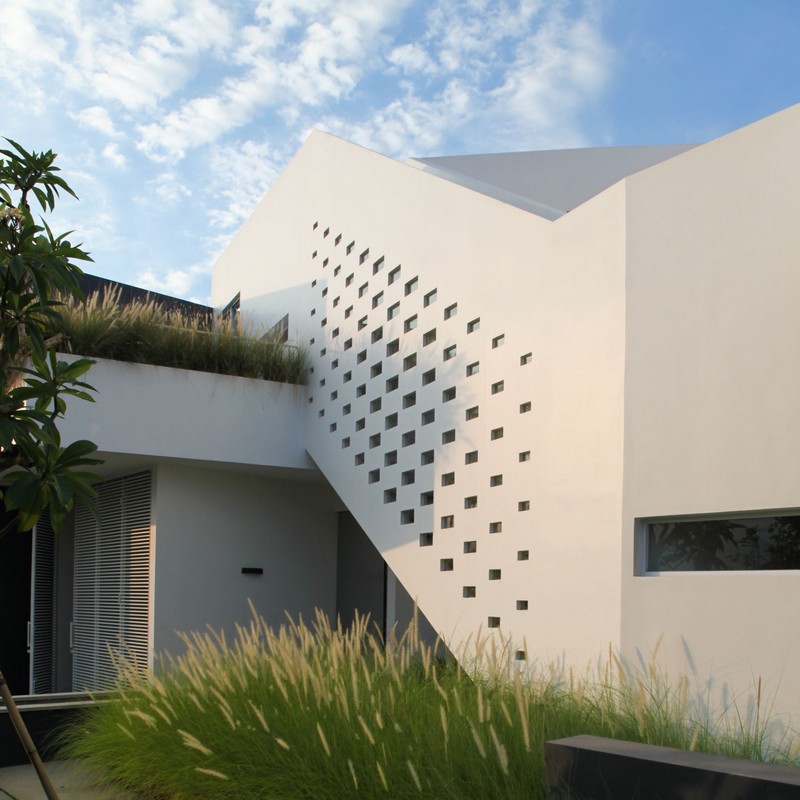 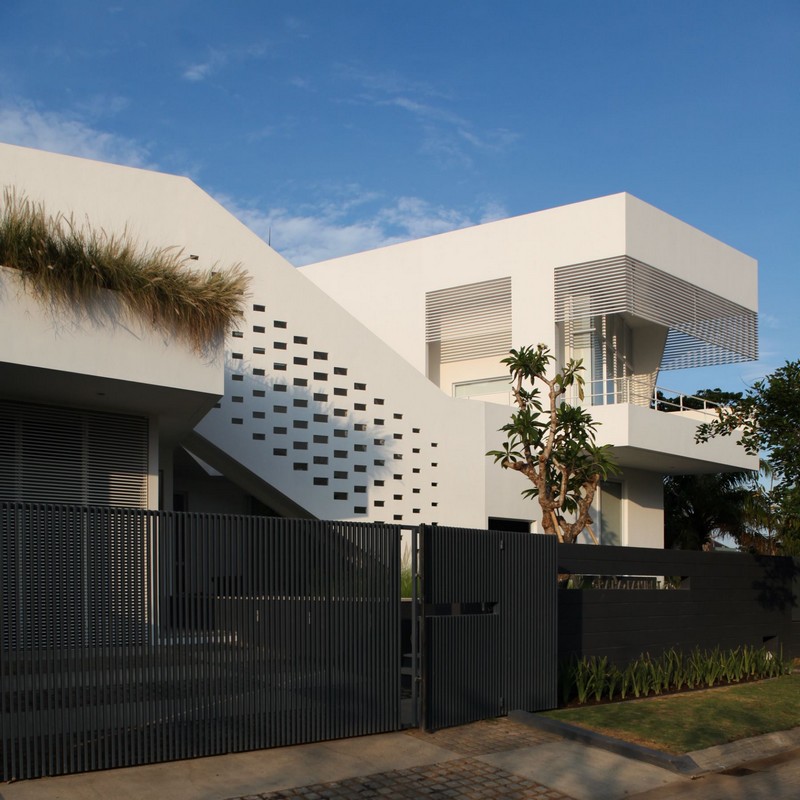 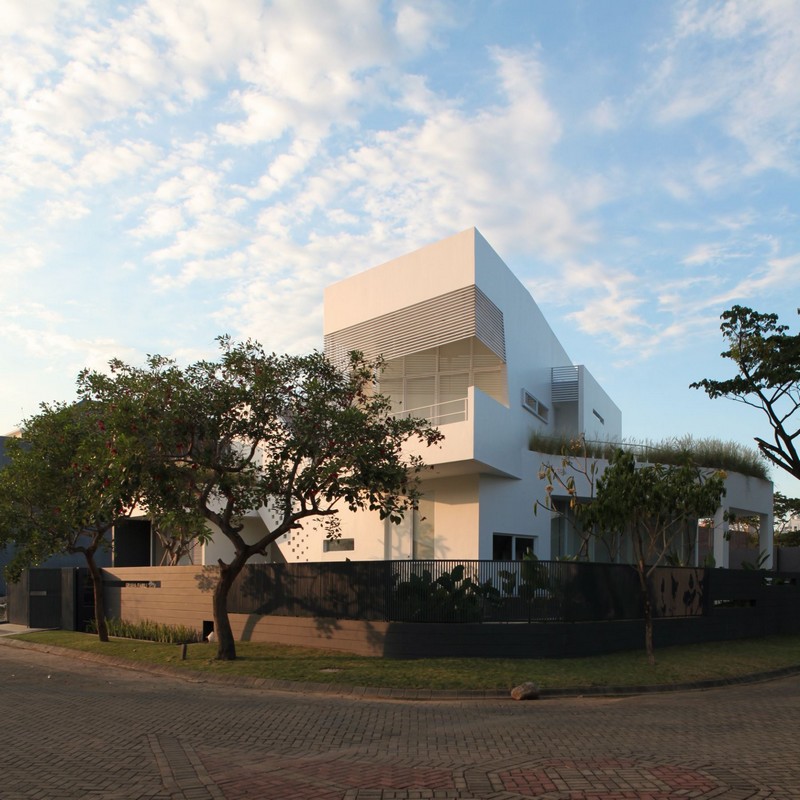 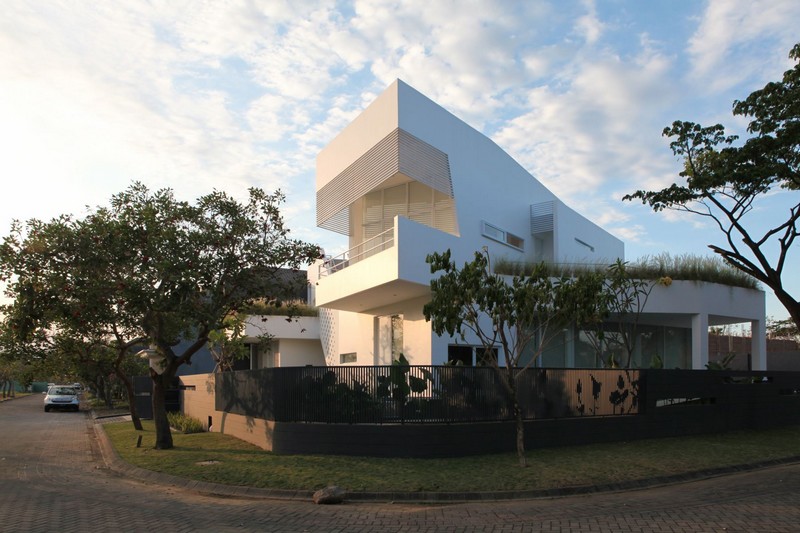 The Spiral House is a residence for a young family of 4 in Surabaya. The site is a rectangular 464 m2 corner lot located in a new residential development in the west of the city, in a condition best described as semi-urban, where houses are grouped in clusters and share a party wall with each other. The brief for the design calls for a courtyard house with indoor-outdoor living spaces.
The program and massing of the house is designed upon the concept of spatial and programmatic continuity. The continuity allows the whole house to be experienced in one continuous sequence starting from the most public area (the main entrance) gradating to the most private area (the master bedroom). This architectural concept unfortunately mandates a long thin mass which would not fit the site that is relatively square in proportion. As a solution that becomes the parti model of the house, the elongated mass is folded several times to create an angular yet continuous spiral, that then also define the central courtyard of the house. Antithetical to the typical middle-upper class house where a void is usually placed indoors above the living room to make the house appear grander, here the void is placed outside in the form of the courtyard to signify a paradigm shift that places nature in a more central role in residential family living.
The living area of the house is located on the east side of the house on ground level to take advantage of the prevailing wind for the majority of the year from the east. The floor-to-ceiling sliding glass doors around the house’s primary living area blur the boundary between indoor and outdoor, bringing the natural environment inside and creating an indoor-outdoor living. When doors are opened, the side yard, the living area, and the courtyard becomes one connected indoor-outdoor living space that is naturally ventilated. The courtyard and the swimming pool becomes an extension to the living room. The house embodies the essence of indoor outdoor living in the tropical climate where deep overhang is desired to shelter spaces from the weather.
Tropical landscaping is designed both in the side yard and also the courtyard not only to create privacy and spatial separation from the street but also to create a microclimate so that the air surrounding the house is cooler and thus the prevailing east wind is cooled before it ventilates the house. The partly shaded swimming pool provides an additional psychological cooling effect to the indoor environment while also creating a feeling of serenity to the living and dining area.
While the first floor is mainly rectangular to maximize space, the second floor is at an angle; the end of the house points due south to frame the view to the green space on the south and to avoid facing other houses in a frontal manner. The thin massing with operable openings on opposing sides allow for cross ventilation.
By using natural ventilation and by the orientation of the house, the use of air conditioning, which has become a mandate for all living spaces in Surabaya’s hot and humid weather, is significantly minimized. The thin floor plan also allows for ample daylighting and further energy savings.
The house uses a reinforced concrete structure with Autoclaved Aerated Concrete brick walls. While reinforced concrete structure is the common building tradition in Indonesia, the use of aerated concrete walls for private houses is not. Brick walls are the most commonly used materials due to the cheap cost and greater availability. Nevertheless, the aerated concrete walls are used in this house to provide greater insulation against heat and sound, and also are helpful in reducing the structural load of the building. The constrained palette of white walls and clear glass as exterior finishes make the house stand in stark contrast with the surrounding neighborhood of custom designed, eclectic houses. Solid wood floors are used throughout the interior of the house.
Photos by Ivan Priatman Architecture