From the Seine to the Mediterranean is a project designed in 2015 by Egue y Seta, covers an area of 78m2 and is located in Barcelona, Spain. 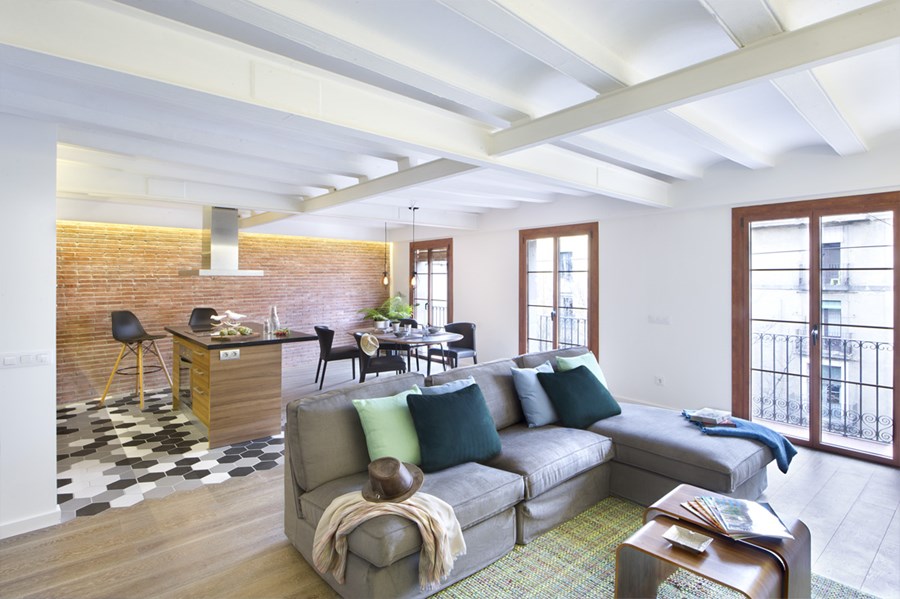 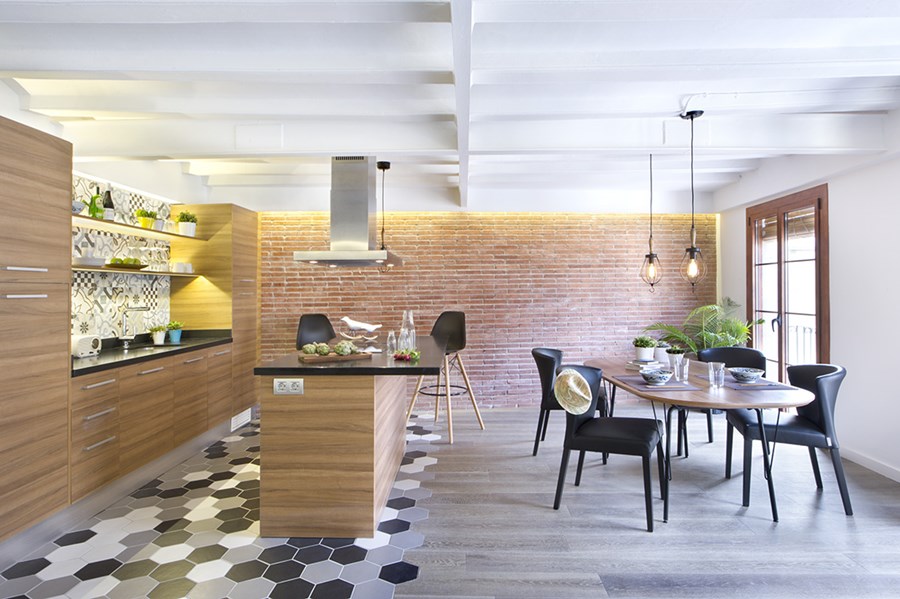 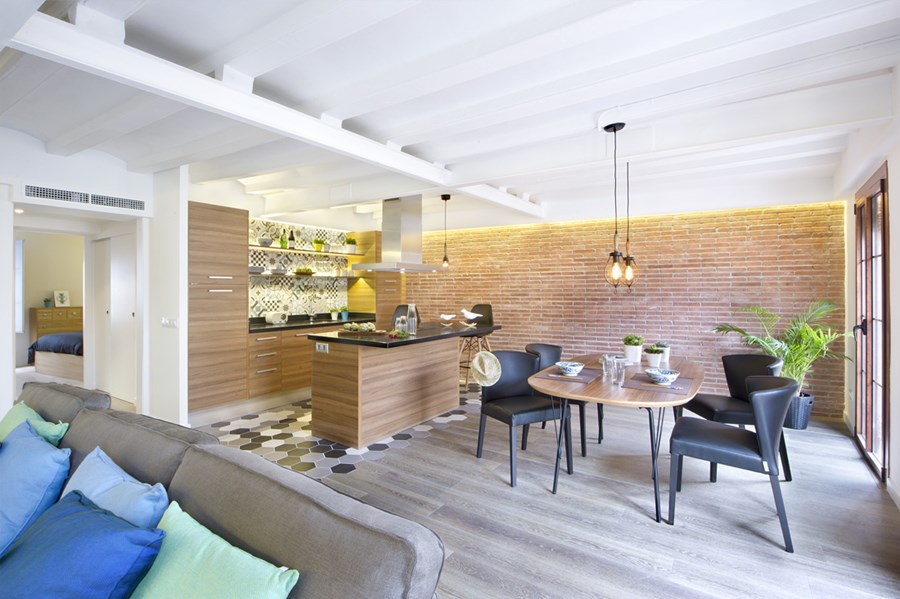 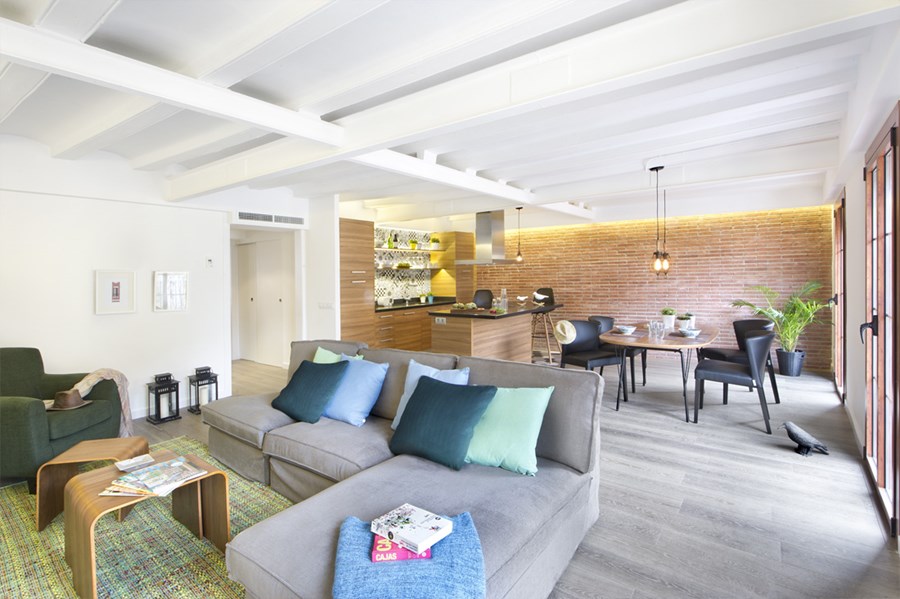 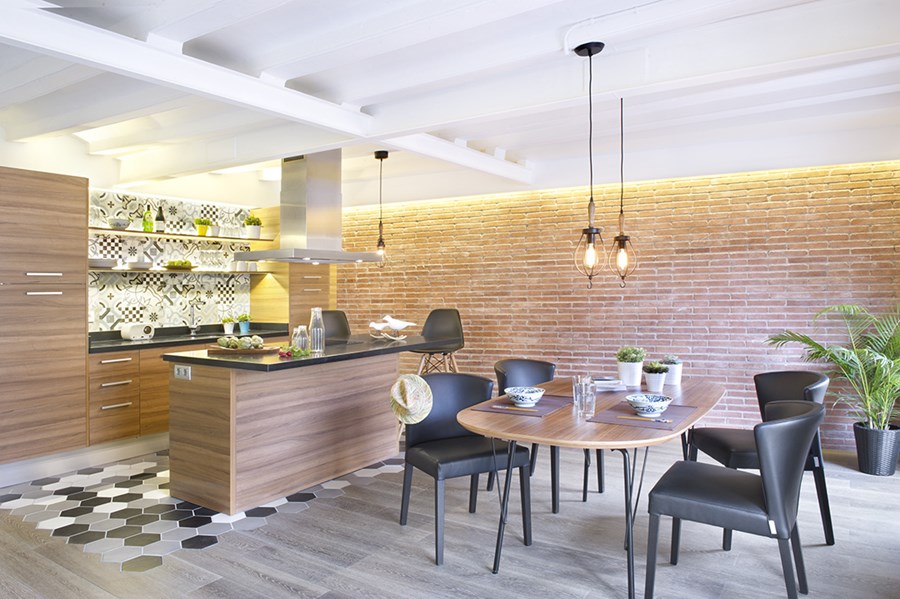 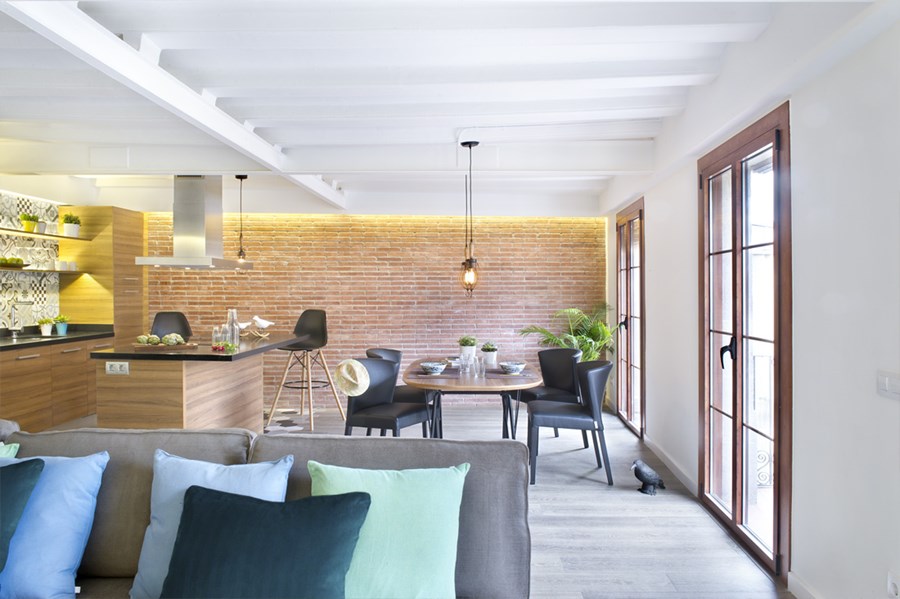 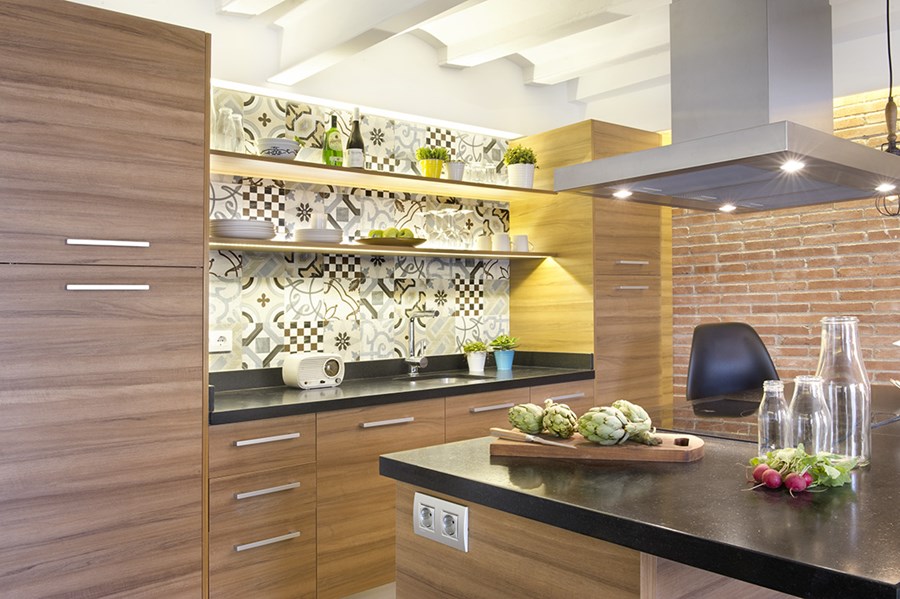 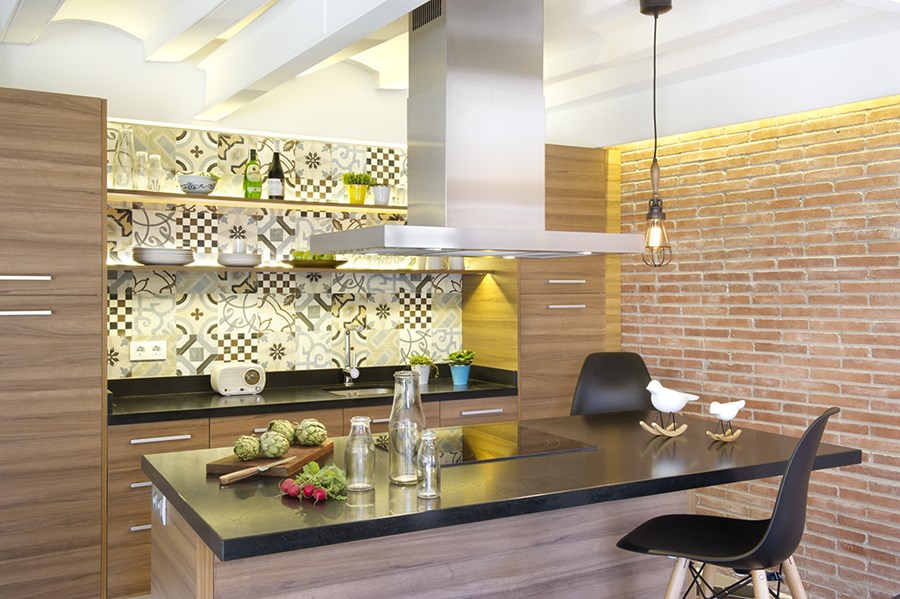 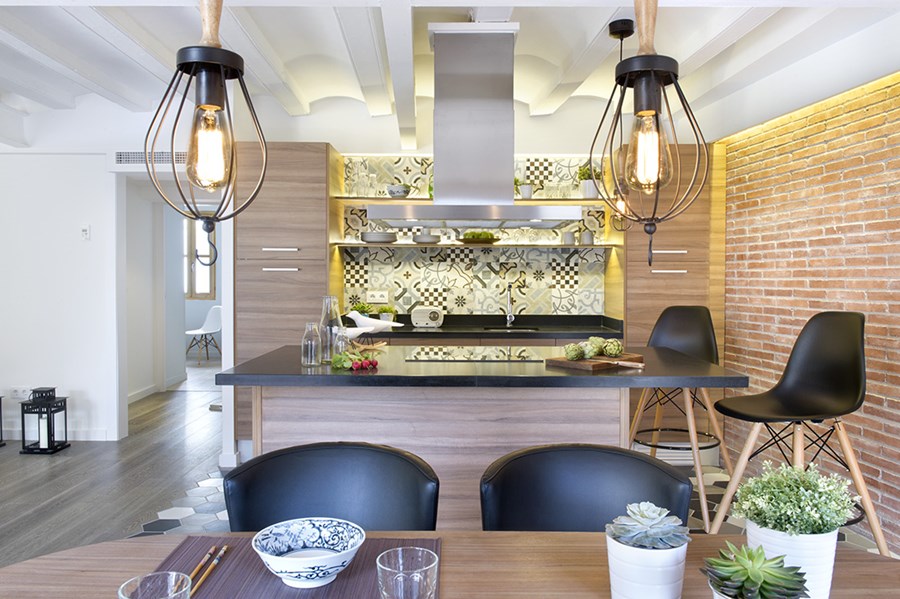 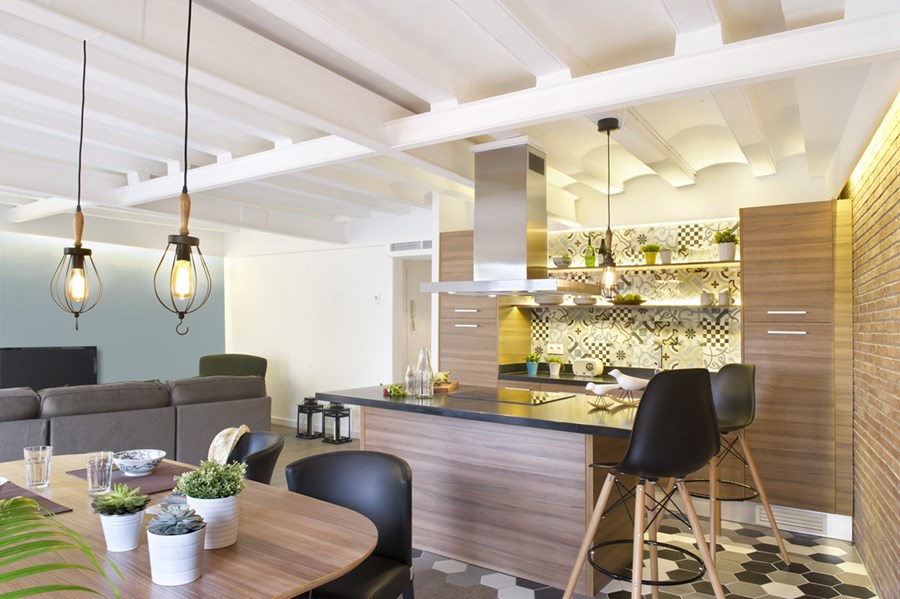 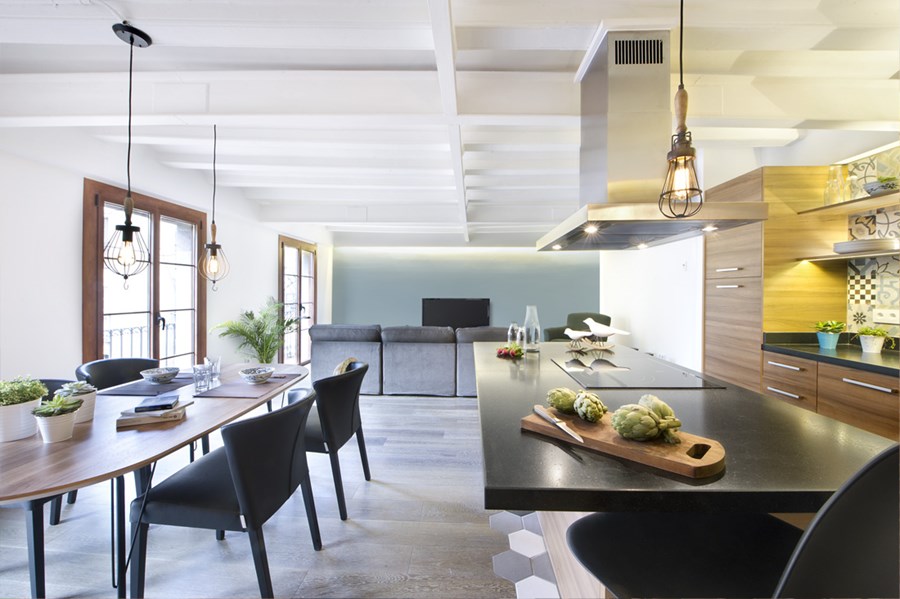 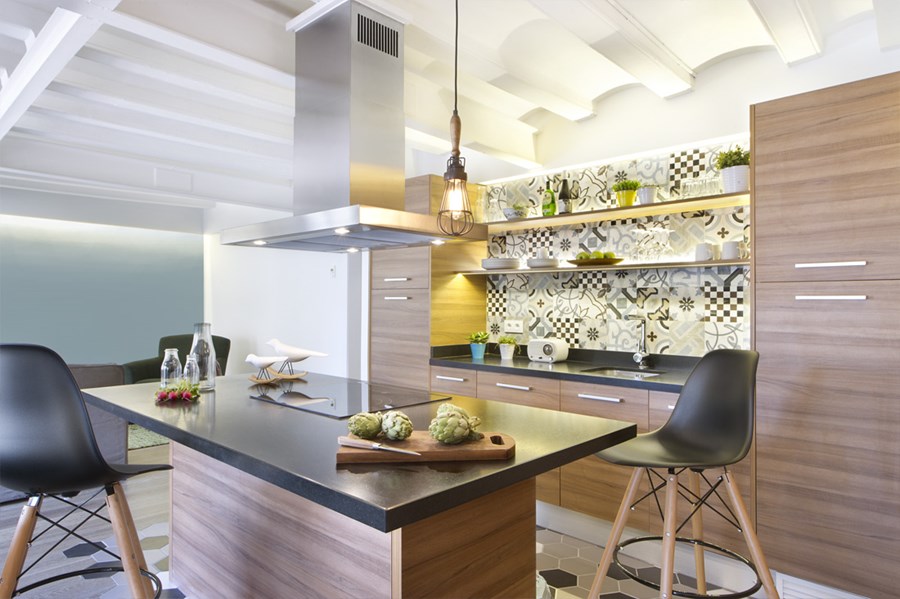 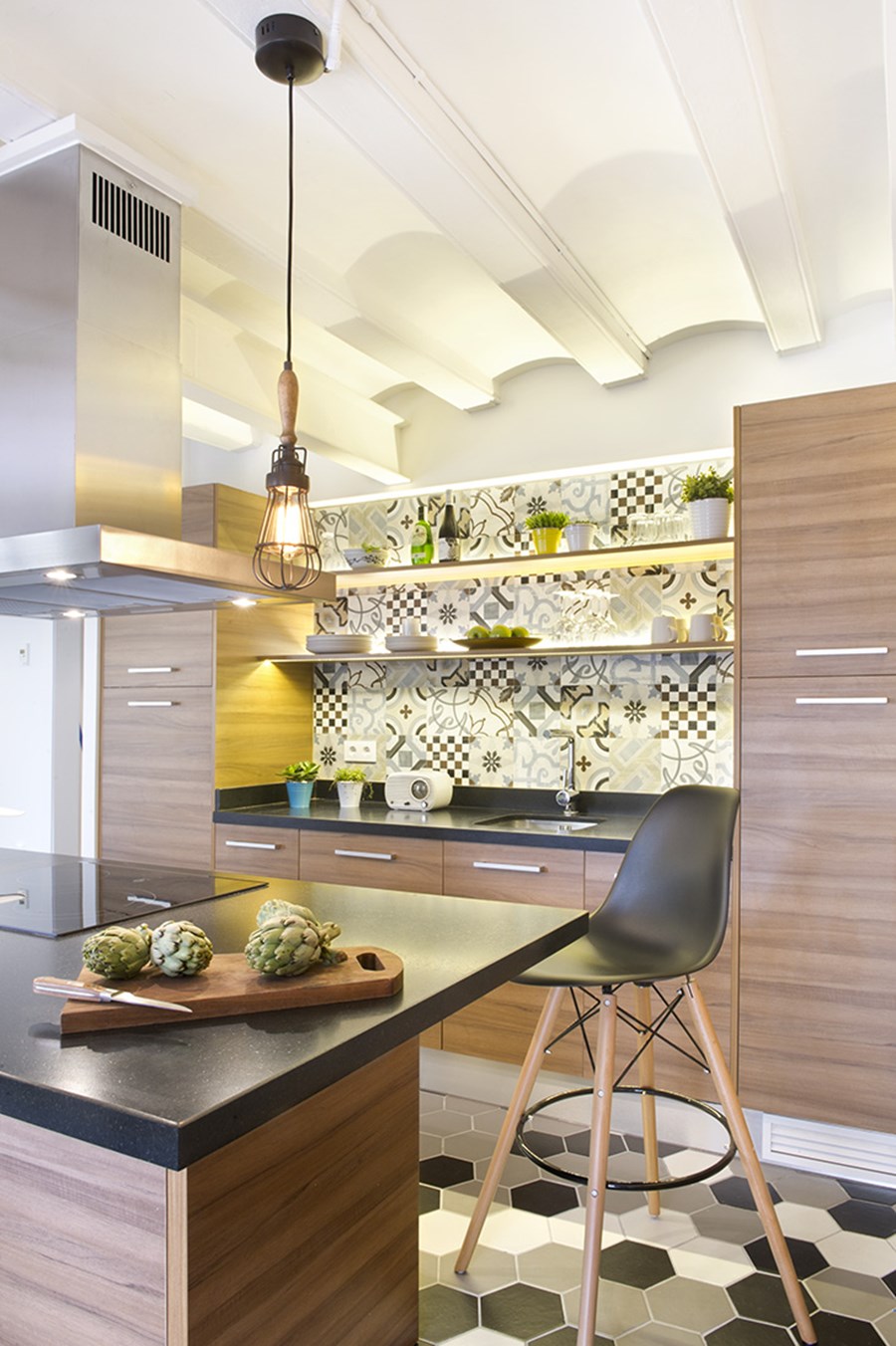 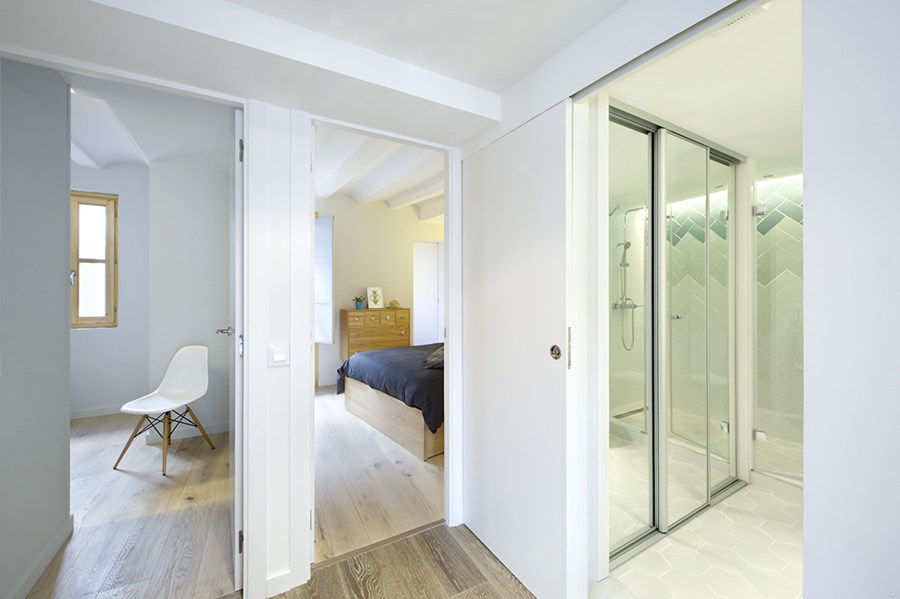 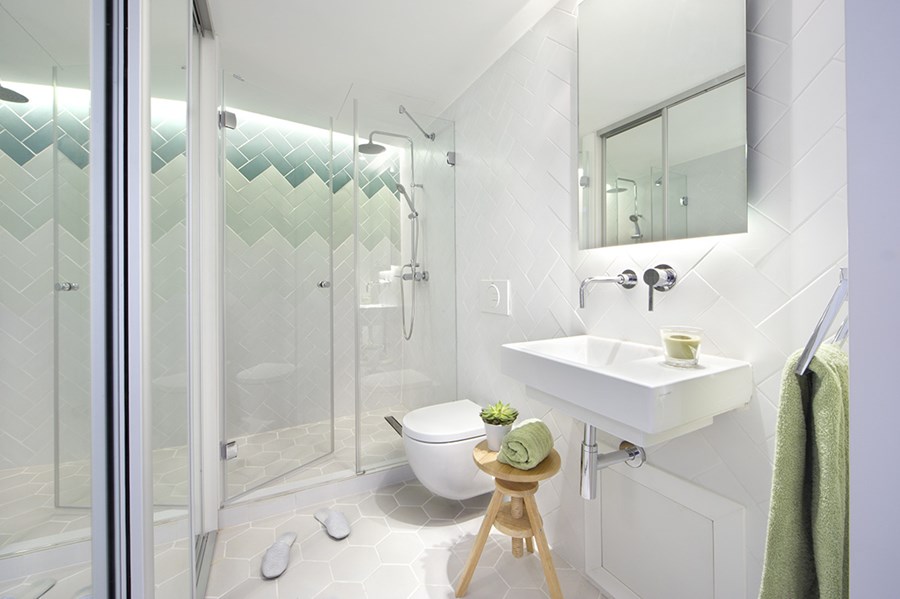 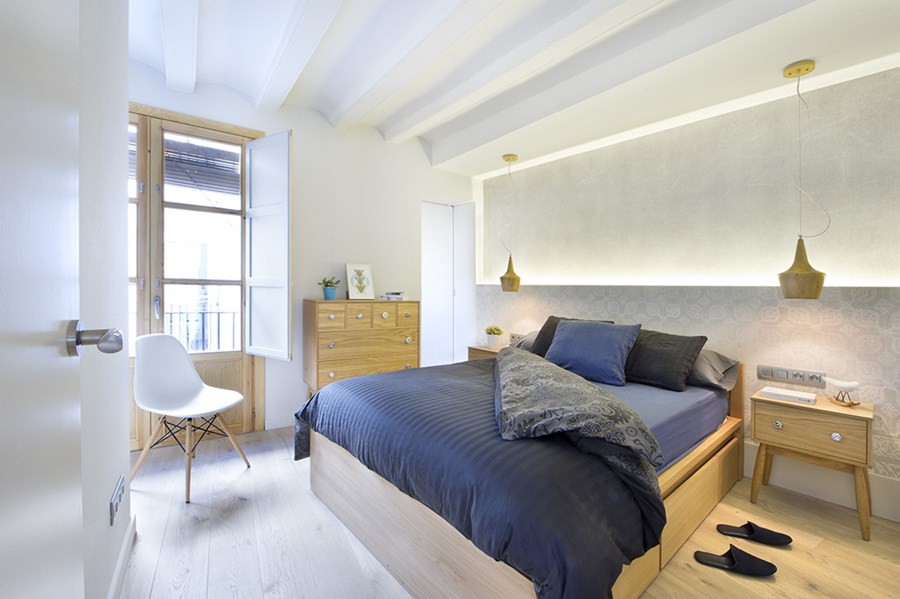 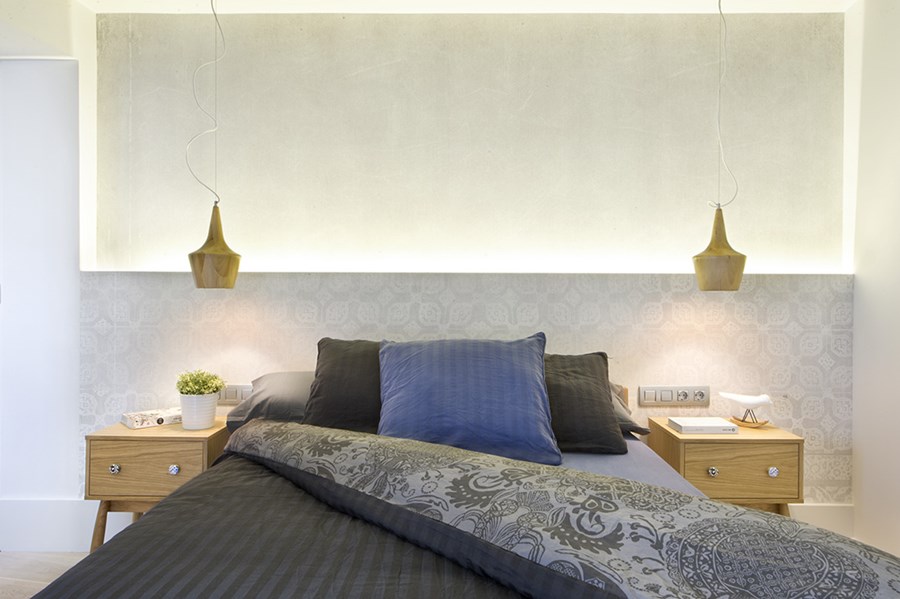 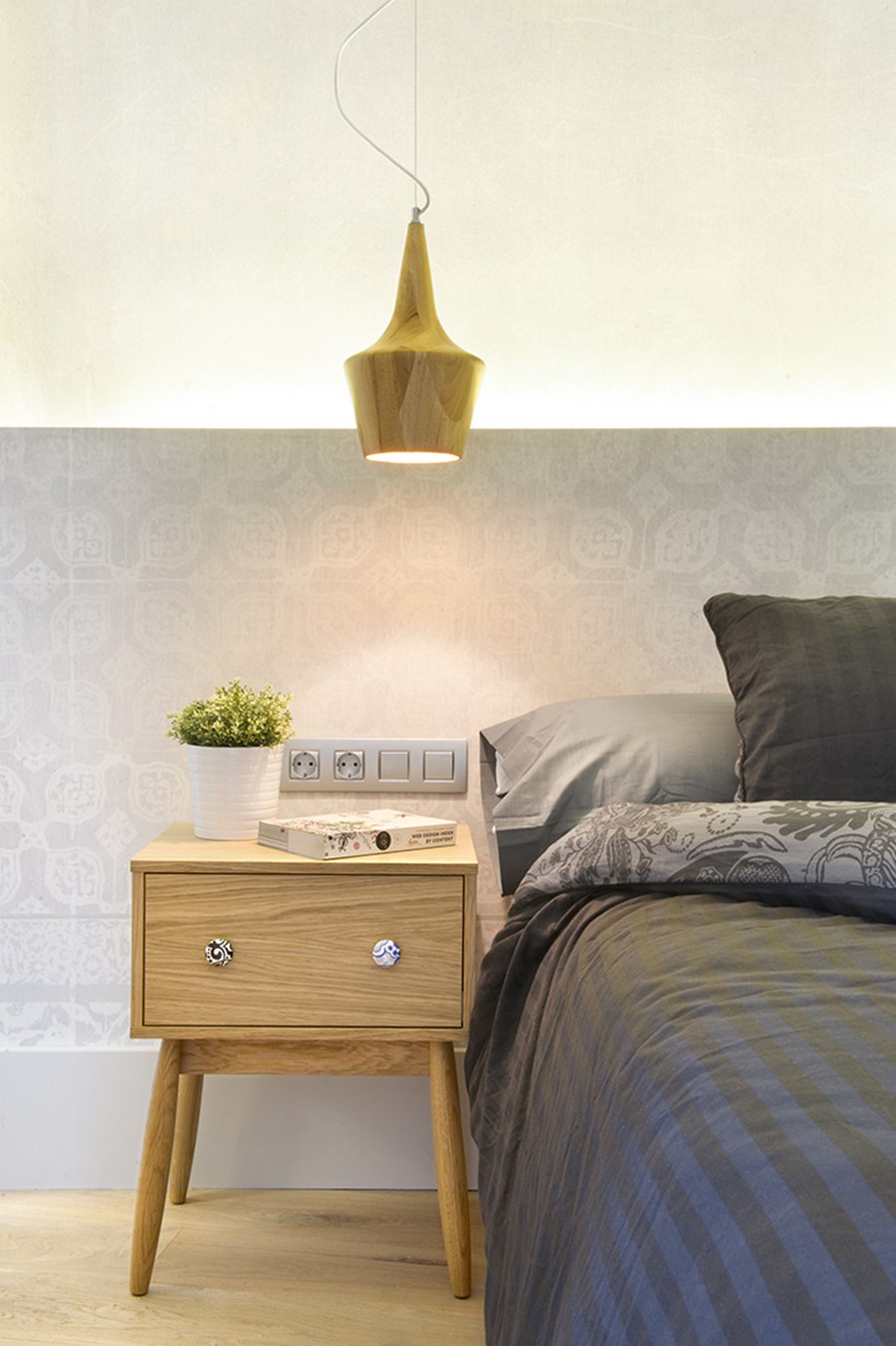 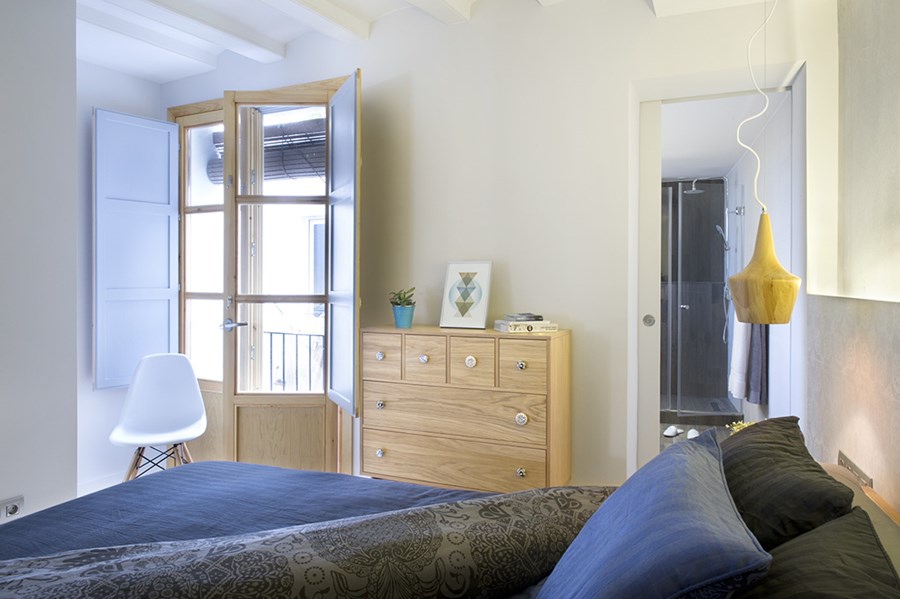 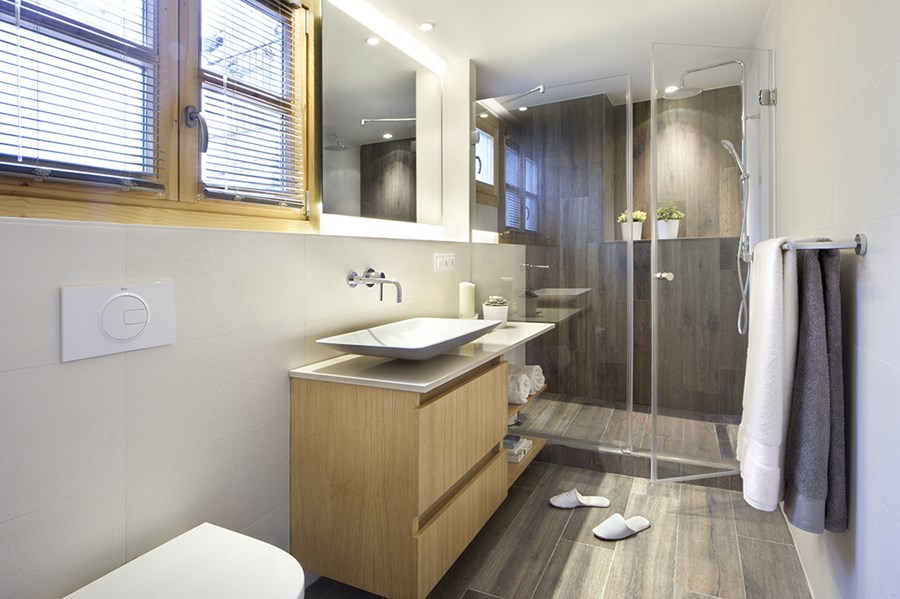 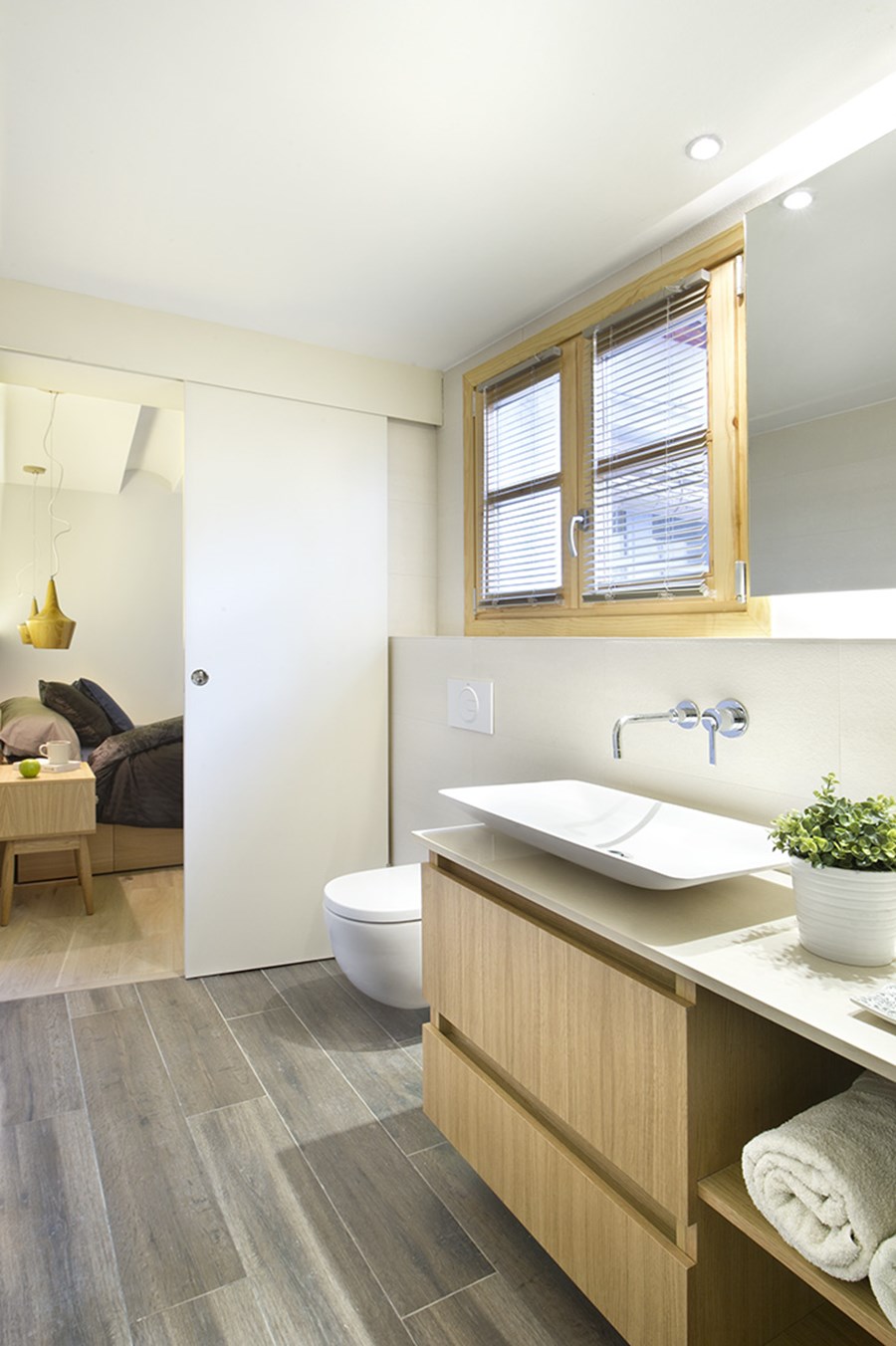 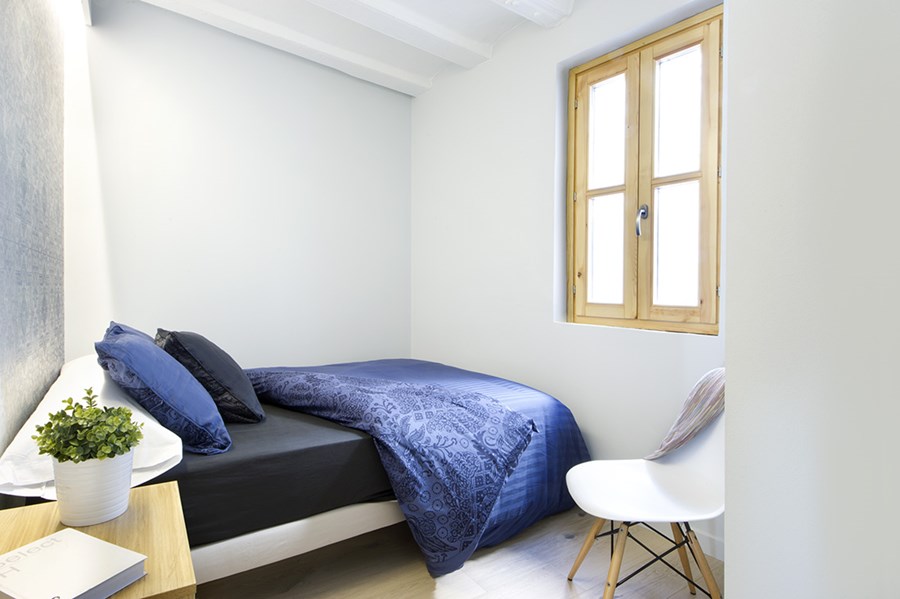 Say you love Barcelona and you rather take little monthly trips than embarking on moth long exhausting holydays. Say you hate mini bars, wake up calls, bellboys or those useless hotel hairdryers. If you favour real homes, with unique style and owners; with full dinnerware or books even if you are on vacations, you know we can be talking about some 6k worth on accommodation expense per year, without VAT or the famous all inclusive wristbands.

If more than merely a wish, this is a “lifestyle” you plan to maintain up until the moment you definitely move to the grave (say in 50 something years), suddenly we´ll be talking 300k (euros that is, ´cause it’s about time we give “pesetas” a rest!)

Imagine now you can count with the tip of your fingers all those bill notes carefully folded on your swollen pocket: Would rather gradually transfer all that in to someone else´s account? or are you more inclined to invest it in a hot property in the neighbourhood with the highest hipster density in Barcelona? Please also, bear in mind for this much you might be doing some 80 year old couple (affectionately) a favour, by taking off their hands and backs this decaying but full of potential apartment. In return you´ll have the house you´ve always wanted in the city of your dreams; getaways without check out date and a home away from home. While real state prices are still on the low, the economic recession seems to be finally receding. This might be just the time you´ve been waiting for: The whimsy expense is finally looking more and more like a wise investment!

But don’t take my word for it. Let me introduce you to our middle-aged French duo: Monsieur et Madame Desbois (Marie and Jean Phillippe to their closest friends) though I know you know these are not their real names. They absolutely love Paris, of course, as the Gallo God will have it and as it is clearly stated in the first of “les dis Commandements”, but they also love to scape from it: swapping the Seine for the Mediterranian, Omelette for Spanish “tortilla”, or Edith Piaff fro local rumba singer Peret. Over the last ten years and every time they could, J.P. and Marie have been coming to Barcelona to walk their soles off over El Borne´s cobble paved streets and to discover new terrace cafés at rate of two per night. Around nine, one evening, they found themselves in the middle of a secluded, unknown to most little square, surrounded by narrow pedestrians streets, altogether very ancient like its name: St. Agustí Vell (the elder). They had a remarkable time under the sodium lampposts that night, and sometime afterwards they went back during day time so Marie could capture in her lenses and hopefully take home part of the their secret spot´s charm. Back in their hotel room and reviewing the shots on her camera screen Marie though she could read a “FOR SALE” sign hanging upon a balcony looking over the square. She ran and showed J.P. and the next photo shoot that took place around those whereabouts is right in now in front of your eyes.

Can the second home of a young couple be similar to that of our grandparents? No too similar! To begging with, provided it has his own bathroom, a single guestroom will do to host the eventual friend joining the trip in the very last minute, leaving all those tiny bedrooms formerly destined for the offspring without a purpose or practical sense. For the same reason the kitchen, living and dining rooms no longer need to be small, dark and separated spaces when they can instead be easily integrated into one single but ample room full of light and possibilities. Vestibule, ante-chamber, foyer: all words from the days of yore the today only mean wasted square meters, that will undoubtedly be put to better use if annexed to neighbouring spaces with a clear practical call such as relaxing, eating or sharing with your loved ones, rather than just stepping over and passing by. It´s true, we didn’t just come up with wood ourselves, nor have we been the first to ever think about using it as a floor covering, but combined with hexagonal mosaic tiled pavement, that delimits at the same time the area destined for the kitchen, we hope it´s been less used in the past and holds up better to the constant mopping; while installed in two different shades (lighter and darker) according to the amount of light each half of the flat (public and private) receive, its surely a criteria less exploited so far. Following the lines of the wooden planks, starting from underneath that superb Habitat rug, our eyes and feet travel from the sofa, until the dining room table surrounded by chairs, that for once are different from the very classic Eames (lets do a very discrete wave ´cause the stools still are) where we sit just as handsome but maybe more comfortably to enjoy the cheese platter, for not all the French are thorough chefs. The whipped off clean plates, as well as our satisfied teeth, gleam under the beam of light shining from a couple of pendant lamps in the shape of whisks.

It hasn´t all been about smiles, though. We had a hell of a time knocking down all partitions that formerly stood in the middle of this ample social area. It took an army composed of a hard headed architect in commander and an infantry of ten mason workers armed with iron props and a beam the size a of a cannon. Always aiming on the nicest, we missed the target repeatedly before hitting right on the spot of the kitchen that fulfilled quality, capacity and budget expectations. Neighbours on their part, remained always up in arms, forcing us to retrench a couple of times. Gladly conflict´s resolution was finally conquered, and now J.P. and Marie live among thy neighbours in a somehow stable state of peace not completely devoid of its fair amount of envy. Cause lets face it: What sort of a life would this be if we could not secretly turn green with envy when looking at our neighbours rad rooftop terrace, his super hot girlfriend(s) or his whacking hot rod? Envy is such an easy guilty pleasure!

Laying out the private realm of the flat was even easier though. Once the toilets were conveniently located according to the position of the building drainage mains, the remaining free space was almost automatically defined and halved by an imaginary line. We dared to slightly push this line aside in order to allow the occupants of each room to lean out of the window and listen to the radio played by the lady on the fifth floor: a lady that plays music one does not find in France (or the whole of Spotify for that matter) at a very Spanish volume. Partly for this reason, thorough windows were ordered. Joinery and crystals with double insulation, thermal, acoustic and almost nuclear break all made in (very expensive) fire and waterproof “Mellis” pinewood, cause it is also nice to sleep quiet, long and tight. That´s just how we picture them right now: placidly leaning, J.P. and Marie, one reading under the light of pending lamp that substitutes that on top of the nightstand, leaving its surface available to place there a cool wooden bird, or some table top cactus similar to those that fill every greenery named board of any Pinterest addict; And Marie, maybe a bit more focused on her word puzzles, her head resting against the mid height headboard wall which they wanted to cover with a worn out cement texture wallpaper tattooed with blue decorative patterns.

Endless lines of indirect architectural lighting were installed to gently grace those accent walls covered with exposed bricks, wallpaper, traditional hydraulic mosaic or common rectangular tiles placed diagonally this time. The warmth of such lighting falls, though it might sound better to say “sheds down” in a yellowish gradient juxtaposed over the ascending pattern of the shower tiling: blinding whiteness gradually fading into a bluish green, or a greeny blue, depending on the reader´s colour-blindness (or his screen´s colour settings). There was no need to resort to the same strategy for each and every wall, for the mural mirrors that camouflage the one but generous wardrobe in the house reflect the effect, while the mirror in front, on top of the sink endlessly multiplies it. That´s just the way they are… The Desbois have more suitcases than drawers, store little travel a lot and will lived happily ever after both in French and Catalan.

Six month later we´ve learned how to correcty pronounce Leroy Merlin (more or less “lehrooáh-marláhn”), we know who to blame for “gautellet” (hideous despite having been invented by the French) and have gone back to the house with a real state agent to assess the property: and voilá! cinq cent quatre-vingt mille !: c’est pas mal!