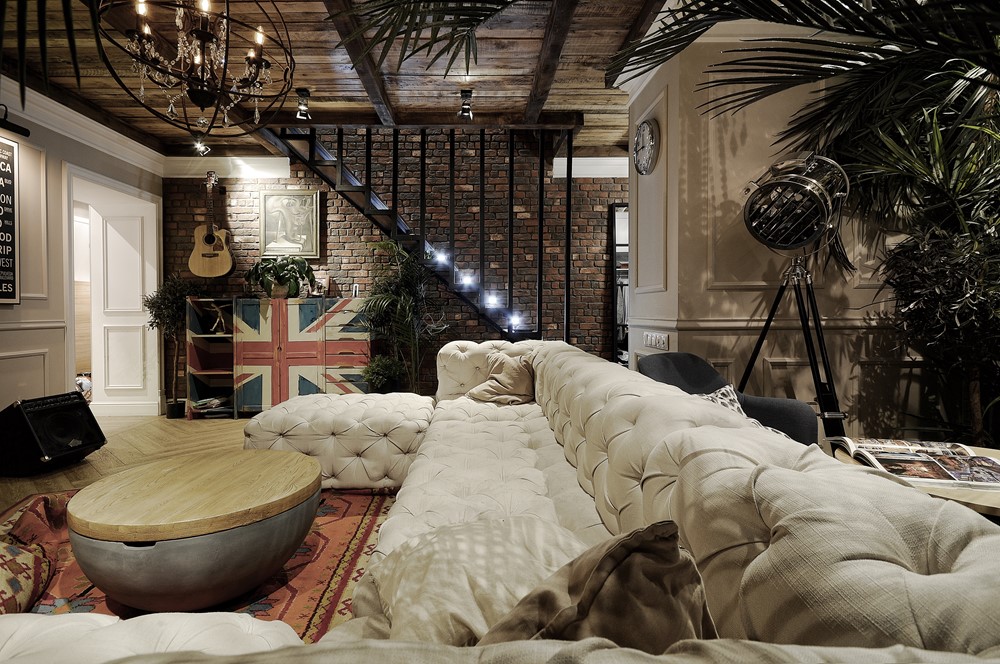 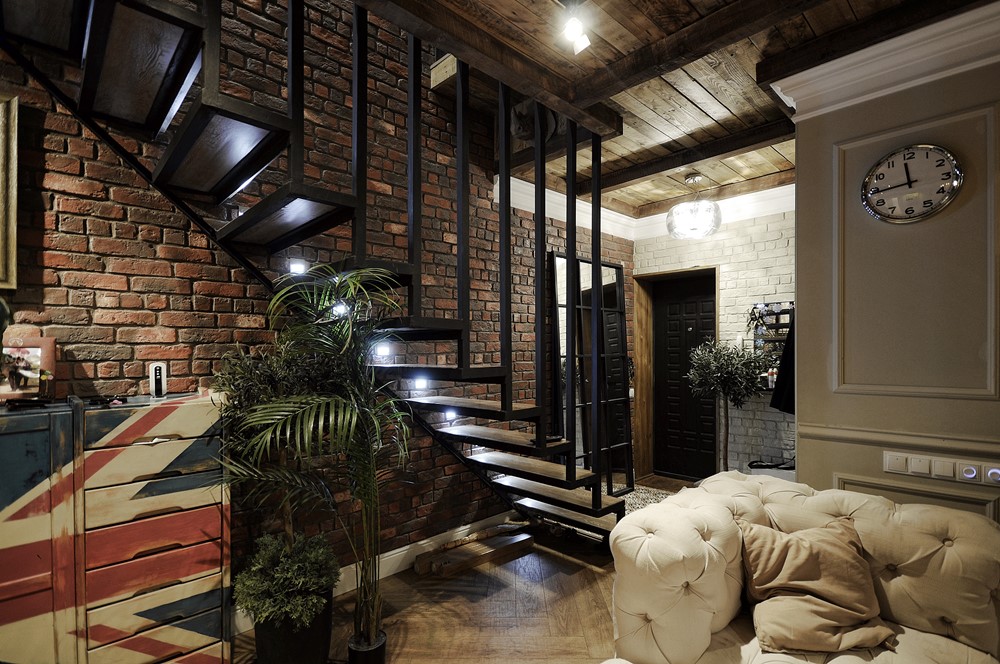 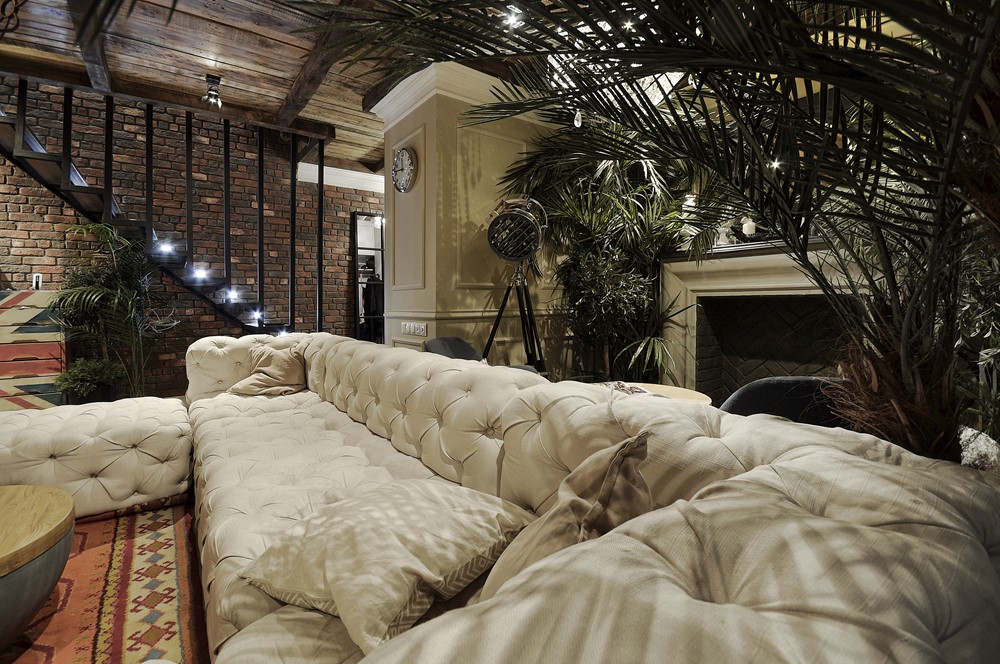 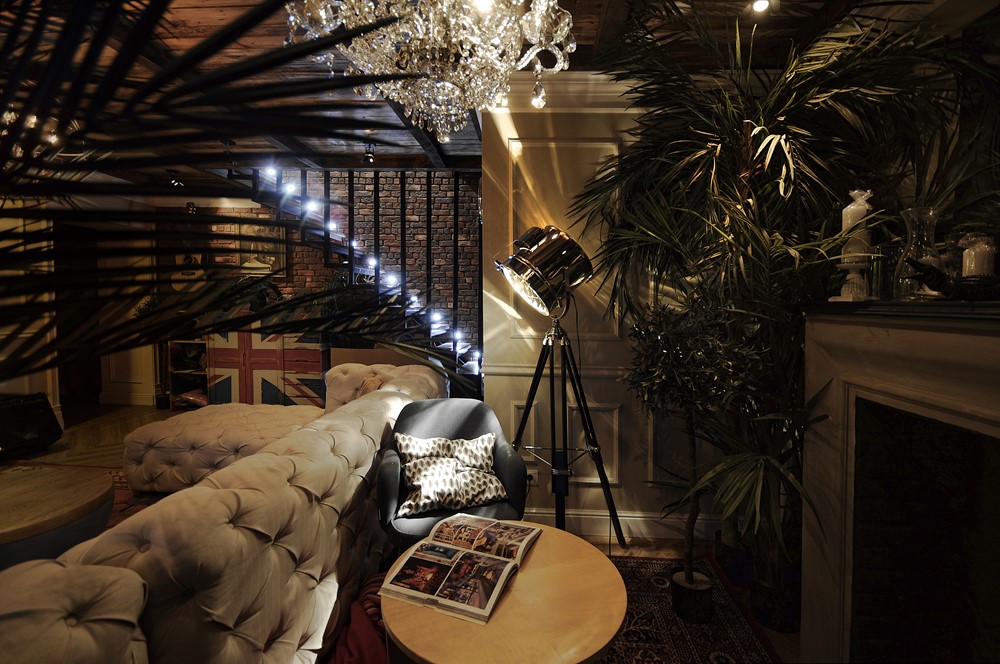 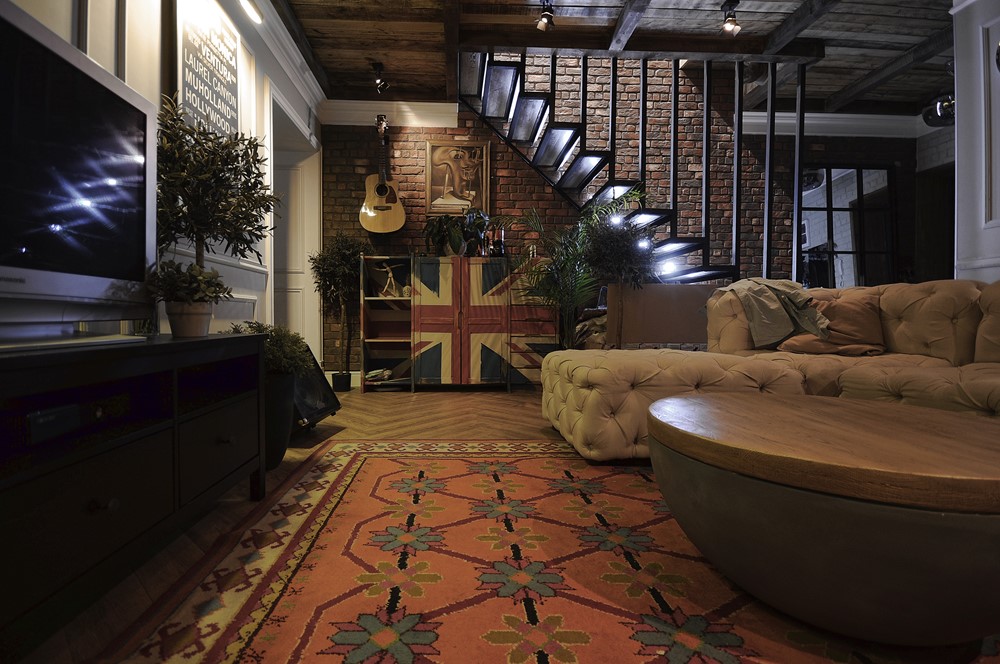 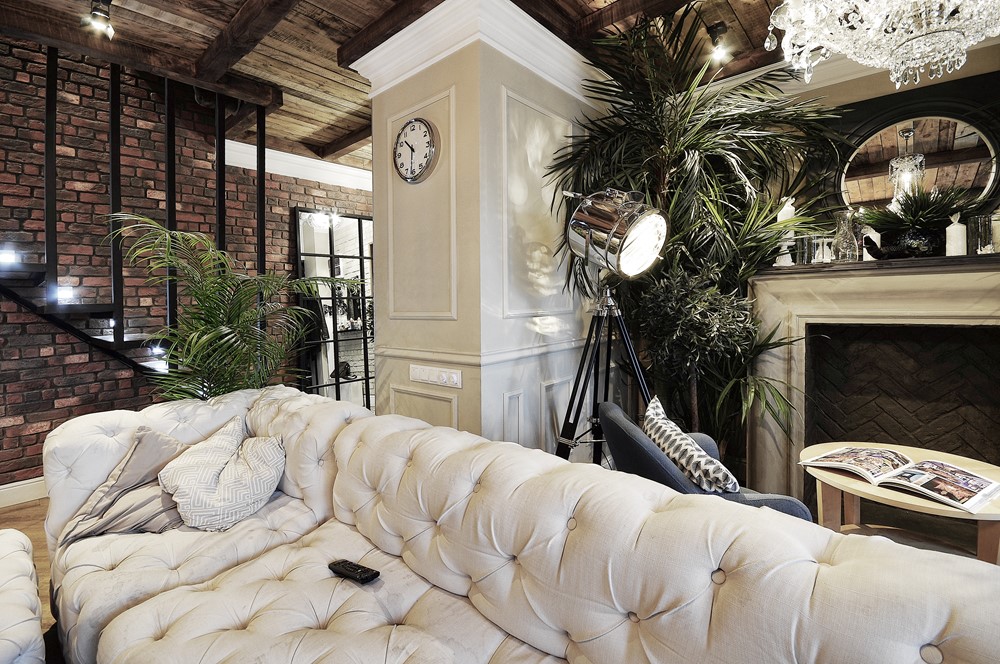 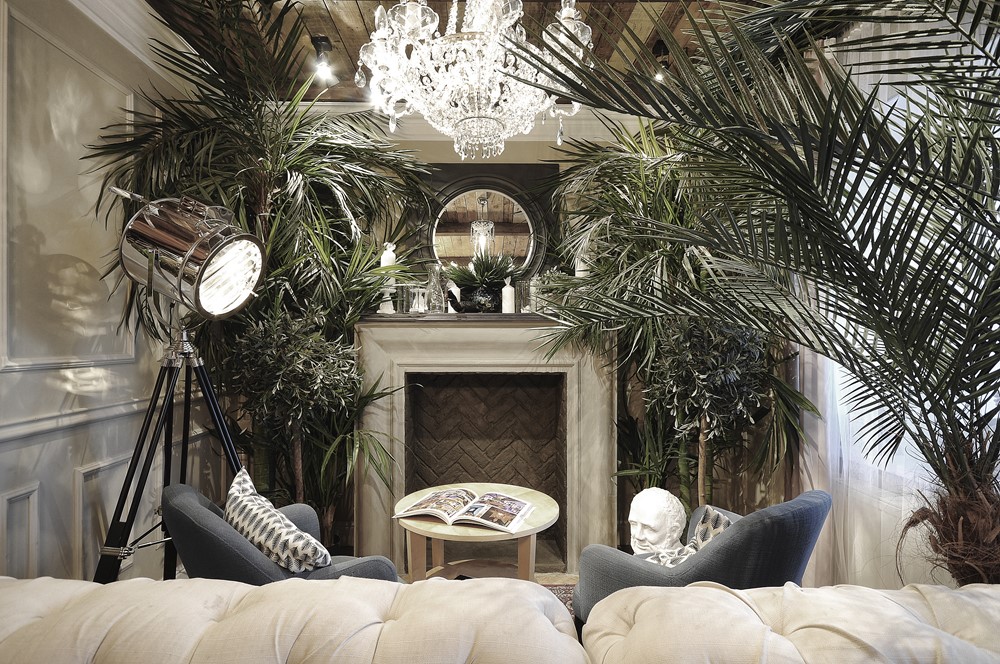 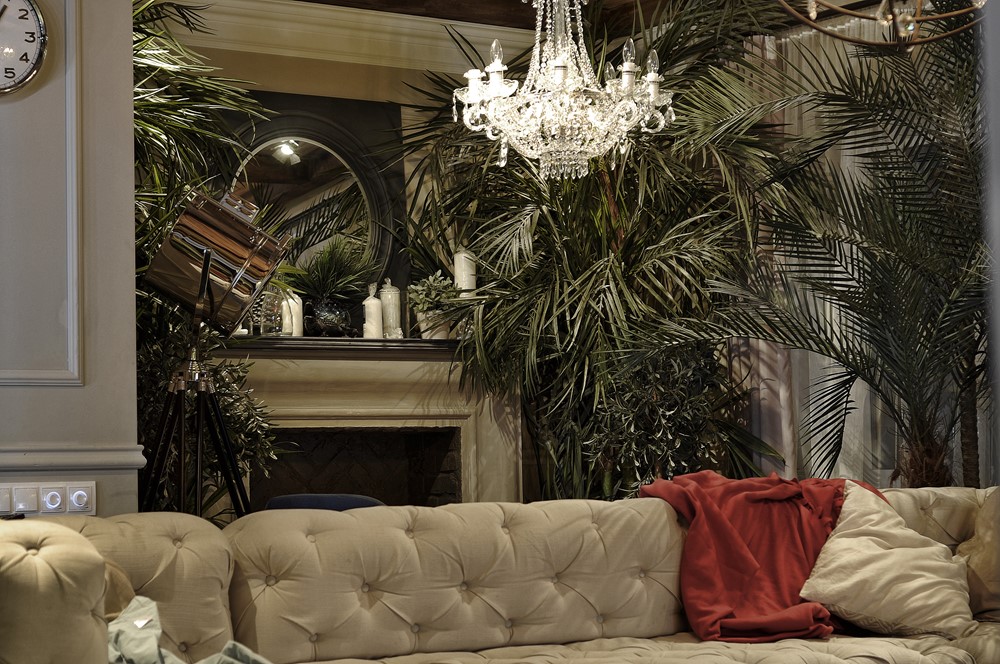 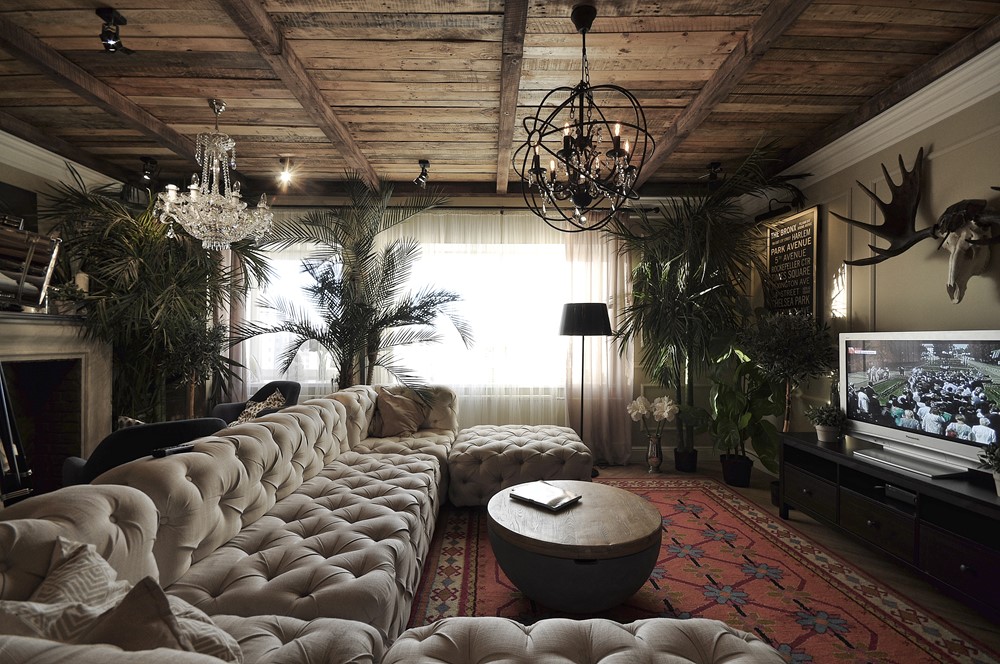 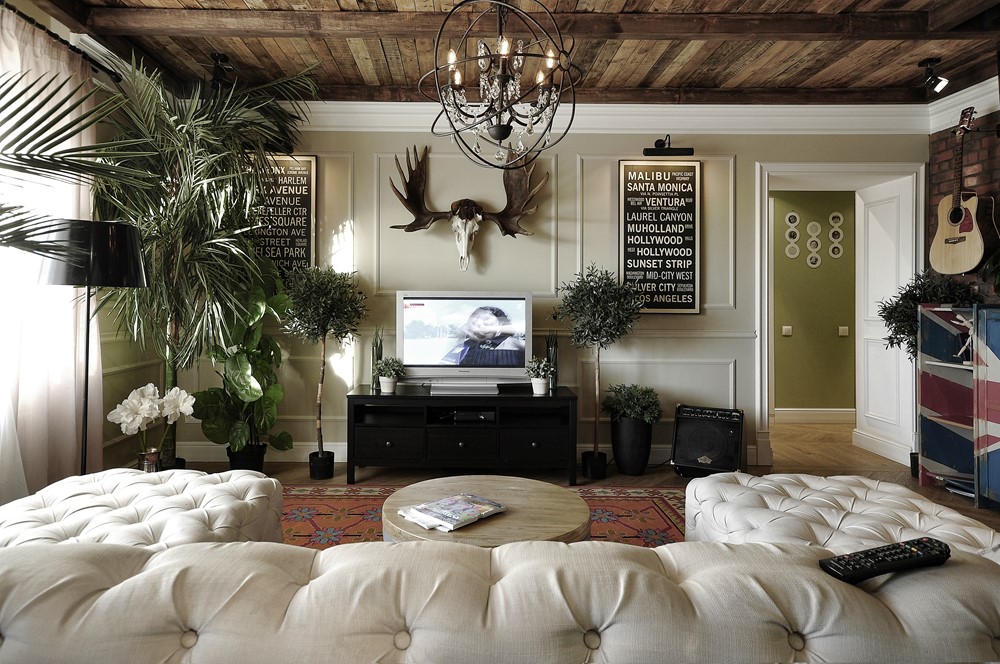 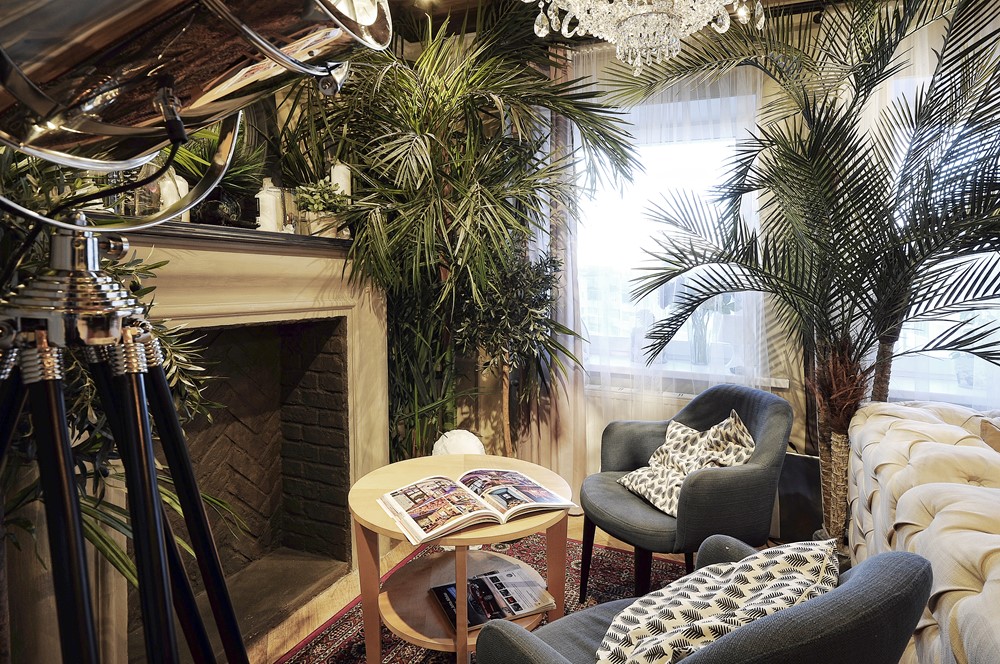 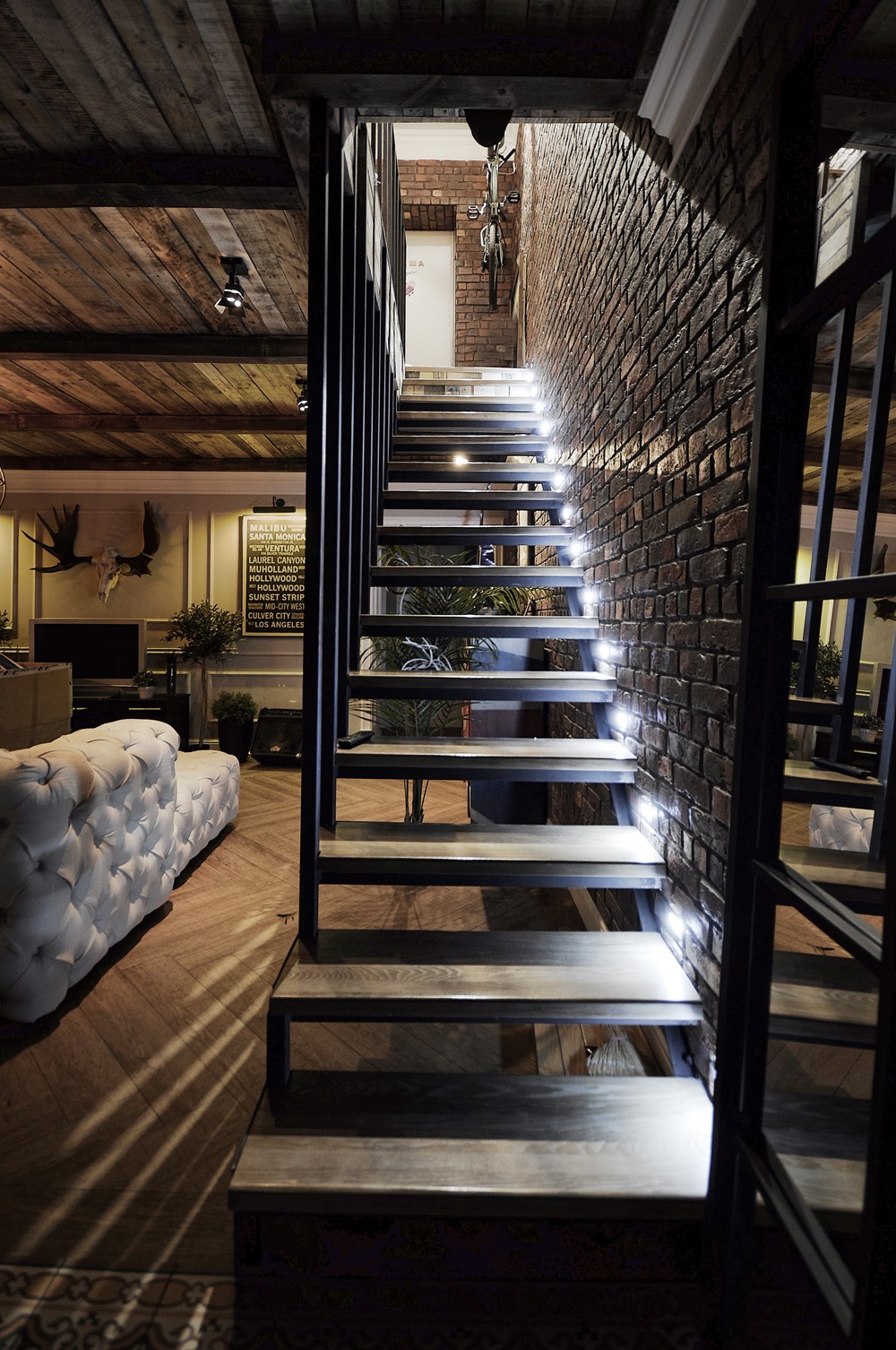 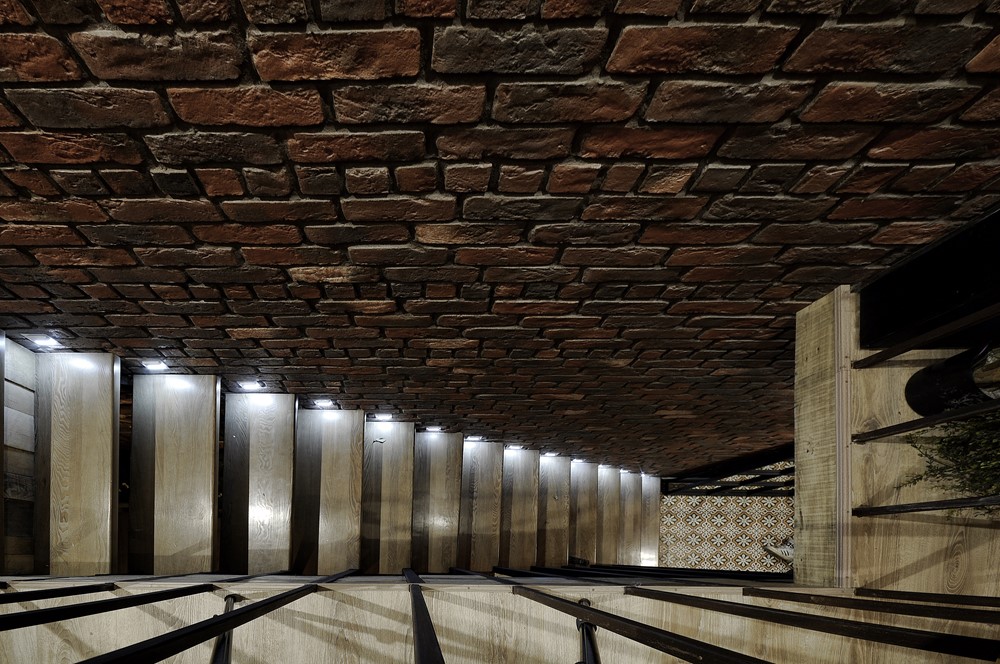 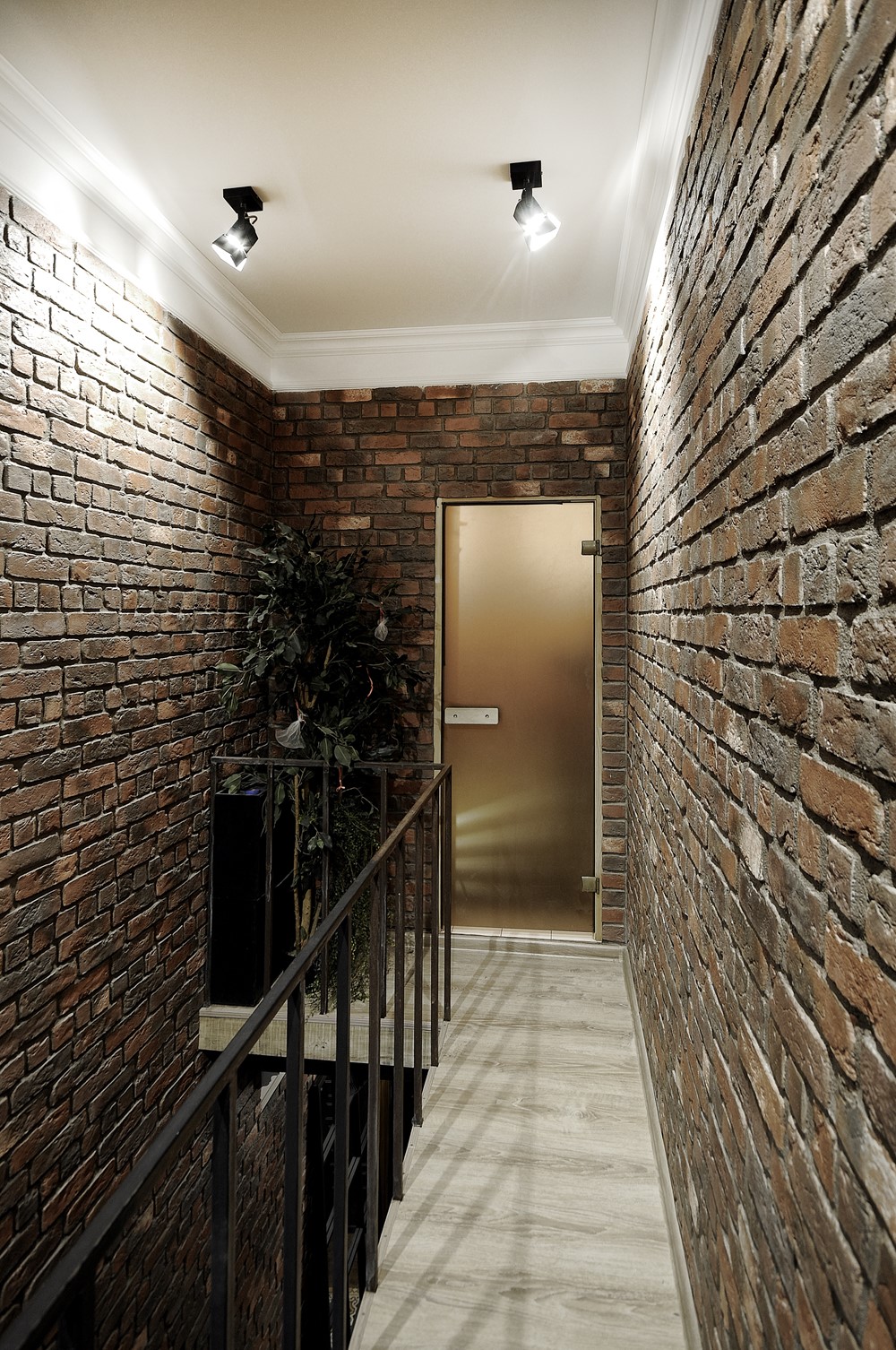 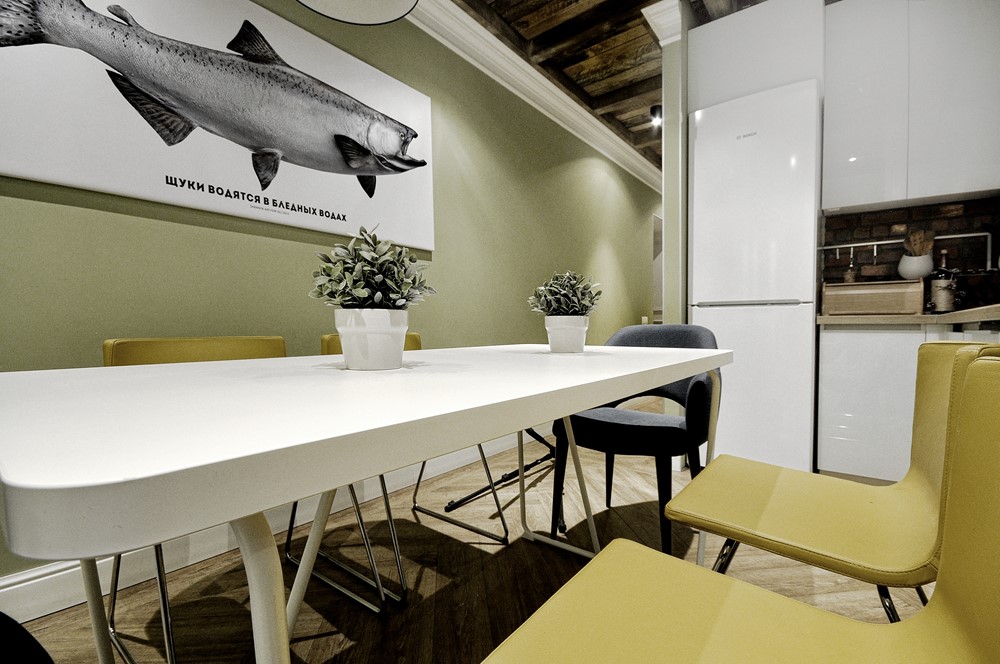 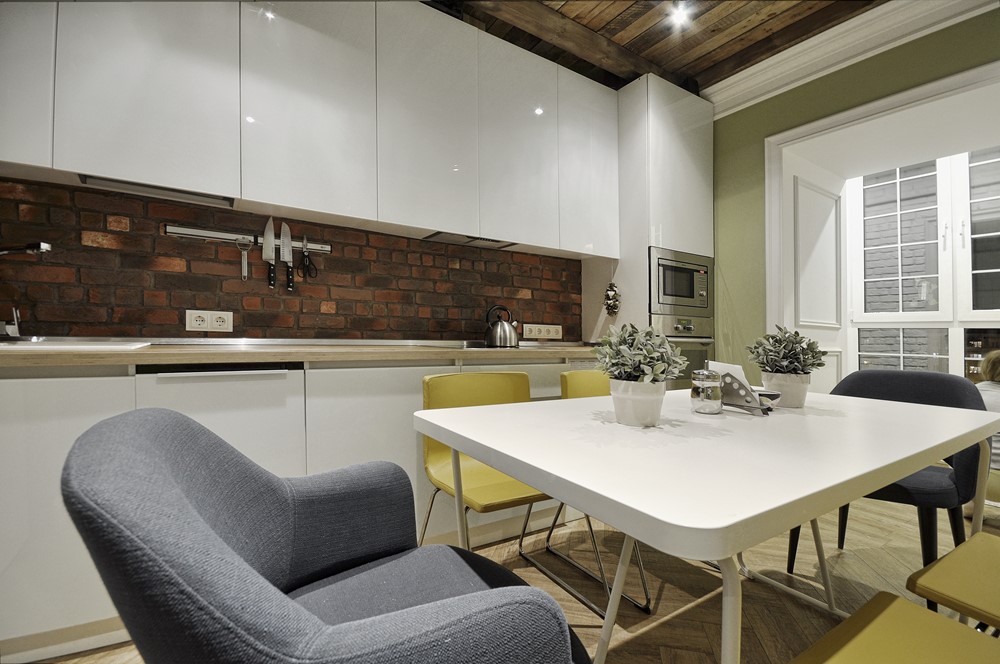 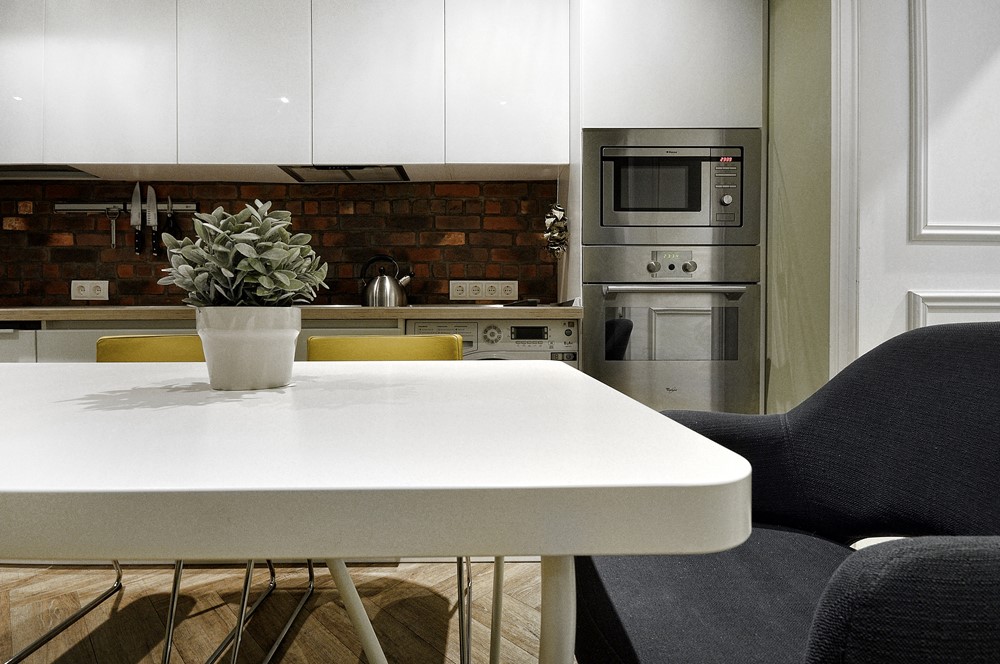 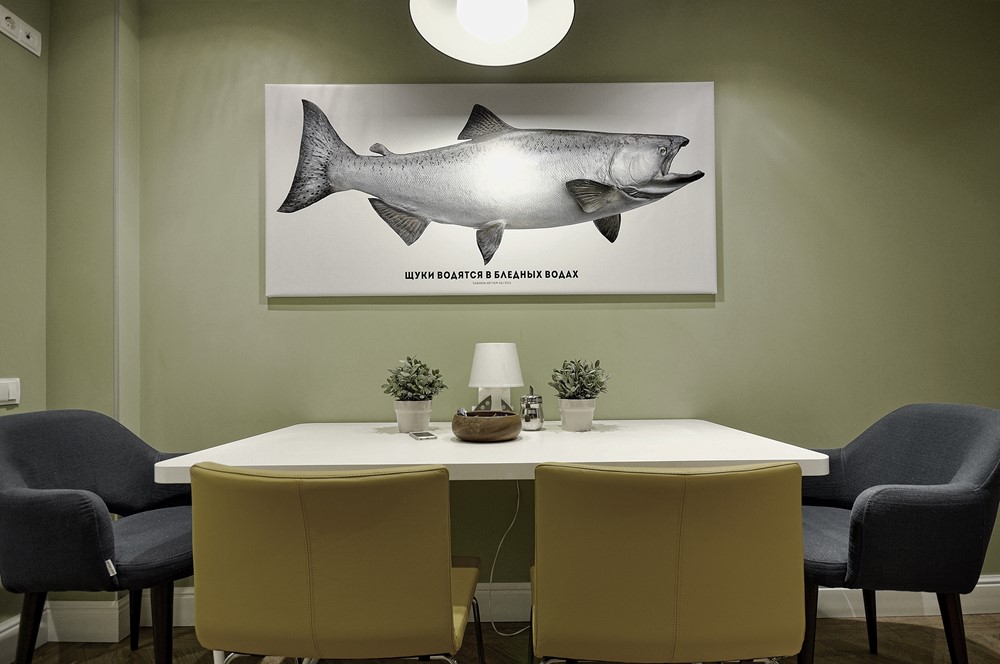 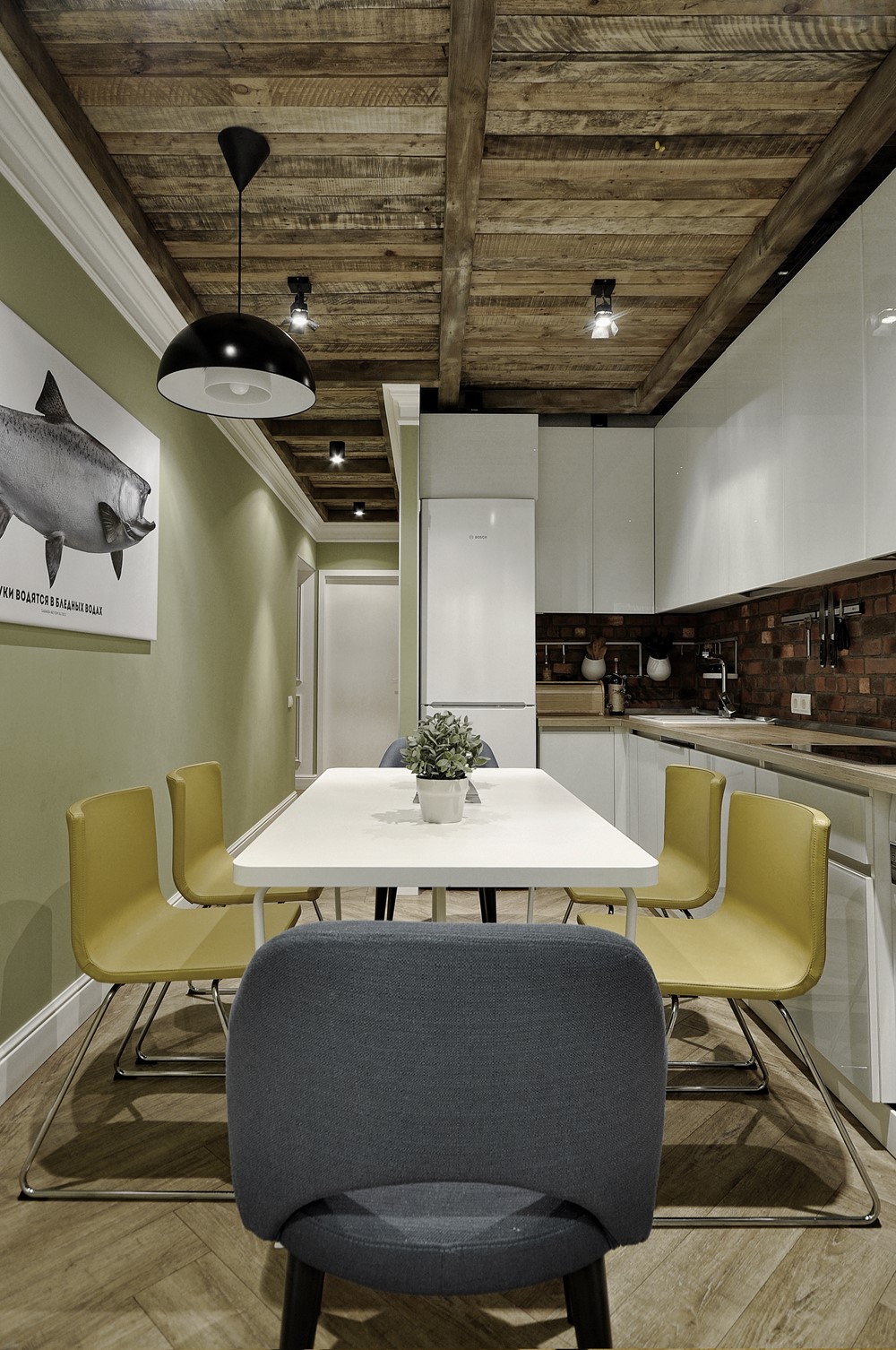 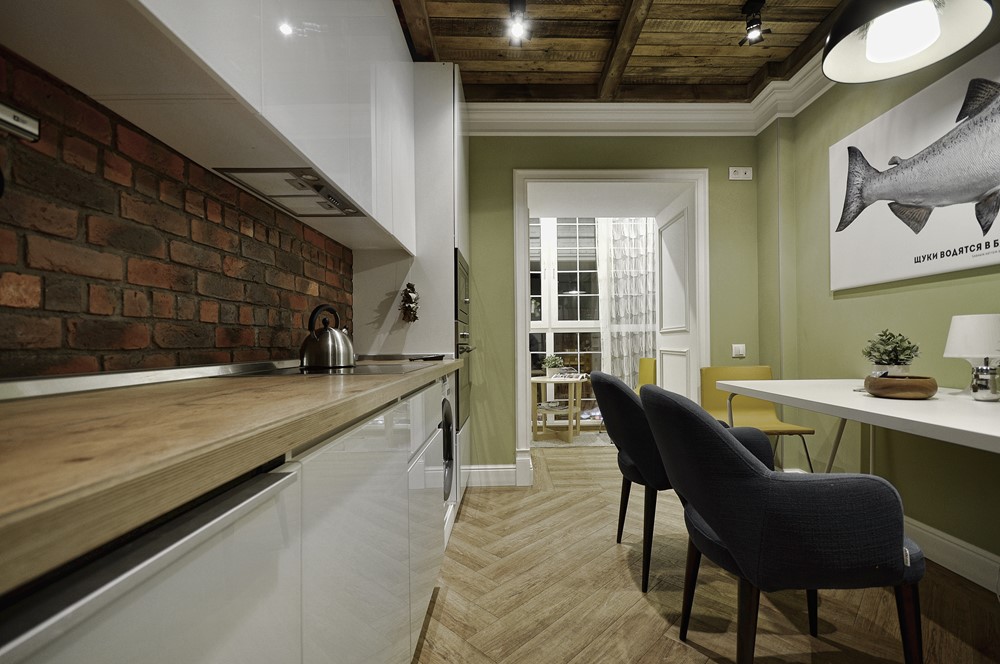 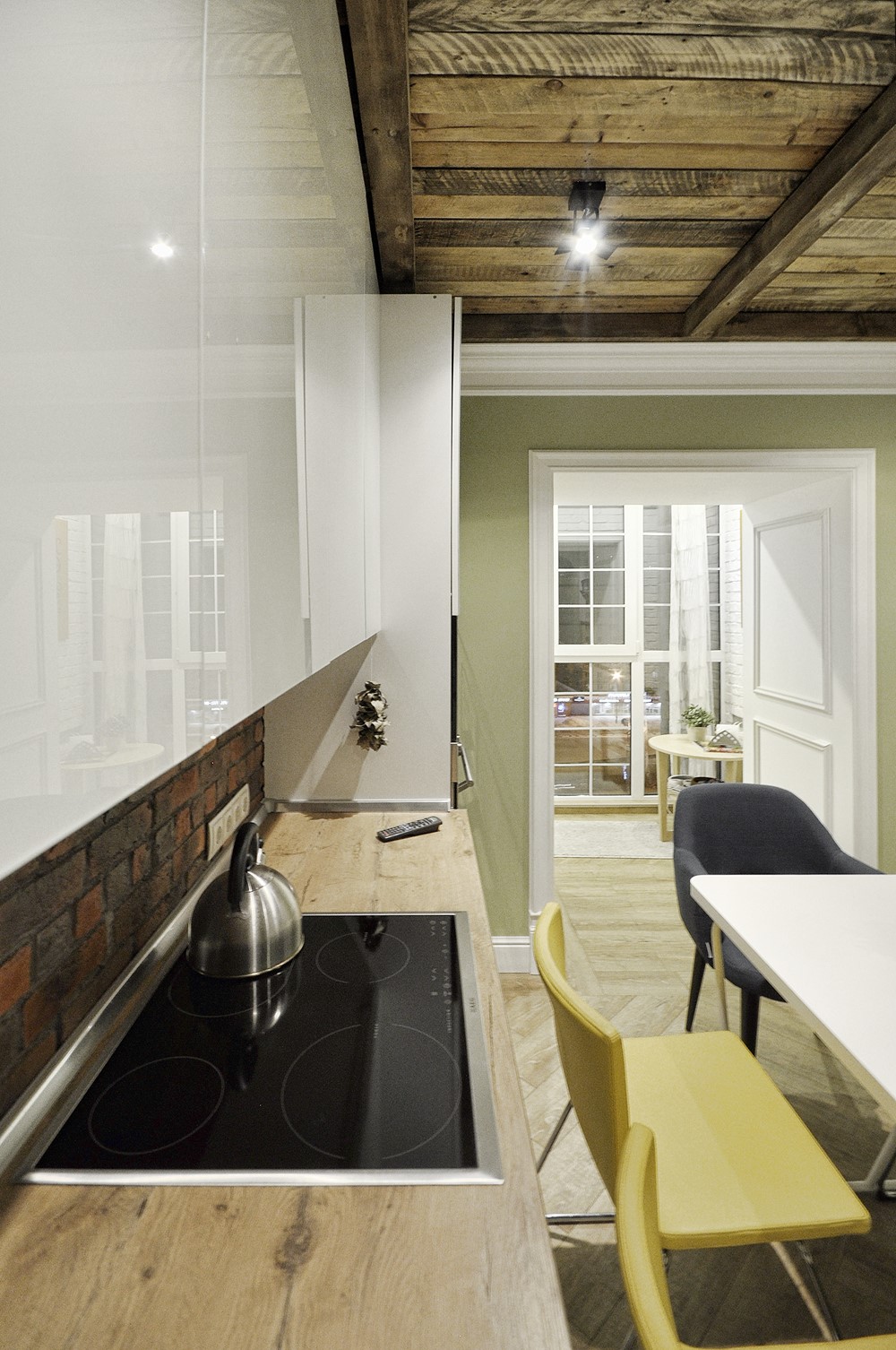 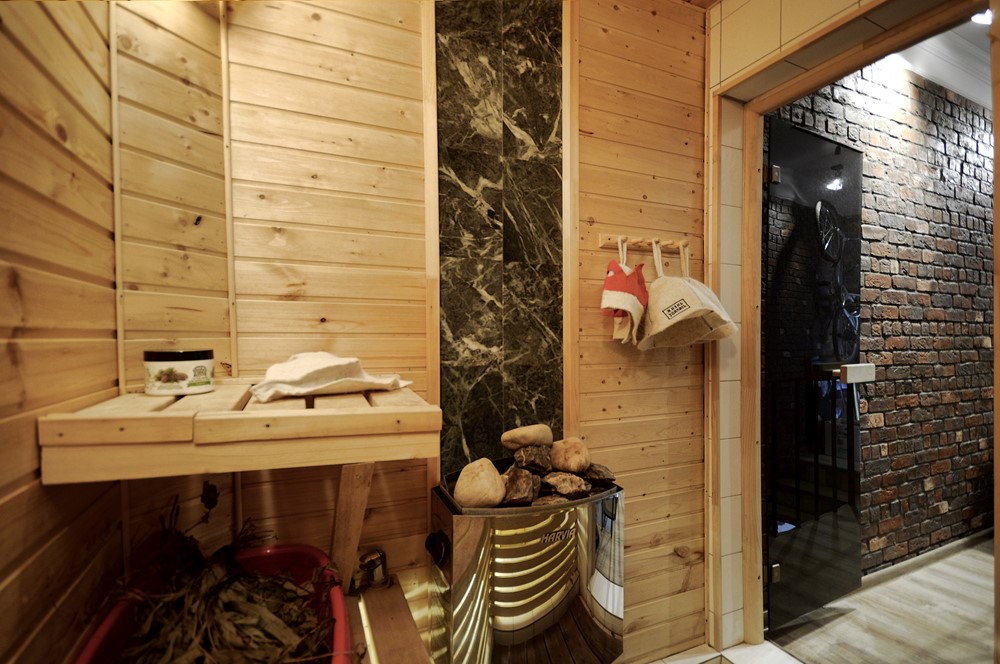 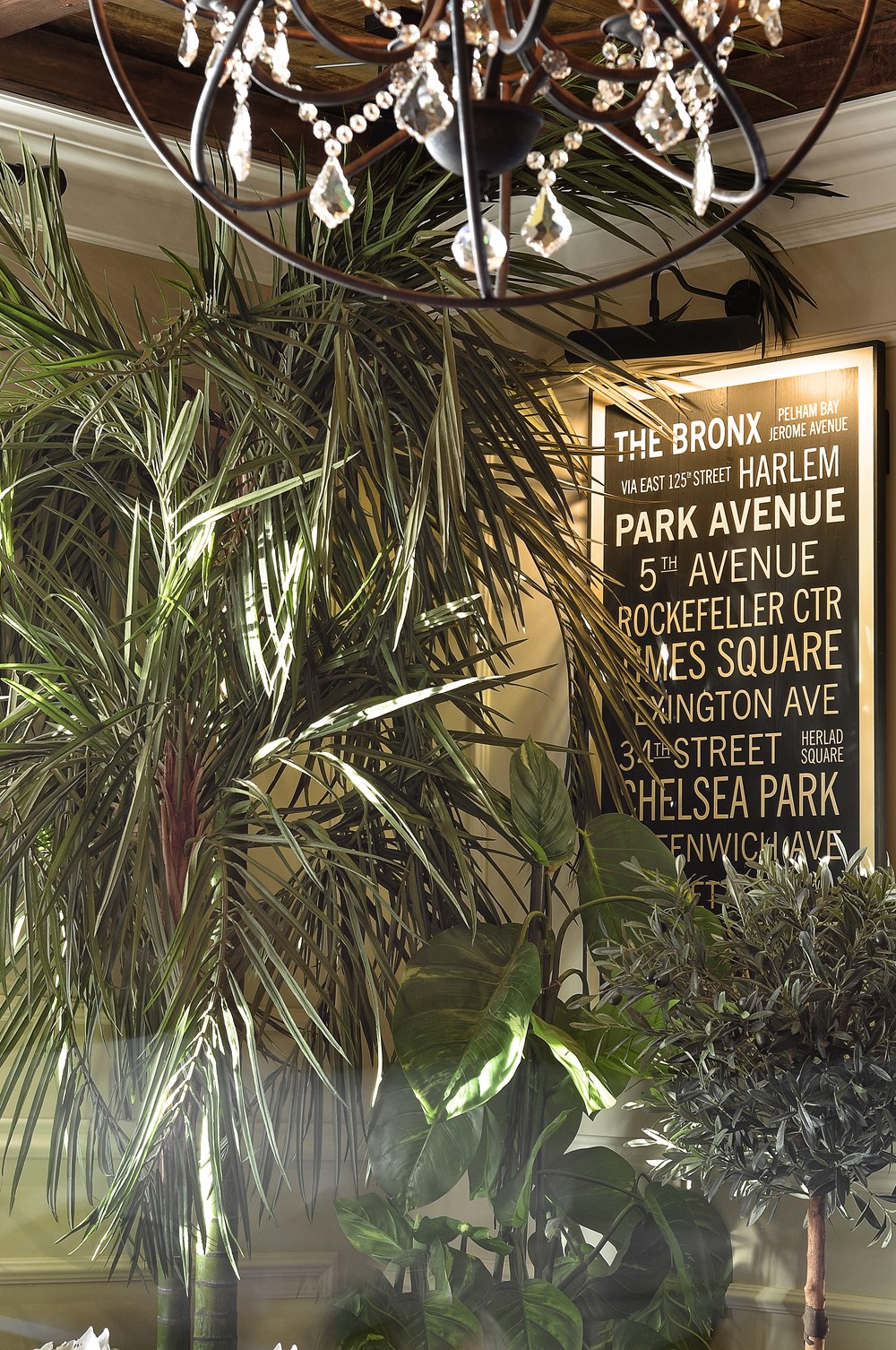 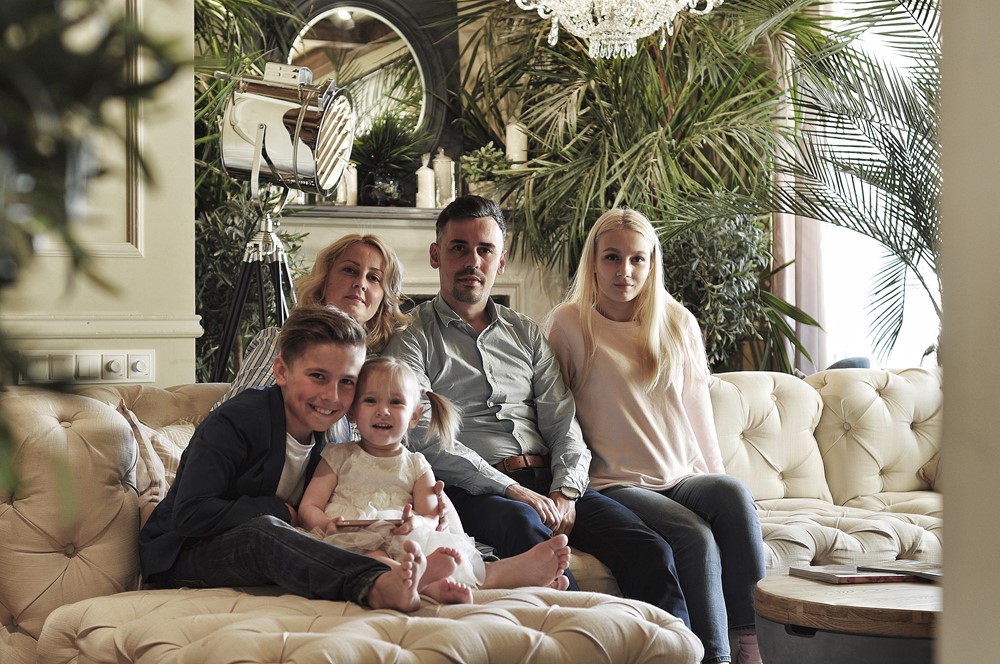 The layout was created from 2 apartments of 10th floor and 11th. Liked the staircase in the interior – it was wooden – which means it could easily be replaced. Just like a large and spacious living room 25m2. It was also convenient to arrange the children’s rooms on the second floor. And there was an opportunity to build a sauna. We all are keen on mountain skiing and after winter trips to sports facilities – and in Permsky Krai there are more than 10 of them, it will be nice to return home and steam (modern stoves today allow you to give out the right steam)
Saranin Artemiy: In the design, for oneself and the family, first of all, the task was to drop in at least some housing. The source of inspiration was materials, or rather, how to apply them – taking into account the budget. The staircase itself is no longer a flat, but a house. To support this vector – we decided to make a ceiling from the Finnish old board, after having processed it. During the construction, the ceiling looked strange. But having in my head the final picture – it is necessary to go to the end. Thus, the ceiling was highlighted by a country house vector. The same material made a brick. This tile – a brick, but pre-cut the tile, I asked the builders to withstand the picture of the masonry, the one that now we see in the photo. It sets a more European character, like the detail itself. Using natural materials – such as metal, stone, wood, I managed to save and make an interior, in which it is always pleasant to come back. The floor had to be made of wood – but it got out of the budget. As a result, I applied vinyl, laying it with a Christmas tree with a perimeter fence.
Ideas appeared during a visit to the construction site. The fireplace was originally supposed to be working on biofuel, but with the birth of the third child – this idea was not realized. There were fears, although there even ventilation is laid down. And the fireplace area itself had to be active, and for today this is a small space where you can work on a laptop with a cup of coffee. Or the little Agate when she draws or molds us in the same room in the daytime – but not before the TV zone. Having a sofa zone in a circle – children really like running around – tables, sofa chairs. Artyom (son) learned to ride Heelys i, circling all zones and maneuvering. Ideas were formed throughout life, always wanted to have
Furniture, for example, in the living room area is planned in such a way – so that it is possible to hold events (earlier we did not have such an opportunity, in view of the limited area). Thus, I designed a 7-meter sofa, consisting of sections. Having mobility for the new year, I collect a large dining table, and the sofa at its full length is properly positioned. And 3 months we live in a different setting (in view of the fact that birthdays and other Russian holidays are tied with the new year).